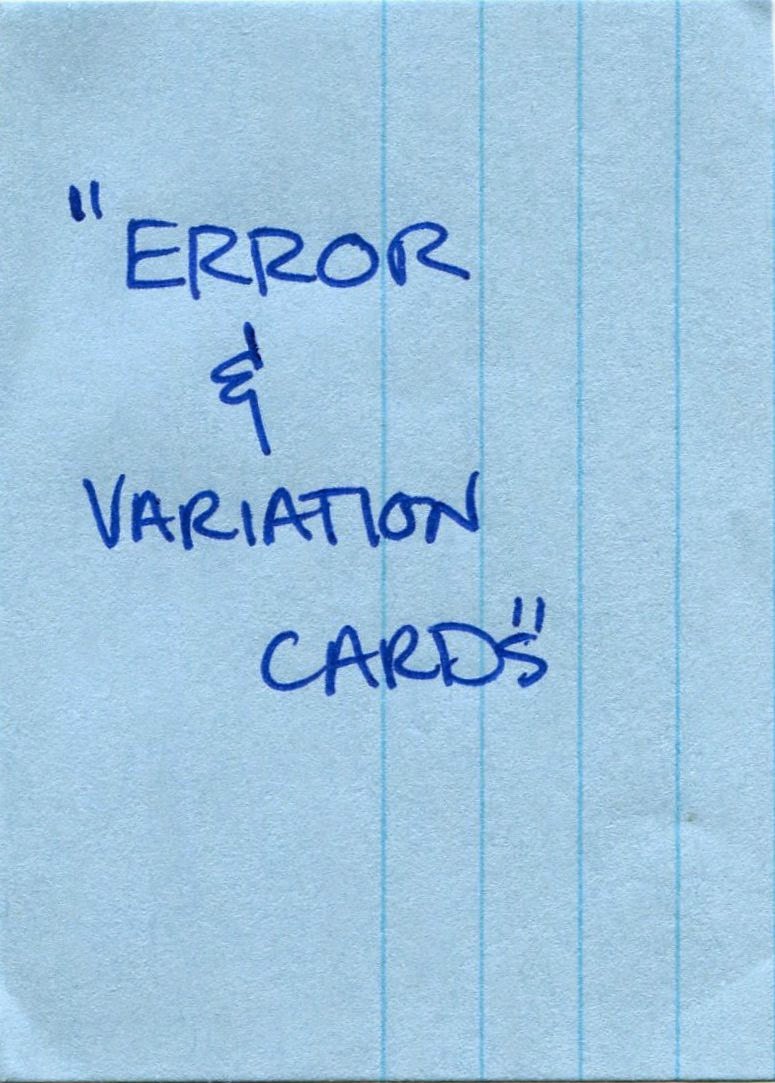 As I noted last night, he divided the stacks of cards into different "acts". The fact that each little section took me down a different path of cardboard made the box all the more fun to go through.

While the throwbacks, bat barrels, and the like were all terrific, one particular section fascinated me so much that I decided to devote an entire post in its honor.

This is one of my mini-collections that doesn't get a whole lot of play. I have most of the more notable ones, such as the Billy Ripken "F^&* Face" error, but I don't find these too often.

Wes, being the great person he is, dug through his collection to find a few classic screw-ups. Some of them were rather minute and probably not easy to find, which made Wes's efforts all the more flattering.

If you read yesterday's posts, don't worry. I won't be talking like your corny high school drama teacher tonight.

Instead, I'll be borrowing another blogger's idea and hosting the first ever Dime Box GAME SHOW! I call it... 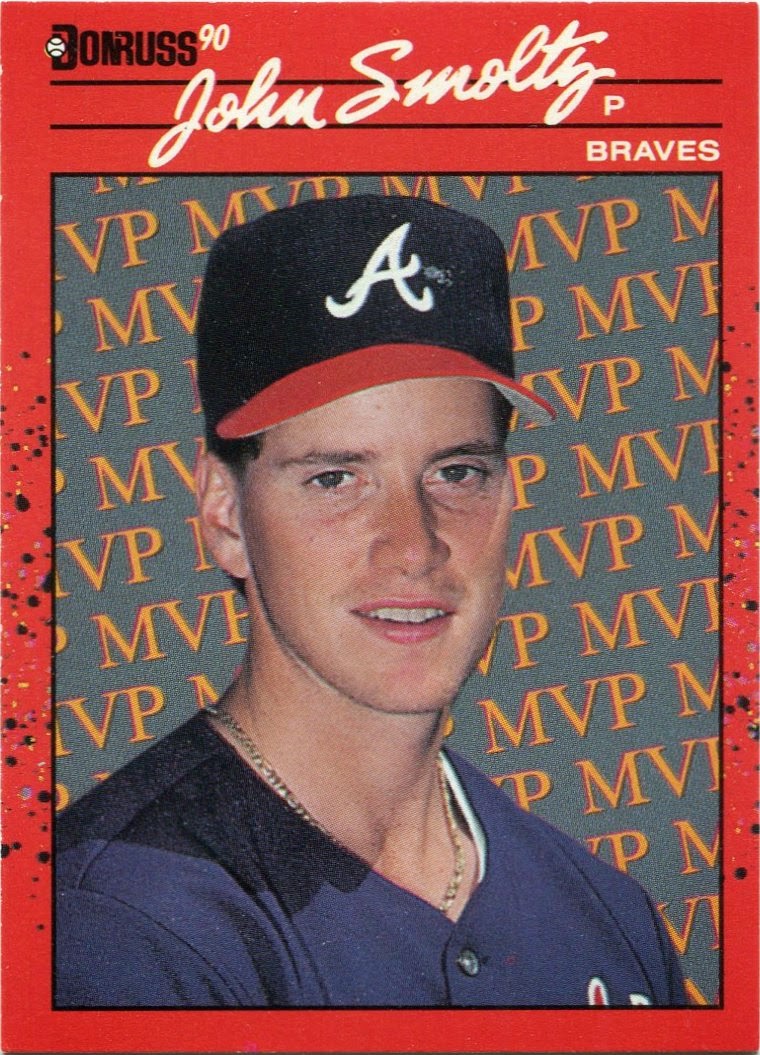 I'll be throwing out error cards I received from Mr. Wes and challenging you, the reader, to, say it with me now...

You'll receive points based on difficulty. Those points can be redeemed for a bunch of great prizes. Including, A NEW CAR! (Not really.)

We'll start you off with an easy one here on SPOT THE ERROR! Give yourself one point if you can find the screw-up on this card.

Answer: The player pictured is not John Smoltz. It's Tom Glavine.

Was it corrected? Yes. According to my big book o' cards, a 1990 Donruss "MVPs" #BC-12B was released featuring a corrected photo of Smoltz.

One point for everybody! 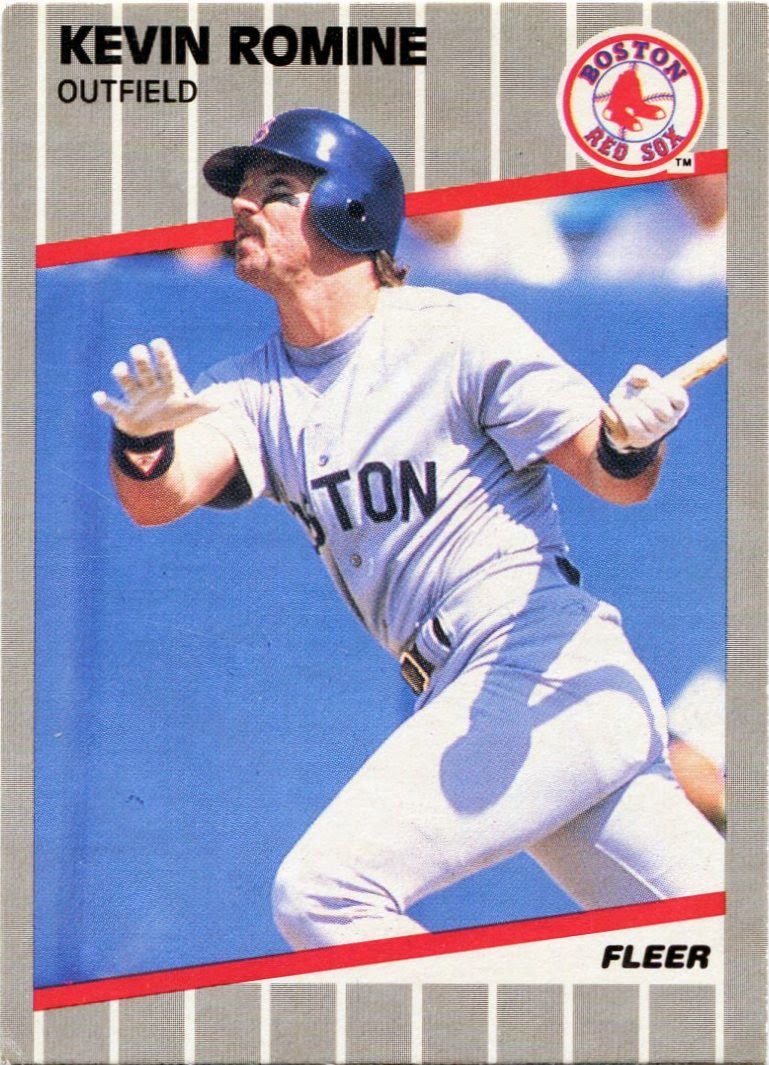 Our next contestant comes from the always ugly 1989 Fleer!

Was it corrected? Yes. 1989 Fleer #98B has a corrected shot of Romine himself.

A big round of applause for anyone who got that one right. 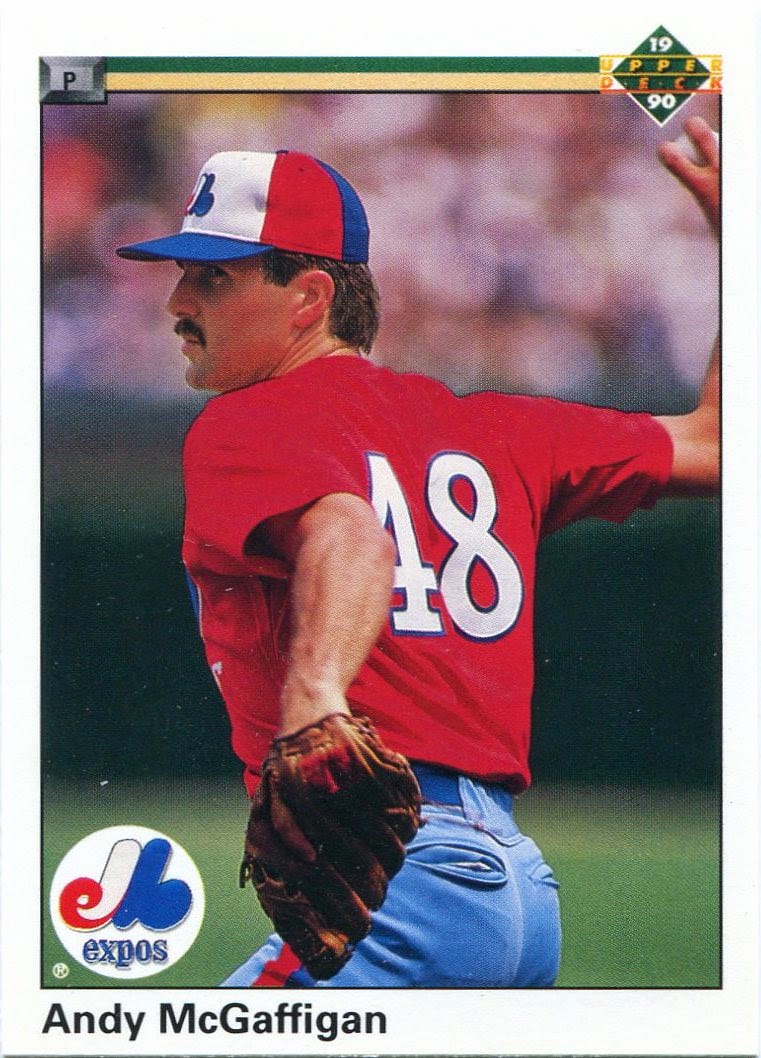 While looking through the checklist, I found that 1990 Upper Deck is chock full of errors.

I guess UD didn't pay their fact checkers all that well.

Okay, you know how it goes by now.

Another three points for anyone who can SPOT THE ERROR!!!!!!!!!!

Was it corrected? Yes, again. McGaffigan is featured on card #597B from 1990 Upper Deck.

No commercials on the Dime Box Network! 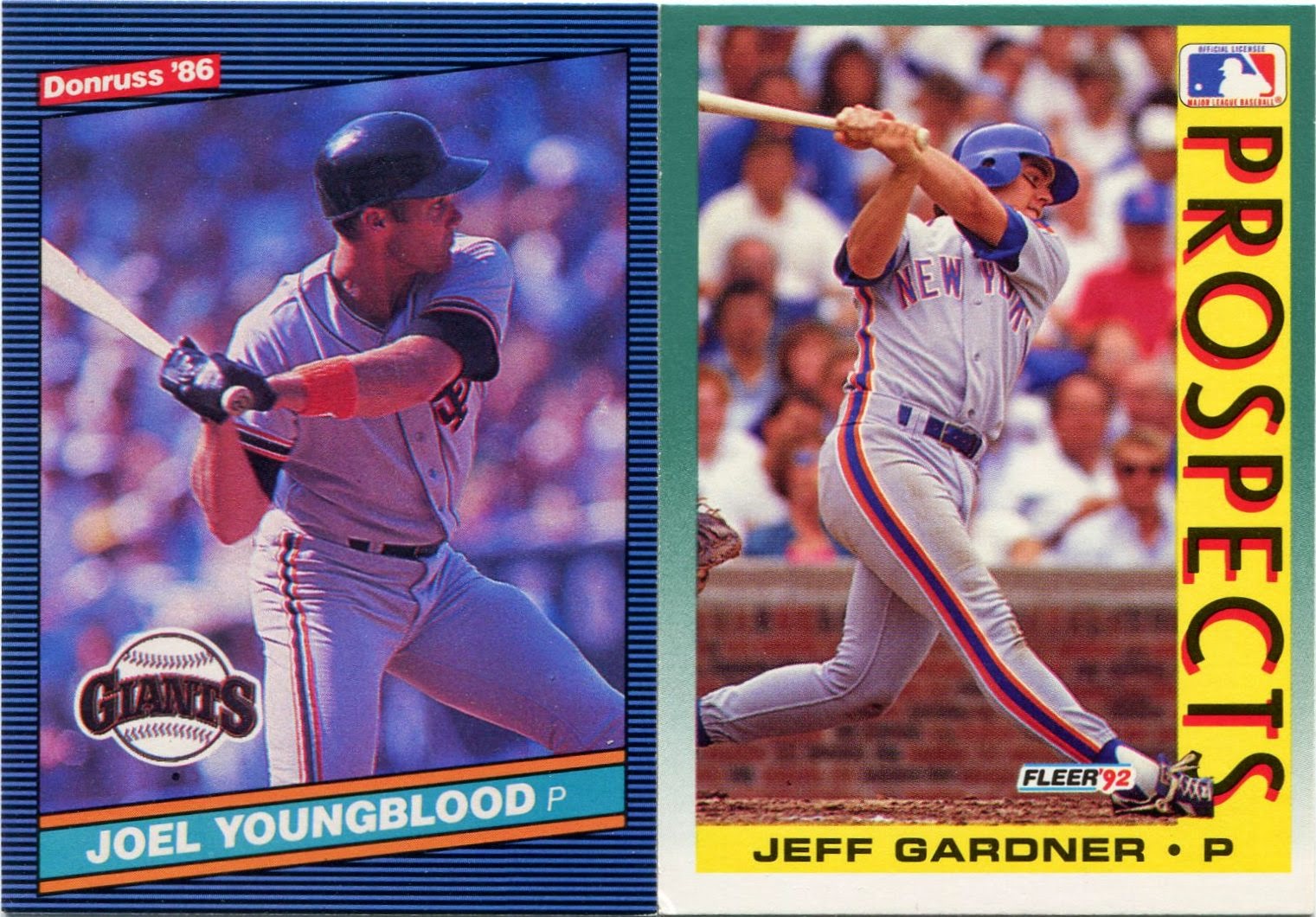 Let's move right into Round 2.

Hear that bell? Any correct answers in this round are worth double the points! Why?

Back to our game. One point a piece if you can catch the screw-ups on these two cards.

Hint: They both feature the same type of error.

Answer: Neither Youngblood or Gardner were pitchers, as listed. Both were basically utility players.

Since it's the bonus round, give yourself four points if you answered both of those correctly. 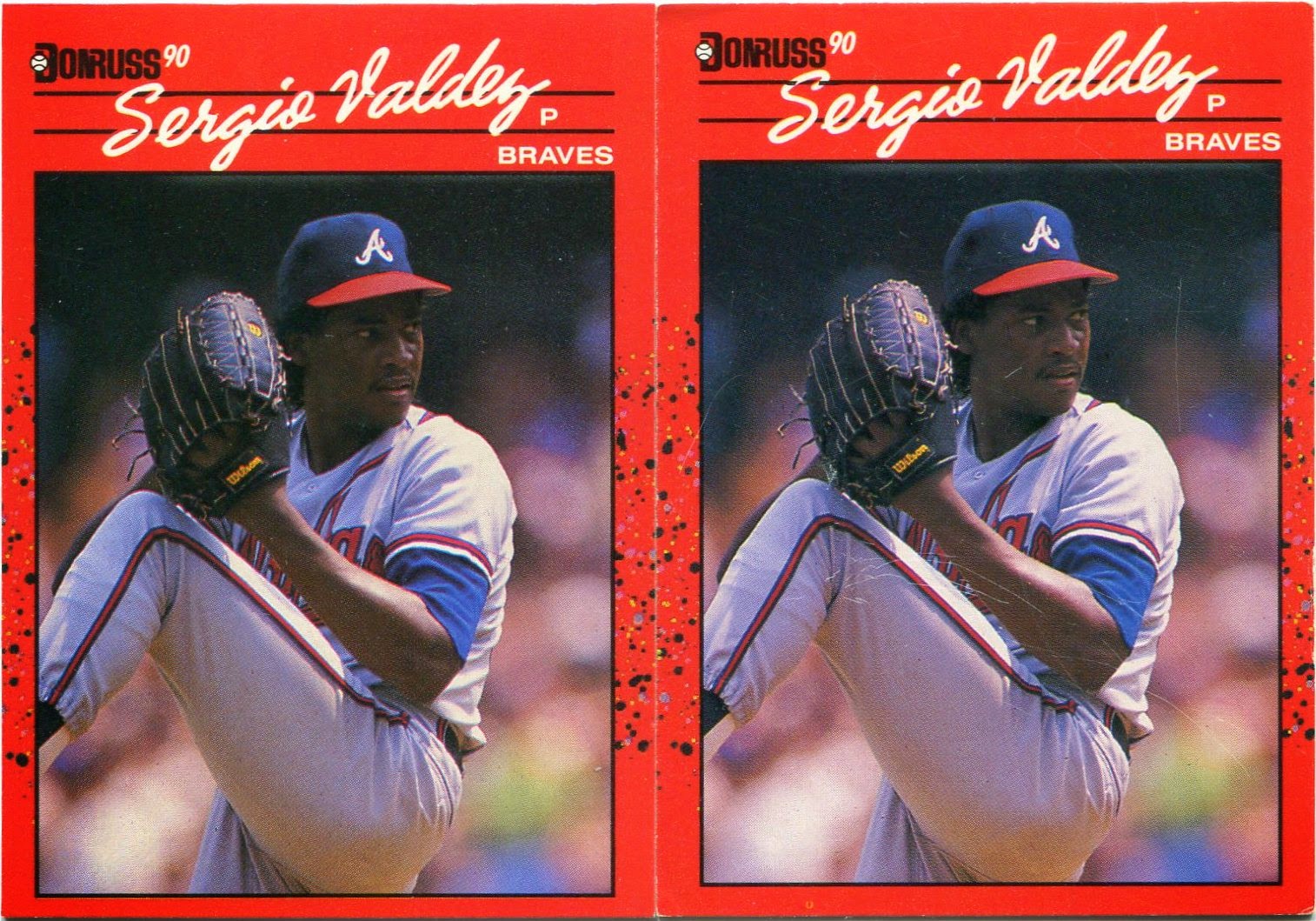 Errors can be downright silly sometimes.

Wes sent along both the wrong and the right versions of this particular card. Had I not looked it up, I would've never spotted the screw-up in a million years.

But let's see if you can.

I'm offering up five points to anyone who can catch this silly mistake.

Answer: According to my big book, the card on the right is an error because one of the black lines on top is crossing through the "S" in Sergio Valdez's name.

Was it corrected? Yes. Donruss went out of their way to correct this seemingly minor error.

Ten points to anyone who spotted that error! 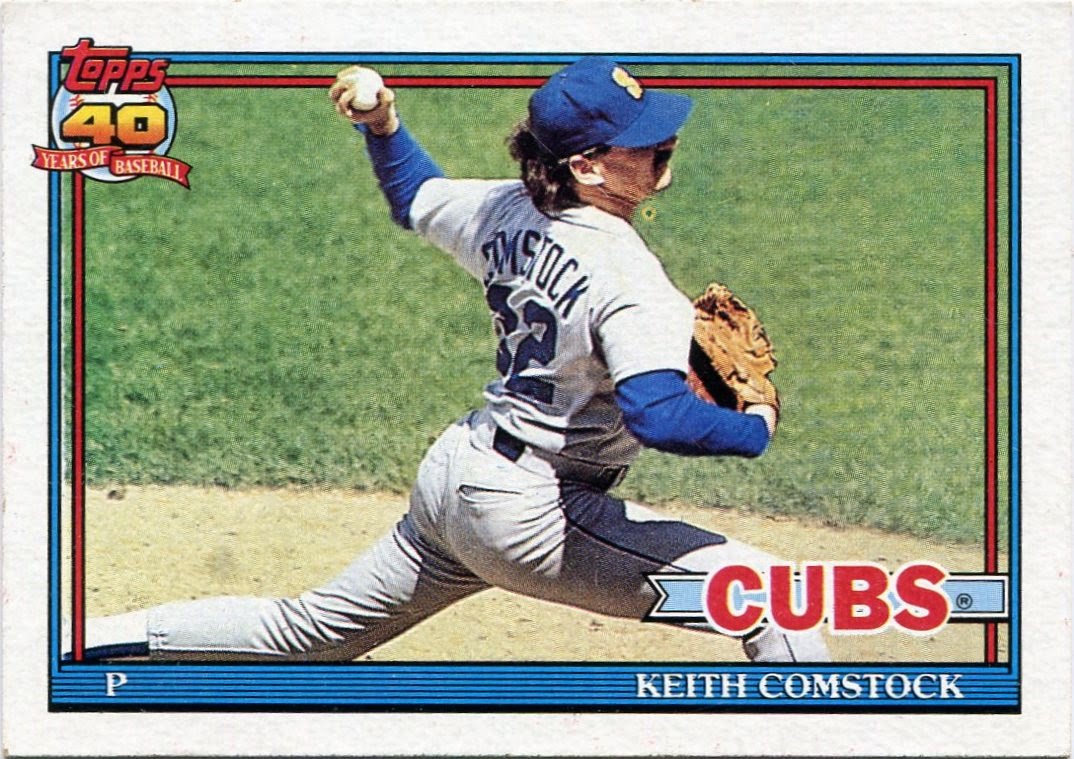 We'll end round two with a fairly easy contestant.

Even Topps is prone to screw-ups at times. This is an error that I couldn't believe I didn't already own.

Can you spot it?

There's two points in it for you if you can.

Answer: Mr. Comstock is clearly wearing a Mariners cap, yet he's listed as a Cub.

Was it corrected? Indeed. 1991 Topps #337B correctly features the Mariners logo.

Give yourself four points for a correct answer there. Because, you know, bonus round!

We've had a possible 23 points so far.

How many do you have? 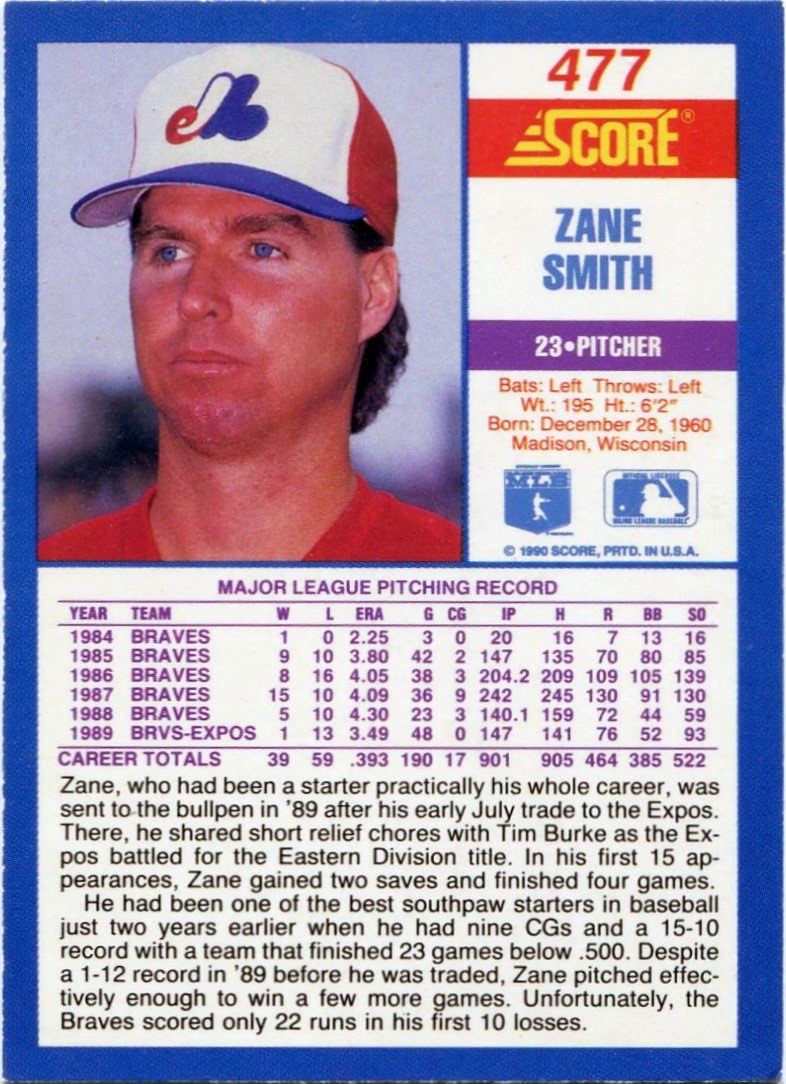 We're into the final round now.

Here, we'll be focusing on some of the errors companies have made on the backs of their cards. With all the numbers and stats and stuff, I'd think the flip sides would be more prone to screw-ups.

We start with Zane Smith, a man who probably isn't going to win any beauty contests.

But, here on SPOT THE ERROR!!!!, you have a chance to get five points from finding Score's mistake.

Oh, we're not done with Score yet. 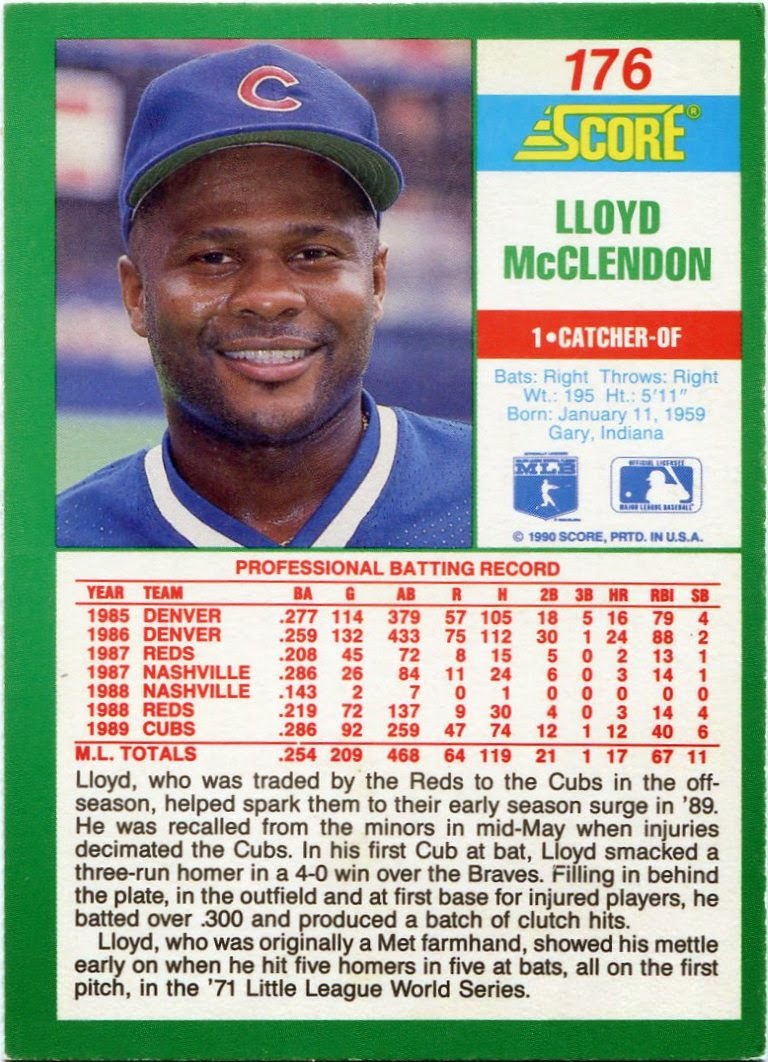 Wes sent over yet another screw-up from 1990 Score.

Lloyd McClendon is the Mariners skipper here in 2014, but he received a coveted error card twenty-four years ago.

Can you spot it?

You'll probably have to really know your Cubs history to get this one.

Answer: In the red box underneath the nameplate, McClendon is listed as wearing #1 for the Cubs. He actually wore #10.

We've bagged on you enough. 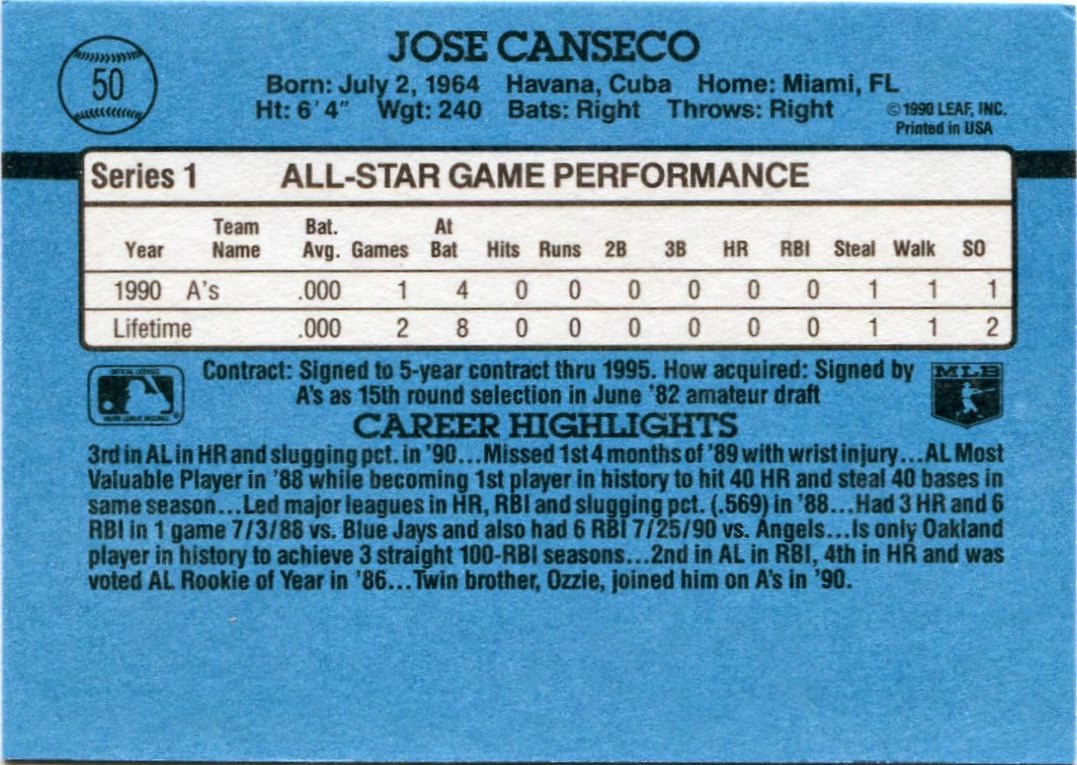 Let's take a look at Donruss.

Not only is 1991 Donruss downright ugly, but it features a decent amount of errors as well. Jose Canseco was the target of one on his All-Star card that year.

I'm giving out ten points for anyone who can SPOT THE ERROR!!!

Answer: Because this is an All-Star card, the team in the stat box should be listed as A.L., not A's.

Was it corrected? Of course. 1991 Donruss #50B features the standard A.L. listing, although I can't find a photo of the corrected version.

My people are telling me that we're short on time, so let's get to the final pair of screw-ups here on SPOT THE ERROR!!!! 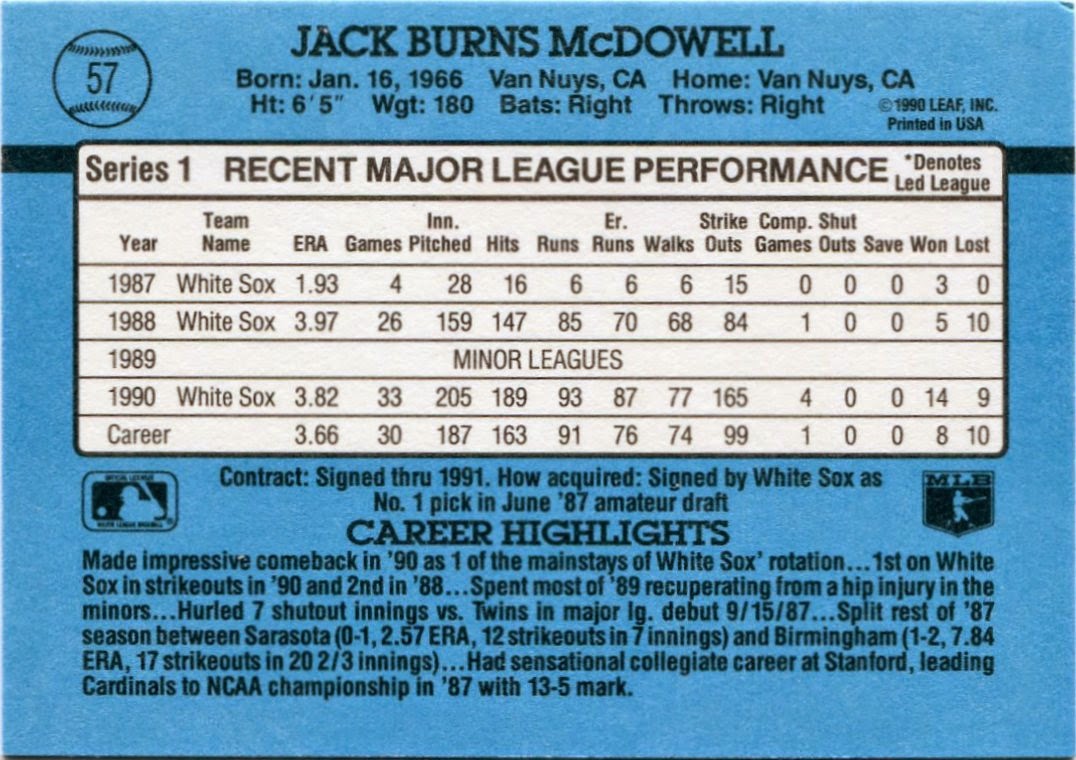 Another contestant from 1991 Donruss!

Take an additional ten points if you can find the mistake on this one.

Hint: Your math might have to be good to spot it.

Answer: McDowell's career stats at the bottom do not include his 1990 numbers. He won 14 games in '90, yet his career total still says 8.

Here comes the last one. 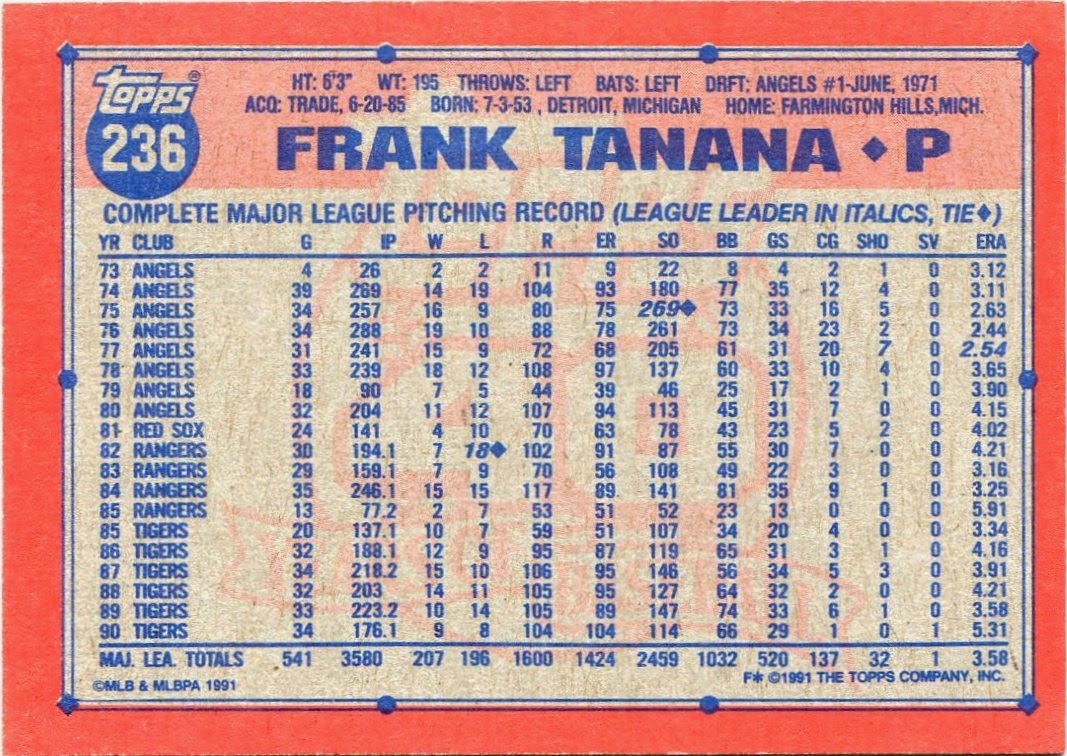 If you get this one, you automatically win.

It's like the million-dollar question on Who Wants to Be A Millionaire?. I can't give away a million dollars, but you'll be the proud victor of SPOT THE ERROR!!! if you find it.

Hidden somewhere in all those stats and numbers is a single, solitary error.

This is for the game.

Answer: Frank Tanana did not tie for the league lead with 269 strikeouts in 1975, as the diamond indicates. He led the league outright.

What have we learned?

Even card companies are prone to mistakes every now and then. And they go out of their way to correct even the smallest of screw-ups.

Well, that just about does it for the pilot episode of...

Another big round of applause to Wes for taking the time and effort to find all of these great cards.

Thanks for playing!
Posted by Nick at 6:49 PM

The winner should get a fishing trip with Billy Ripken!

Great post. I love errors and variations, but dang... this game was tough. I was only able to figure out three without looking at your answers... the Glavine, the Youngblood, and surprisingly the Valdez (although I focused on the lines immediately).

27. Not bad. Although I did find it fishy that all 104 of Tanana's runs allowed in 1990 were earned. Thought that might have been the error, but it checks out.

The bigger error on the Gardner card is that the photo is Chris Donnels! See my interview with him: http://borosny.blogspot.com/2010/06/jeff-gardner-points-out-errors-on-his.html