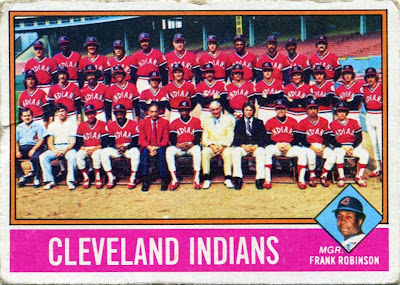 It's been nearly two months since the last installment of this series, but I'm happy to present a new Short Term Stops roster to all of you tonight.

I'm not as reliant on my themes on this blog as much as I once was, but I still get a huge kick out of these. They're still some of my favorite posts to write.

I can't say I have any sort of investment in the Indians one way or another, but compiling their Short Term Stops roster was a thrill nevertheless. That's part of the beauty of these posts. 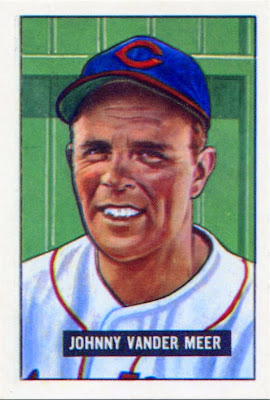 We start with a rare one-game wonder.

Johnny Vander Meer, of course, is best known for achieving the unthinkable feat of spinning two no-hitters in a row as a member of the Reds in 1938. After a few mediocre years near the end of his career, Vander Meer found himself with the Indians in 1951.

His only game with Cleveland would be the last he'd pitch in the bigs. Vander Meer gave up six runs in three innings in a loss to the Senators on May 7th, 1951. He was sent to the minors and released soon after.

He's understandably more remembered for those back-to-back no-hitters here in 2015. 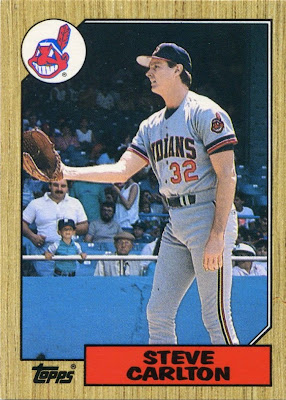 Steve Carlton's end-of-career travels have been well documented on this blog.

This is the second time "Lefty" has made a Short Term Stops roster, and it probably won't be his last because of how much he bounced around in the late '80s. Carlton went 5-9 with a lofty 5.37 ERA in his 23 games with the 1987 Indians before being traded to the Twins.

The (then) future Hall of Famer doesn't look to pleased on his '87 Topps Traded card, but it's one of my favorites.

It's darn near perfect for someone who loves crowd shots as much as I do. 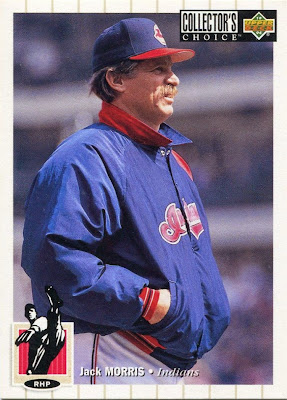 Jack Morris seemed to have the magic touch.

He spent 14 star-studded years with the Tigers. He was a postseason hero in his lone season with the Twins. He won 21 games in his first of two years in Toronto. The only place he didn't have much success, it seems, was Cleveland.

In what turned out to be his final year in the bigs, Morris went 10-6 with a bloated 5.60 ERA. He signed with the Reds in 1995, but chose to retire after not making the club out of Spring Training. (The stint is part of zero-year lore.)

If it weren't for Clevelend, Jack Morris's big league career would be darn near flawless. 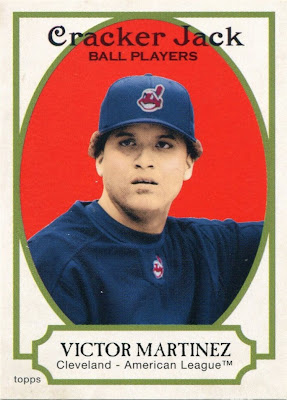 Sorry, but I don't have any good nominees for the catching spot on this roster in my binders.

With the way he's mashing in Detroit, Victor Martinez's tenure in Cleveland might seem like a distant memory to some fans.

But 821 games is nowhere near a short term stop. 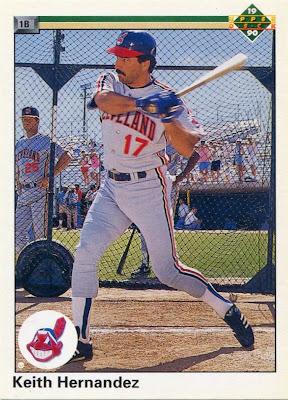 We move from a weak Short Term Stops nominee to one of my personal favorites.

Keith Hernandez had a string of stellar years with the Cardinals and Mets before winding up with the Indians in 1990. In what was a dismal and injury-riddled end to his career, Hernandez hit just .200 with one homer in his 43 games in Cleveland.

I honestly didn't even know he was an Indian until well after I started getting interested in this whole unfamiliar uniform business. It definitely wasn't the most elegant way to go out. 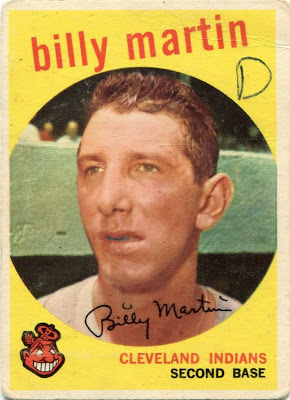 Like so many other big leaguers, Billy Martin played for a lot of different teams during his twilight years.

He suited up for seven squads during his final five seasons. He found himself in an Indians uniform for the 1959 season, hitting .260 in 73 games that year. Topps didn't exactly grant him a stellar card in '59, but it immortalizes his time in Cleveland nonetheless.

I got my copy for a mere 50 cents because someone decided to practice the alphabet on it. 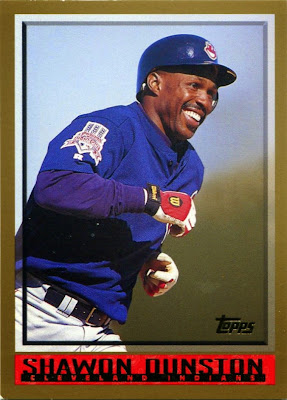 Like fellow one-time Indians Steve Carlton and Billy Martin, Shawon Dunston had trouble sticking with teams in his later years.

He switched clubs nine different times in the final seven seasons of his career, hitting .237 in 62 forgettable games with the '98 Indians before being dealt to the Giants in July of that year.

Seems like the Indians liked to pick up a lot of guys off the scrap heap. 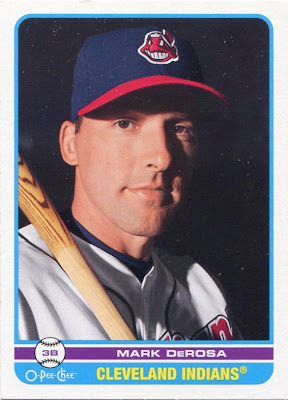 I remember thinking that the Cubs had made a huge mistake when they traded Mark DeRosa to the Indians.

Turns out that the Cubs were right, for once. DeRosa hit .270 in 71 games with the Indians before being dealt to the Cardinals (for future closer Chris Perez) at the 2009 trade deadline. Injuries plagued him throughout the rest of his career and he was mainly a bench player until he retired in 2013.

I'm a little saddened by that, because DeRosa always struck me as one of the truly good guys in the game. 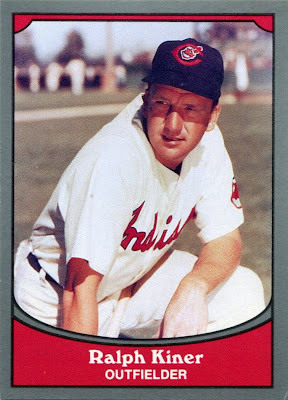 The late Ralph Kiner is the model of efficiency.

Though he only played ten seasons in the majors, Kiner managed to hit 369 career homers. The final eighteen of those came during his lone year with the Indians in 1955, which would turn out to be his last. Kiner retired at 32 due to a nagging back injury.

Imagine what he would've done with another ten years. 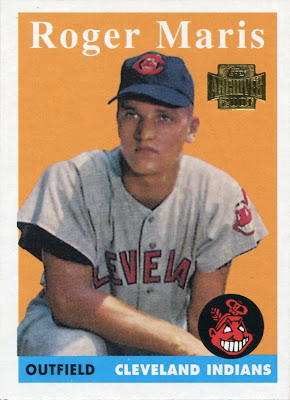 If we're talking sheer unfamiliarity, however, he might be the MVP of the club. Though his stint in Cleveland isn't much remembered these days, Maris actually broke in with the Indians in 1957. He hit his first 23 career homers in Cleveland before being dealt to the A's during the '58 season.

If I were pressed to create a top five "dream cards" list, Maris's '58 Topps rookie would most likely be on it. I've always fantasized about owning a copy, although reality tells me that it's way, way, way, way out of my price range. 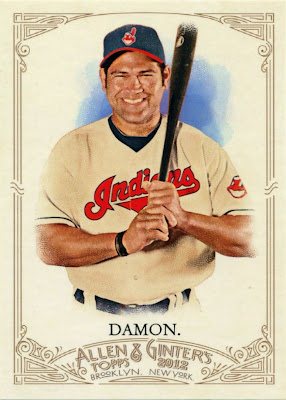 Johnny Damon was on his last legs by the time 2012 came around.

After a slew of solid seasons with the Red Sox and Yankees, he played for four different teams in his final four big league seasons. The last of those came with the Indians in 2012, where he'd hit just .222 with four homers in 64 games.

It's good to see that Damon was still flashing that million-dollar smile on what would be his final baseball cards. 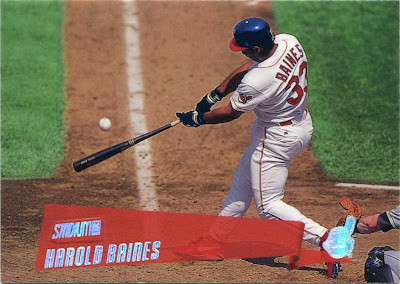 At one point, I didn't think there were any cards of Harold Baines as an Indian.

I stumbled across this one during a random stroll through the Internet one night. I purchased a copy off Sportlots about two seconds later. To date, it's the only documentation I've seen of Baines's tenure in Cleveland. He hit .271 in 28 late-season games with the '99 Indians.

Without this card, I'm not sure anyone would remember that Baines was an Indian.

We'll be taking a look at the Mets roster in the next installment of Short Term Stops.

DeRosa's dad was a trip. He often came to Braves games and announced to everyone nearby in his loud voice "That's my son, Mark. He played quarterback in the Ivy League, you know. He's no dummy!"

Great post. Totally forgot that Carlton, Morris, and Hernandez played in Cleveland. And I never knew Billy was an Indian. Guess my dad was right... we learn something new every day.

It's funny, even though there were a few players that surprised me - there are always "Short-term stops" guys that surprise me - it still seems like there should be more Indians. The Indians just seem like a short-term prone team, I guess.

I like cards like the Johnny Damon cards because I enjoy seeing photoshopped images where I look at it and say "Dude! I can do better than that..."

Jack Morris looks like the manager from Major League in that picture. "Give 'em the heater, Ricky."

Nice job by Bo in providing good suggestions for catcher. Berg and Parrish, each of whom played just 10 games for Cleveland, would be perfect, but I don't think either has a card with the club. But Dempsey played 60 games with the team, and his 1988 Score should be easy to find. Celine started his career with 14 games for Cleveland, and he's got a card in the great 1976 SSPC set. Either would work well.

In that last post, "Celine" was supposed to be "Cerone".