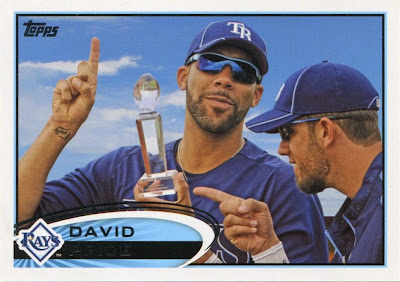 I really don't know what else I can say about oddballs.

Dozens and dozens of posts in this blog's history have been devoted to those lovable oddities. They're awesome. They're spectacular. They're great. The adjectives never end.

That's the main reason why my eyes light up whenever I find a package from Tony of the fantastic blog "Off Hiatus Baseball Cards" in my mailbox. I've taken to calling him The Oddball Machine because of all the quirky items he seems to have lying around.

Even the "mainstream" cards he sends have a little twist to them. This trade started when Tony contacted me about the David Price you see above, asking if I needed it for my awards collection. I did, because it's one of those photo-variation SPs that I never thought I'd track down.

It takes its place as one of the more rare mini-collection hits in my binders. 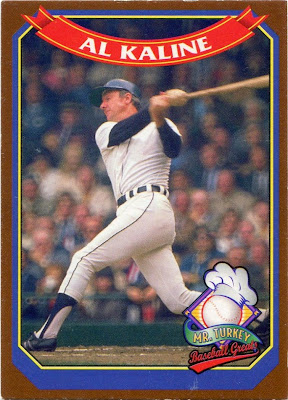 Tony worked his usual magic by throwing in some more, er, conventional oddballs, if such a thing is possible.

Most oddball nuts (including myself) will tell you that food issues are the way to go when it comes to this type of thing.

Mr. Turkey, we salute you. 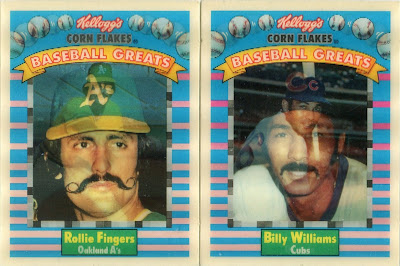 They may not have the mystique and power of the famous 3-D issues from the '70s and '80s, but they're still pretty darn cool and always welcome in this house.

I've never been a big cereal guy, but I'd probably start eating it if boxes came with the possibility of baseball cards. 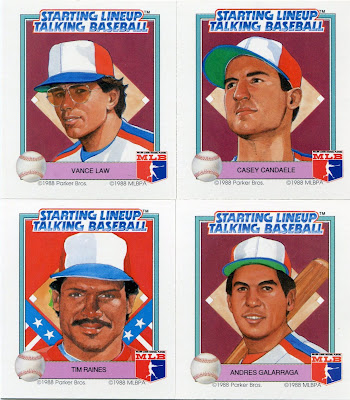 Next up was what I believe is a full Expos team set from the 1988 Starting Lineup checklist.

You're supposed to be able to play some kind of board game with these, but I've never been able to figure it out.

Besides, the cards are cool enough on their own. 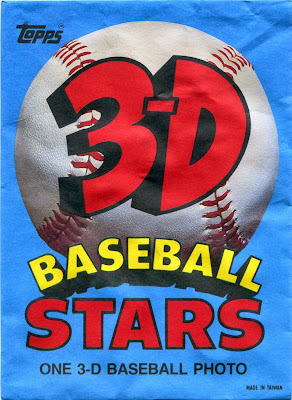 Part of what makes cards from Tony so exciting is the fact that he always manages to include something I've never seen before.

Case in point, these oversized 3-D Topps cards. Completely new to me.

I had no idea Topps ever dabbled in this sort of thing. 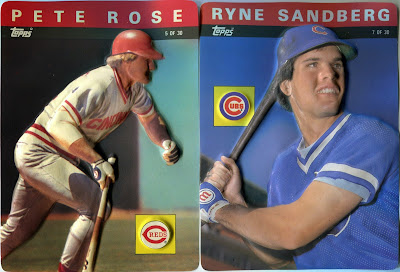 The images literally pop straight out of the cards.

My scanner didn't much agree with them, and they do have a tendency to become a little nightmarish if viewed from the wrong angle.

When looked at at the right angle, however, they're amongst the coolest oddball items in my collection. 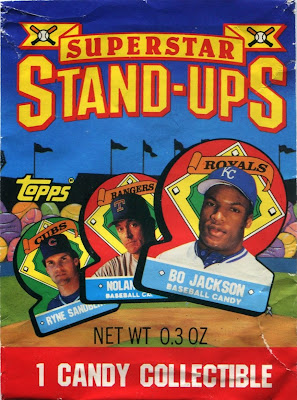 But the oddball madness wasn't quite over just yet.

Tony still had one more surprise in store. Again, it came in the form of an oddball item that I never knew existed in the first place.

Topps also apparently experimented in the sweets department with these 1991 Superstar Stand-Ups. 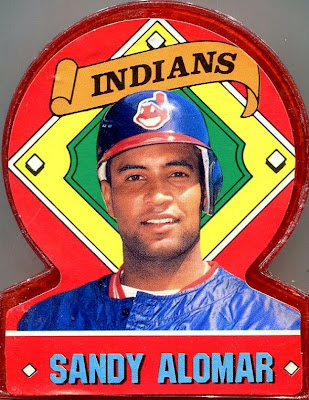 Tony decided to send none other than Sandy Alomar himself my way.

It's tough to tell from the scan, but there are indeed little pieces of Smarties-like candy inside this magnificent piece of oddball memorabilia.

Just don't expect me to eat any of it. Let's face facts. The candy is a year older than I am.

My dentist would not approve.

It's no secret that oddballs are definitely approved around here, which is why trading with Tony is always such a fun experience.

Exploring the lesser-known chapters of our hobby never gets old.
Posted by Nick at 6:26 PM

Glad you enjoyed the package, Nick. For whatever reason, I'm perpetually drawn to those items that are not the usual base set cards. When I find things that strike my fancy, I buy them. And, the result ends up with 23-year-old candy in a Sandy Alomar plastic container.

Tony is the man! Those oddballs are awesome. I'm just hoping he survives his battle with JBF ;)

It's funny, it seems like every time I see one of those Stand-Ups, it's Sandy Alomar.