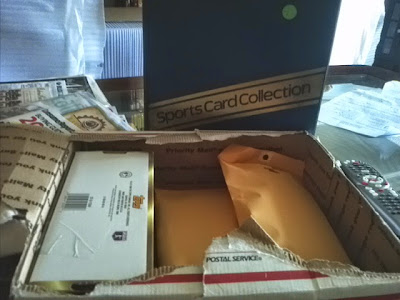 Remember when I was listing out all the reasons that readers rule?

Well, you can add another bullet to that list.

Over the past year or so, a reader named Wes W. has been dropping mammoth boxes onto my doorstep. Keep in mind that this is not the Wes of JBF fame, but actually a different Wes whose card generosity seems to know no bounds. An odd coincidence, I know.

His latest box (and quite possibly his largest yet) arrived right when my end-of-semester craziness was starting to approach at school. These cards were a much needed distraction at the time, and, let me tell you, it certainly made for a few fun days of sorting and organizing.

The words I uttered to myself when I first ripped this box open cannot be repeated here. 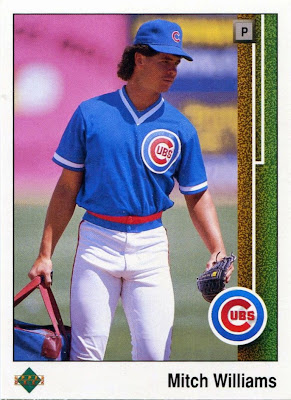 The sheer volume of material here caught me way off-guard.

But don't let that fool you. This wasn't a quantity-over-quality type of deal. Everything Wes sent was hand-picked and catered towards my collection in one way or another, which is unbelievable considering how much cardboard was in that box.

Like Wes's past mailings, he neatly organized all the cards into a number of distinct categories. There's been a special "Wild Thing" section in the last few boxes he's sent, and this one continued the trend.

Because we all use some Wild Thing in our lives. 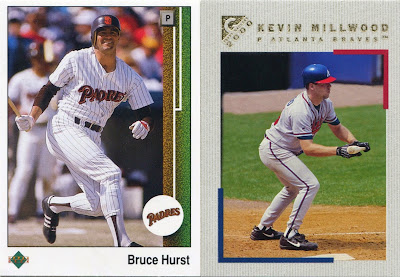 When it comes to hitting my mini-collections, Wes might well be the king of them all.

These two "pitchers at the plate" started the madness. 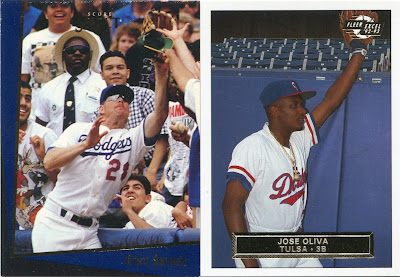 Here are a couple of the more interesting "at the wall" cards I've come across.

The Snyder grabbed my attention not so much because of the ex-Dodger himself, but because of the white-shirted fan on the right-hand portion of this shot. I'm almost positive that what we're seeing there is a Ramones t-shirt, which is special to me since they're my favorite band. (My dad tells me that the fellow on the left is sporting an R.E.M. shirt, another of my favorite bands.)

Although a shot like that doesn't make a whole lot of sense for a third baseman. Wes notched some new "multiple-exposure" and "bat barrel" cards with this pair.

Although I'm much more infatuated with the desert-esque backdrop on that Durham. 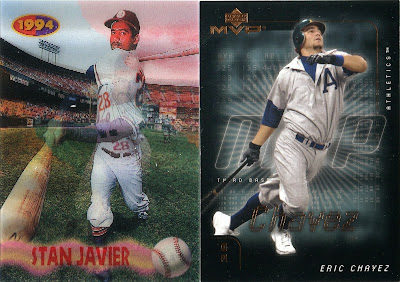 This box added bunch of throwbacks to my collection, but my two favorites were of the Oakland variety.

The Javier (whose other 3-D frame doubles as a "bat barrel" shot) flashes back to the days of the PCL's Oakland Oaks, while the Chavez travels back to the 1901 Philadelphia A's. 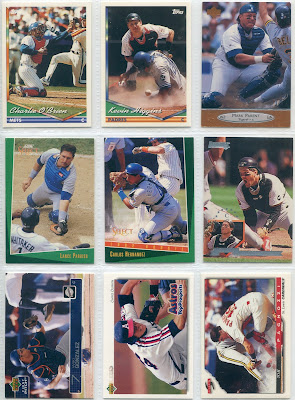 Here's where Wes really started to crank up the insanity meter.

The amount of cards he added to my remaining themes were enough to fill up a nine-pocket page. And, in some cases, much, much more.

As you might guess with this action-packed page, plays at the plate were in full force. Wes went out of his way to beef up my "autograph" mini-collection. 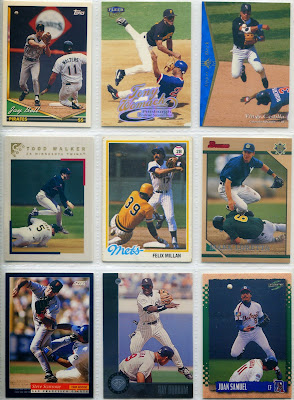 In the end, my "double dips" mini-collection received the brunt of Wes's attack.

Whether of the vertical... 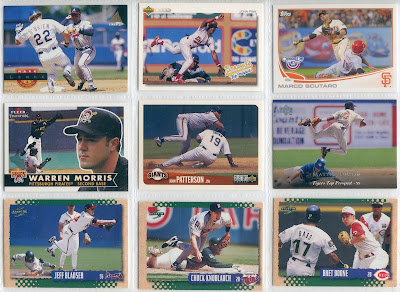 ...or horizontal variety, the double plays seemed to be never-ending.

I scored a grand total of 80 new "double dips" after all was said and done. That's definitely a record for a single trade package. By far.

They say that records were meant to be broken, but I don't know if anyone will ever be able to top that mark. 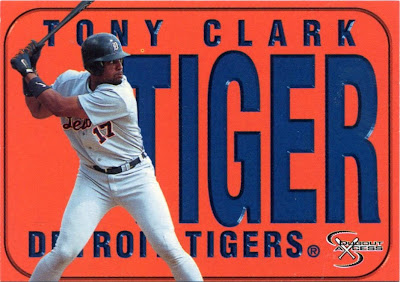 Perhaps even more amazing is the fact that Wes wasn't quite done yet.

Wes has added little sections entitled "Everything Else" in nearly all the boxes I've received from him over the past year. These are especially exciting to dig through because I'm never quite sure what kind of randomness I'll find inside.

Most of the remaining cards you'll see in this post were classified under the "Everything Else" file, including this in-your-face Tony Clark insert. 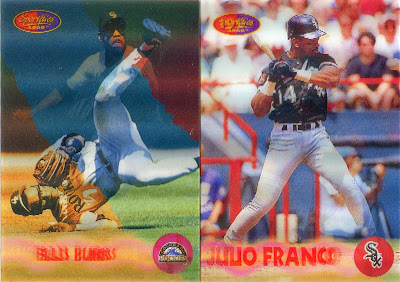 I think I speak for most collectors by saying that 3-D cards are almost always a hoot.

They don't scan very well (scanning them sideways is the only way to get a halfway decent result), but they're great for in-person viewing.

Oohs and aahs usually ensue whenever a few fall into my hands. 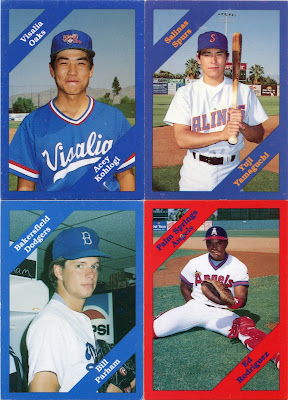 I've said this more times than I can count, but minor league sets are a goldmine for hidden gems.

This scan alone features a translator (Kohlogi), an early Japanese import, a Pepsi machine, and a funny facial expression.

Maybe minor leaguers really do have the most fun. 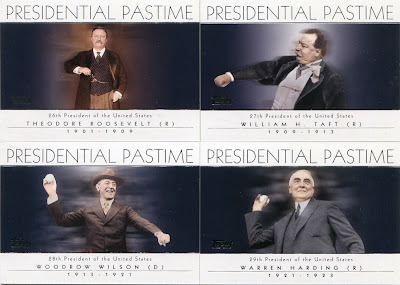 Wes satisfied the historian in me with this quartet of presidents.

I don't know whether it was sheer coincidence or not, but these four Commanders in Chief served one after the other from 1901 to 1923.

Although Harding was probably the worst president this country has ever seen. 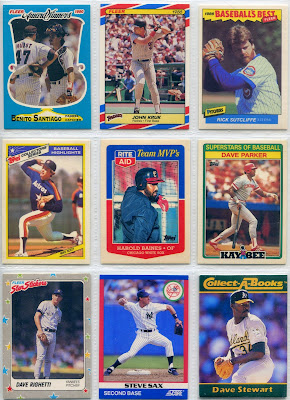 One of the sections in this box was entirely reserved for oddballs.

I probably don't have to tell you how much of a thrill that was. Also among the assembly line of goodies were a stack of uncut panels from the 1983 Fleer Stickers series.

I ended up tearing the majority of them apart because I just couldn't help myself. I think they look much better this way.

Besides, they deserve to live a life of their own after having to share the spotlight with someone else for the last thirty-two years. 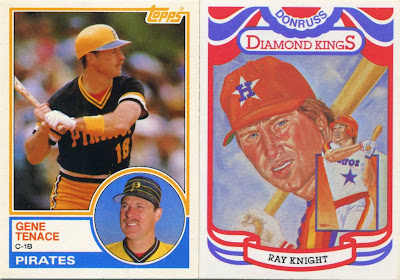 We return to the full-sized greats with these two.

The '83 Topps Traded issue on the left is one of the few cards you'll find of Gene Tenace's one-year stint with the Pirates. And, although I've never been a huge Diamond King fan, I'm happy to have that Ray Knight. 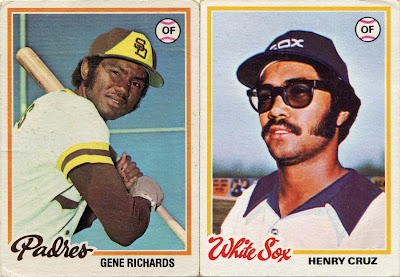 Wes told me that the binder he included in this gargantuan mailer originally held a bunch of '78 Topps singles.

He picked out a few he needed and sent me the rest. In terms of my player collections, I have most of the cards I need from '78 Topps at this point. But, as I've learned over the years, player collections are really only the tip of the iceberg.

I may not collect guys like Gene Richards and Henry Cruz, but I can't ignore exaggerated choke-ups and sweet shades like those. 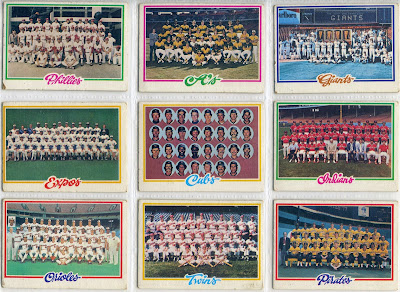 I ignored team cards for a long time.

Only recently have they entered my collecting radar, and I've slowly tried to make up for lost time in recent months. I needed the majority of the '78 Topps team cards that Wes included, including the iconoclast Cubs and their floating heads.

After looking at this page, I think it's safe to say that the '70s were the best time for uniforms. That was most definitely a marathon of cardboard. I'm a bit winded after just writing that post, which speaks to the staggering amount of sensory overload that Wes put together for me.

You know, I didn't think it was humanly possible to hit on every single thing I collect, but Wes may have done just that. It goes to show how great the readers of our little community can be.

People like Wes are more than deserving of a big high-five.
Posted by Nick at 6:52 PM

Aside from the Ramones shirt...the guy top left,behind the well-dressed dude?....HE'S got an R.E.M. shirt on....another of your fave bands!!

What an awesome bunch of cards!

So, you like R.E.M. a lot too? Having gone to law school in Athens, Georgia, I have a few R.E.M. stories...I've met Michael Stipe a couple of times, for instance....

Cool pickups. Nice Team cards. Wish Topps would go back to the team picture for team cards not these action shots of one or two of the stars which can be done on their individual cards or team leaders cards.

For my blog I need to be more consistent and prolific for my 3 or 4 regular readers to start sending me stuff, and for the others to start reading it regularly. OH well out of sight out of mind.

I also need to get into sending random PWEs that could help somethings.

Love the '78 team cards... almost as much as reading about all the JBF packages floating around our blogosphere.

"Maybe minor leaguers really do have the most fun."

The 12-hour bus rides aside, they do. Major league baseball isn't as fun anymore for all involved.