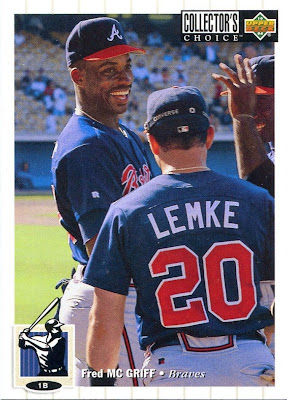 More than perhaps any other brand, Collector's Choice embodied the idea that this hobby is supposed to be fun.

I can remember owning cards from Collector's Choice at a very young age. I fell in love with them then, and the romance hasn't really died down since. It may not have garnered the notoriety or lifespan of a lot of other brands, but, if you ask me, Collector's Choice is one of those select sets that has stood the test of time.

Things didn't seem very fun in the aftermath of the 1994 player's strike. Both baseball and the hobby we all love were in dire straits. Somebody had to provide a shot in the arm.

It seems like that was Upper Deck's goal when they launched the Collector's Choice brand in '94. In an increasingly money-crazed hobby, the packs were an affordable 99 cents a pop. And, although crazy designs were soon to become the norm, 1994 Collector's Choice adopted a more minimalist, low-key approach.

Although I'm not sure how many collectors knew it at the time, it was the start of something special. 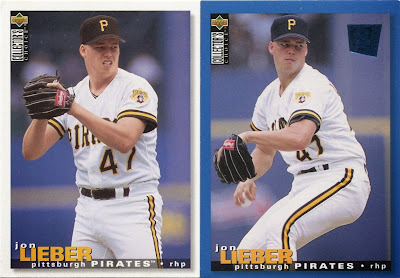 All things considered, I think 1995 is my favorite year of Collector's Choice.

These specifically were some of the first cards I ever saw as a young lad, and the design is permanently etched into my memory.

I'm still not sure why, but Upper Deck released a blue-bordered Special Edition Collector's Choice set to supplement their base issue in '95. The two sets feature a lot of the same players (with similar photos) and don't really carry any distinctive qualities apart from the blue borders.

Then again, the mid '90s were a time of indulgence, so I can give Upper Deck a pass here. 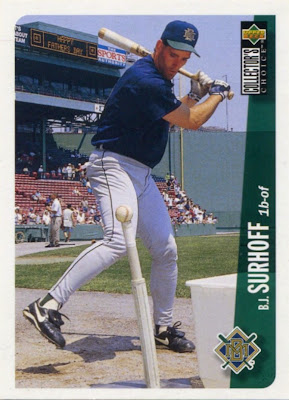 Thankfully, they dropped the Special Edition schtick the following year.

We were back to good old Collector's Choice, and the brand was looking as fine as ever. As the 1996 layout confirms, design was never a huge element with this brand. Collector's Choice took a page from the likes of Stadium Club by putting the emphasis on the photography.

Plus, in an era where more and more high-end sets were starting to hit the shelves, the brand stayed true to their fans by sticking with their 99-cent price tag. And, although Collector's Choice was famous for its large checklists, their 790-card offering in '96 was easily the largest in its history.

I don't know how many kids were left in the hobby by the mid '90s, but I'm sure a lot of them bought Collector's Choice. 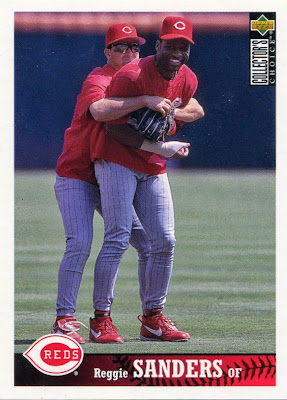 For a long time, I didn't notice just how diverse Collector's Choice was.

You got a little of everything inside one of those 99-cent packs. Collector's Choice is packed with standard action shots and very vintage Topps-esque poses, a pleasing mix which was fairly rare for the mid-to-late '90s.

But the candid shots are where the brand really hit its stride. You can see it on the McGriff, Surhoff, and this terrific Reggie Sanders. Collector's Choice put a lot of what happens outside of the three-hour ballgames onto their cardboard.

To me, that's what the brand did better than any other. I can get the standard pitching shots anywhere. I want to see the moments they don't show on TV.

These candids gave Collector's Choice an identity that no other set could claim. 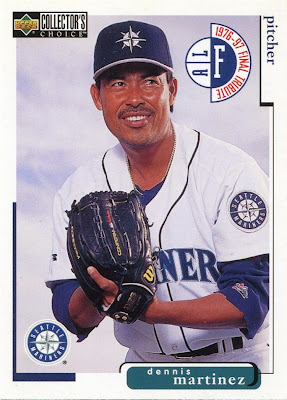 In what is still one of the biggest tragedies in the history of baseball cards, Collector's Choice would release its last set in 1998.

Upper Deck had to raise pack prices to a whopping $1.29, but the muted glamour of the brand's early days was still there.

I was breaking into the hobby right around '98, but I don't really remember hearing any rumblings about Collector's Choice at the time. I guess the brand's demise was just another casualty of what was becoming an increasingly higher-end hobby.

Upper Deck attached one of their awesome Final Tribute stamps to Dennis Martinez's 1998 Collector's Choice card, but the longtime hurler decided to let Father Time wait and went on to pitch one last season with the Braves that year.

It's a shame that Collector's Choice couldn't have done the same. Even today, I wish that it could've lasted for just one more year. Because, in the end, Collector's Choice was one of the few brands that actually lived up to its name.

I really remember getting you tons of those as a card newbie!....good times!!

Silver signatures were really fun to collect, too !

Contrary to popular belief, there was actually one more Collector's Choice set released in the 1990's. 1999 UD put out a more truncated product, UD Choice, which had a lot of the same type of inserts and the same emphasis on fun rather than design. However, I ripped a box of it this year, and the collation was terrible, partially due to a much smaller base set. UD tried to make a ninety-nine cent product into a more mature, more futuristic set, and it failed miserably.
I classify 1999 UD Choice as a member of the Collector's Choice lexicon, but not everybody does. You can do what you wish with it.

loved collector's choice as a kid, someo of my favorite cards as well.

I kinda missed out on CC during the 90's, because it was a little too low end for me. I was going in and out of the hobby... and when I did collect, I focused on products like EX-L, Finest, Bowman's Best, Flair, Emotion, and Chrome.

But these days I enjoy going back and filling up the gaps with dime box purchases. CC had some amazing insert sets: Stick'ums, Crash the Game, and those bobble head things.

You could say I was a kid in 1995... a 30-year-old kid. For most of its run, Collector's Choice was the set I enjoyed the most each year. Every other set was getting more and more outlandish and foily and gaudy, while CC was keeping it basic and attractive. I was very disappointed when it went away.