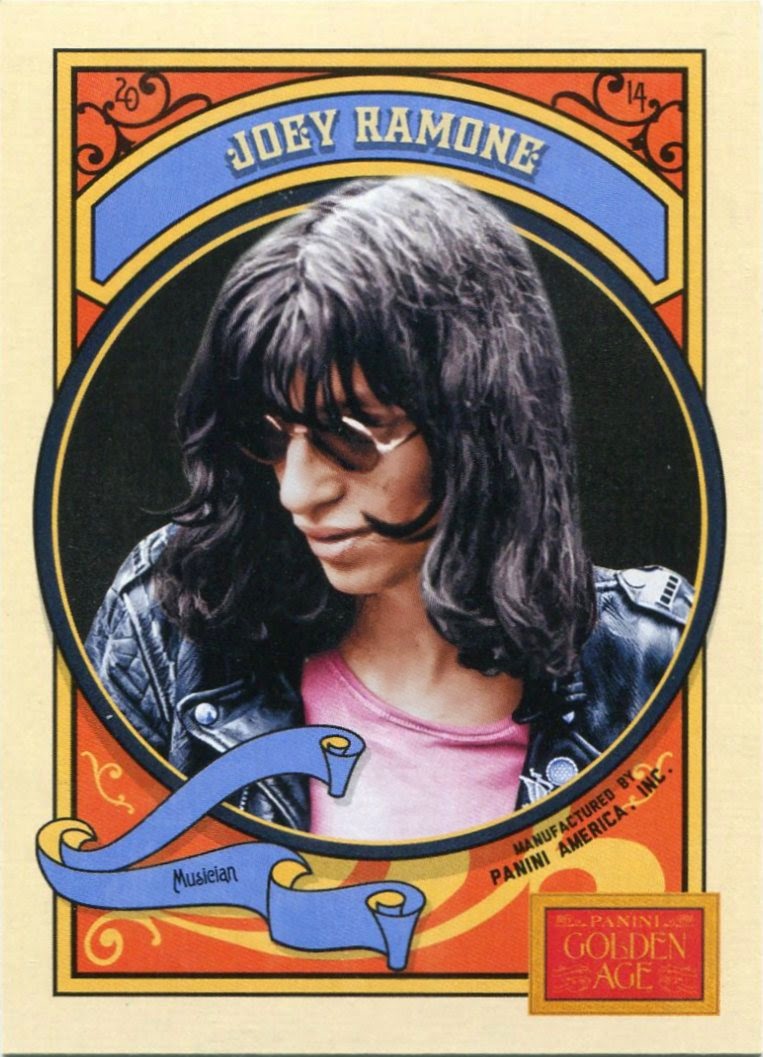 I am here to report that we'll be taking a brief hiatus from my Topps countdown posts this week.

To make room for other countdowns, of course. As a blogger, it's pretty much my civic duty to compile some kind of end-of-year list. I'll be throwing a few different countdowns at you over the next few days here on Dime Boxes, in fact.

We'll begin the week of lists with my personal ranking of the Top Ten Cards of 2014. I've done one of these posts to cap off each of my first two full blogging years.

As per the rules of my past lists, non-baseball cards are not eligible for this countdown. I can't possibly be expected to rank a card of a personal hero like Joey Ramone next to someone like Derek Jeter, can I? Joey deserves a whole separate honor.

Aside from that, any baseball card I obtained during the course of 2014 is fair game for this list. Lots of great ones were considered, but only ten made the final cut. (Well, kind of. You'll see.) 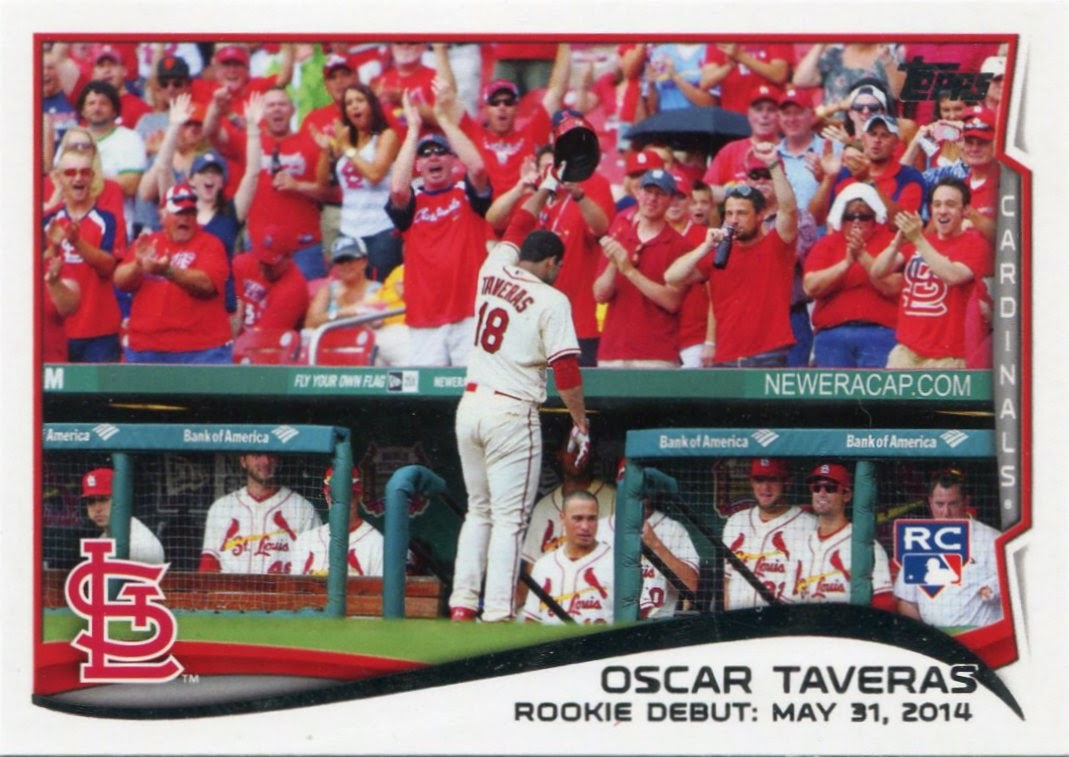 It still bums me out to talk about it, but we begin with perhaps baseball's worst tragedy of 2014.

As you probably already know by now, up-and-coming Cardinals outfielder Oscar Taveras passed away in a car accident in October. He was only 22 years old.

It is indeed awful for any life to be taken at such a young age, but there's something about losing a figure from the game I love so much that makes it hit home a little more.

While they didn't know it at the time, Topps produced what would become an emotional shot of Taveras tipping his cap to the St. Louis crowd as part of their Rookie Debut subset in Update.

Part of me wants Topps to print an In Memoriam issue of the late outfielder in their 2015 checklist (much like they did with Ken Hubbs and Cory Lidle), but, as sad as it might be, the other part of me wants this to be Oscar Taveres's final ride into the sunset.

It was definitely the most emotional card of 2014. 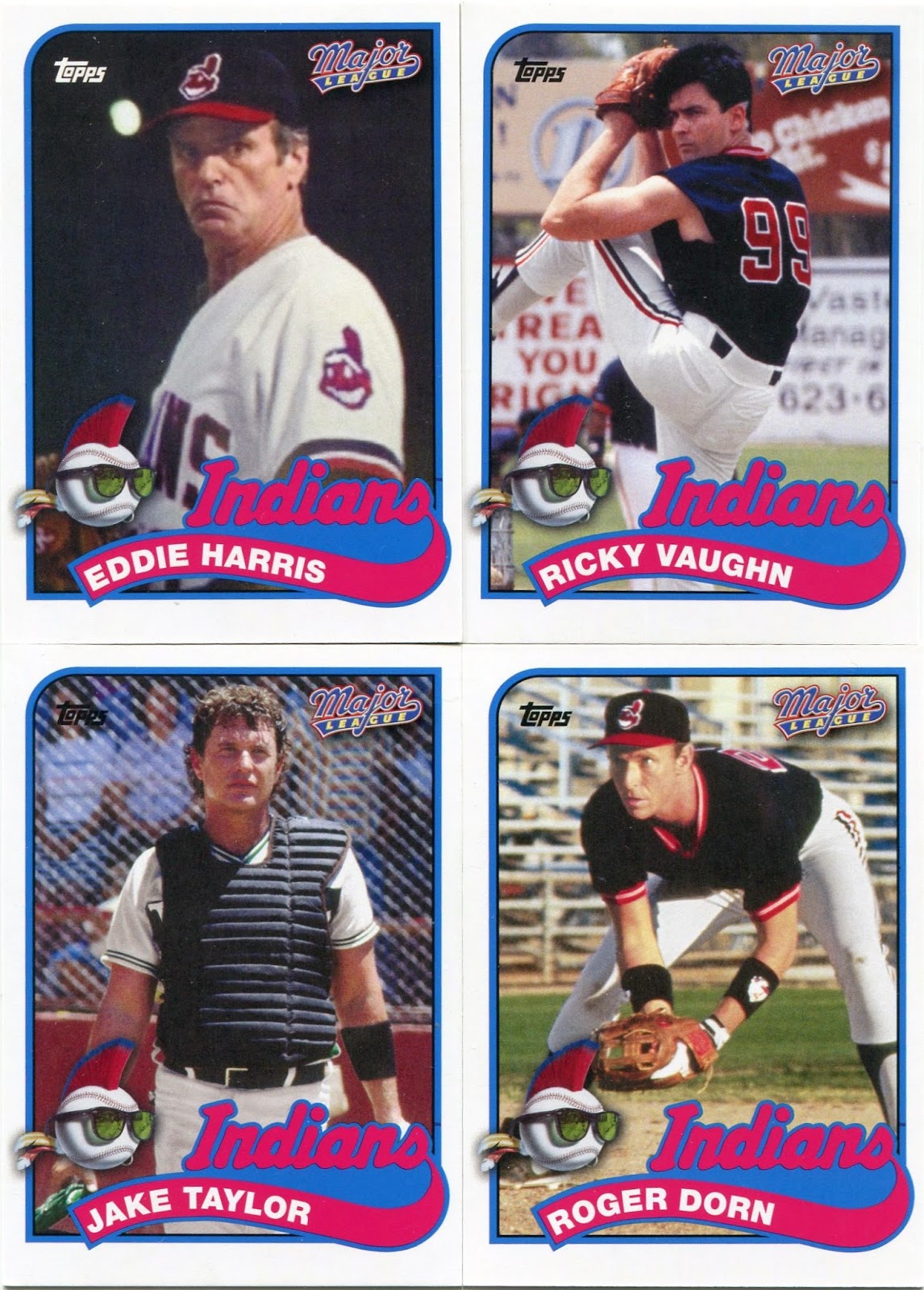 Let's get happy again with a rollicking good comedy like Major League.

Topps had an idea for the ages by immortalizing one of the best sports movies ever made in this year's Archives checklist. I'm a big fan of Major League and get a huge kick out of finally being able to own a card of someone like Jake Taylor.

If there's one thing that prevented the set from being higher on this list, it's the fact that it just wasn't big enough. Four cards seemed underwhelming, especially with the memorable cast of characters in Major League.

Where's Cerrano? Or Harry Doyle? Or Lou Brown? Or Willie Mays Hayes? Topps could've easily beefed this set up to at least ten cards without missing a beat.

Nevertheless, I applaud the idea, even if it turned out to be juuuuuuuust a bit outside of the mark. 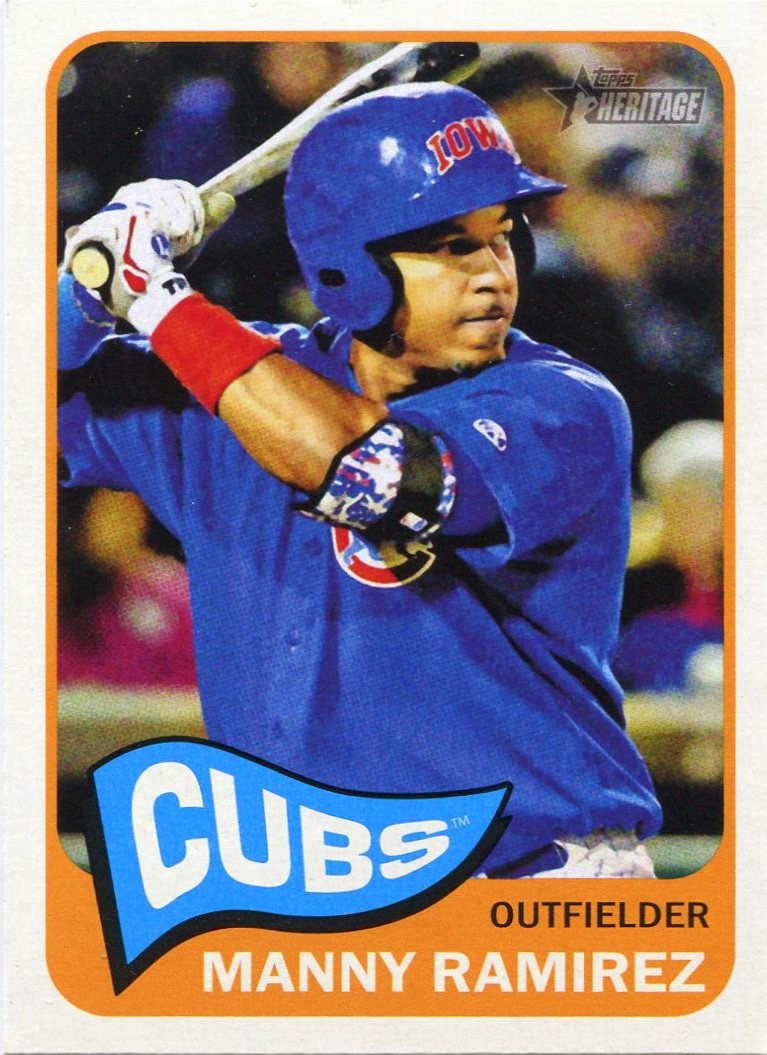 If nothing else, this card showed me that Topps does still have a sense of humor.

There was no real reason to put Manny Ramirez in this year's Heritage Minors checklist. The Cubs came out and said outright that Ramirez wouldn't be called up to the majors in 2014. The days of Manny being a prospect are long gone.

I just found it hilarious that a 42-year-old made it into a set that revolves around minor leaguers, many of whom are probably less than half Manny's age.

This is, as of this writing, the only card I own from this year's Heritage Minors checklist. I don't care if one of the 20-year-old prospects in the set ends up becoming the next Walter Johnson. 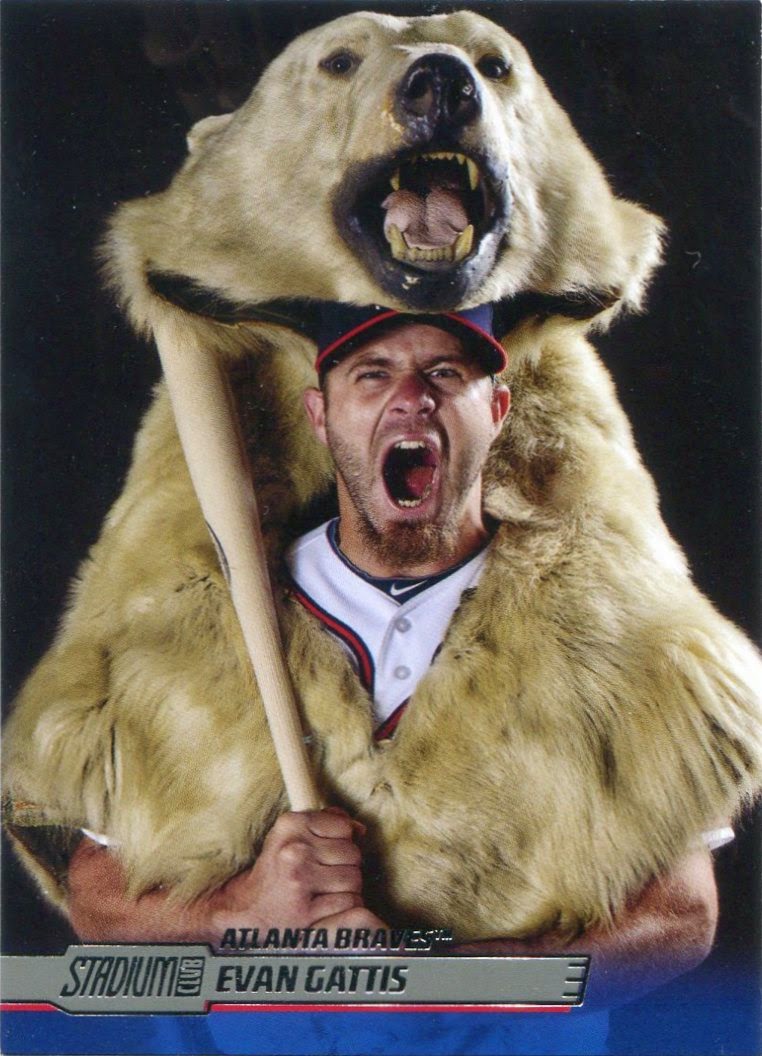 You probably know how awesome 2014 Stadium Club is by now.

I devoted a whole chunk of card show real estate to expressing my love for the revived brand.

A set for the ages is bound to produce quite a few cards for the ages, and that's exactly what we have here with Evan Gattis. This hilariously scary shot is obviously a play on the catcher's nickname, "El Oso Blanco." (Or "The White Bear.")

I can't think of another baseball card that features a real, actual animal hide.

Could you imagine seeing something like this in Gypsy Queen or Archives? Me neither. 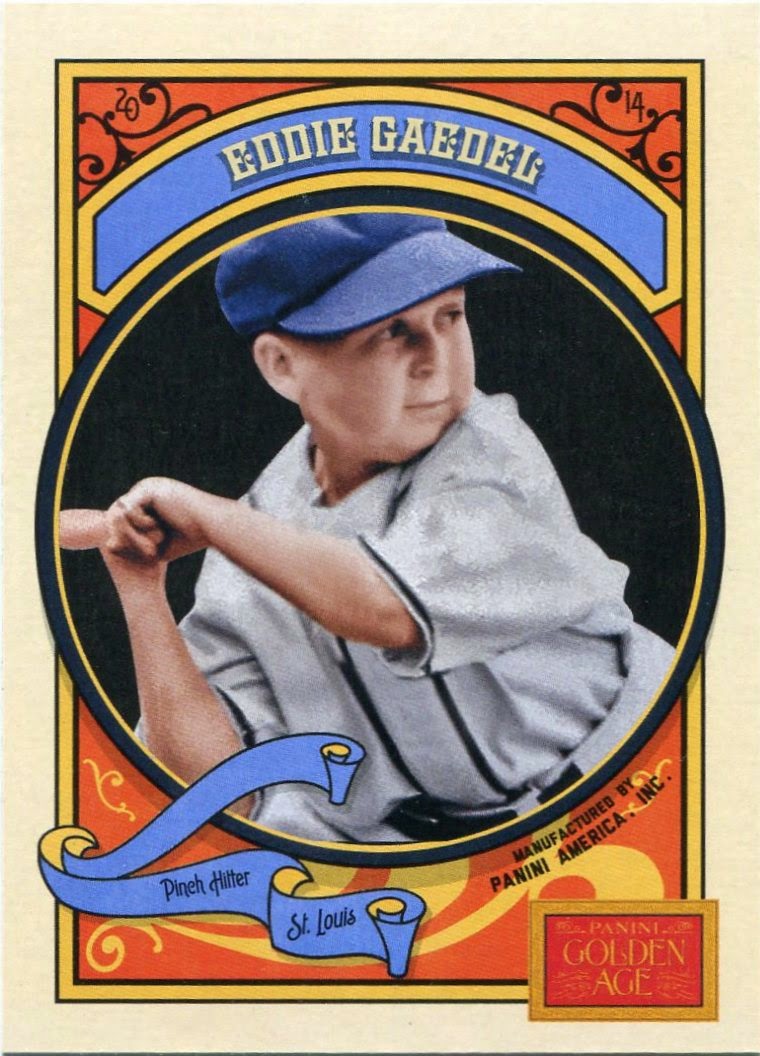 Before 2014, I owned exactly one card of Eddie Gaedel.

It's still one of the greatest ever printed, in my opinion.

This year's Golden Age checklist finally allowed me to add a second card to the collection. The diminutive 3'7" superstar took a single at-bat with the St. Louis Browns back in 1951 before his contract was voided by MLB. (Not surprisingly, Gaedel walked on four pitches and was lifted for a pinch-runner.)

To me, Eddie Gaedel has always represented one of those oddly iconic moments that only baseball could create. There really isn't anything like him in the annals of football or basketball history. Eddie Gaedel is baseball.

It's good to finally see him getting a little more cardboard pub. 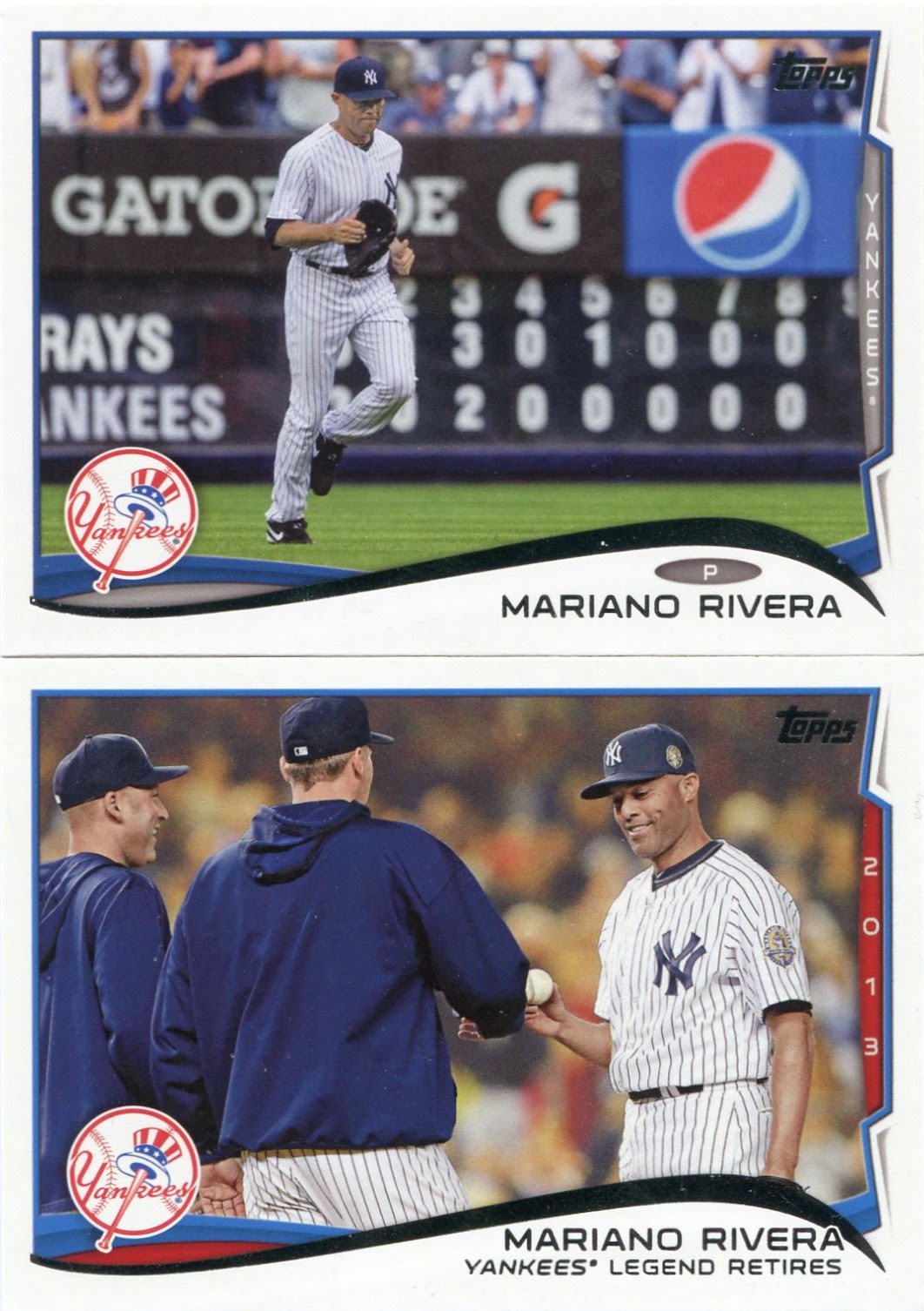 Okay, so I cheated.

Mariano Rivera received two outstanding cards in this year's Flagship checklist, and I'll be darned if I was able to choose between them.

So, due to my own inability to pick one over the other, they both made the list. Together.

The standard base card on top will go down as Mo's true sunset issue. It captures Rivera doing what he did so many times during his long and hallowed career, calmly saving yet another win for the Yankees. You could look at that shot alone and know that the Rays had no chance that afternoon.

The shot Topps used for Rivera's Highlights subset is just as powerful, presenting the exact moment he called it quits. Longtime Yankee teammates Derek Jeter and Andy Pettitte were brought out from the dugout to take the ball from Mo one last time, leading to a highly emotional scene at Yankee Stadium.

All I can say is, well, thank you, Topps.

You gave Mariano Rivera the goodbye he deserved. 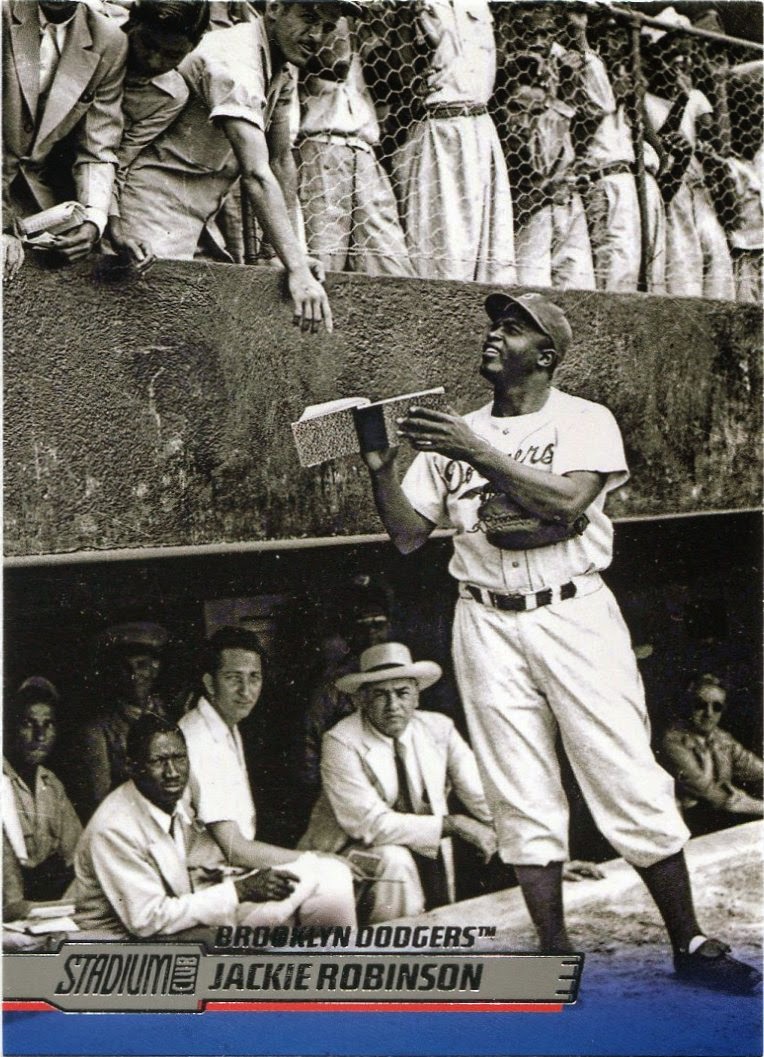 Jackie Robinson is undoubtedly one of the most influential figures in baseball history, but you'd never know it from his baseball cards.

Most of what Topps has released of Robinson in recent years has been a gluttony of uninspired and often recycled photos. I own north of 100 cards of Jackie going in to 2014, but not many of them stood out in any way.

That is, until Stadium Club came around.

Yes, this exceptional "autograph" shot does seem a lot better due to the boring issues Robinson received in the past. Even ignoring all that, though, this is still one fantastic baseball card. I can honestly say that I have never seen this photo of Jackie before. It captures the man at the top of his game and popularity.

It became my new favorite Jackie Robinson card after about two seconds. 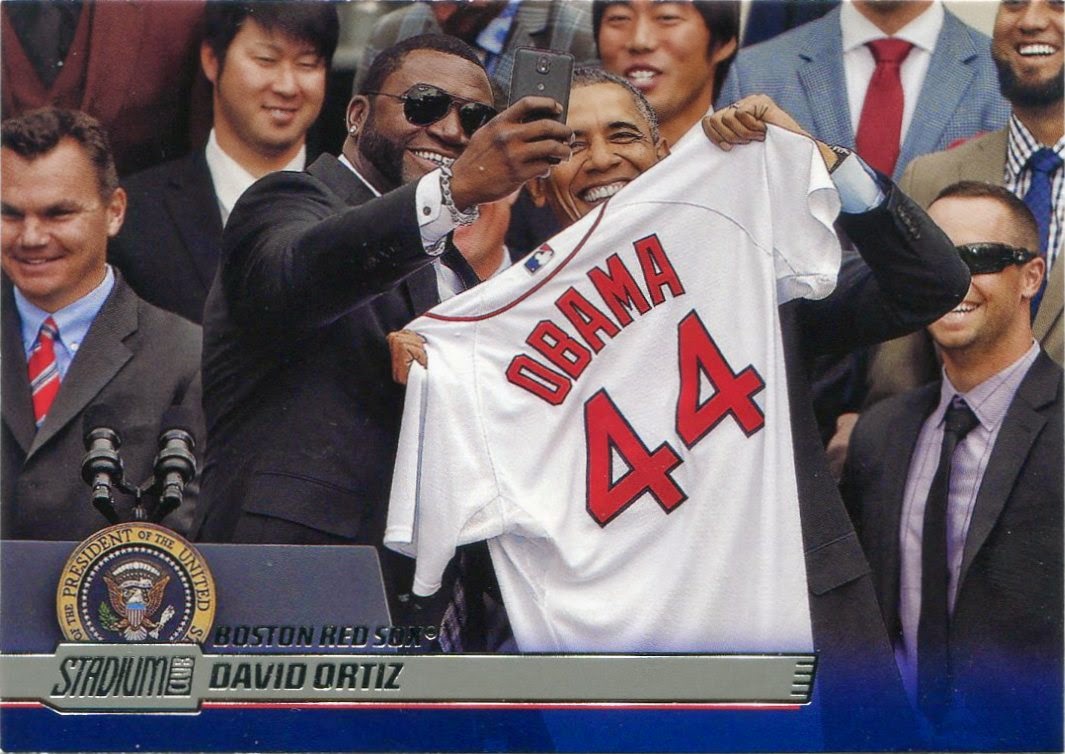 Jackie Robinson and David Ortiz might as well be 3a and 3b on this list. It was almost impossible to choose between them.

In the end, something about Ortiz convinced me to give him the nod. I'm not exactly sure what. Maybe it's because this shot so perfectly conveys the larger-than-life personality that the Red Sox slugger has become so famous for over his career.

I mean, even the president had to take second billing on a Big Papi selfie.

That can't be very common. 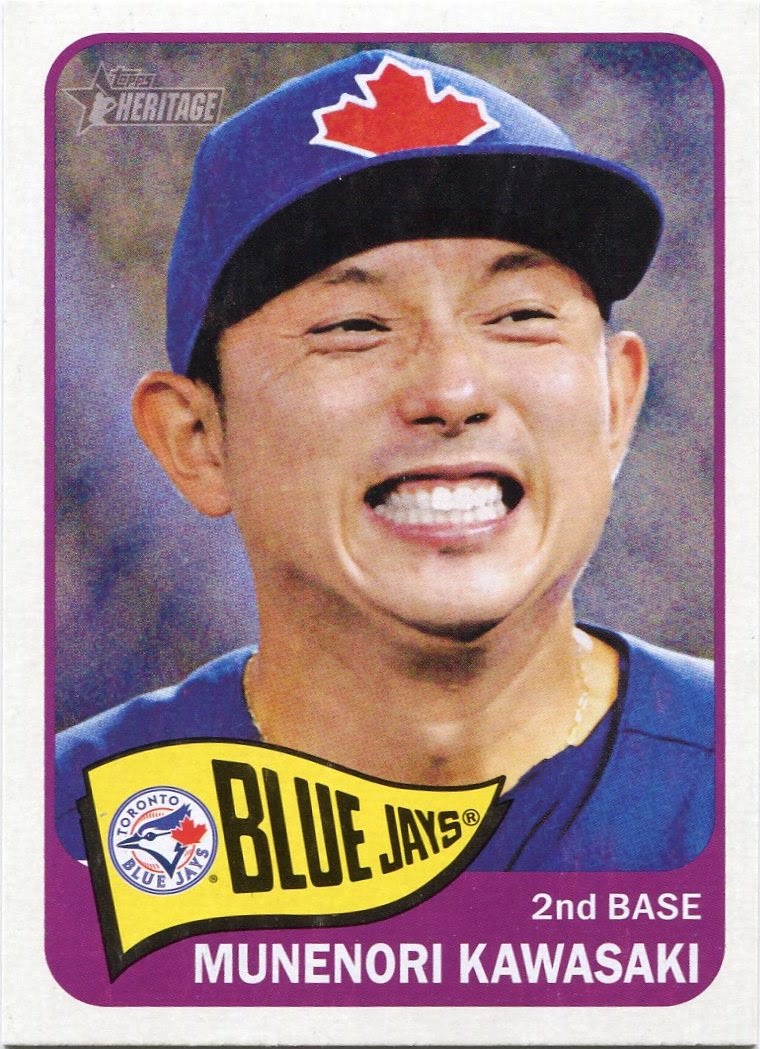 Going into 2014, there were no licensed baseball cards of Munenori Kawasaki.

I found it funny that even though Topps continued to produce cards of third-tier rookies and other no-namers, they wouldn't give Kawasaki the time of day. I was beginning to think we'd never see a card of him.

Then Heritage came around. And all my anger instantly washed away. This goofy photo tells you everything you need to know about Munenori Kawasaki in one, single frame.

Listen, you know me. You know I like action shots, strange poses, and generally quirky cards. But, when done right, there's something beautiful about a candid portrait, something that isn't really possible with an action shot.

Topps has gotten away from that line of thinking in recent years. That's something that Heritage should accomplish. And, at least in this instance, Topps was successful. Oh, were they successful.

That, my friends, is all I can ever ask out of a baseball card. 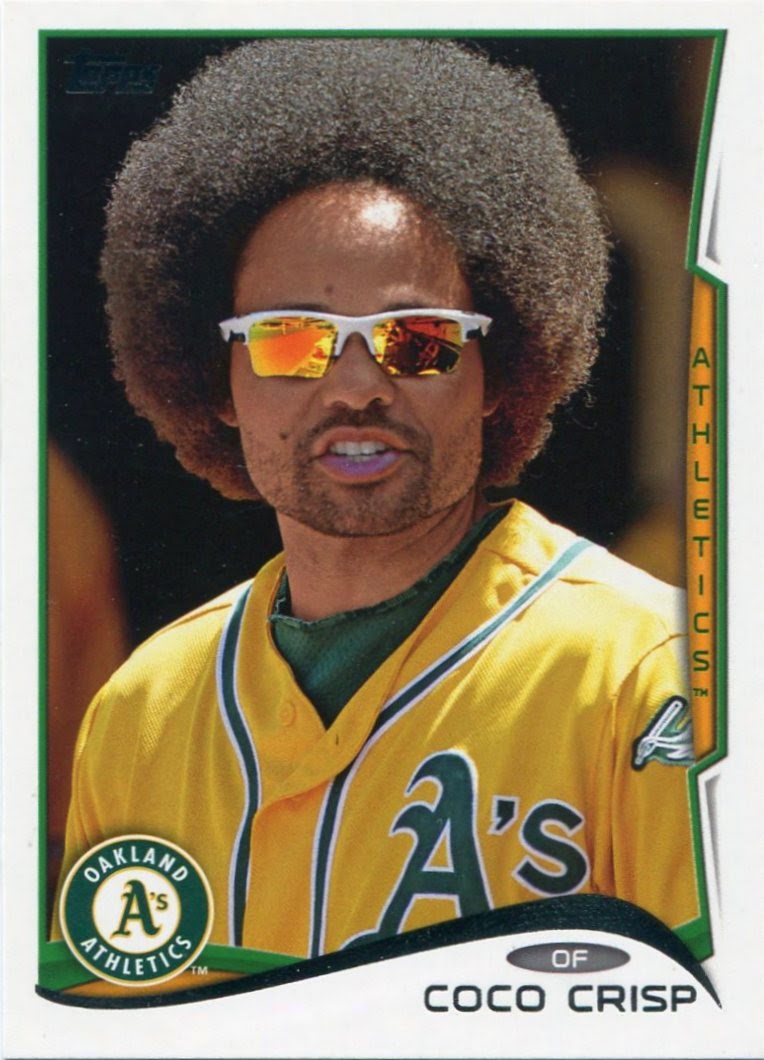 Others tried, but no one could top Coco and his massive 'fro in 2014.

More than perhaps any cards I've seen in recent memory, this spectacular piece of cardboard is a throwback to the '70s, a time I never got to live through in the first place.

Coco and his 'fro present a serious challenge to the 'fros of past greats such as Oscar Gamble, Jose Cardenal, and Bake McBride. I didn't think that was even remotely possible here in an era full of faux-hawks and bushy beards.

I've praised this as the Card of the Year since Flagship hit the shelves back in January.

I knew it'd be number one since day one.

I had a way tougher time crafting this list than I did either of the past two years.

Looking back, 2014 certainly had its share of memorable moments.
Posted by Nick at 6:37 PM

All good choices -- definitely! The Crisp on the Red Foil is outstanding.

Great post Nick. Enjoyed the countdown and don't disagree with any of your selections.

Great list! I love the energy Kawasaki brings to the stadium. You can't look at that awesome Heritage card without smiling. And that Gaedel card is sweet. Look forward to reading your other countdown lists.

Hard to argue against the Coco. It stood out from everything else this year.

Great list and entertaining writeup, Nick.
I really loved the Ramones and Rolling Stones get cards this past year.
That Manny card is ridiculous - in a Manny bein' Manny kind of way.