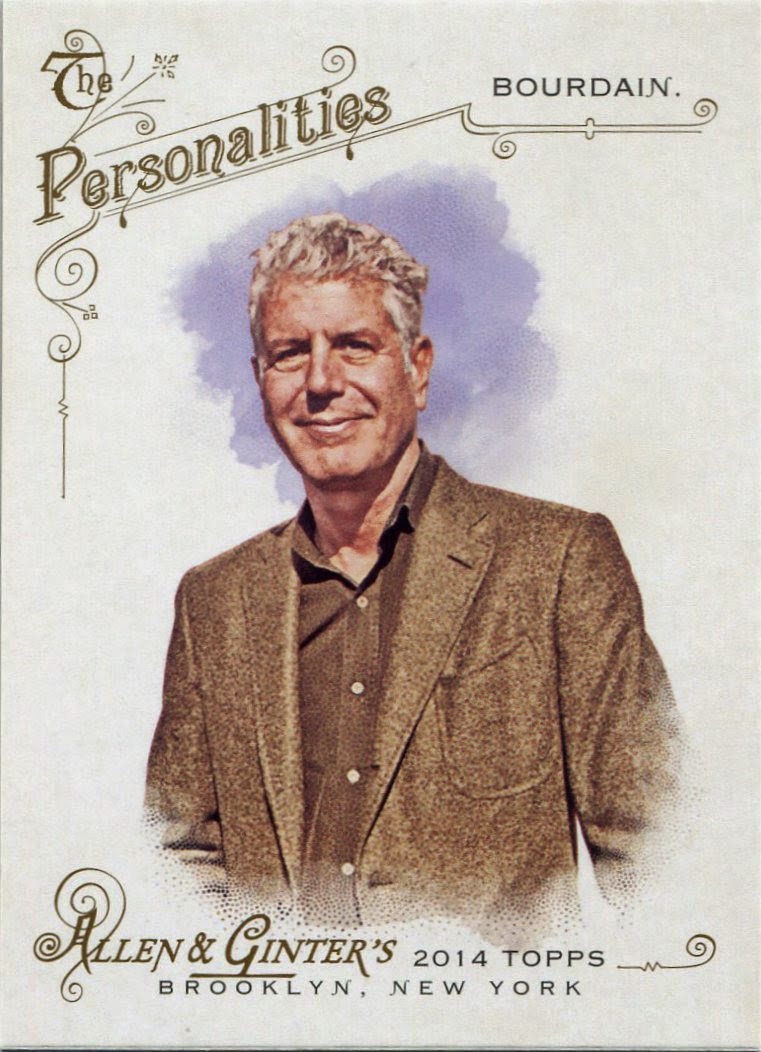 It's been a hectic couple of weeks around here.

The flurry of final homework, final papers, and final exams I've been brushing up on lately has left virtually no time for anything else. I'm not complaining, as this is basically what I signed up for as an English major, but it's still been taxing on my brain.

School comes first a hundred times out of a hundred, but I always get a little uneasy whenever I break my usual semi-regular blogging routine. The one post I have published this week (my final card show recap) was written at three o'clock in the morning. I feel like I'm neglecting the blog.

And that's not even mentioning the round of trade packages I've received these last couple weeks. I, sadly, haven't had much time to return fire on any of those, something for which I do apologize. I'll be getting some cards together for all the great people who have recently sent me awesome packages in the coming weeks.

One person who did receive cards from me before this whole finals extravaganza was Jeff of the spectacular blog "2x3 Heroes." It was the least I could do considering the amount of damage he did to my 2014 needs.

The Anthony Bourdain you see above might be the first card I've ever specifically put on my want list with my mom in mind. I'm not much of a foodie (I'll just have the Big Mac, thank you very much), but my mom is a big Bourdain fan.

This one went into her blossoming card collection. 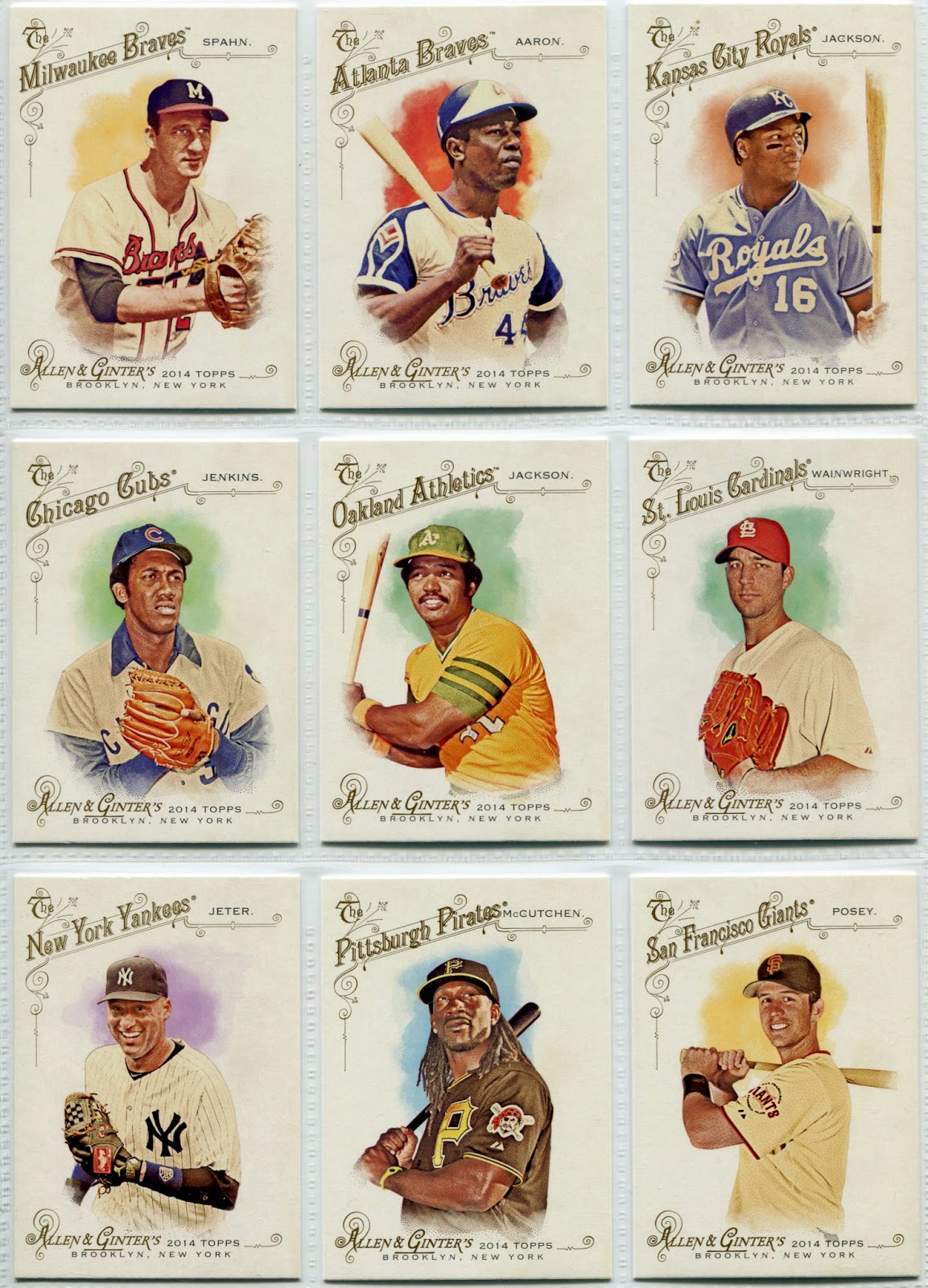 The rest of what Jeff sent was for me, and only me.

Having met up him in-person a few times now, I know Jeff is big on "pack wars" at his LCS. I'm not sure, but I have to imagine that's how he managed to get so many extra 2014s to give away. (Go send him your want lists ASAP, by the way.)

He just about hit every angle of my 2014 A&G needs. Legends and current stars. Commons and short-prints. 'Fros and dreadlocks.

Jeff had all the bases covered. 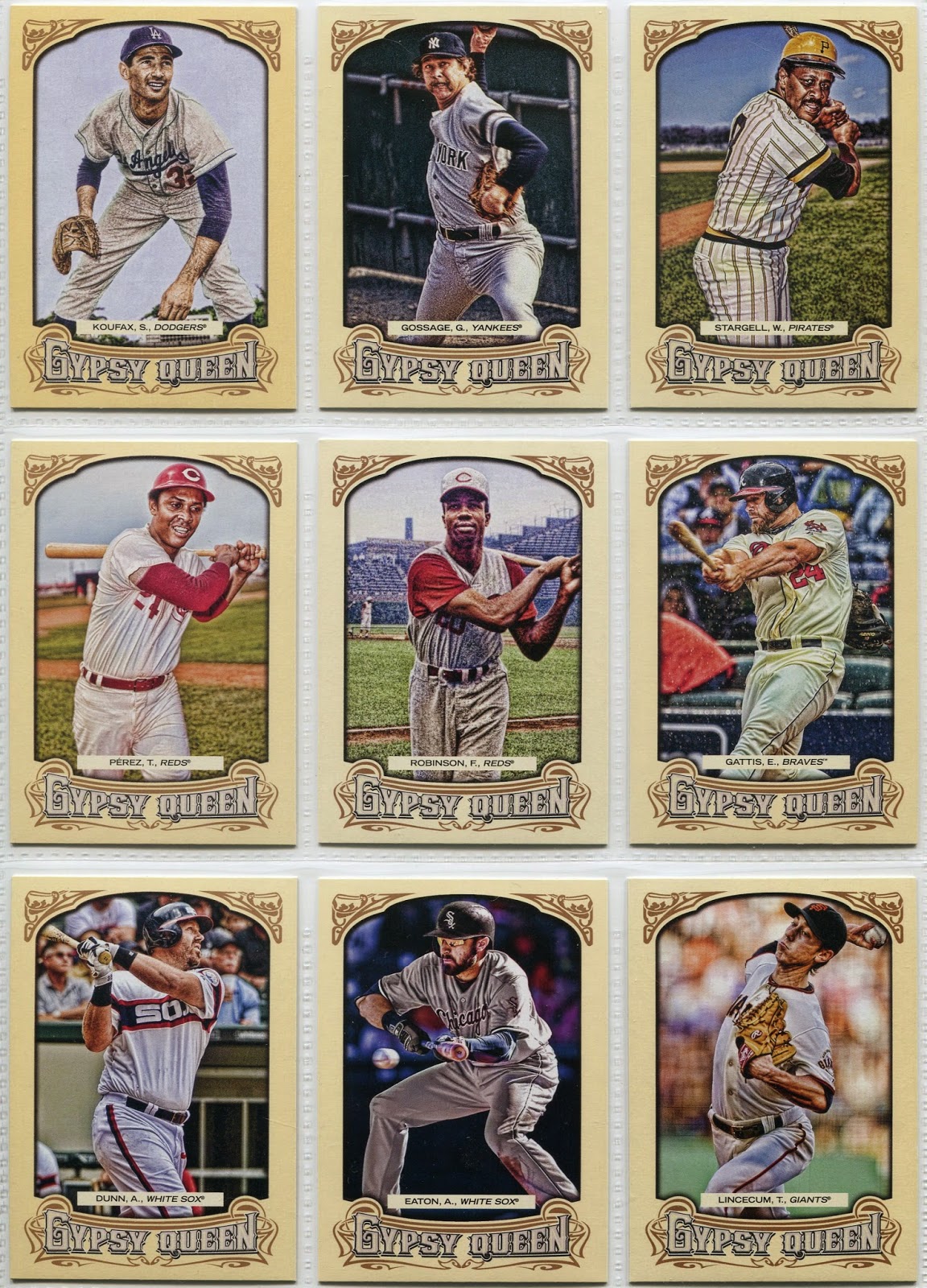 I feel like a hypocrite whenever people send me GQ singles.

I've put a lot of effort into bashing the brand over the course of this blog's history, and yet I put them up on my want lists like any other set. Jeff pretty much cut my 2014 GQ needs in half with the huge stack he sent.

I have to imagine the Dunn and Eaton were doubles, because ain't no way Jeff's letting throwbacks and bunting shots of Sox go. 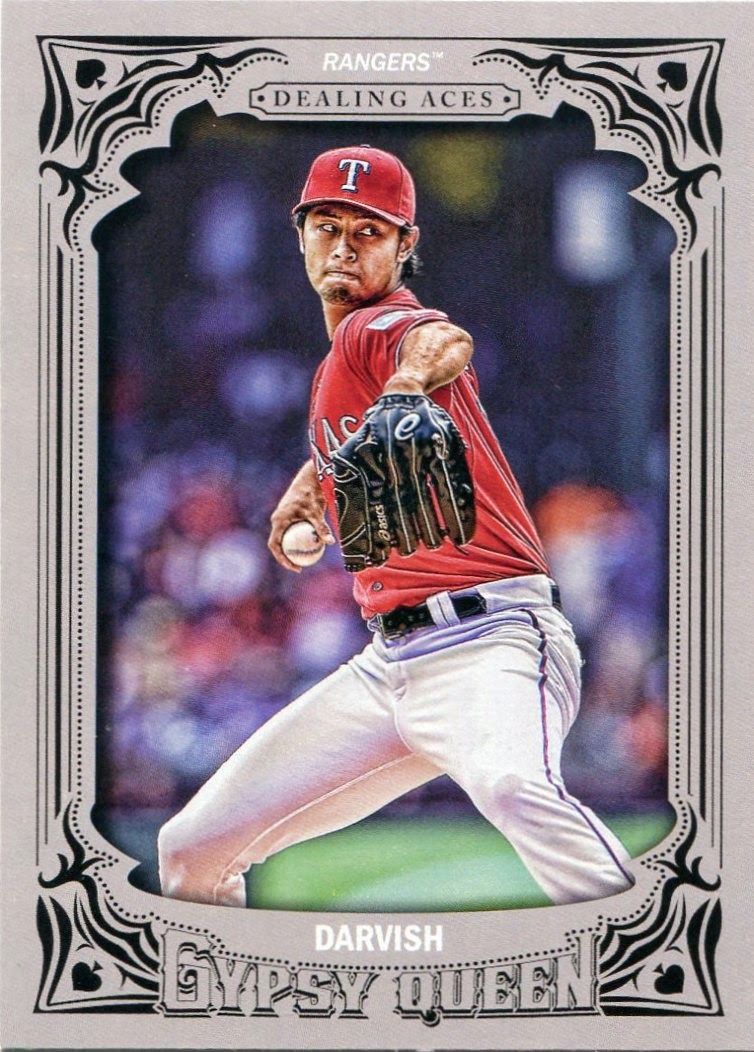 Jeff's GQ help extended to the inserts as well.

I think it's time to retire the "Dealing Aces" series, Topps. You've pretty much worn out your welcome on these by now.

It started out fine and good, but this is just plain boring. 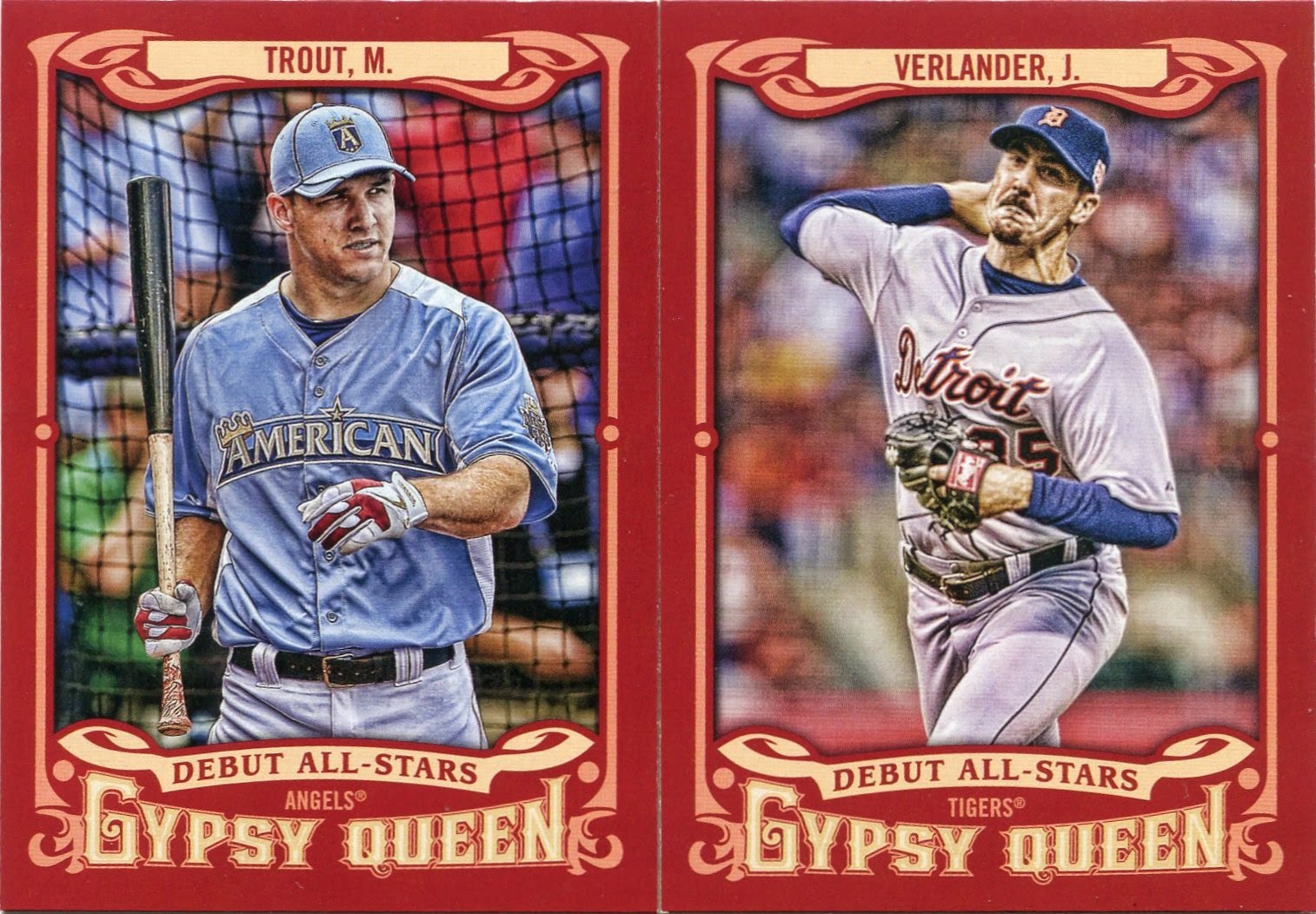 Red borders are cool, but these "Debut All-Stars" inserts are still fairly uninspired as well.

And please, please, MLB, can you for once design an All-Star jersey that doesn't look like it came straight out of beer league softball? 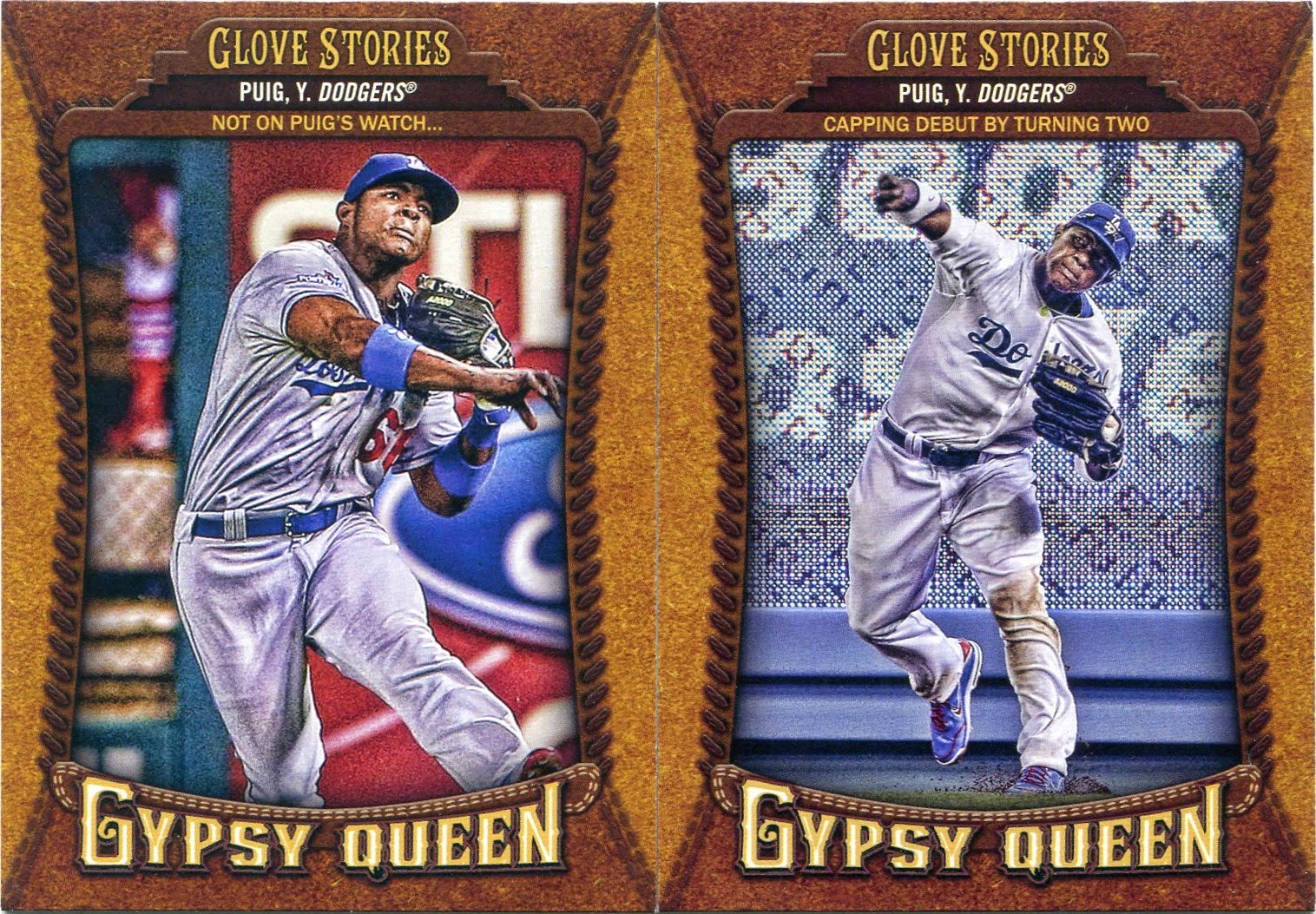 I've always liked GQ's "Glove Stories" series, but having the same guy show up twice within a ten-card insert set is incredibly redundant.

Then again, I guess that's to be expected considering the man crush Topps has on Puig. 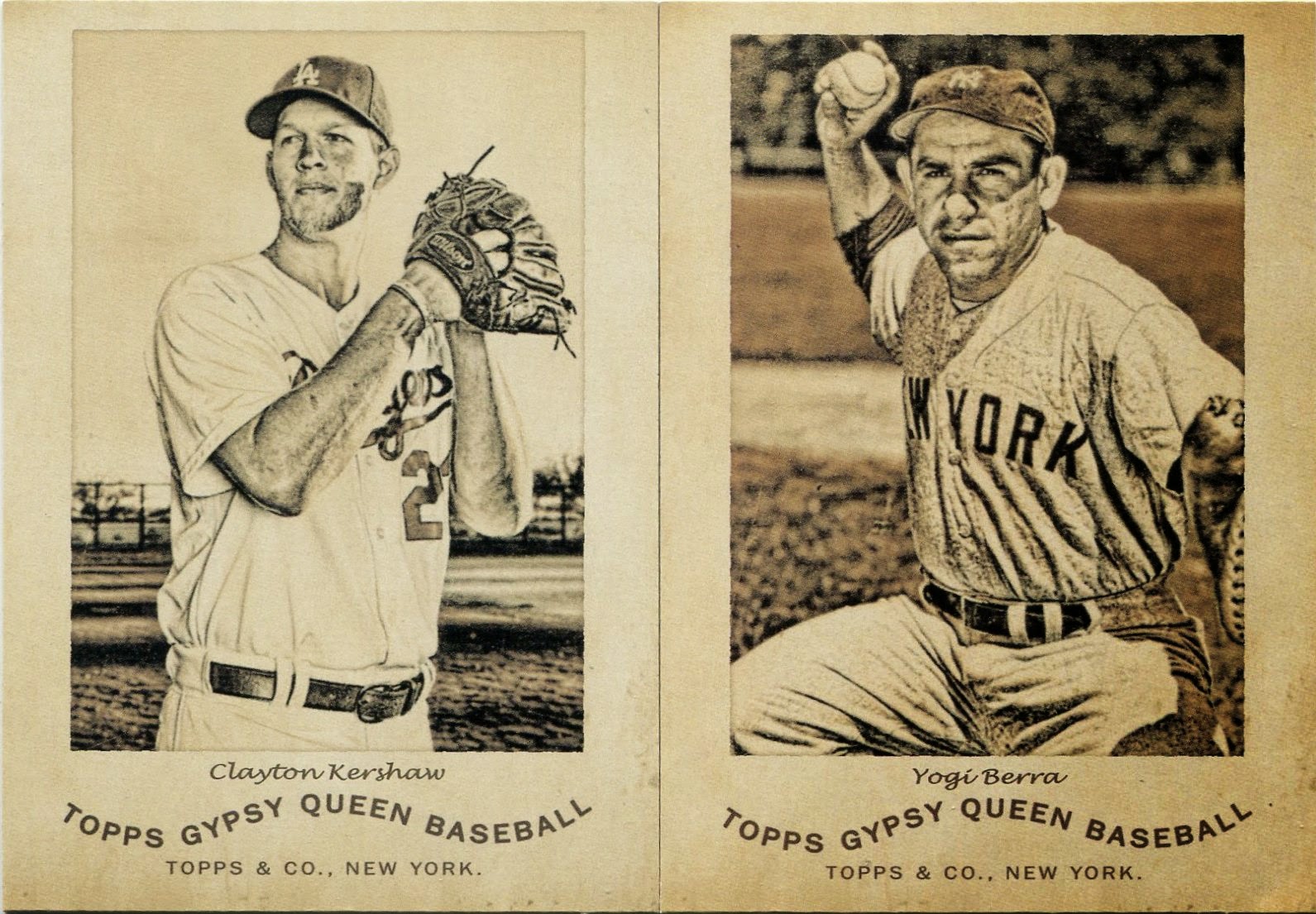 Seeing these makes me feel bad about all the bad things I've said about Gypsy Queen in the past.

They're that nice. I feel like they belong in one of those $200-a-pack products or something. And yet there's probably a few of them sitting on the racks of my local Target at this very moment.

Try and get a glimpse of one of these beauties in-person if you haven't already.

You won't regret it. 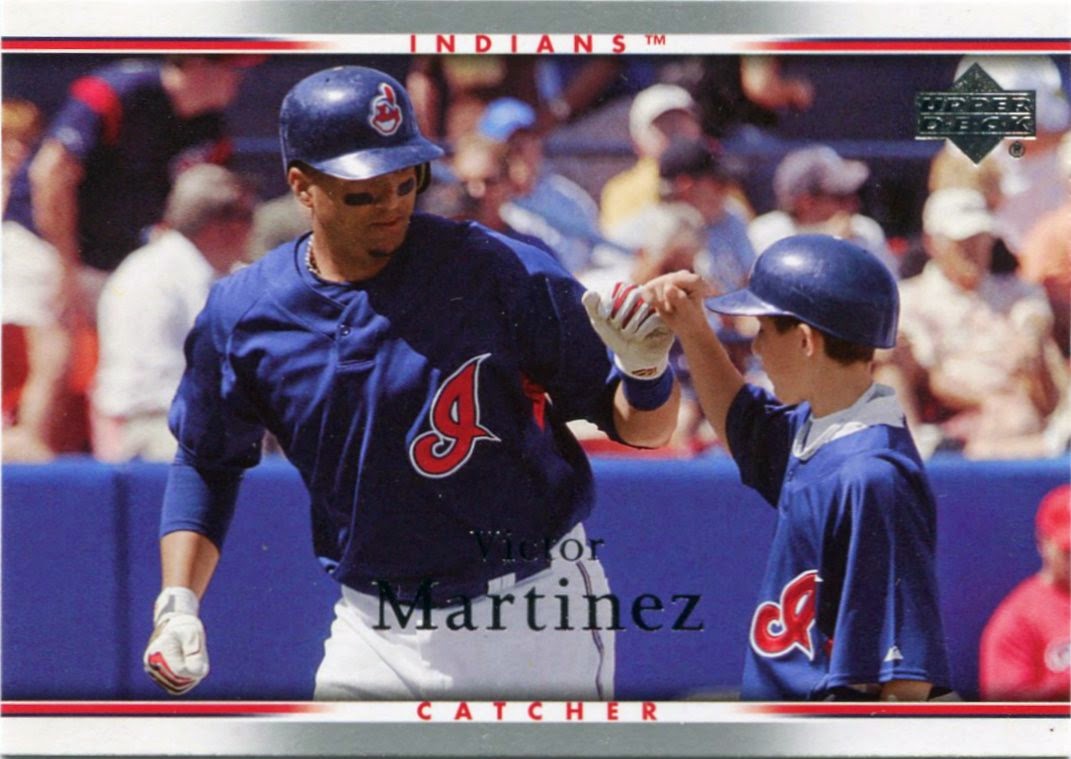 Because Jeff is an awesome guy, he didn't stop with the massive amount of hand-picked 2014 needs he sent me.

Also included were a few other randoms for my binders. Here's a neat "cards with kids" mini-collection hit from UD.

Those gigantic mid-2000s Upper Deck checklists are the gifts that keep on giving. 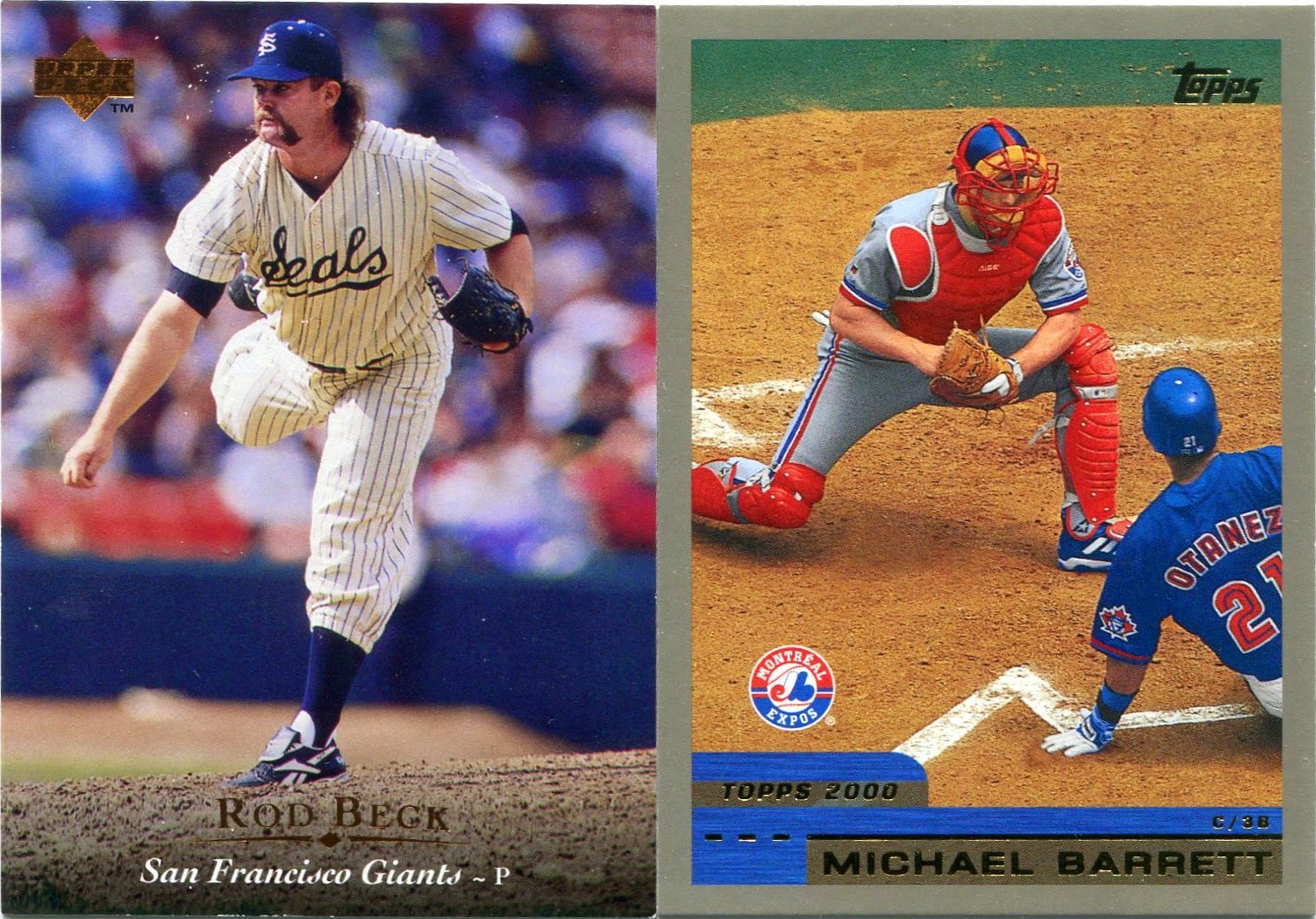 Jeff collects throwbacks, so that Beck was definitely a dupe for him. The Barrett is a staggeringly nice PATP from what is an incredibly dull set in 2000 Topps. Probably one of the bottom-five Topps sets ever, if I had to rank them.

I'll have to get around to making that list one day. 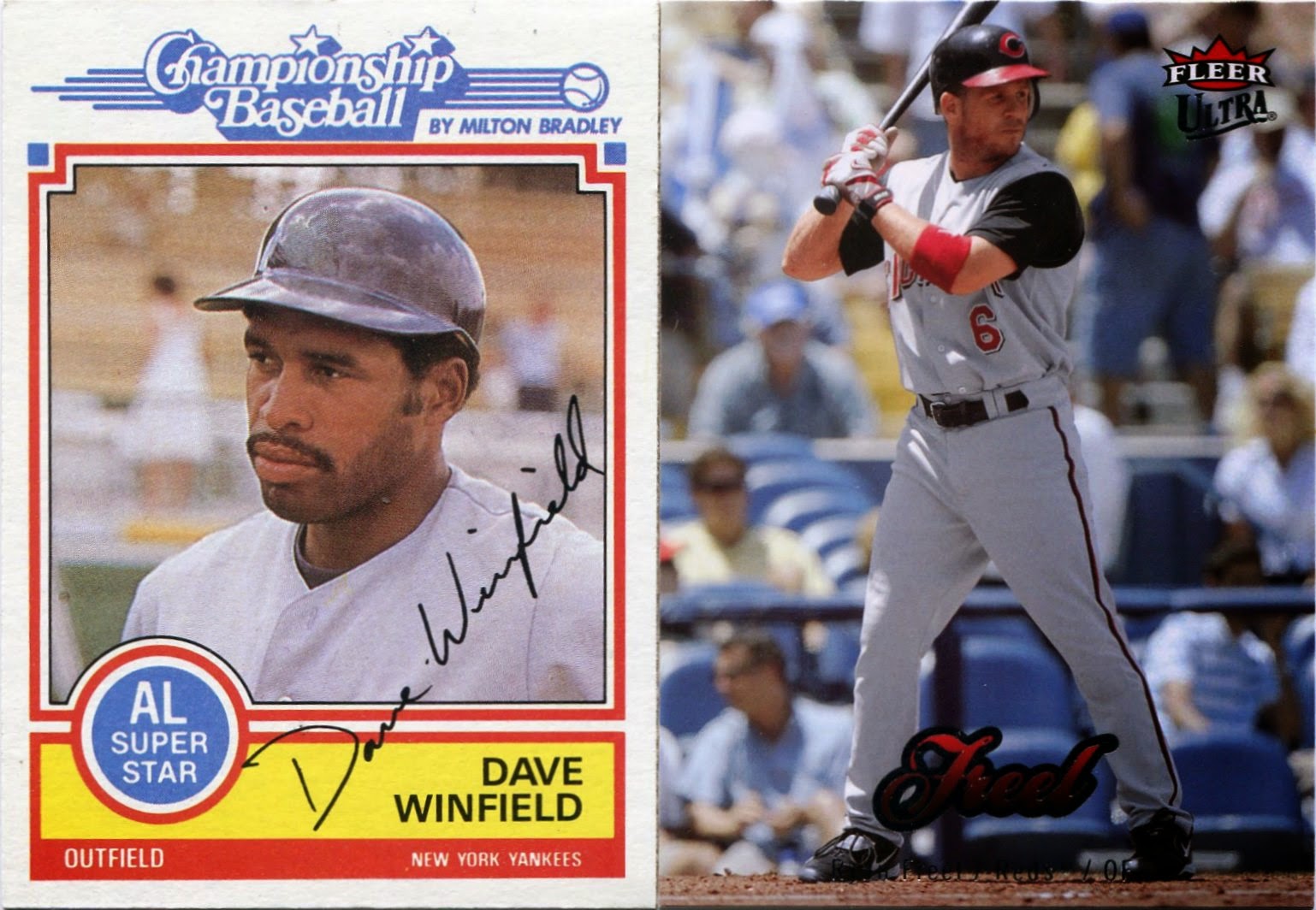 Still, the randoms weren't all for my mini-collections.

I've been trying to pick up more Ryan Freel cards in honor of the late outfielder. The Winfield, on the other hand, is one of those Championship Baseball oddballs that I've come to love so much.

You can thank repacks for that. 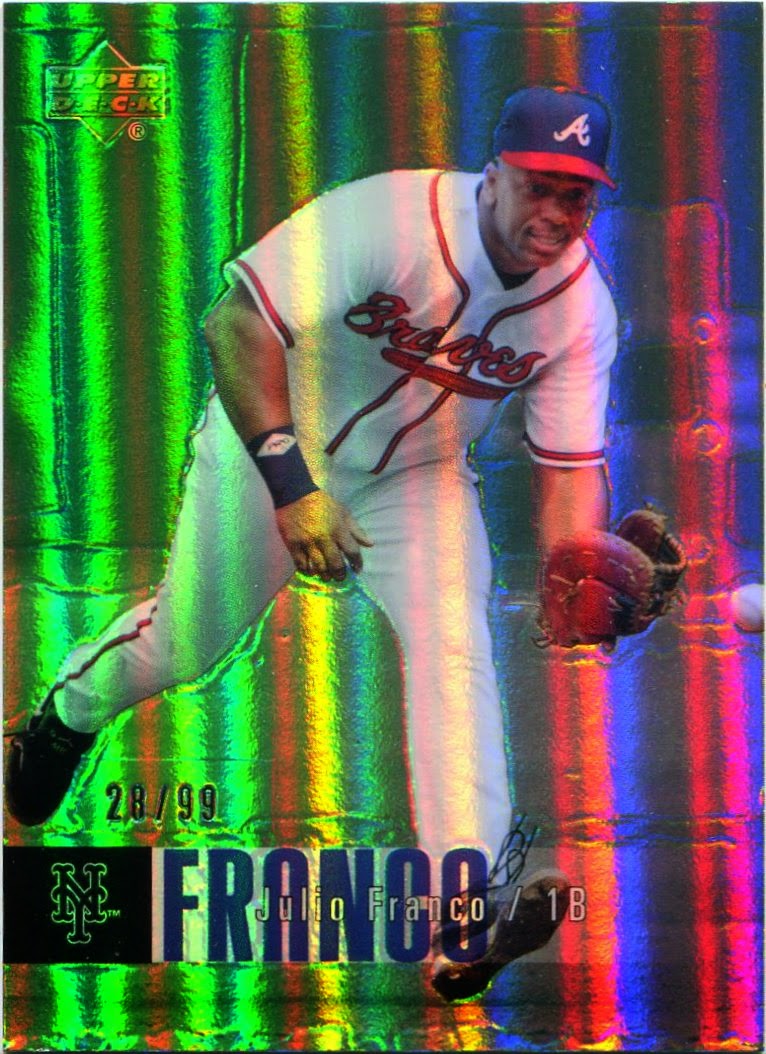 Jeff closed things out by adhering to rule #3,854 of my collection.

You can NEVER go wrong with sending me Julio Franco cards.

I don't know if Jeff knew it at the time, but I am, in fact, a big Julio Franco collector. Honestly, how can I not be a fan of a guy who played in the majors until he was forty-nine?

Julio Franco is the man.

Now, if you'll excuse me, I'll just be going back to my schoolwork now. One more week of finals and that's all she wrote for this semester. I'll post when I can, but don't be surprised if my blogging remains sporadic up until then.

Ahhhhhhhh, wouldn't it be great if I could major in baseball cards?

Just don't major in Geography there's only one thing you can do with Geography. At least with English there's like six things.

I love that Bourdain card.

I guess I have something in common with your mom. I went out and bought that Anthony Bourdain card for myself. And I was tempted to buy the relic. I probably bid on a couple but lost.

I have that very Berra. A cool insert set! Enjoy the holiday break!

I sent that Franco cuz damn - that thing is SO LOUD! But good to know I can send you any Francos I come across. I mean, the guy played until he was like 80 or something.

Live first, blog second. The Bourdain card would be better with some food stains on it.

I am going to have to find a copy of Bourdain's card. I recall a picture on his Facebook feed of him signing some A&G cards at the Topps office.