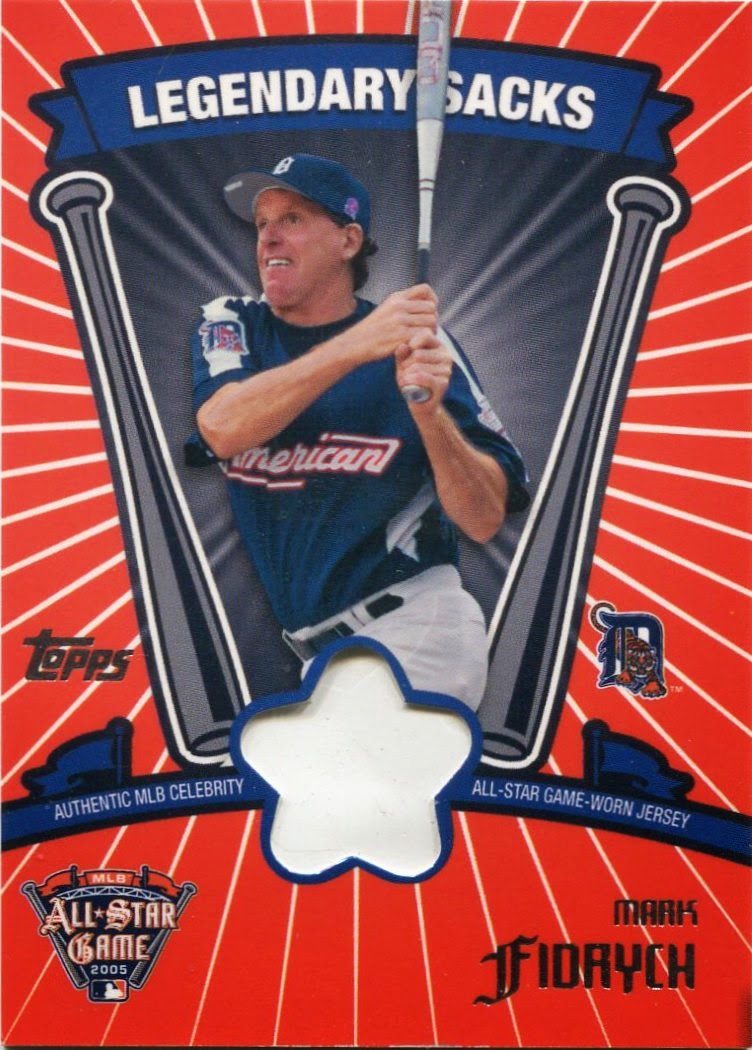 As usual, Christmas has come and gone far too soon this year.

I ate like a king, sat on my butt, and, most importantly, spent some quality time with the family this holiday season. And, yes, there were some jolly good Christmas presents thrown in the mix for good measure.

The big gift from my mom was a gift certificate to Just Commons, which will definitely come in handy once 2015 Topps hits the shelves. It'll take a lot of willpower not to spend it by then, but I think it can be done.

If you've tuned into this blog over the past few Christmases, you might already know that my dad likes to customize his cardboard gifts to me, scrounging COMC and other sources for singles he thinks I'll enjoy. He handed me three separate presents last afternoon, all with cards inside.

The first gift revolved around Mr. Mark Fidrych. "The Bird" is an all-time favorite of both my dad and myself, and we've both gone to great lengths to track down every possible card we can find of the curly-haired hurler.

While the description says it's a piece of jersey, I'm pretty sure the card you see above actually features a game-used base from the 2005 Celebrity All-Star game. This beauty is numbered to just 300 copies and absolutely blew me away when I first laid eyes on it. My dad calls it the ultimate "pitcher at the plate" card. 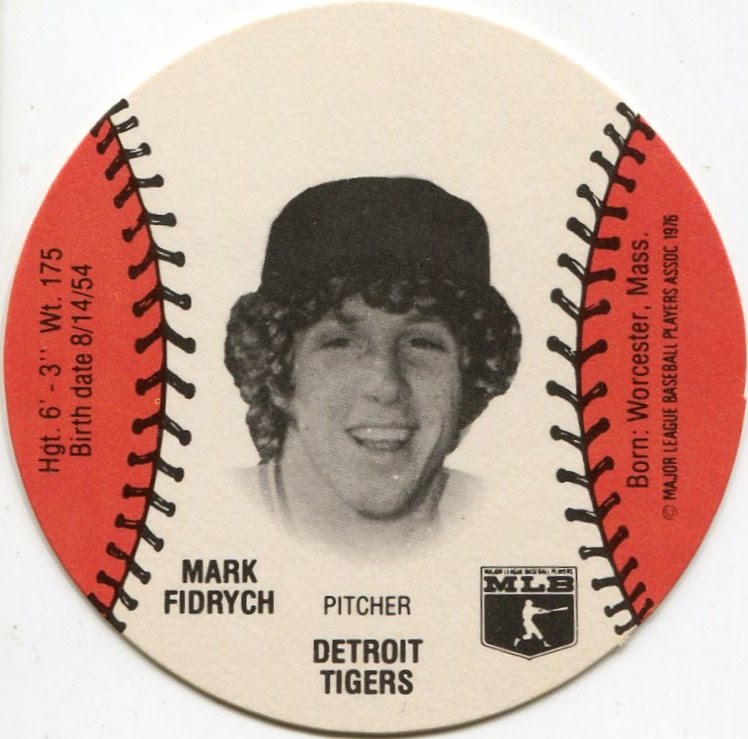 Aside from that, nearly everything else my dad got me this Christmas was good ol' vintage.

The second piece of the two-card Fidrych lot was this sweet oddball. I've lost count of how many different companies released these disc-shaped singles in the '70s, but I'm sure glad to pick up any I can.

The two Fidryches alone would've easily sufficed for the holiday, but you know my dad couldn't stop there. 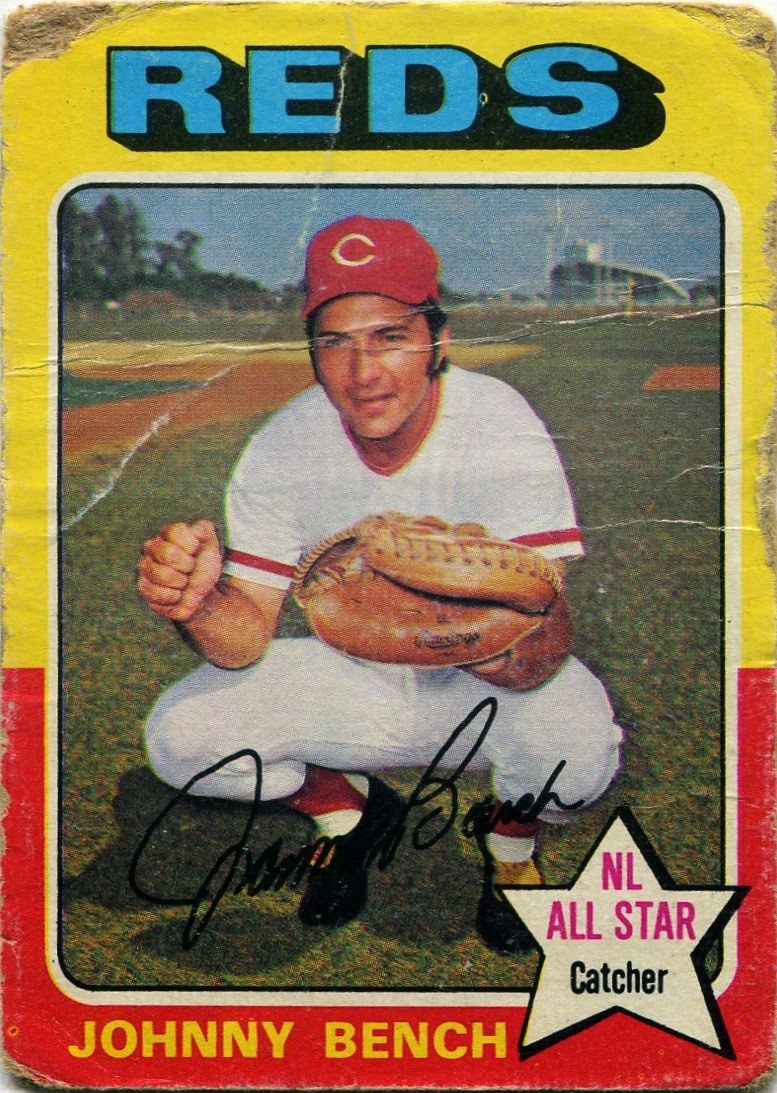 This Christmas was a little different in terms of how my dad went about choosing gifts for me.

Since he's always worried about buying cards I already have, my dad asked me to put together a big want list with some of my various vintage needs. That way, he'd be safe from doubles and, at the same time, I wouldn't know exactly what I'd be getting. The best of both worlds.

The cards from this list comprised the second present my dad handed to me yesterday. One of them was this '75 Topps Johnny Bench. I've specifically looked for this gem at the last three or four card shows I've attended and come up empty every time. It was really starting to gnaw at me.

Thankfully, my dad finally came through with this well-loved copy, fresh with the marks of an enthusiastic young collector from the '70s. 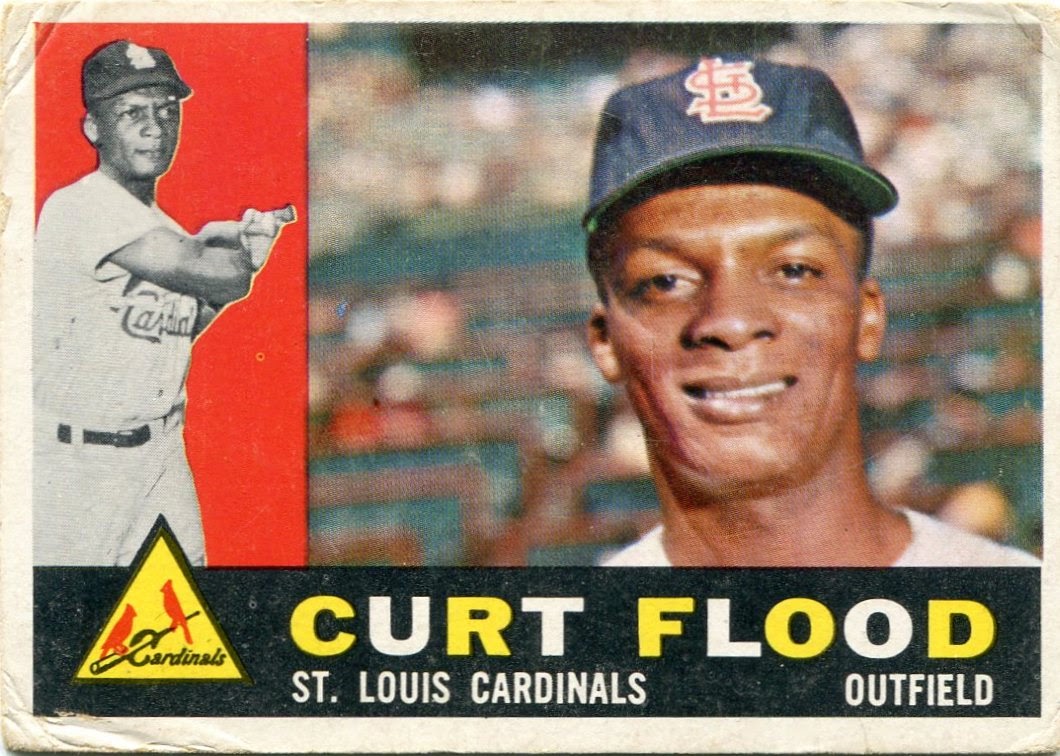 My dad has a pretty good handle on who I collect.

While the Mantles and Koufaxes of the world are great, neither my dad nor I have a prayer of being able to afford a lot of of the bigger names most of the time.

That's why I've taken to chasing the Curt Floods of the baseball universe. There's little doubting that Flood was one of the more impactful guys to ever play the game. And yet you can still get his cards at bargain-basement prices.

Flood me in Curt Floods, and I'll be happy. 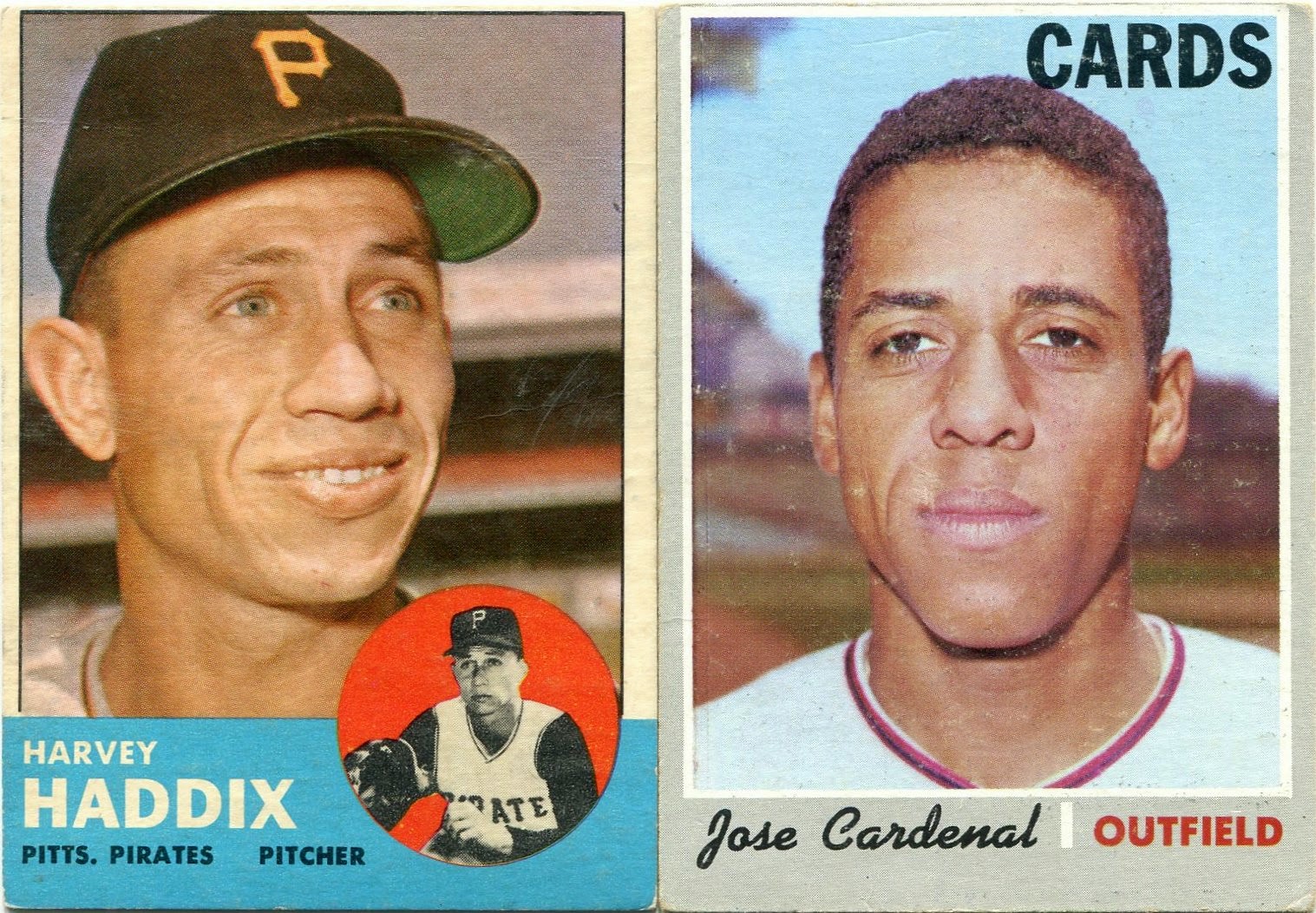 Here are a couple other cult favorite guys that can be had on the cheap.

Harvey Haddix, of course, is known for tossing twelve perfect innings in a 1959 contest. I've been a devoted fan of his ever since I first read about his moment in the sun as a kid.

The more and more I learn about Jose Cardenal, the more and more I realize how much I love to collect the guy. That '70 Topps high-number means that I know have every card of the former outfielder, apart from his '65 Topps multi-player rookie. 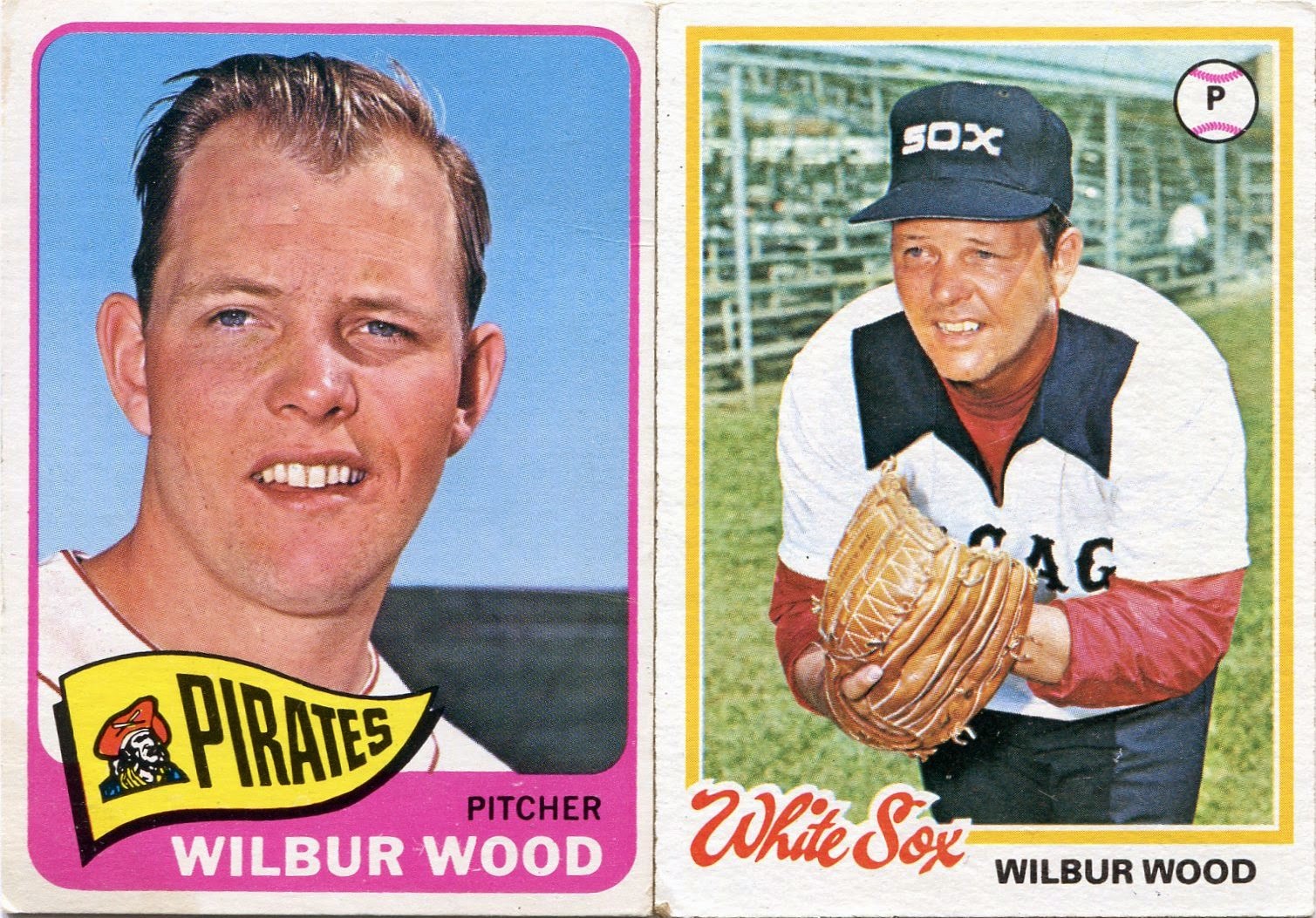 With these two, I'm down to needing just Wood's 1968 Topps issue for a complete Topps set. I can't honestly tell you how that '78 Topps common eluded my clutches all these years.

All that matters is that I have it now. 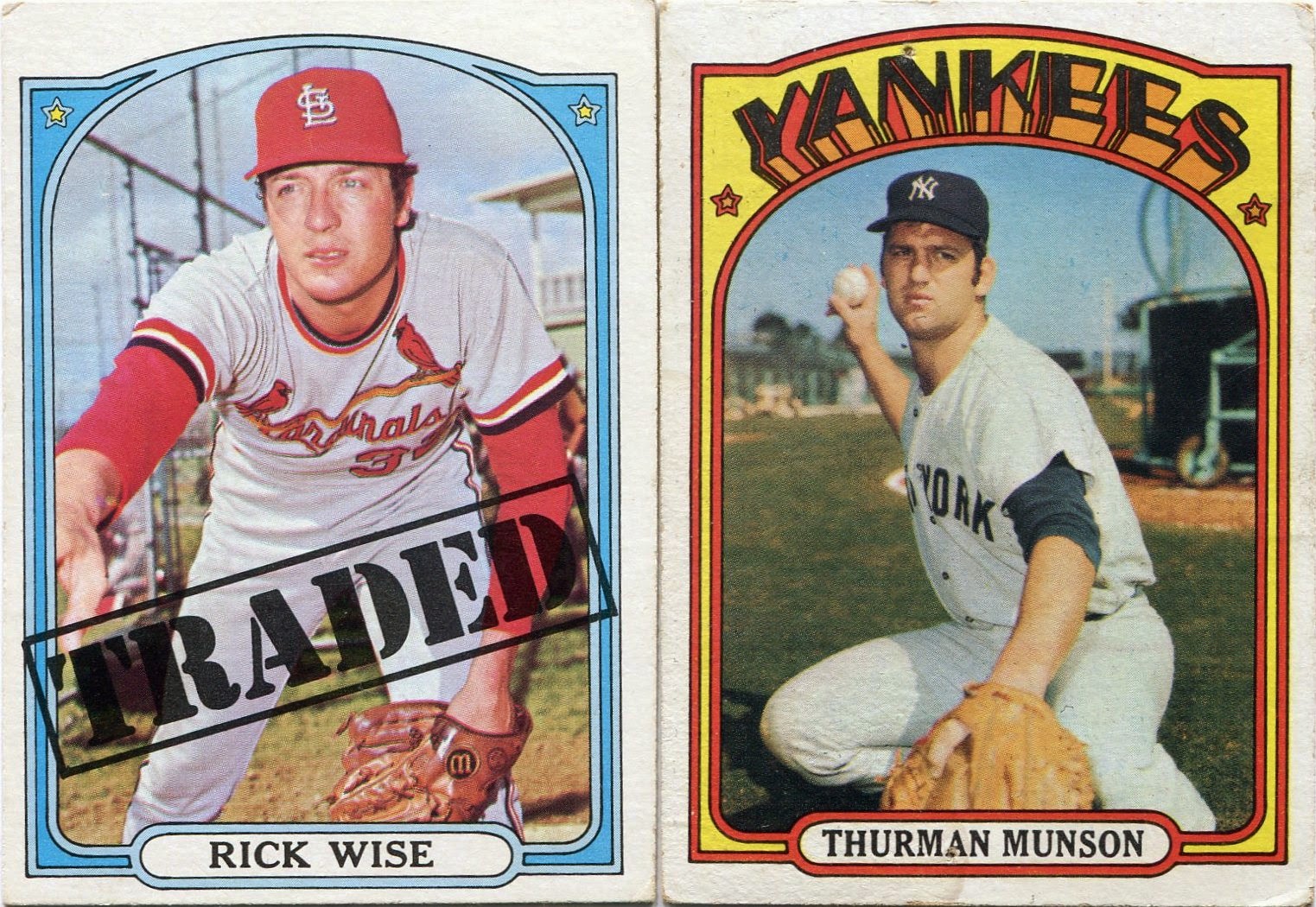 I tried to make my Christmas list as varied as possible.

It didn't have a whole lot of rhyme or reason to it, which shouldn't come as a surprise to anyone who reads this blog.

Everyone from Rick Wise to Thurman Munson was bound to pop up in some way, shape, or form. 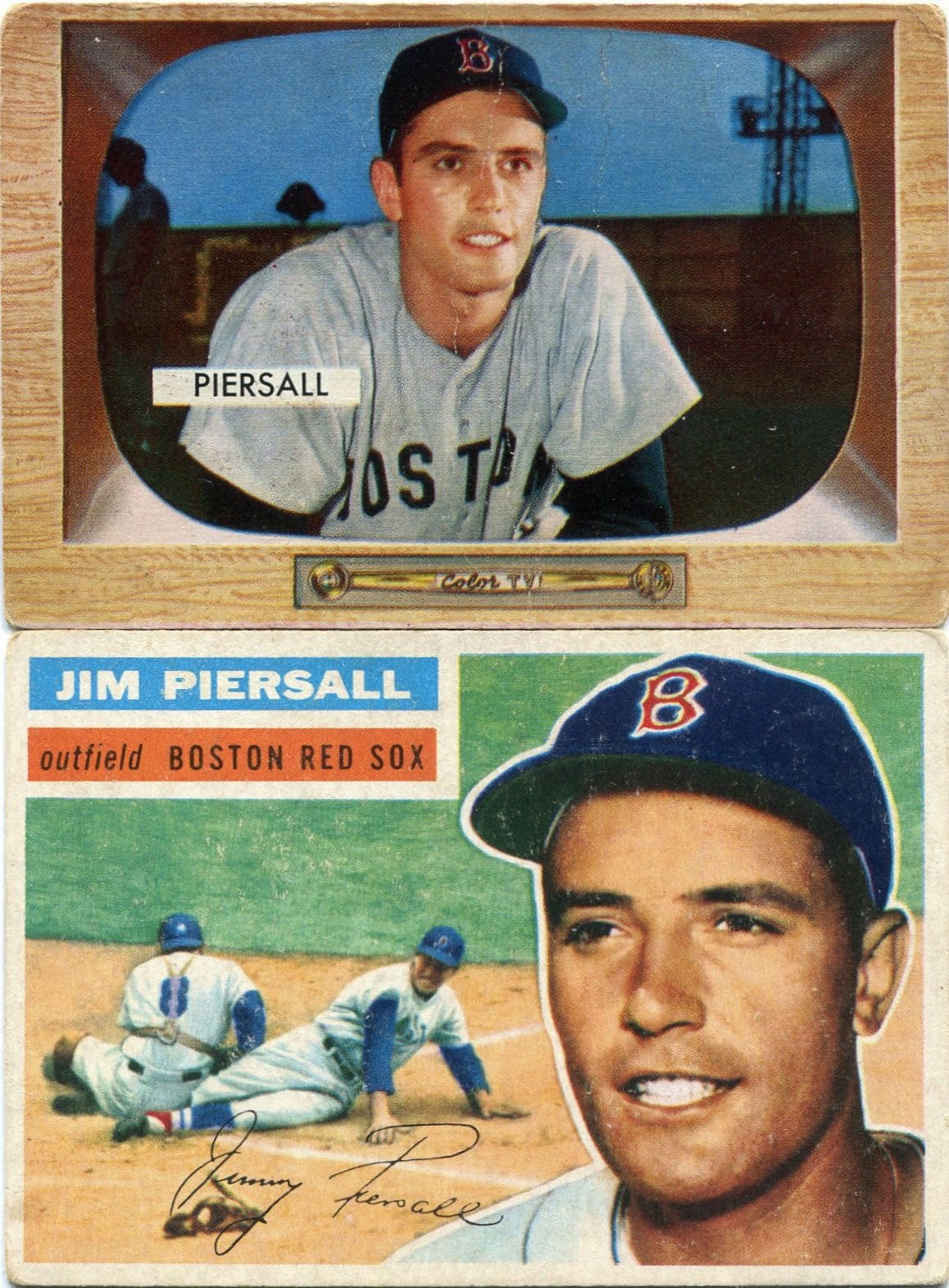 I've decided to make a push to obtain a complete Topps set of Jimmy Piersall.

I have all of his base Topps singles from 1958 to his '67 sunset card. My dad brought me one step closer with Piersall's spectacular '56 Topps single. That awesome play at the plate sums up the beauty of '56 Topps far better than words ever could.

The '55 Bowman Piersall was icing on the sweet, sweet cake. 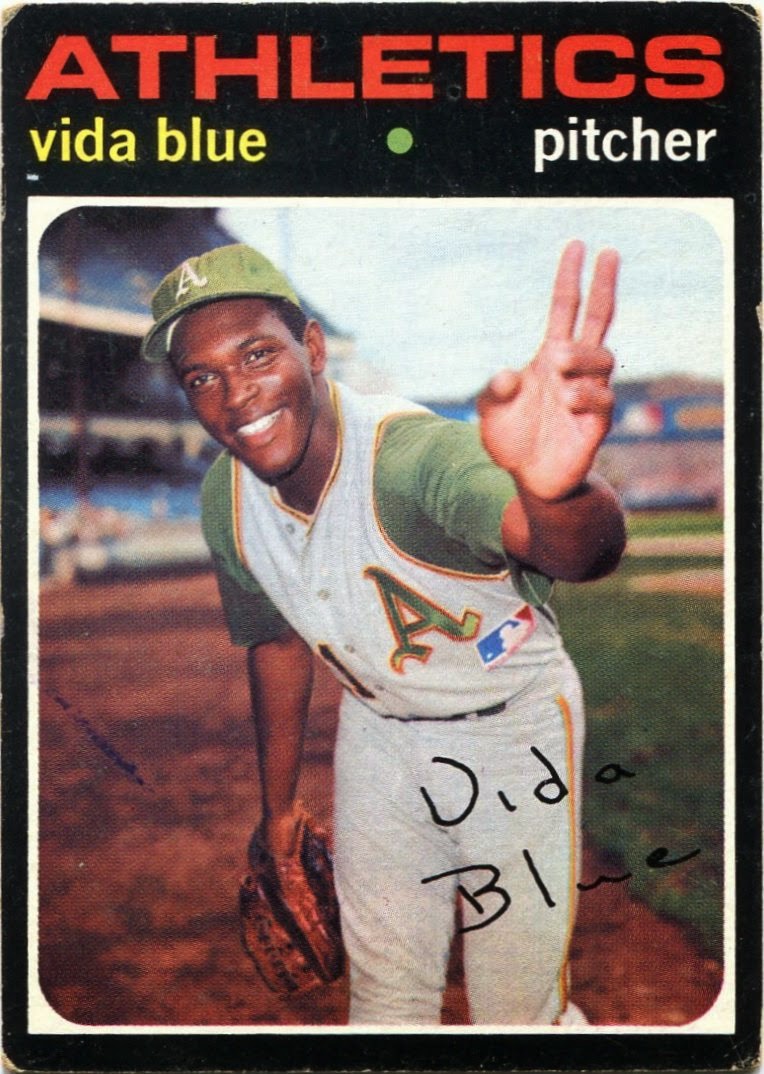 As far as standard Topps cards go, however, this was the real coup from my dad.

I have been searching for Vida Blue's 1971 Topps single for years without any luck. To me, this card is pretty much cardboard perfection. The only thing missing was actually owning a copy of it.

I can't explain why it was so hard to find. It's a high number (#544), but not a hopeless high-number. And yet, until this Christmas, I'd never even sniffed having one to call my own.

I guess I'm not the only one to see the magnificence in this stunning baseball card. 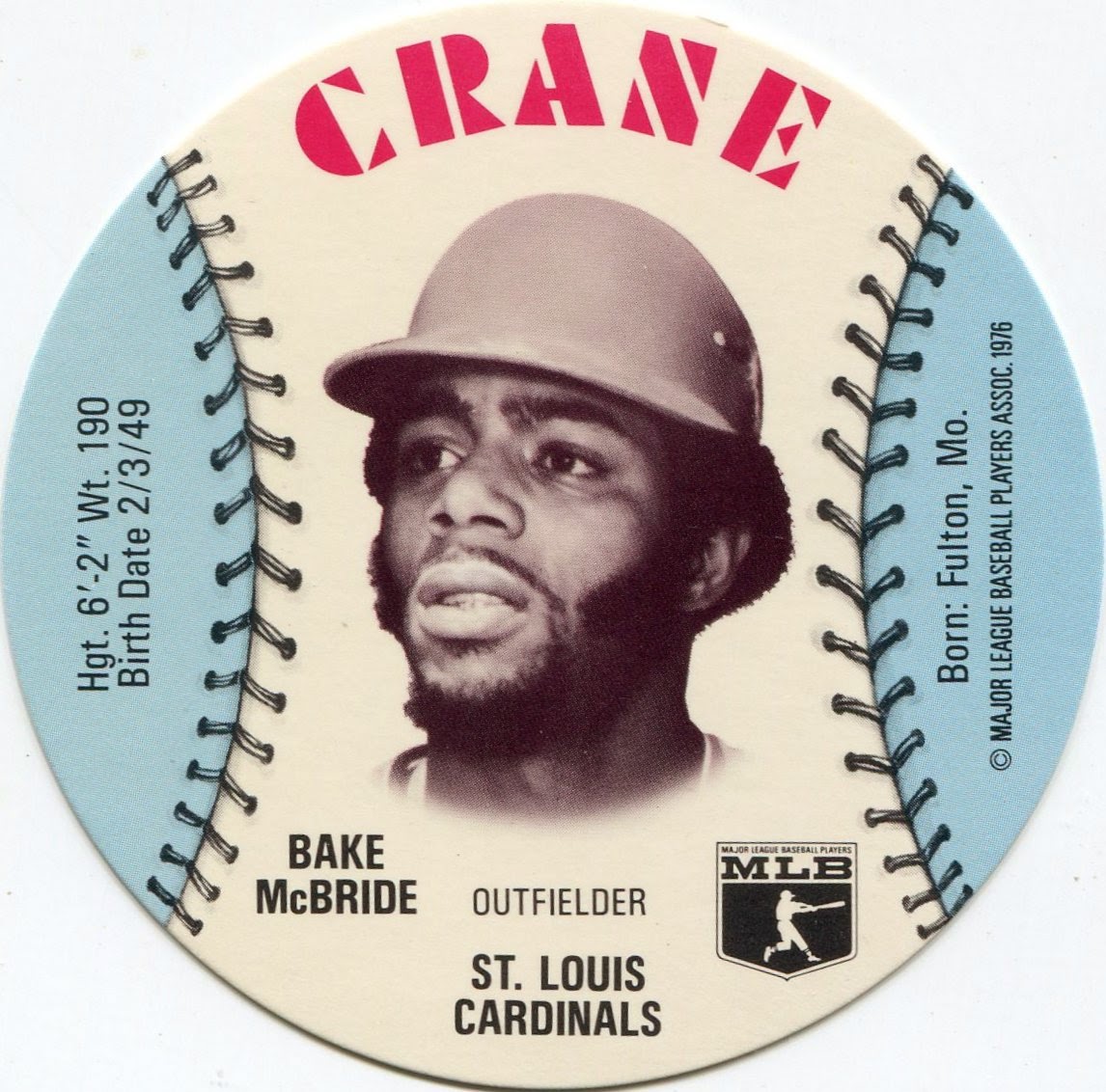 The rest of this second gift was about as oddball-centric as it gets.

I didn't specifically put this nifty Bake McBride disc on my list, but I'd told my dad about my recent decision to start collecting Bake McBride.

I guess he listened.

Speak of the devil.

There's Bake again next to a couple of his '75 mini buddies. 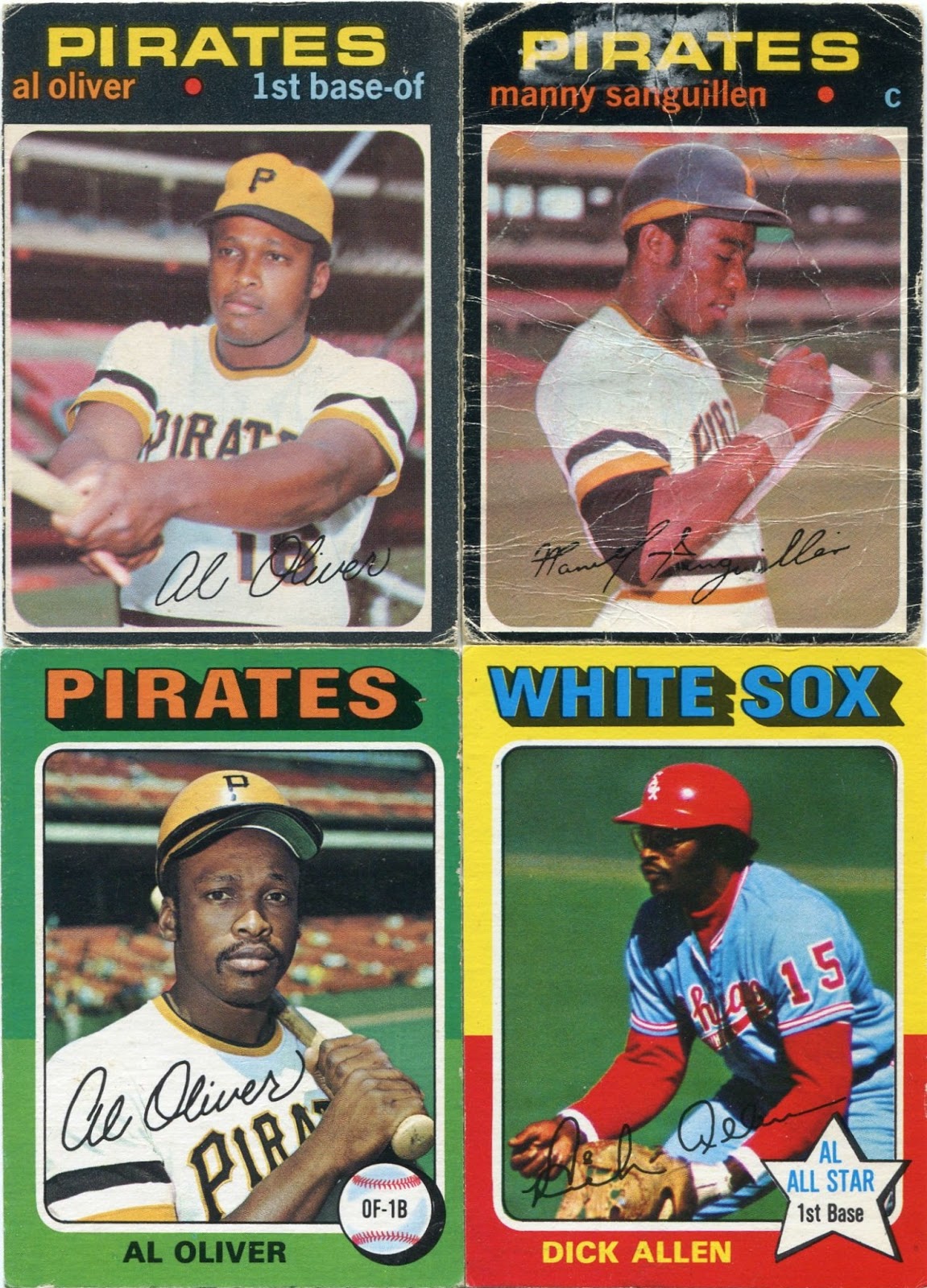 Since I'm such a big fan of Al Oliver, Manny Sanguillen, and Dick Allen, you'd think I'd have all these standard cards of theirs by now.

I think it is. 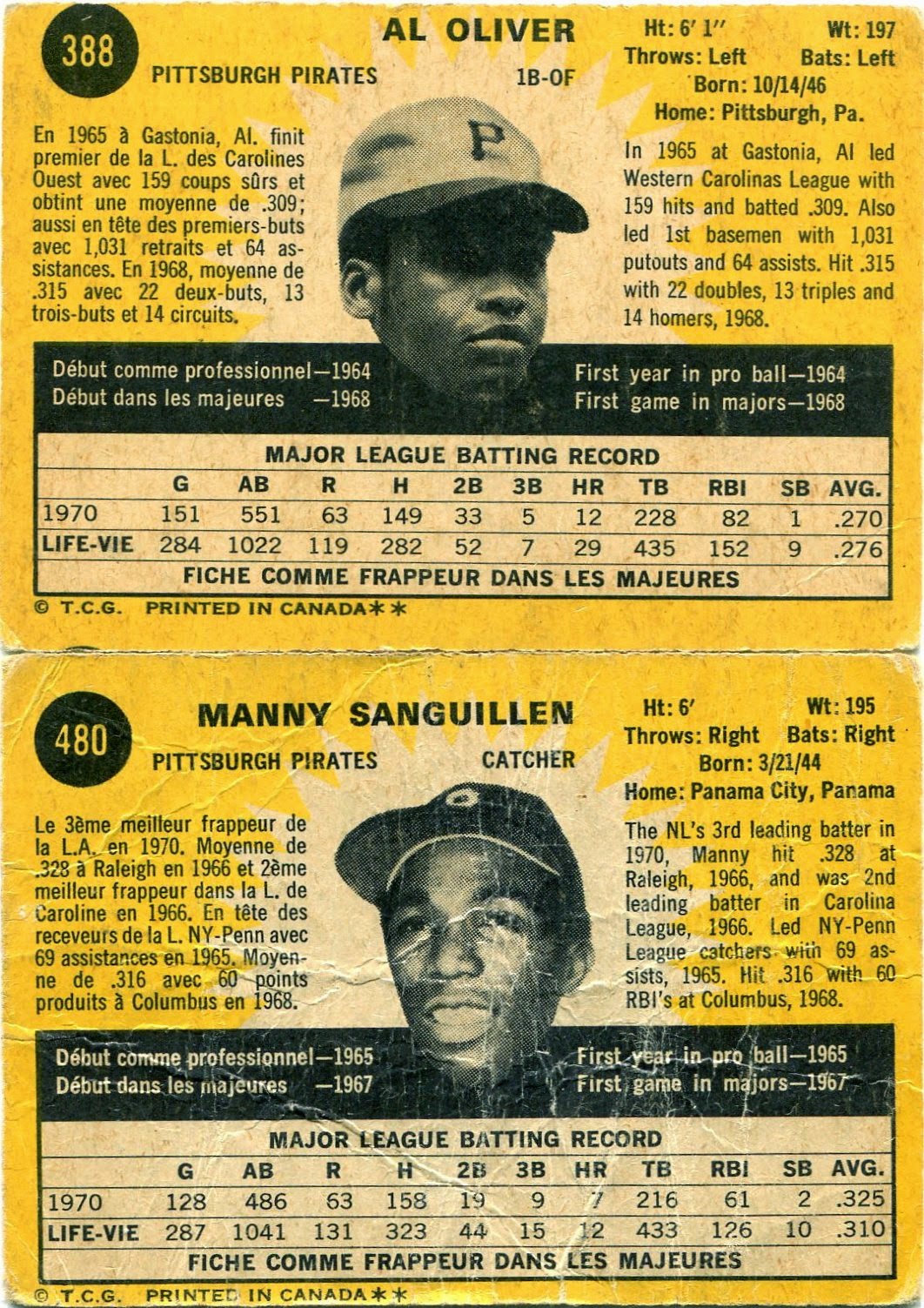 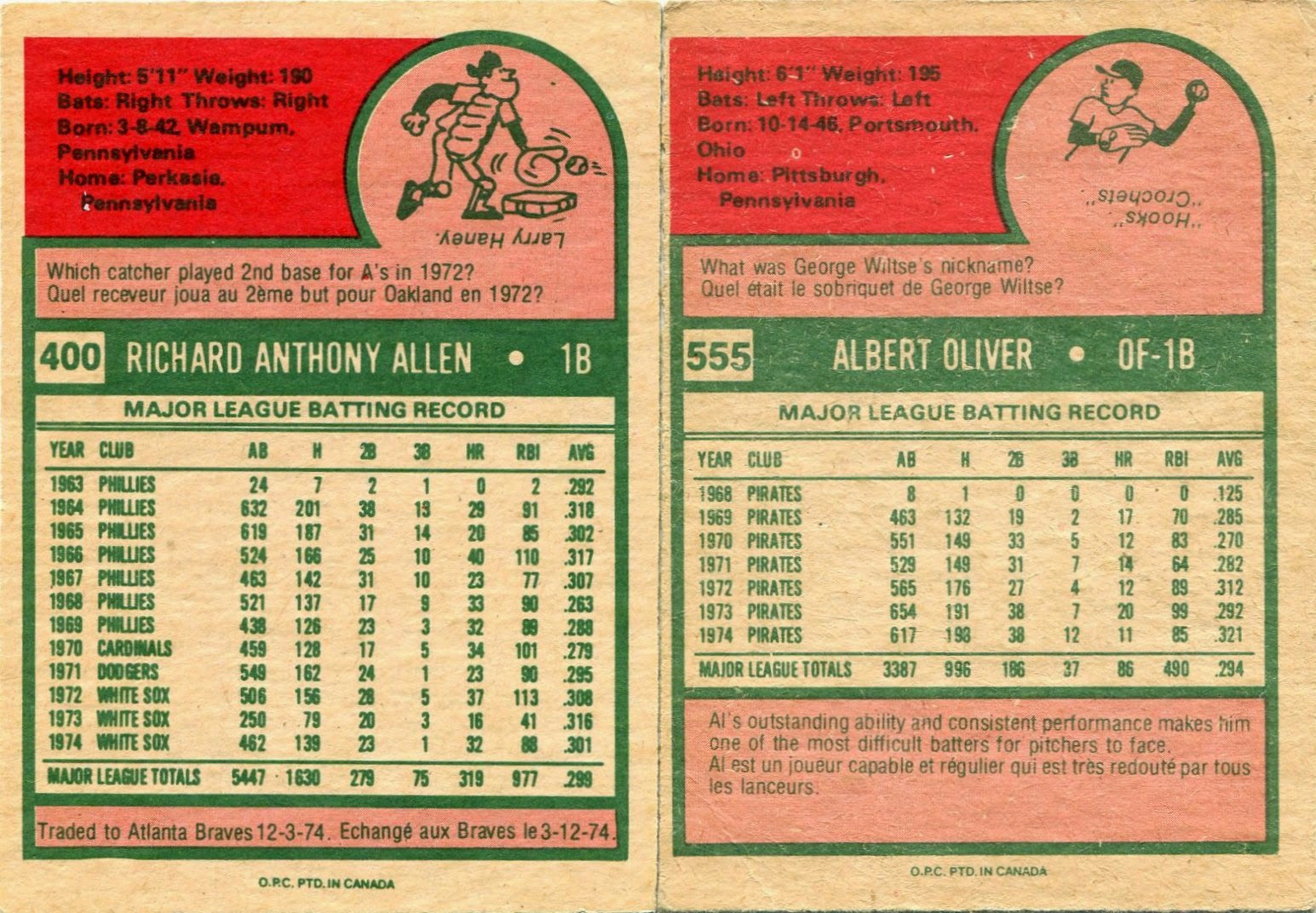 My dad still isn't sold on the awesomeness of vintage OPCs, but I'll convert him one of these days. The '71s feature some of the best backs ever, and there's something about seeing French on a baseball card that is oddly pleasing.

In fact, the worn Sanguillen was one of my favorites from my dad's stack of gifts.

It shows that some kids loved their OPCs just as much as their Topps. 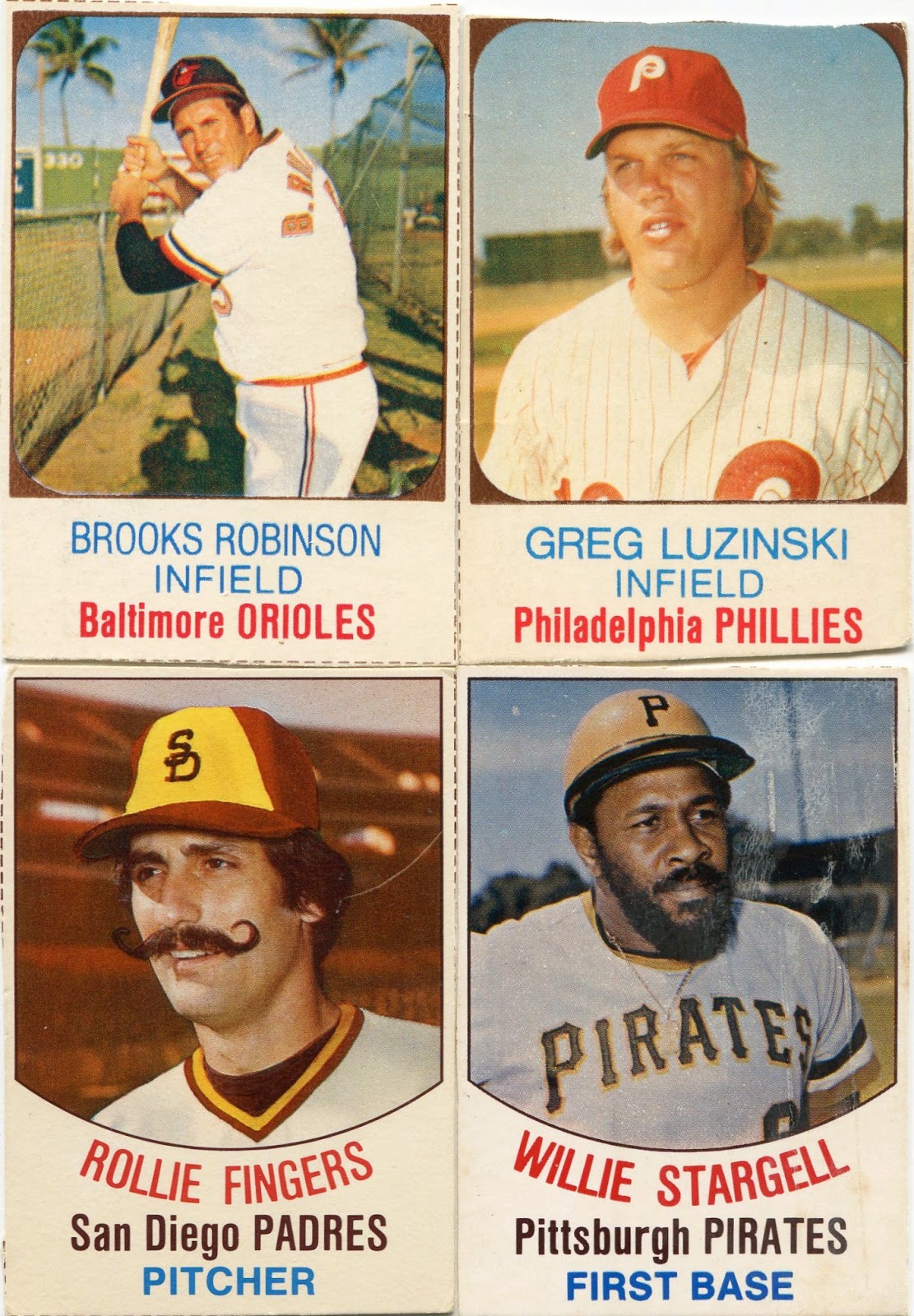 Here's where my holiday started to get especially tasty.

As you can imagine, I put a whole bunch of Hostess on my Christmas list, and my dad came through with this quartet of stars.

Even better than that, however... 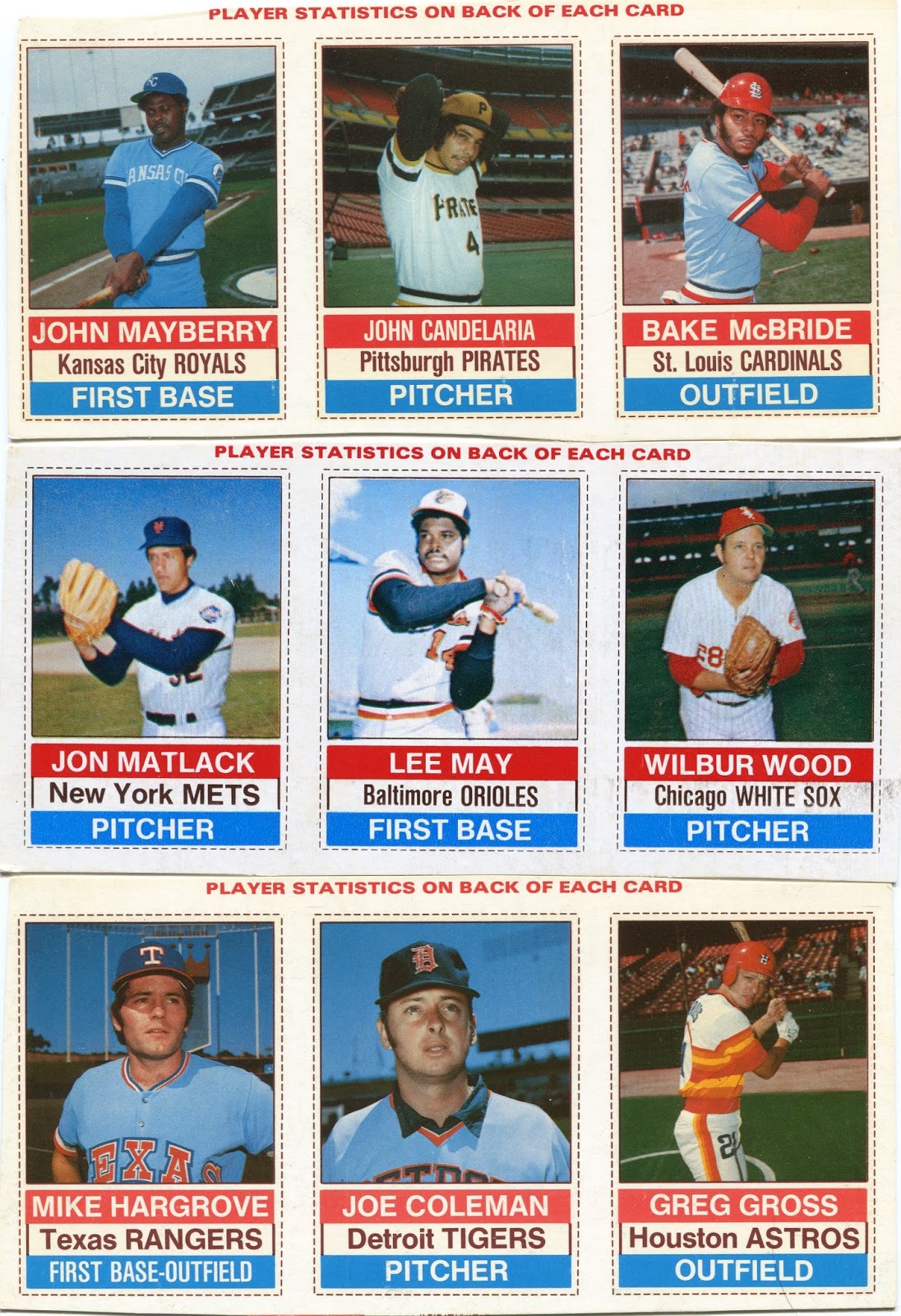 ...was the trio of uncut Hostess panels my dad found for me.

I've always wanted one of these, but I didn't think many existed. I figured most kids cut up the panels as soon as they hit their family's kitchen table. I know my dad did. The ones that did exist surely went for big bucks.

Or so I thought. My dad said he won these three panels from an Ebay auction for around two bucks combined. Hey, look, there's Bake and Wilbur again.

I don't know whether these came on the backs of Twinkies or Ho-Hos or Zingers or Cupcakes or Ding-Dongs or...

I'm starting to get hungry. 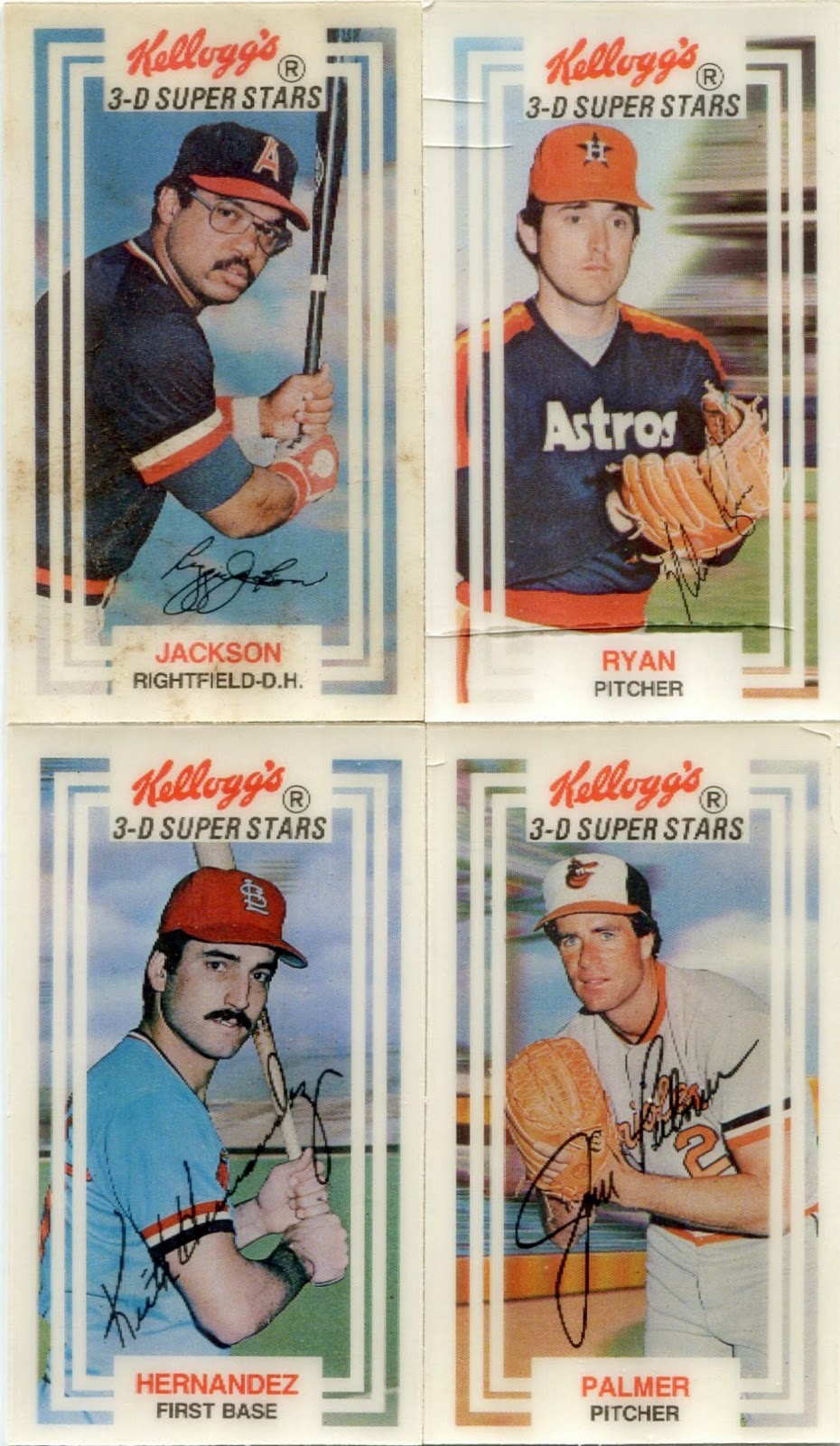 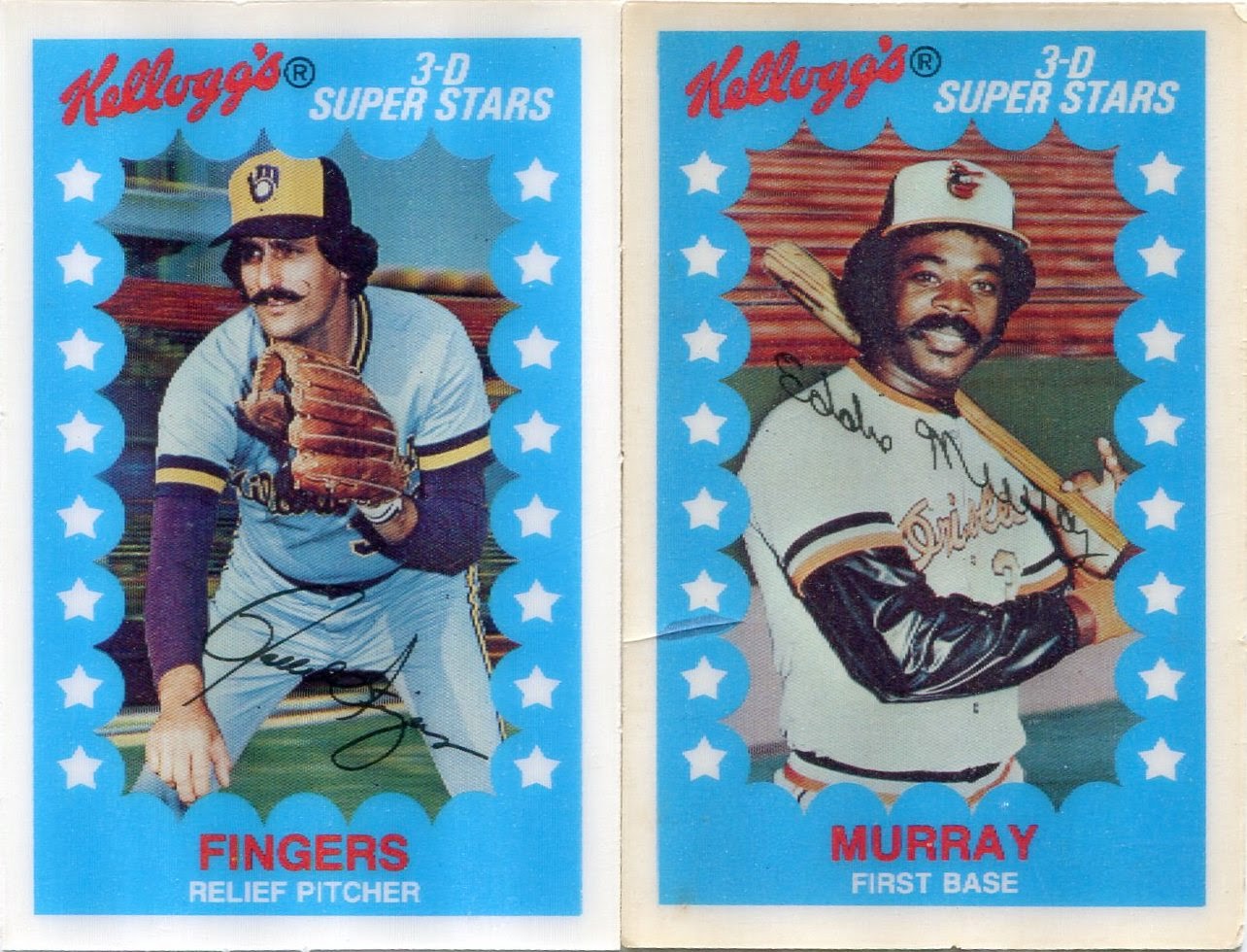 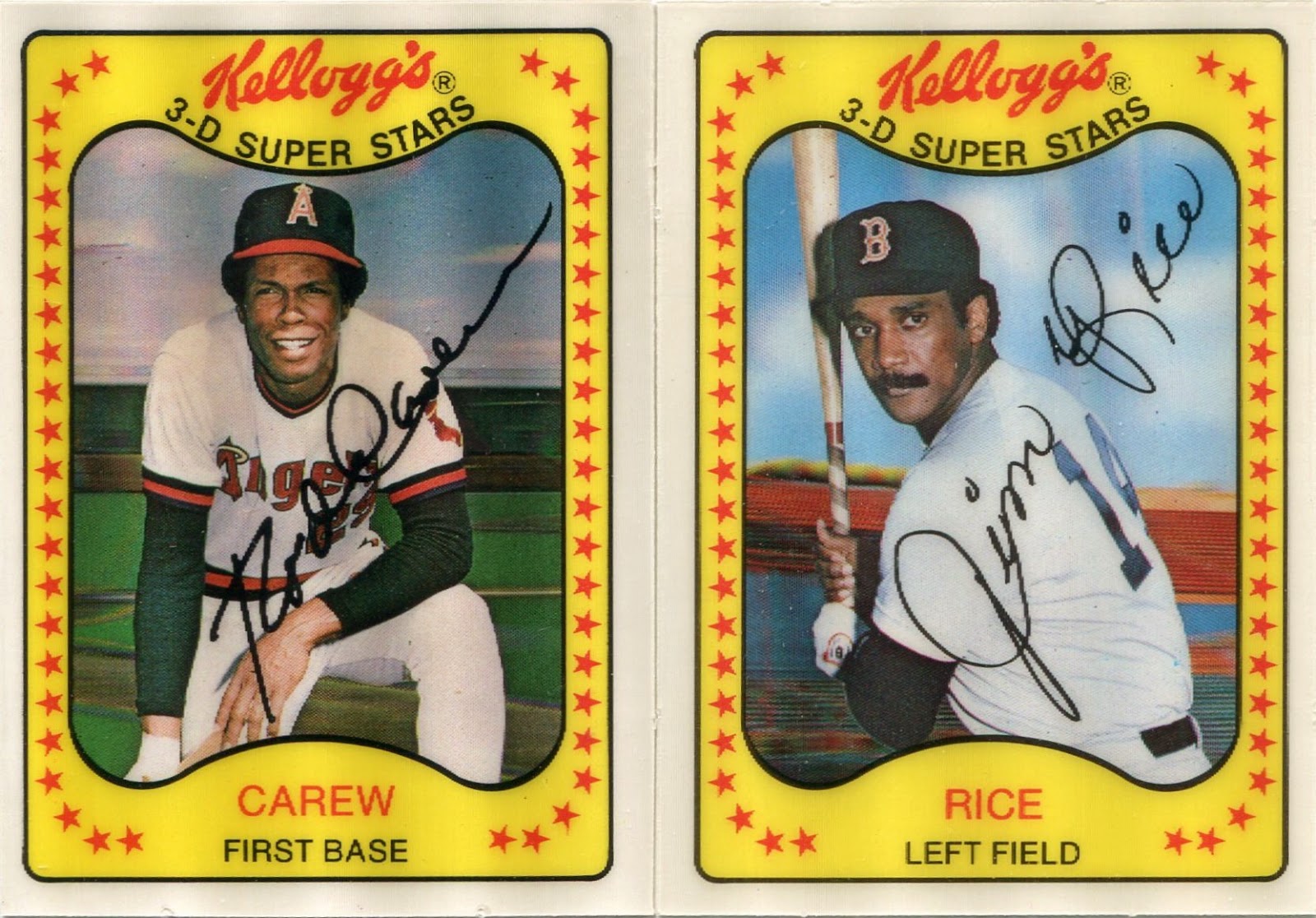 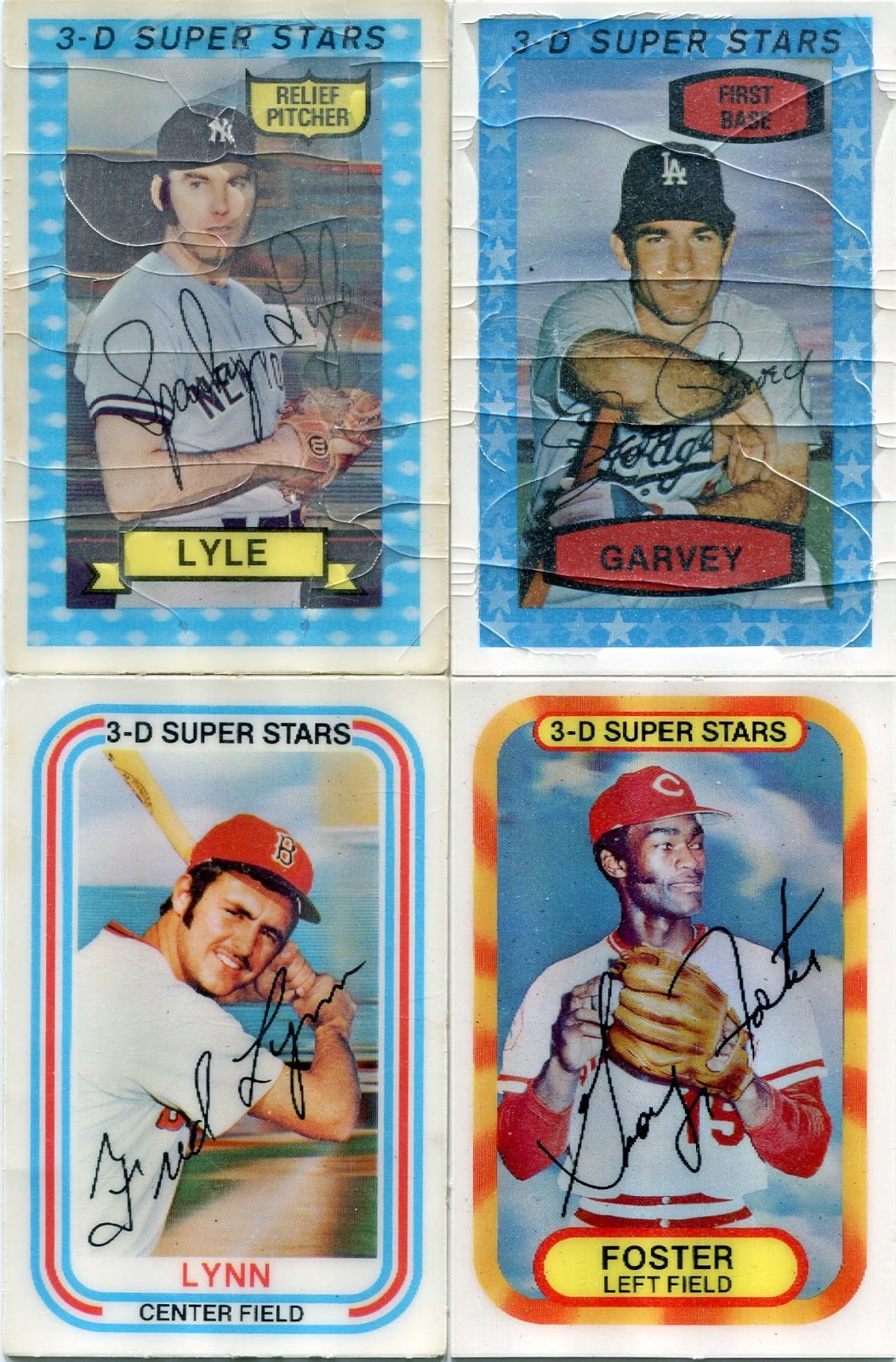 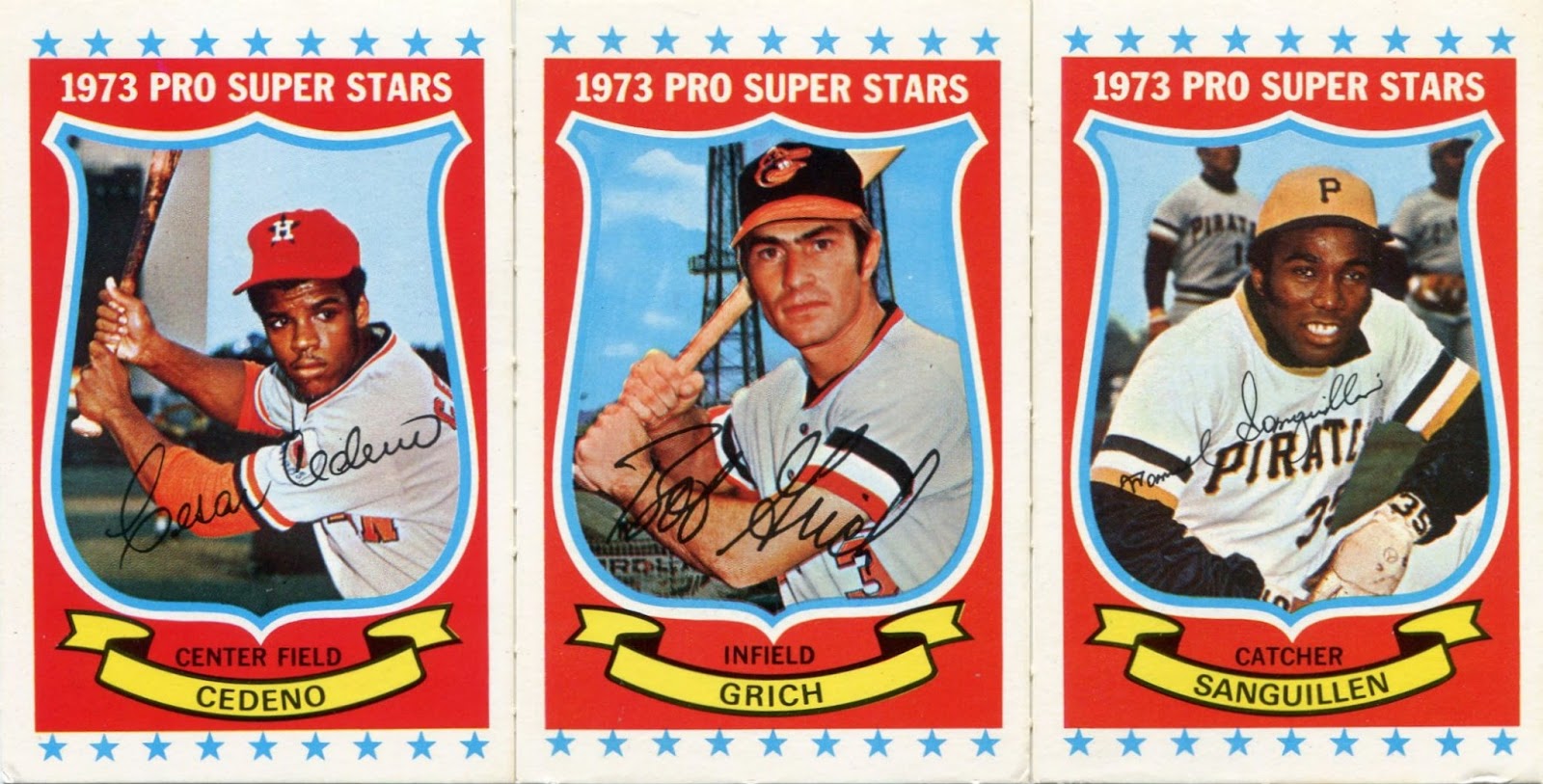 Some cereal should tide me over.

My dad really went all-out on the Kellogg's this year. He managed to pick up at least one card from almost every year of the brand. I'm tempted to rank each design on the blog one of these days, but I don't know if I can do it because I like all of them so darn much.

I've tried to resist saying this until now, but it might be time to finally admit it.

Maybe Kellogg's is better than Hostess. 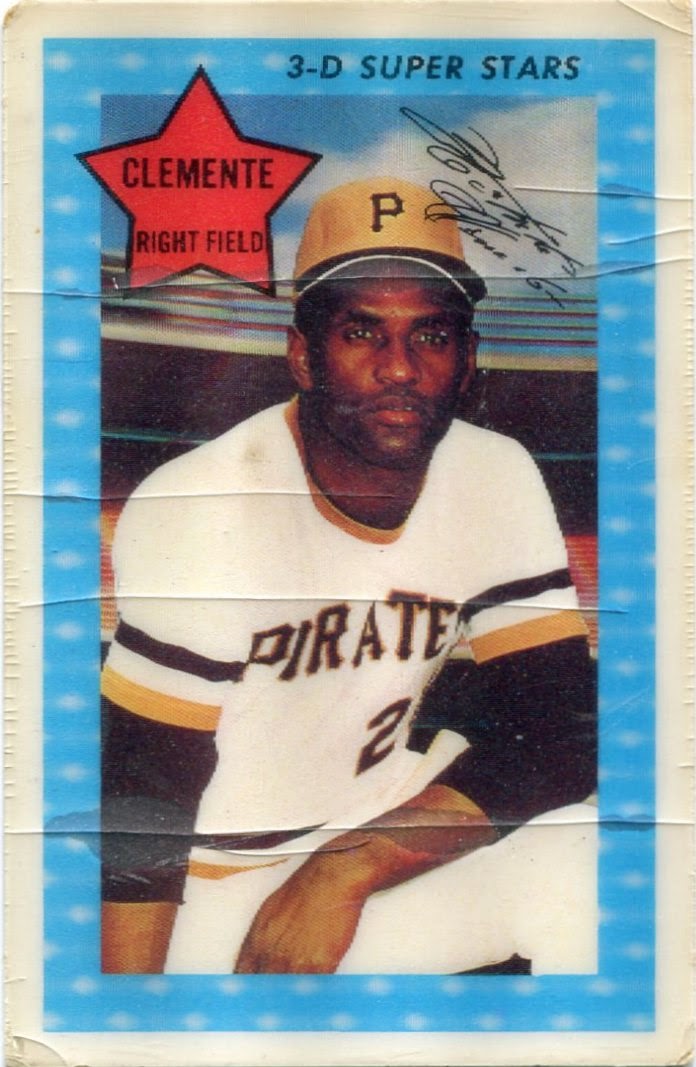 I think so. Roberto here convinced me.

This was the oldest Kellogg's card my dad found for me, and it was by far the best. Up until a few months ago, I never knew that Roberto Clemente appeared in the first few Kellogg's sets. Seeing as how he's my all-time favorite player and all, I knew I had to have one.

I tried my luck on Ebay a few times, but got woefully outbid on every attempt. But, like my failed attempts to find Johnny Bench and Vida Blue, my dad managed to succeed where I never could.

You have no idea how proud I am to say that I own a real Roberto Clemente Kellogg's card.

And, as hard as it might be to believe, this wasn't even the best Christmas gift my dad got for me.

The last card he handed me was wrapped separately from all the others. Since the Clemente was the number one card from the list I'd made, I didn't have a clue what this last present could be.

As they say, there was only one way to find out. 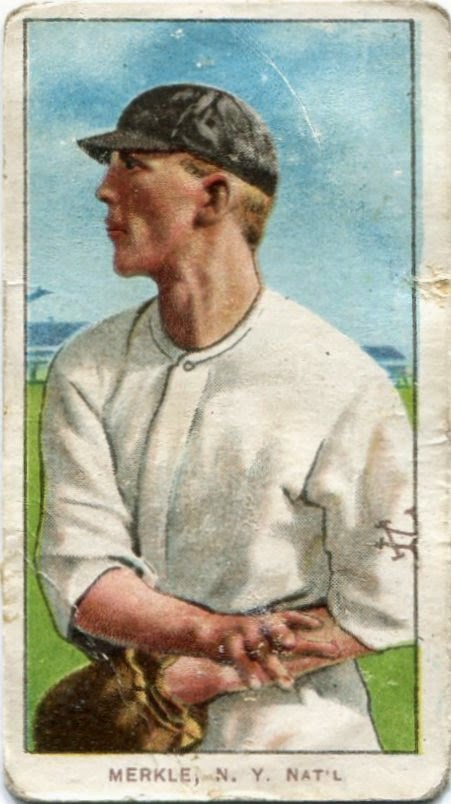 Only then did I find out that I'd been Merkled.

To me, there are few more fascinating figures in baseball history than Fred Merkle. Most fans only know him for failing to touch second base after a vital Cubs-Giants contest in 1908, an infamous boner (hee-hee) that supposedly cost the Giants the pennant that year.

In reality, however, very little of the blame can actually be placed on Merkle. Sadly, that didn't stop the play from haunting him for the rest of his 16-year career. And the rest of his life, for that matter. The blunder was even referenced in the very first sentence of his obituary.

While I've pretty much frothed at the mouth for anything featuring Fred Merkle, I never thought the prospect of owning an actual tobacco card of his would have a chance of ever becoming true.

But, yet again, my dad made another cardboard dream become a reality. The copy my dad bought for me was actually graded, but it didn't take long for me to crack it out of that ugly case.

A card as beautiful as this needs needs to breathe, live, see the world, be held by human hands. I'll get the most out of this amazing Christmas present that way.

I'm not eight years old any more. Christmas isn't about gifts, gifts, and more gifts for me these days. But it sure is nice to know that my dad cares about my collection this much, and would go to such great lengths to improve it.

I keep meaning to post my Hostess cards. I never even thought of cutting mine. Too busy devouring the HoHos.

Glad you liked everything!!

Your dad sure does know your collecting tastes! Merry Christmas, Nick!

Great haul! Glad you had a Merry Christmas.