Happy to be wrong 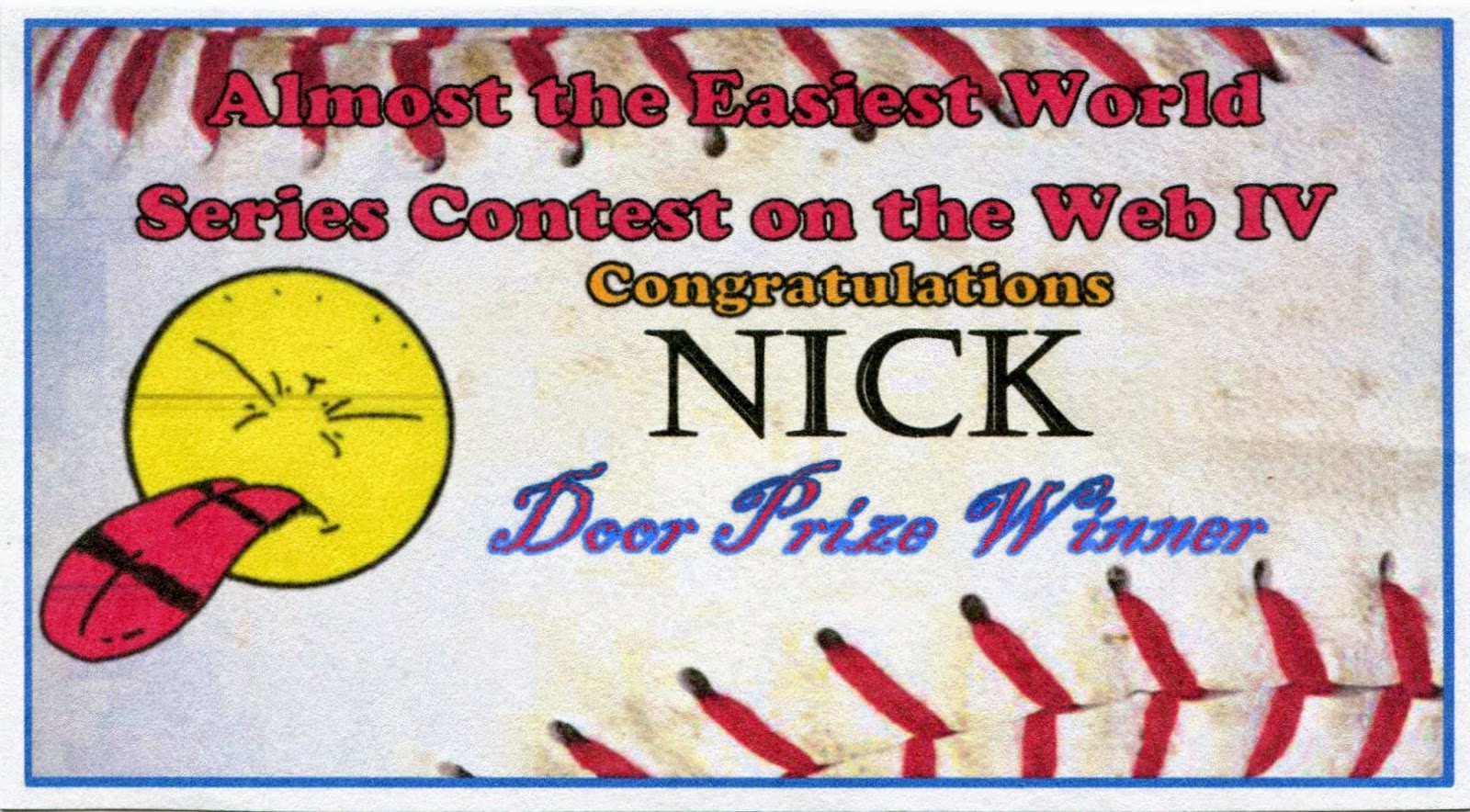 It's not often I get rewarded for being wrong.

If I answer a question incorrectly on a test at college, that's that. No points. No nothing. I don't get praised for the effort. This isn't first grade.

As is the case every year, I was way off with my 2014 World Series predictions. As part of a contest held by Mark of the great "Collector's Crack" blog, I said the A's would defeat the Dodgers in seven games.

The A's didn't get out of the AL Wild Card game, and the Dodgers lost to the Cardinals in the NLDS. I was wrong. Just plain wrong. End of story.

Or so I thought. Unbeknownst to me, Mark threw everyone's names into a randomizer in order to select a second contest winner. Thanks to a bit of randomizer luck, my woeful prediction still managed to win one of the prizes.

So, here tonight, it gives me great pleasure to present the winnings from a contest in which I failed miserably.

I've never been happier to be wrong. 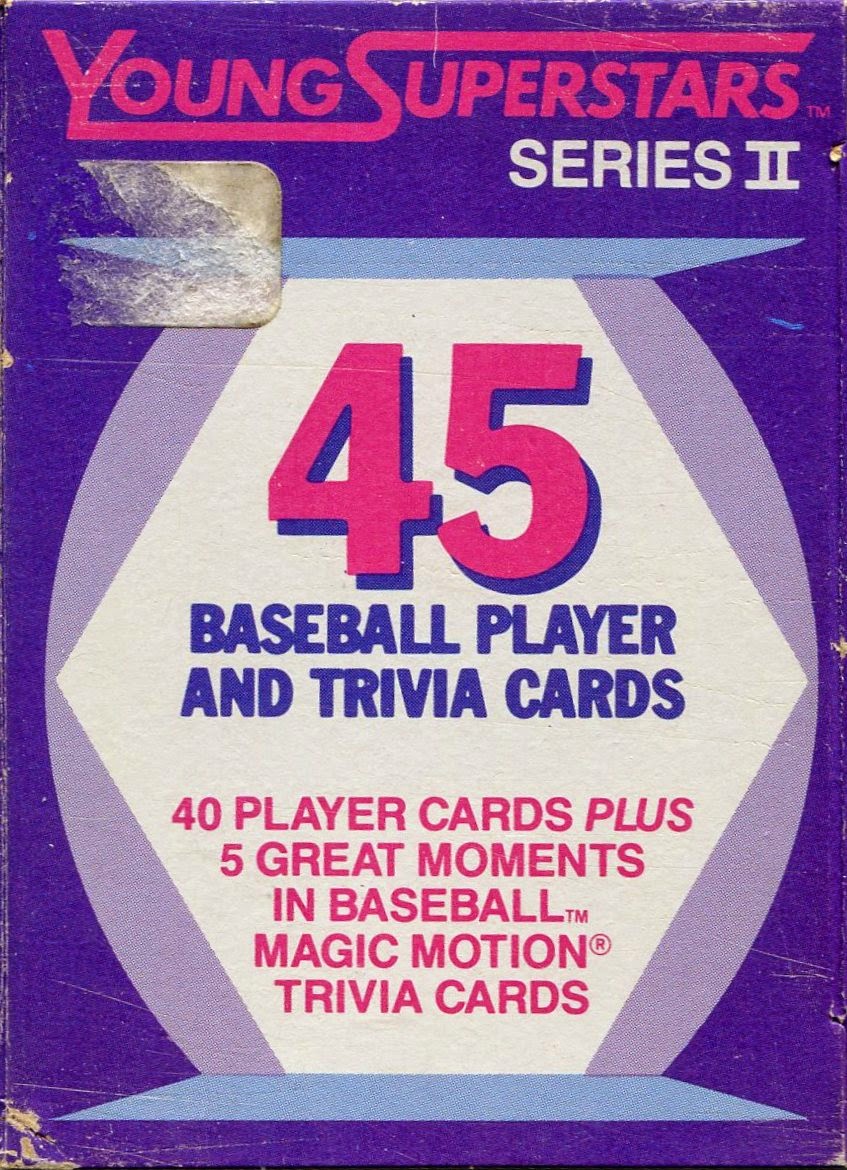 The first thing that fell out of my winnings package from Mark was a couple of little boxed sets.

You can never go wrong sending me oddball sets like these. I love them with a passion and most of them are darn near impossible to find in dime boxes, for whatever reason.

The first box, as you can see, housed a complete 45-card 1988 Score Superstars Series 2 set. 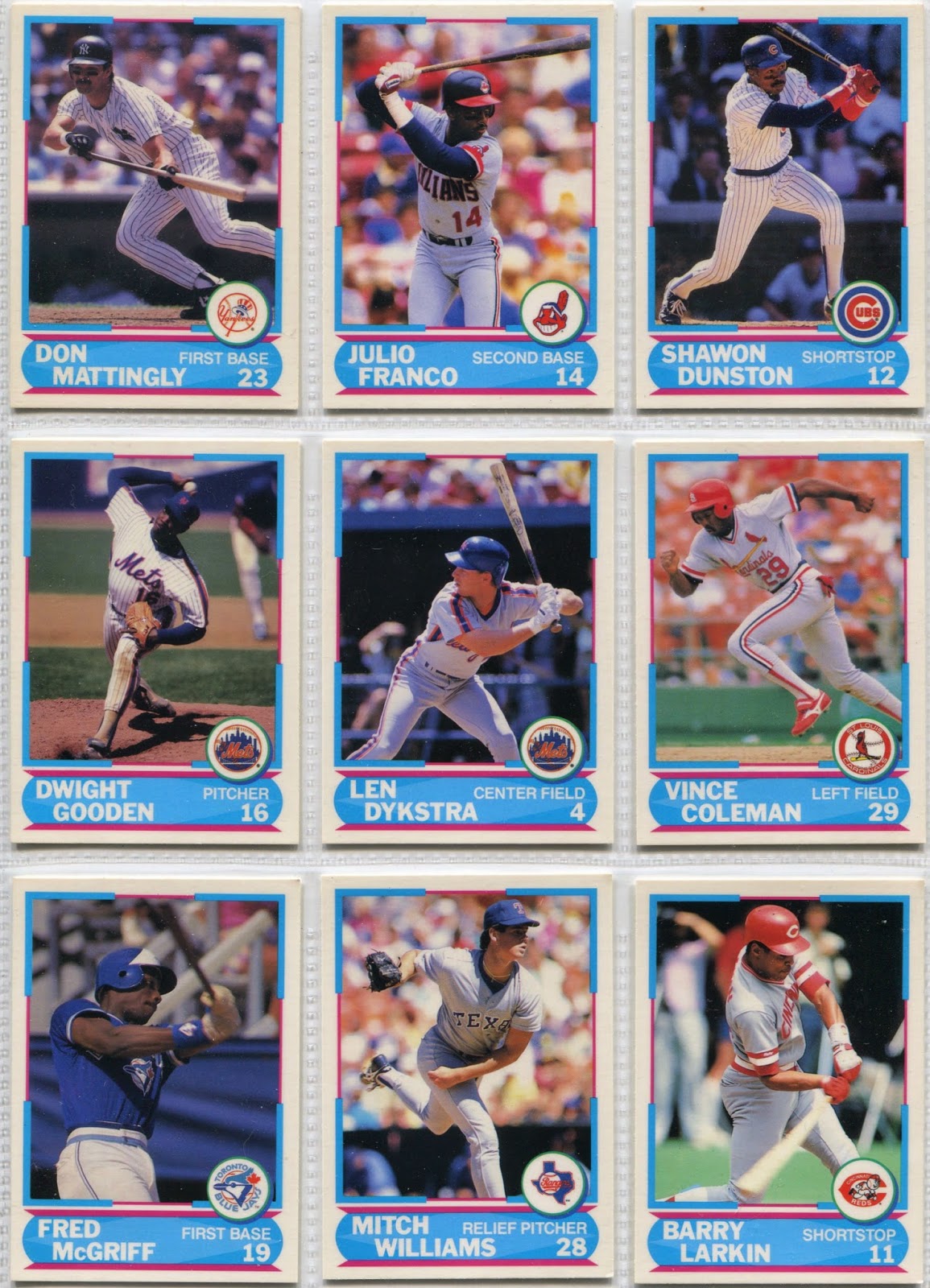 And when Score said Young Superstars, they meant it.

A lot of these rookie-based sets tend to feature guys who end up flaming out in a year or two. But not this one. In this page alone is one Hall of Famer (Larkin), another should-be Hall of Famer (McGriff), and several other guys who enjoyed long and memorable careers.

Still, star-studded rookie sets like these are usually the exception to the rule. 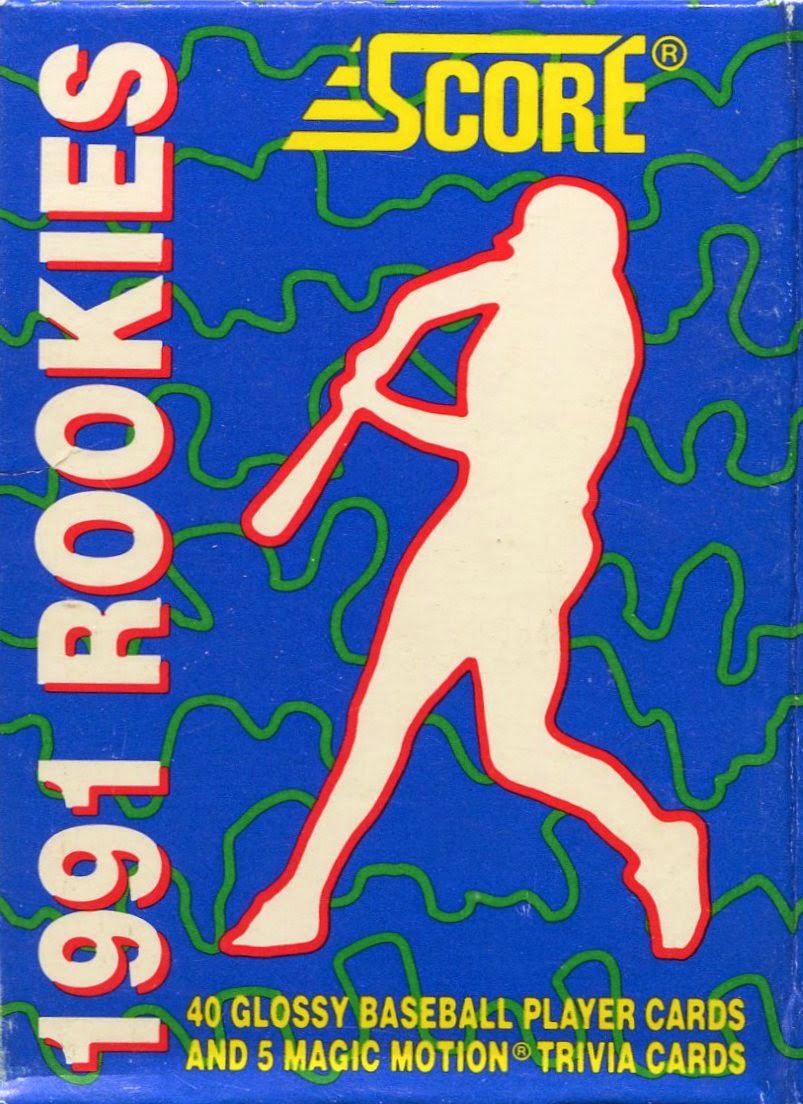 Look no further than the other box set Mark sent for proof.

I've managed to pick up a few singles from the '88 Score set before, but I'd never seen any of these '91 Score rookies prior to this surprising contest win. 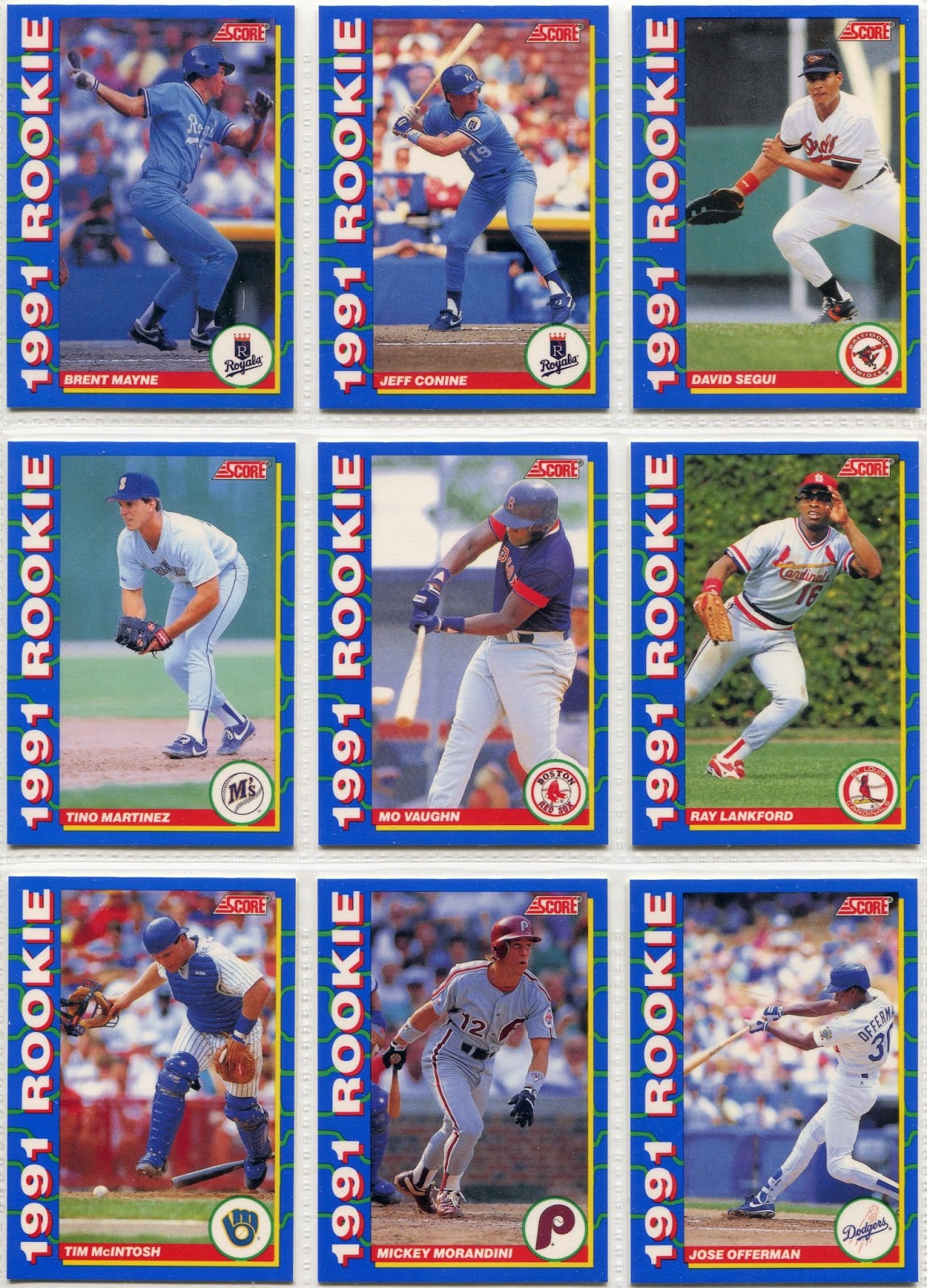 I had to scramble to fill up a page with relatively well-known names. I mean, I had to include Tim McIntosh. Tim McIntosh, for goodness sake. And I only added him because I liked the picture.

Sure, guys like Mo Vaughn and Tino Martinez had nice careers, but there's not much flat-out star power in this set. The design, on the other hand, is neat and about as '90s as it gets. 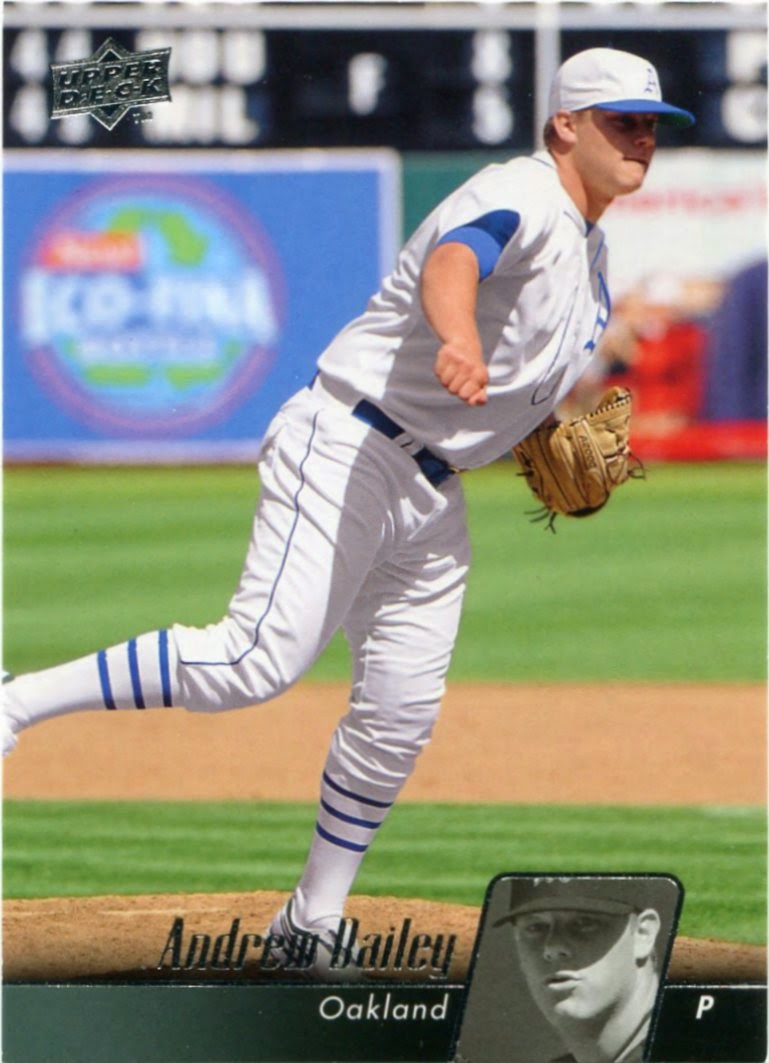 In rounding out my winnings, Mark selected a few hand-picked singles to cater to my wacky collecting tastes.

Here's a nice throwback, courtesy of Andrew Bailey. It seems like every card from the 2010 Upper Deck A's team set features these same retro jerseys.

Even though Oakland failed me with my World Series prediction, I'll still give it a good home. 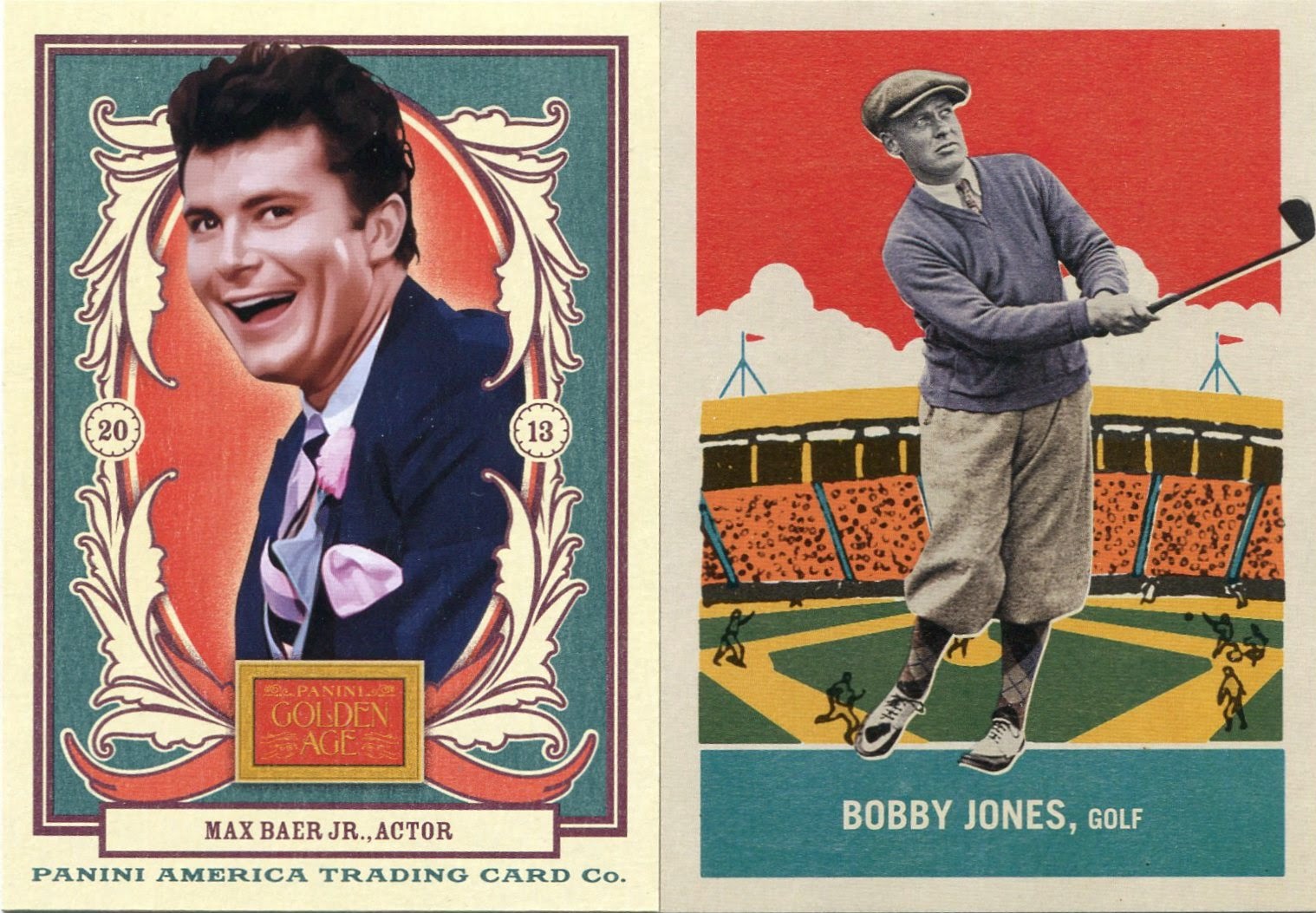 Only Panini can get me genuinely excited about cards of actors and golfers. 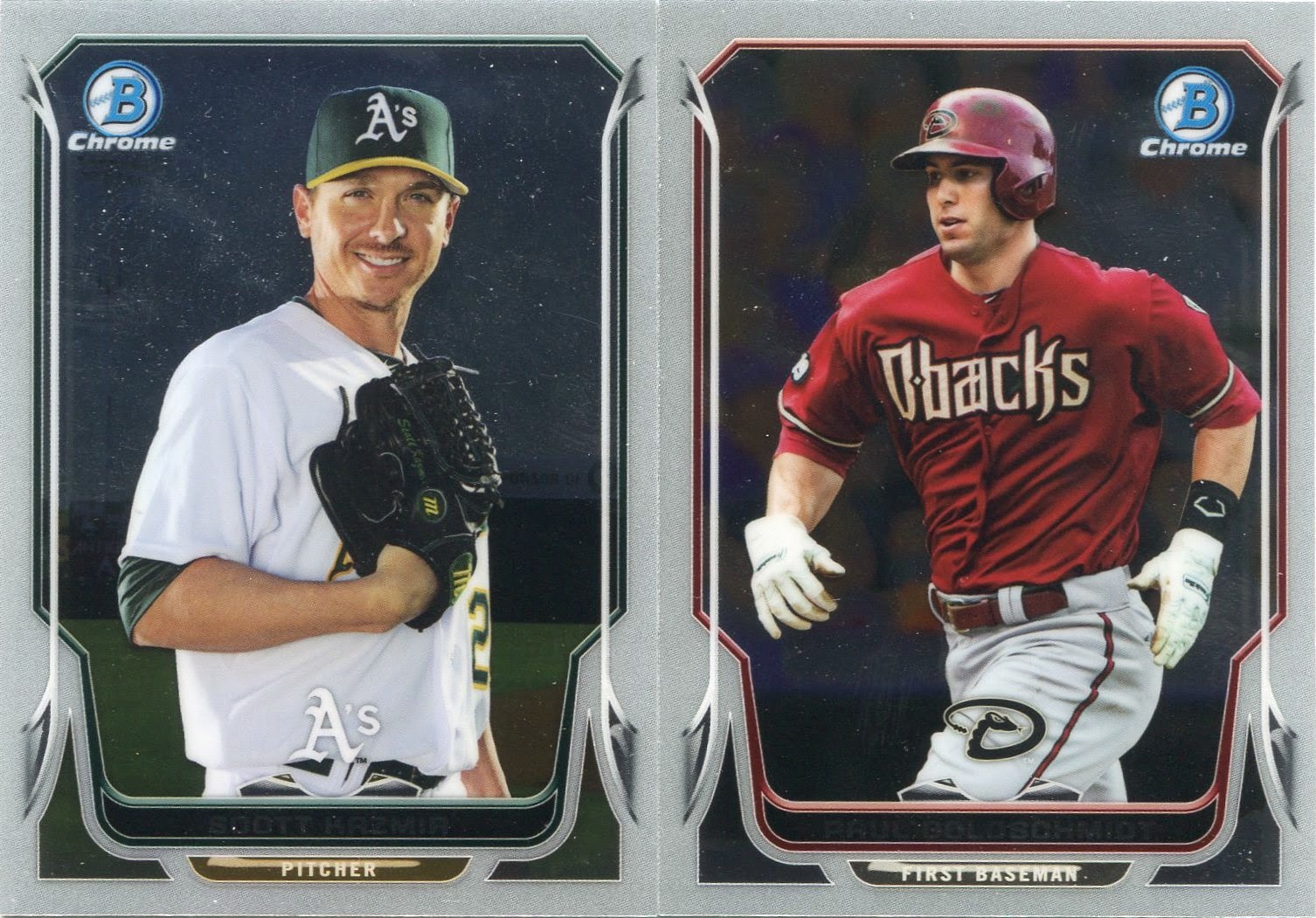 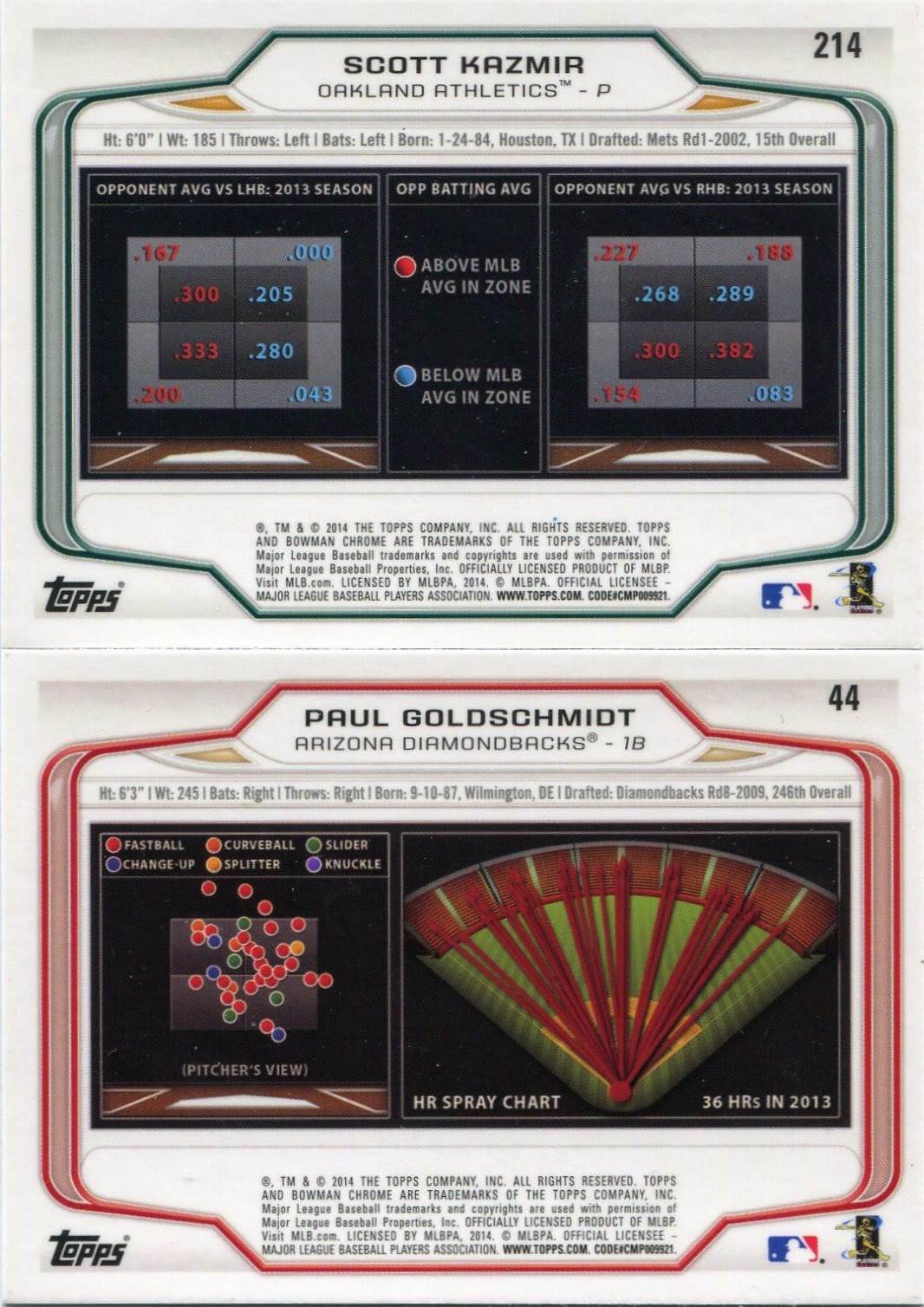 Since this package hit my doorstep just before last month's card show (which should tell you how behind I am with my trade posts), these ended up being my first look at this year's Bowman Chrome.

Kudos to Topps for finally jumping onto the sabermetric bandwagon. 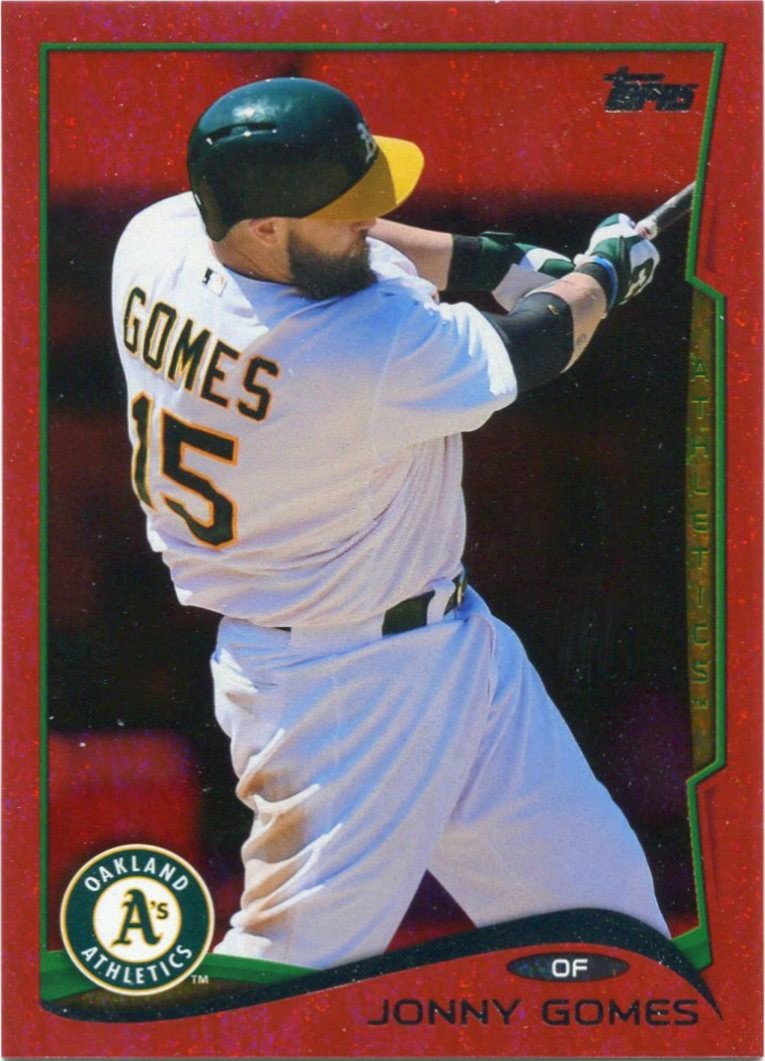 My winnings closed out with a handful of coveted Update needs.

The fun kicked off with this Jonny Gomes blood rain parallel. The firey outfielder enjoyed his second tour of duty with Oakland during the latter half of 2014.

I'm sure it was just a coincidence, but there sure were a lot of A's in this package. 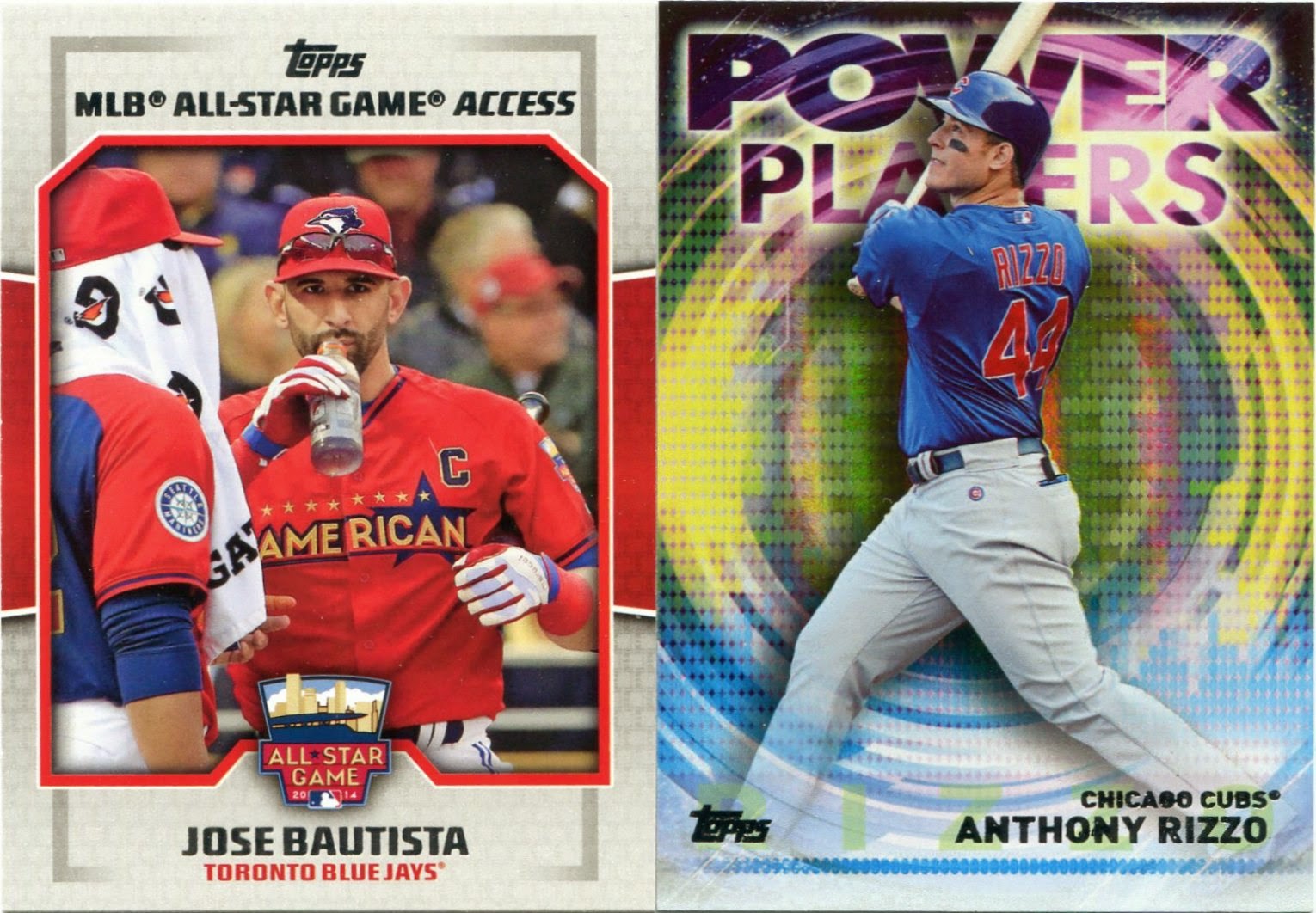 Most of Update's inserts were yawners, but that doesn't mean I won't chase the ones I need for my many player collections.

I'm convinced Gatorade has a hand in Topps's pocket after seeing that Bautista card.

There's some serious subliminal advertising going on there. 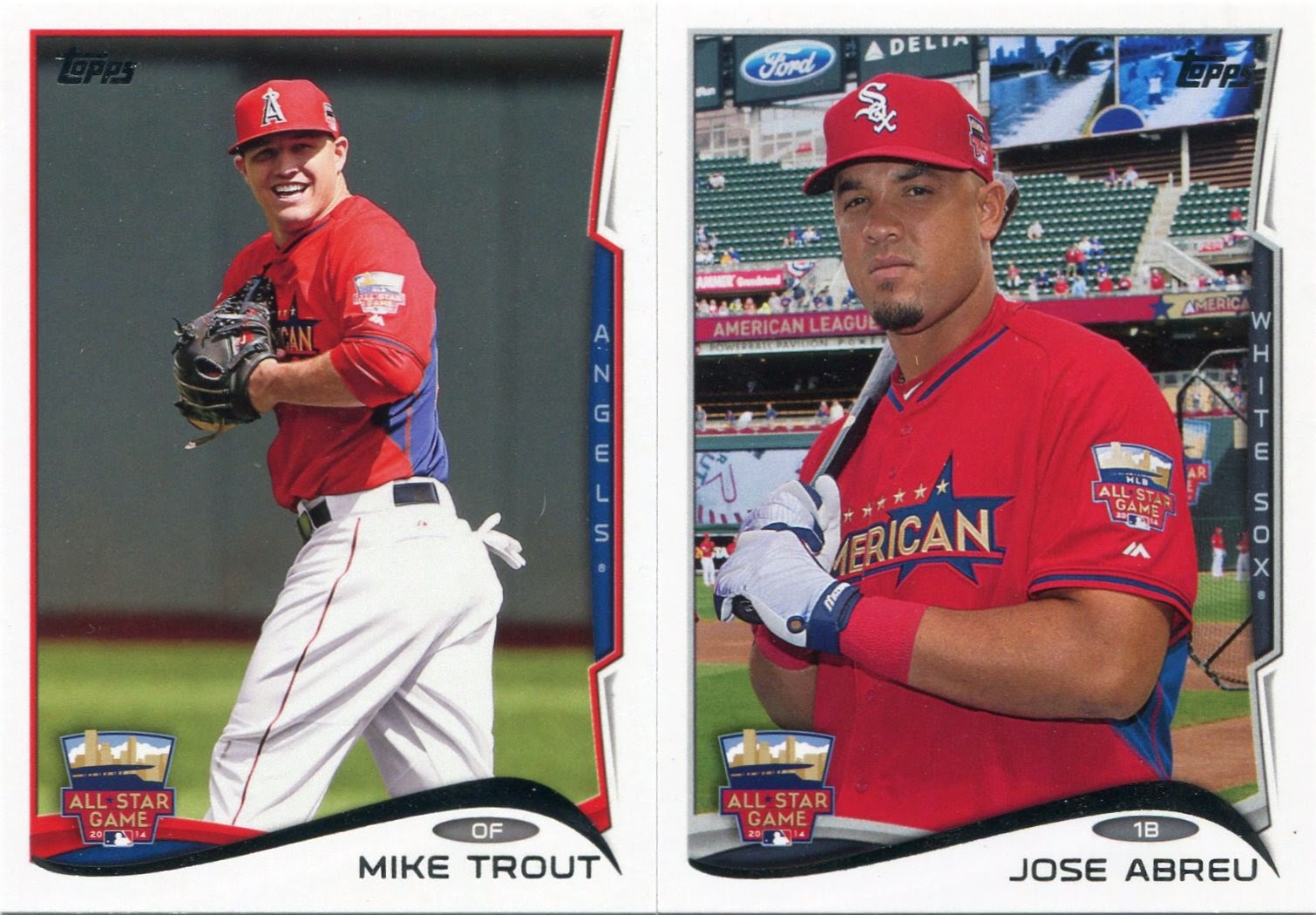 I managed to close out most of my Update base needs with a recent Just Commons order, but most of the big stars were priced a little too high for my liking.

Thankfully, Mark was there to pick up the slack with the Trouts and Abreus of the baseball world. No superstar price tags necessary.

Most of Update's All-Star cards have a tendency to be a bit boring, but I rather enjoy that Abreu.

A pose like that harkens back to the good ol' days of '70s Topps. 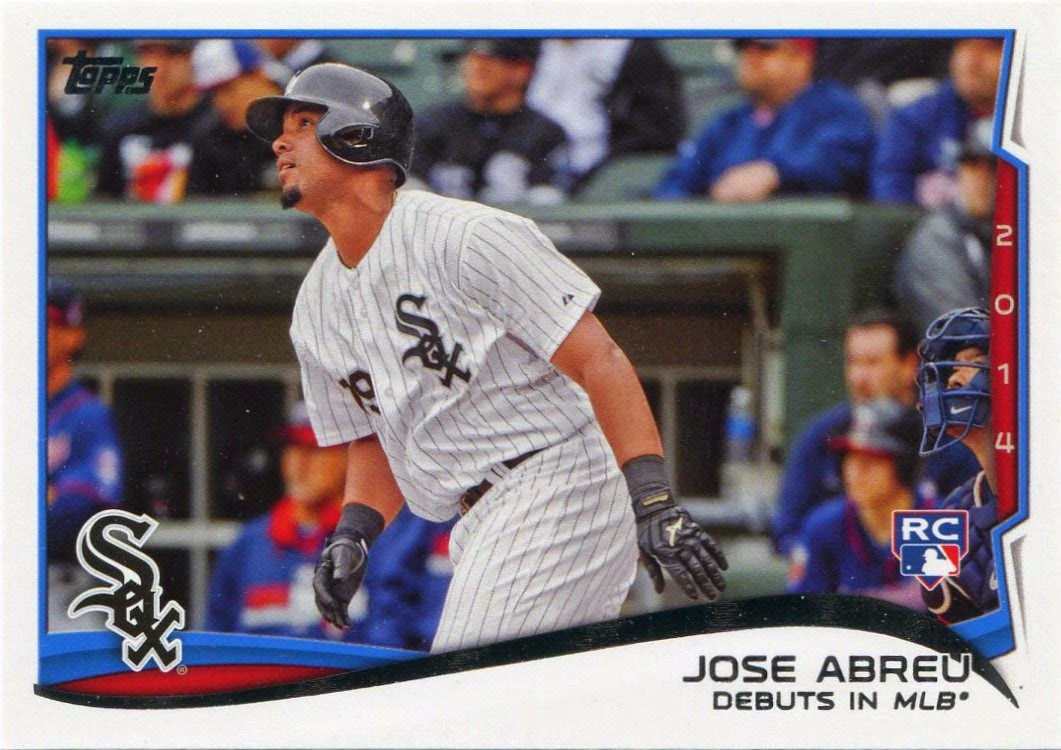 Looking back, I got a couple great boxed sets, some Golden Age, two new Jose Abreu cards, and a whole lot more out of my winnings.

All because I incorrectly picked the A's to win the World Series.

Until Mark came along, I had no idea how good it could feel to be wrong.

I'll have to show my teachers this post the next time they mark me down on an exam.
Posted by Nick at 6:15 PM

It just goes to show you it pays to play! I figured you'd enjoy all those and I tried to help as much as I could with your want lists. Oh and Super Bowl contest starts next week!

How could you NOT be excited by a card of JETHRO!!?

I'm with Mr. Hoyle... that Jones card is cool. Gonna see if there are any floating on COMC. Congratulations on your winnings.