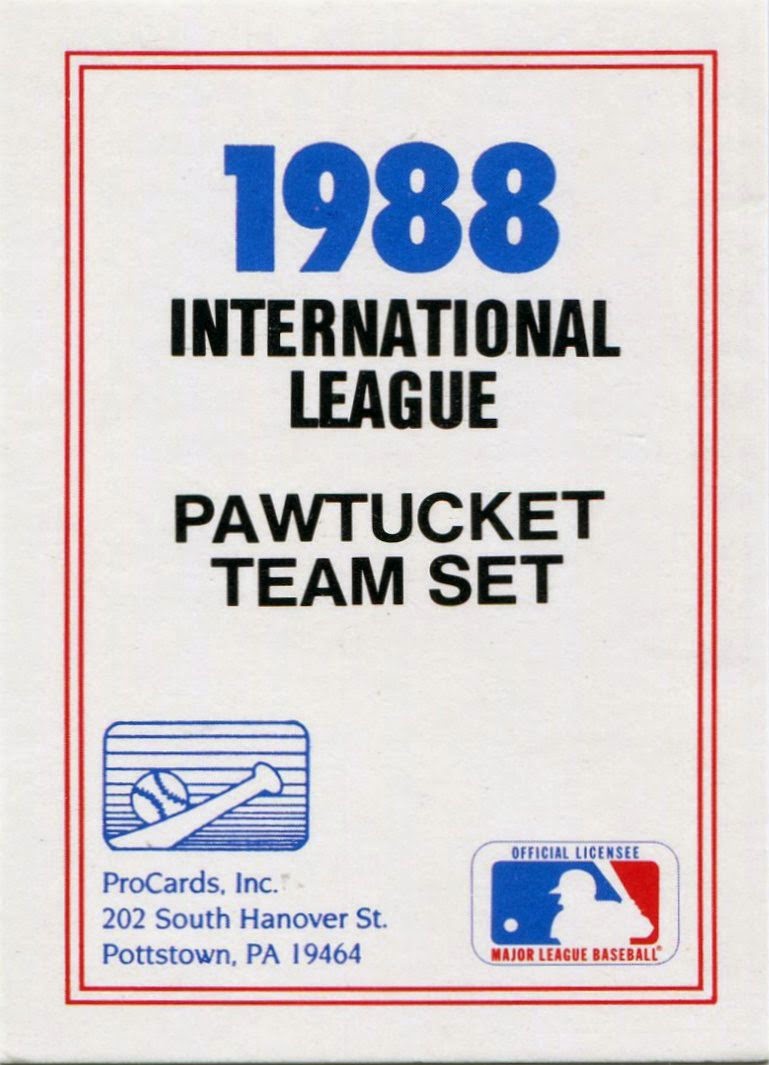 I've never been much of a set builder.

When I go to card shows, it seems like everyone except me has a list in hand, hunting for those last few cards to complete a set they've been working on for years. I breeze right past them.

That's not to say that I don't see the benefits of that type of collecting, because I do. I think a lot of my apathy is thanks to growing up during the late '90s and 2000s, a period which wasn't exactly conducive to set building with ten million different products on the shelf and all.

Completing a whole set seemed impossible at the time.

Still, if someone wants to force the whole set building thing on me, I guess I can't refuse. How does one do that, you ask? That's easy. By sending me the whole set in one fell swoop.

That's what Matt of the awesome blog "Bob Walk the Plank" recently did. Three different complete oddball sets fell out of a package I found sitting on my doorstep a few weeks back. Between these and the 1987 Topps rack pack Matt sent me the last time, he's quickly becoming a random All-Star around here.

The first batch, as you can see, was a 1988 Pawtucket Red Sox team set. 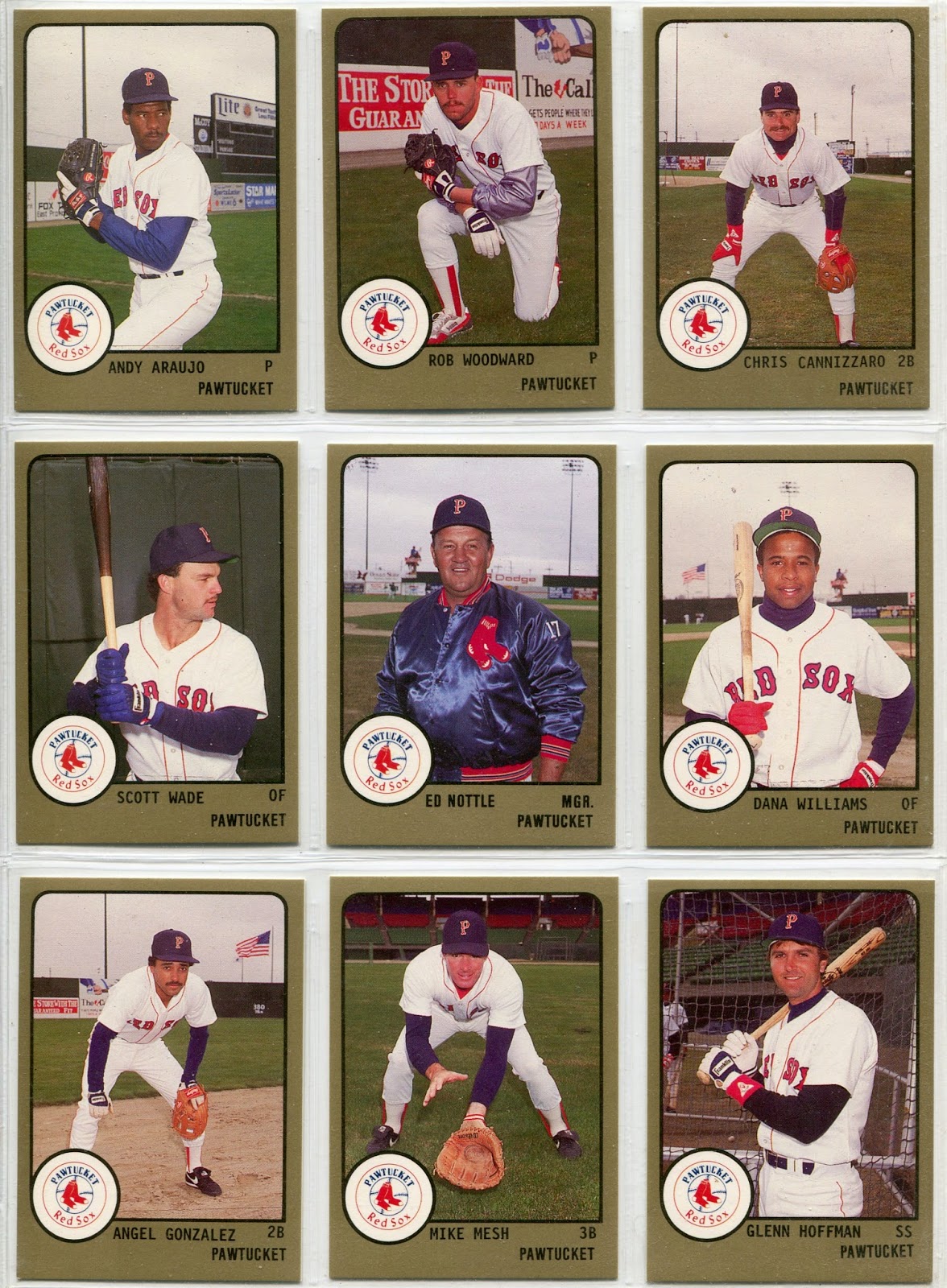 I'm guessing thousands and thousands of these cards were produced in the '80s, and I love every last one of them.

There's a certain muted greatness in a lot of minor league photos. These aren't the guys making the big bucks. These are the guys hanging on for pure love of the game. And about 99 percent of them will never reach stardom in the big leagues.

Plus, I've found that a lot of minor league sets feature cards of various team personnel that don't show up in most mainstream checklists. 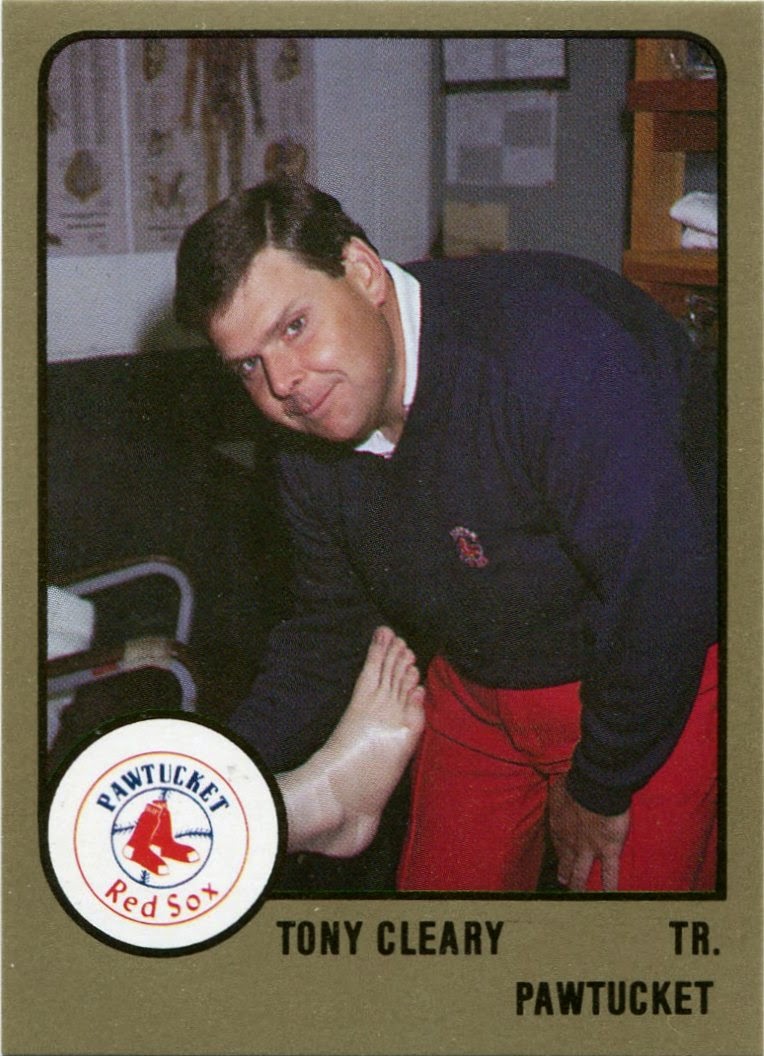 Why? Why did these people feel the need to feature a mortician on a baseball card? What possible reason could they...

He's the trainer. That's a whole person lying on the training table there, not just a dismembered foot. And that's an anatomy poster behind him, not some kind of step-by-step embalming process.

Although that still doesn't explain the creepy grin on that guy's face.

Maybe it'd be best for everyone involved if trainers didn't get baseball cards. 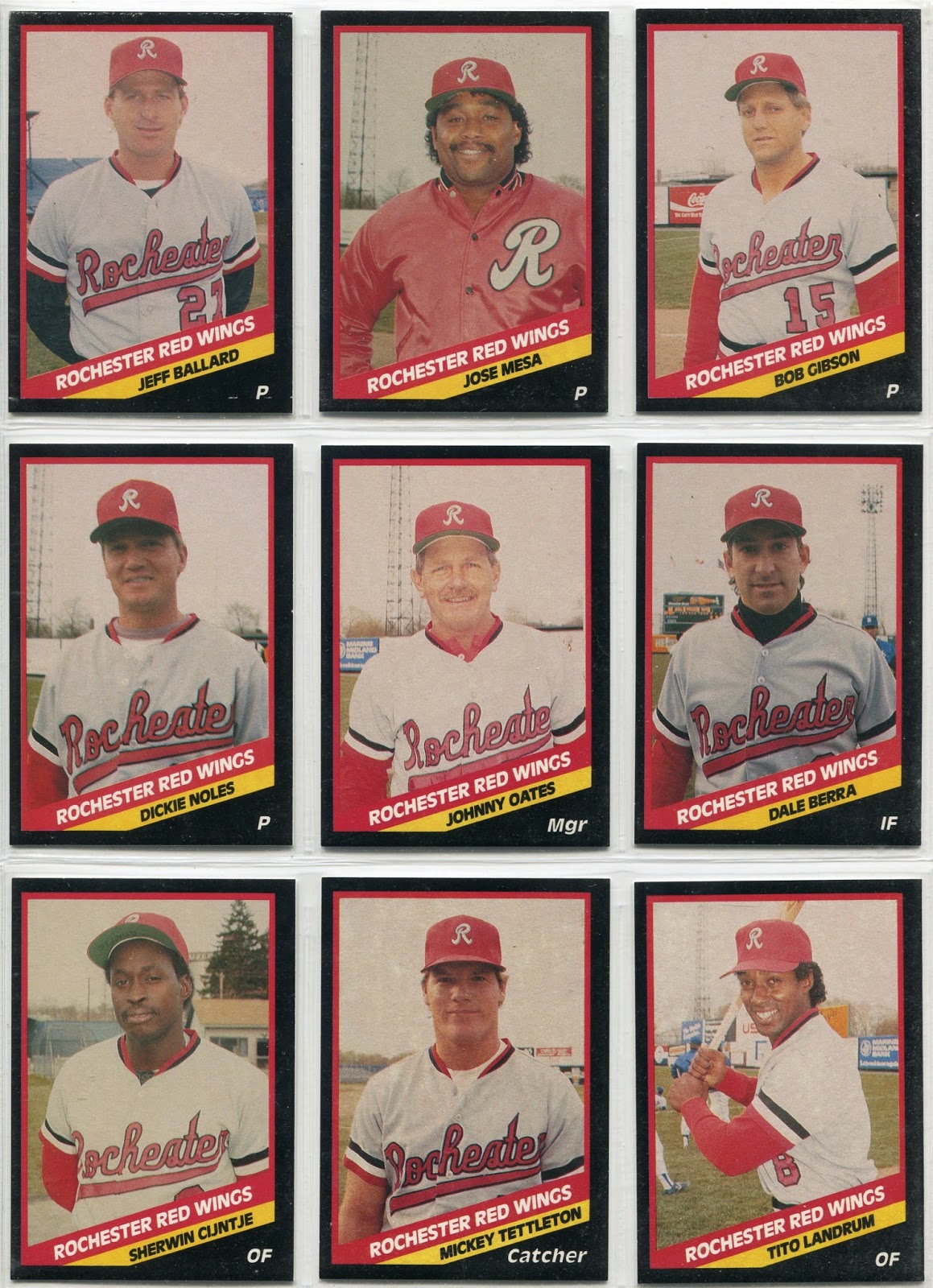 The second set Matt sent over was a 1988 Rochester Red Wings checklist, a team that was an affiliate of the Orioles at the time.

This page here is a great example of another reason I enjoy minor league sets so much. For better or worse, you get to see both ends of the inevitable career arc of a baseball player.

Most guys you'll find in minor league sets are bright-eyed rookies, still hungry for that first shot in the bigs. A select few, like Jose Mesa and Jeff Ballard, would wind up enjoying some relative success in the show.

On the other end of the coin, however, you have the Dale Berras and Dickie Noleses of the baseball world. Guys fast approaching 30 who are desperate for one last shot at the big time.

Some, like Berra, would never get that chance. Others, like Noles (who would only appear in one more big league game after 1988), went on to earn that payoff, however briefly it might have been.

As is the tale of any minor league set. 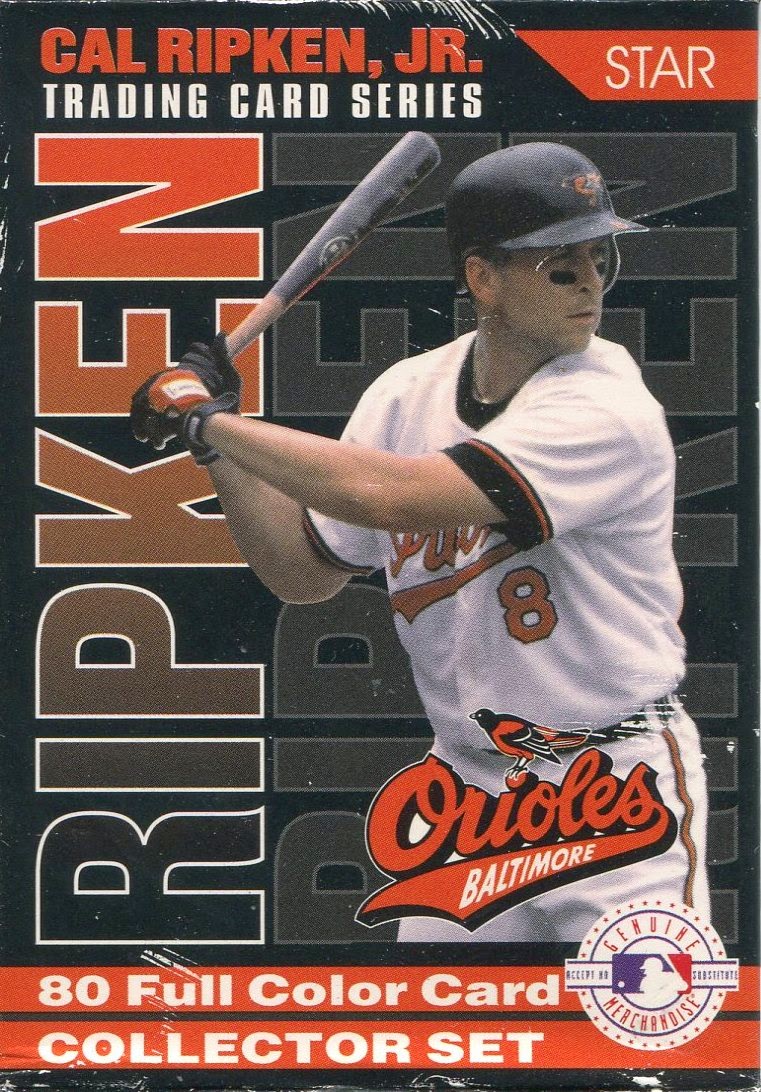 Still, I think my favorite piece from Matt's trade package was this All Call, All the Time oddball offering.

In what I'm guessing was an attempt to capitalize on the Iron Man's record-breaking 2,131st consecutive game played, Star released this 80-card Ripken set in 1995. 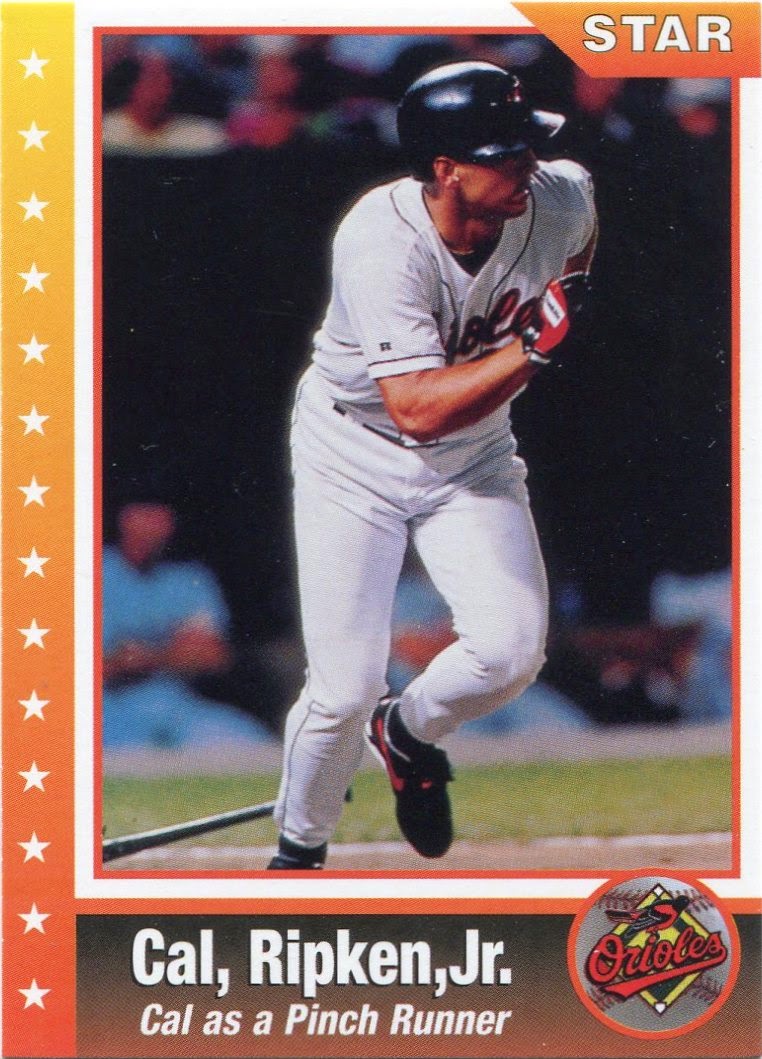 Thanks to the Pacific Nolan Ryan and Tom Seaver sets of the early '90s, I've learned that there are ups and downs to sets centered around one player.

As great as Ripken might be, it is redundant to feature the same guy 80 different times. That said, this set nearly doubled my Cal collection in the drop of a hat. (Yes, I took them out of the box and put them all into my Orioles binder.)

Plus, for better or worse, you'll learn everything you ever wanted to know about guys like Ripken. Stupid little tidbits that seem pointless without baseball cards.

Hey, did you know that Cal has pinch-run on exactly seven occasions during his career? And that the last time was on April 18th, 1982, when he ran for Terry Crowley? 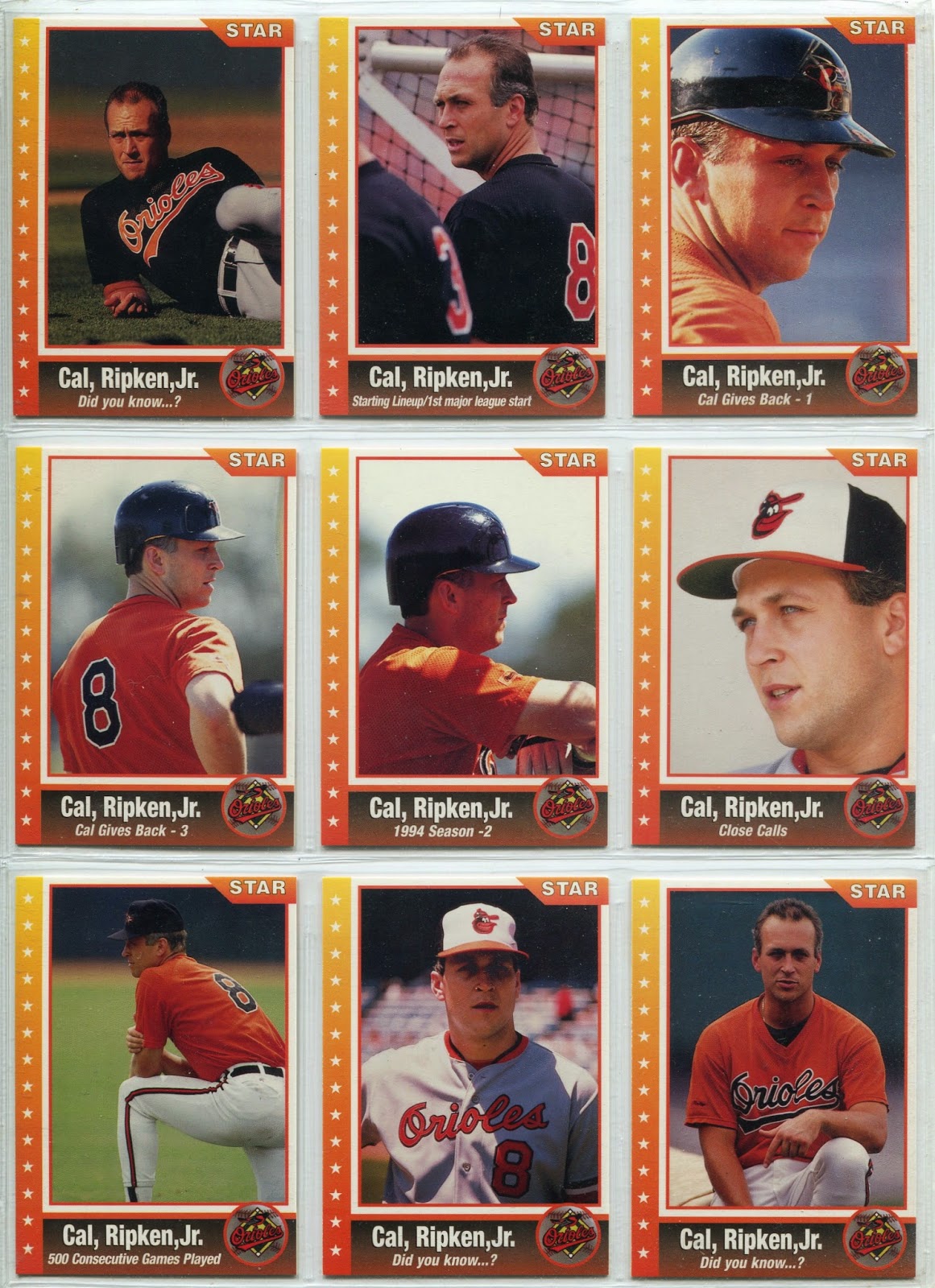 Of course, one of the downs is the fact that not all 80 cards are going to be masterpieces.

There's a good helping of boring extreme close-ups and odd profile shots scattered around this checklist.

And, unless you want to see the progression of Cal's male pattern baldness, they're not particularly exciting. 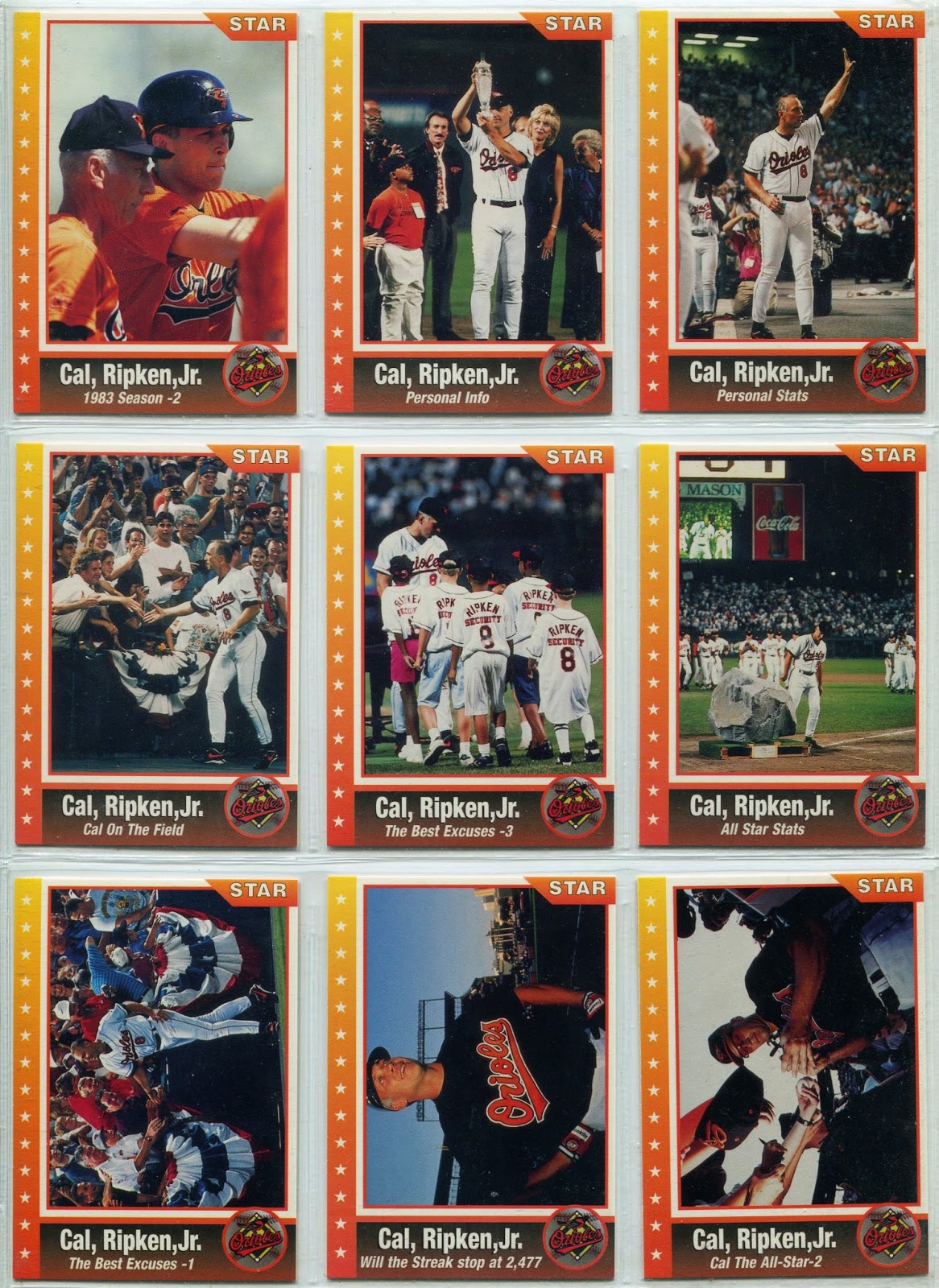 At the same time, however, sets like these usually feature a slew of awesome shots that you won't find anywhere else.

Ripken flanking a giant rock, for some reason. 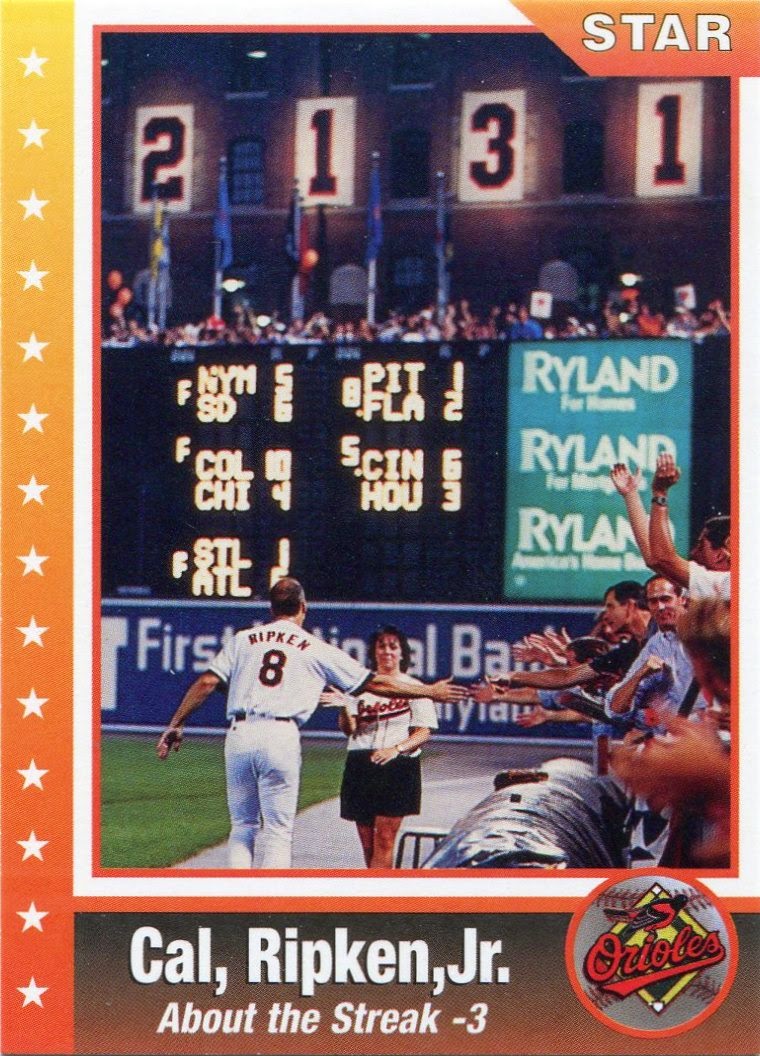 Even the ball girl wants a high-five from Cal.

This might be the single greatest card I've seen honoring the immortal game #2,131. I was only three at the time, so I don't have any memories of the famous moment.

Still, after seeing this card, I feel like I was actually in the crowd that night.

Good luck finding anything else like it in a Topps or Upper Deck set.

Granted, I don't see myself becoming a set builder anytime soon. I love the way I collect far too much to ever give it up.

But if any of you have sets like these lying around in the basement, they satisfy both the dominantly random guy and the tiny bit of set builder in me. Just don't start sending me your 1989 Fleer.

Even set builders are sick of those.
Posted by Nick at 4:01 PM

I think I still have a few more random things for you. /puts 89 fleer in bubble mailer for Nick.

Epic Red Wings set!They are from my hometown and are currently affiliated with the Twinsies.As a kid,we're talking late 80's ,I remember Mesa and Chris Hoiles coming to a card show and signing pics for the kids.Good times ;)