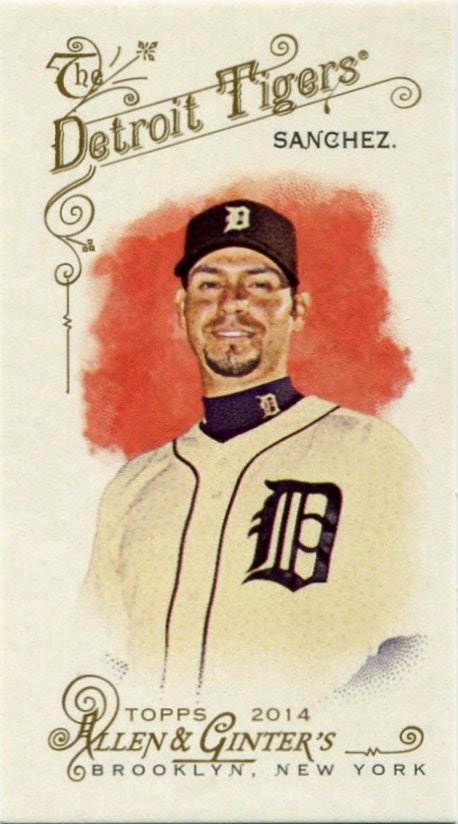 It's never too late to think about the future.

I don't know about you, but I'm already anticipating the 2015 card season. Sadly, it seems a long ways away when it's 20 degrees outside.

At this point, I pretty much know what to expect out of the base brands. Topps Flagship is always fun, and the terrific 2015 design is even good for a little bonus excitement. On the other end of things, I've come to understand that Gypsy Queen and Archives aren't going to floor me, save for some kind of cardboard miracle.

Still, one product that has me downright confused is A&G. I thought the brand's 2011, 2012, and 2013 offerings were busts. But then Topps went out and got my hopes back up with a gem of a design this year.

Was 2014 A&G merely a flash in the pan? Or is A&G back for good? I don't have an answer for either of those questions yet, but, thanks to a fantastic package from reader Michael G., I can at least try to figure out what Topps needs to keep or throw away in order to make 2015 A&G another success.

One thing's for sure. Keep the minis.

For the love of God, Topps, never get rid of the minis. 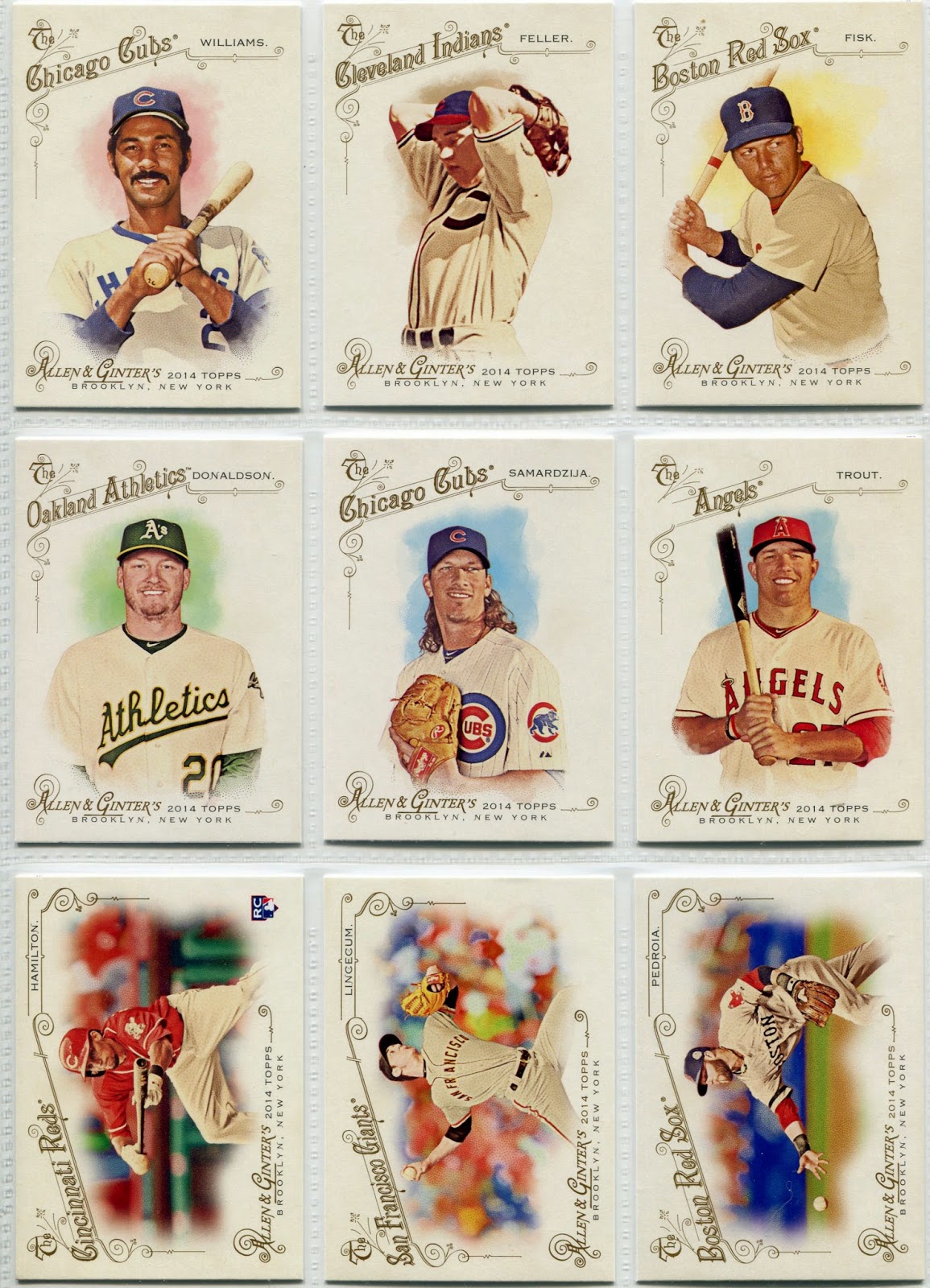 Michael helped out a ton with my 2014 A&G base and short-print needs.

Most people seemed to like the 2014 design, myself included. To my knowledge, Topps hasn't released a preview image of 2015 A&G yet, but I hope it's something along the lines of this year's look.

I can't put my finger on exactly what it is, but these have the old-time fancy feel of authentic tobacco cards. A feel that was lacking in the past few years of A&G.

I still don't think the horizontals look all that great on the design, but that's really a small complaint for what was a solid effort all around. 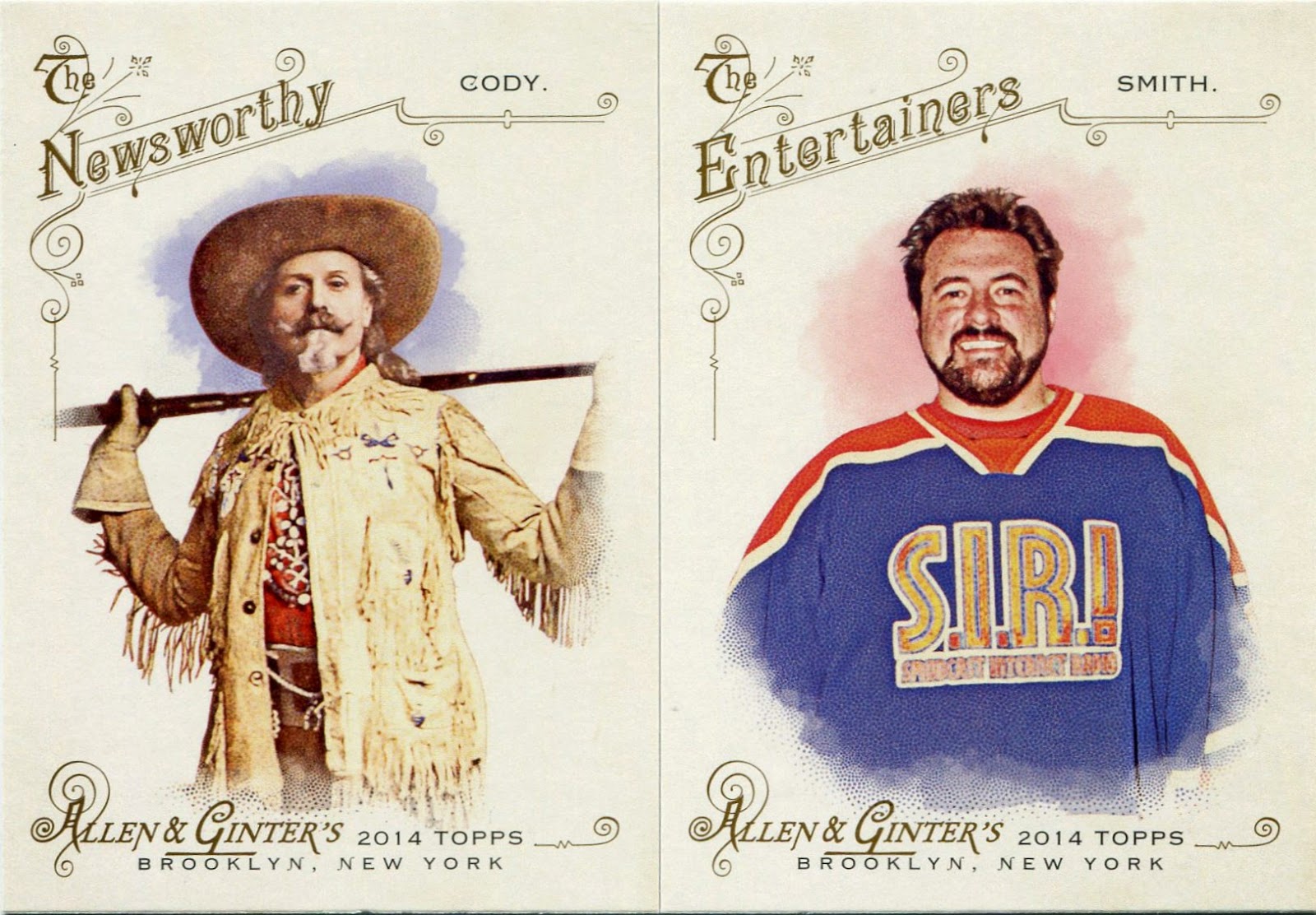 One reason I think I've been down on A&G for a while is the lack of interesting non-sports figures.

I can get loads of Josh Donaldsons and Mike Trouts from a lot of other sources, but only A&G can provide cards of the Pac-Man guy and Beethoven. Those are the kind of things I want. Not figure skaters and college football coaches, as A&G has been so eager to feature lately.

This year's selection wasn't perfect (I don't need cards of bro-tastic bloggers, Topps), but it was certainly an improvement over what we've seen in recent history. Please, Topps, give us more historical figures and film directors.

Maybe I'll try and track down 37 copies of that Kevin Smith card. 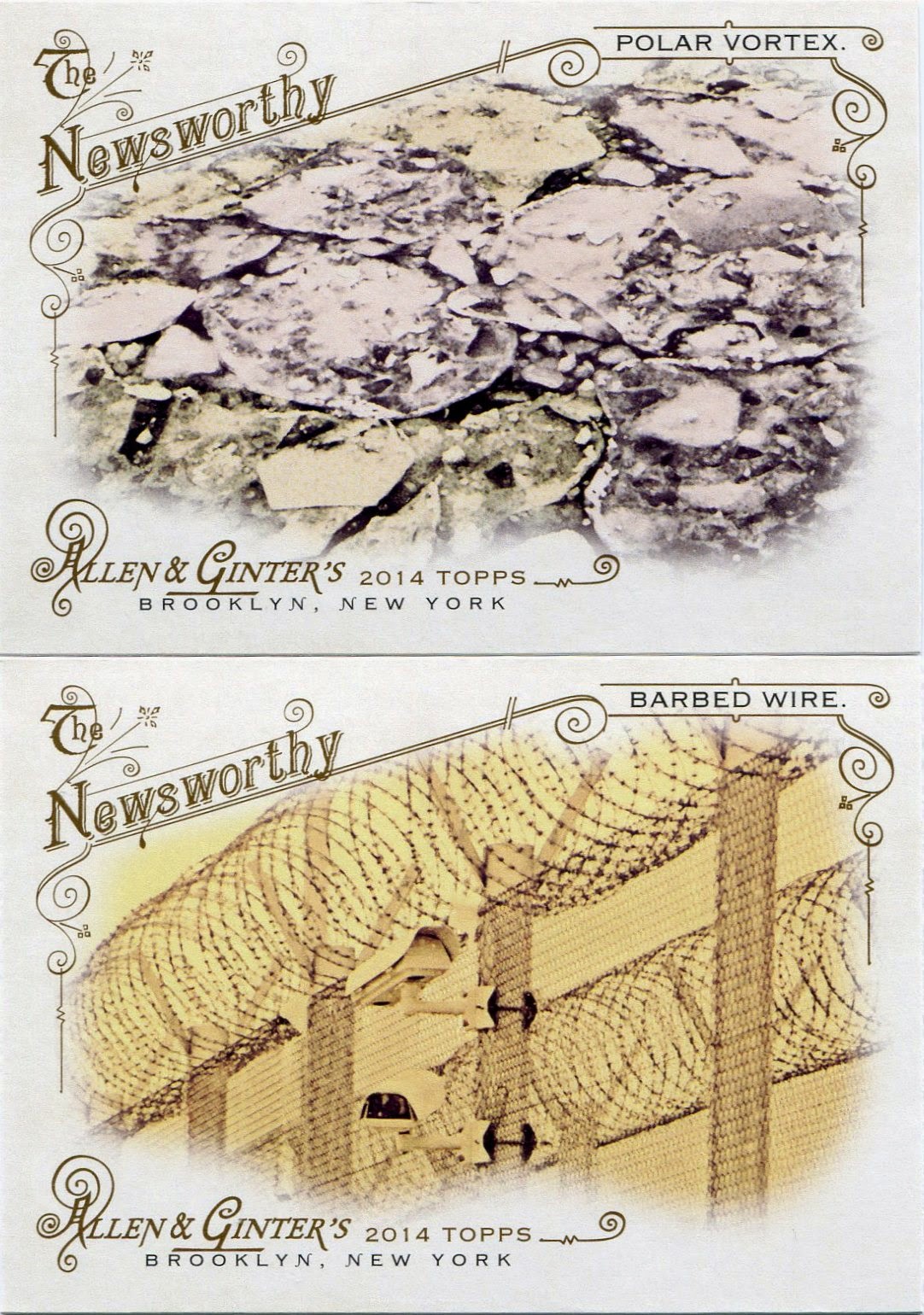 One more thing about the base cards, Topps.

I can't stress this enough.

Cards of Pluto and revolving doors are still some of my personal favorites from A&G's long history. Topps has virtually ignored inanimate objects in recent years.

While cool, these polar vortex and barbed wire singles were relegated to the short-print section of 2014 A&G. (Okay, so the polar vortex isn't actually an object, but you get my drift.) 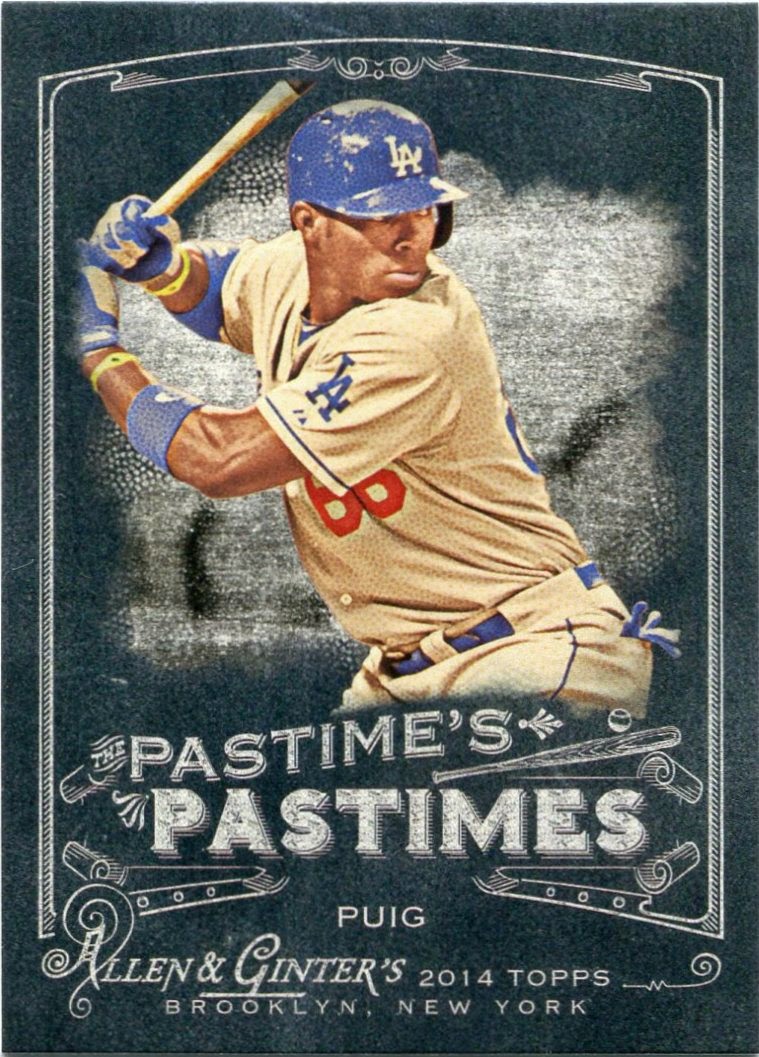 Now let's get on to the inserts.

Michael sent over a decent-sized stack of these "Pastime's Pastimes" singles, but I still somehow need a lot more. You know why?

Because it's a 100-card insert set. I'll probably never get all the ones I want. I don't see a real need for these monstrous insert checklists, and I can't for the life of me understand why Topps thinks they're a good idea.

This design is nice, sure, but it kind of loses its flavor when I realize there's a hundred different ones out there. 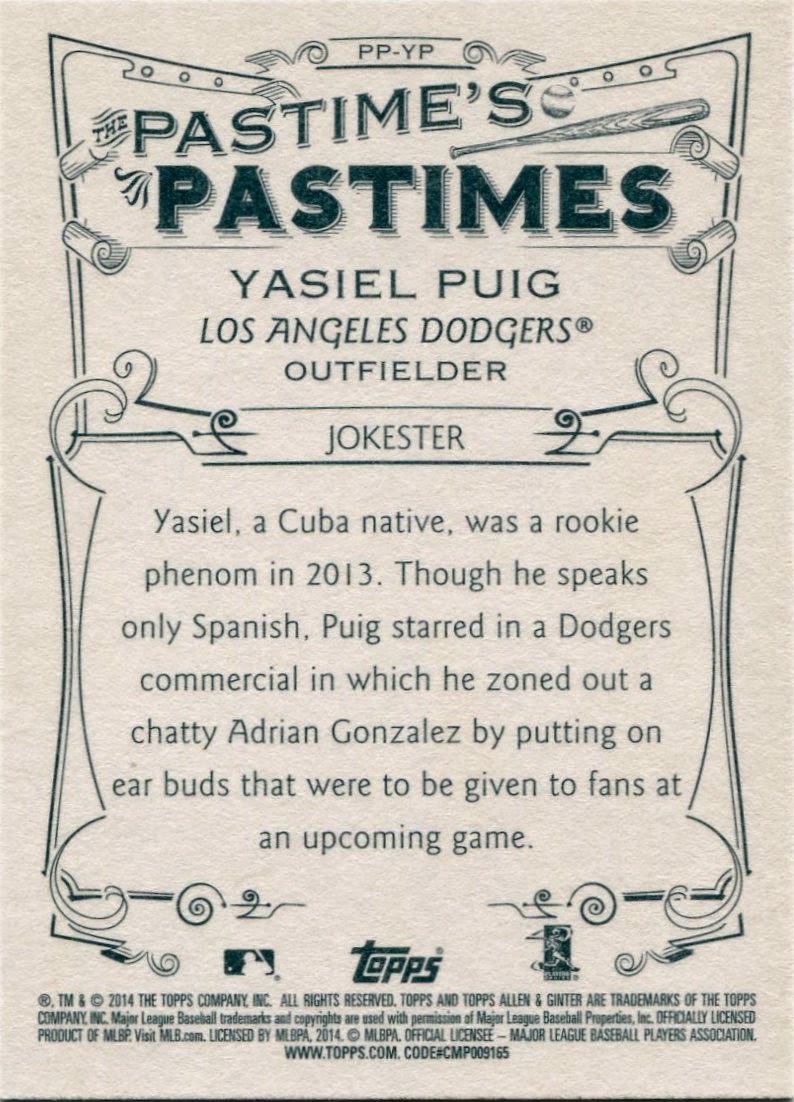 I want a number on the backs of my cards in 2015, not "PP-YP." I can only imagine how much that kind of thing must bug set builders.

And I'm sorry for this long string of negativity, but, with all due respect, being a jokester isn't a hobby. If you can't come up with a good excuse for putting a guy in an insert set, Topps, just leave him out.

Even if it is Puig. 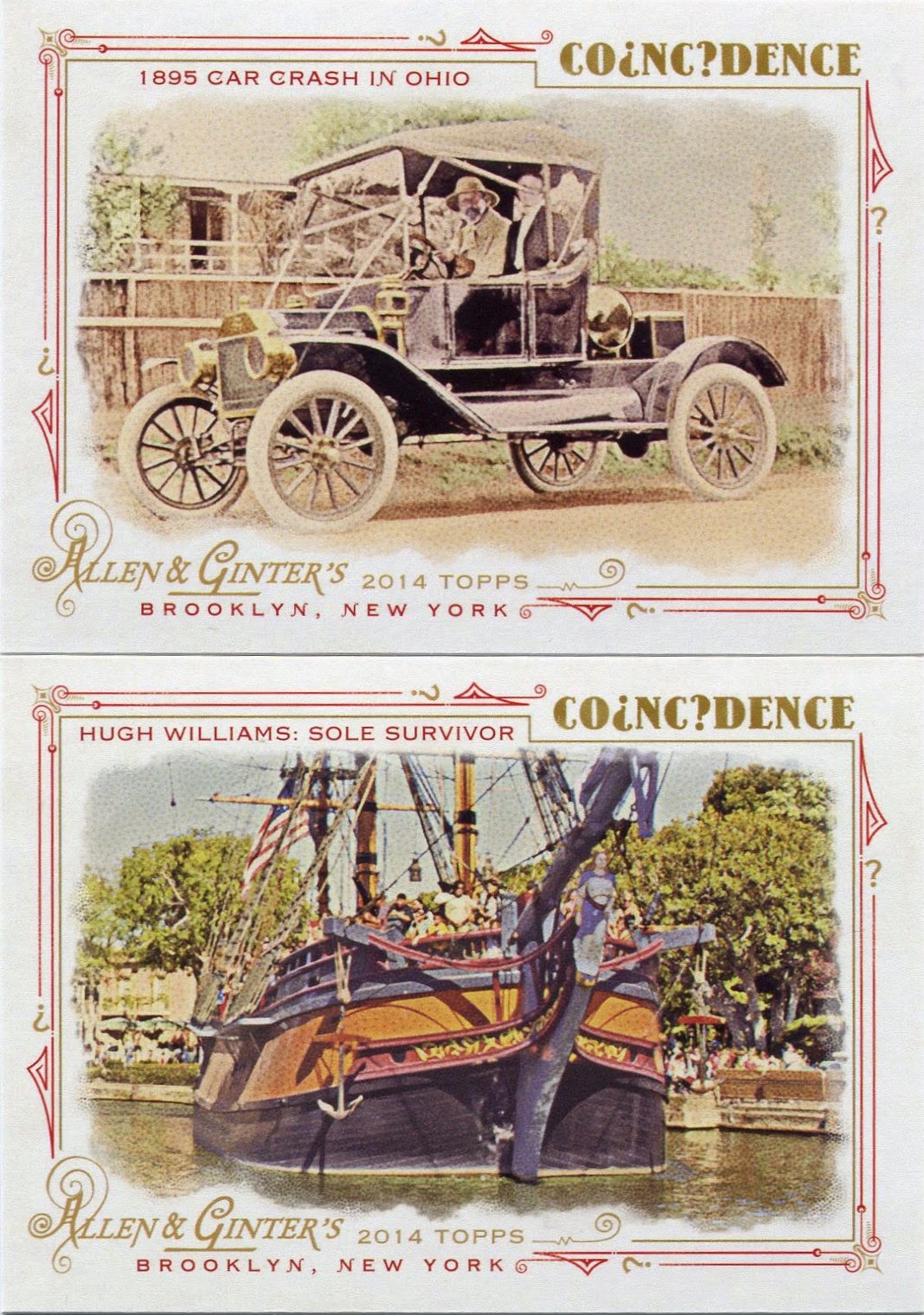 Now that we've got that out of the way, let's look on the bright side of things.

I get why other people might not enjoy them, but I love most of A&G's non-sport insert sets. Last year's "Coincidence" series was one of my personal favorites since I've always had an interest in that sort of thing.

On the bottom, for instance, we have the claim that, over the span of about 200 years, three ships sunk near Wales with only one survivor. And, each time, the lone survivor was named Hugh Williams. Crazy, right?

The one on top might be even better. There were only two cars on the road in the entire state of Ohio in 1895, yet they somehow managed to crash into each other.

From what I know, these particular coinkydinks are debated, but how great would it be if both of them were actually true? 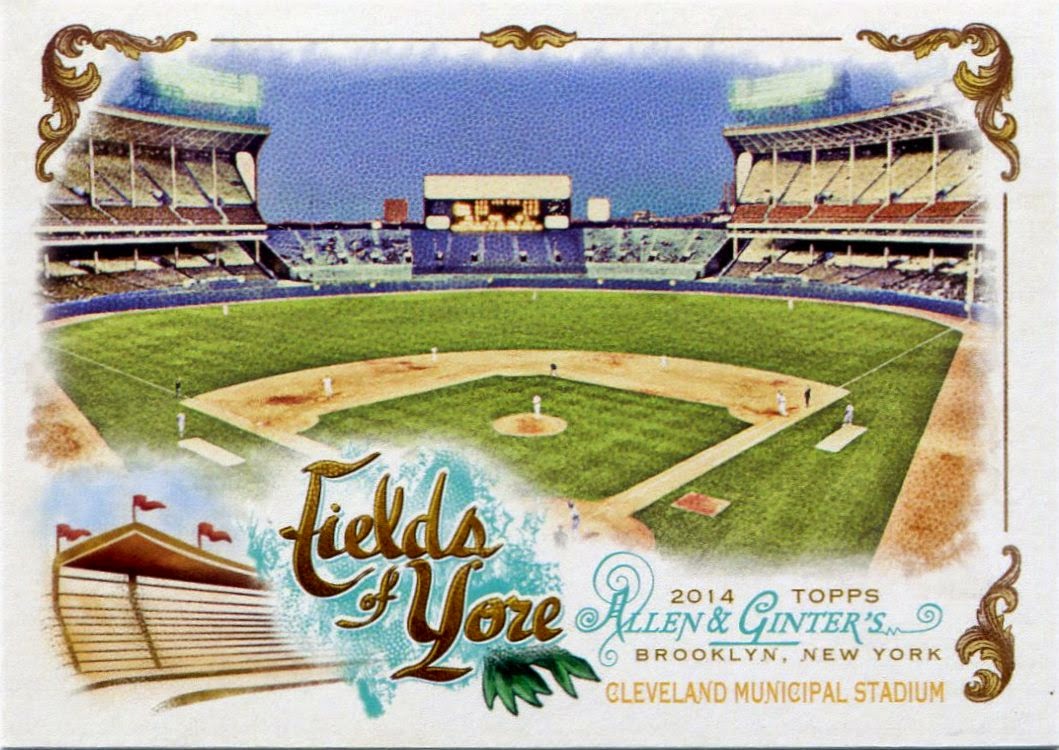 Give me something I haven't seen before.

This "Fields of Yore" series was a terrifically novel idea, and I give Topps a standing ovation for it. An ovation far greater than the three fans at Municipal Stadium can provide.

For the first time in a while, I can honestly say that I'm looking forward to A&G next year. I can't wait to get my fill of it through packs and trades with great people like Michael.

It feels good to be back on the A&G bandwagon.
Posted by Nick at 6:14 PM

I want an insert set of comedians, Marx Bros., anyone? Robin Williams? No Cosby. Too soon?

I've been a little negative about A&G since I got burned by it back in 2012 (I bought four hobby boxes and didn't even get a complete base set), but if it includes more super models I might give it another shot.