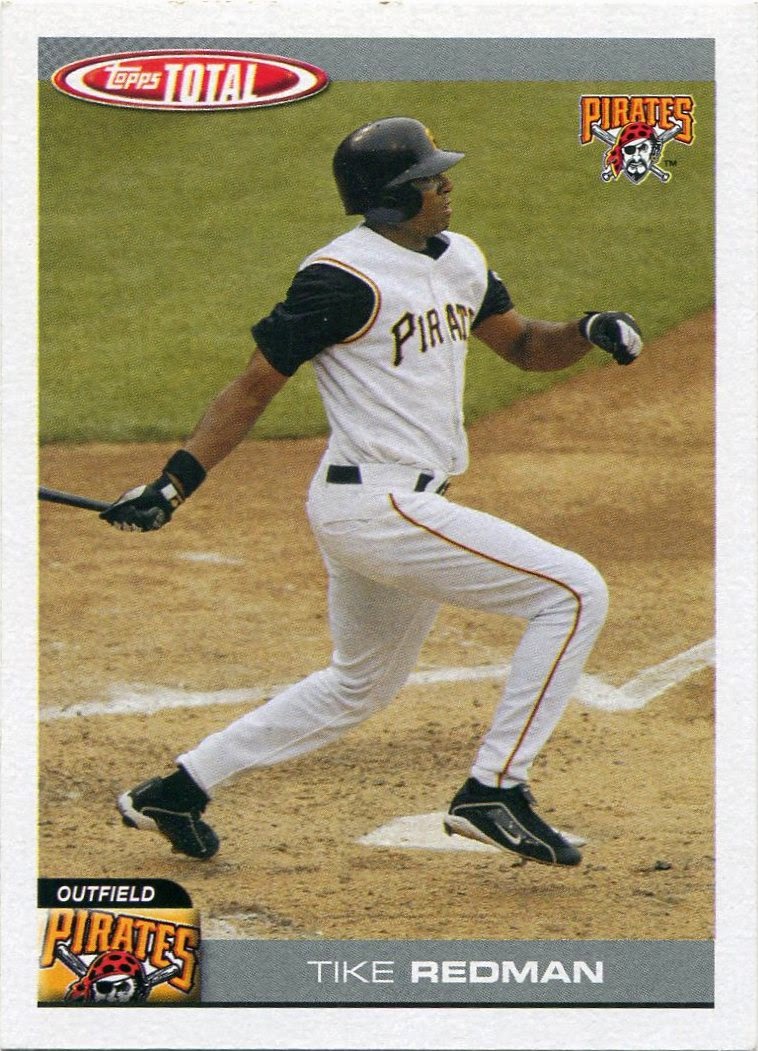 My message to card companies is fairly simple.

If you're going to gobble up the supplies it takes to make a baseball card, then you better have a good reason to print it.

I guess that's the real reason I've praised Topps Total about 6,904 times over the course of this blog's history. I don't necessarily love the brand because of the large checklist itself. It's because Total had a reason for creating each of the 3,630 cards it printed over its four-year history.

Total gave the Tike Redmans and Tim Spooneybargers of the baseball world a chance to shine. Sets with smaller 200-card checklists didn't necessarily have the opportunity to do that.

Topps Total and its 990-card sets might be crazy, but it's a good crazy. 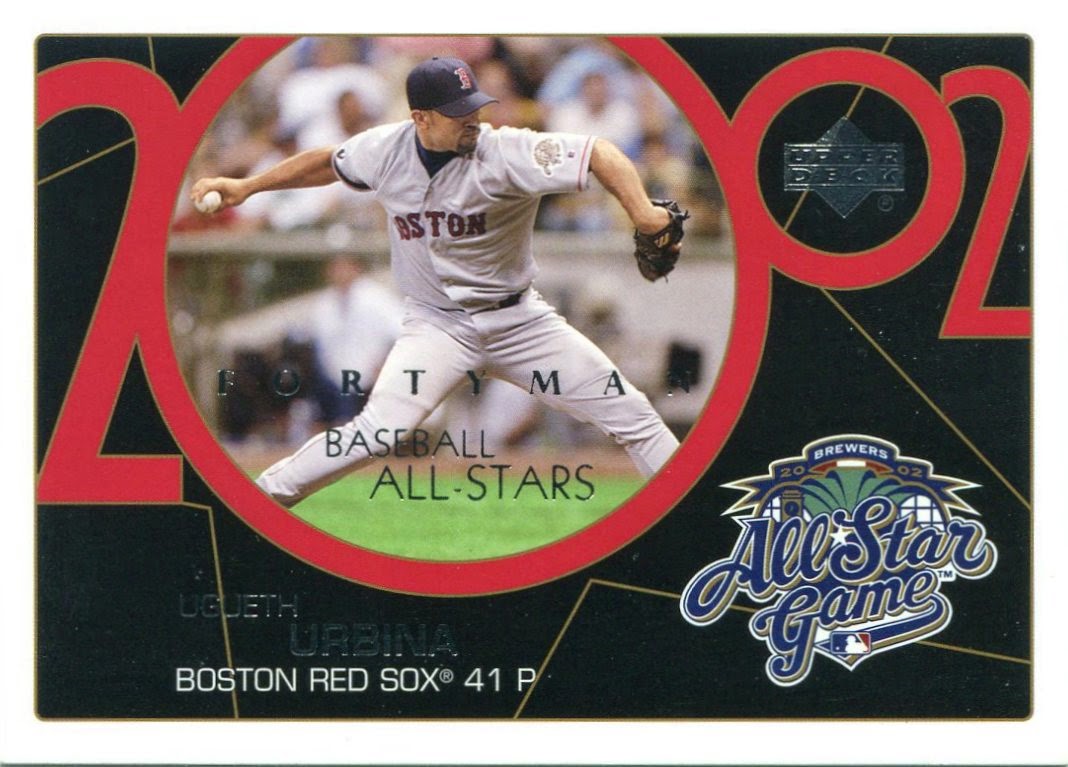 Still, there is a point where craziness can become outlandish in the world of baseball cards.

Upper Deck Fortyman toed that line. The brand's first release in 2002 totaled a whopping 1,182 cards. Its second (and final) set the following year was toned down to just 990 subjects.

Fortyman, as you might guess, featured nearly every player from each team's 40-man rosters. That's an effort I can get behind. However, much of each set's final 100-ish slots are are bulked up with pointless All-Star cards and other various subsets.

To me, that's when you start to bridge the gap between good and bad insanity. 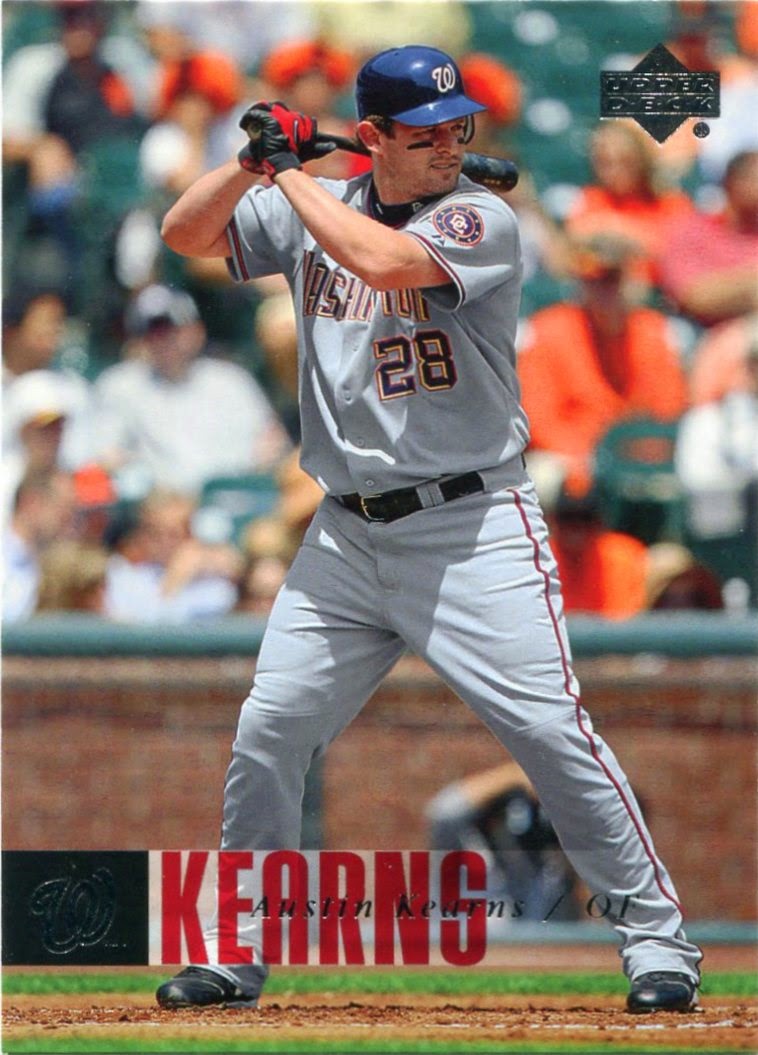 Upper Deck's 2006 release might be the best example of that.

UD produced an unheard-of 1,250 cards over the course of three series in '06, easily the most in their history. It more than doubled their 550-card checklist from the year prior. This Austin Kearns is #1214 in the set. I can't say I own many cards with four-digit numbers on the back.

The set certainly featured a great variety of subjects, but, like Fortyman, there are quite a few pointless subsets and checklists mixed in as well. And, like the Topps syndrome these days, you'll find quite a few repeat players within those 1,250 cards.

I'm still torn on whether or not I should consider 2006 Upper Deck to be a noble effort or a crazy experiment. 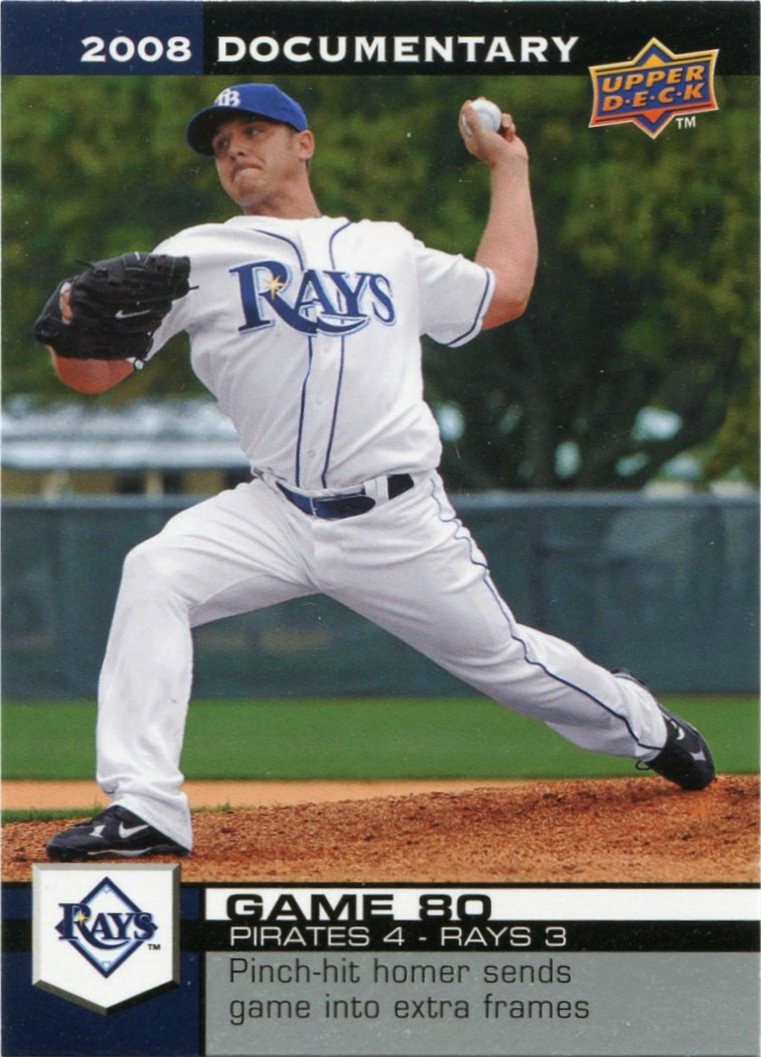 However, a few select sets completely outdo everyone else in terms of sheer insanity.

And I'm not talking the good insanity, either.

These sets are pretty much the polar opposite of the old "less is more" proverb. There aren't many adjectives to describe what I'm about to present.

If 2006 Upper Deck and its 1,250-card checklist is crazy, then I'm not sure what to call 2008 UD Documentary. In case you aren't familiar with it, the set tried to commemorate every single game played during the 2007 MLB regular season.

Set builders, eat your heart out. 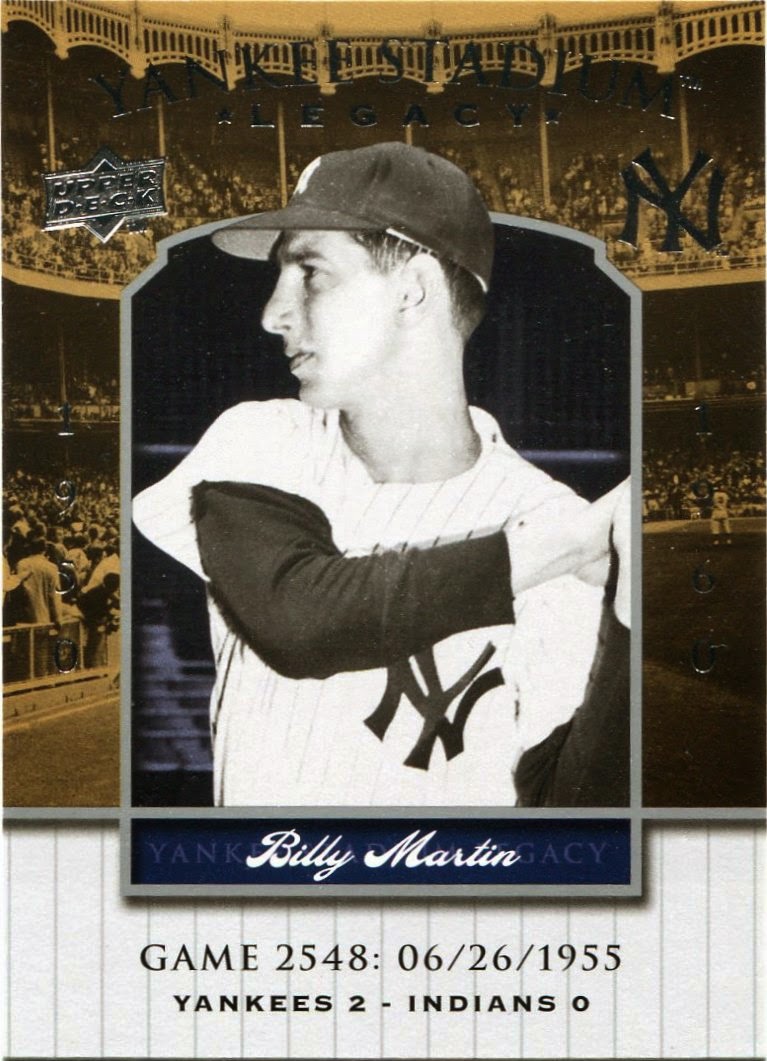 Oh, was that not insane enough for you?

Give Upper Deck's 2008 Yankee Stadium Legacy a try, then. In honor of Yankee Stadium's final season, UD produced a card honoring every single game played at The House That Ruth Built.

And, unlike Documentary, these were inserts, not base cards. A 6,227-card insert series.

That has to be the biggest set ever, right? 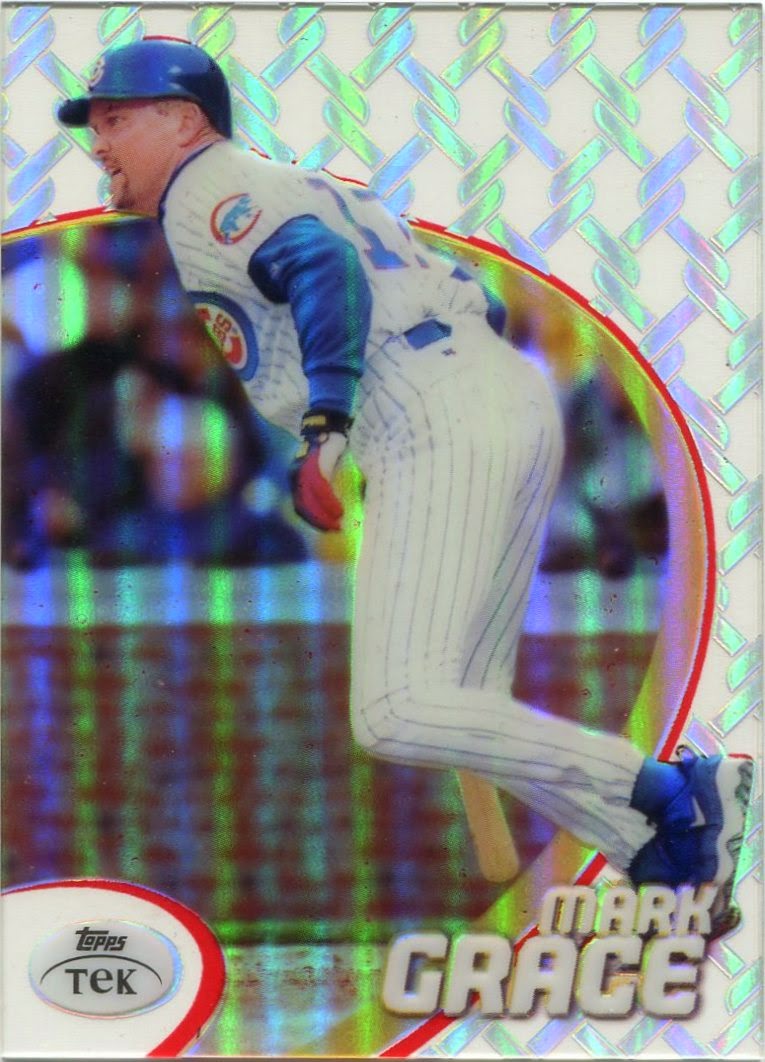 At first glance, 1998 Topps Tek seems to be a fairly easy checklist to swallow. It's all of 90 cards.

If you take a closer look, however, you'll find that each of those ninety cards features ninety different acetate patterns on the front. I'm no math major, but let's see, ninety times ninety is...

8,100 cards. As in almost two thousand more than the Yankee Stadium Legacy set. (Why did Topps decide to revive this brand again?)

Nothing can beat that. 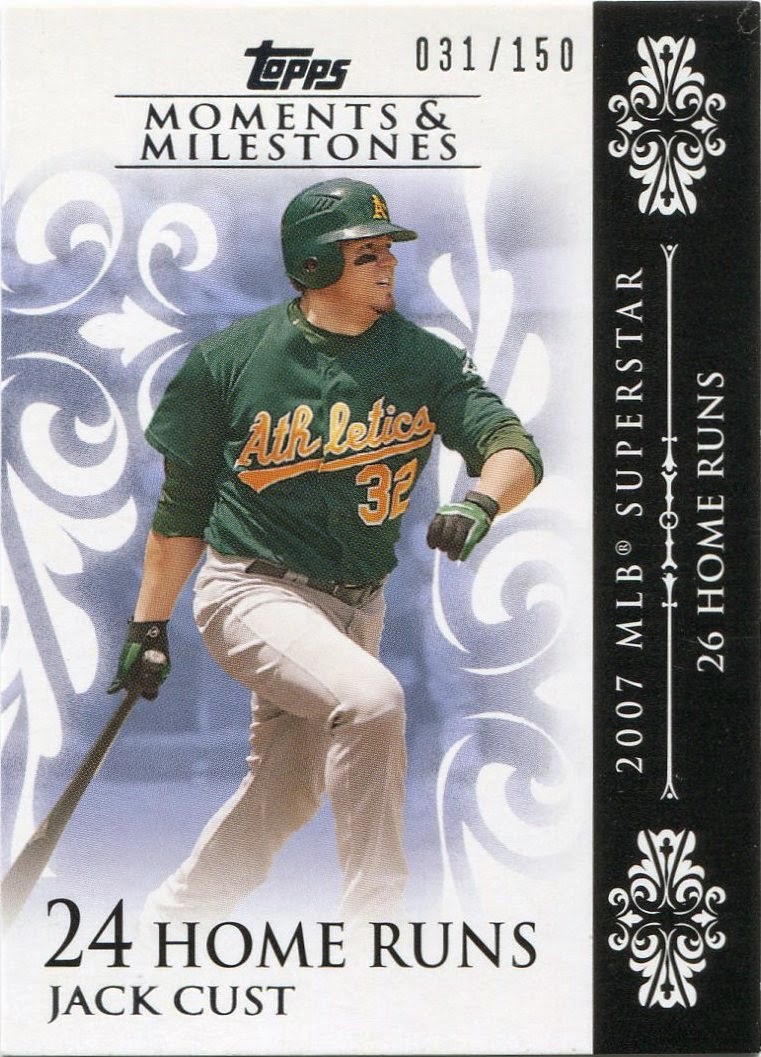 I'll point you in the direction of 2008 Topps Moments and Milestones. Like Tek, it doesn't look like anything special at first. Seems like your standard 189-card checklist.

Ah, but Topps decided to get creative with this set. Creative, as in...Let's make this set so insane that people can spend eighty years of their lives and still not be able to complete it.

You see, each base card is numbered to 150 copies and honors a particular milestone of a certain player. This one, for instance, commemorates "superstar" Jack Cust's 26 dingers in 2007. (Jack Cust? A superstar? That's so 2008.)

Seems simple, right? Nope. Each of Cust's 26 homers are honored with a separate card. There's one for his first homer, second homer, third...and so on. I just so happen to have the one that features his 24th homer of the season.

And this is the shallow end of the Moments and Milestones pool. There's a card for each of Frank Thomas's 513 career homers and Trevor Hoffman's 524 career saves. (Each stat current as of 2007.)

Remember what I said about card companies needing a reason to print every single card they make?

Yeah. I don't think any of these sets listened.

Maybe I should be thankful for only three Yasiel Puigs in Topps checklists these days.
Posted by Nick at 6:35 PM

Why did Topps bring back Tek?
I'm guessing its because they knew it would move enough units since everybody knew that there was going to be one heck of a challenge awaiting them (although the master checklist is quite small compared to it's predecessor). And a lot of the parallels seem to be selling pretty well on the second hand market.

Good Lord, this is a great post. FULL PROPS for finding out how many cards are in all those sets. I get tired just sharing my half baked opinion on the few Padres I scan.

I did not care much for Documentary due to the number of repeat pictures.

I am currently working on getting all of the 1998 Topps Tek patterns of Sandy Alomar Jr. I have 64 of them with another one on its way.

Great post, Nick !
the main problem with Topps Milestone is the sheer ugliness of the cards (and its pointlessness). Documentary is a great idea, but the design does'nt really work. Ah well...

I'm still trying to wrap my mind around Tek. I don't think I'll ever understand how they could think it was a good idea ! (let's do the opposite of First day issue. yay !)

Those numbers are purely insane!

I'd think a little more highly of Moments & Milestones if there was at least a little detail of each particular instance of what they're honoring.

Total and Documentary are the only ones that I would like to see again. Total just because every player deserves a card. Documentary would need a bit of an adjustment though. The biggest would be the photos. Instead of 12 random photos of stars being assigned to the entire 162 game team set. I would use a photo from the actual game being shown featuring the best player of the game for that team. Topps could then actually make 15 Mike Trouts, 12 Bryce Harpers, and 10 Yasiel Puigs. It's doable and COULD be great, but I could live with that set never coming back as well.