Into the Sunset: 2014 farewells 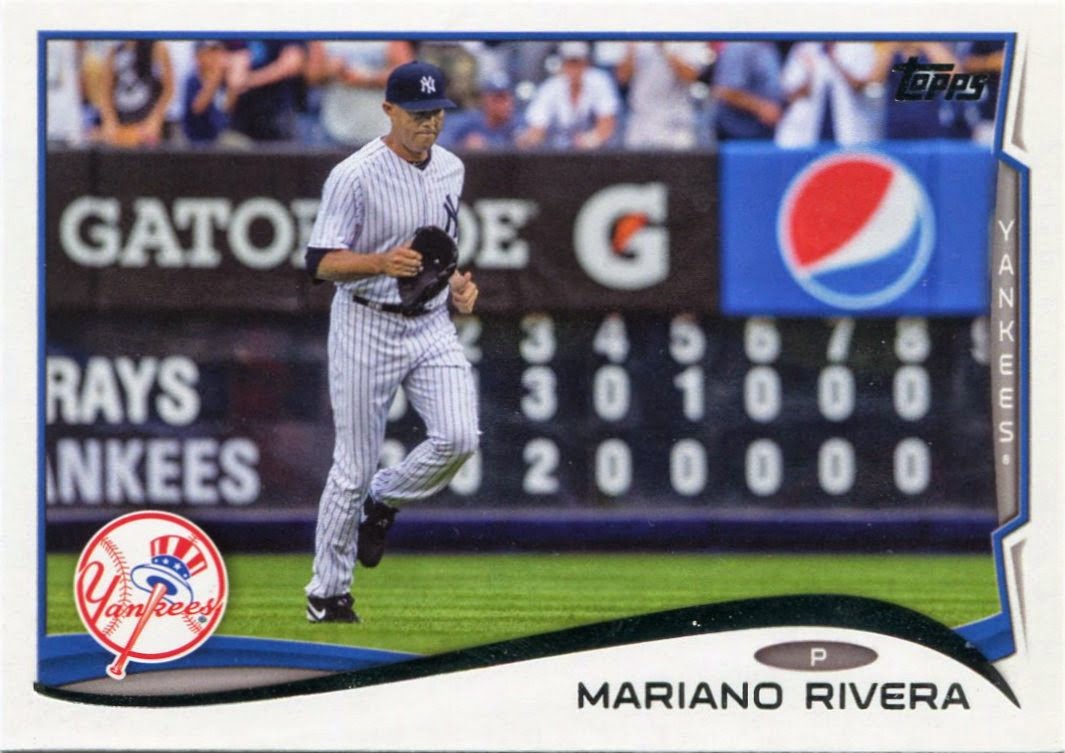 Another year, another batch of retirements.

Every passing season sees a bunch of players hanging up the cleats. As is the life cycle of baseball.

While some of the players we saw in 2014 Flagship might not ever play in the bigs again or get another baseball card (ahem, Jeff Francoeur, Dice-K), the guys you'll see in this post announced their voluntary retirements either after the 2013 season or sometime during 2014.

Maybe it's just me, but this past season seemed especially top-heavy in terms of retirees. Topps had a lot on their plate, and I'm happy to say they did a nice job of giving true finales to many of the established guys who played their last games in 2013.

I'll just say right now that "Mo" received the best sunset card of the year, and it wasn't even close. 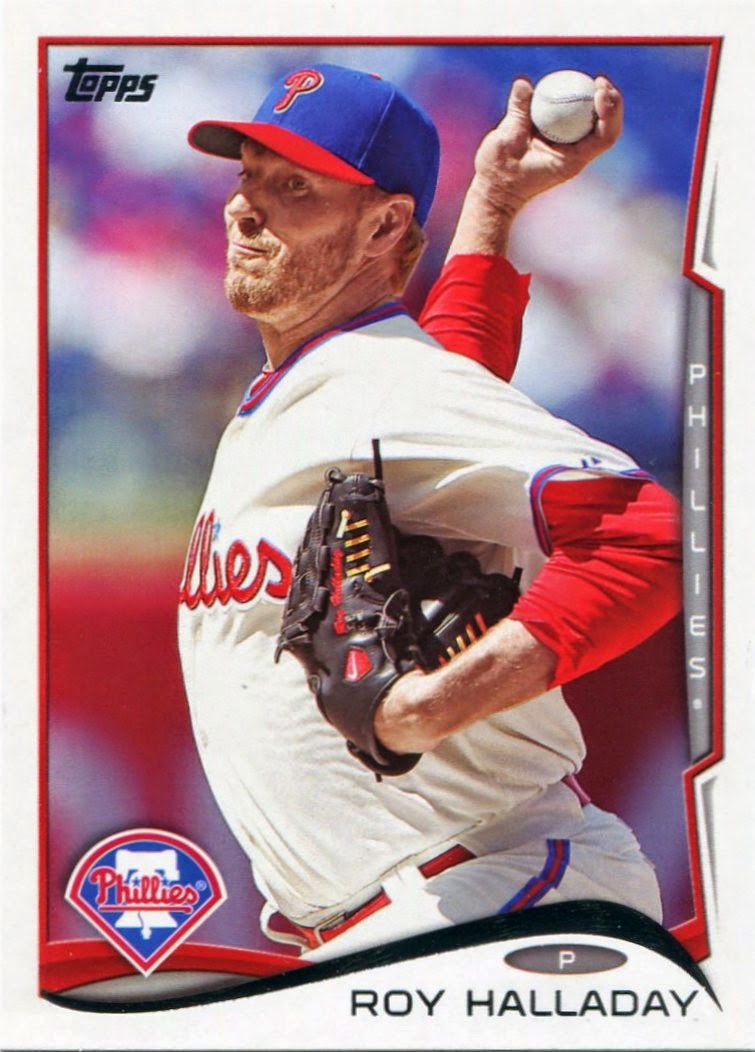 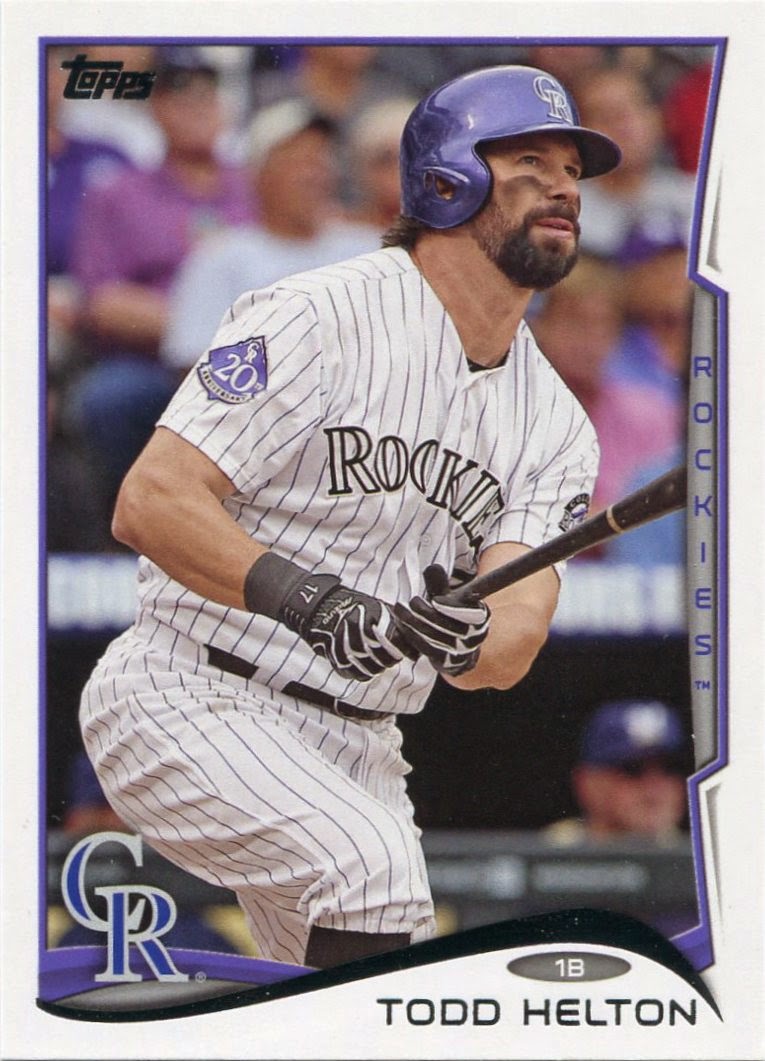 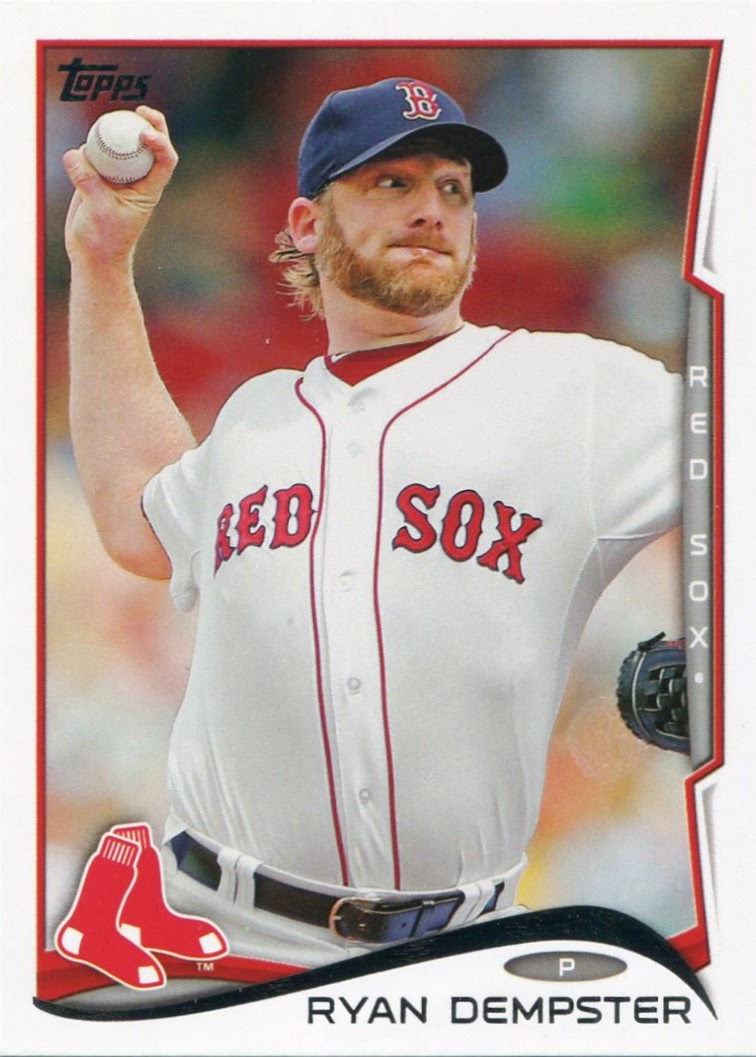 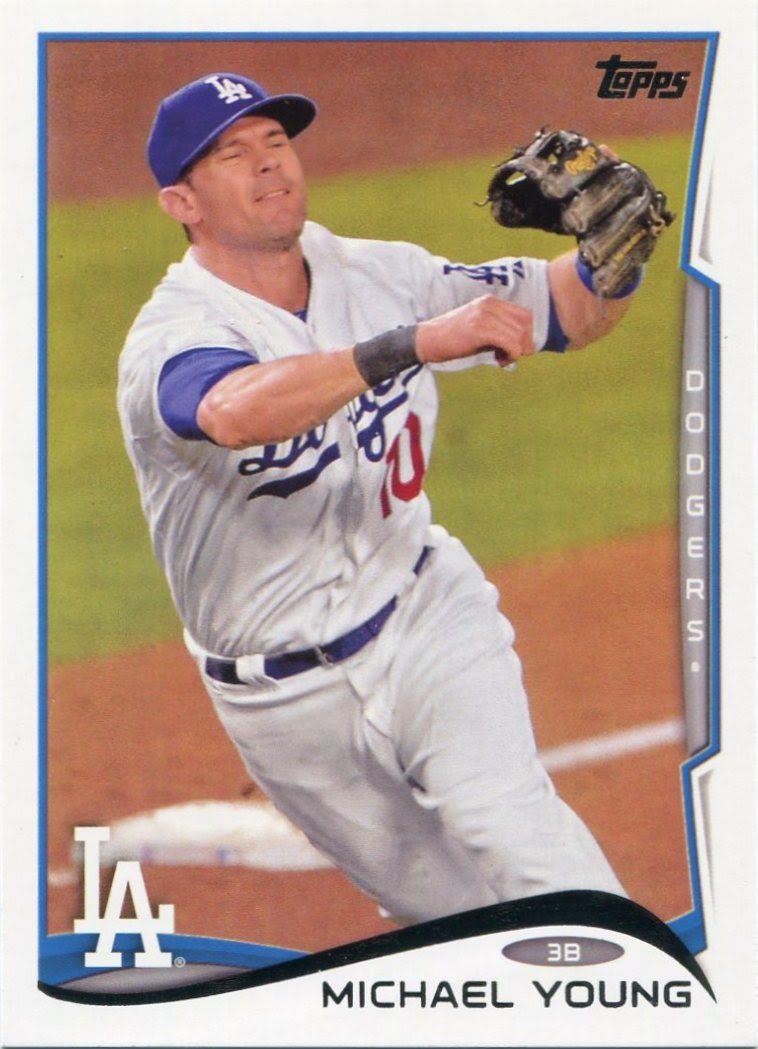 While none of the photos on these other four are especially memorable, they'll each at least be remembered for being the true finales for a quartet of great players.

I've heard the argument that guys who retire after one season shouldn't get a card the next. And, before this year, Topps seemed to carry that train of thought as well. Guys rarely got true sunset cards. Even Carl Yastrzemski couldn't get one, for goodness sake. (I don't count this as truly honoring Yaz.)

For whatever reason, Topps switched gears this year by issuing a nice batch of true final tributes. I couldn't be happier about it. I personally believe every retired player should get a finale issued the following season. 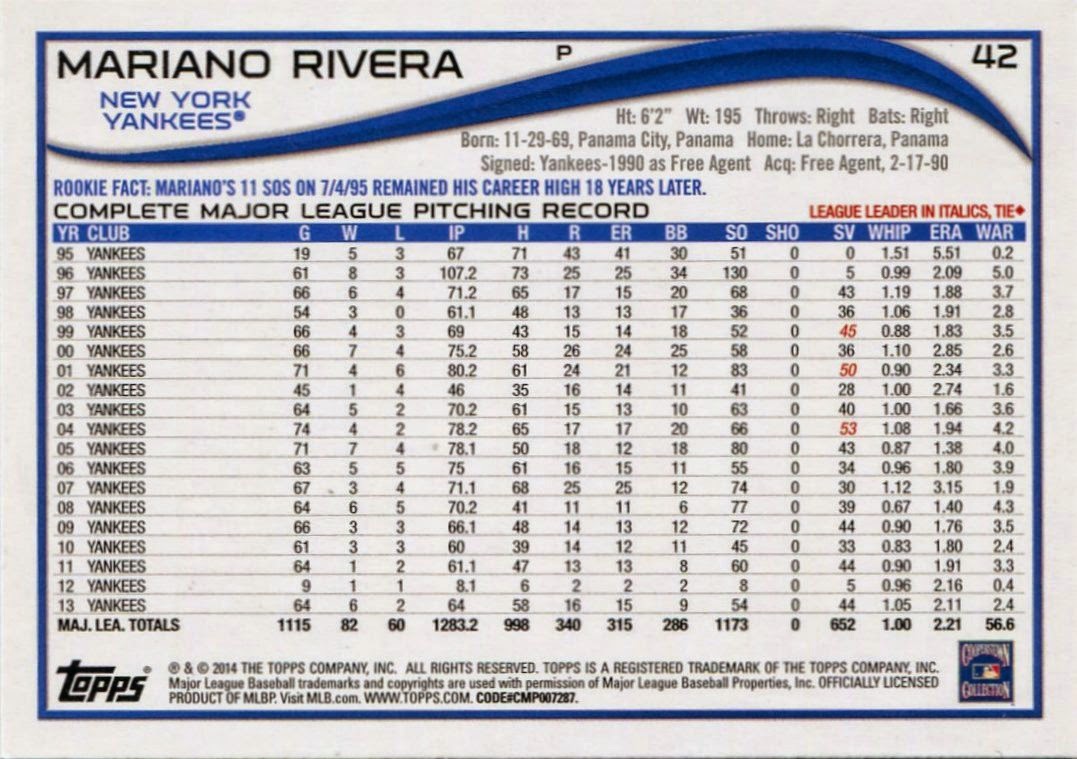 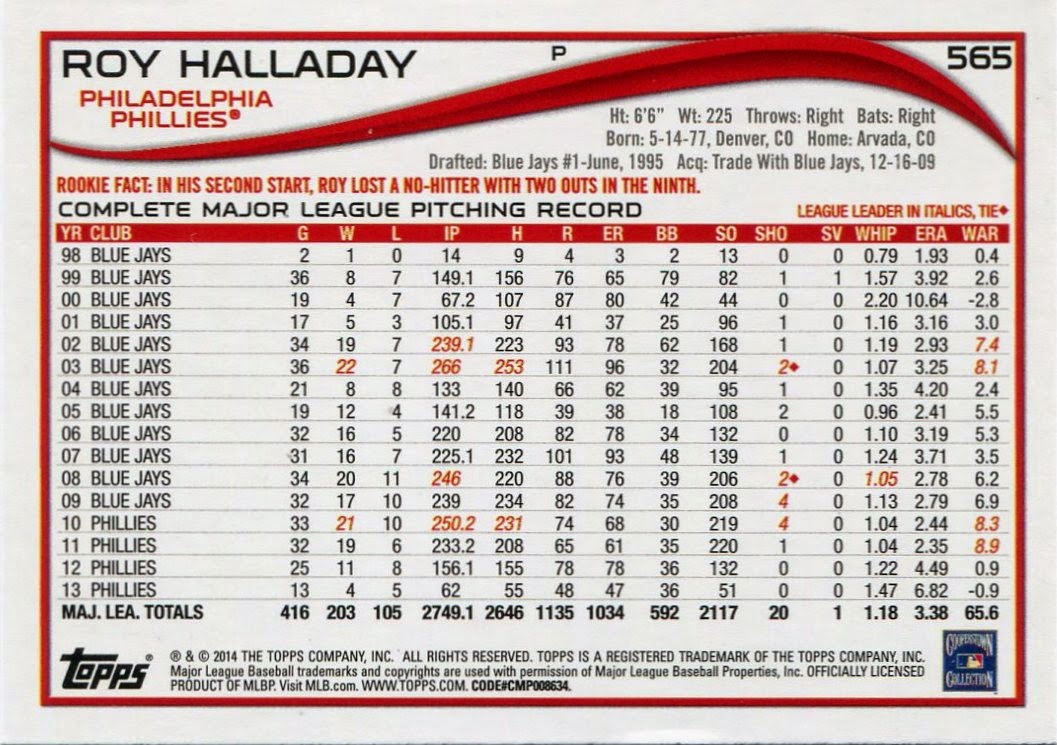 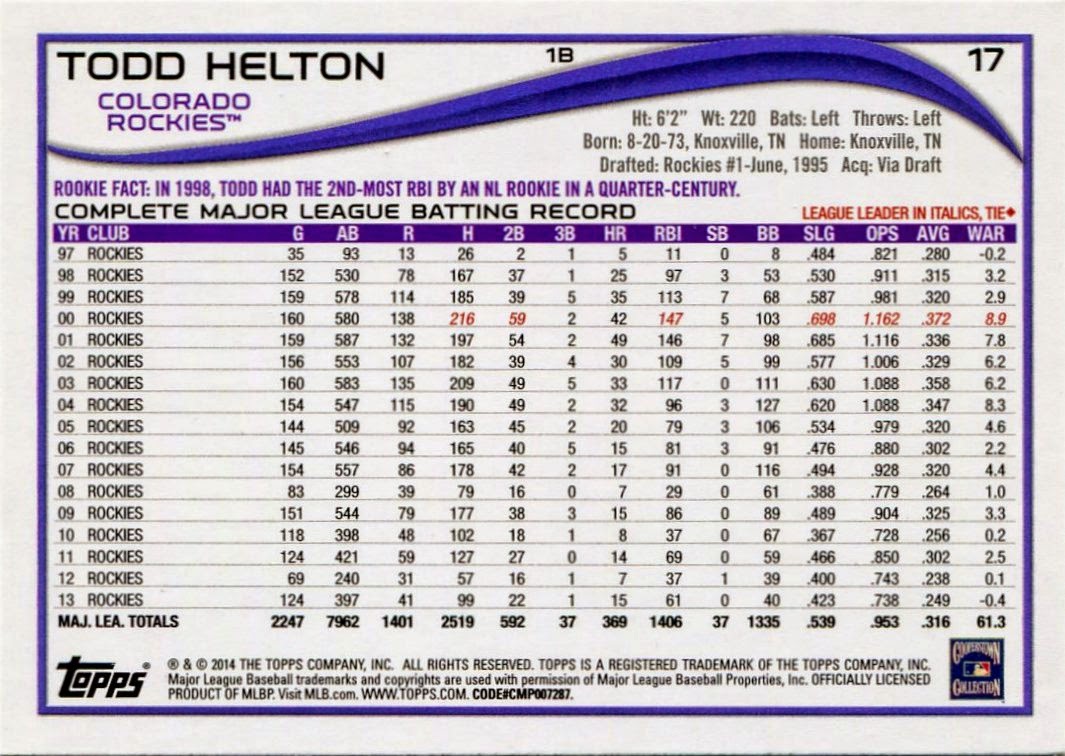 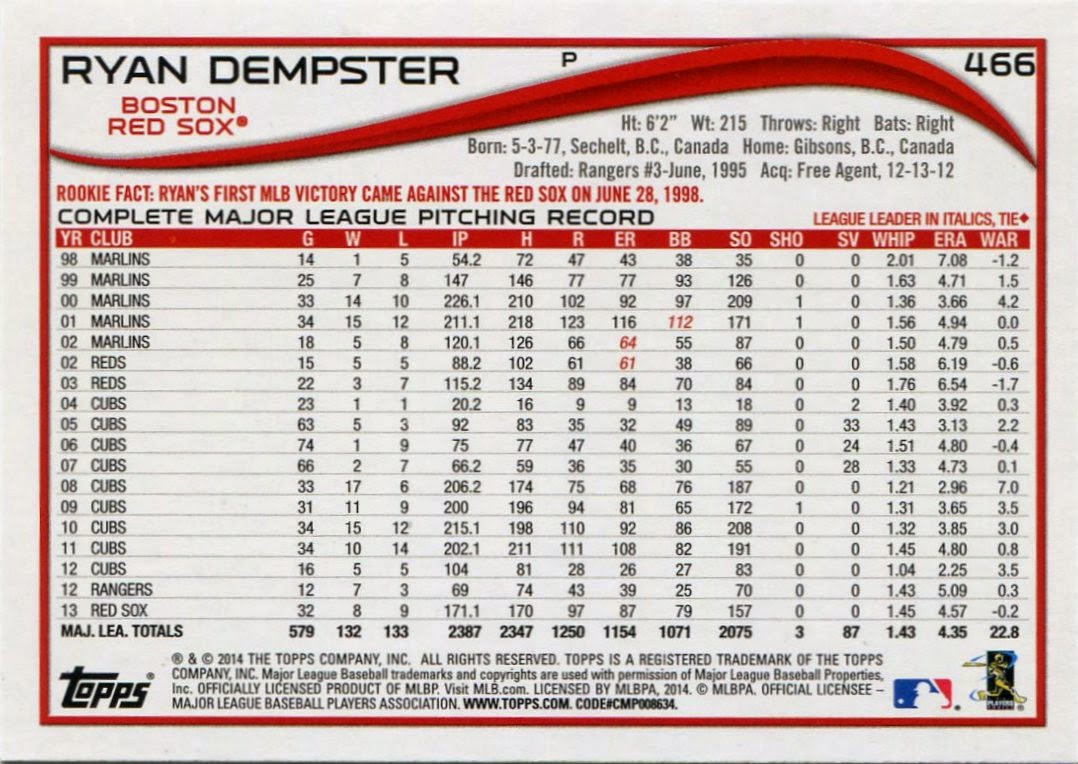 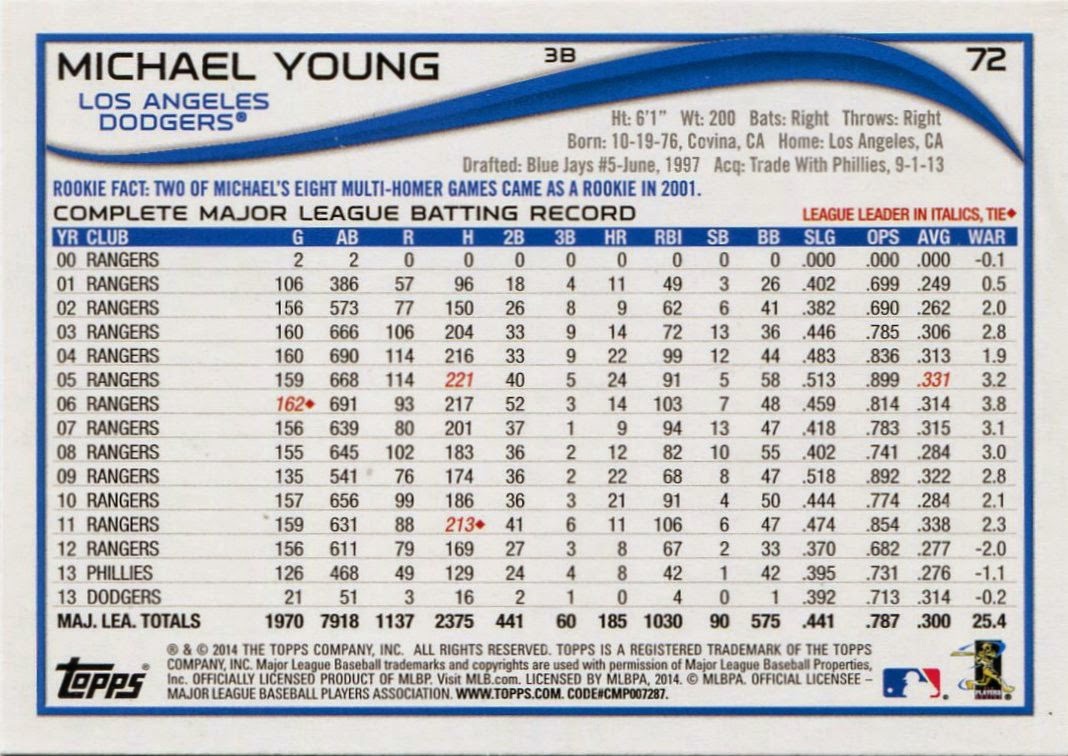 If Roy Halladay's last card was issued in 2013, we wouldn't get that last line of pitching numbers on the back. As mediocre as a lot of final seasons are (including Halladay's), sunset cards feel more special and gratifying with complete career stats on the back.

It's a little odd that Topps waited until Series 2 to release cards of Halladay and Dempster, but I'm glad they got true finales either way.

These guys deserved one last farewell from the world of cardboard. 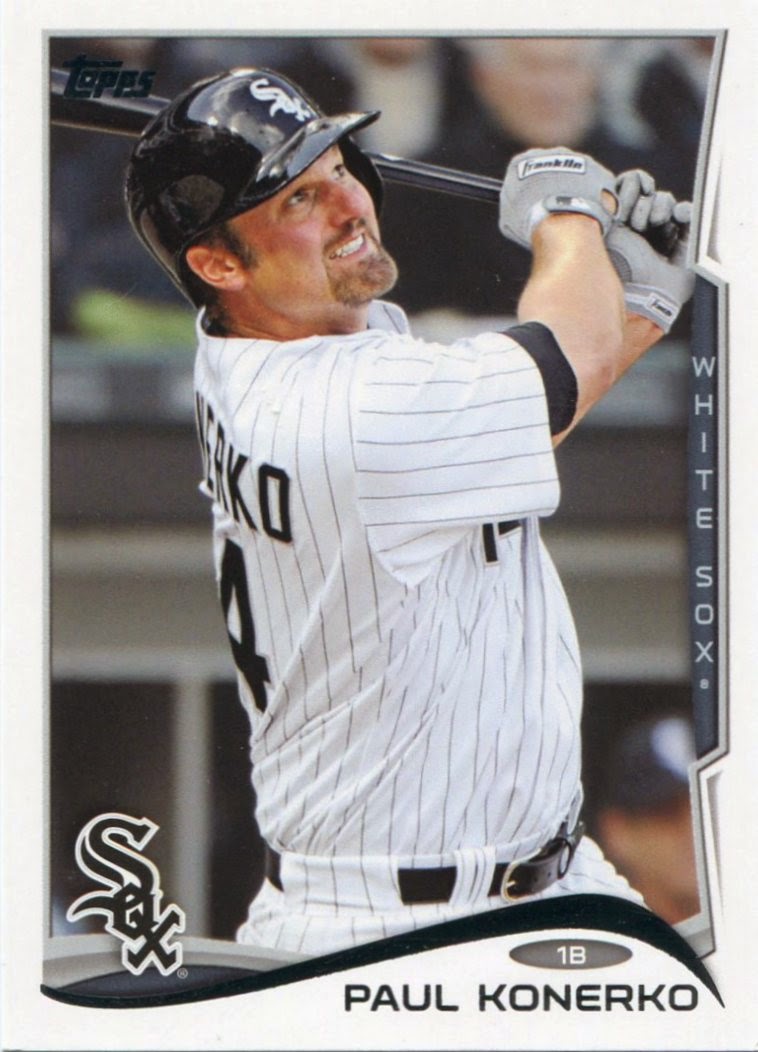 Because of what we saw with Topps this year, I'm hoping most of baseball's 2014 retirees will pop up in 2015 checklists.

Just in case they don't, however, here's a look at the players who waved goodbye to the game this past season.

Paul Konerko's retirement hit home with me more than anyone else's in 2014. Paulie's been on his last legs for a couple years now, and anyone who follows the White Sox knows it was time for him to go.

But that sure won't make the sight of a Konerko-less Sox roster any less easier to swallow in 2015.

I don't know if I'll ever come to terms with it. 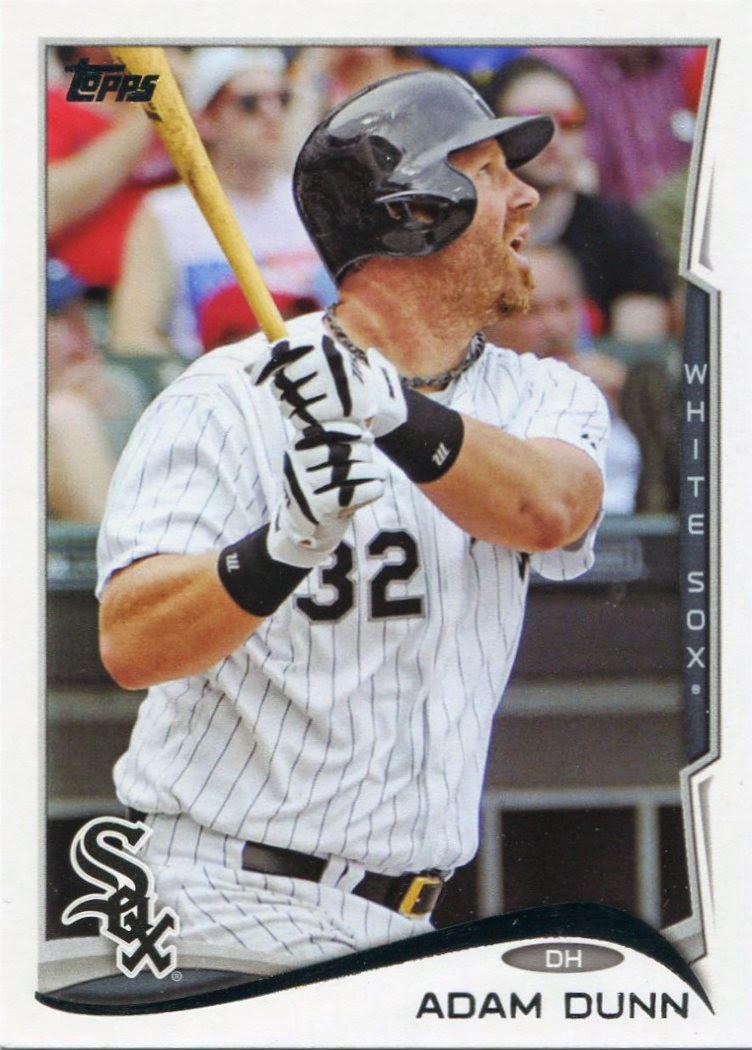 More than any other 2014 retiree, I'm hoping Topps slots Adam Dunn into their 2015 checklist.

Besides the whole career stats thing, a 2015 card would honor Dunn's time with the A's, something that Topps didn't get a chance to do this year since the trade went down so late in the season. 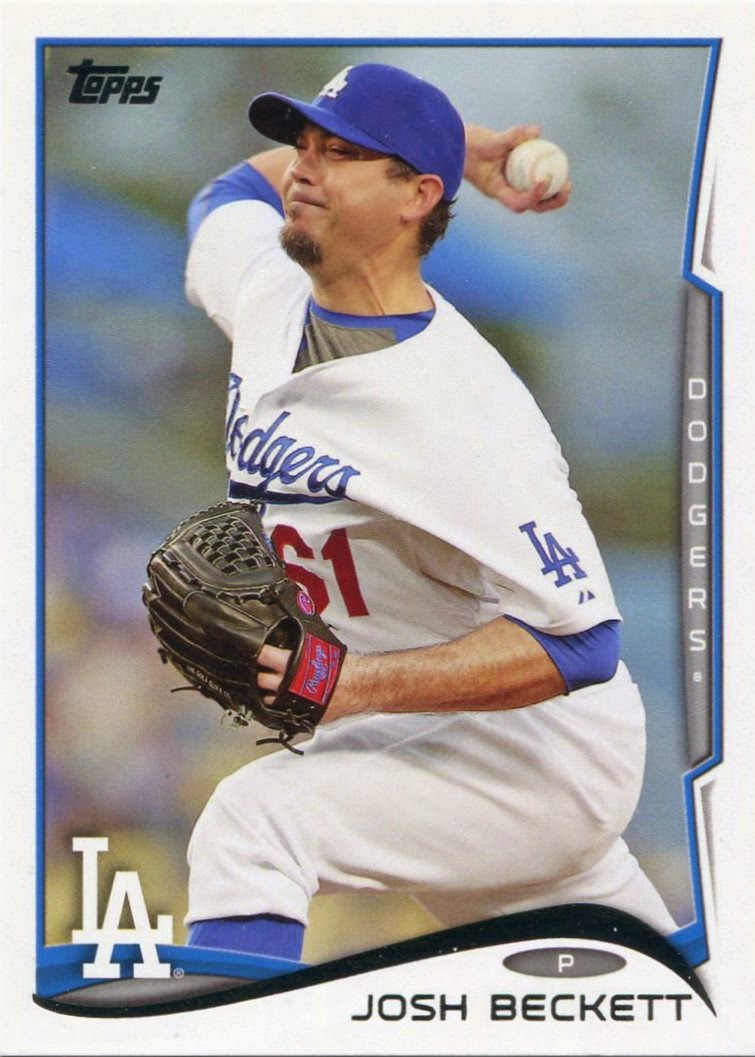 Josh Beckett's retirement caught me a little by surprise.

I know I'll always remember him for the 2003 World Series.

Still one of the single greatest postseason pitching performances I've ever seen. 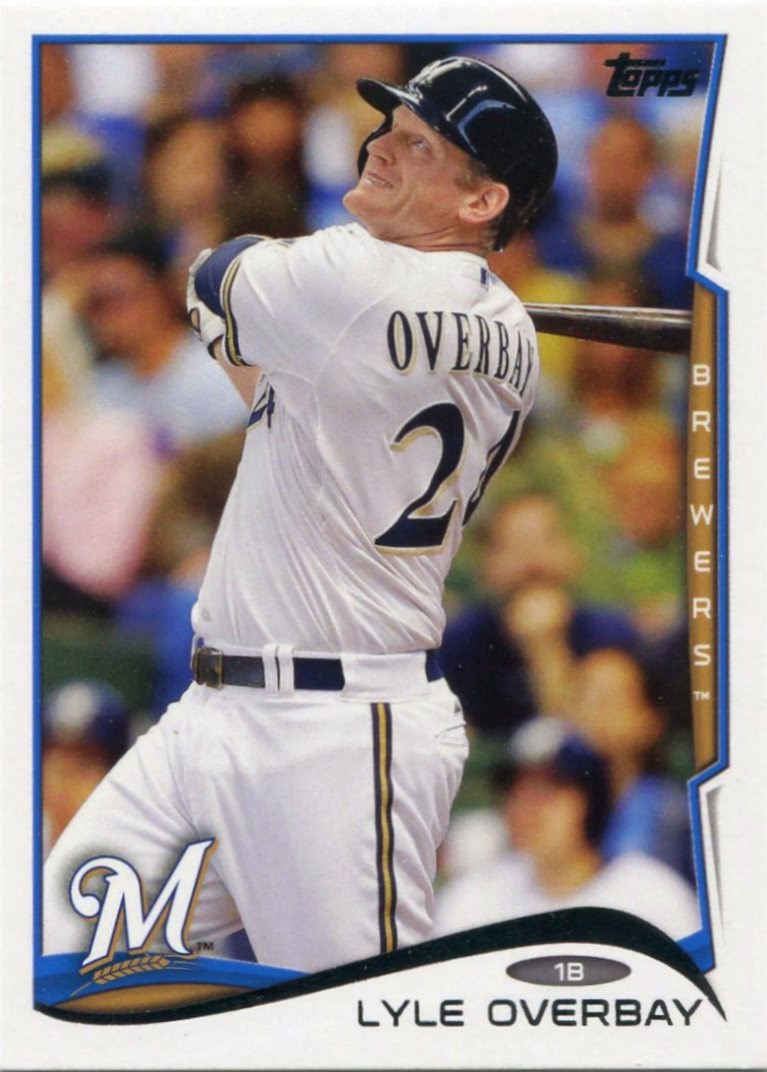 Lyle Overbay was never a huge name during his career, but he's always been a huge name with me and my baseball cards.

Overbay was (and still is) the subject of one of my first big player collection quests, and I own exactly 157 of his cards as of this writing. The first baseman returned to one of his former stomping grounds in Milwaukee this past season, hitting .233 with four homers in 121 games.

This was his only card of 2014, courtesy of Topps Update. I was scared Topps would completely ignore him.

All I can say is thank God for Update. 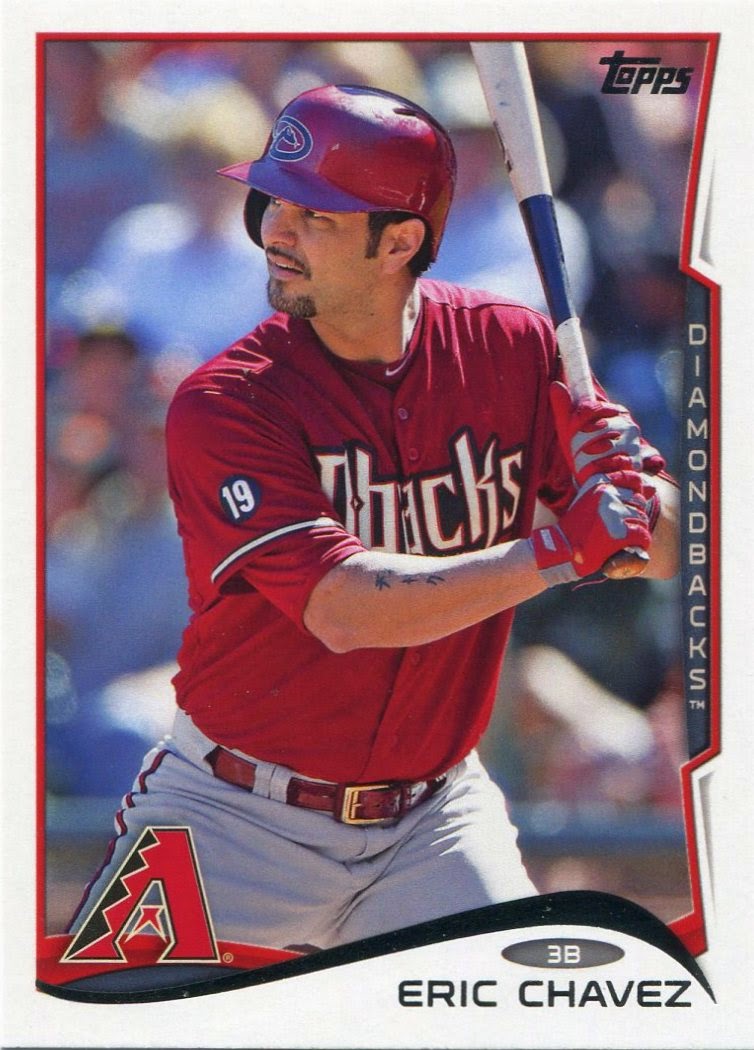 Eric Chavez is another under the radar 2014 retiree.

A once-promising third baseman in Oakland, the last half-dozen years of his big league tenure were absolutely riddled with injuries.

The six-time Gold Glover ended up being a serviceable bench bat with the Yankees and Diamondbacks in the latter stage of his career, but he was a far cry from his former Oakland self. He called it quits after a 44-game stint with Arizona in 2014.

Oh, what could have been. 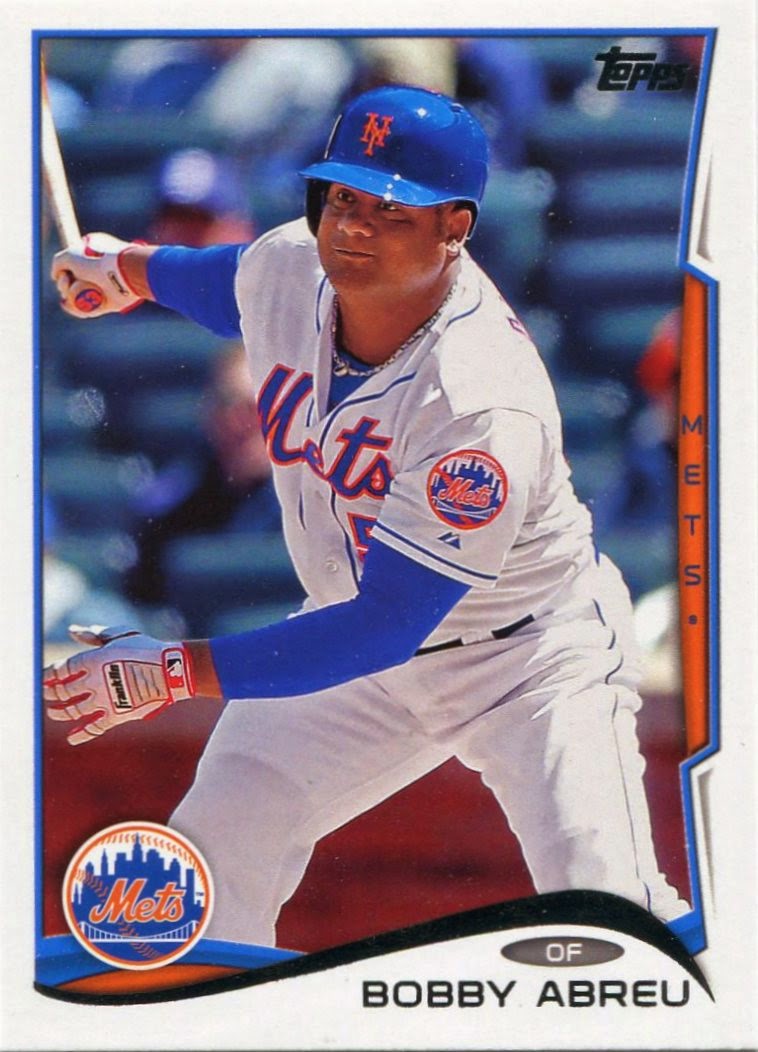 As great as the guy was, Bobby Abreu is the prime example of a player who probably held on for a little too long.

I don't blame big league ballplayers for wanting to milk every last ounce of their talent (and all those fat paychecks) before retiring. But the truth of the matter is that most guys end up playing well past their prime.

Abreu was completely out of baseball in 2013 after a miserable 2012 with the Angels and Dodgers. He latched on with the Mets in 2014 on a minor league deal and was surprisingly called back up to the show about halfway through the season, hitting .248 with one homer in 78 games in the Big Apple.

Years from now, we'll look back on Bobby Abreu's career and say...

When the heck did HE play for the METS? 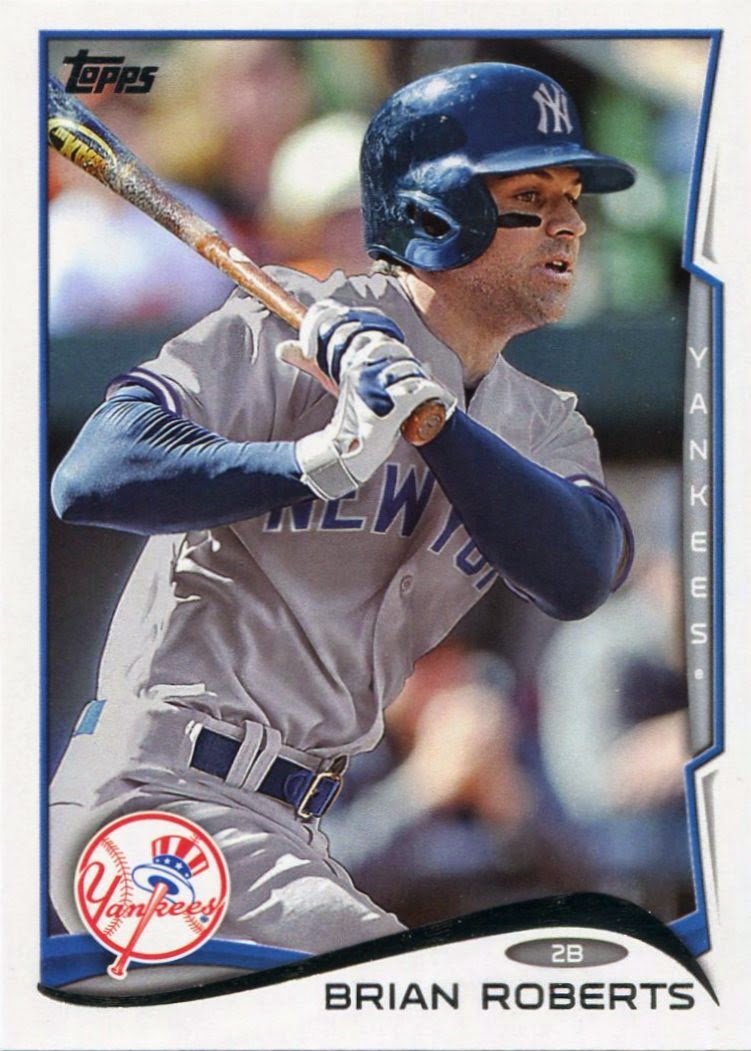 Brian Roberts might be another When did he play there? guy in the years to come.

After spending the first 13 years of his career in Baltimore, Roberts signed with the Yankees in 2014. Sadly, he never really got going and was released in August after 91 games. He called it quits shortly after that.

Roberts is a lot like Eric Chavez, in that he had a few spectacular seasons before being plagued by injuries for the rest his career. I still remember cherishing a "Star Rookie" card of Roberts that I found in a flea market dime box as a kid. I couldn't have been older than 12 or 13 at the time.

I'm still not sure why I got so excited over it, but the card still safely resides in my collection to this day. 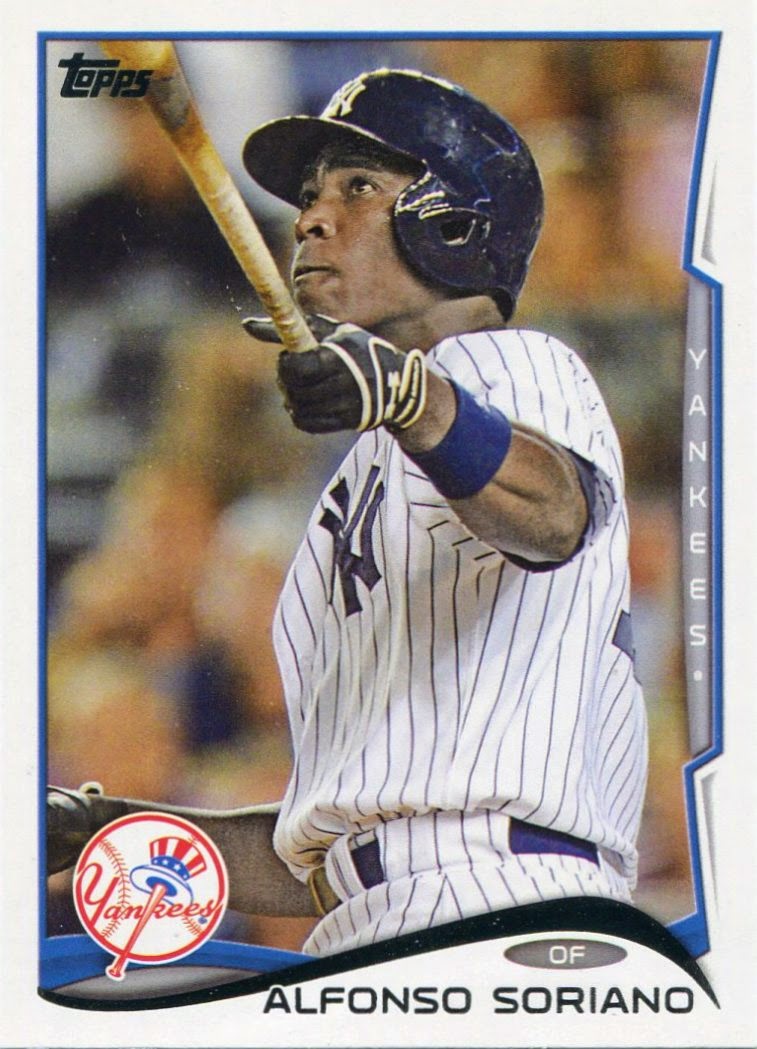 The name Alfonso Soriano probably leaves a sour taste in the mouths of a lot of Cubs fans.

He did actually put up some decent numbers during his time on the North Side, but he could never seem to live down that giant contract. I was always kind of neutral on him. In an era filled with headaches, Soriano had the misfortune to be viewed as the highest-priced headache for the Cubs.

A mid-season trade in 2013 sent the outfielder back to his original home with the Yankees, surprising everyone by hitting 17 homers in just 58 second-half games in the Bronx. However, he struggled in 2014, hitting just .221 in 67 games before being released in July.

I don't know if a lot of Cubs fans are fully over Soriano yet, but maybe they'll cool their jets in the coming years. 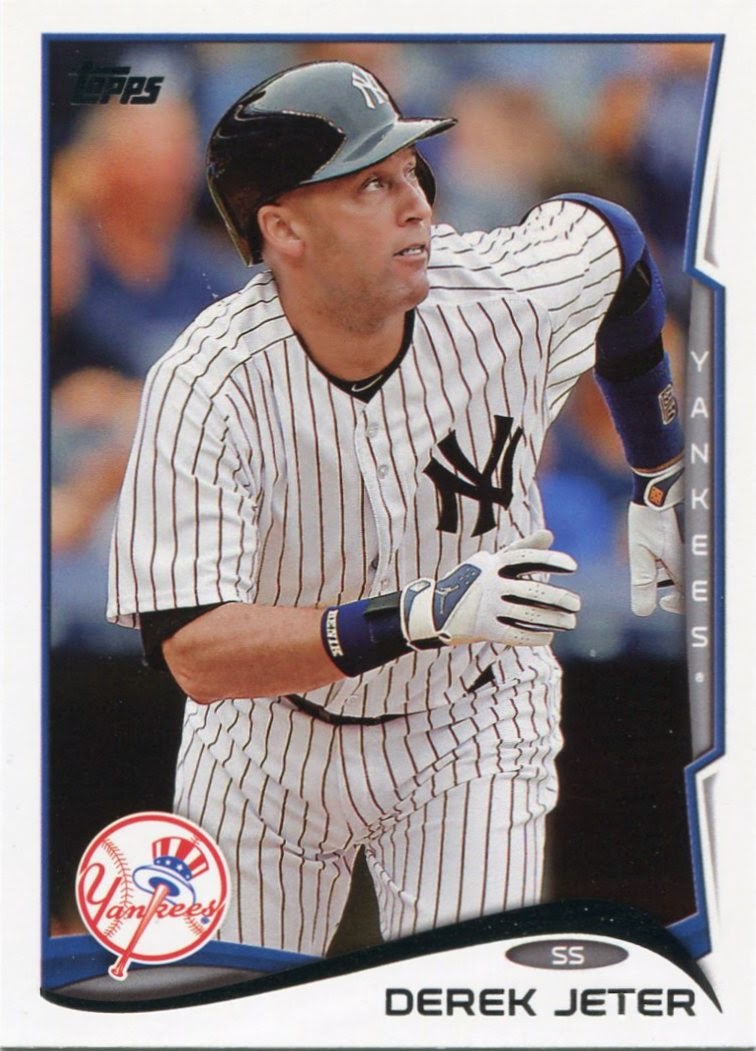 Of course, we have to address the big Yankee elephant in the room.

I don't know if you heard, but Derek Jeter retired in 2014. Weird, because I didn't hear MLB or MLB Network or ESPN or FOX or Telemundo mention a peep about it.

Okay, was Jeter's final season overhyped? You better believe it. Did I get sick of all the teary tributes after the first two days of the season? Yeah, probably.

Still, there's little denying that baseball saw arguably the biggest icon of the last 20 years leave the game in 2014. Derek Jeter is a surefire Hall of Famer, and he's the only Yankee to ever eclipse the 3,000-hit barrier. (Surprisingly.)

And, as much as it pains me to say this, he might well be the last one-team player in history. With the massive paydays that engulf free agency these days, it's doubtful we'll ever see another guy spend his entire career with one franchise.

I'm sure Topps will honor The Captain with a cardboard finale (or finales) in 2015. There's little doubting that.

No matter what your feelings are towards Jeter or the Yankees or whatever, I'm sure we can all agree that he's certainly deserving of a true ride off into the sunset.

Then again, so is everyone in this post. And a lot of other guys I didn't mention, for that matter.

After all, nothing pays tribute better than a baseball card.
Posted by Nick at 6:00 PM

I'll just comment on the former Cubs. I was glad to hear that when Ryan Dempster finally retired he took a job in the Cubs front office. He's a quality guy. Fonzie did frustrate me from time to time and no, he didn't live up to his contract. That happens. But despite all that I think he's also a genuinely good guy and a good teammate. He almost single-handedly took the Yanks to the playoffs.

While Adam Dunn as an Athletic would be nice I'd personally want his sunset card (should Topps make one) feature a photo of his pitching debut.

As for a Konerko-less lineup, if 2014 is any indication Jose Abreu has at least made the transition easier to swallow (the CWS equivalent of the Mattingly-Martinez thing).

Lance Berkman was in Heritage this year. Not a great card on the front though.

Abreu got a short-print in Update that is also a nice tribute. I'm sure it will be in the $1 box or a bit less within a year or so.

awesome post. I follow baseball closely enough, but I always seem to miss all those infos. I had no idea most of these guys (except for the elephant) were retiring

I am more partial to the Todd Helton card 2014 topps #253 that shows his hands in the air thanking the fans. I was at that game and it was his final home game of his great career.