Last night (or this morning, I guess), I blogged about a local card shop that has some cool little team bags with about 30 cards a piece at an EXTREMELY cheap price.

My first "Card Shop Fun" post has more on the specifics of these bags. And no, I didn't pull anything nearly as good as the big hit from my first post. But I really wasn't expecting to; that one was enough for me! But that doesn't mean all the rest of the bags were duds! 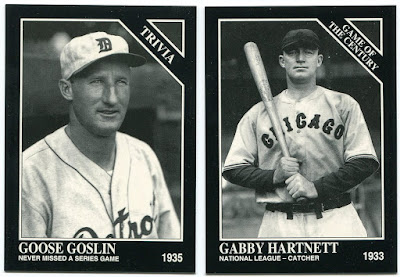 I bought all 16 of the team bags that the guy had left. To get the most out of the 3/$1 deal, I picked out a '93 Conlon Collection packs which were on the same rack. I would've bought more of these, but 1) I wasn't sure if I had all the '93 Conlons I needed, and 2) I didn't have enough cash on me.

Turns out I do still need some from '93 Conlon. These two cards are nice additions to my collection. 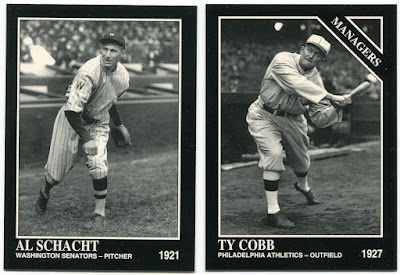 I've got these two already, but they deserve a mention. Al Schacht was a mediocre pitcher who played from 1919 to 1921. Nicknamed "The Clown Prince of Baseball", he and pitcher Nick Altrock teamed up, developing a comedy act which would be performed for millions over the next couple decades.

Any card of Ty Cobb is cool. Especially ones that picture him in a Philadelphia A's uniform. 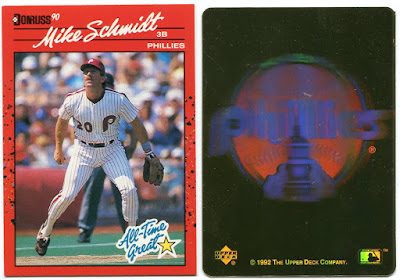 Pack #5 was another pack filled with the horrid 1990 Donruss set. However, I kinda like that Mike Schmidt one, I'm not sure why. Maybe it just looks better next to that Phillies hologram. 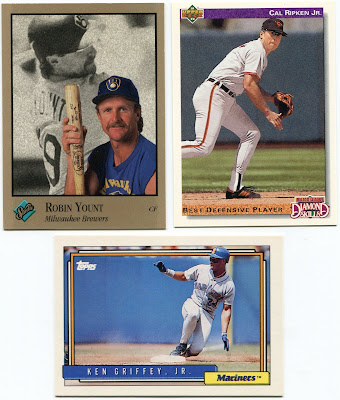 God, were those Studio cards of the early '90's horrendous. Why would I want to see a studio shot of a player over an in-action one? This bag had quite a few stars in it, including Griffey and Ripken.
Pack #6 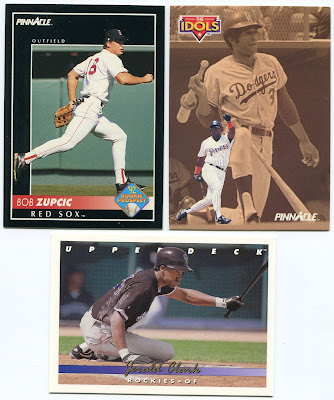 This bag was mostly filled with 1993 Upper Deck singles. The "Idols" cards (top-right) are some of the best in the product. How many cards are you going to find of Tony Gwynn and Willie Davis?
I haven't looked it up, but I'd be willing to bet that Bob Zupcic is last on the alphabetical list of major leaguers.
Jerald Clark looks like he's about to charge the mound. Looks like he just got brushed back and got up saying, "Did you just do that? Really?". 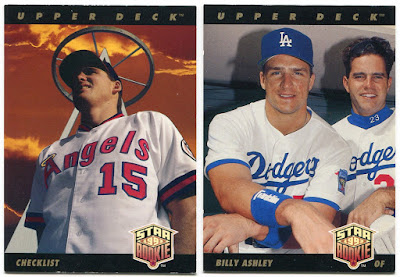 The Tim Salmon checklist card is one of the better ones I've seen from the 1993 UD set. Photography doesn't get much better than that. I'll let the card speak for itself.
"Dammit, Eric Karros, how many times have I told you to GO AWAY?" - Billy Ashley
Pack #7 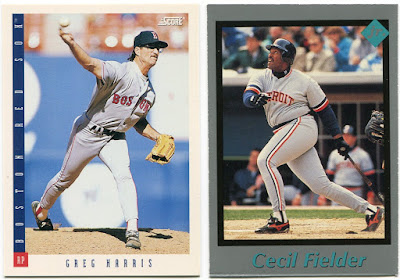 Pack #7 was pretty much crappy all-around. Greg Harris deserves a mention for pitching both lefty and righty in a 1995 game while with the Expos.
I have no idea what set that Cecil Fielder card is from. It looks like a custom of some sort. 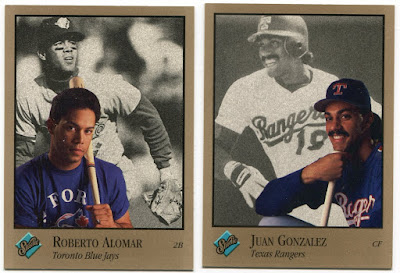 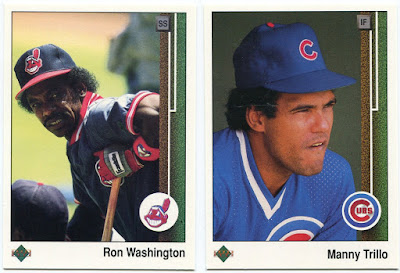 Pack #8 was mostly 1989-91 Upper Deck. One of the first to fall out of the pack was this less-than-flattering photo of current Rangers manager Ron Washington. He was an Indian at one point? Who knew.
The Manny Trillo is a nice addition to my collection of his. I'm guessing that this is one of his final issues. 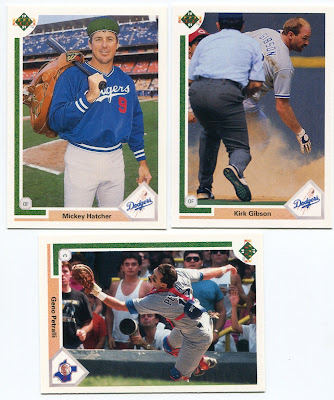 I'll close this post with a look at the good, the bad, and the funny sides of 1991 Upper Deck.
First, it's the funny side of Upper Deck! Those big gloves have been featured on a few cards, like this one. Who better to pose with one of them than all-around prankster Mickey Hatcher?
Then, we've got the bad. Upper Deck is generally known for their fantastic photography, but this is one of the worst shots I've ever seen on a card. All I'm looking at is a shot of an umpire's backside. I can barely see Kirk Gibson or the Reds player he just slid into.
Finally, the good! The '91 UD Geno Petralli shot is one of the best I got out of my packs. The action shot itself is great, taken just after his catcher's helmet vacates his head. But the looks of anticipation in the fans behind him are what I like best about this card. Did he make the catch? Does he have it?
Part three of my pack breaks coming tomorrow!
Posted by Nick at 5:13 PM

That Geno Petralli card is great!

'Tis a good one, it's just a shame that a picture that great was used for an otherwise mediocre player. Wish they could've gotten something like that for the '91 UD Kirk Gibso, because that one's in dire need of a photo upgrade!