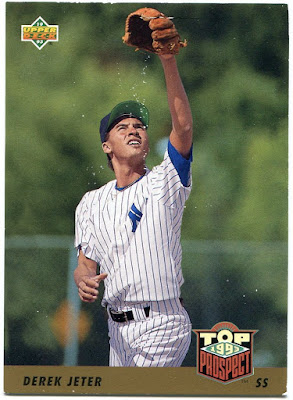 This is the first set I'm including in the GOJW series that doesn't include players from the past.

And they just happened to come out the same year that Derek Jeter, the newest 3,000-hits member, made his first appearances on baseball cards. I picked the Jeter RC up on the cheap at a card show a while back because of its condition. Any rookie cards of a Hall-of-Famer (or future HOFer in his case) are good to have in my book. 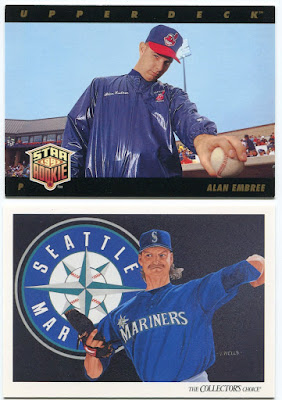 The set kicks off with the black-bordered "Star Rookie" cards. I don't usually like black-border cards, but I make an exception for these. The "garbage bag" workout uniform Embree is wearing on that card really takes you back to issues from the 1970's. 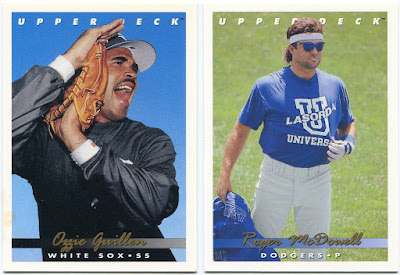 They've got comedic value as well. There's Guillen having a laugh for the camera, and McDowell (a.k.a "The Second Spitter) choosing his college of choice. 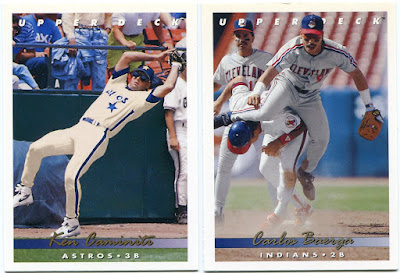 What really makes the set, however, is the photography. The pictures are clean, and most of the card fronts are devoted to showcasing the photo, not the card design.

There's some beautiful in-action shots in this set. First, we've got Ken Caminiti toppling over after appearing to snag a foul pop.

Then, we've got my favorite action shot from the entire set, and one of the best action shots of all-time. Carlos Baerga attempting to hurdle over an unfortunate Angels player, possibly delivering him a concussion in the process. 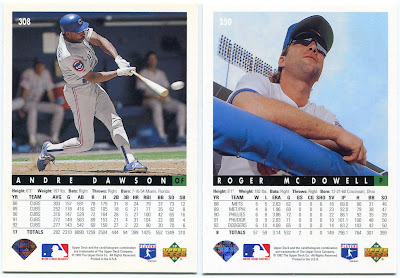 Even the photos on the backs of these cards are great. Heck, they're better than the front photos of a lot of cards I've seen. 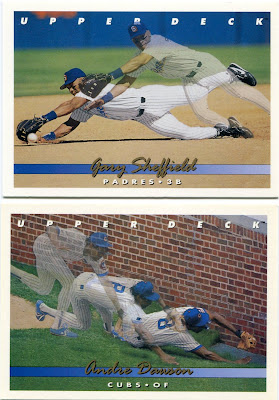 I wish card companies still used some of these double-image photos for cards today. They add a whole other level to the concept of the baseball card.

The Andre Dawson card is one of the absolute best shots I've ever seen, showing him tumbling into foul ground at Wrigley after apparently making a fantastic catch.

This set is my personal favorite non-retro set from the "junk wax" era. Geez, how could it not be?
Posted by Nick at 2:52 PM