The Glory of Their Time, Chapter 2: Al Oliver 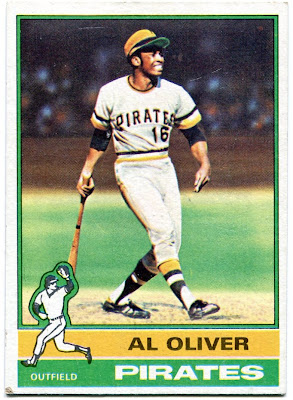 1976 Topps #620 Al Oliver
Often overshadowed by other Pirates stars such as Roberto Clemente and Willie Stargell, Al Oliver had a tremendous 18-year baseball career as an outfielder and first baseman. He was as consistent as they come, and one of the finer contact hitters of the 1970s. Oliver's 1976 issue is my favorite of his, perfectly capturing him in action at the pinnacle of his career. 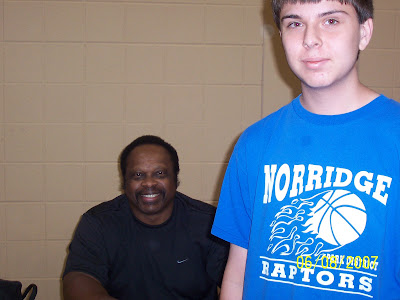 I met Oliver at a card show a few years ago (the same show where I met Bill Lee). A lot of people forget that Oliver was a seven-time All-Star. He's always been one of my favorites, hence this GOTT post. 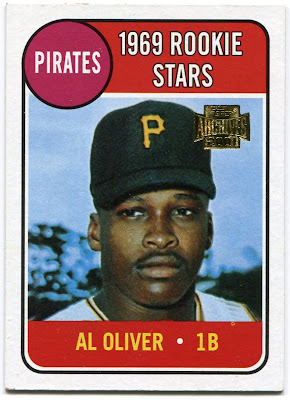 2001 Topps Archives #283 Al Oliver
Oliver's big league career began in 1968, where he appeared in four games for the Pirates and collected his first big league hit. Oliver would not post a batting average lower than .270 from 1969 to 1972, and was a major factor in the Buccos' World Series victory in '71. 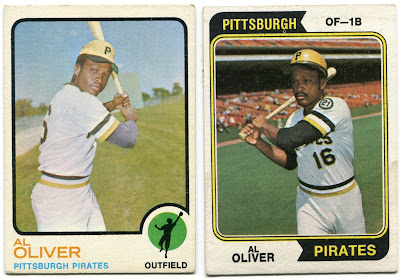 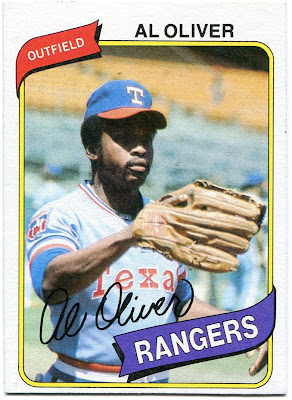 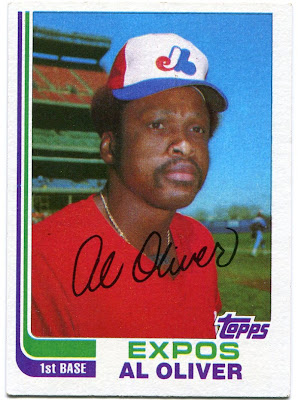 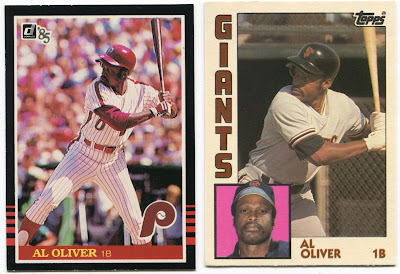 
Oliver would be traded to the Giants in February of 1984, where he'd post a solid .298 batting average in 91 games. He was traded to Philadelphia in August of '84 for the stretch run, where he'd finish up the season. He'd fail to hit a single home run in 119 total games in '84. 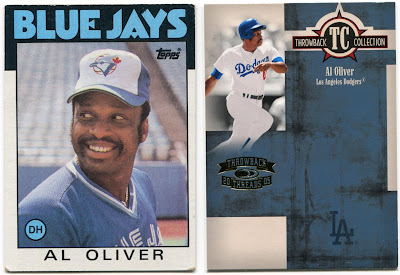 I wish I had an actual '80s issue of Oliver as a Dodger. However, I don't have the '85 Fleer Update that pictures Oliver as a Dodger (thanks for letting me know about that one, Night Owl!), so this 2005 card will have to make do, even though it's half-blank and horrendous.
1985 would be Oliver's final and most underwhelming major league season. He'd again be traded in early 1985, this time to Los Angeles. After an unspectacular 35-game stint with the Dodgers, he'd be dealt to Toronto, where he'd hit just .253 in 61 games to close his career. 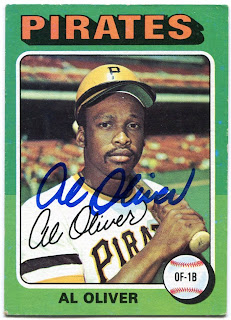 1975 Topps #555 Al Oliver (In-Person Autograph)
He'd finish his career with a .303 batting average, 219 homers, and 1,326 RBI's, as well as being a seven-time All-Star as I previously mentioned. Not a bad career at all, I'd say. He really should get a lot more recognition in the baseball card community. But for now, I'll settle for his autograph. Thanks, Al!
Posted by Nick at 8:17 PM

Man, I wish I had that one. I can't believe I've never seen it before. It's 100 times better than the Dodgers card of Oliver I had to use for this post. I can't remember anyone else wearing #0 since Oliver.

Thanks for letting me know!

Oliver has a Topps traded Dodger card from 85 too, better than the Fleer card in my opinion. I want to say he is in one of those Topps boxed sets as a Dodger (Woolworth or Topps Stars or something like that from around 85/86) with a great action shot, but I may be mixing him up with Bill Madlock.

I have tried to collect Oliver as a 2nd tier player collection, but never got serious about it. I think he is HOF worthy.