How to save on shipping 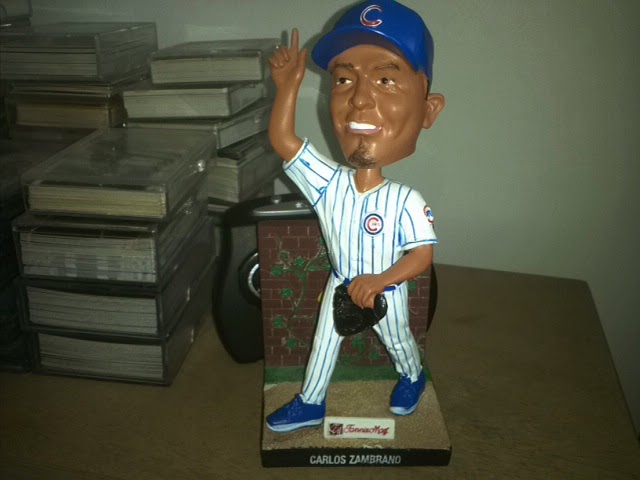 Shipping trade packages can be a costly endeavor.

With postage rates on the rise, I've made less and less trips to the post office over the last couple years. Although I still mail out trade packages on occasion, it makes more fiscal sense to send out batches of PWEs from the comfort of my own home.

But my buddy Jeff of "2x3 Heroes" fame and I found a way around the shipping problem. We simply hand-delivered cards to one another when we met up at a local card show in February. (Which, again, should show you how far behind I am with trade posts. My apologies to everyone who has sent me cards as of late.)

According to Jeff, this "Big Z" bobblehead was my prize for taking second place in his Second Best Blog of the Year contest (so that makes me...third?). I've never been a big bobblehead, figurine, etc. collector, but this thing is cool.

While it wasn't all that funny at the time, I can look back on Zambrano's years in Chicago with a laugh now. 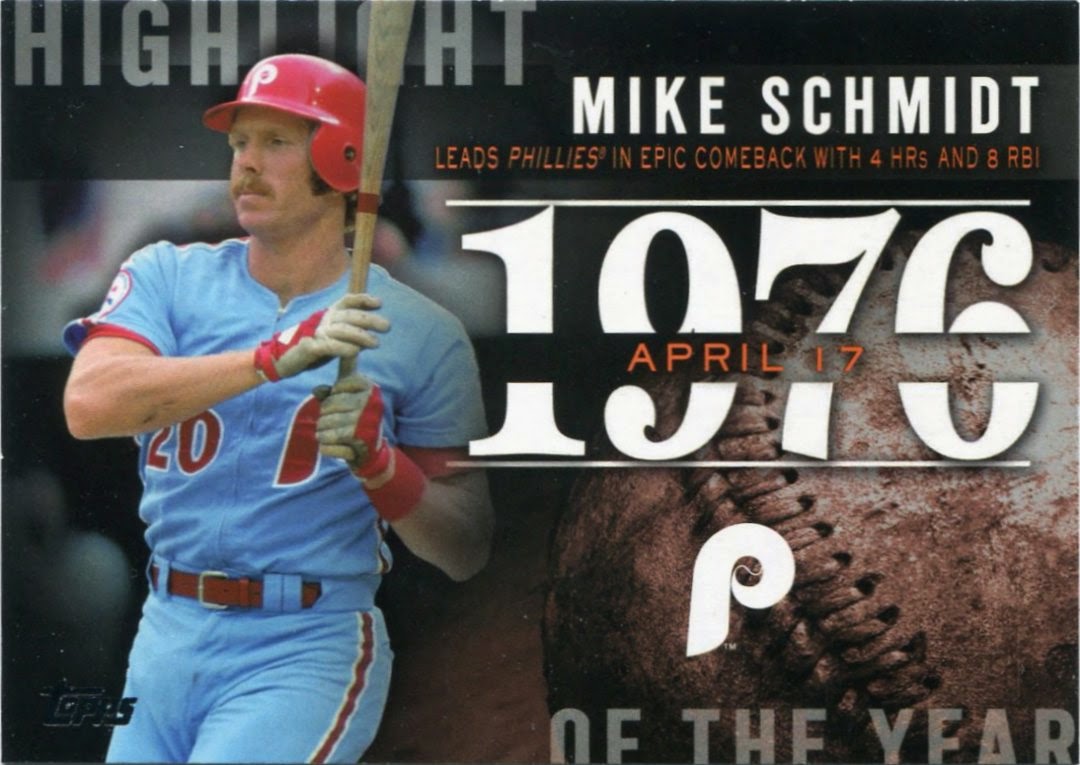 Jeff threw in a hearty box of cards along with the "Big Z" bobblehead, a box that likely would've set him back a few bucks at the post office.

I flipped through it while enjoying a tasty lunch at Portillo's with Jeff and my dad. One of the first things I found in the box was a decent-sized stack of 2015 Topps inserts.

Jeff told me that he basically included all the inserts he either didn't need or didn't send to other people. I guess that's fitting, given that I've basically crafted my collection around picking up the leftovers of other collectors.

Between dime boxes and Jeff's stack of cards, I'll forever be astounded my how many Mike Schmidts I've found in the leftovers. 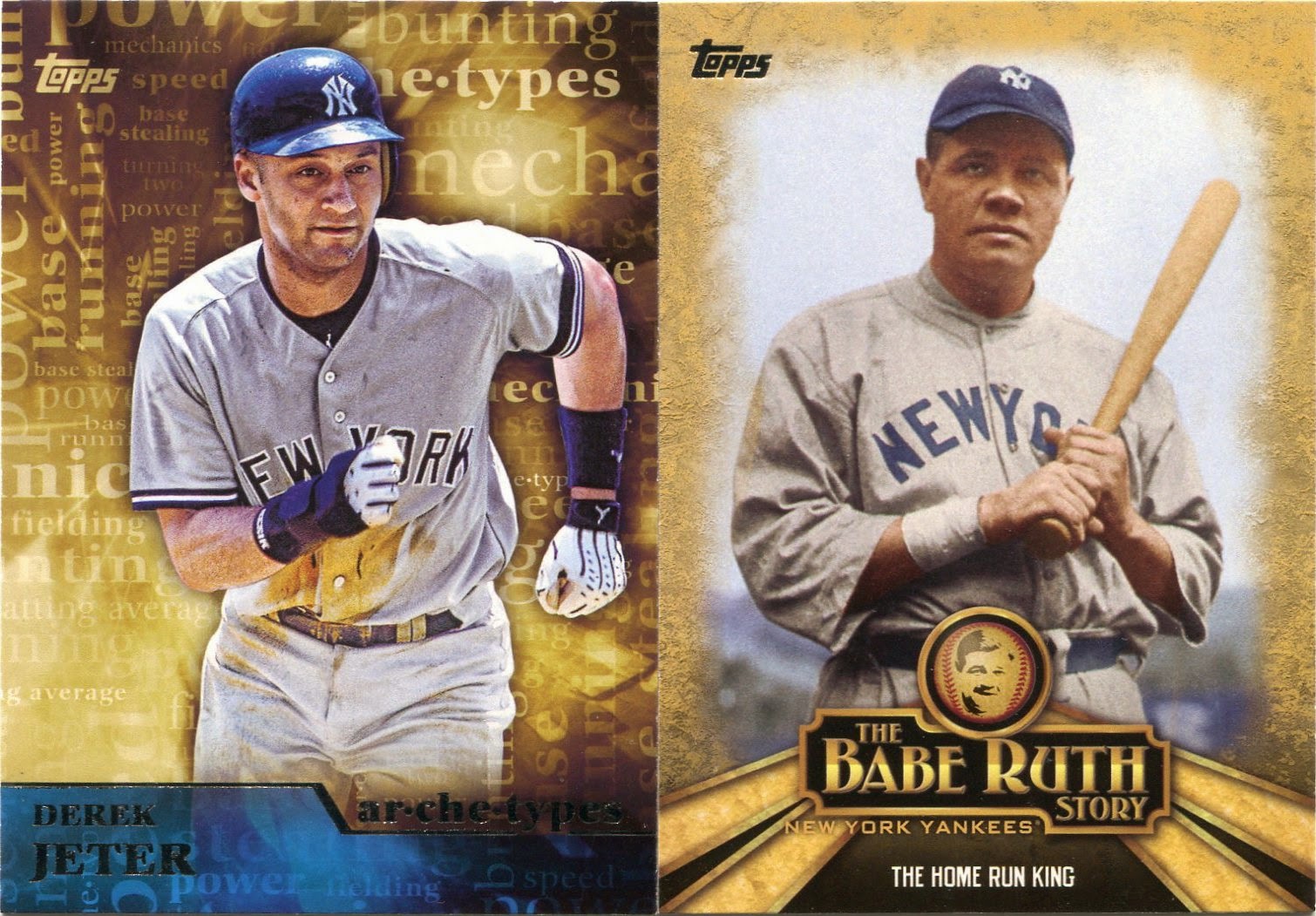 Despite the fact that neither of these are all that well-designed, both were needs.

The Ruth is especially nice since that particular insert series was exclusive to Wal-Mart retail packs.

Since I don't shop at Wally World, I doubt I would've ever seen one of those things had it not been for Jeff. 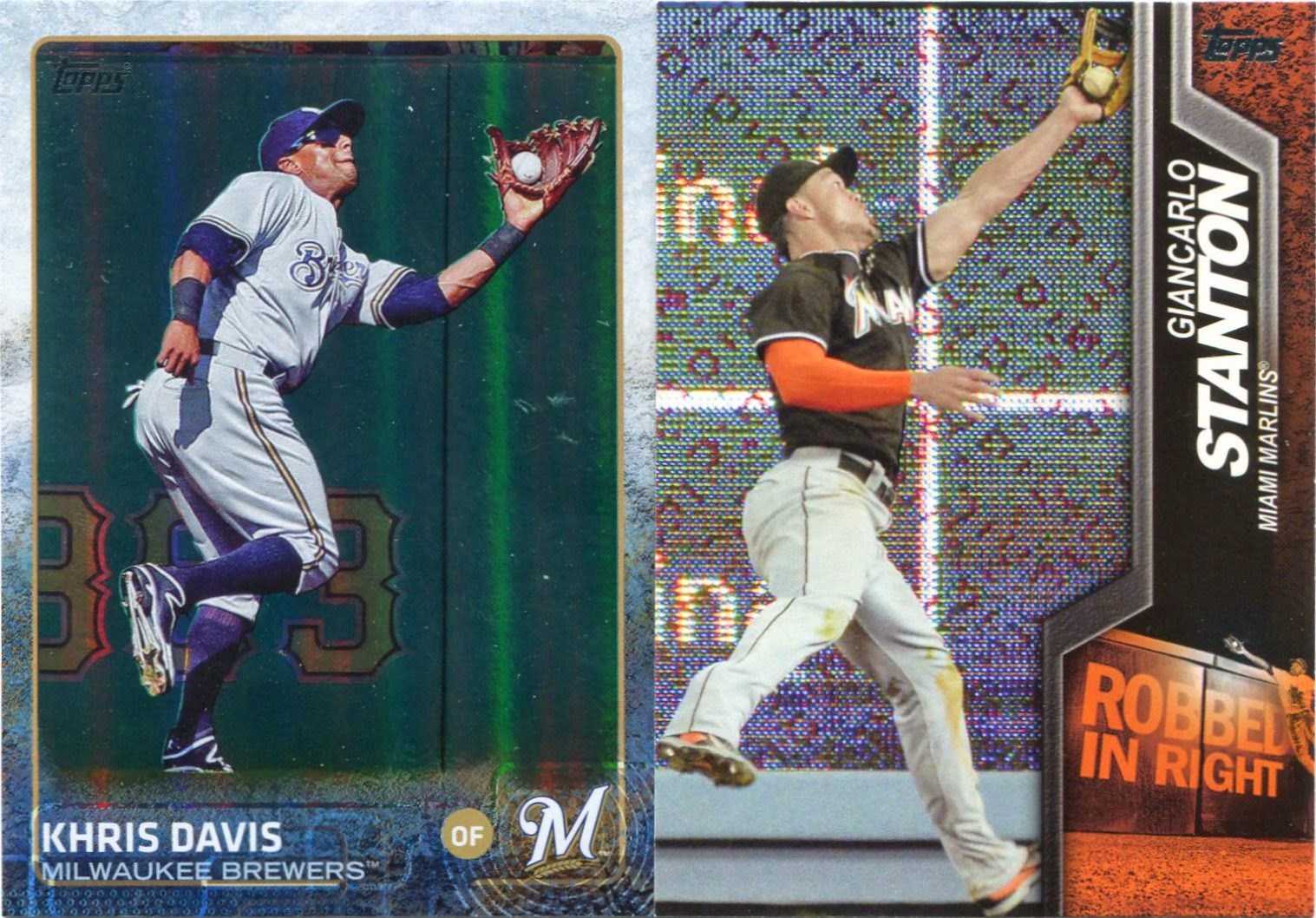 The Davis is a foil parallel (none of which seem to scan very well), and the Stanton is part of the "Robbed" insert series.

I speak from personal experience when I say that catching a ball with the heel of the glove like Stanton did there is quite, quite painful. 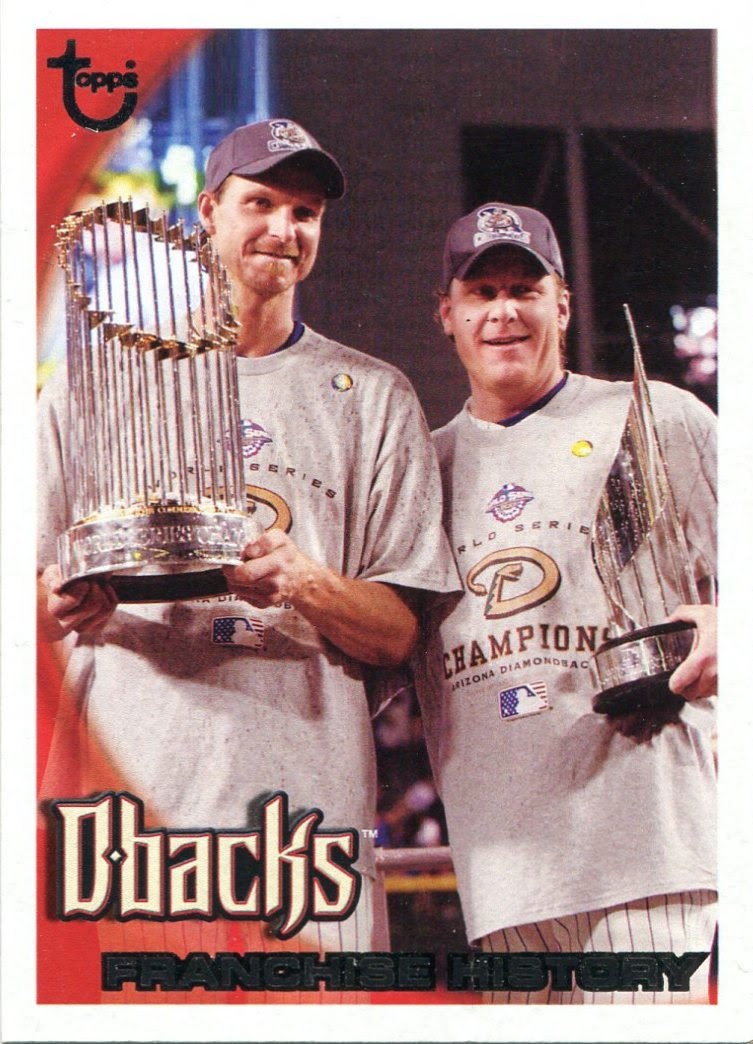 Jeff managed to hunt down a bunch of other mini-collection needs including this one, which almost slipped by me the first time around.

I have the base version of this Big Unit/Curt Schilling "award show" card, but, upon closer inspection, I found that this was actually a Target throwback parallel, as evidenced by the old-time Topps logo in the top-left. 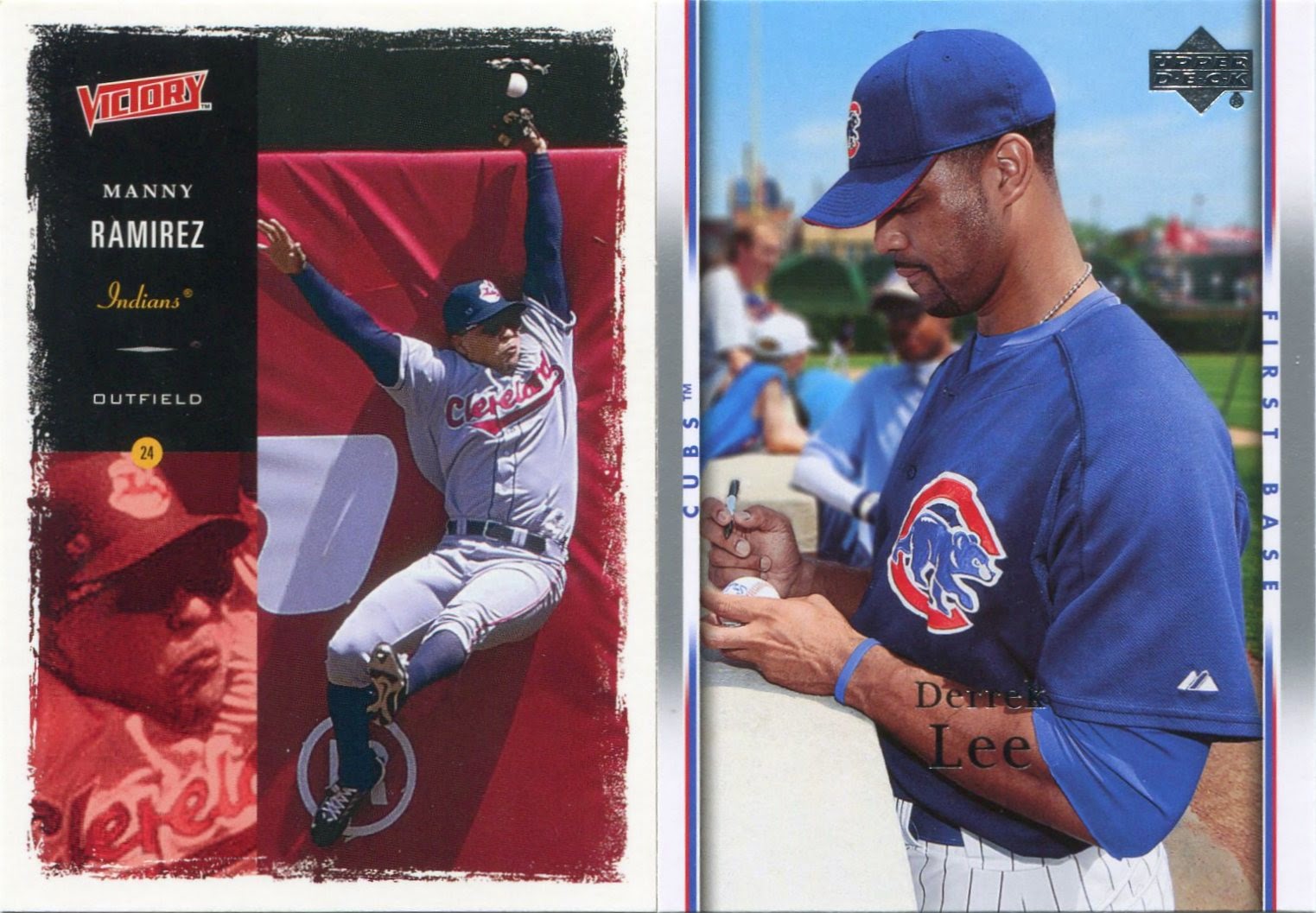 Here's another "at the wall" shot, coupled with Derrek Lee signing some autographs at Wrigley.

Try not to focus too much on Manny's lemon face there. 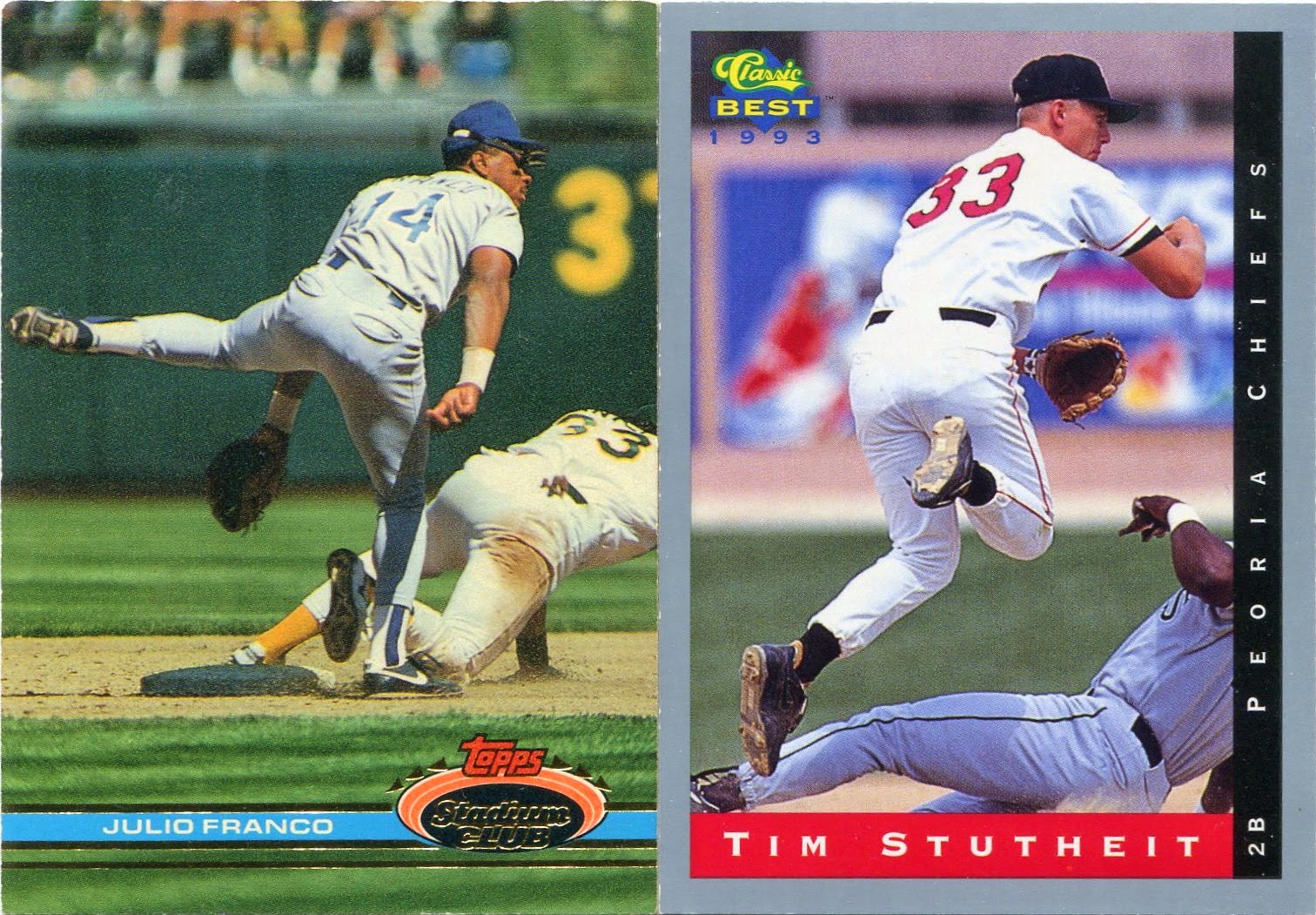 A couple guys turning two, both of the major and minor league variety. 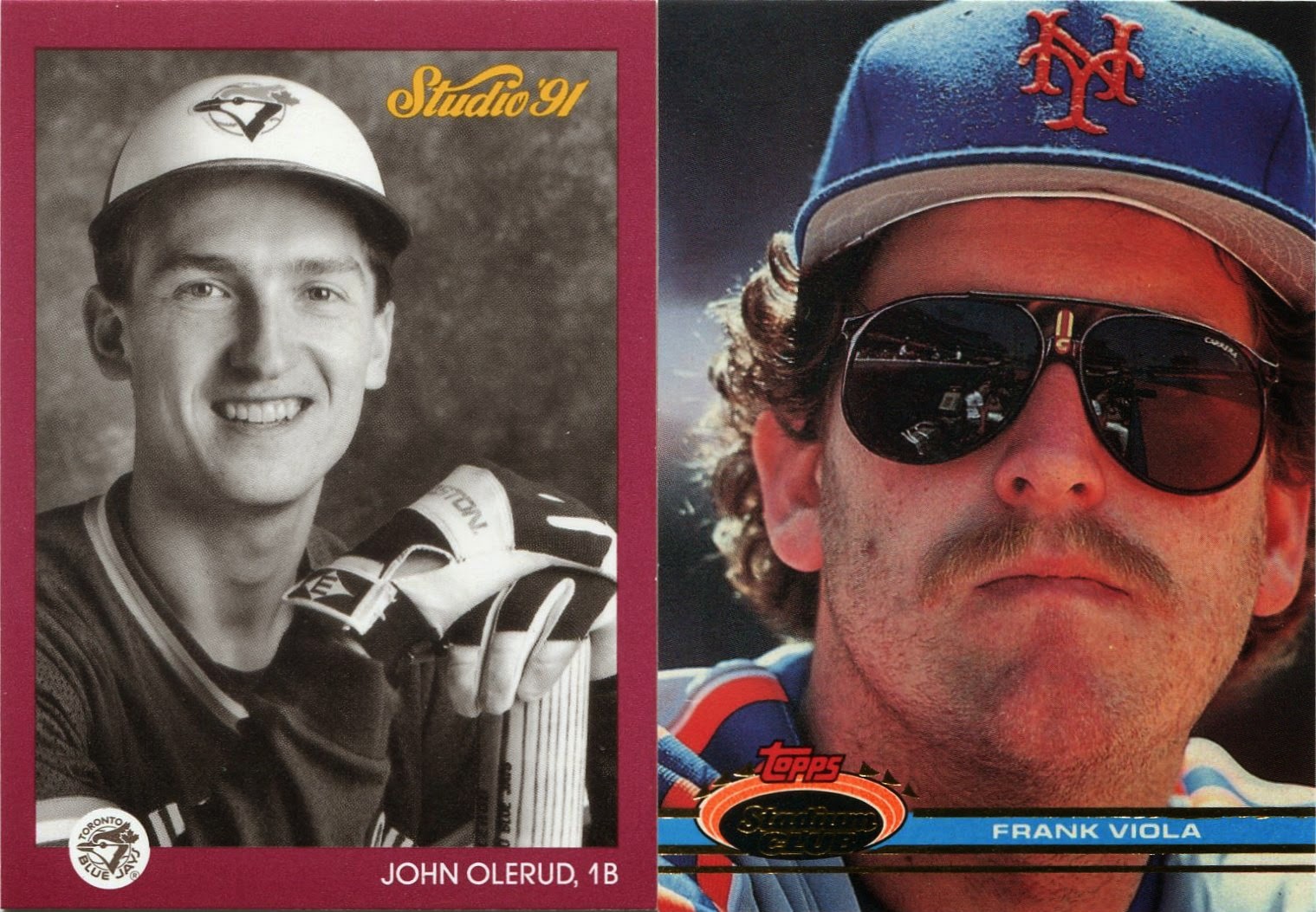 Now that we've gotten past 2015 Topps and mini-collections, it's time for phase three.

The sweet shades make that Viola an instant favorite. Well, that, and the fact that it makes me think of Wayne's World.

Like the Franco, I can't believe I didn't already have that Olerud. I'm a big fan of both him and '91 Studio. I'm glad Jeff was there to help supply what is a very beautiful card to my collection.

And, speaking of Mr. Olerud... 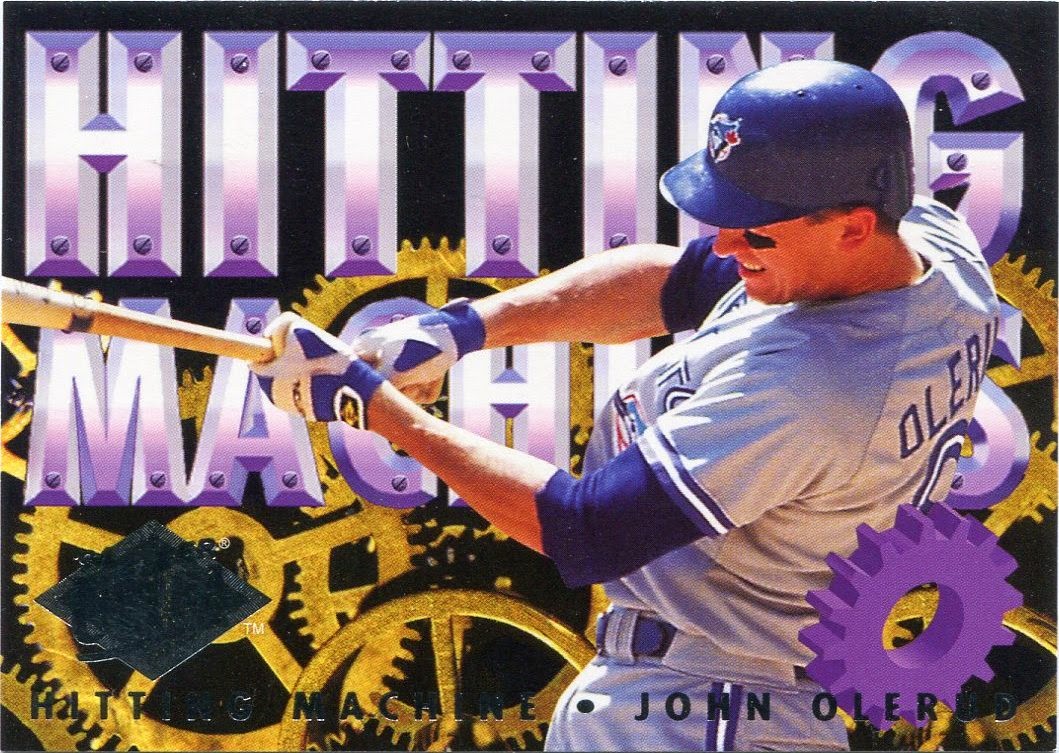 ...how's that for a loud insert design?

Which lends itself to yet another segue... 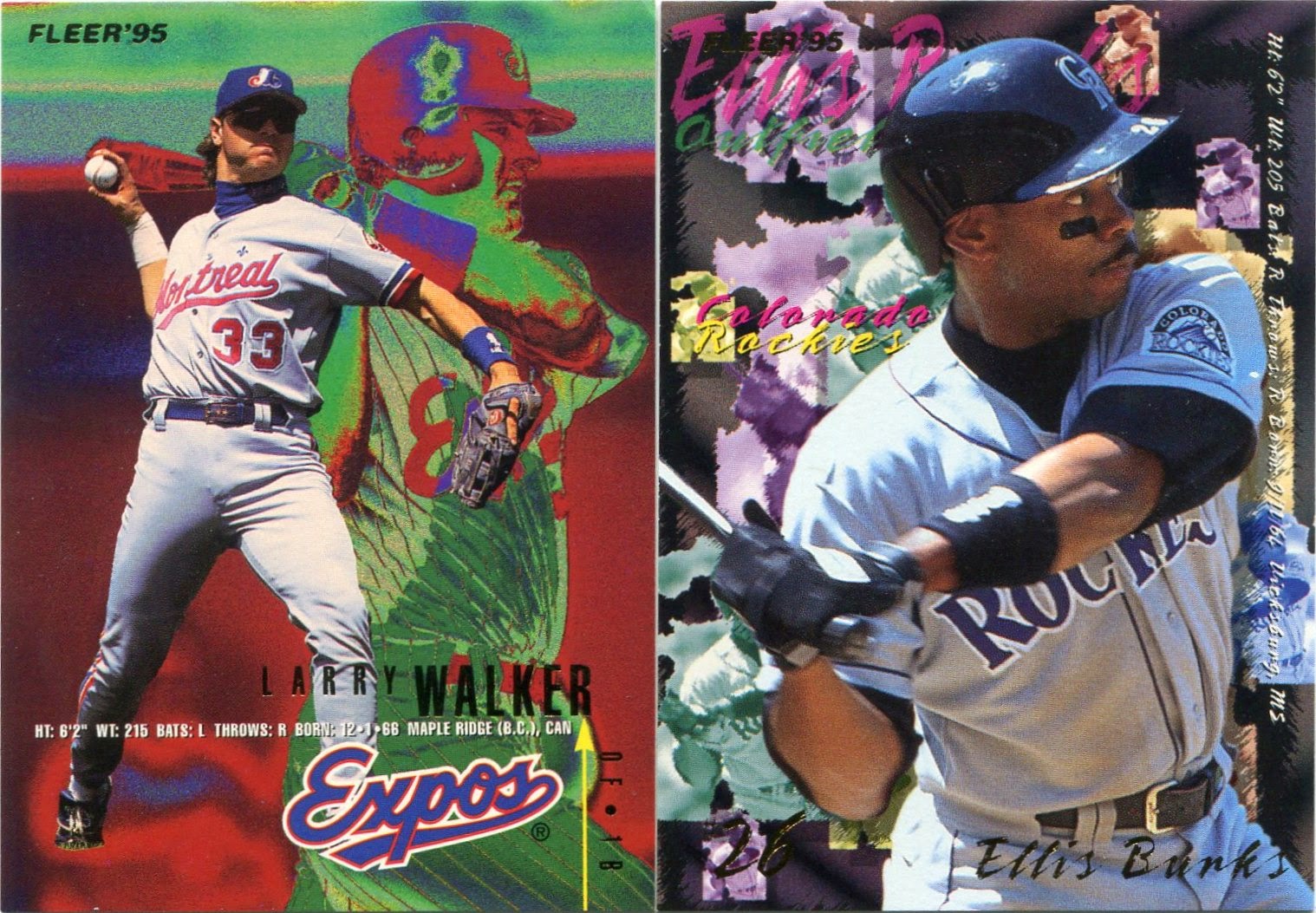 I'll make you come around on this set yet, Jeff. Same goes for all the rest of you '95 Fleer naysayers out there.

Which, now that I think of it, is almost everyone except myself. 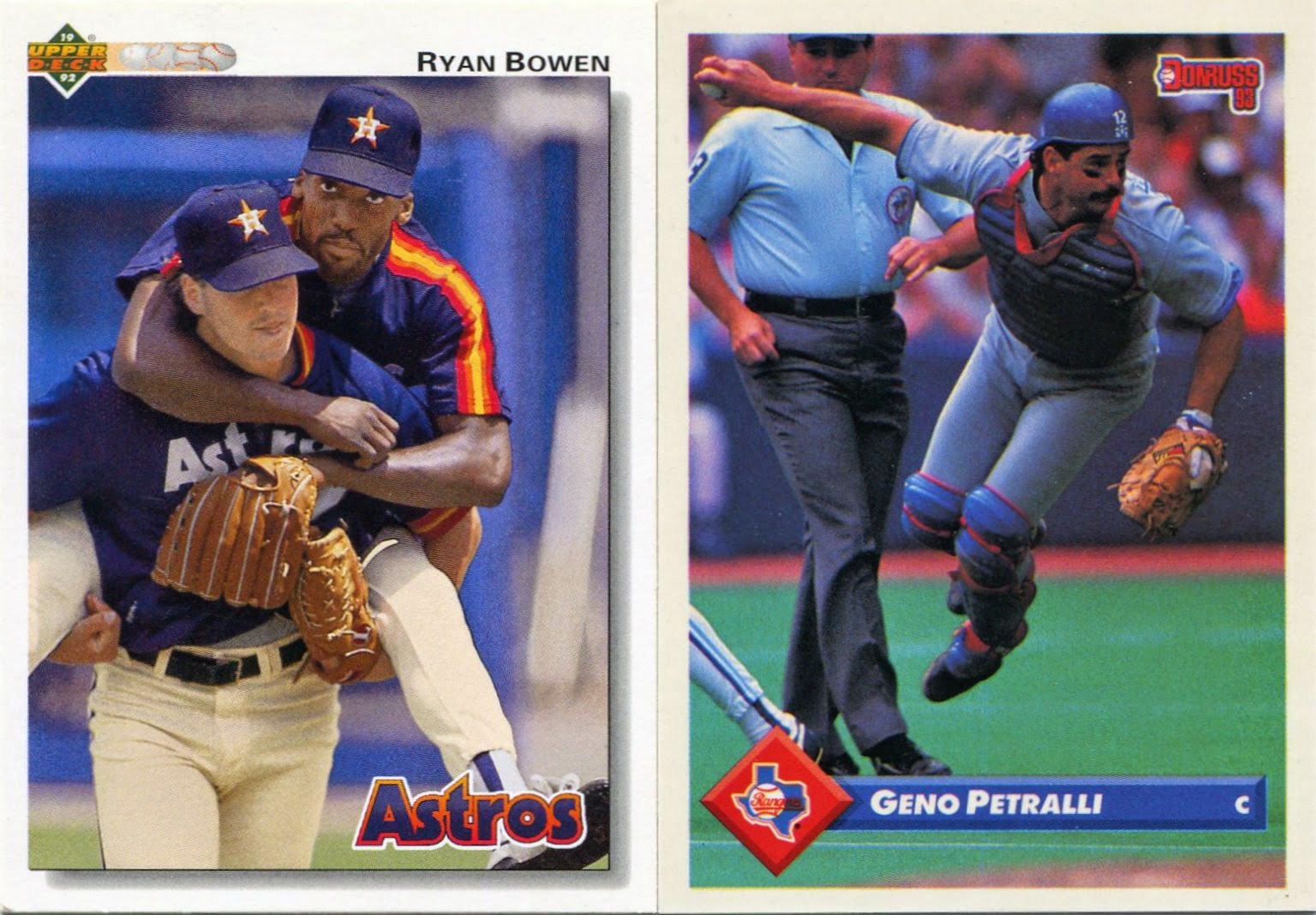 Who says cards from the early '90s were junk?

It's hard not to smile after seeing these two comic pieces of cardboard. 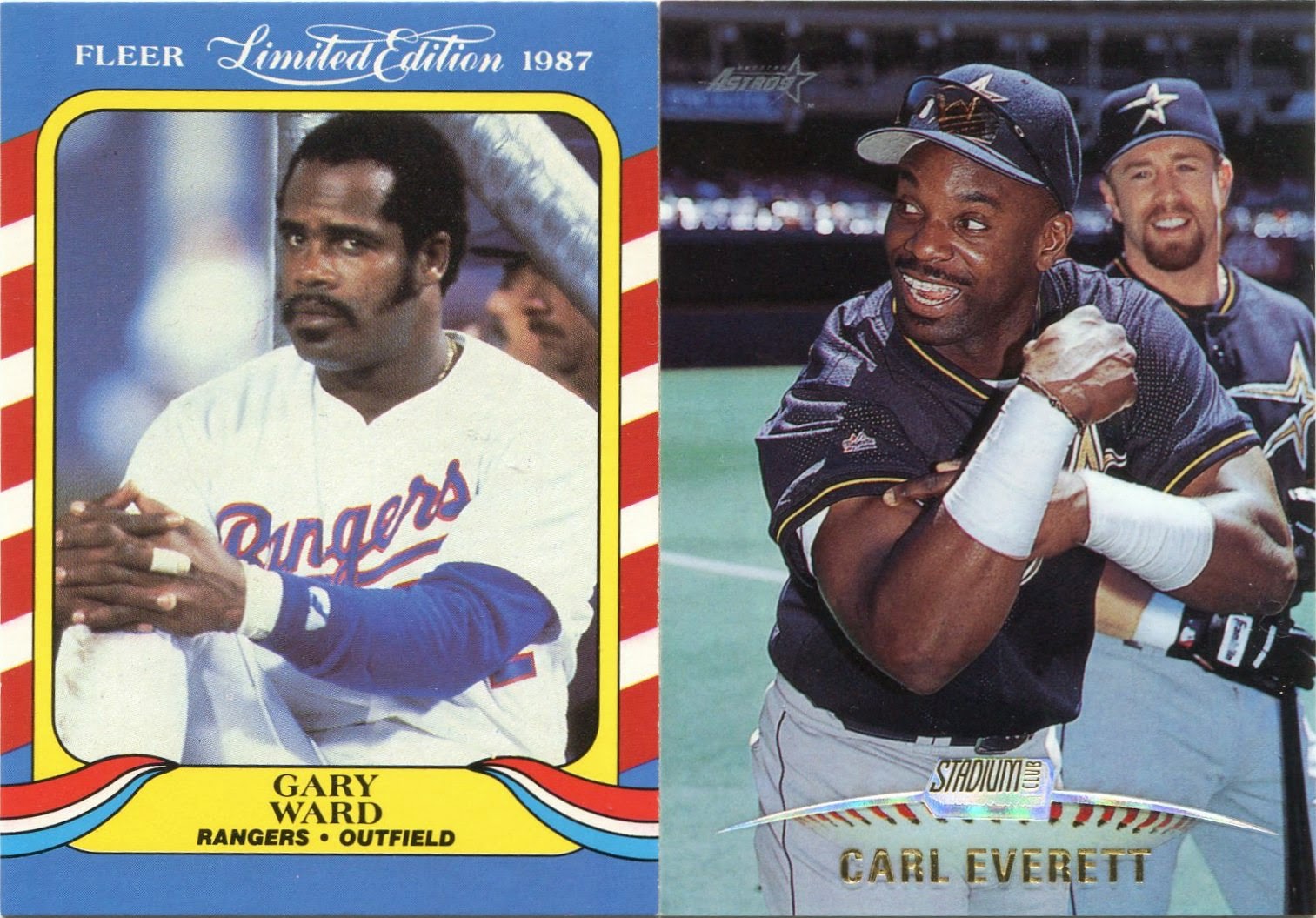 Something about the look Gary Ward's face made both Jeff and I crack up.

I can't put my finger on exactly what it is. 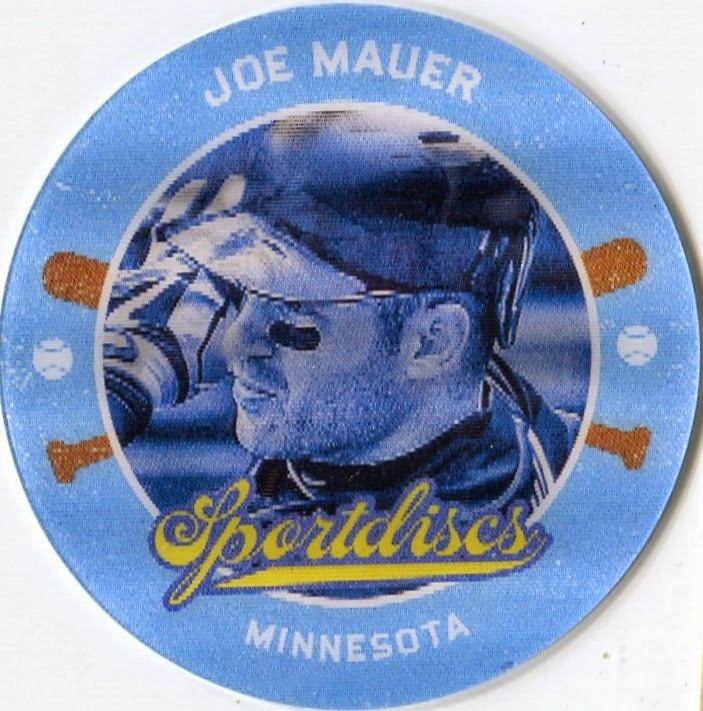 This card (if you can call it that) did the impossible.

It made me admit that at least one bright spot came out of 2014 Donruss. This 3-D Mauer insert is pretty darn cool, cool enough for me to not even notice the lack of logos.

A blind squirrel finds a nut every once in a while, I guess. 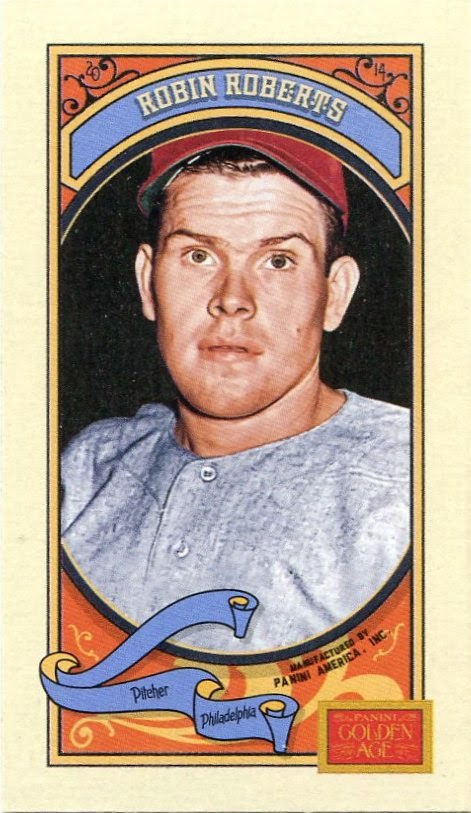 In a huge box filled with stacks and stacks of cardboard, I guess it's a bit ironic that a mini might have been my favorite card of the lot.

While Robin Roberts is among my favorite old-time pitchers, he hasn't been included in very many recent sets. Panini gave Robin the spotlight, and this nifty Golden Age mini allowed me to bolster a player collection that hasn't seen many additions as of late.

As you can see, this box touched on nearly every corner of my collection. And, when we met up in February, I supplied Jeff with a huge box of cards I'd been saving up for him, a box which both added a bunch of new cards to his archives (I hope) and finally cleared some space in my room/man cave.

And it didn't cost either of us a cent.

If only every blogger lived within driving distance of me.
Posted by Nick at 6:10 PM

That Geno Petralli card was one of my favorites as a kid. To this day I have no idea who Geno Petralli was or what was going on in that card, but there's a copy in my Rangers binder nonetheless.

Your box was a monster to dig through. Luckily, so much goodness came from it.

I didn't even realize that Panini brought back those sports discs, I remember those in 2013 Panini... Awesome package!

That's what I call a super swap-meet!

I can't stand going to the post office. Between the amount they charge to ship packages and the horrible customer service, I'm lucky if I go there once a month.

As for in person swaps... I've only met one fellow blogger (Brady over @ Yadier Molina Baseball Cards) and we saved on shipping and exchanged cards. Wish more bloggers lived in my area.