The day of two shows, Pt. 2: Catching the bug 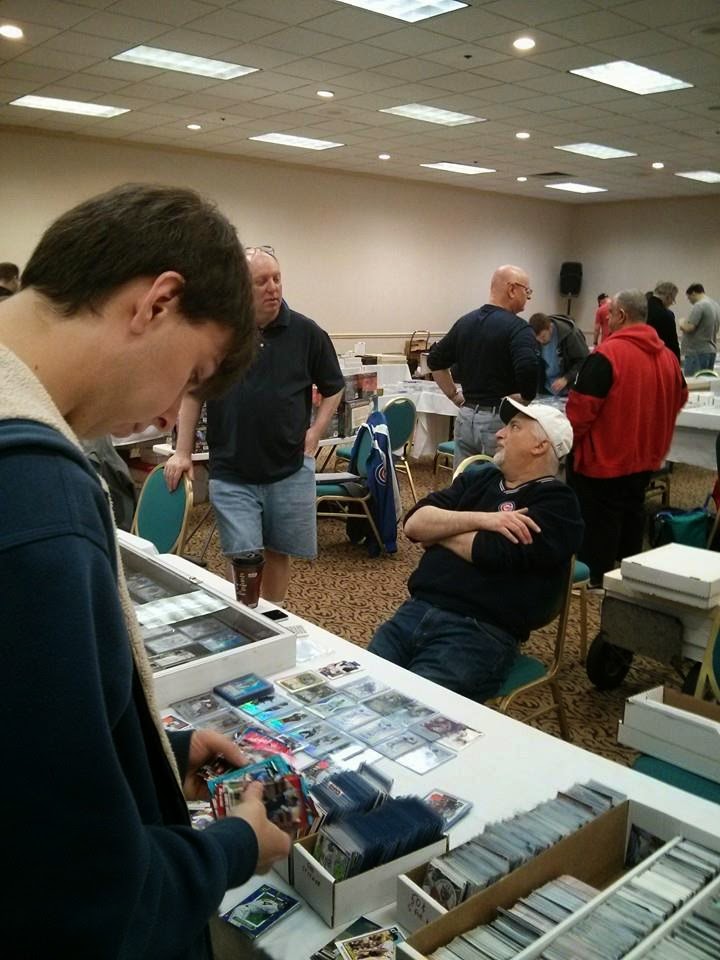 In case you missed the first post on the subject, I attended two hotel card shows this past Sunday.

The second was an unplanned trip, but I'd scheduled to attend the first one about a month ago. Dad and I made our way to the first show bright and early. Since it was my first time attending this particular gathering, I wasn't quite sure what to expect. But, as I made my way into the room, I was pleasantly surprised.

I'd say there were around 15 to 20 vendors set up, and the very first table I stopped at had a couple discount boxes. Dad snapped this "action" shot of me at that first table as I made my way through the goldmines. (As the vendors behind the table complained about not making any money, no doubt.)

After all was said and done, I did quite a bit of damage.

So much, in fact, that I'll have to split the finds from this first show into two separate posts. 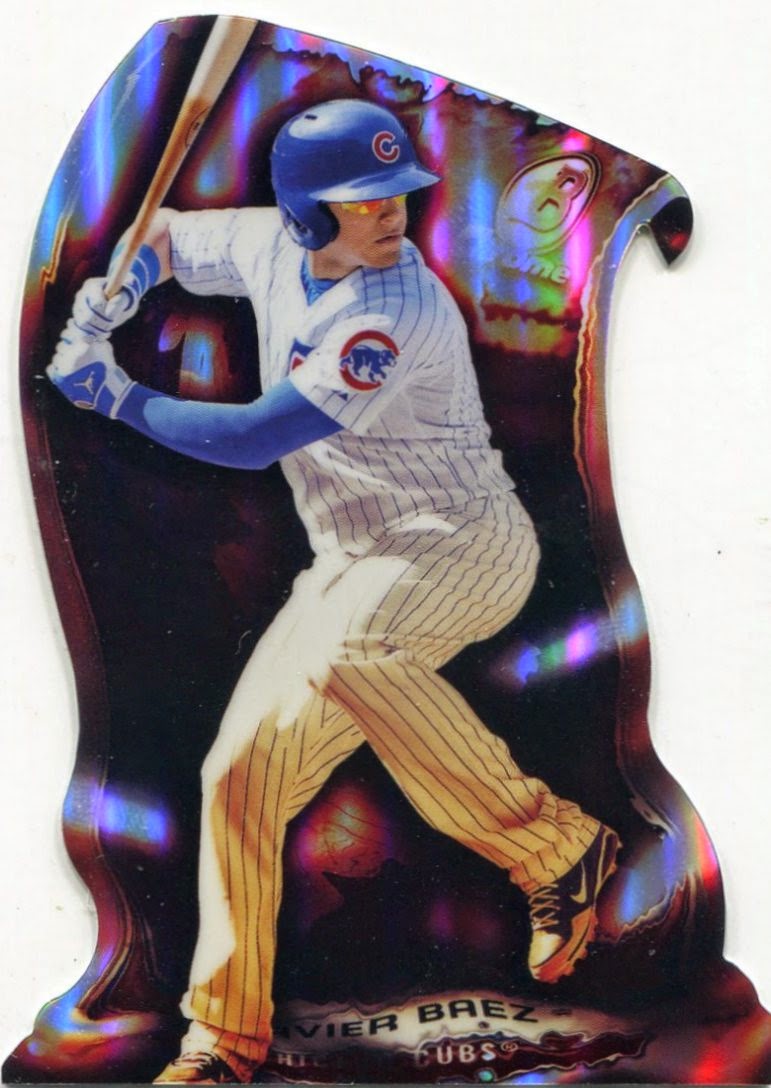 We might as well start with the most expensive card I bought all day.

I'm not a prospector, by any means, but I'd been itching to get my hands on one of these melting Bowman Chrome rookie inserts. Sure, they might be a little gimmicky, but that doesn't mean they can't still be cool. Does it?

When I saw this Javier Baez sprawled out on a white table in a penny sleeve and toploader (because it's a high-dollar card, of course), I figured I'd at least get the vendor to quote me a price.

And that's how, for a whole three bucks, I made what would prove to be my priciest pickup of the day. 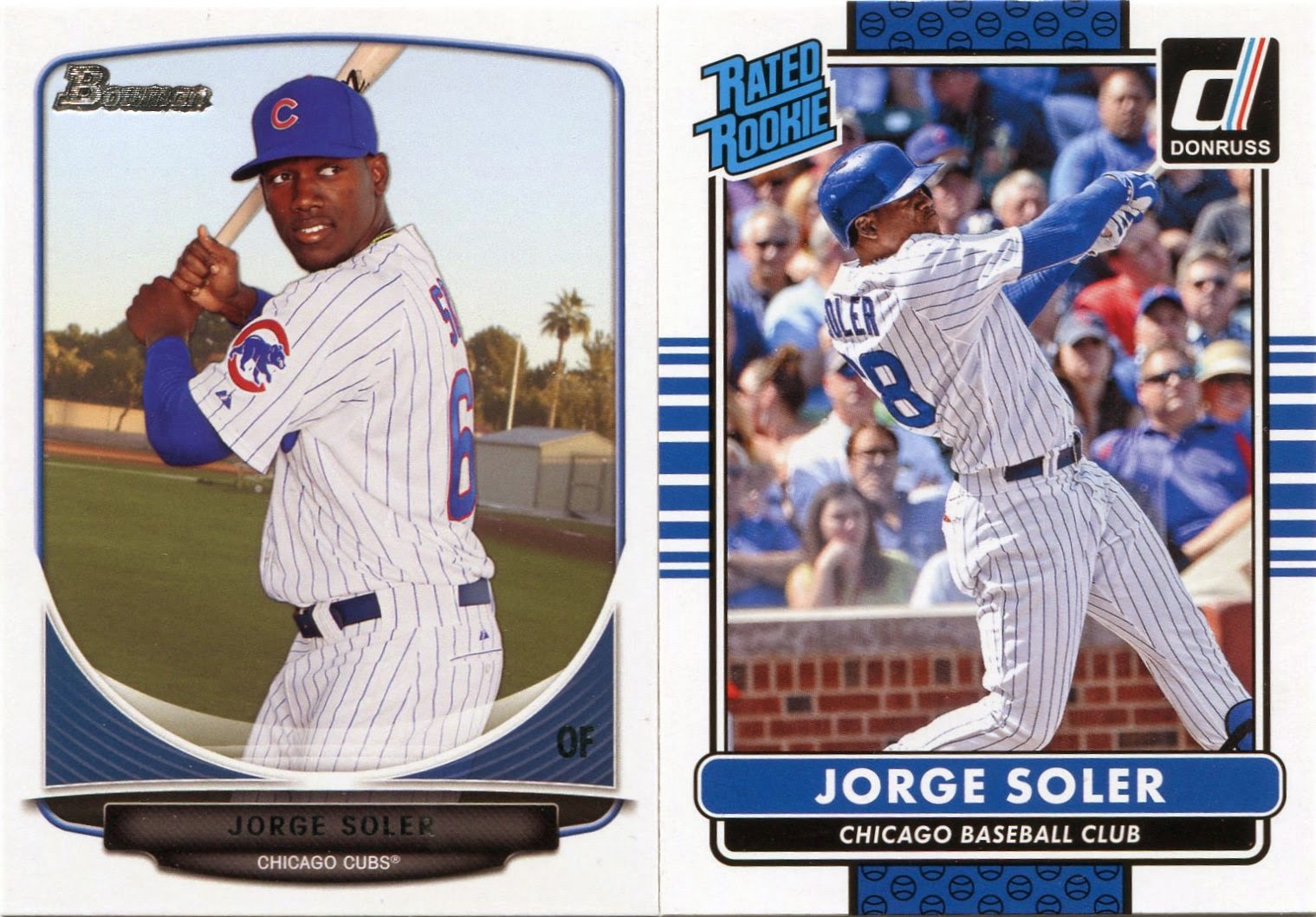 Baez might be a solid player one day, but I'm way more excited about this Soler kid.

I can call him a "kid" because I'm six days older than he is. And although I don't think I have to say this it at this point...no, I didn't buy these to "flip" down the road. I'm just trying to get my Soler collection off the ground. 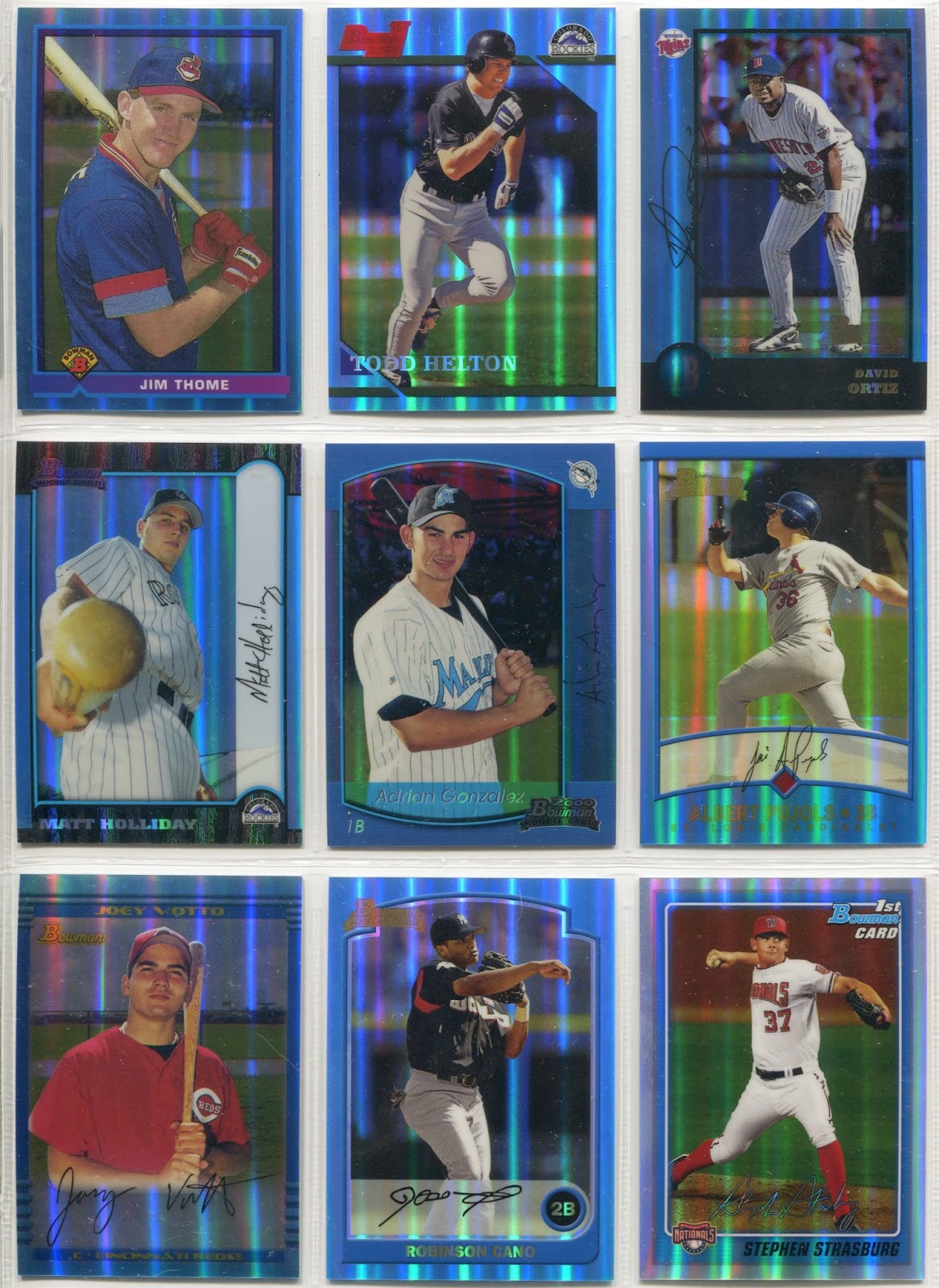 My God, Nick, what's with all the prospects?

Have you suddenly become that guy? The cash-crazed prospector? The investment guru?

No. No. No. These are just reprints. Reprints I found in a dime box, mind you. Please, don't worry.

I won't cross over to the dark side of prospecting. 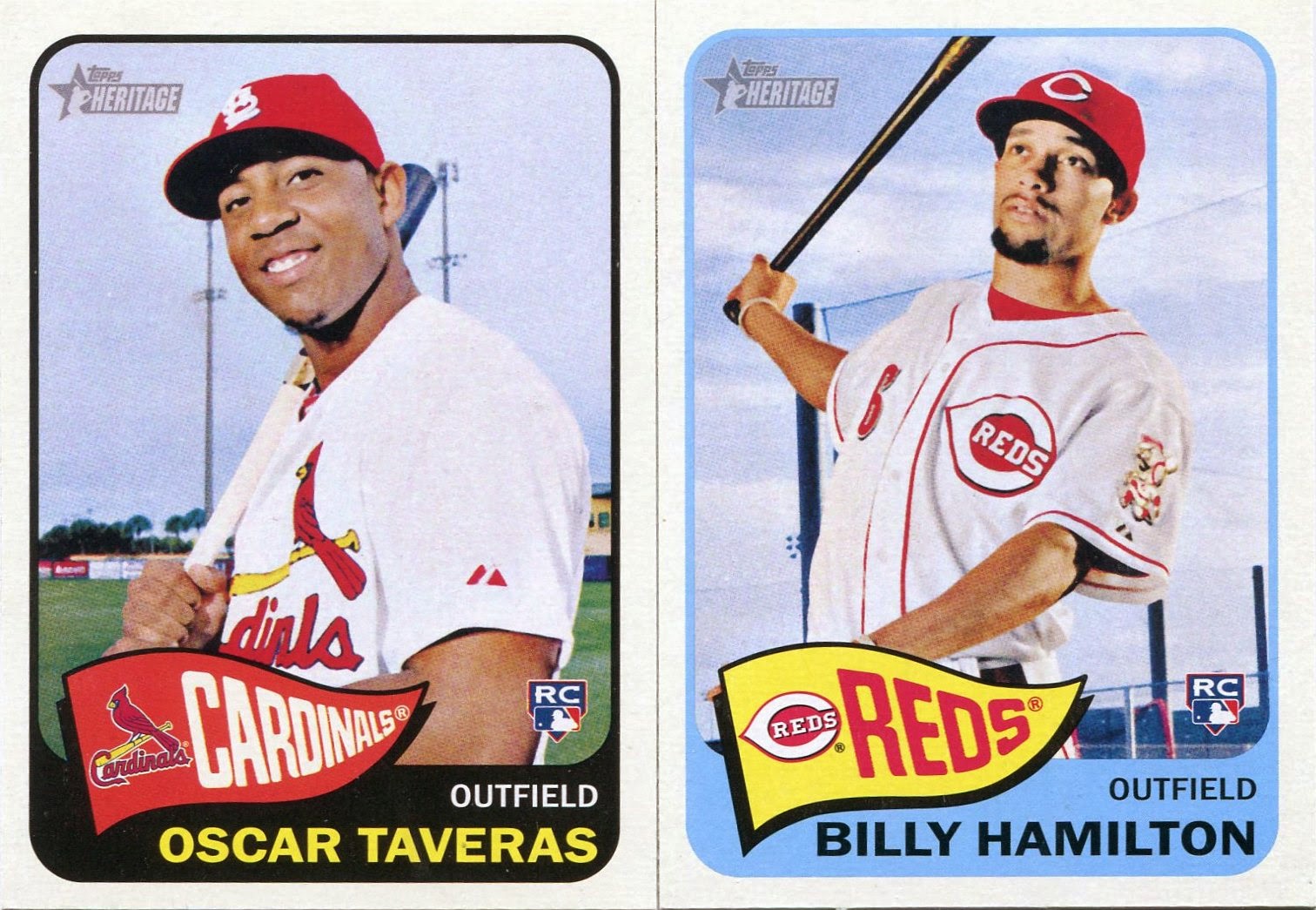 And yet here are more rookie cards.

I actually forked over a buck a piece for these two. Now, I'm not sure I would've made that deal if these were standard Heritage base cards. But, considering the fact that these are actually High Numbers, the price was right for me.

They're actually the first of the recent boxed-set High Numbers I've ever bought. 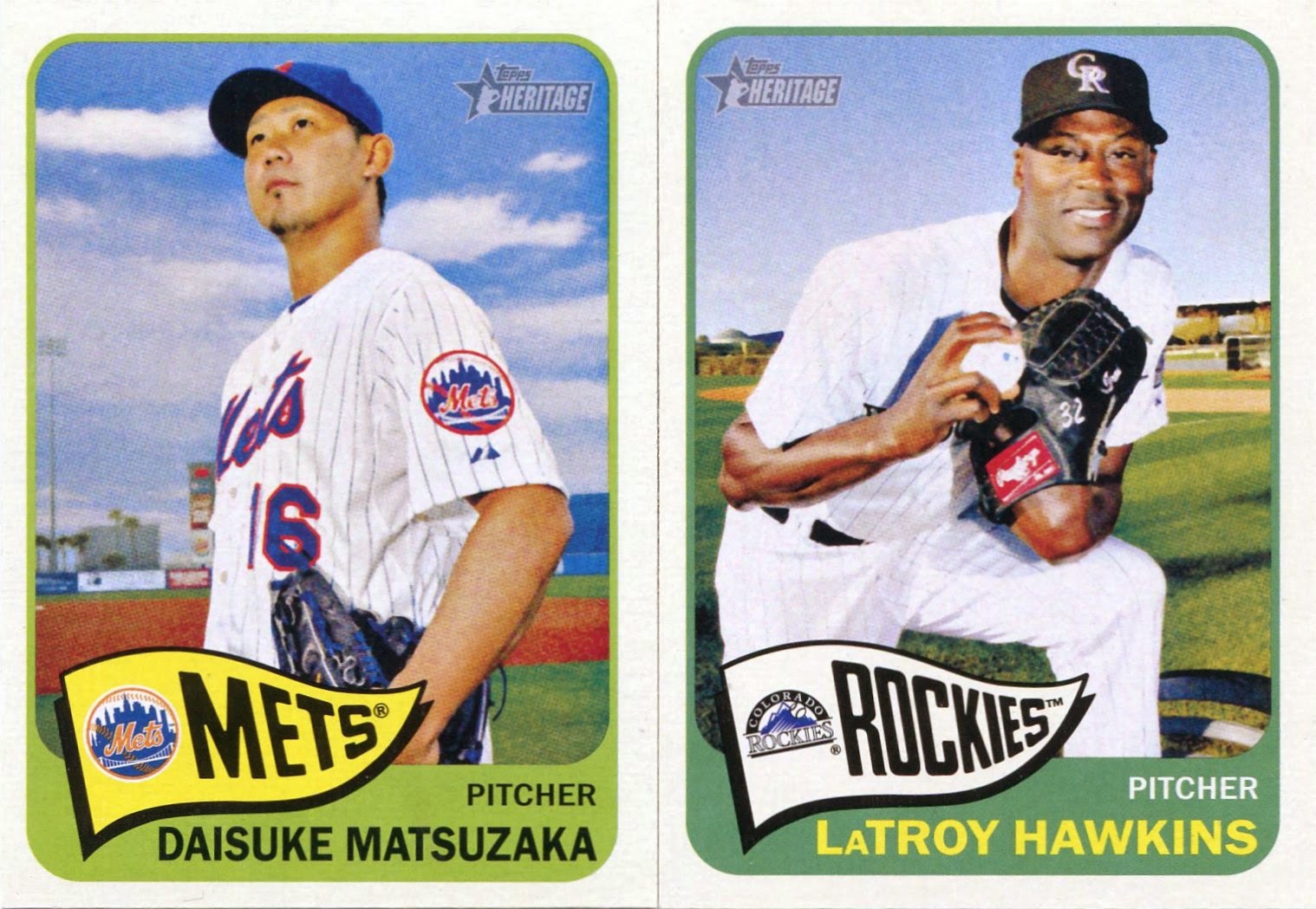 And I didn't have to wait long to add a couple more to my collection.

If the rookies were a dollar, take a guess at how much these cost me. I'll wait.

If you guessed a nickel, you're correct. Yes, a nickel. These 100-card sets went for $100 a pop, so I'm not exactly sure where the profit margin is there. But I'm sure as heck not complaining. I bought a trio for myself (not pictured: Scott Kazmir) and a few others for my fellow bloggers.

Now, if only Topps would price them at a nickel a piece... 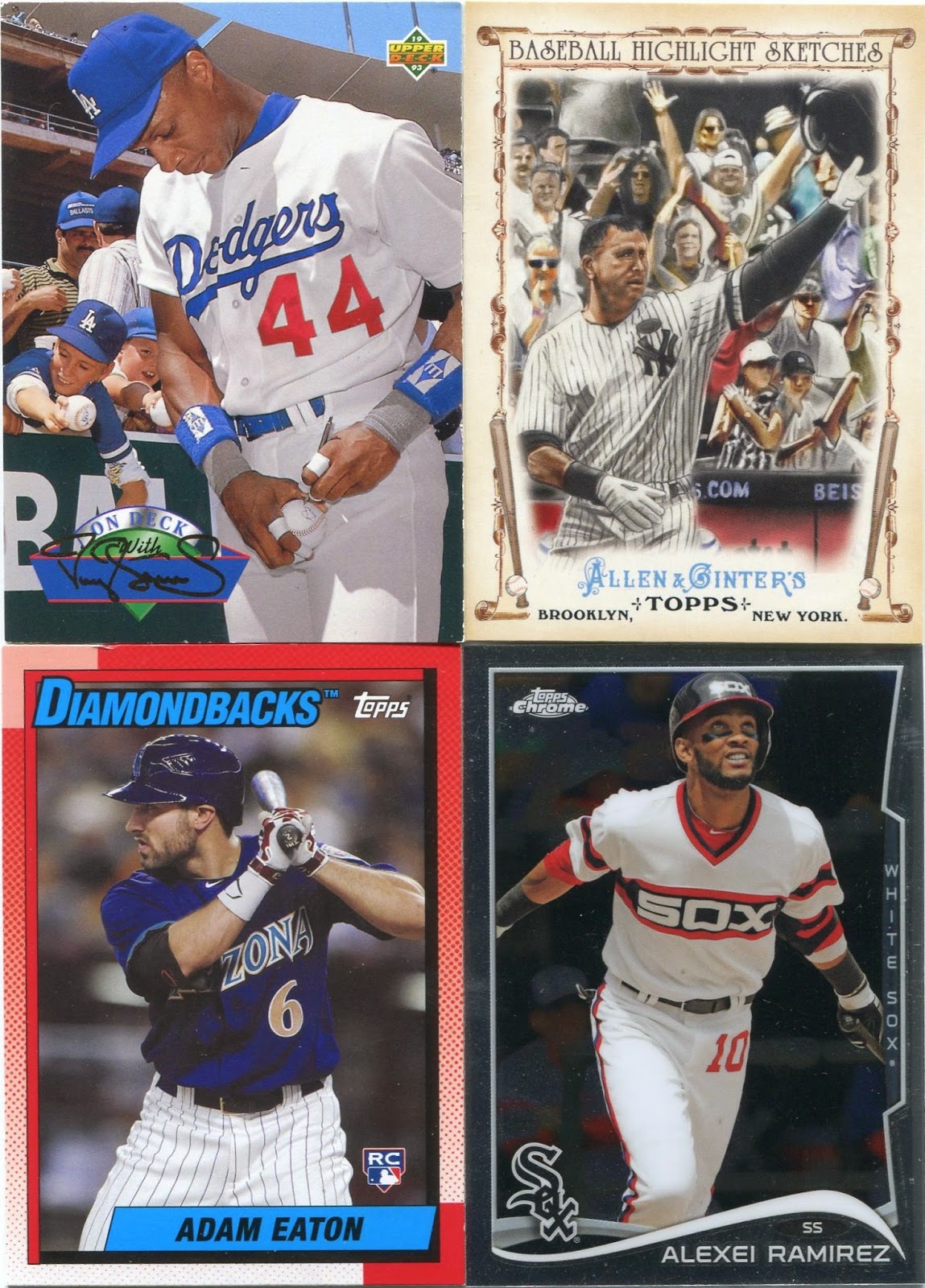 I didn't dig up a ton of dime box mini-collection hits, but, at the same time, I didn't get completely shut out.

And, yes, I'll buy a card of A-Rod if it fits into one of my themes.

That's the hold mini-collections have over me. 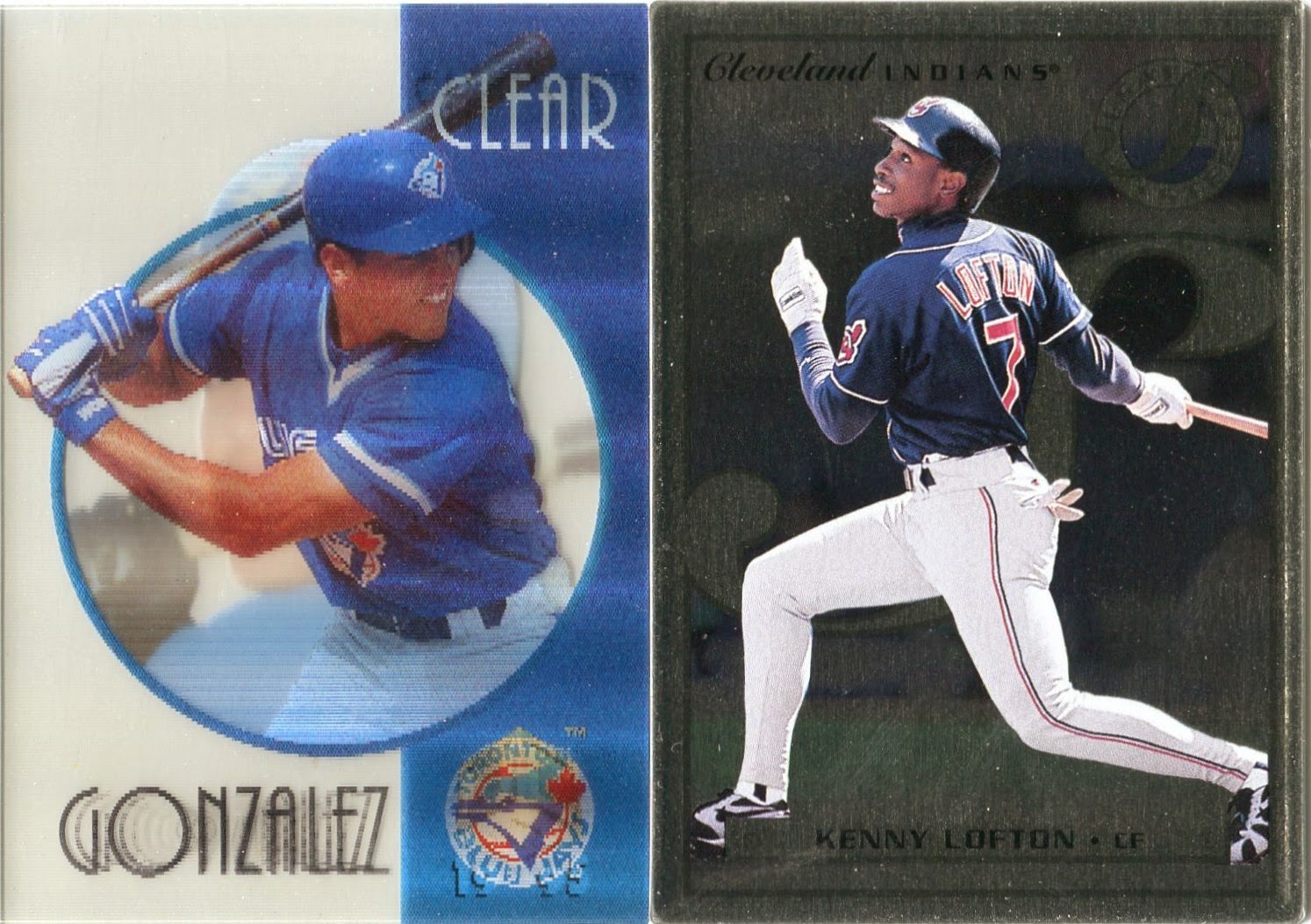 As you'll soon see, a lot of what I found at this show was centered around more recent sets.

But I did manage to find a few sweet randoms that put a smile on my face. The Gonzalez is one of those seemingly oxymoronic clear 3-D cards. I'm still not exactly sure what kind of sorcery went into producing those.

The Lofton is from the Leaf Steel brand, a brand which is responsible for producing the heaviest cards in history.

Anyone who's ever held one of them knows what I'm talking about. 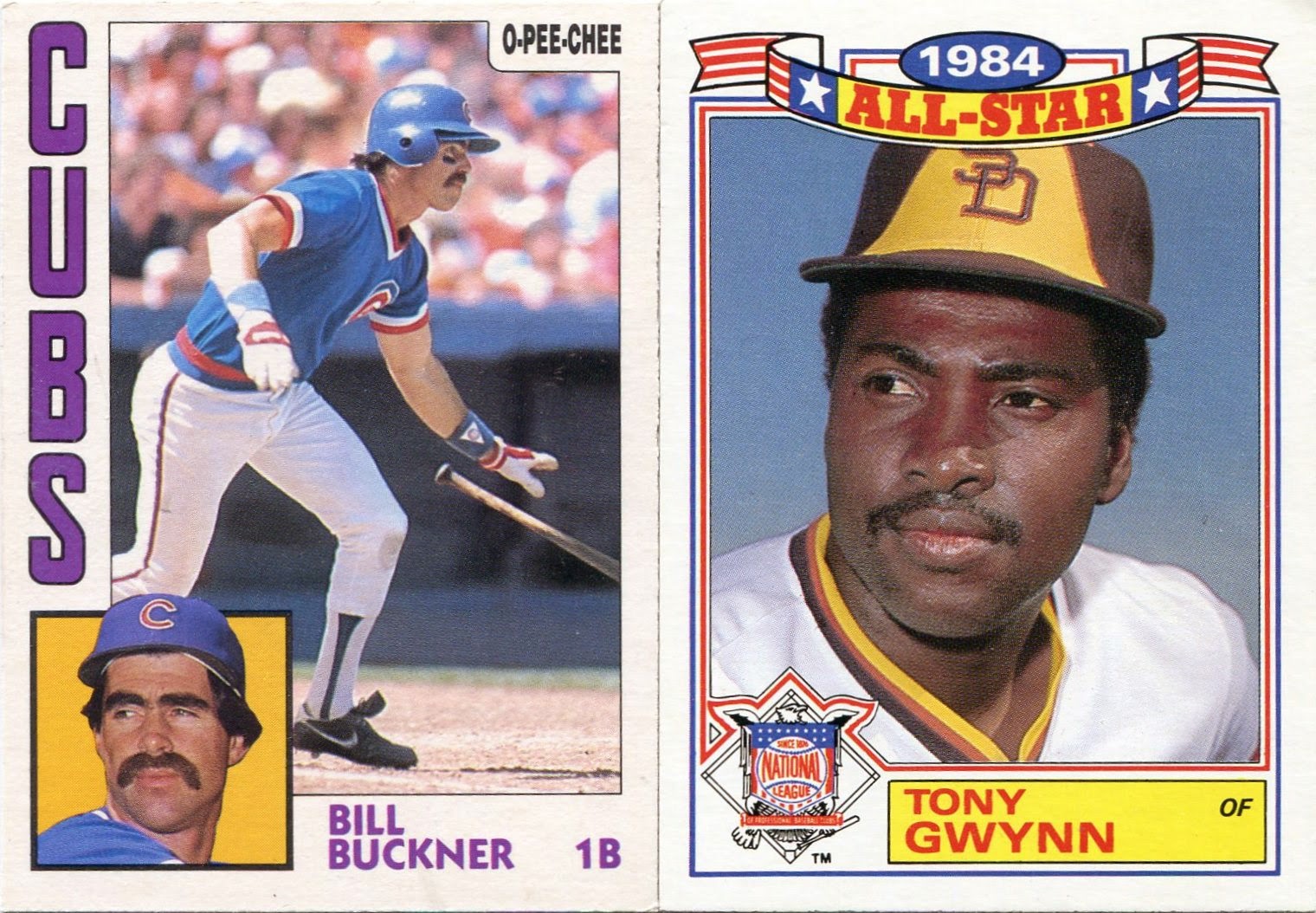 Gems of the '80s were few and far between, but I salvaged a few good ones here.

Looking back, I guess the Buckner foreshadowed the OPC craze I went through at the second show. 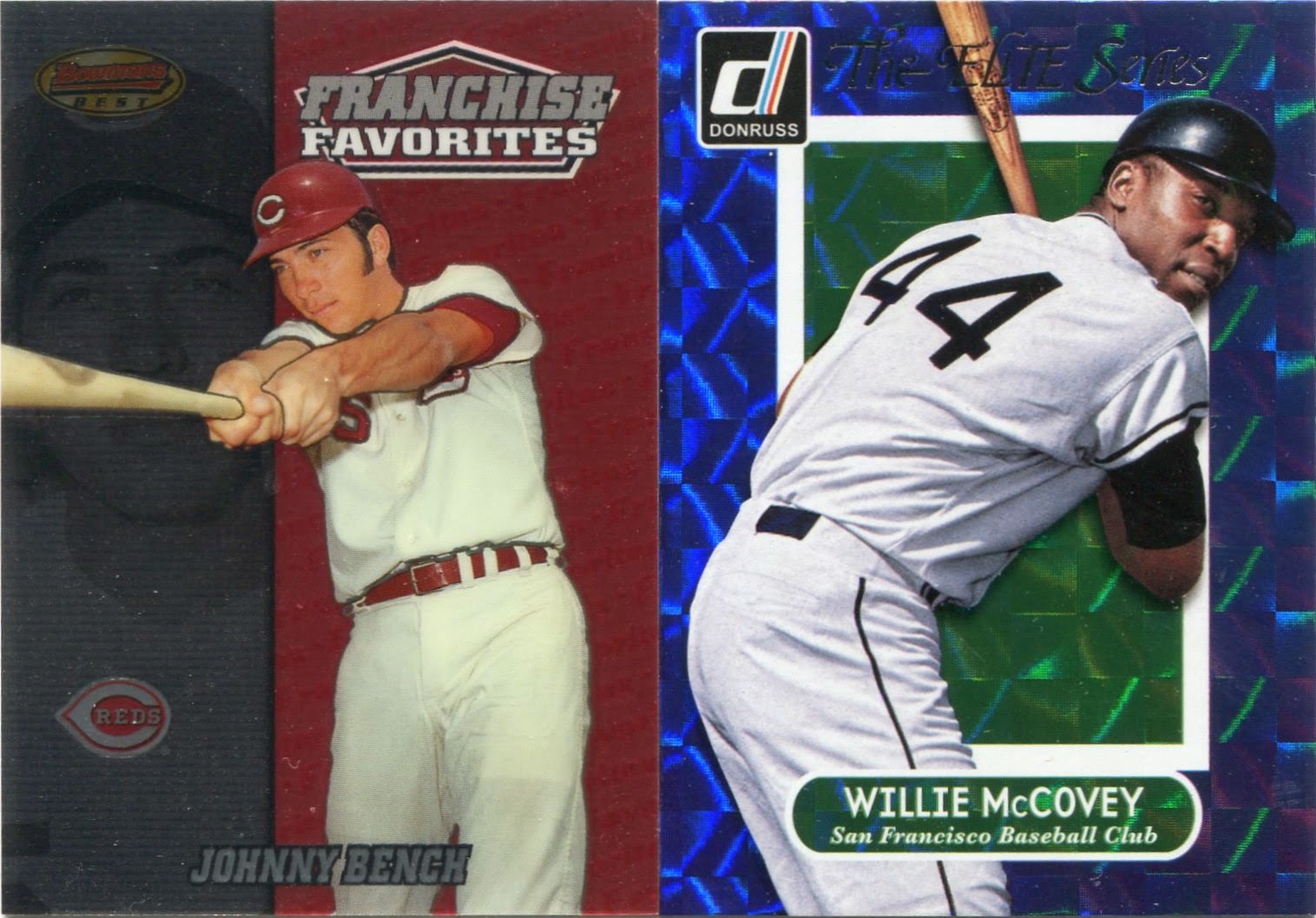 Despite my love for base cards, inserts can indeed win me over.

I somehow found that beautiful Bench in a dime box, while the McCovey was nestled in a 5/$2 bin (the same one that produced the Donruss Soler) at the first table of the day.

At this point, I was starting to catch the insert bug. 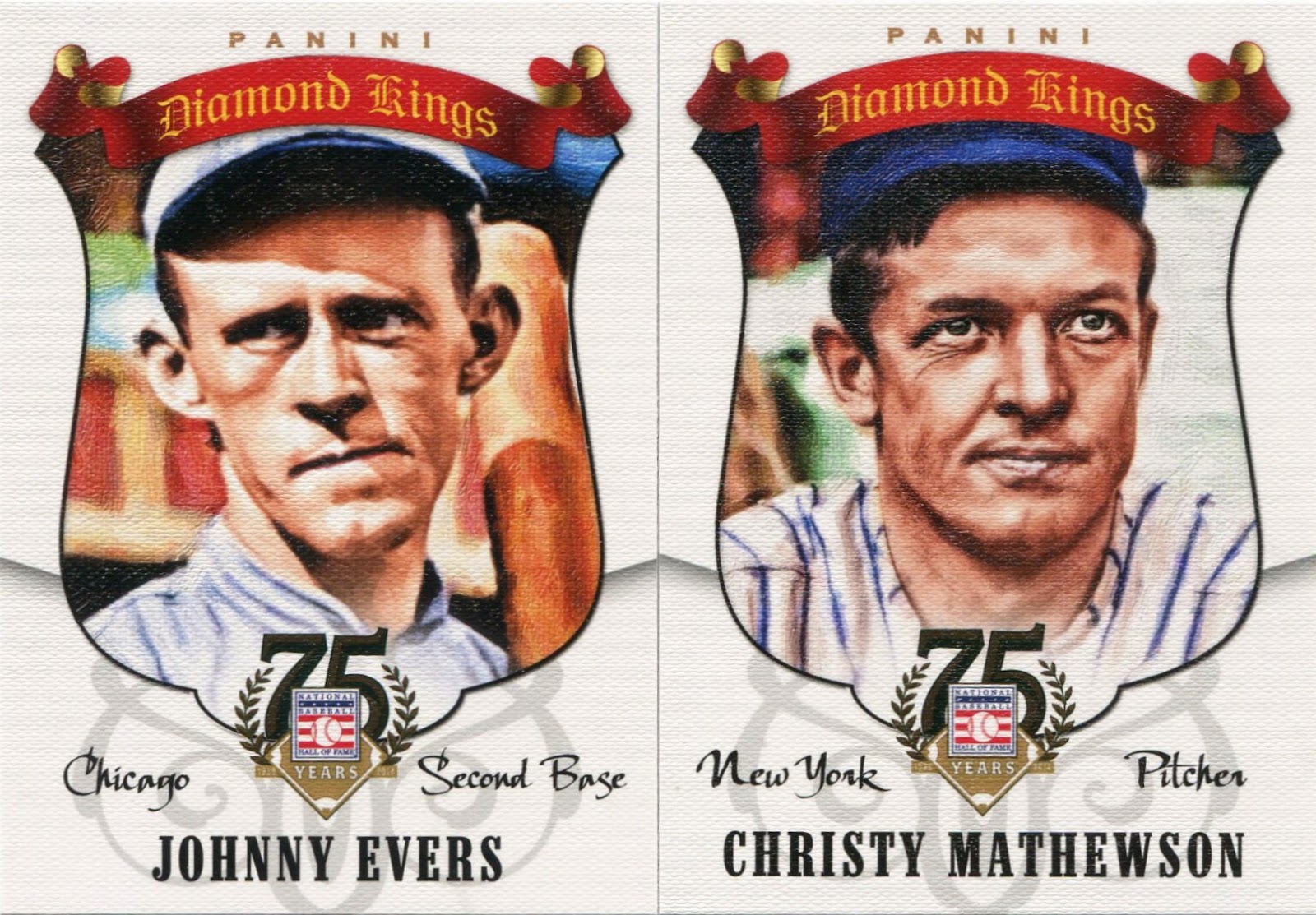 The symptoms started becoming more clear as the show went on.

There were inserts all over the place. It felt like things were starting to come to a head when I added these to my purchase pile, mine for a buck a piece.

I'm still mad at the Hall of Fame 75th Anniversary brand for replacing my beloved Cooperstown, but I couldn't resist picking up these two. They're printed on canvas-like card stock and feel like legitimate pieces of art.

The insert bug was spreading, getting stronger and stronger. 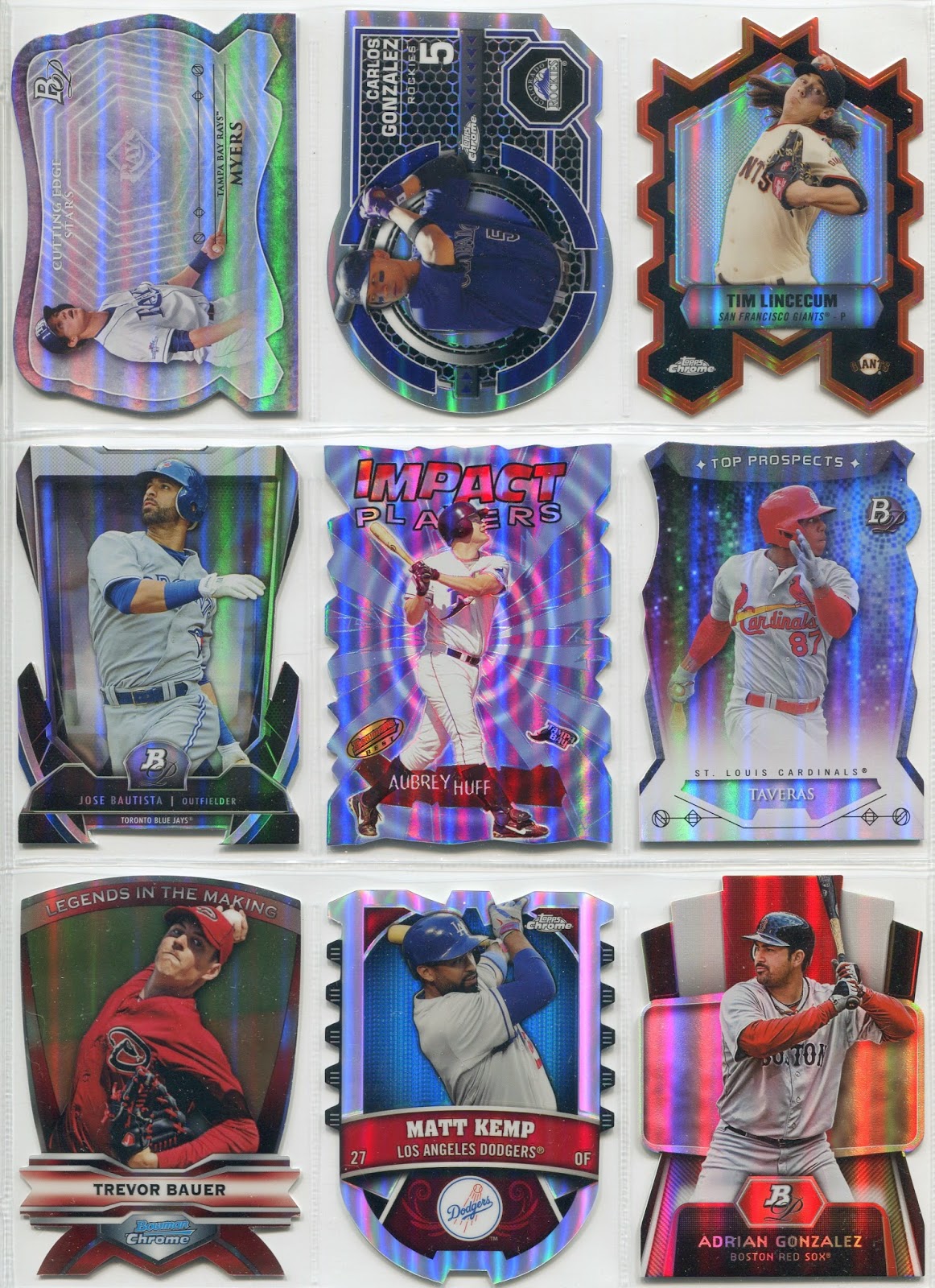 I stumbled upon the single greatest goldmine of dime box inserts I'd ever seen.

I'm guessing the guy was a case breaker of some sort, because I don't know how else it would be humanly possible for someone to have so many inserts. He easily had about three or four 3200-count boxes on display. I'd say about 80 percent of them were filled with inserts.

I only dug through two of the boxes, a decision which I'm sure made my wallet a bit happier. I mean, the fact that I was able to compile a page of nine different crazily-shaped inserts should attest to the variety of cardboard this guy had.

Although I'm still convinced Topps employed a first-grade art class to come up with these designs. 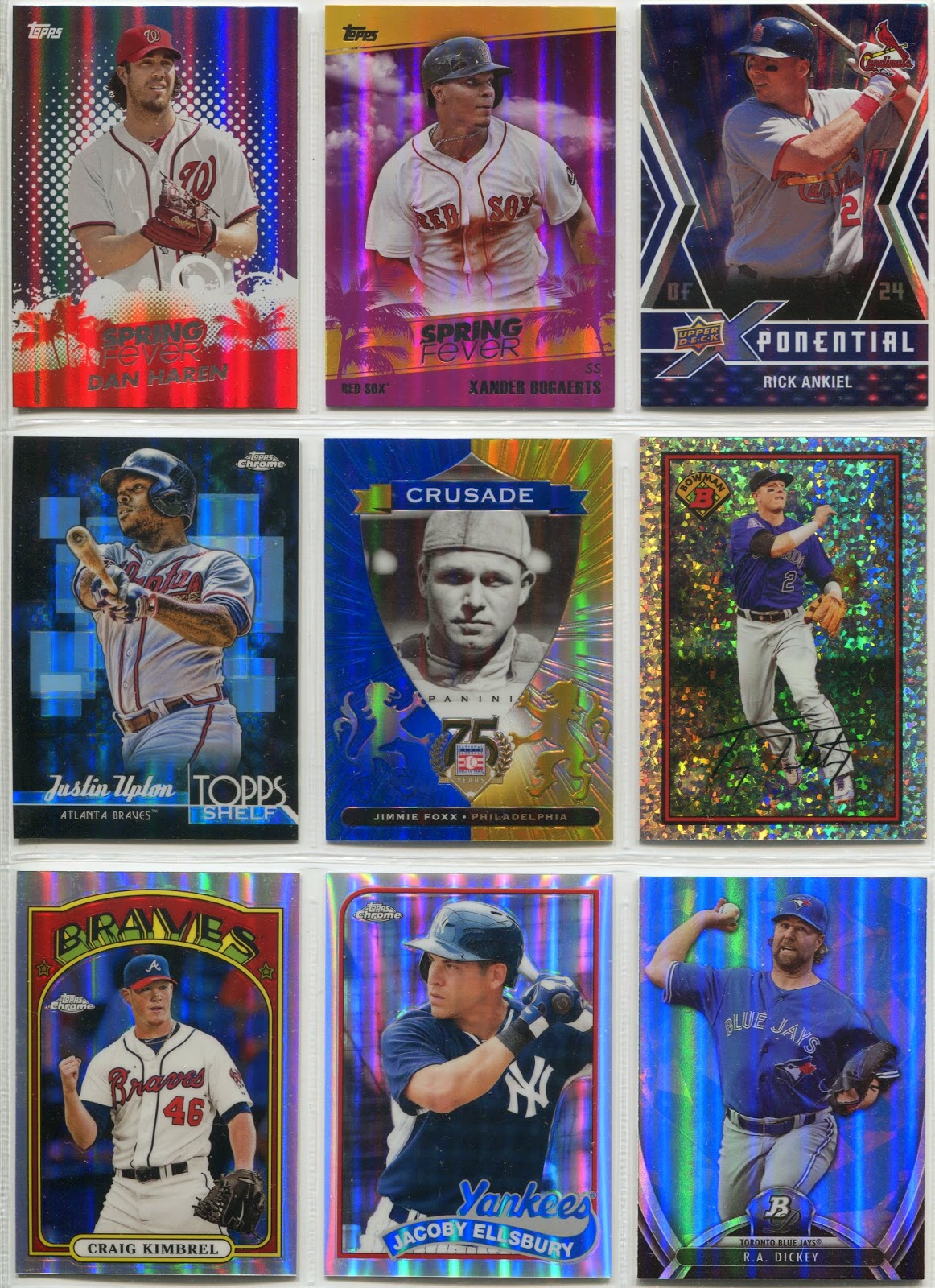 As if those weren't enough, the guy's boxes had the OOOOOH, SHINY!!!!!!! factor going by the boatload.

Like most inserts, cards like these are usually regarded as quarter or fifty-cent material. I guess I was just in the right place at the right time, because these beauties were dime box fodder to this particular vendor.

Baseball cards are living proof that we don't really ever outgrow our love for shiny objects. 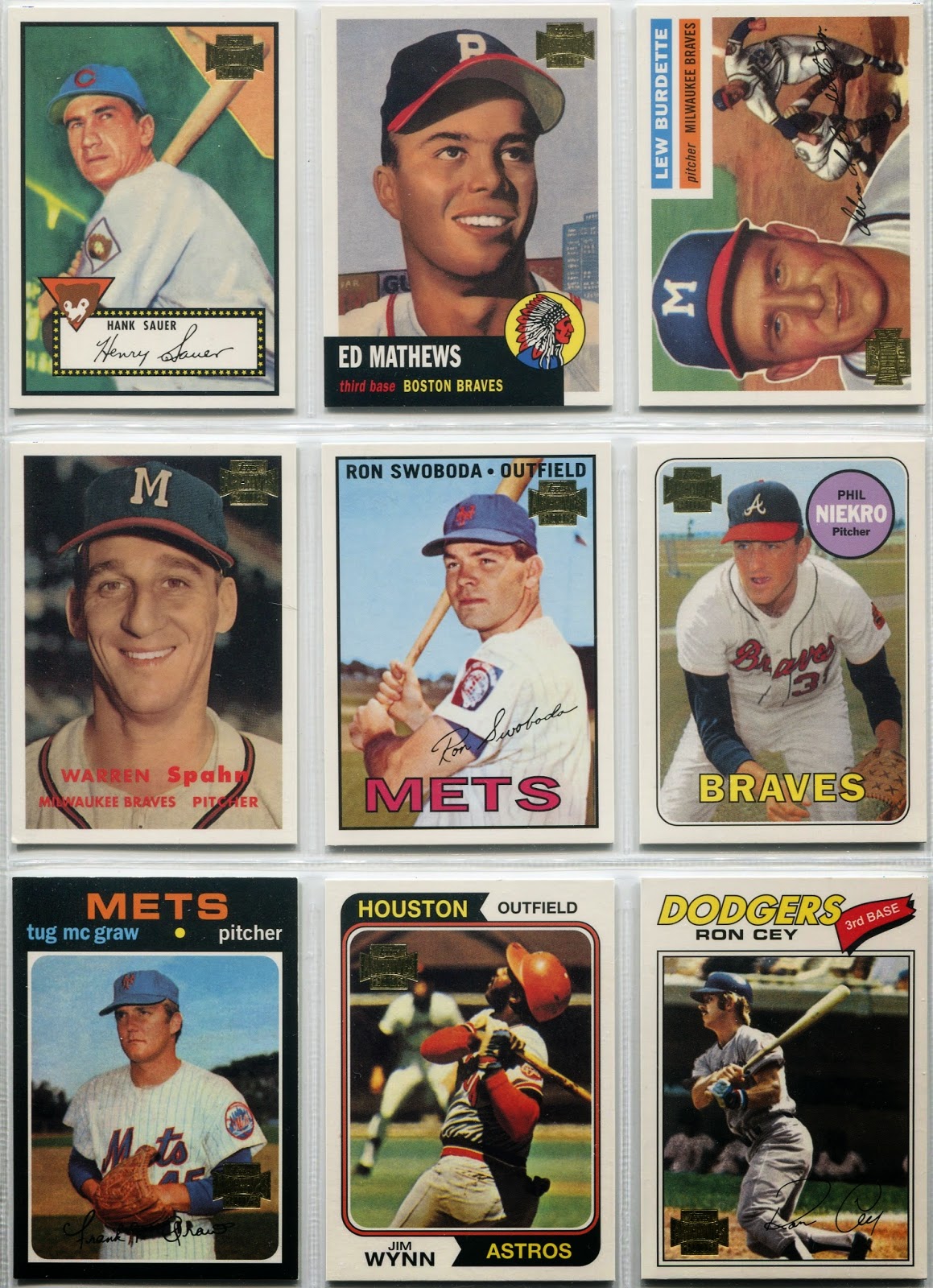 I guess the one disappointment about Sunday's first show was the fact that there wasn't a whole lot of cheap vintage on display.

Most of what I saw was the higher-grade, glass-case types which I obviously can't afford. I was a little bummed out, but the dime box I stumbled upon at the last table of the day cheered me up a bit.

I picked up around 100 cards from the guy, and about a quarter of those comprised of 2002 Topps Archives singles. I come across 2001 Archives cards quite often, but the 2002s (which I don't think were as popular) seem a lot harder to find.

I may have come up short on the vintage, but these neat reprints are the next best thing. 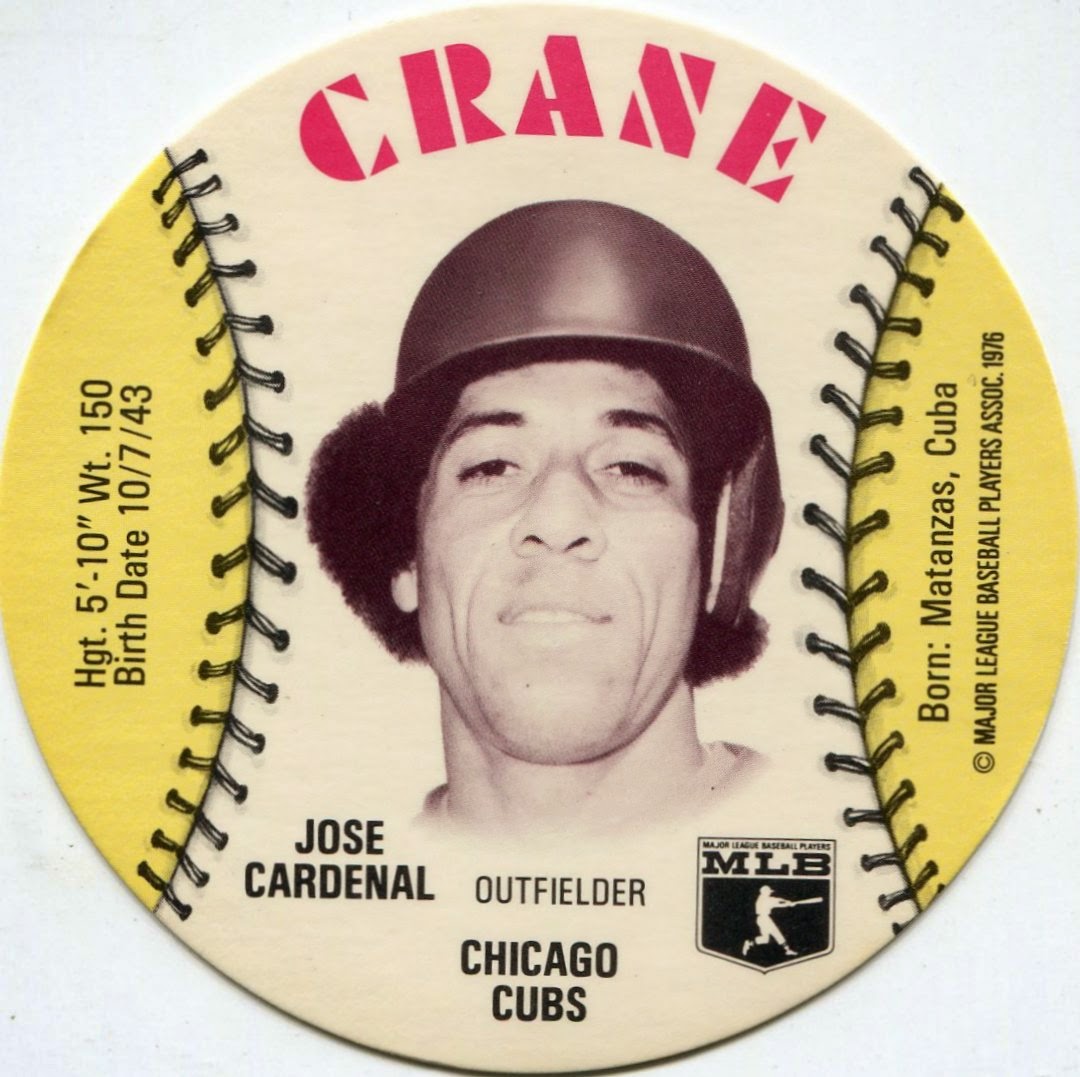 I didn't completely strike out with the vintage. Right as I was wrapping up my dig at that last table, a customer next to me pulled two disc-shaped cards out of one of the dime boxes. I could tell from a distance that they were the familiar oddball issues from the '70s.

The guy took one and put back the other. Now, I couldn't see the specifics of the one he bought, but I'm about 99.999999 percent sure that it couldn't have been better than Jose Cardenal.

Through the stories my dad has told me over the years, Cardenal has become one of my favorite '70s ballplayers. You can see his massive 'fro bulging out of one side of his batting helmet on this awesome oddball here.

Heck, even with all those gems, I still have another post to go. And I'm happy to report that my insert fever is dying down a bit.

Although I'm guessing it'll come back when I start typing up my next card show post.
Posted by Nick at 6:33 PM

WOWWIE! so many incredible cards, so little $$$! I miss Cooperstown too but fell hard for the Hall of Fame cards. I'm attempting to assemble Diamond Kings and blue/gold Crusades. Truly beautiful cardboard. HOF Boxes were certainly out of my price range. I'd love to stumble across these cards for less than $1 each.

There's always room in ones collection for a new Cardenal card! Also, maybe it's just me, but does it seem like Johnny Evers looks depressed on every card he's pictured on?

As a person who focuses on collecting minor leaguers, I can say that there is a light side to prospecting (it's so light that it can barely be called prospecting) that's fun and safe.

Awesome cards Nick! Did you happen to get the Jose Bautista from that Bowman reprint set? If not I'd be happy to set the one I just posted a couple days ago aside for you in the growing stack I have to send off (I didn't forget about our trade I'm just the slowest trader in the history of blogging).

Is the shot of you shuffling through the dime box your action variation?

Many great finds there!

Card shows are the best! I had a nice haul from one today, and not too different from what you picked out. One vendor had a 25/$1 box that I found a bunch of Panini Cooperstown in. You'd have loved it.

I've had that 1993 UD Strawberry since I was a kid. It was one of my favorites and I'd recognize it from a mile away.

Those Leaf Steel cards are not only heavy and shiny; they're also magnetic.

Not sure what's more impressive... these awesome dime box pickups (especially that Crusade Foxx) or the fact that you scanned all of these cards.