The day of two shows, Pt. 1: Down the street 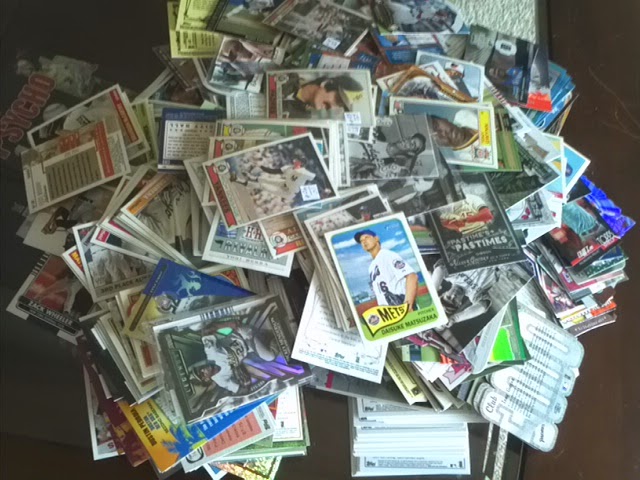 Yesterday, I did the unthinkable.

I attended two card shows in the same day. Such an experience, as you might guess, lent itself to quite a haul of cardboard. You can see the full extent of my pickups in the hopelessly scattered pile above.

I'd actually only planned to attend one show yesterday, but, on Saturday night, I found out that there was another one happening right down the road. That's when the plan of attending two shows in the same day began to form in my head. It was, in many ways, a perfect storm.

Both shows were held in hotels. The rooms were small (but not too small), which left my dad and I enough time and money to hit both. Both shows were literally on the same street, less then a five-minute drive away from one another. And, since I'd never attended either one before, the surprise factor was there both times.

Tonight, I'll recap the second of the two gatherings I attended in what was the most show-filled day of my life. 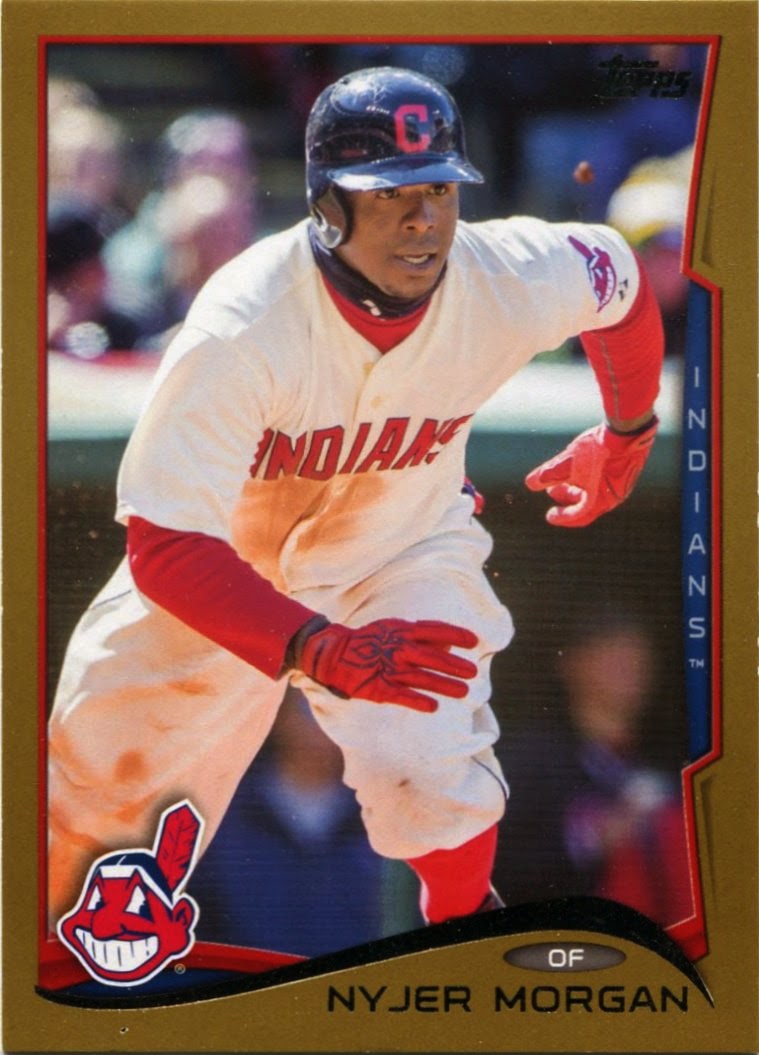 With a bag of cards already in tow from the first show, I peeked my head into the room of the second.

And, I have to say, I was, initially, a little disappointed. There were only four vendors in the cramped room, and probably only two or three customers wandering the aisles. There was an eerie hush in the air.

One of the vendors was already complaining about the lack of attendance when my dad and I got there. Although, from personal experience, I've found that you'll probably hear such complaints from at least one vendor at every card show, no matter the size.

As I started to look around, however, I found that, despite my first impressions, there was some nice cardboard to be had.

I ended up buying something from three of the four vendors after all was said and done. 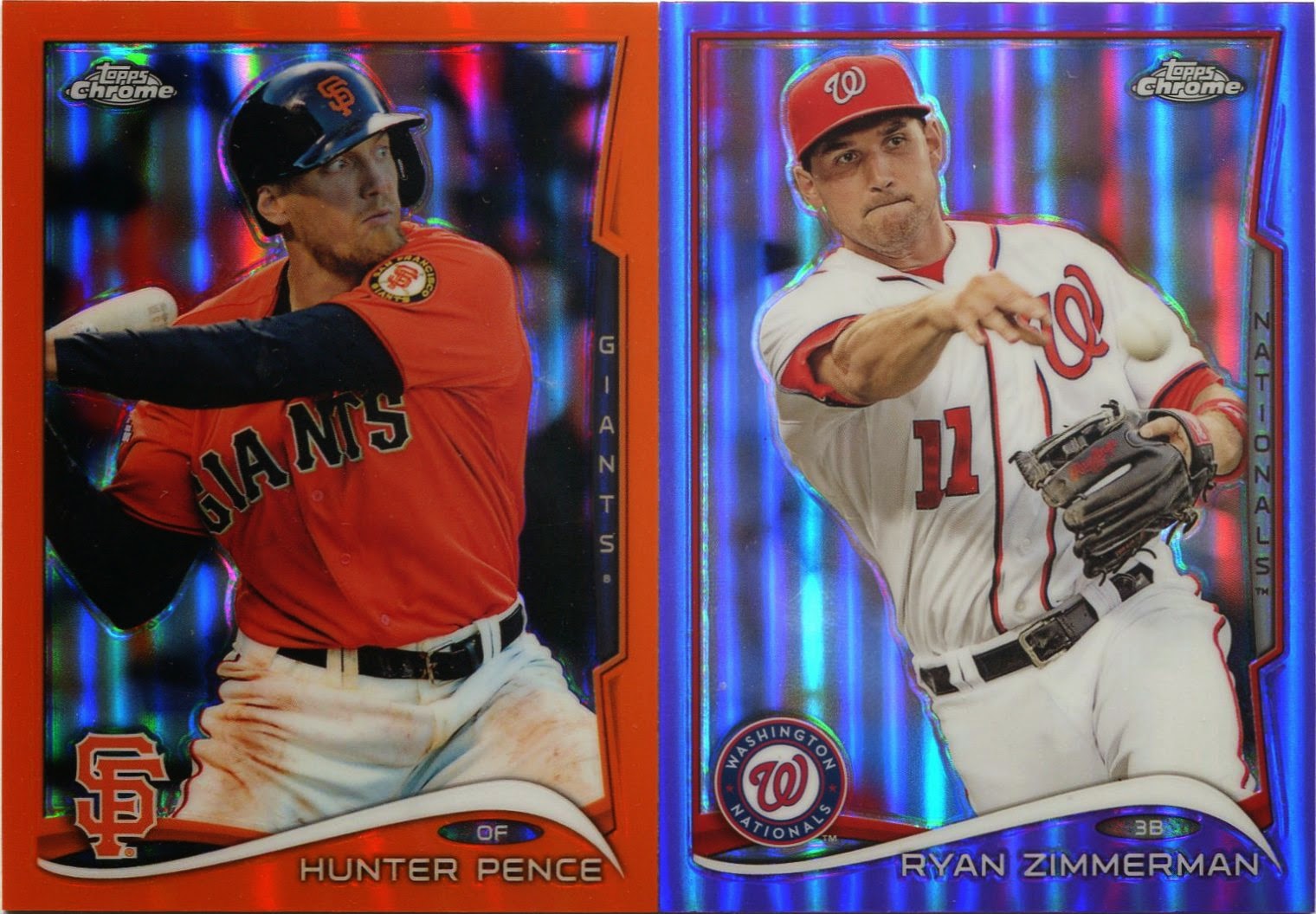 Most of you probably know where I spent my time. You'd think that these two refractors (as well as the Nyjer Morgan gold parallel) would be in the sleeved pile, but they were actually unsleeved, free to be touched by any random grubby hand. It sure felt great to nab some purrrrrty colors for just a dime.

And I love how well Pence's uniform clashes with that candy orange border. 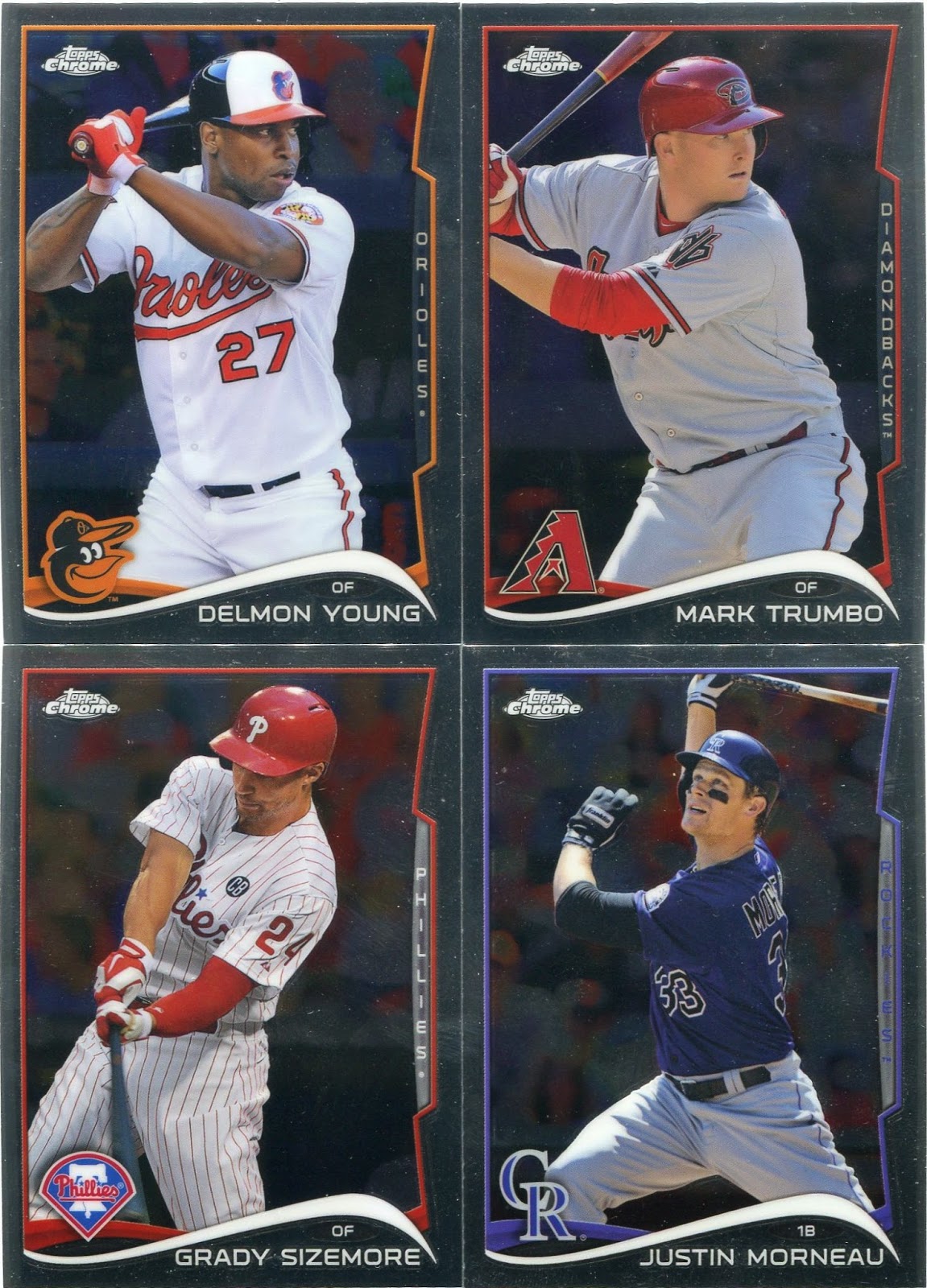 This quartet of Chromies were also unsleeved.

I pounced on them once I found that they were actually part of last year's Update Chrome series. Packs of these were only available through a special $14.99 Update bundle in retail stores.

Why spend fifteen bucks when you can get them for mere dimes? 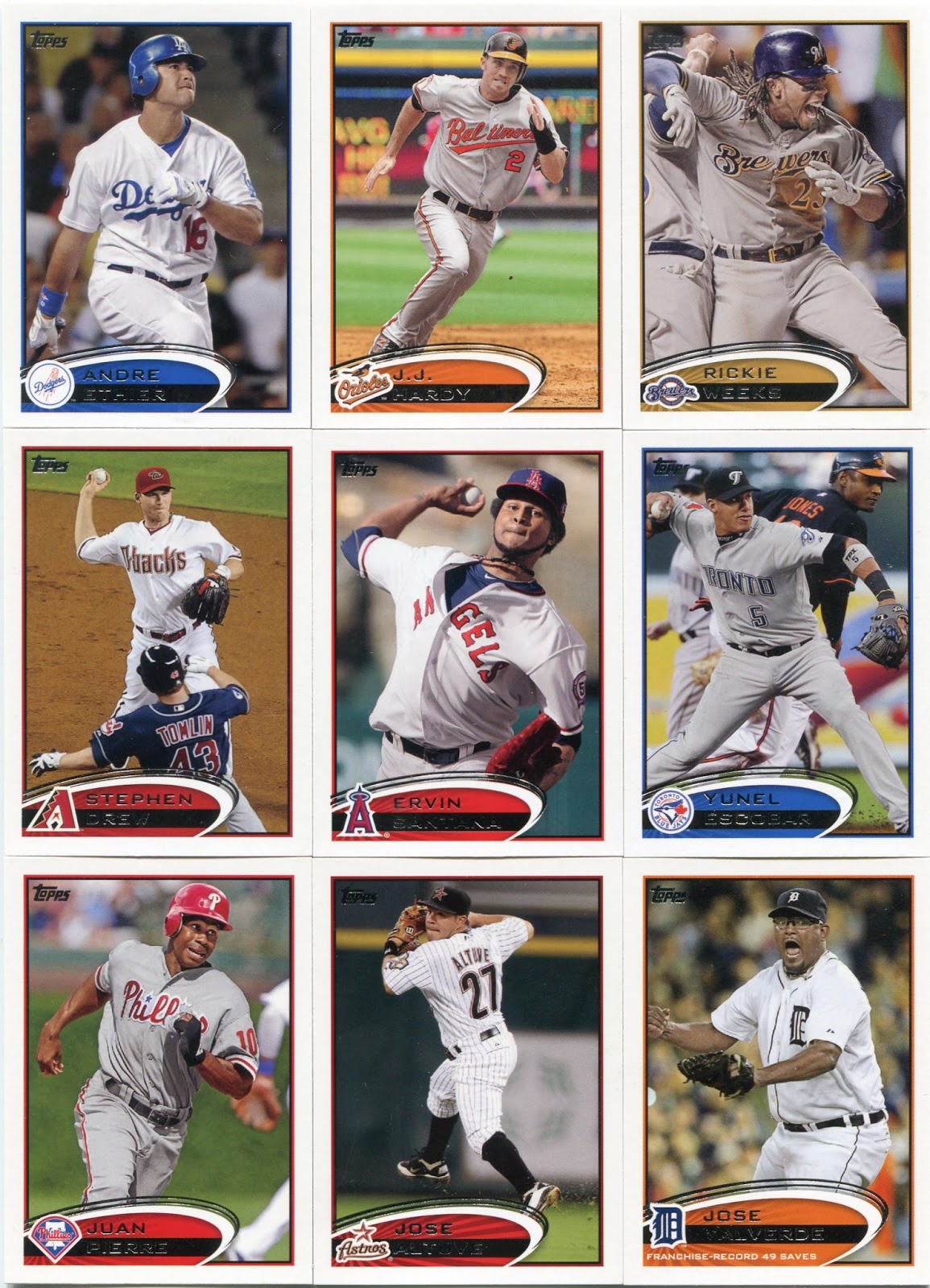 As you might remember from the last card show I attended, I can go a little nuts when it comes to Topps Minis.

The stack from this guy's box (again, unsleeved) wasn't as substantial as the one from a couple months ago, but I still managed to pluck out about 40 new minis for my collection. And, unlike February's pile of 2013s, these comprised of singles from the 2012 checklist.

The surfboard design looks a little better in mini form. 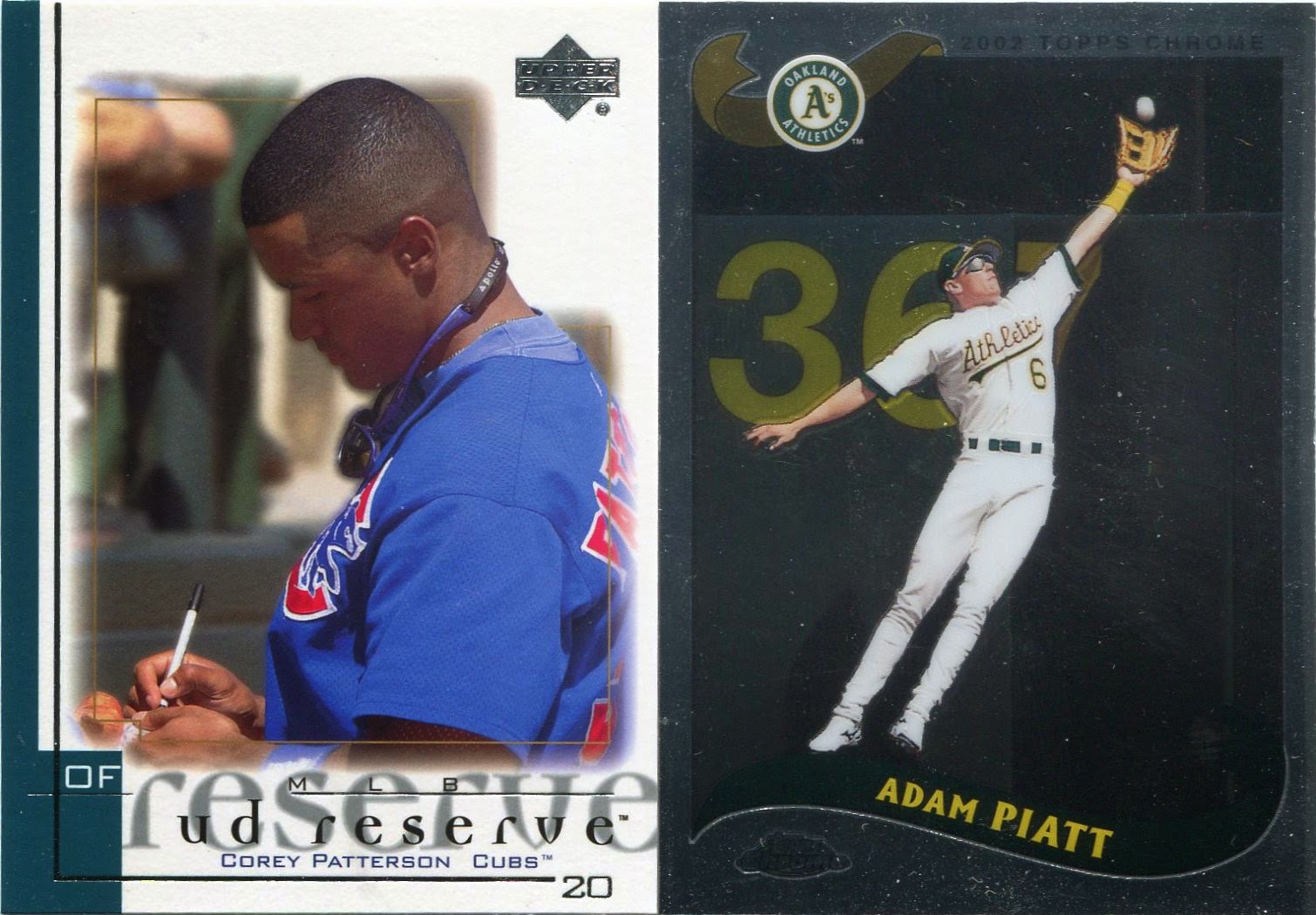 The first dime box I looked through at this show wasn't as substantial.

The box itself was only about half full, and it was mostly stocked with overproduction era cards. But I managed to find about a dozen saving graces in what seemed, at first glance, to be an unspectacular pile of cardboard.

These two mini-collection hits brought a little spice to this dime box dig. 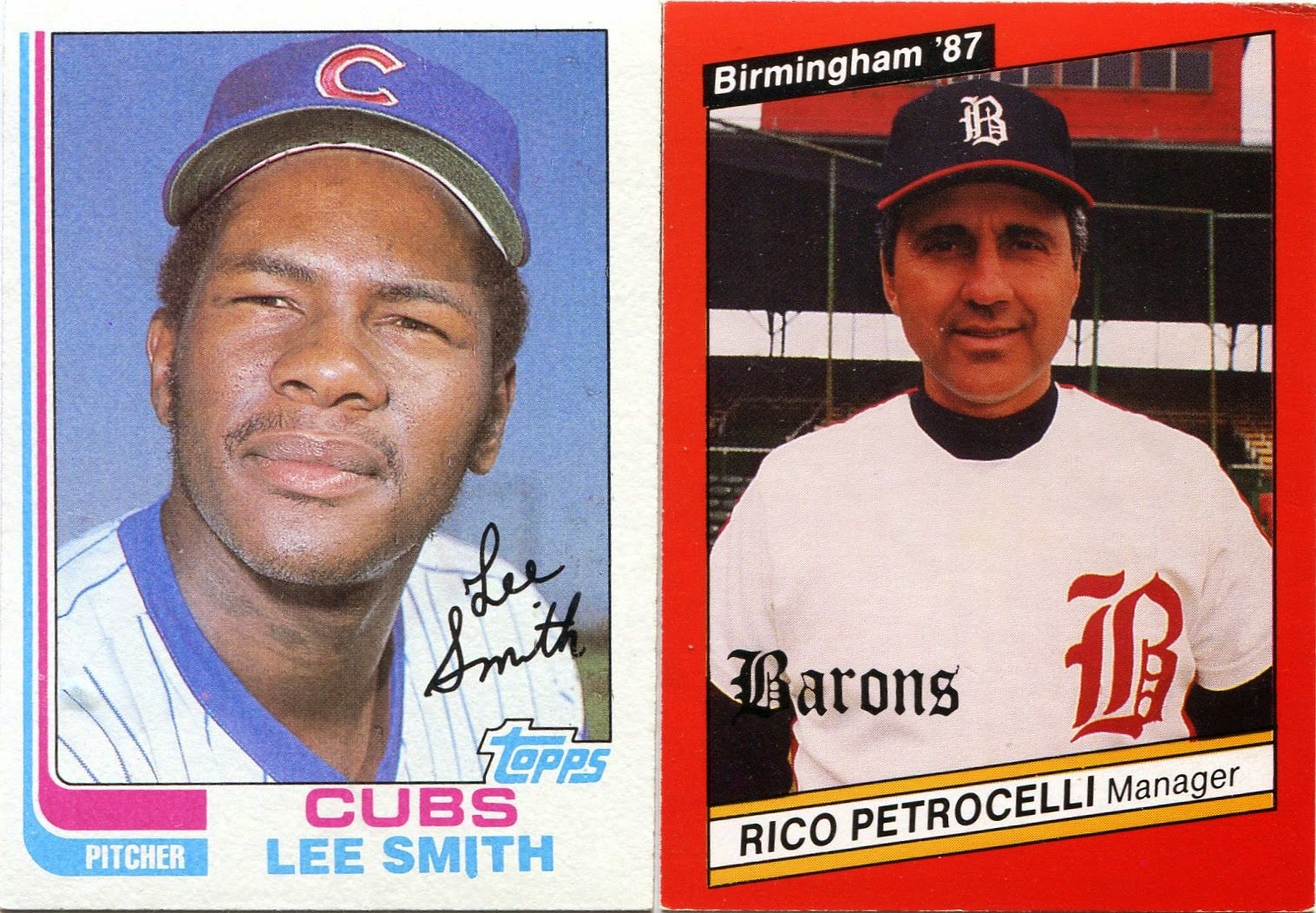 Perhaps the biggest surprise of the afternoon was pulling a Lee Smith rookie card out of a bunch of other overproduced rubble.

I've actually wanted a Smith rookie for a while, and, in the end, it came from quite an unlikely source. But, as great as it was, let's not sleep on that Rico Petrocelli minor league manager card, either.

Minor league sets are a quarry for hidden gems. 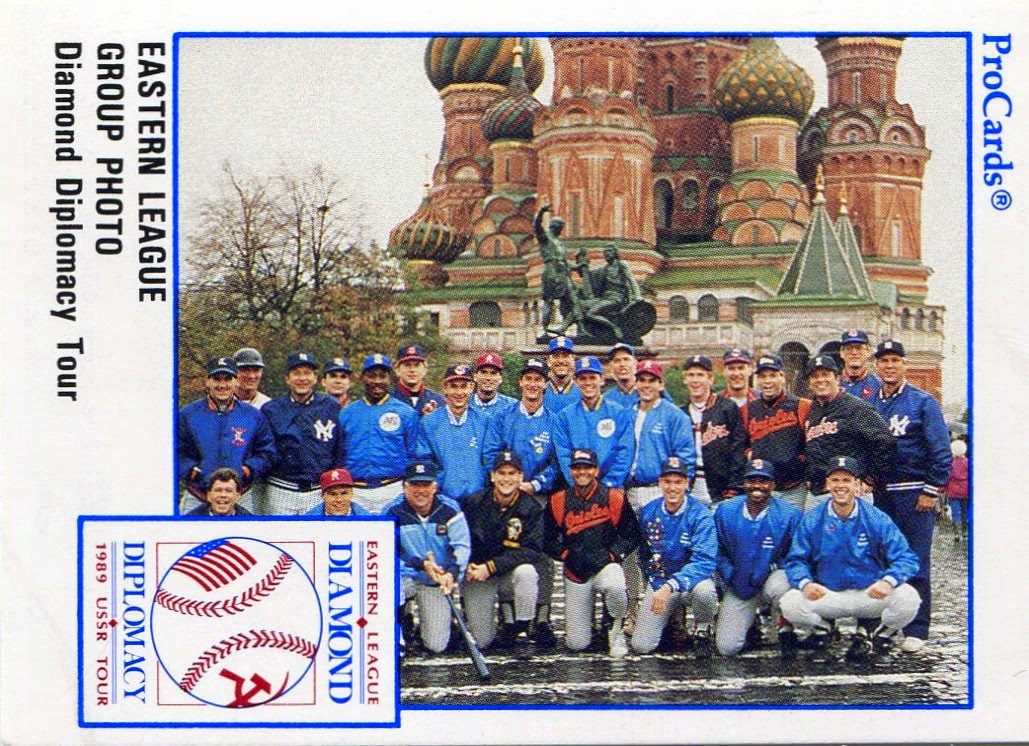 See what I mean?

I'm not exactly sure what constituted the "Diamond Diplomacy Tour" that's described here, but I do know that I now own an awesome baseball card that features a bunch of minor leaguers posing in Moscow's Red Square.

Only in the minors. 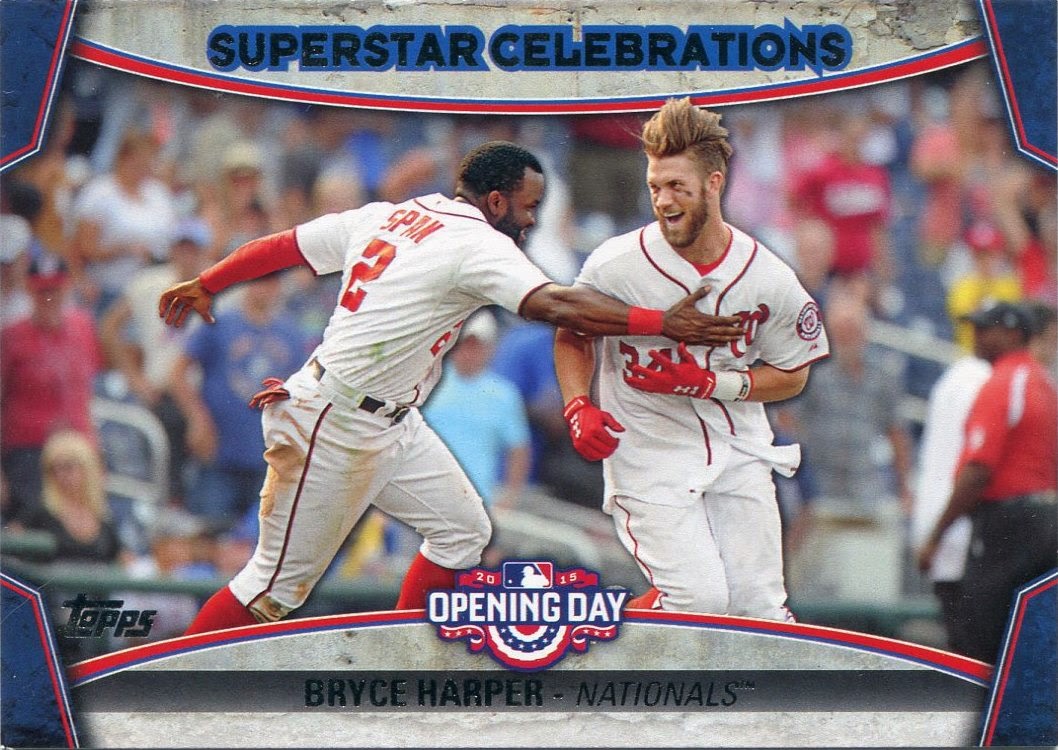 Despite the small nature of the show, there was still some "latest and greatest" cardboard in the building.

One of the vendors had a box of 2015 inserts and base cards on display, none of which were priced. That, as I've mentioned before, is a bit of a red flag for me when it comes to card shows. I want to know the price up front. I have to know what I'm getting myself into.

But, despite my feelings towards unpriced cardboard, I'm happy to report that it all worked out in the end. The vendor let me have this Bryce Harper "Superstar Celebrations" insert for a mere fifty cents.

The flowing hair is in full force here. 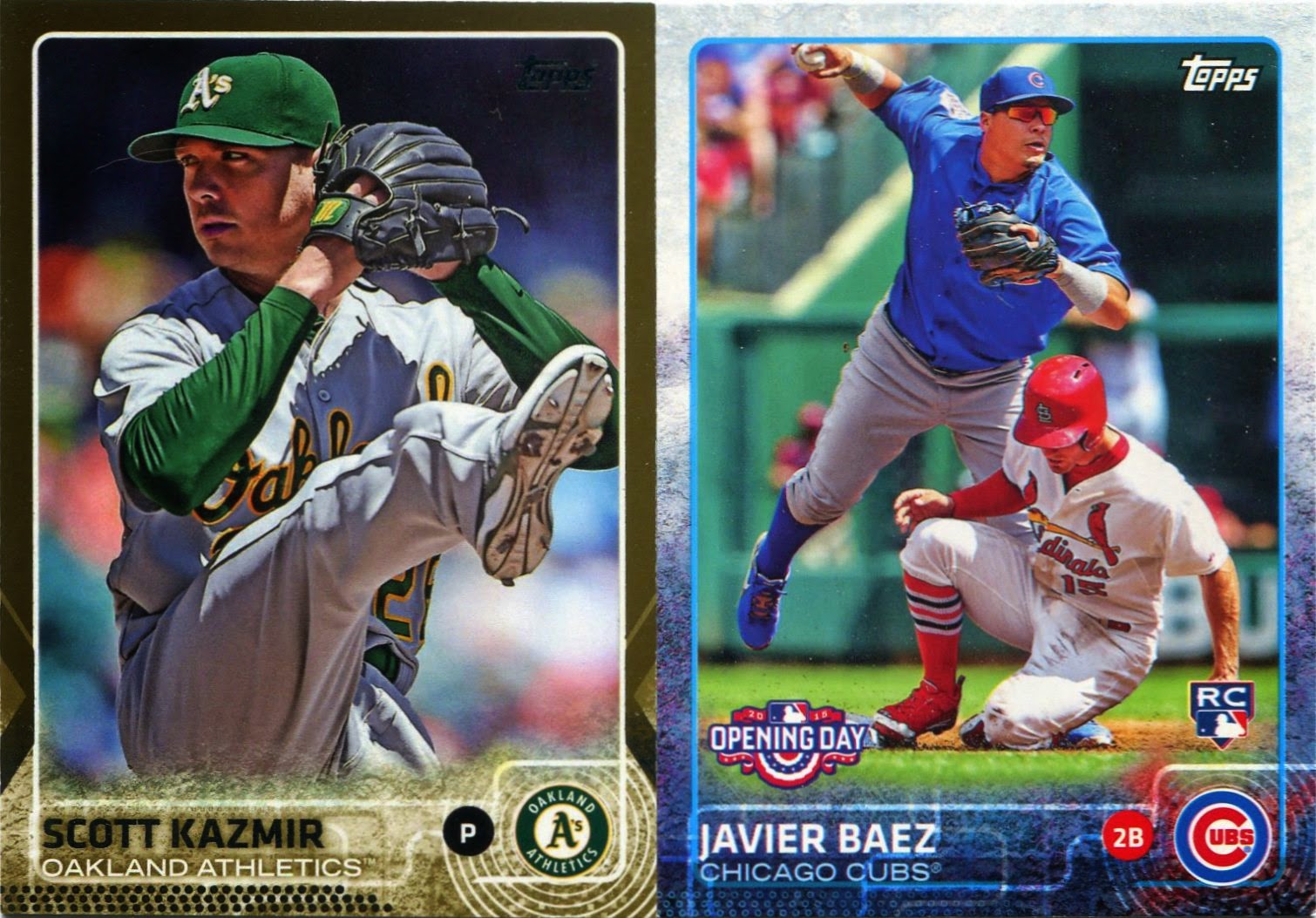 Let's hope he turns things around in the near future. 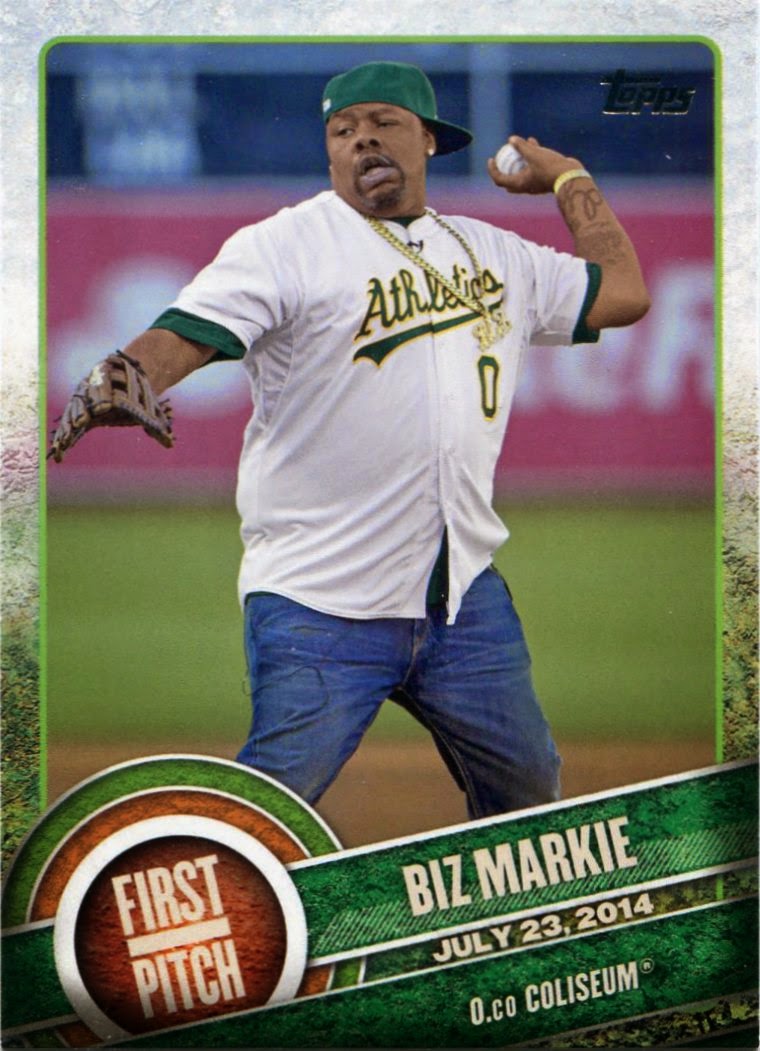 BUT YOU SAY HE'S JUST A FRIEND

AND YOU SAY HE'S JUST A FRIEND 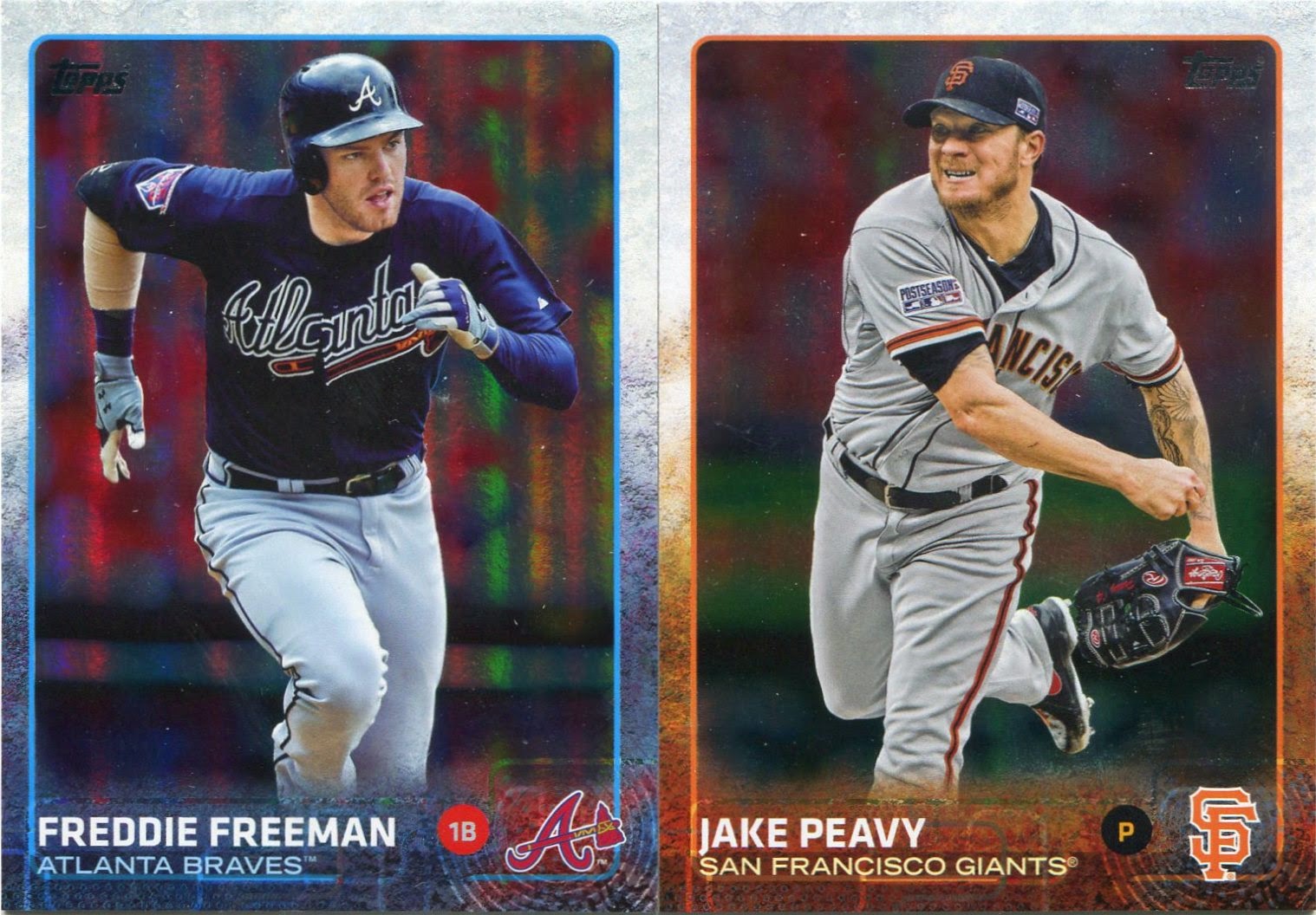 One of the other vendors (the sleeved/unsleeved guy) had a small quarter box of 2015 inserts and parallels up for grabs. Though I could've spent a lot more, I limited myself to just ten cards. (I had oddly good self-control yesterday.)

Biz and these two foil parallels made the final cut. 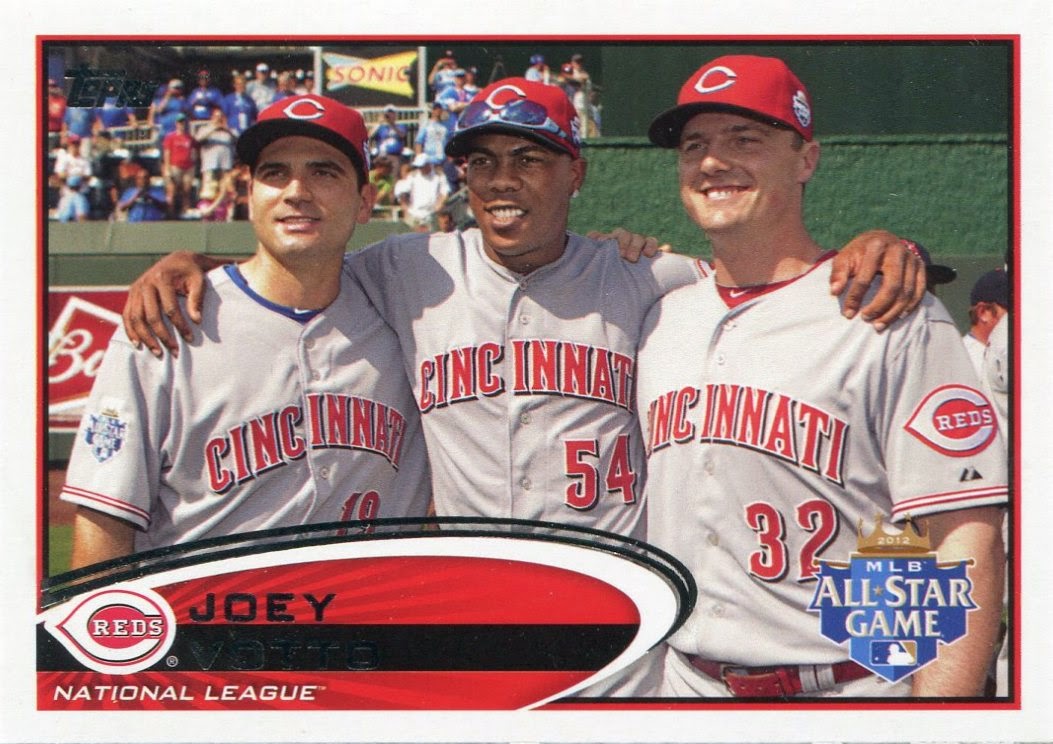 That same vendor had some miscellaneous piles of scattered higher-dollar cards sitting on the adjacent table.

I could tell they were more expensive because each one was in a penny sleeve and toploader. Higher-dollar cards are much more sheltered from human hands. (Seems like a paradox sometimes, doesn't it?)

At these types of smaller shows, however, "high-dollar" cards can still be in my price range. (Although my dad and I did see someone drop $135 on a single card as we were leaving. Neither of us got a glimpse of what the card in question was, though.)

For a dollar, this neat Joey Votto short-print was well within my budget. 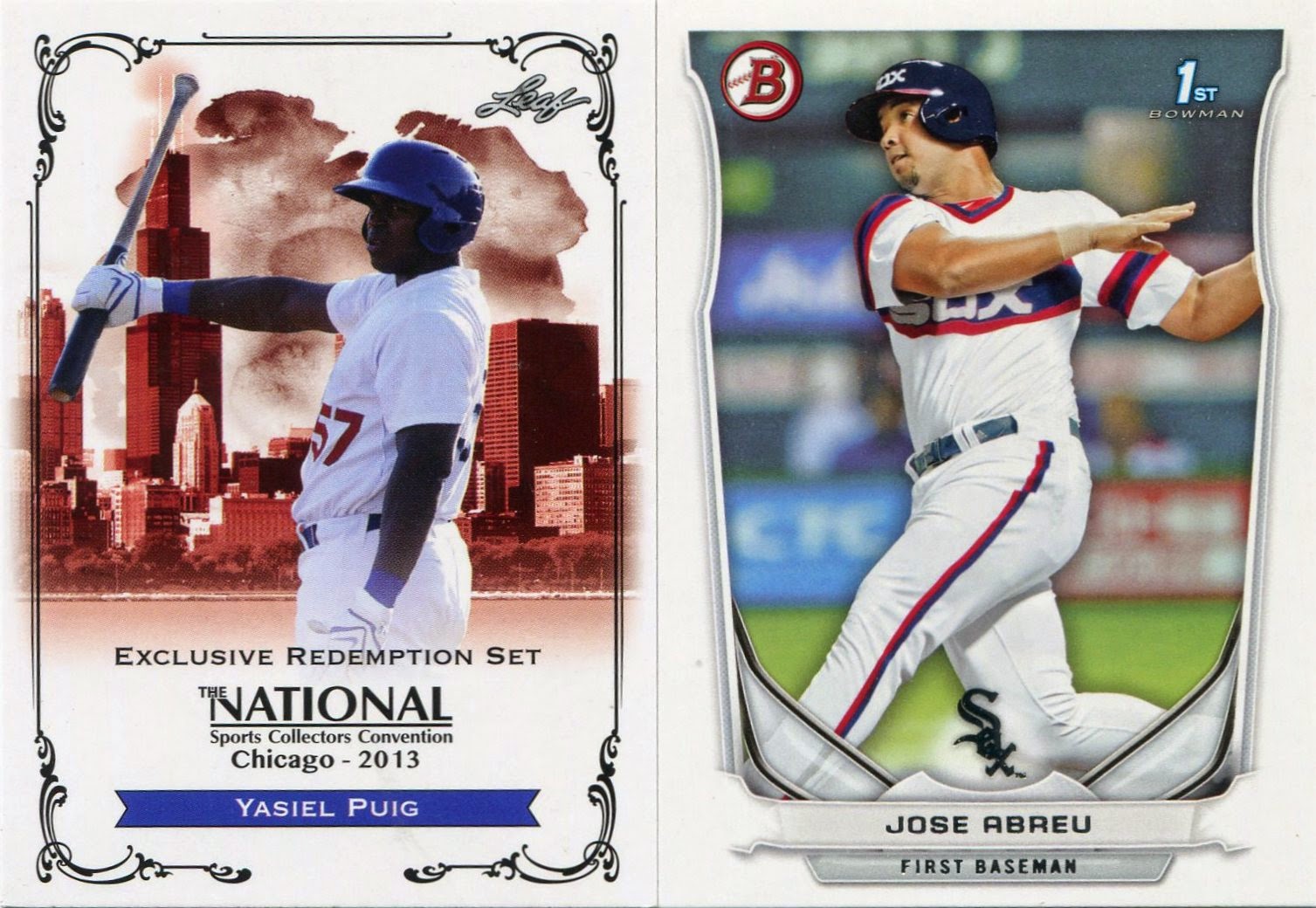 At two bucks a pop, these were the most expensive cards I picked up at this show.

I've wanted the Abreu ever since it hit the shelves last year, as it's looking like he'll be a force on the South Side of Chicago for many years to come. Well, that, and the fact that Topps photoshopped him into a throwback Sox uniform for some reason.

The Puig was a much more oddball-ish find, in that it was exclusively given away at the 2013 National here in Chicago. My dad and I were at that show, oddly enough.

And now I have a card commemorating it, two years after the fact. 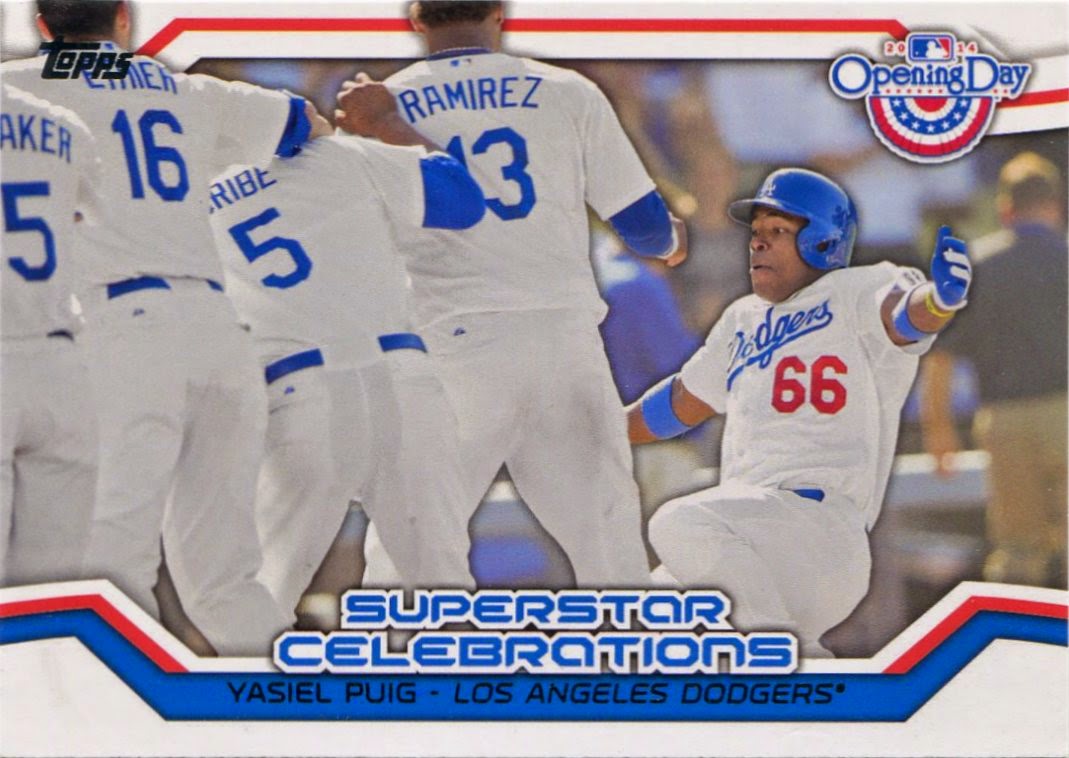 I'm not sure which of my Puig pickups was better.

The oddball National card, or this one? This "Superstar Celebrations" insert was only a buck, and features a shot of Puig sliding into home after a game-winning homer. Call it hot-dogging if you want, but at least the guy has fun.

Ah, heck. I can't pick one Puig over the other. 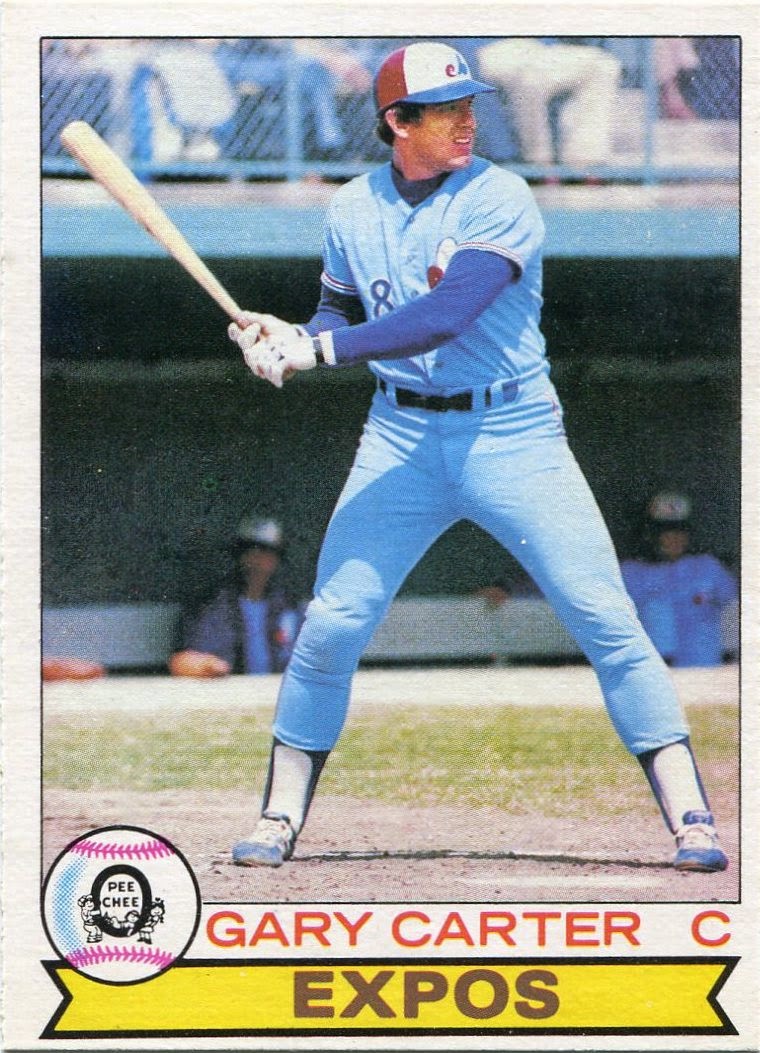 Could it be time for some... 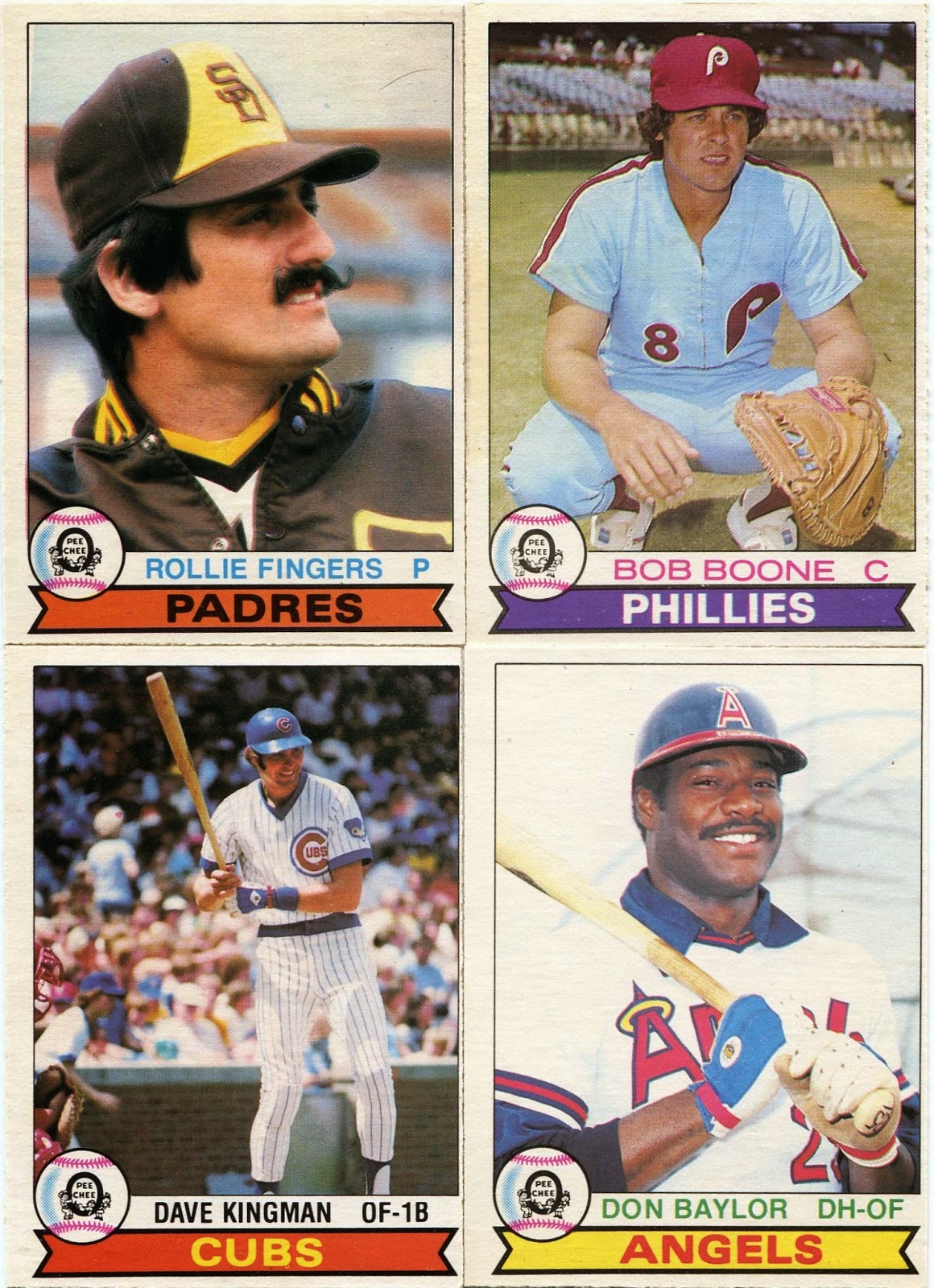 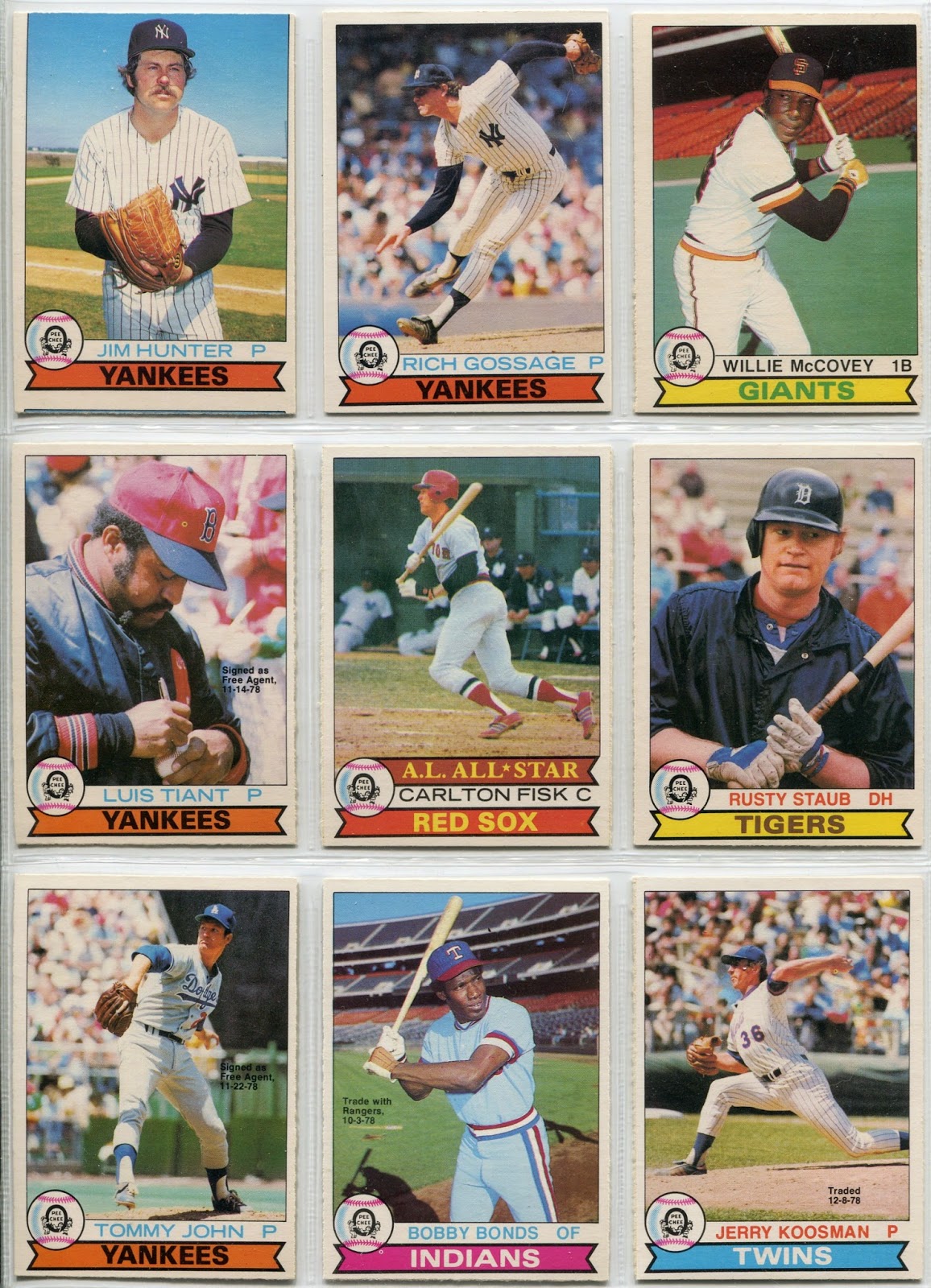 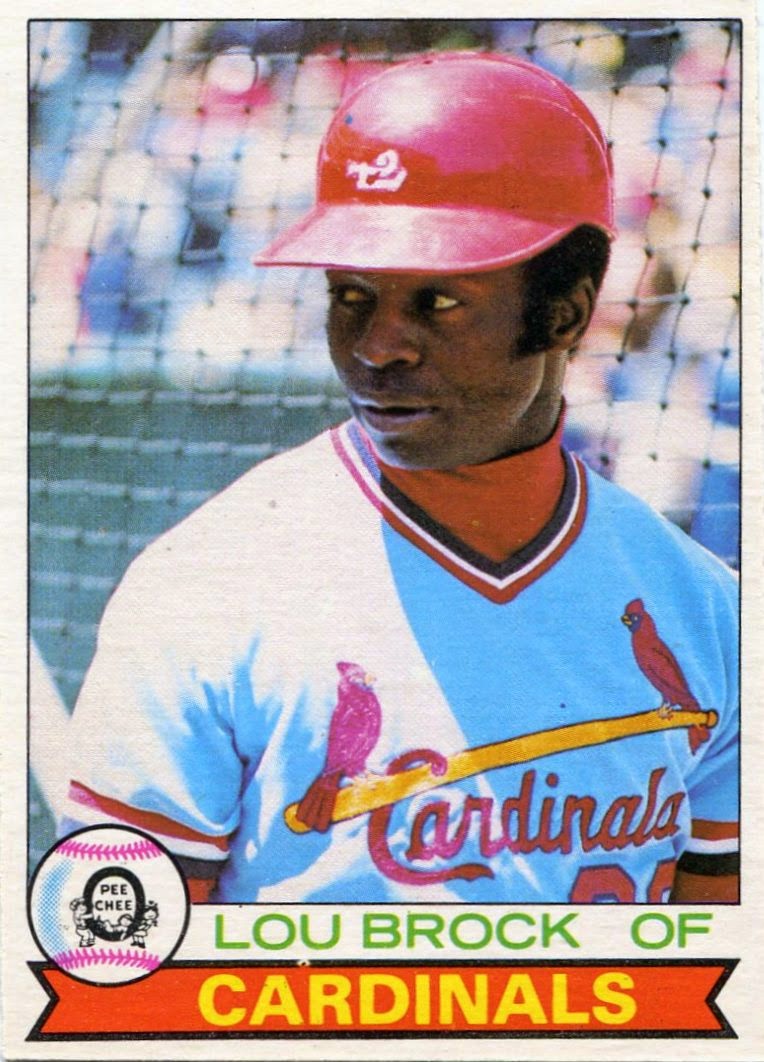 Aside from picking up some much-needed nine-pocket pages (buying supplies is a card show first for me), the big story of the last vendor was the small box of miscellany he had tucked away in the corner of his table. I almost didn't even notice it was there.

In it, I found a hearty stack of '79 OPCs, all affordably priced. At a buck, the Brock was the most expensive of the bunch. (And also my personal favorite, due to its sunset status.)

Almost all of the others were priced anywhere between 30 and 75 cents a piece.

That's a bargain for anything vintage, much less OPCs. 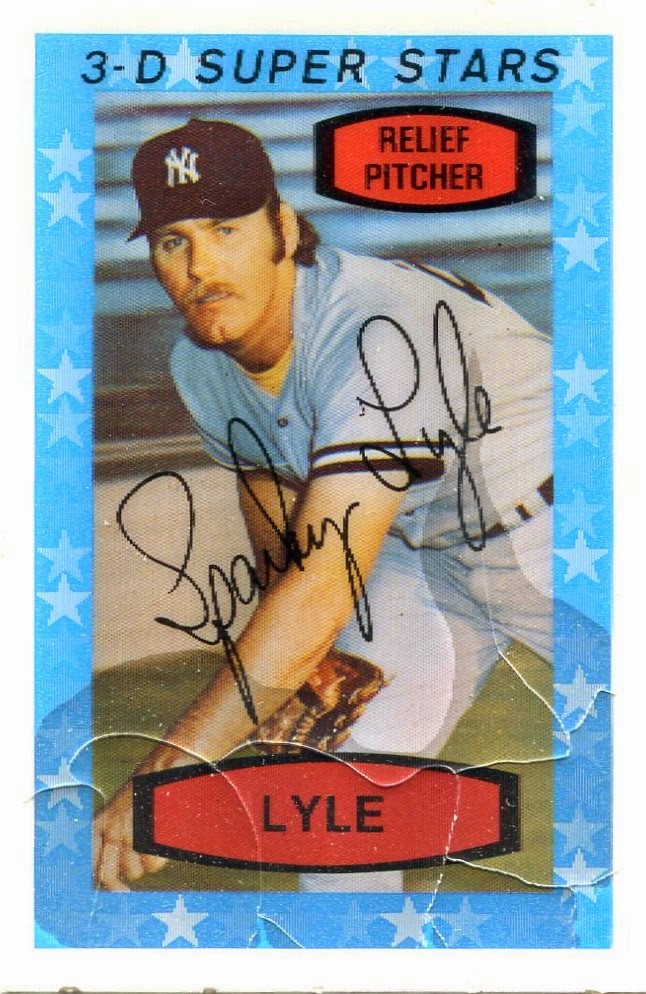 The guy also had a few Kellogg's singles up for grabs, but, for some reason, most of them were woefully overpriced.

I did manage to salvage at least a little bit of 3-D goodness with this Sparky Lyle, mine for just a buck because of its cracked surface.

All in all, I only spent about twenty-five dollars at this show, which, when paired with another much-appreciated grant from Dad, came in at well under budget.

These finds alone would've made the day a memorable one. But, when dad and I were walking back to the car, I remembered that I already had a bulging bag of cards waiting for me, the spoils from the first show I'd attended on Sunday.

As great as the second show was, the first was actually a little better.

Nice! Two shows in one day is great fun!

Two shows in one day? That's a trick I'd love to pull off some day. The hotel shows are virtually nonexistent around here, though I've been to a few in other states. I too have seen the "6 people with baseball cards in a silent room" shows.

As always, awesome pickups. I feel like we're doing important work, liberating fantastic cardboard from the unappreciated confines of a dealer's dime box. Keep up the good work, Brother Nick.

And those purchases are awesome! So many goodies... I actually created my Top 5 favorites: