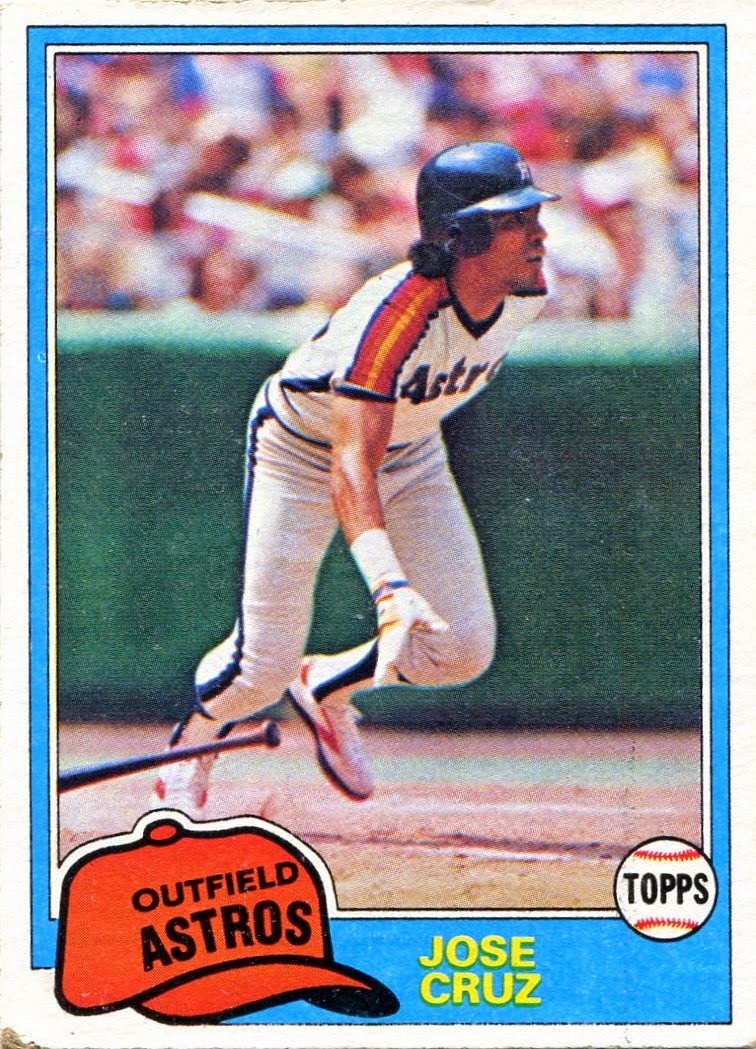 I think I surprised even myself when 1981 Topps came in at #9 in my All-Time Topps Countdown.

It seems like most collectors have a healthy respect for '81 Topps, but I doubt many would rank it as highly as I did. For a while, I couldn't figure out what it was that made it a Top 10 set for me. I was stumped.

Sure, it's colorful and features some of the best photography of the '80s. But you can apply "colorful" and "great photography" to quite a few other Topps sets. It's not that big of a rarity. What the heck was it that made '81 so special? It took a while, but I think I finally figured it out.

It's the baseball cap in the design. That is what catapults into the Top 10 for me. The use of hats is both a striking and innovative design element, one that truly separates '81 Topps from the rest of the pack.

To go even further, it got me digging for other sets that incorporate pieces of baseball equipment. 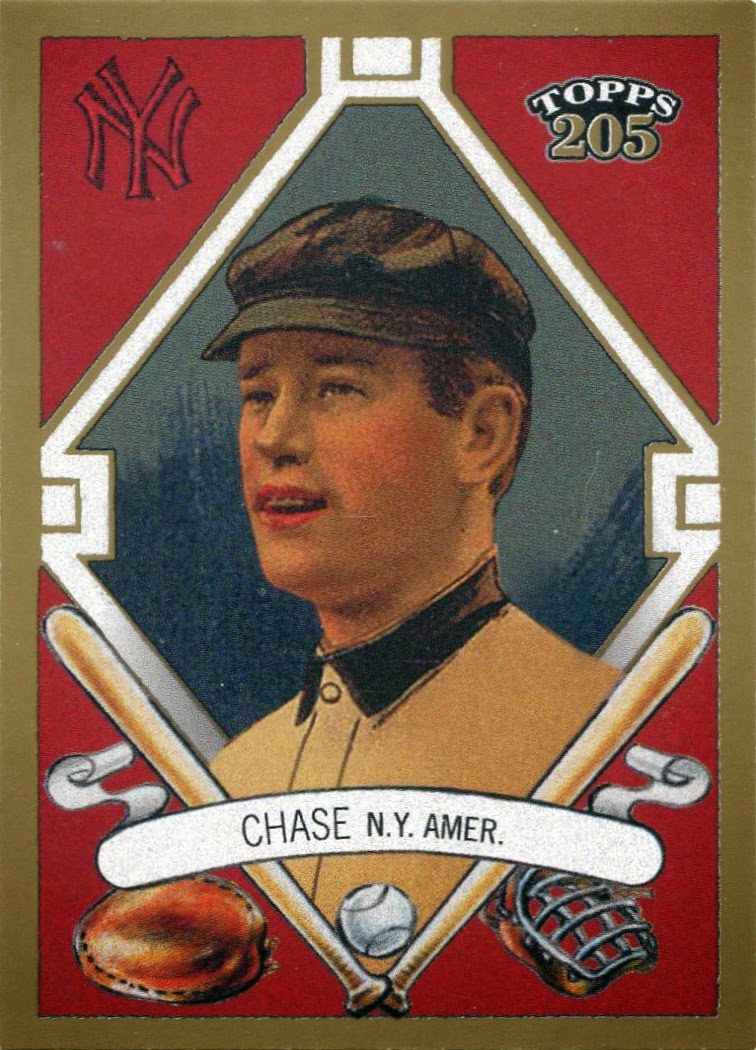 And, as I found, it made me realize how much of a near-universal love I have for sets that choose to recognize the tools that our favorite ballplayers have used over the years.

As this T205 Hal Chase indicates (a reprint...obviously), some of the oldest baseball cards in history have worked various pieces of equipment into cardboard designs. You could argue that these old tobacco sets did it better than anything that would come afterwards.

On this card alone, we have bats, a ball, a glove, and a catcher's mask. And let's not forget that the frame for each picture is set within a baseball diamond.

Now that's getting the most out of a design. 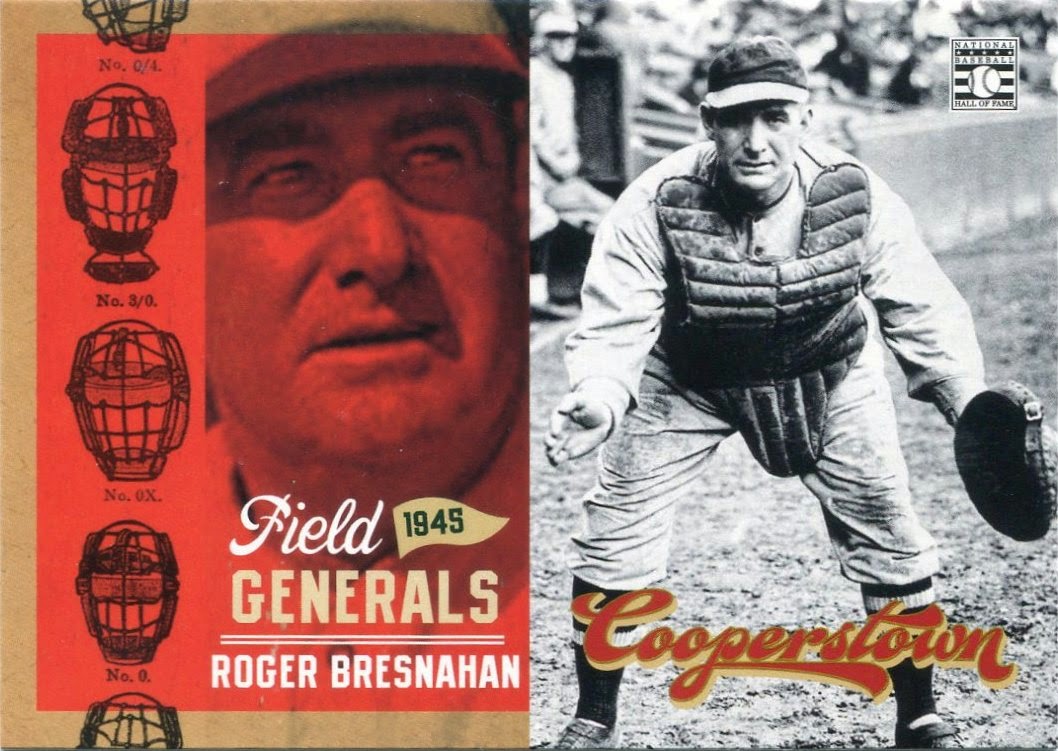 While they may not be able to top the T205s, other sets have worked pieces of equipment into their designs.

These very under-the-radar "Field Generals" inserts from Panini Cooperstown make great use of the evolution of the catcher's mask around the turn of the century. You can see a few blueprints lined up on the left side of this Roger Bresnahan card.

Maybe it's just me, but the look of those turn-of-the-century masks has always creeped me out in an odd way. 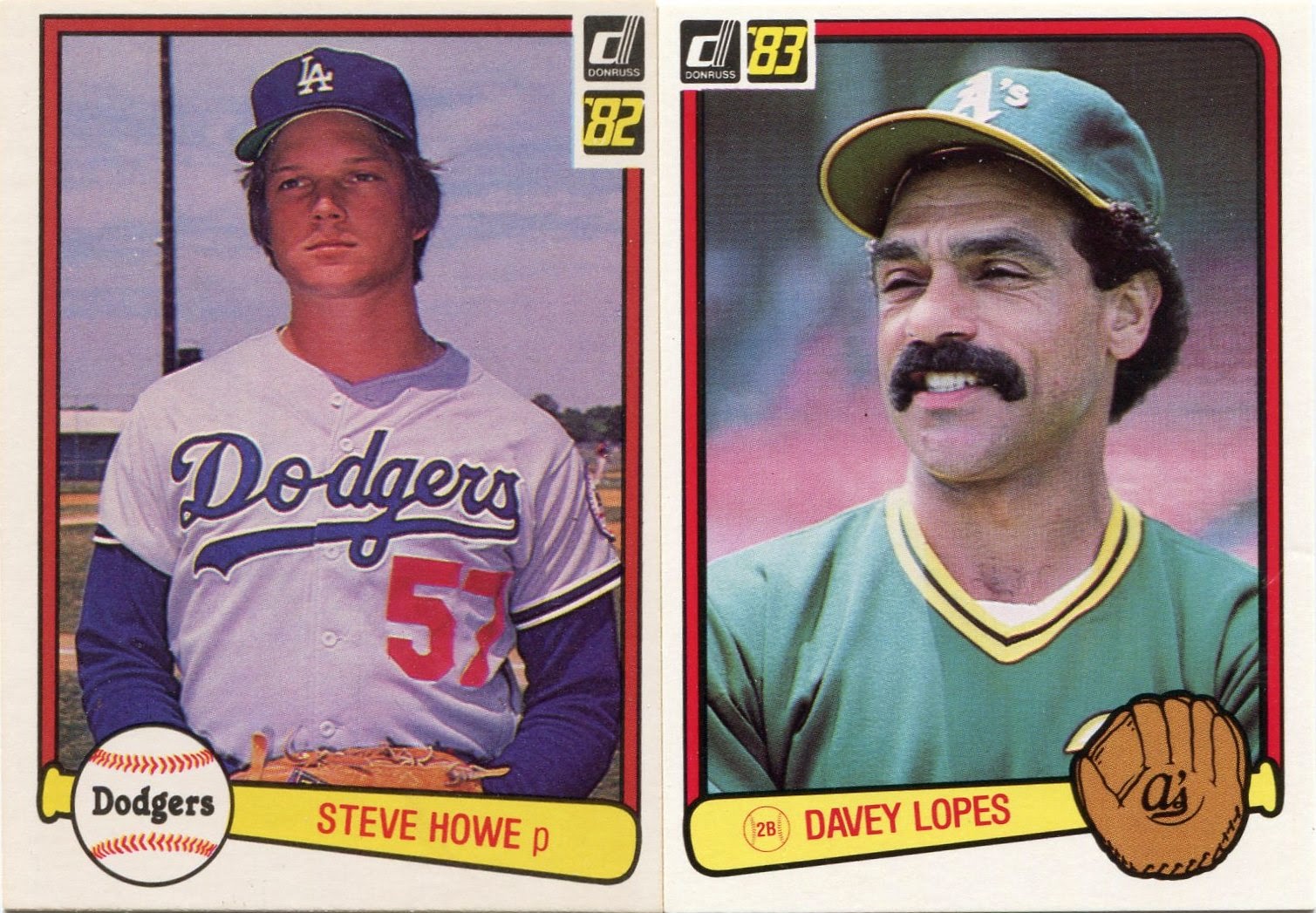 Say what you want about the similarities between 1982 and '83 Donruss, but both sets made great use of equipment.

Each design features a bright yellow bat as a nameplate, which I always thought was neat. On top of that, '82 Donruss used a baseball for the team names, while the '83 edition used a mitt. 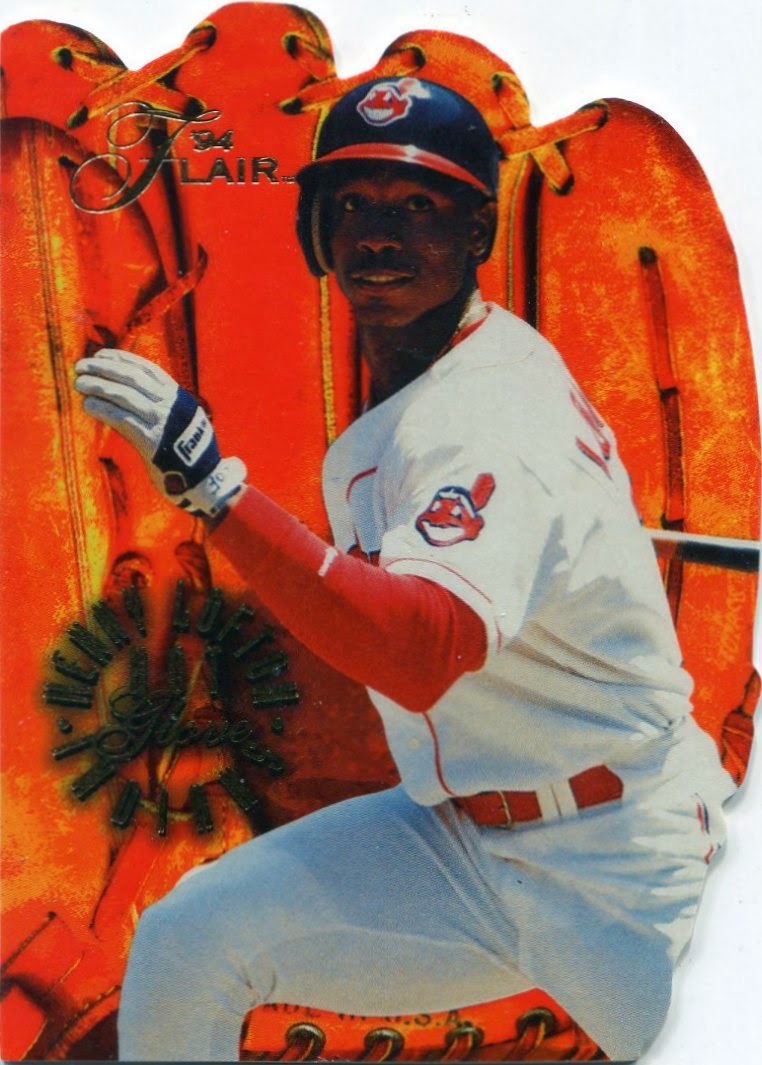 ...I picked this beauty up for 50 cents at the local flea market last year.

I didn't know it at the time, but these 1994 Flair "Hot Gloves" inserts are fairly rare. A few other bloggers had to fill me in on their scarcity after the fact, which made the 50-cent price tag seem even better.

It's nice to know that these are desirable, but the only reason I picked it up in the first place was because it was a Kenny Lofton card I didn't already have. That...and the fact that it's shaped like a mitt.

Even nearly a year after the fact, I still can't believe how much I love this card. 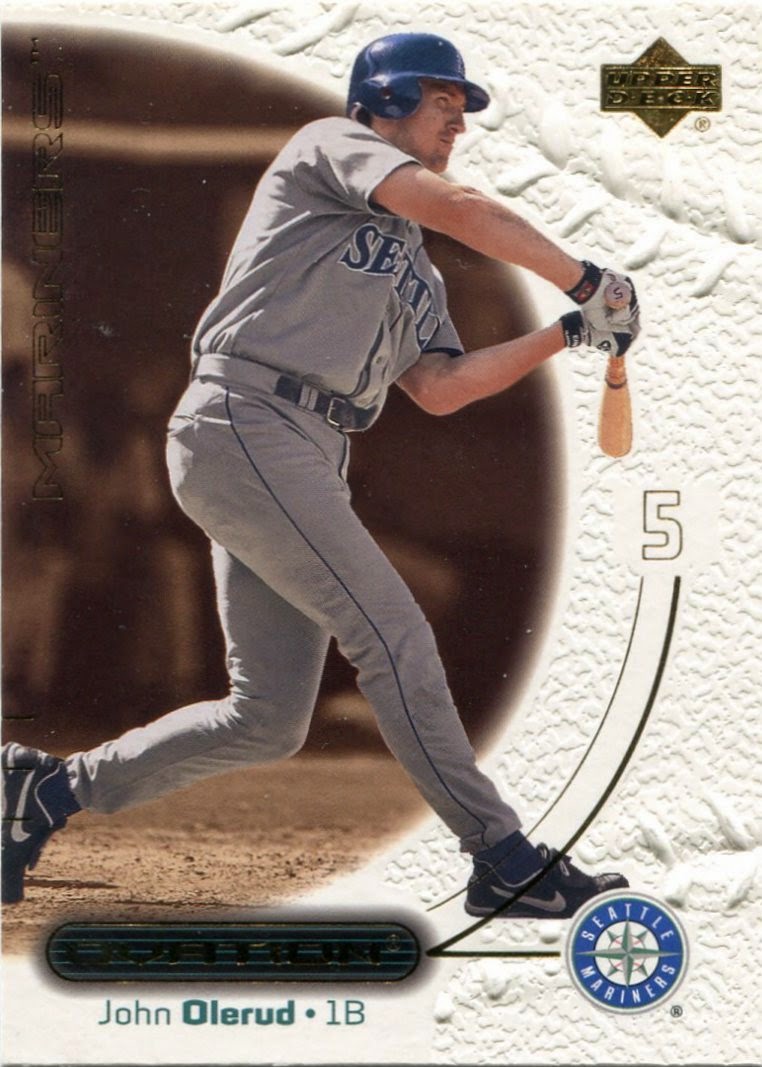 In terms of equipment, card companies have probably gotten the most mileage out of the baseball.

Numerous designs have featured them, including many, many Flagship sets. When you get right down to it, I guess it makes sense. Can't play the game without a ball.

I don't think any brand took the baseball theme further than UD Ovation. The designs never blew me away, but the fact that the textures of most of their designs actually feel like the stitches on a baseball always fascinated me. 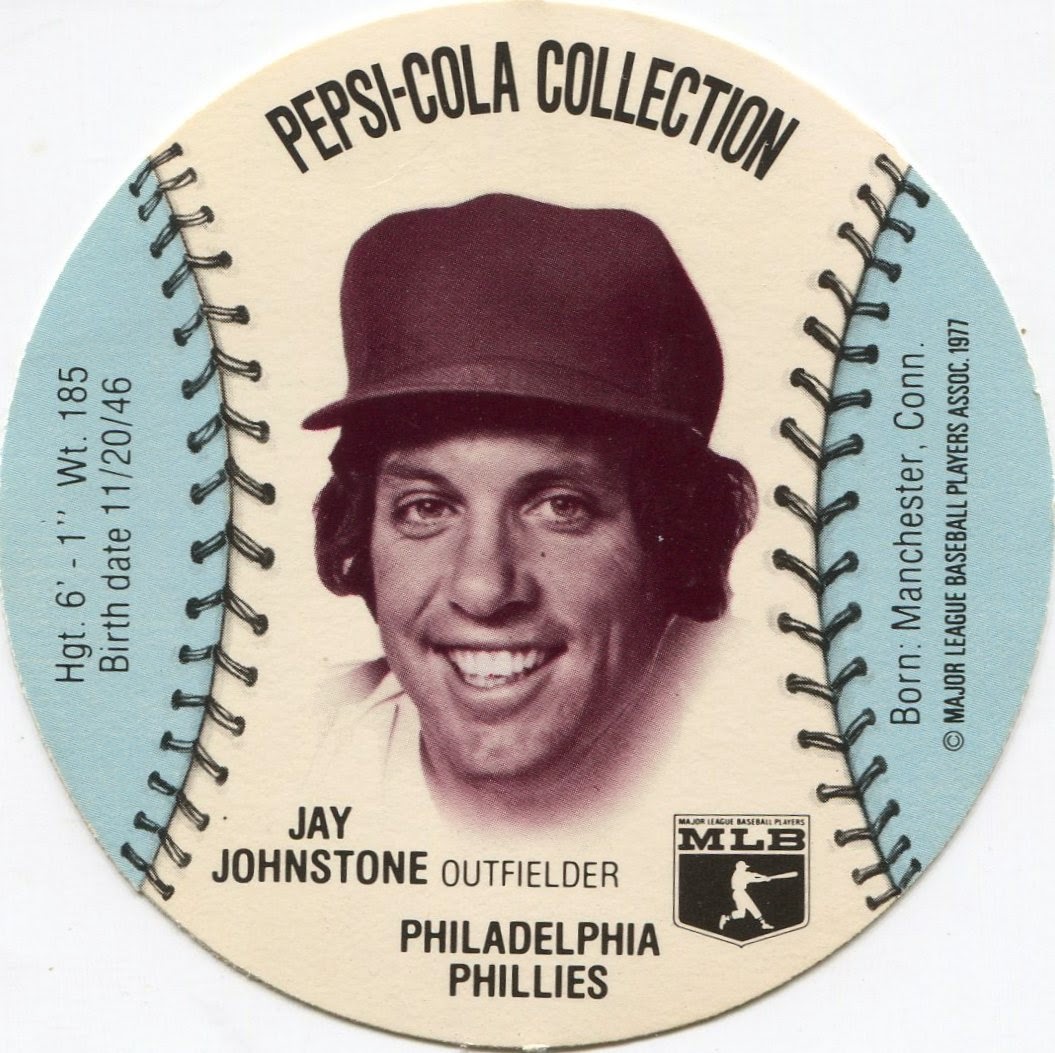 Of course, not many cards can say that they're actually shaped like a baseball.

A few have tried over the years, but I don't think any did it better than the various discs that were released by (seemingly) thousands of different food, drink, etc. chains in the '70s. They don't have the feel of stitching on a baseball, but their round shape gives them the nod over Ovation in my book.

I'm pretty sure other brands have worked equipment into their designs, but I either don't own any of them or just plain forgot while writing this post.

I put a good amount of time in trying to figure out why I enjoy certain designs and dislike others. And, thanks to '81 Topps, I've made a major breakthrough in that area when it comes to equipment on baseball cards.

Early face masks appear somewhat medieval and creepy to me as well and I wholeheartedly agree - Topps 205 is pure baseball. and the Cup Protector design? You may have something there. When these hit the market as relics, we MUST send them all to France...

How about those cards that have the circular baseball card in the mitt?...they're on a stick,right?...ring a bell?

Love the variety of glove inserts from the 90's and of course Upper Deck's baseball embossed Ovation line.