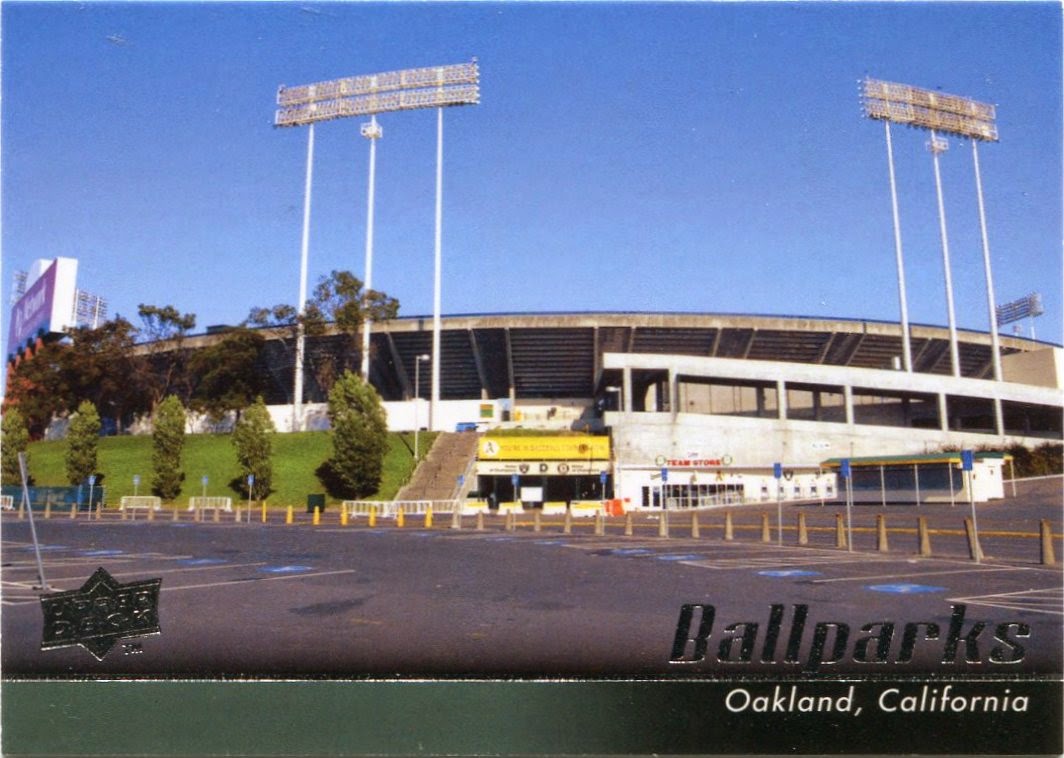 There was a time when I chomped at the bit to blog almost every night.

If I'm being completely honest, I can't say I still feel that way these days. Although I was a little uneasy about it at first, I've come to terms with being a more sporadic blogger.

Don't get me wrong, my love for cardboard isn't diminishing. Neither is my love for blogging, really. It's just not the day-in, day-out thrill that it once was. I don't mind taking a mini-vacation from the blog when I'm not feeling it. (This is my first post since Sunday.)

But, you know, blogging isn't about me, me, me. If it was, I doubt I'd still be here. It's you guys that have kept me coming back for over three years.

I may not blog every day, but I still eagerly check out what others write on a daily basis. 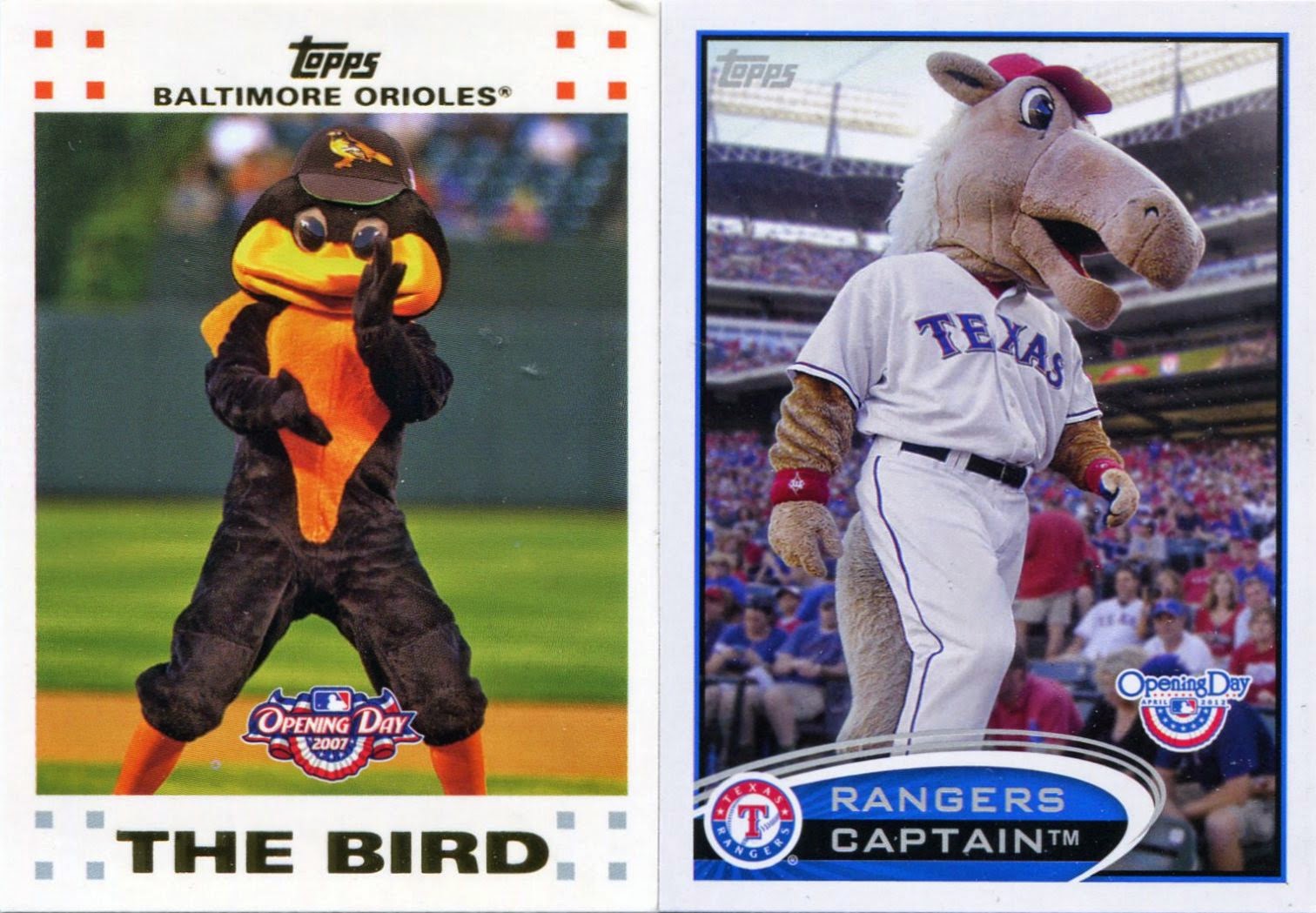 Zach, who you might know as "The Underdog Card Collector," is staying consistent in more ways than one. Not only is my buddy a steady blogger, but he's also a proficient trader. I mean, the guy's sent me four envelopes in the span of about a month.

The first was a small box full of goodies that included the three cards you've seen in this post thus far.

Although stadiums and mascots are always fun... 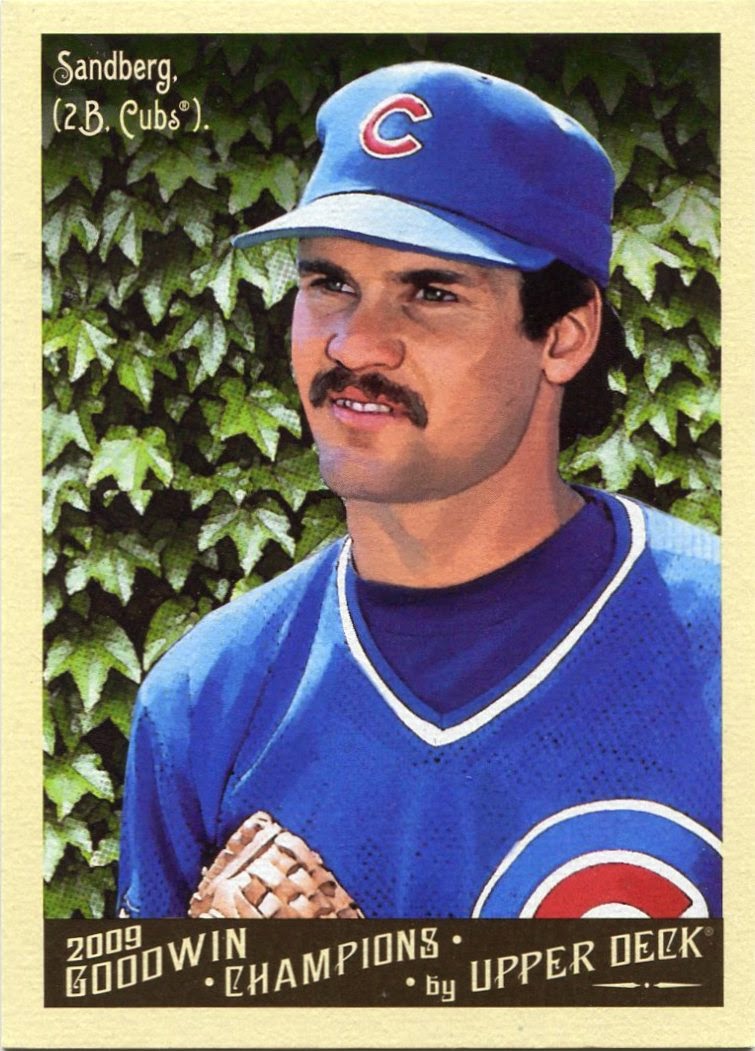 ...the stack of Cubs Zach selected stole the show.

Between Ryno, the ivy, and that deep shade of Cubbie blue, this Goodwin Champions card is just about perfect.

Take out that hideous 'stache and it'd be flawless. 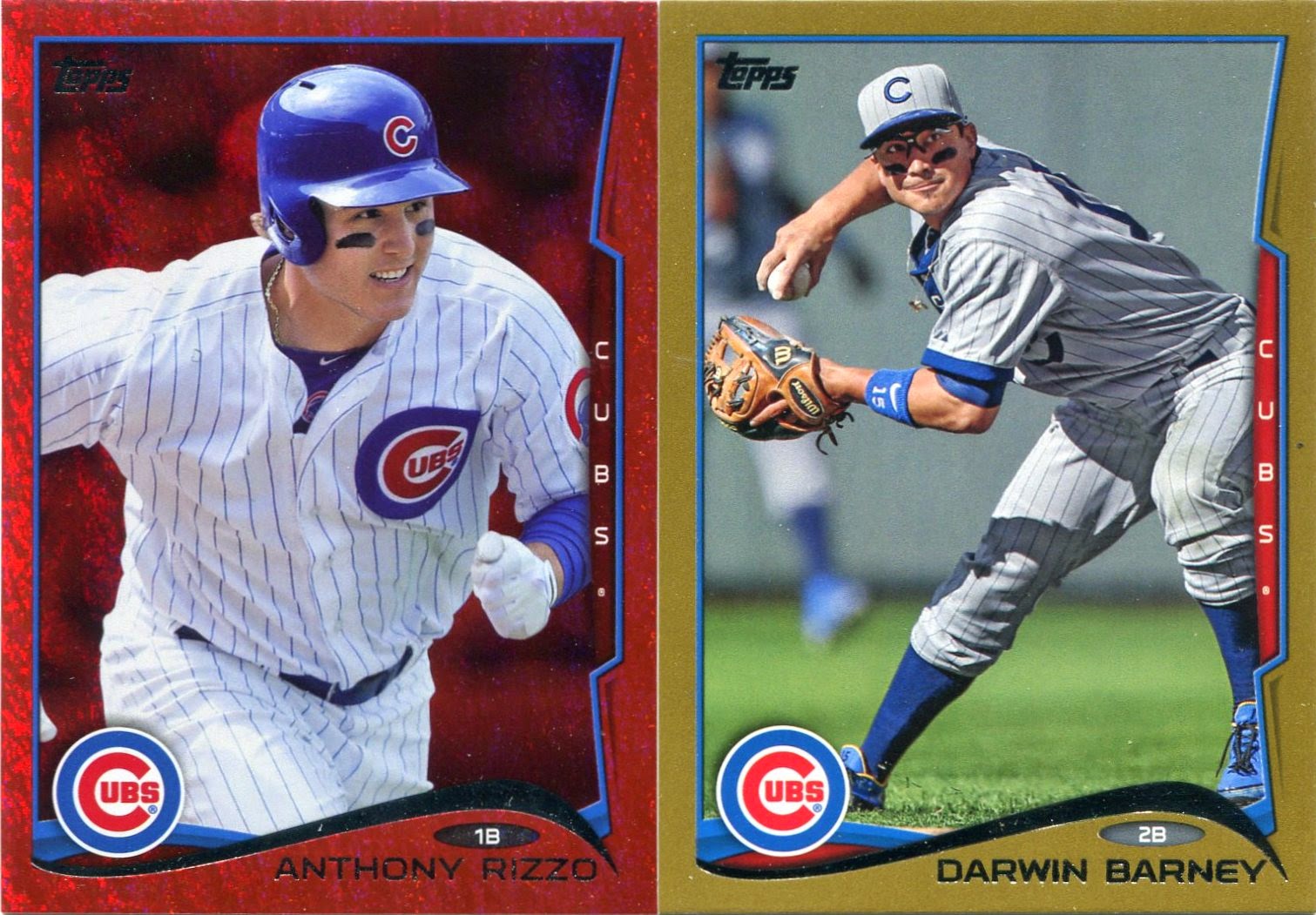 Both of these guys were highly touted youngsters, but only one of them is still a Cub.

Hint: It's the guy without the throwback. 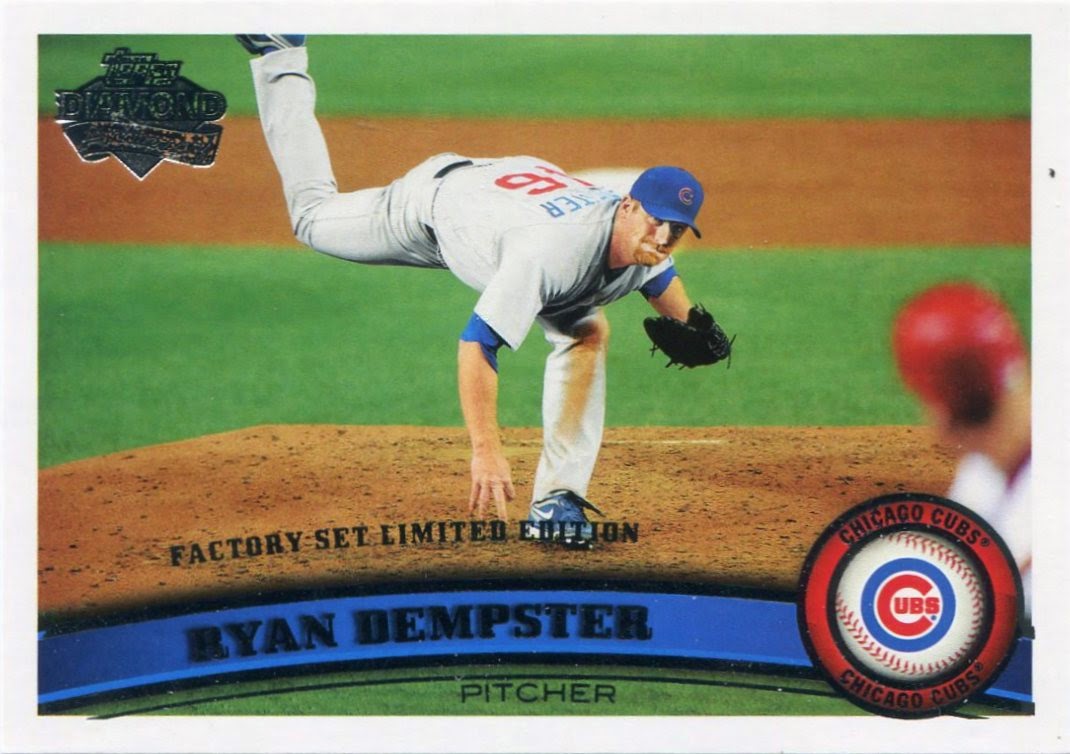 The real jewel of this box was yet to come.

Aside from some additional silver foil, these Factory Set Diamond Anniversary parallels aren't much different than the standard base cards. But, no matter how you slice it, they are different...which means I'm more than happy to add them to my binders.

At first, I thought Zach might've found a small handful of these things for me.

It was the entire... 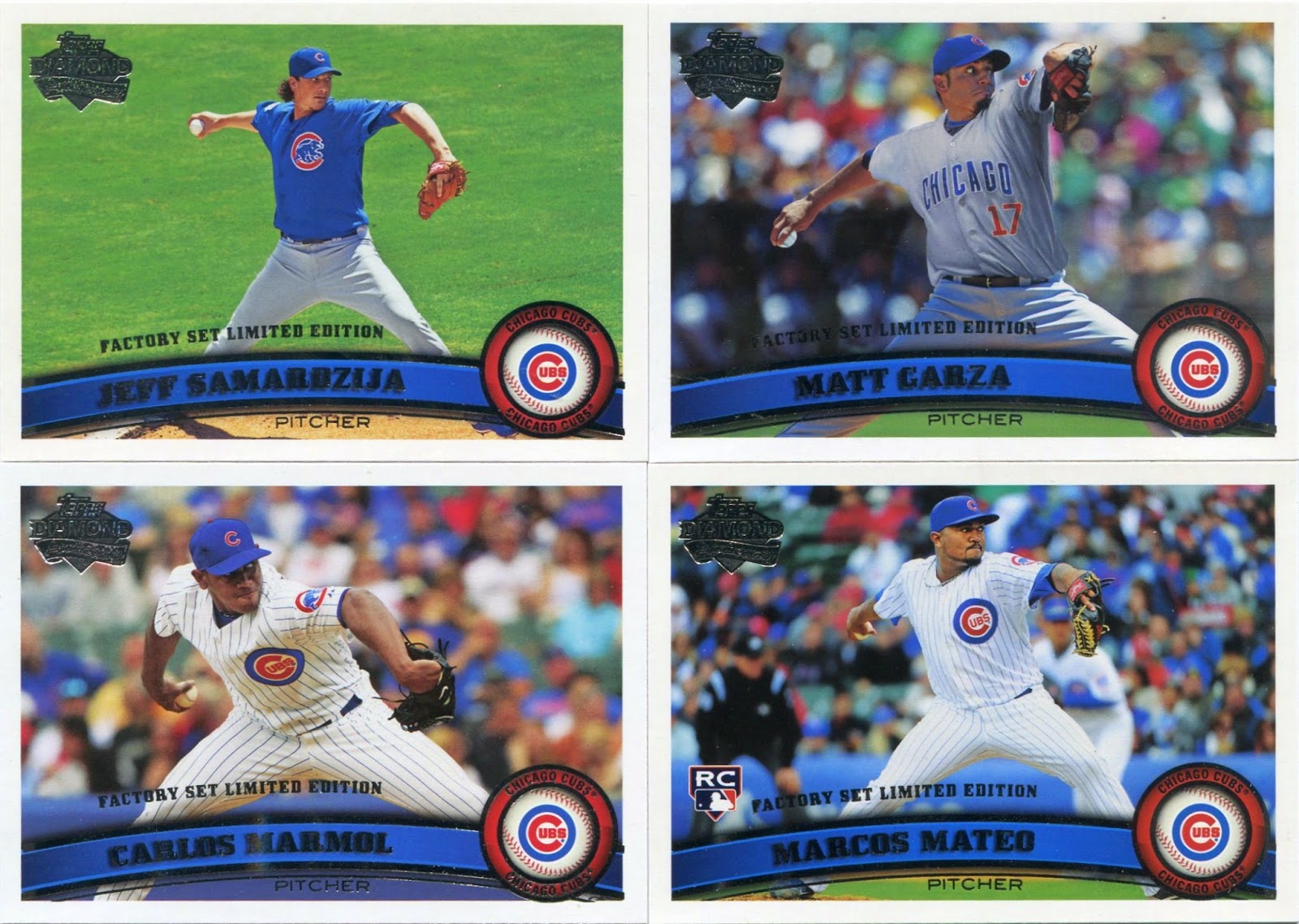 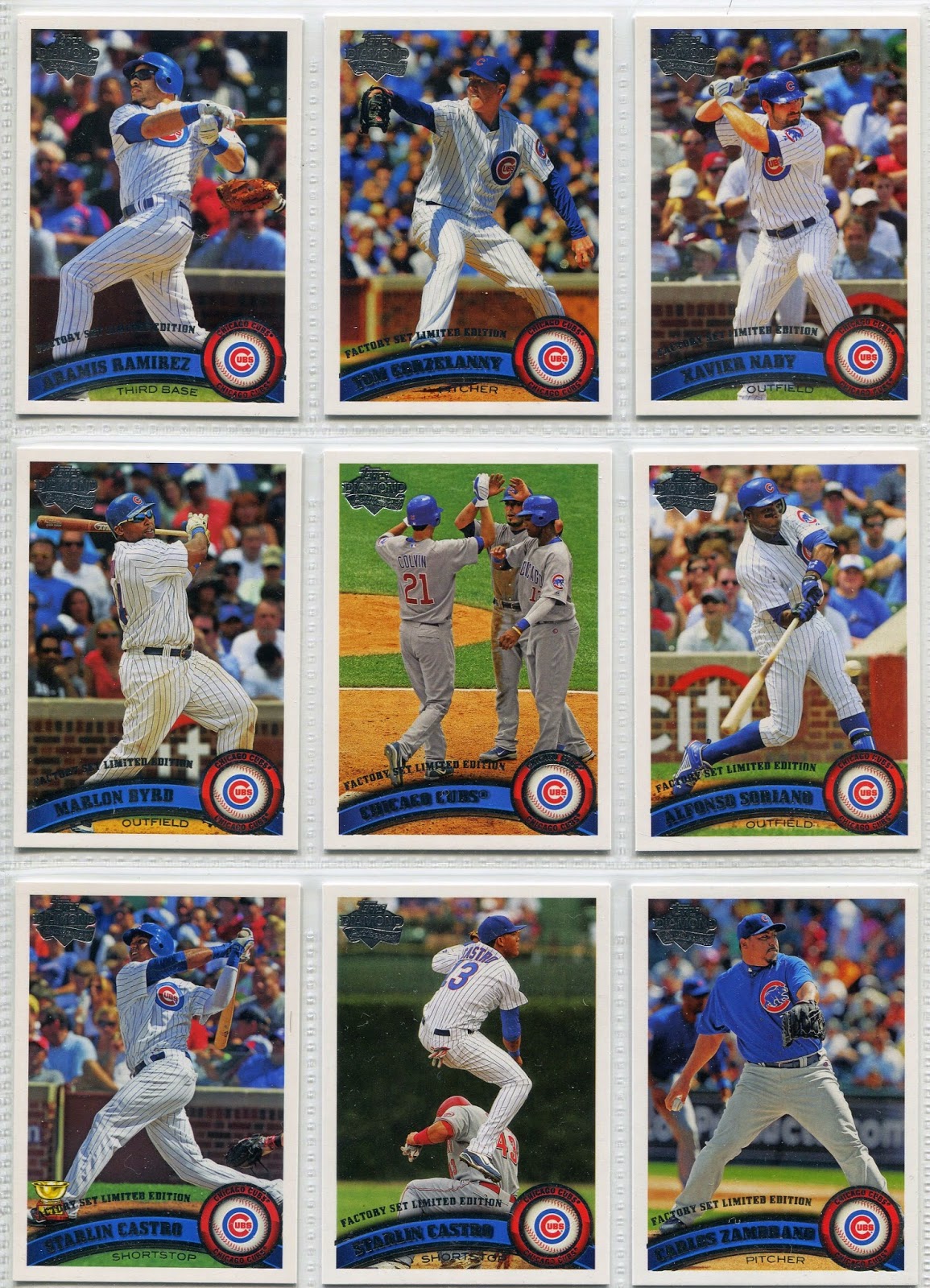 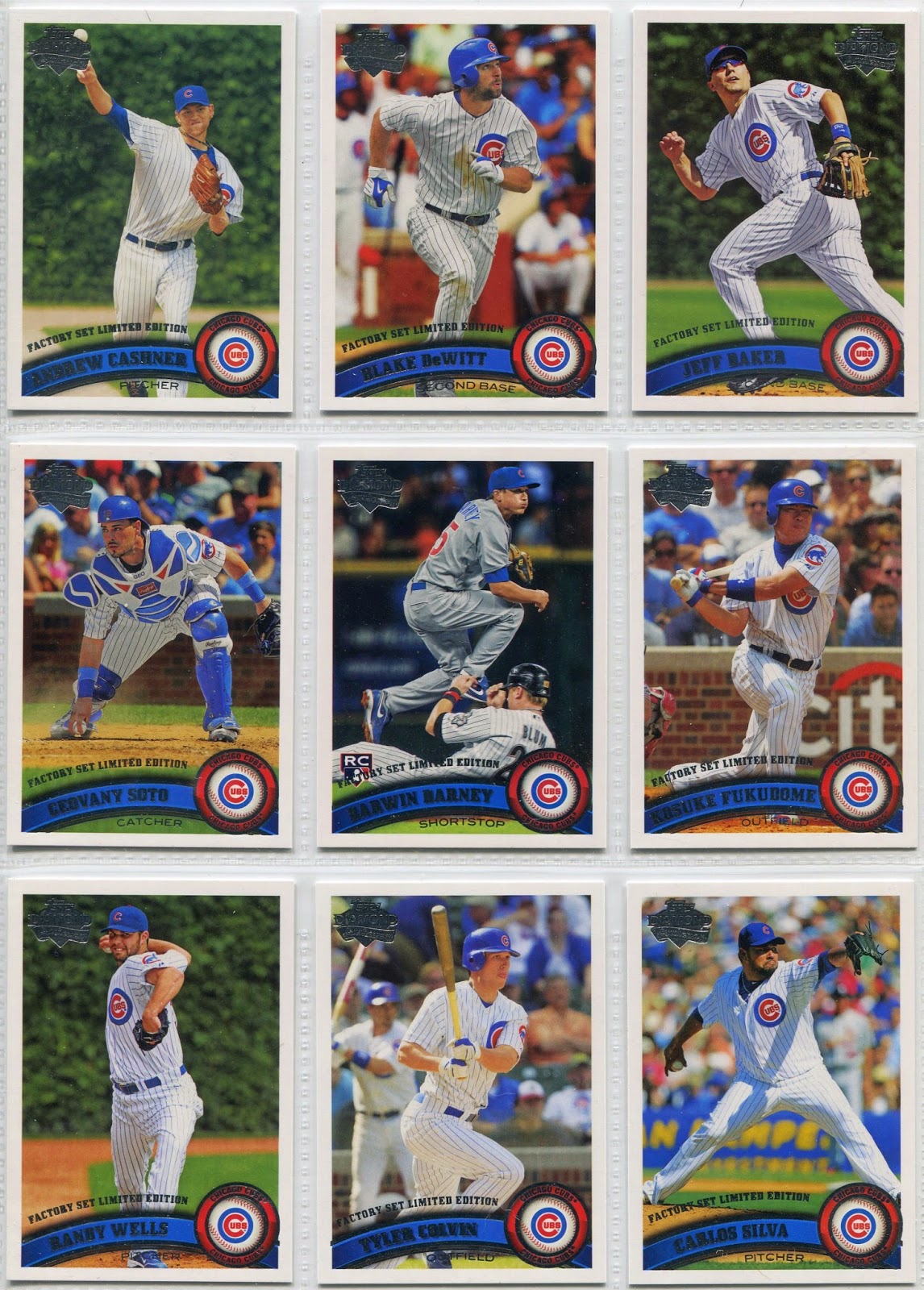 I went from owning exactly zero of these parallels to a couple dozen in the snap of a finger.

How's that for progress? 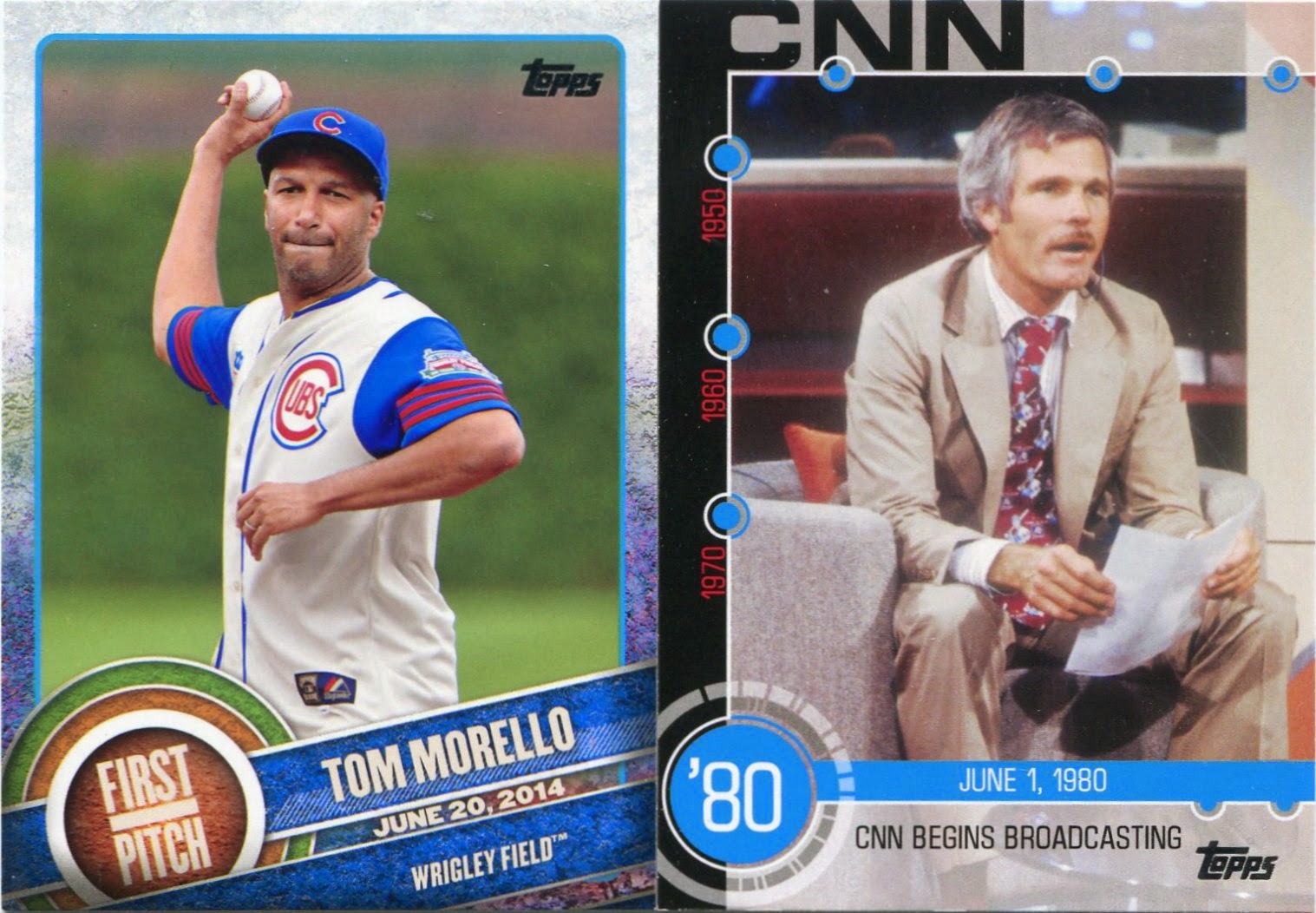 Zach added fuel to the fire by dropping a PWE on me a short while after that gem-filled box.

The envelope hit a couple of my 2015 Topps insert needs and set me a little further down my half-hearted quest to complete the First Pitch set. I can't say I'm much of a Rage Against the Machine fan, but I'm happy to have the Morello regardless.

And, hey, the guy's wearing a throwback jersey. 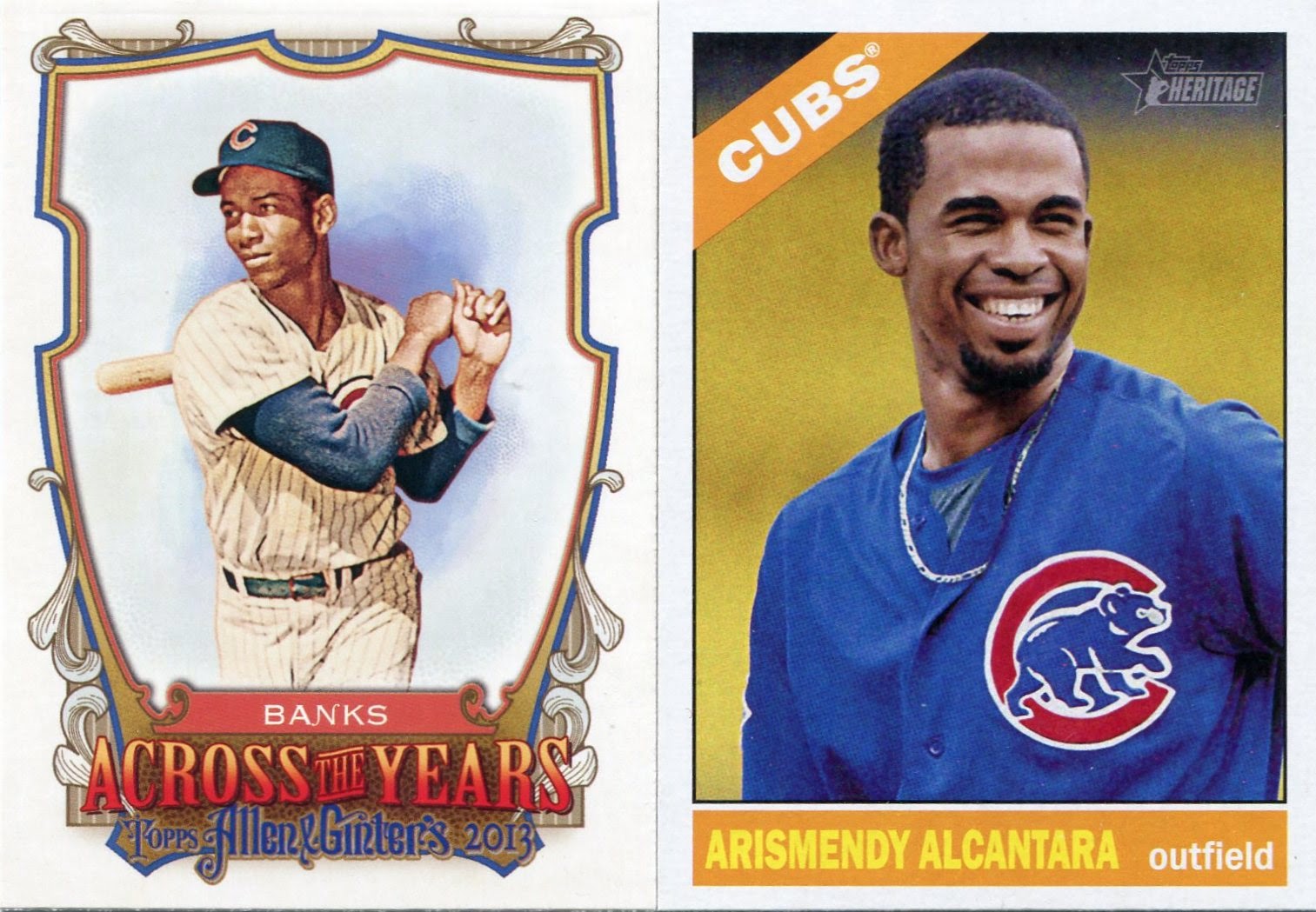 Zach followed that up with another PWE not long down the road.

This one knocked out a few recent Cubs needs of mine, needs which couldn't have been more diverse.

One of these guys is the greatest player to ever suit up on the North Side of Chicago. The other was recently sent down to Triple-A Iowa.

I trust you know which is which. 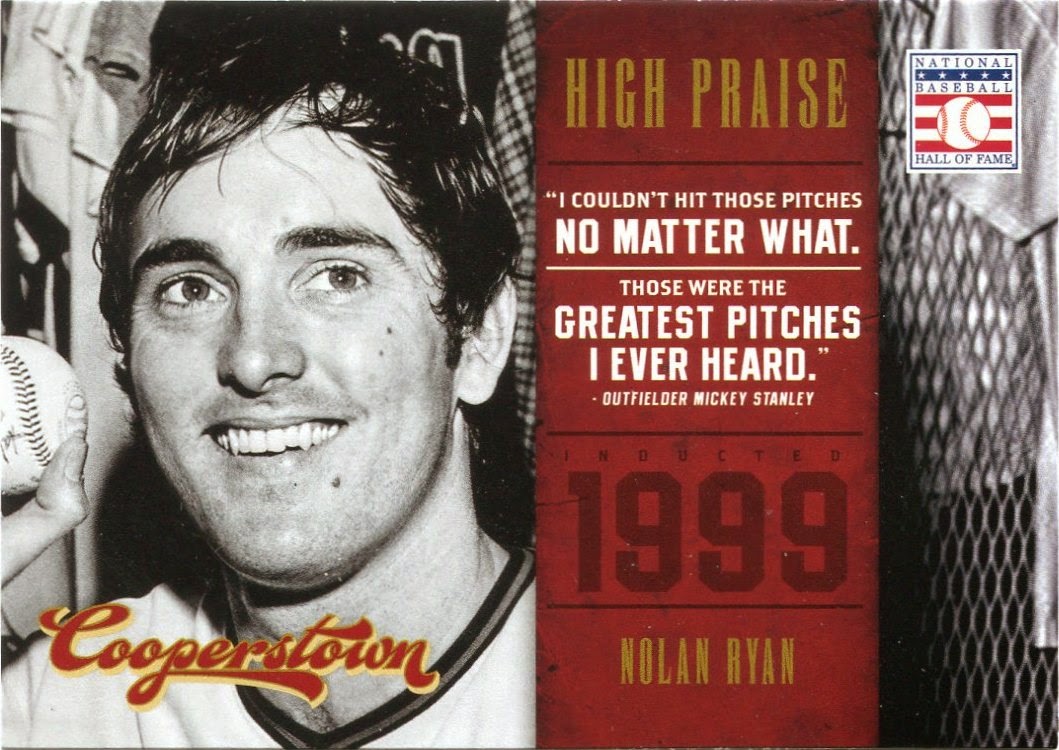 And, last but not least, Zach found time to drop another batch of cards on me just last week.

This spiffy Cooperstown insert of Mr. Express features one of my very favorite baseball quotes. 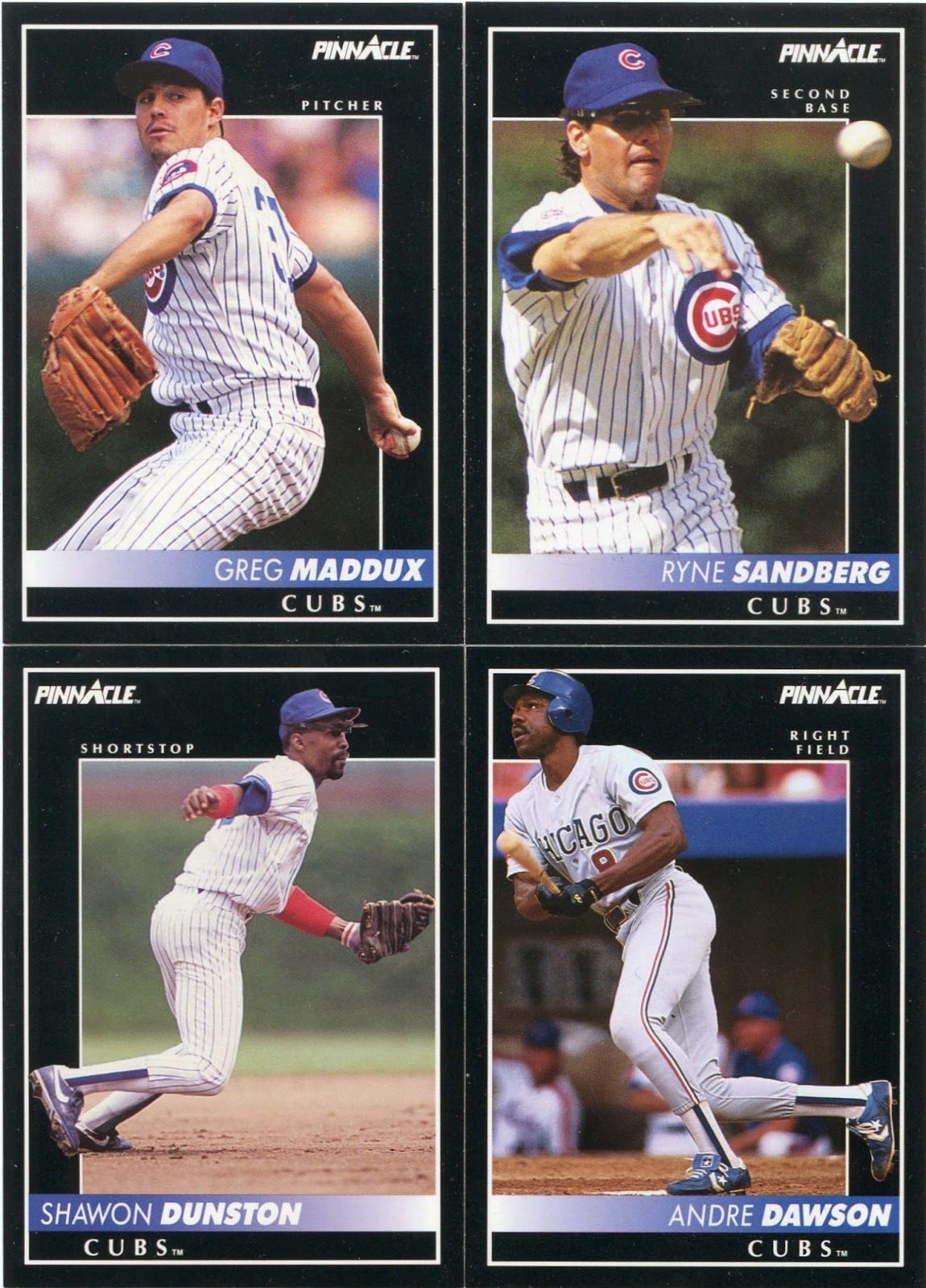 It didn't take long for Zach to get back to the business with the Cubs.

Inside this package was a budding stack of '92 Pinnacle Cubbies. It was the brand's first set, and, design-wise, it's by far their best.

Although I will say that I am glad Pinnacle stuck around until the mid '90s, because they still had a lot of greatness to bestow onto us. 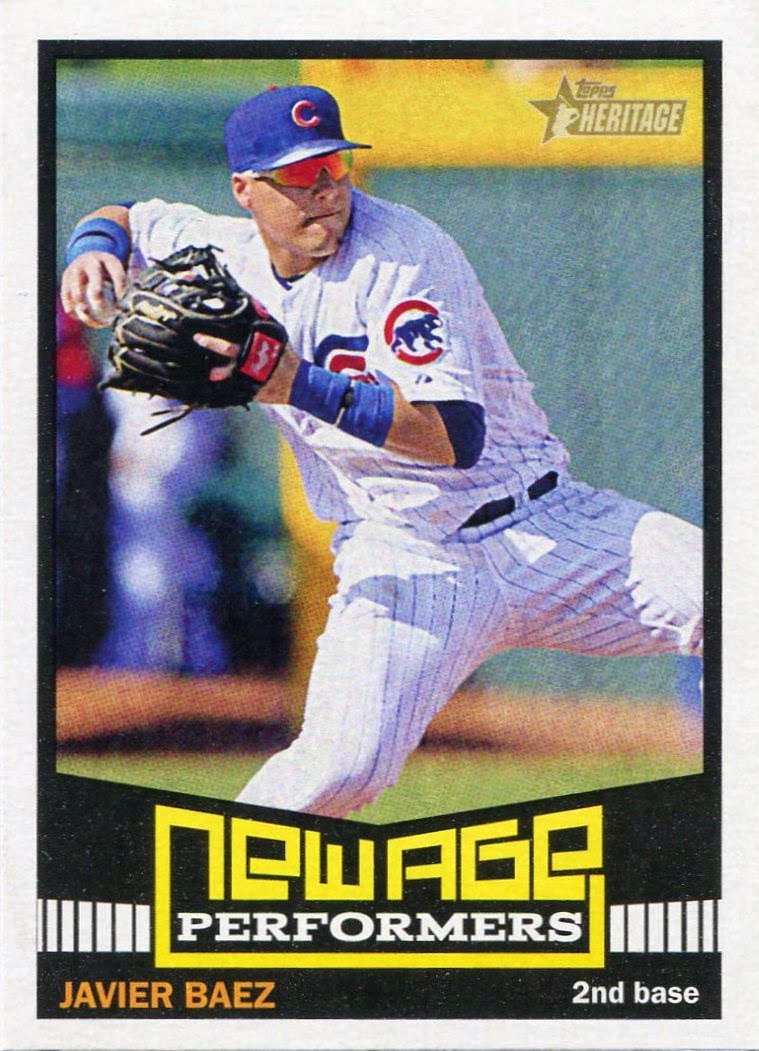 We close things out with a guy, well...a guy who I'm not so sure about any more.

I hate to judge a player on what was basically a late-season call-up, but I have to say that in his brief time in the bigs, Javier Baez had the worst plate discipline of anyone I've ever seen.

Granted, he's still quite young, so I'm far from giving up on him. I'll still be collecting his cards either way, and this Heritage insert from Zach was much appreciated.

And it goes without saying that everything Zach was much appreciated. As long as great people like him are around, I'll still be here. I'm simply not a daily blogger any more, and that's okay. Like the hobby as a whole, I'm not fading away. I'm just changing.

Baez is a guy who I really think people had the wrong kind of hopes for. Looking at his minor league numbers, Baez was always going to be a guy who strikes out a ton and rarely ever walked (his K/9 rate was usually quadruple his BB/9 rate). The thing was that he had a ton of power. .250 ISO in 434 plate appearances power (which is a lot) and he could make frequent contact (his BABIP suggests that his ability to hit the ball is better than those who just look at batting averages would think). Hopefully he can still make a name for himself as the next Alfonso Soriano (so-so defender with boatloads of power but rarely ever takes his walks).

Naturally, I, like the rest of our cardboard hobbyists and blog readers, have noticed that you've scaled back your writing here at The Dimebox. That said, we all need a change of pace -- change is good and change is inevitable -- so I imagine you've stayed in stride, just shifted the trajectory a bit.

Thanks for such a detailed and kind post, Nick! It's been a blast to keep packages and PWEs rolling out of here, at Underdog HQ.

As an aside, yo Zippy Zappy! I've been seeing your name around. We should probably get our first trade going! : D

Zach's been hitting me up big time as well with about 3-4 packages in the last month! I've been feeling terribly guilty that I haven't sent a return package yet, so I managed to find a few Padres at the hobby shop today. Really awesome, generous guy, great cards Nick!

At first glance, I though you stopped by and visited the Bay Area. Those 2010 Upper Deck ballpark cards are cool.

I've noticed your "vacation", and my own selfish thought was "Good, it's not just me." We both started blogging in November, 2011, so maybe it's not coincidence we both needed a break in April, 2015.

I've stepped back from the hobby completely for the last few days, and it's a good thing. Helps to "cleanse the palate" and give one a better perspective.

...But I do have to make a comment about that Goodwin Sandberg... I don't generally like fauxbacco cards, but there's so much to like about that card... even with the mustache.

Nick, your absence hasn't gone unnoticed. How you've managed to blog almost daily while working towards your degree I do not know, except to say youth does have advantages! You have a large fan base - we'll still be around when you do post. Regarding the cards here - I've begun a mini-collection of Ballparks. Those Upper Deck cards started it for me. And the Captain...one of the worst mascots in baseball. Little thought went into his creation, imo. Moose head minus antlers and personality. The Bird wins!

Have a great Summer Nick!!

I think Baez will get a chance again, but not with the Cubs. He will probably be a key piece in a trade to net some pitching.

Zach is a good dude. He has been working overtime with all the trade packages.

I don't think I've traded with Zach yet, though that is almost certainly my fault for not commenting enough or seeking out such a trade.

As for your absence from blogging, Nick, I think you have it wrong in that blogging is definitely for yourself as much as it is for your readers. If you're not feeling inspired, or if you start viewing blogging like a job, you'll start to hate it and not want to do it. After all, this is all about a hobby. It's supposed to be fun.