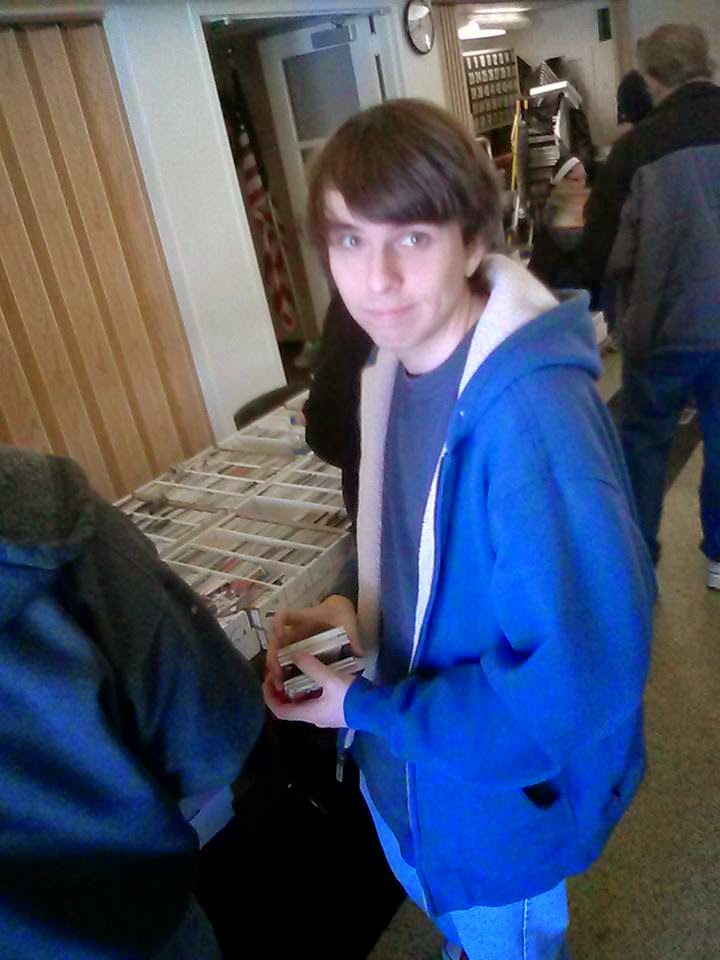 As I mentioned on Saturday, I hit a card show yesterday.

My parents floated me a few extra bucks for my birthday last week, and I used it to treat myself to a much-needed cardboard extravaganza. Dad and I hopped in the car and made the hour-long drive south to hit a local show yesterday afternoon. (Can an hour drive be considered "local"?)

It was an especially fun experience for me because I got to meet up with Jeff from "2x3 Heroes" once again. Jeff's a great guy, and it was awesome to compare our respective card show experiences. We swapped cards (more on those in a later post) and he, my dad, and I grabbed a bite at Portillo's afterwards. (I'm still salivating over that Italian beef sandwich.)

Still, when you get down to it, the cards are what bring us all together in the first place. Yesterday did not disappoint, as I came home with a heavy bag filled with over 800 brilliant pieces of cardboard.

A good amount of those came from those nickel boxes you see behind yours truly there. 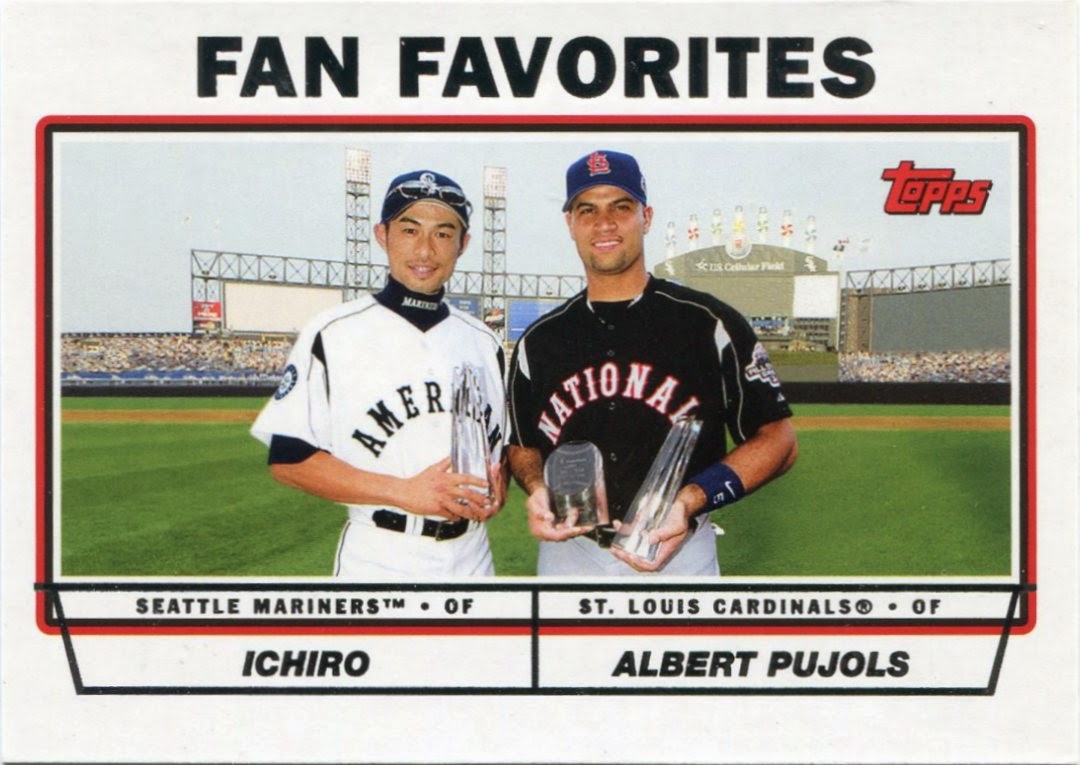 Jeff was actually the one who scoped out the guy's table, but I honestly didn't believe him when he first told me. I had to see for myself. But, true to his words, there it was. A whole table full of nickels. The vendor had at least ten 3200-count boxes filled to the gills with nickel baseball cards.

I was about five boxes deep and was still going strong when the guy announced that he was packing up for the day. In hindsight, I guess it was a good thing. I could've easily spent another hour at that table without even thinking, but that wouldn't have left much time to check out the rest of the show.

So, although I'm sure there were a bunch of hidden treasures in what I didn't get to look through, I couldn't have been happier about the 260-ish nickel cards I found, mine for a meager thirteen bucks.

These nickel boxes were better quality than most dime, quarter, or maybe even fifty-cent bins you'll find. Contrary to how you might picture nickel cards, there wasn't a sniff of 1989 Bowman or 1991 Donruss to be found in them.

The "award show" card you see above is actually a "Cards Your Mother Threw Out" reprint, but it has me inspired to pick up the real thing. 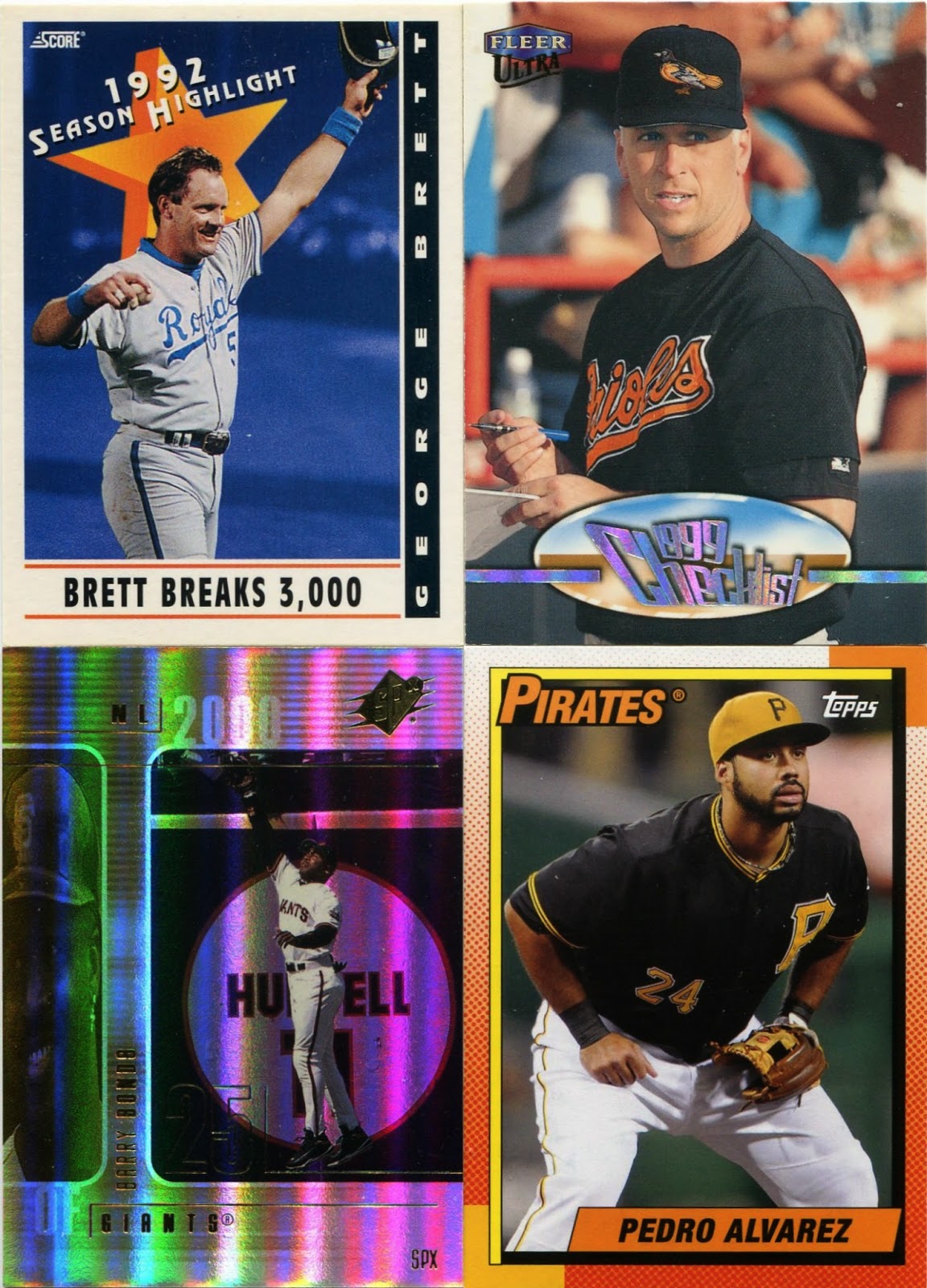 If the Ichiro/Pujols was any indication, this guy's nickel cards didn't slouch when it came to mini-collections.

My 832 different themes benefited greatly from this dig. 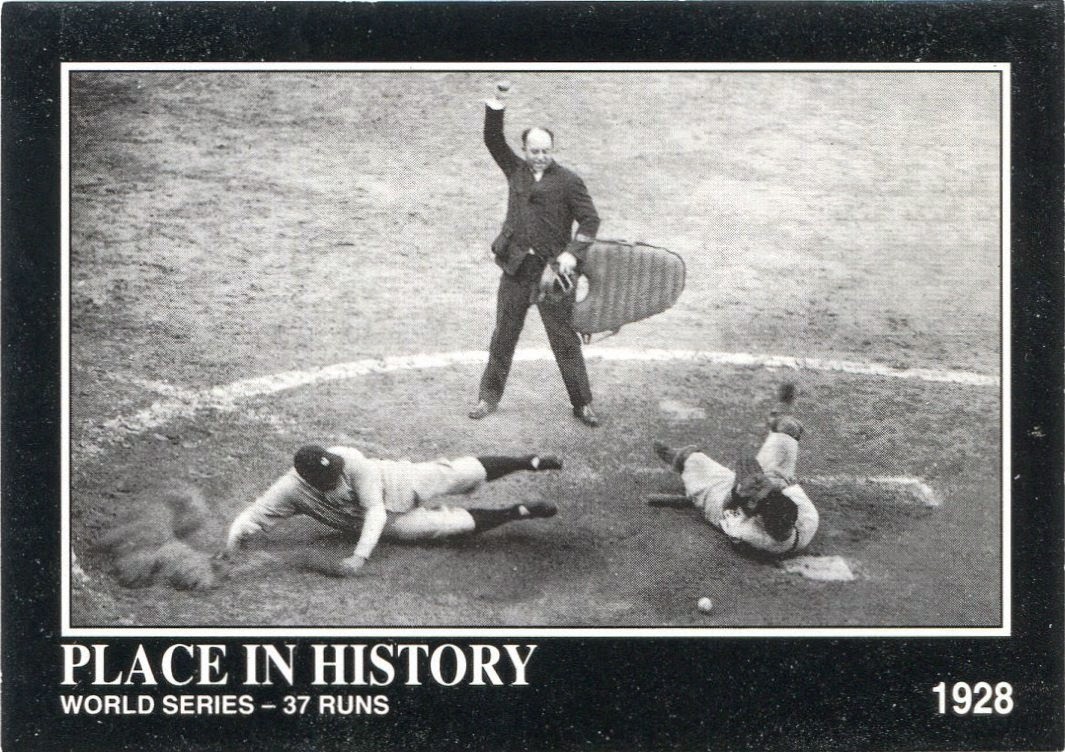 This has to be one of the most picturesque plays at the plate out there.

Still, despite the emphatic out call, The Babe sure looks safe to me. Looks like he knocked the ball free from the catcher's grasp.

Maybe it's time we got that ump some glasses. 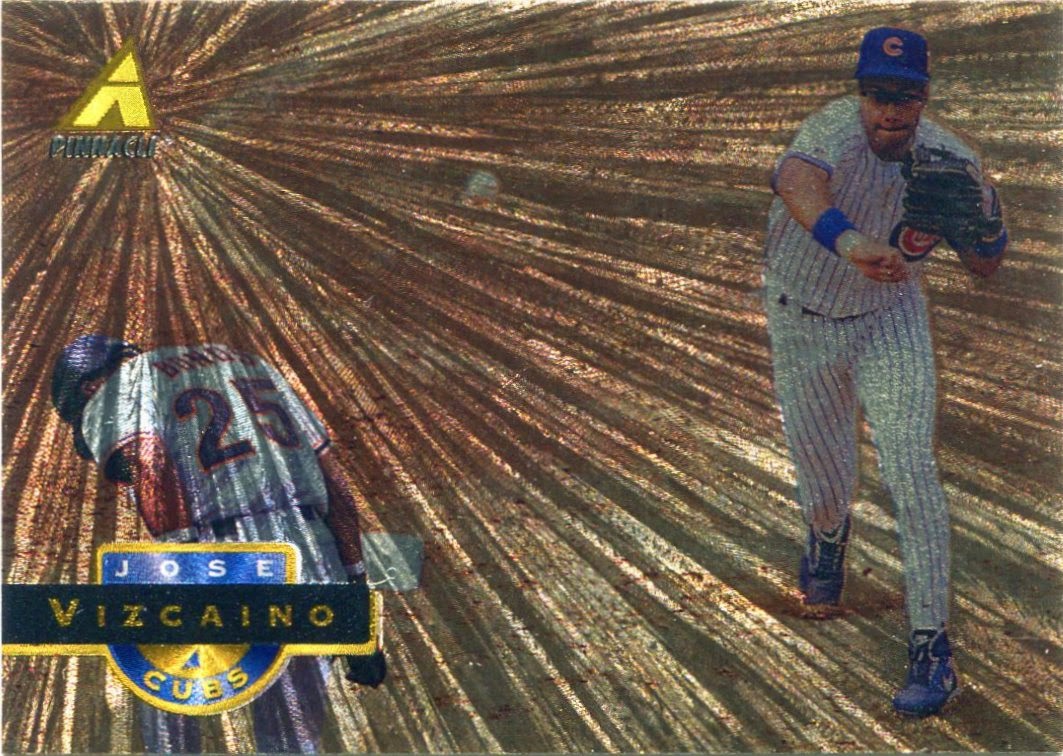 If you look at this card closely enough, you might see a sailboat.

Back when parallels were more than just colored borders. 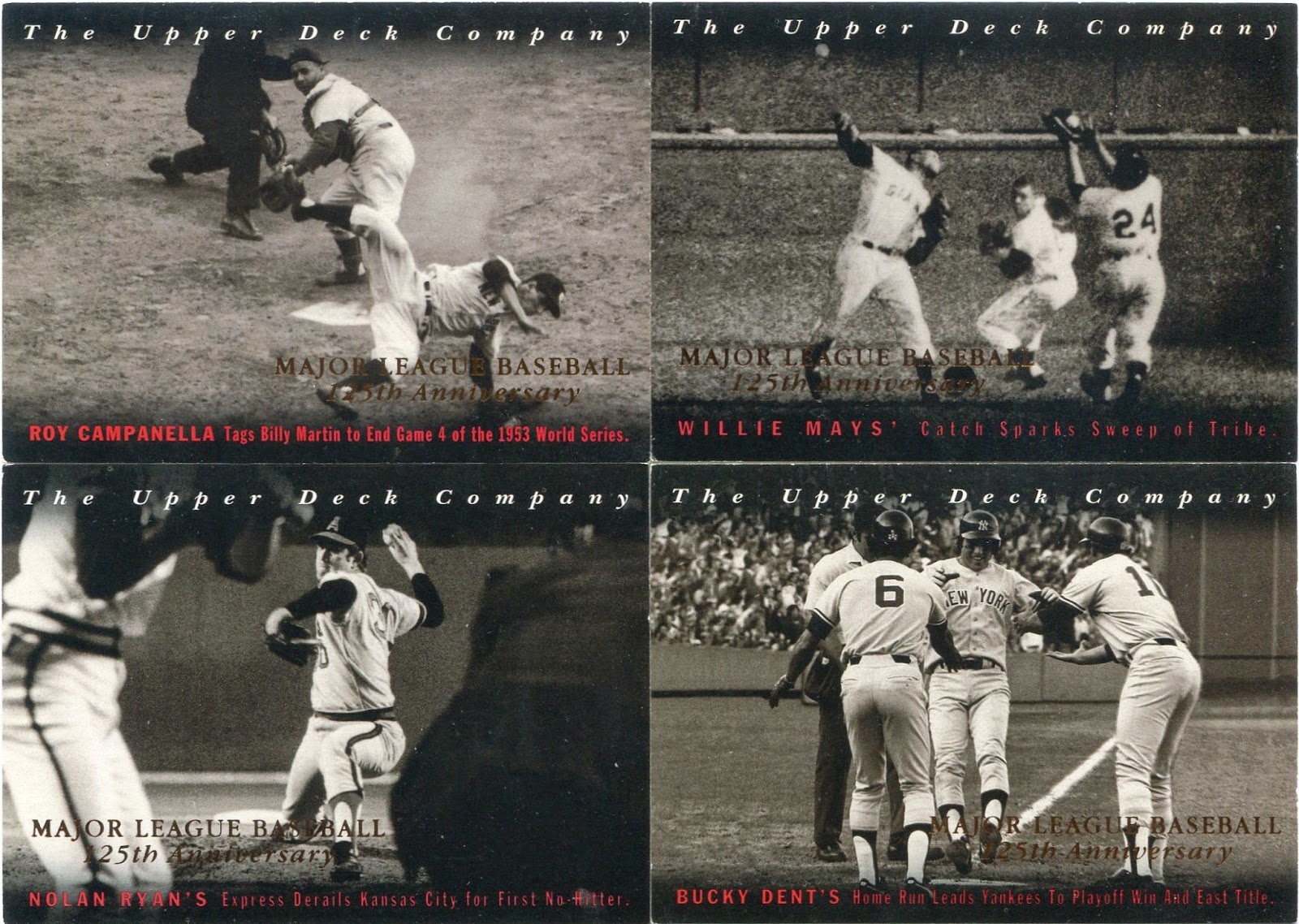 All of these nickel boxes seemed to have an acute case of parallel-itis.

Hey, that's heaven for someone like me. These 125th Anniversary foil parallels from 1994 UD All-Time Heroes allow me to enjoy one of my favorite sets even more.

This is one of those things that I could never explain to a non-collector. You mean a card is different if it has one of those little gold stamps on it? 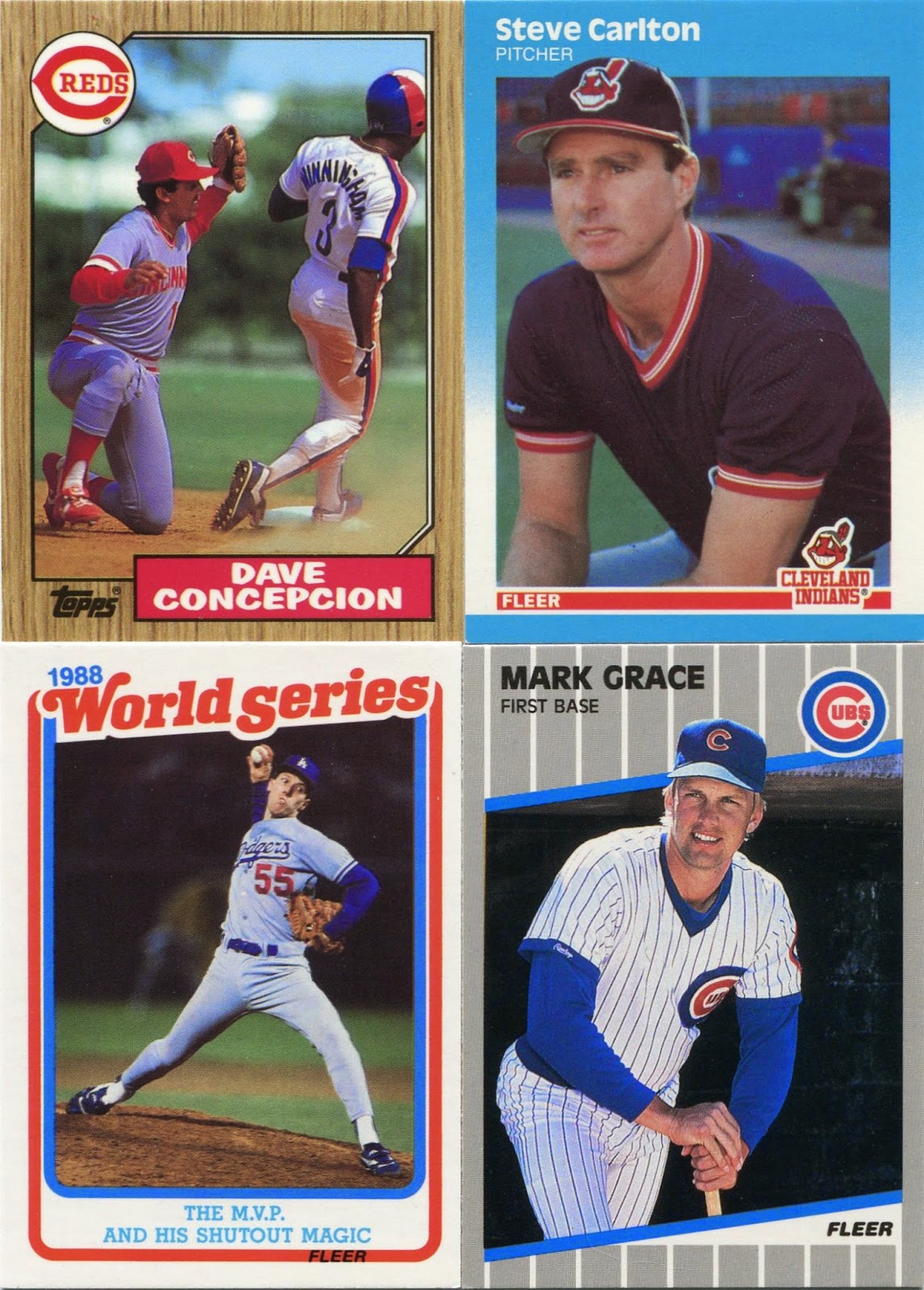 Parallels as far back from the '80s could be found for mere nickels.

It's tough to tell from the scan, but these are just a portion of the Topps Tiffany/Fleer Glossy singles I nabbed from the nickel boxes. I have a hard time finding these things anywhere, and they're easy to miss when skimming through thousands of cards.

Another win for the nickel boxes. 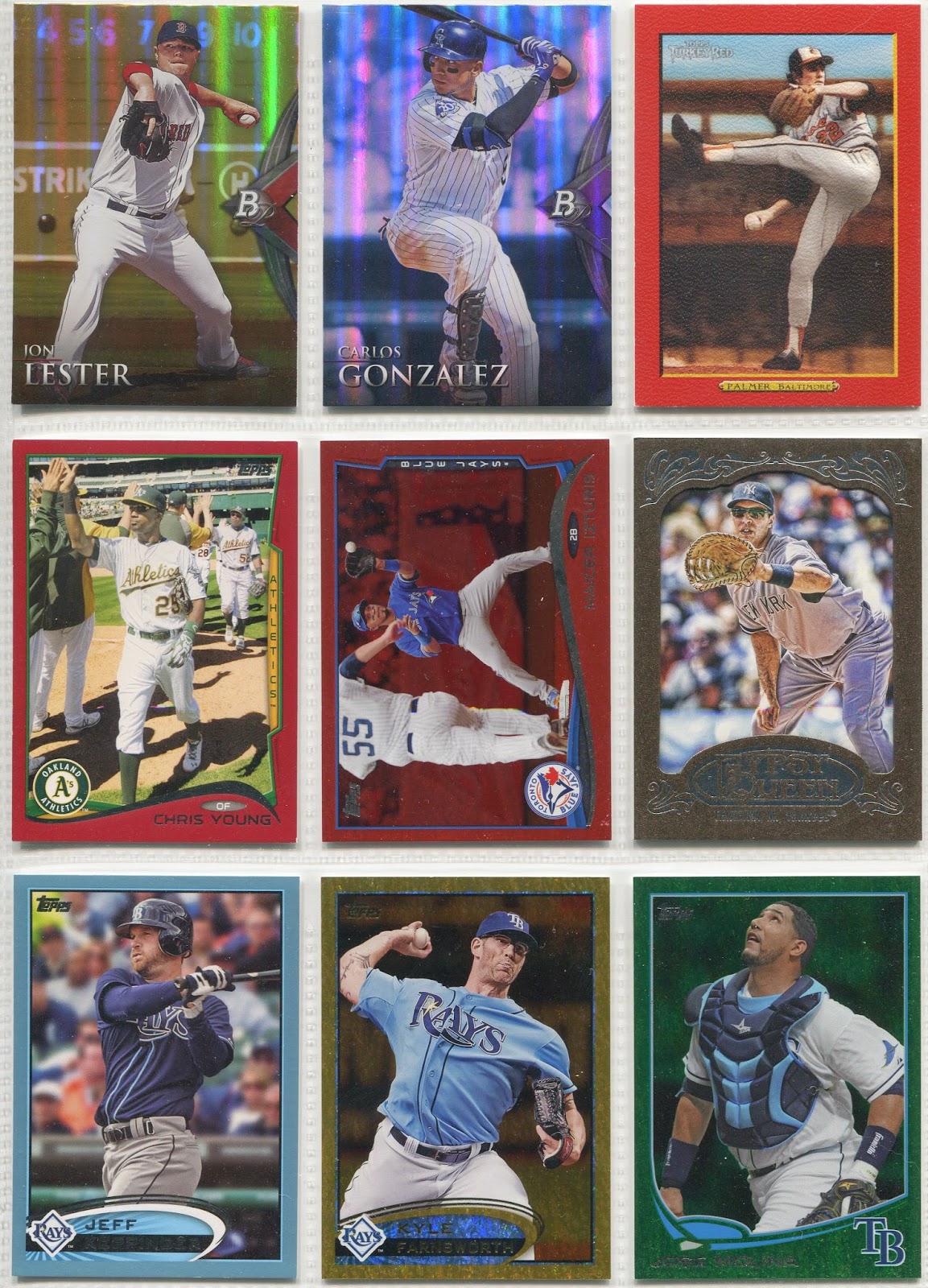 One of the most defining features of these nickel boxes was the fact that they somehow held a lot of more recent cards as well. I found a good amount of 2014s during my dig, something which I certainly wasn't expecting. Parallels from sets like Turkey Red and Gypsy Queen made a couple cameos as well.

It's a bit hard to believe that this whole page cost just 45 cents total. 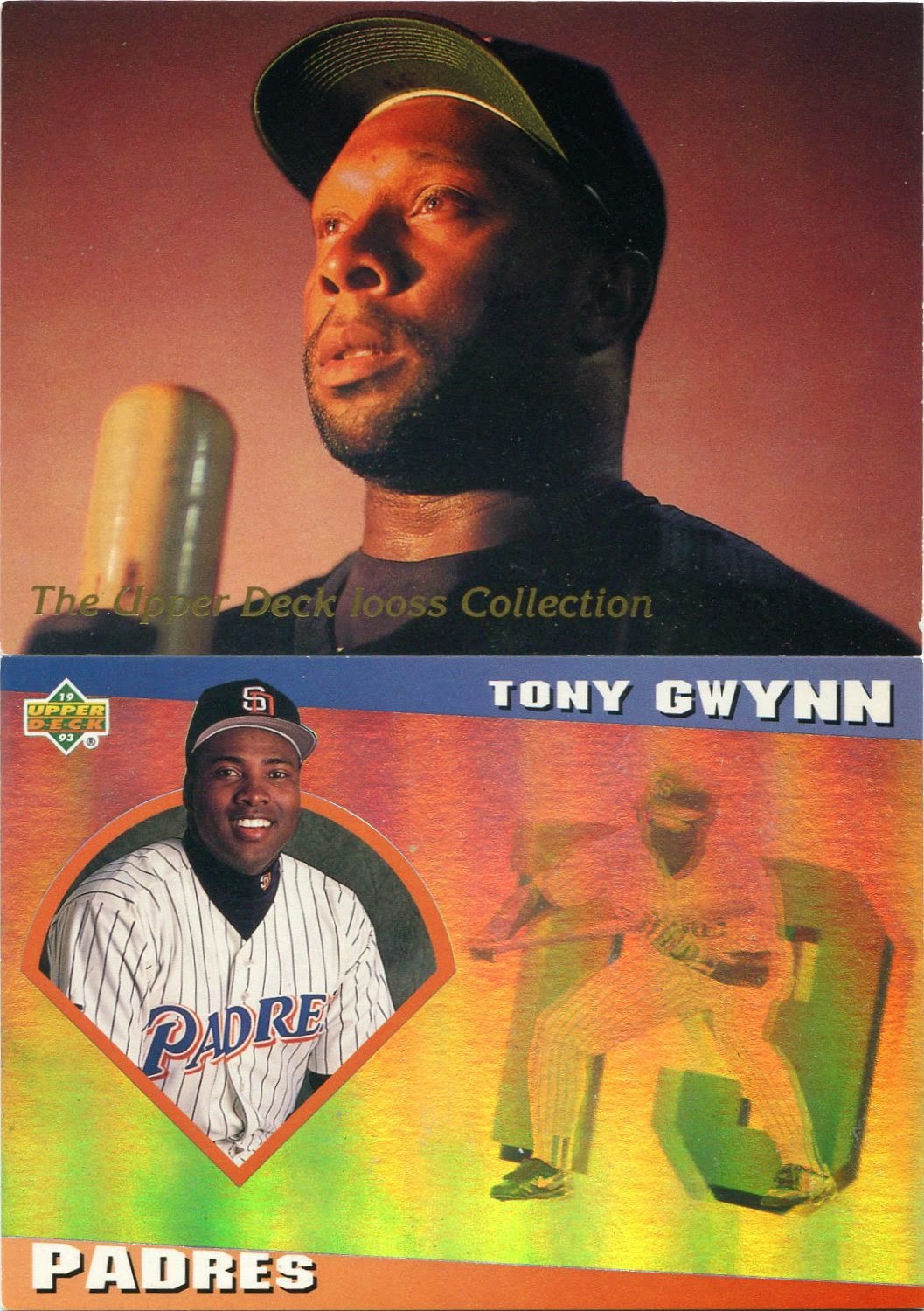 But the beauty of the nickel boxes went way beyond mere parallels.

Some cards are beautiful all on their own. 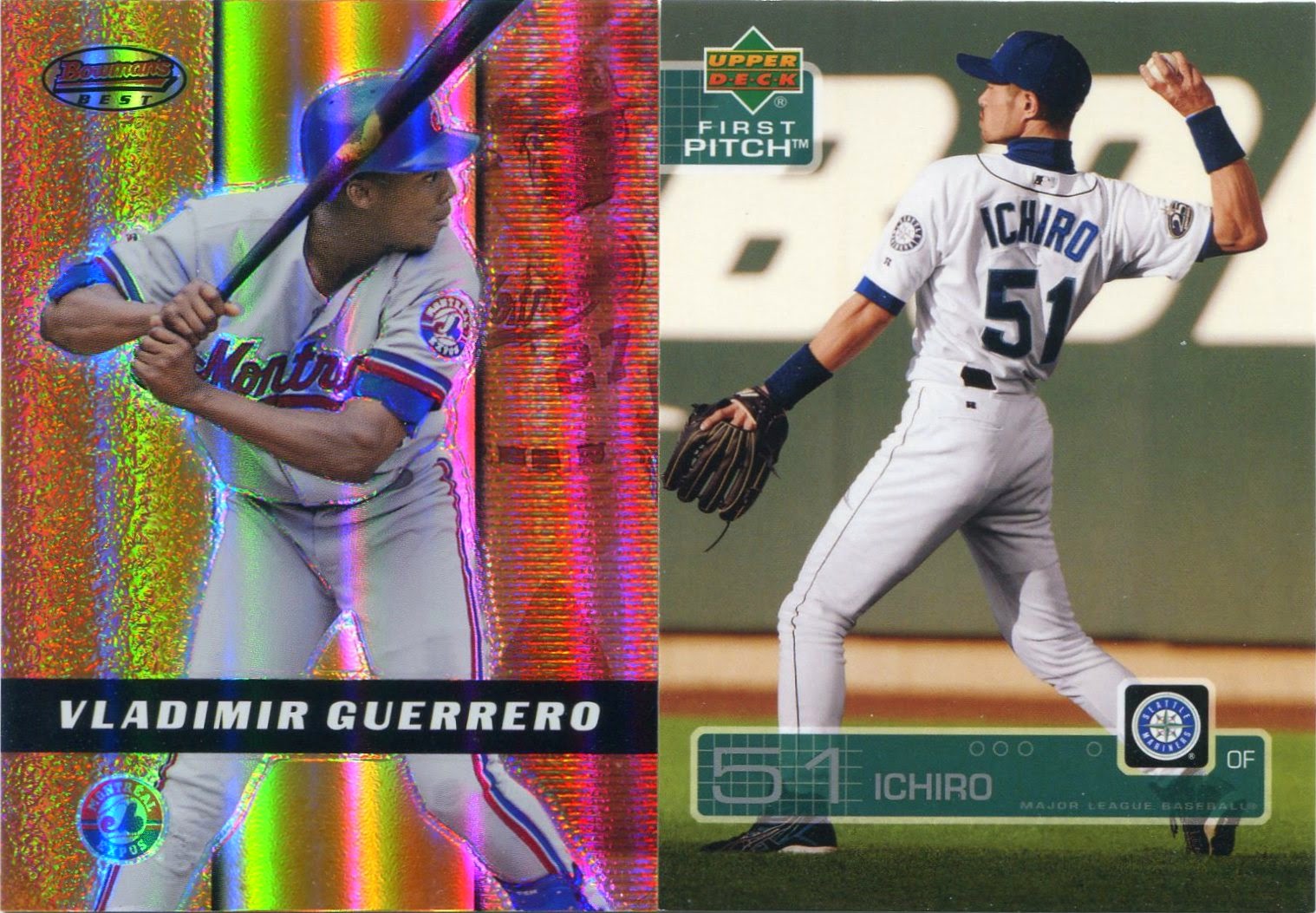 I think my favorite thing about digging through cards with Jeff was the fact that we were constantly asking each other whether we needed this card or that one.

Every time he came across a Vlad or Ichiro card, he'd give me a nudge and show it to me. I did the same whenever I found a bunting shot or any cool White Sox. And, anytime I happened to stumble upon anything especially fantastic, I'd turn around and show it to my dad.

I had support from every possible angle yesterday. 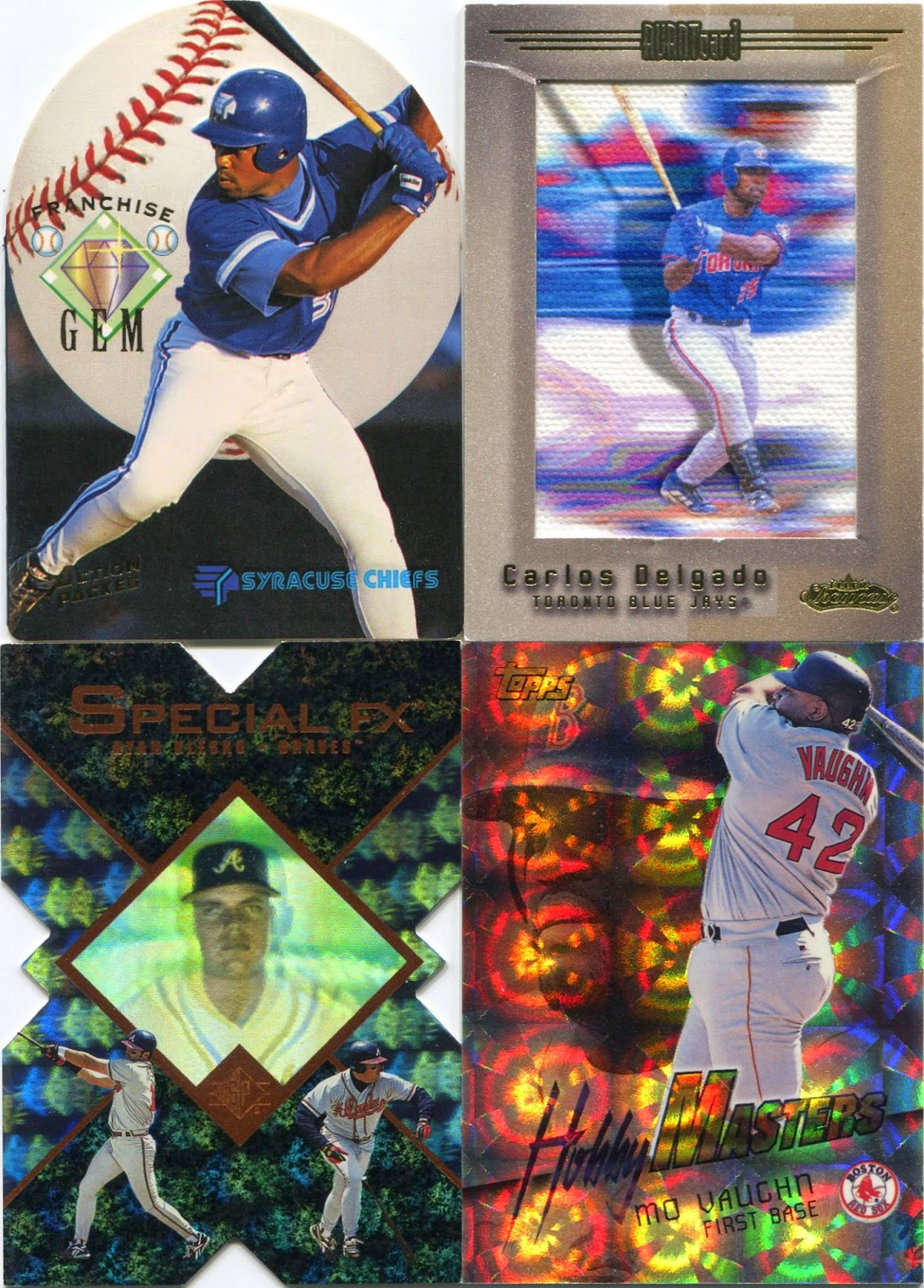 I'll never know what card companies were thinking during the '90s.

Only rampant drug use can explain designs like these. 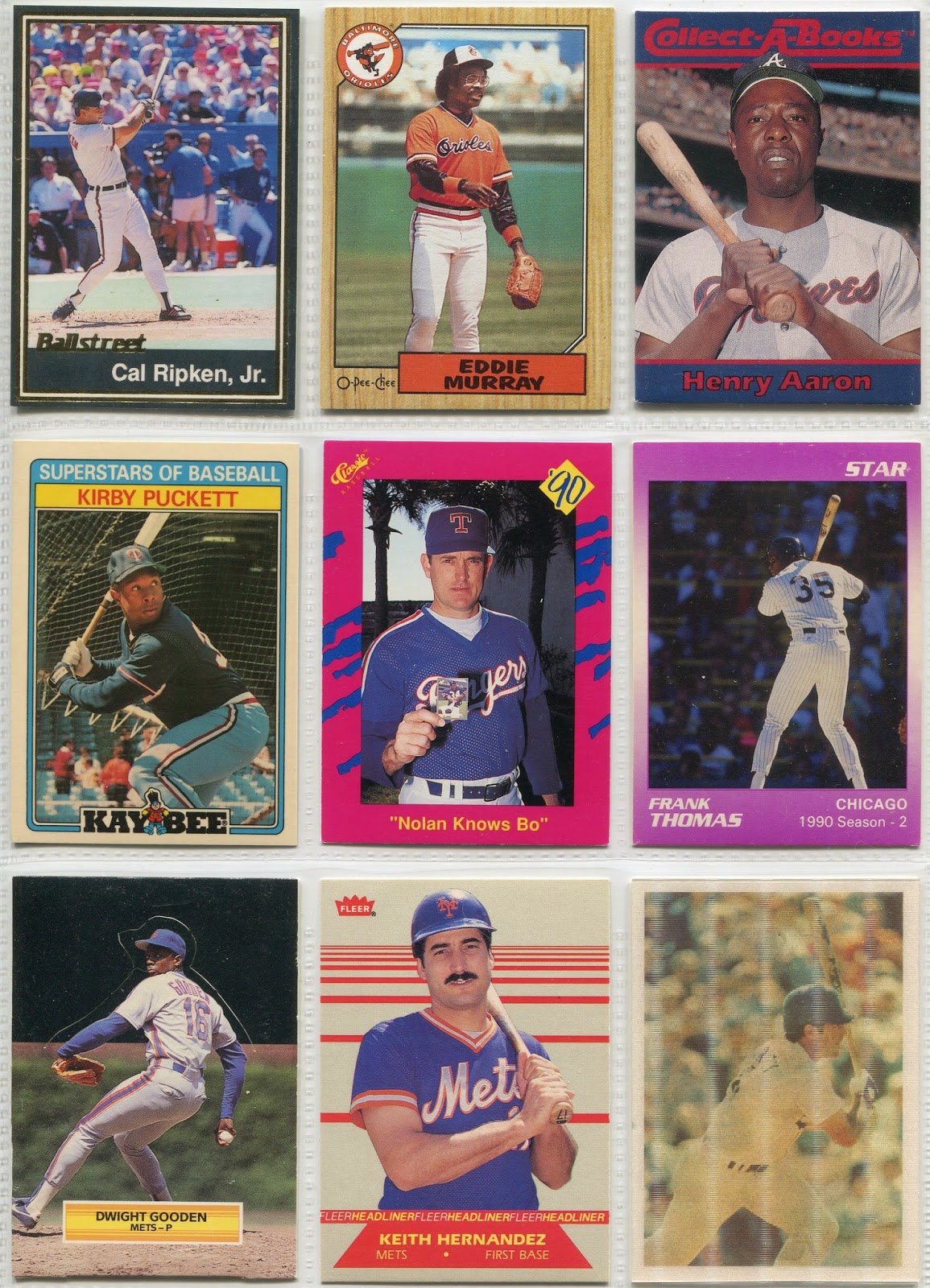 As is the case with any good discount bin, this nickel box offered up a healthy assortment of oddballs.

Ballstreet, O-Pee-Chee, Kaybee...you'll find a little of everything here. I think one of my favorites is that Nolan Ryan in the center. He's holding a card of Bo Jackson with the caption "Nolan Knows Bo." It was one of the first cards I found from these nickel boxes.

In a way, I guess it foreshadowed what was yet to come... 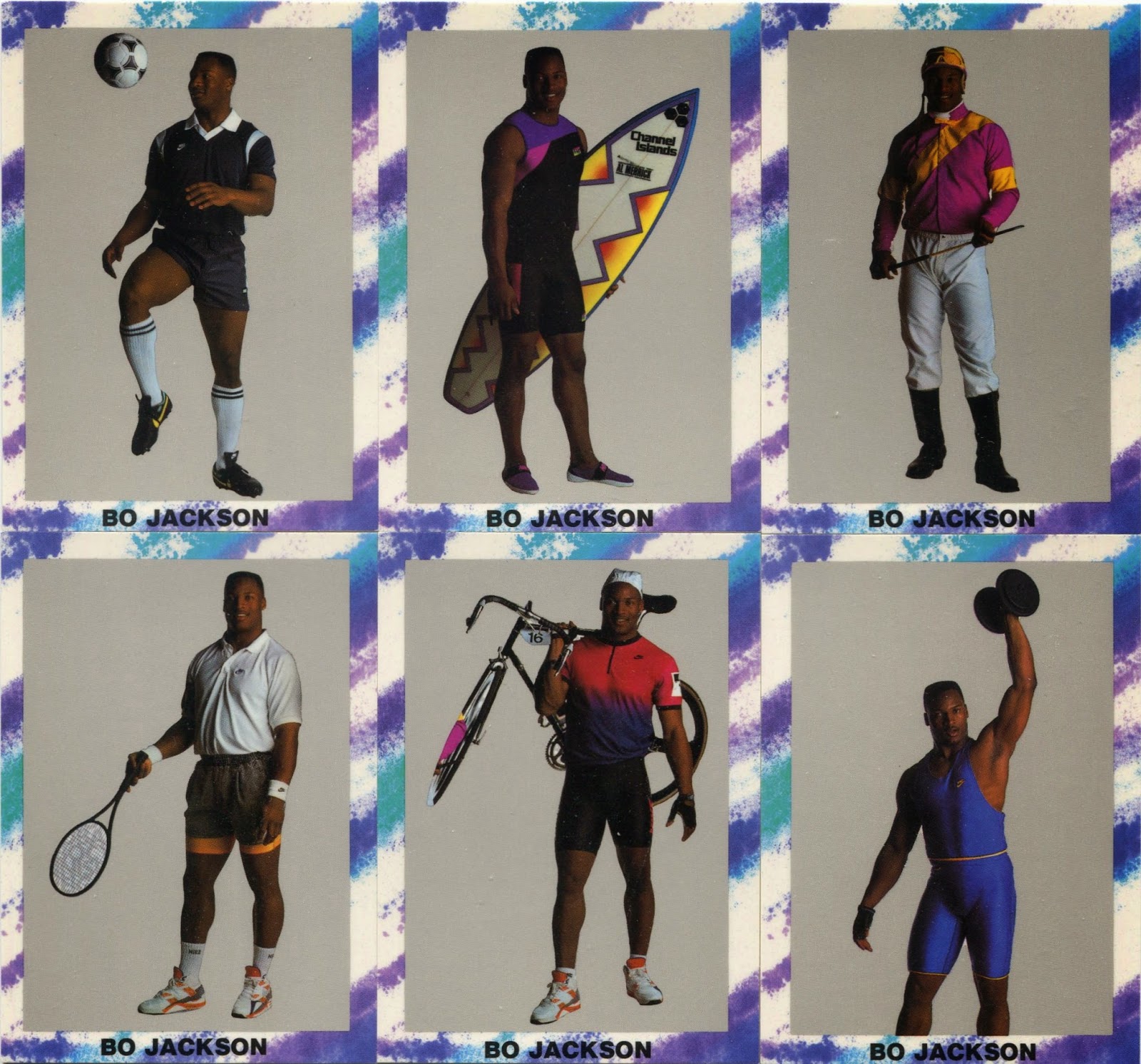 ...because these awkward beauties fell out not too long after.

If it's possible to both love and hate a baseball card, these do exactly that. 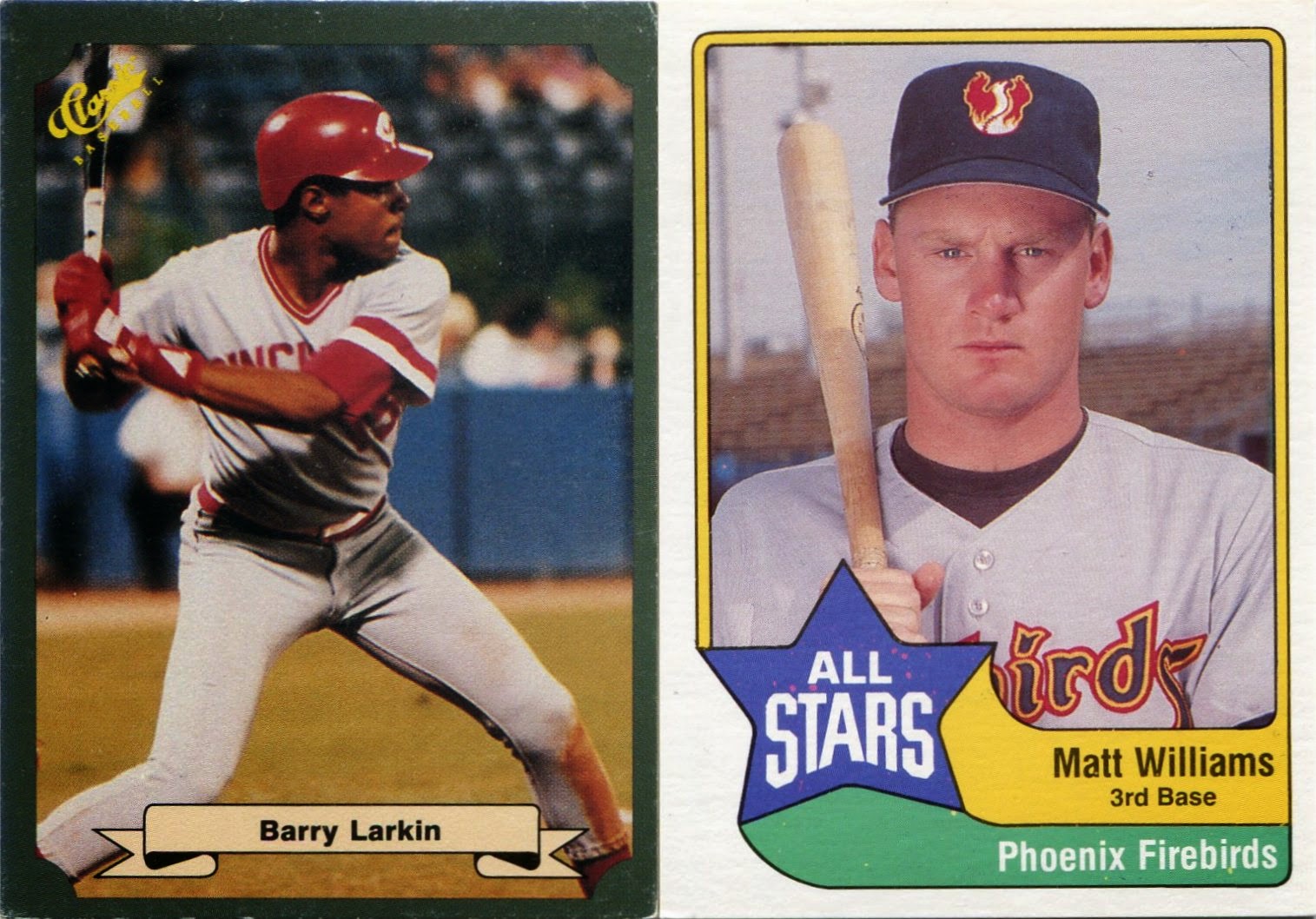 Let's get back to, you know...normal baseball cards.

Kind of. Well, not really. 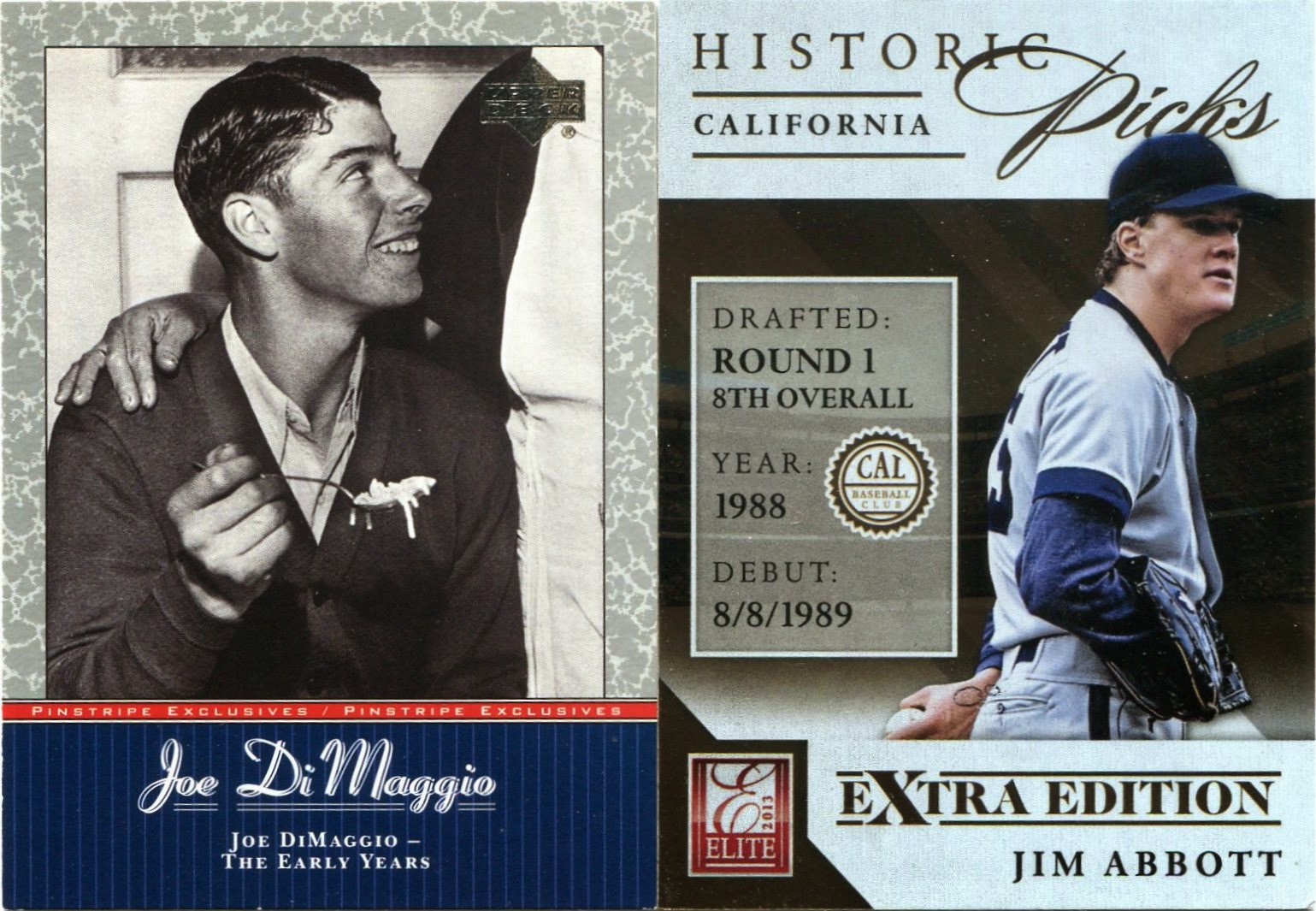 That Abbott sure is ugly, but I'm not passing on anything of him for a nickel.

I didn't get a good look at that "Joltin' Joe" when I first came across it. I just saw the name DiMaggio and threw it onto my pile. Only later did I notice that he appears to be holding a spoonful of spaghetti there. 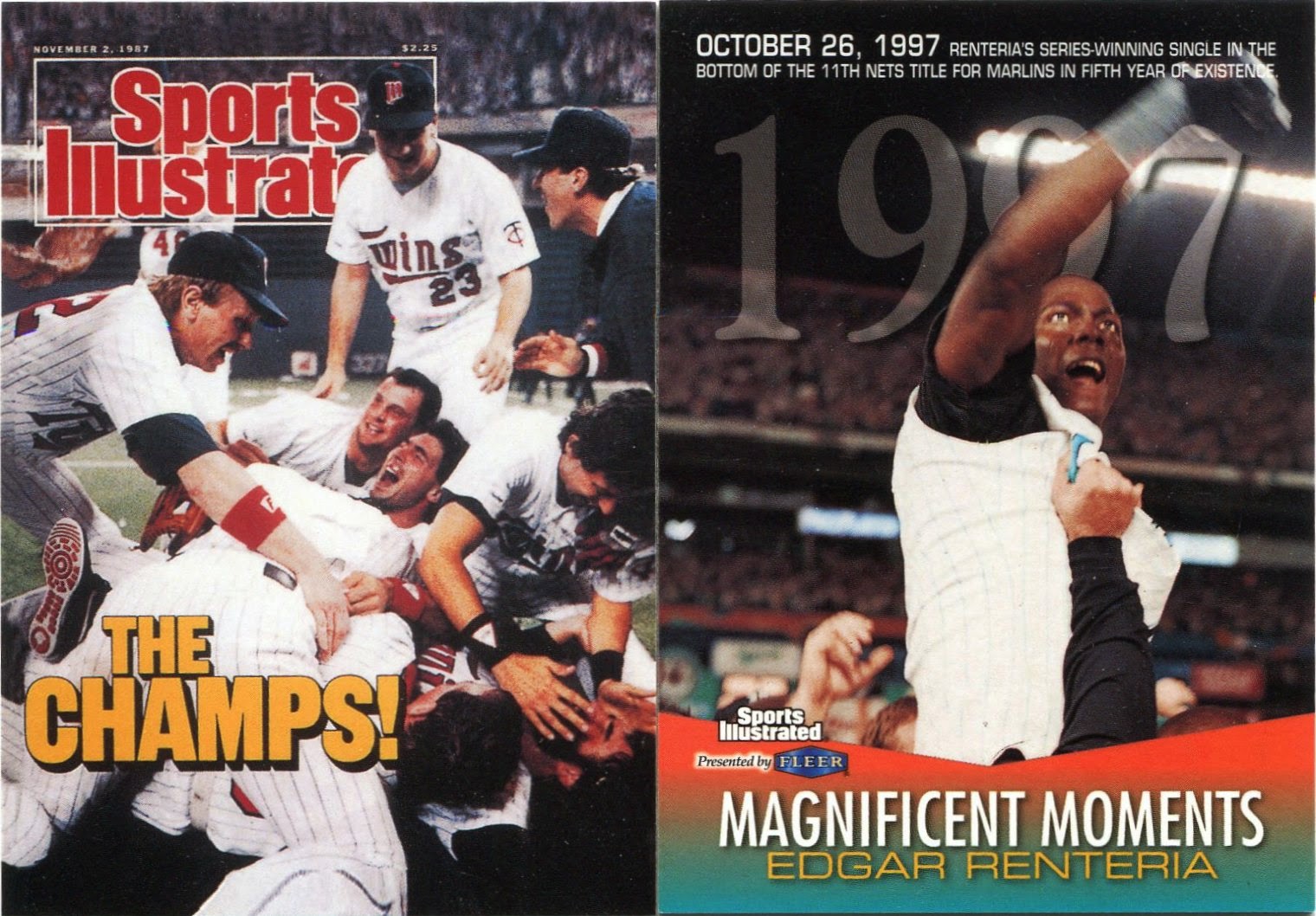 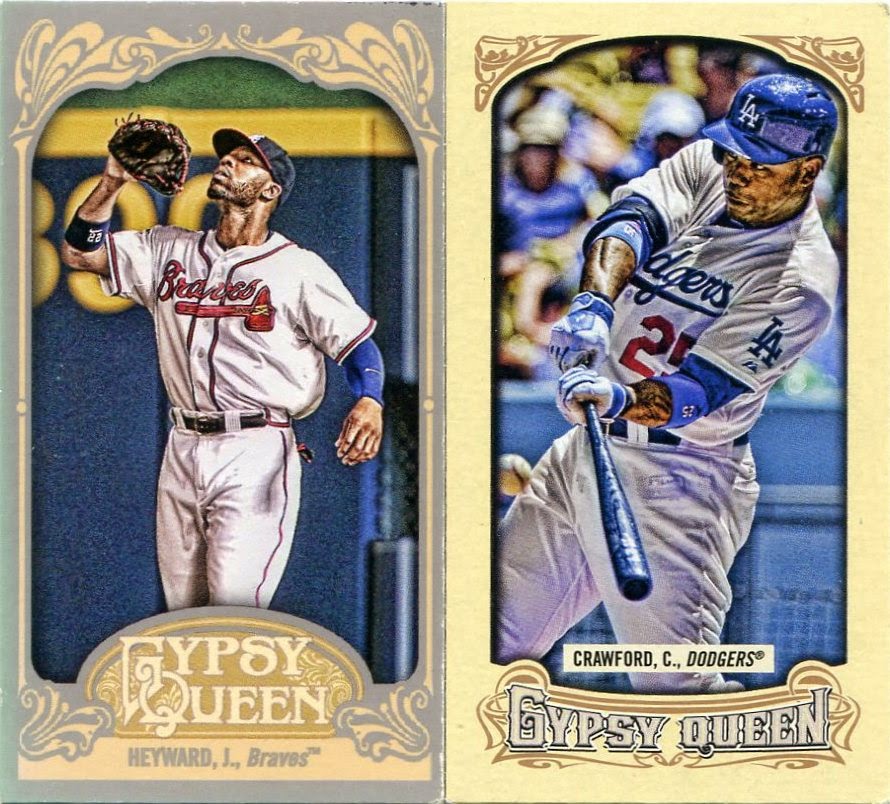 Small in stature, small in price, big in beauty. 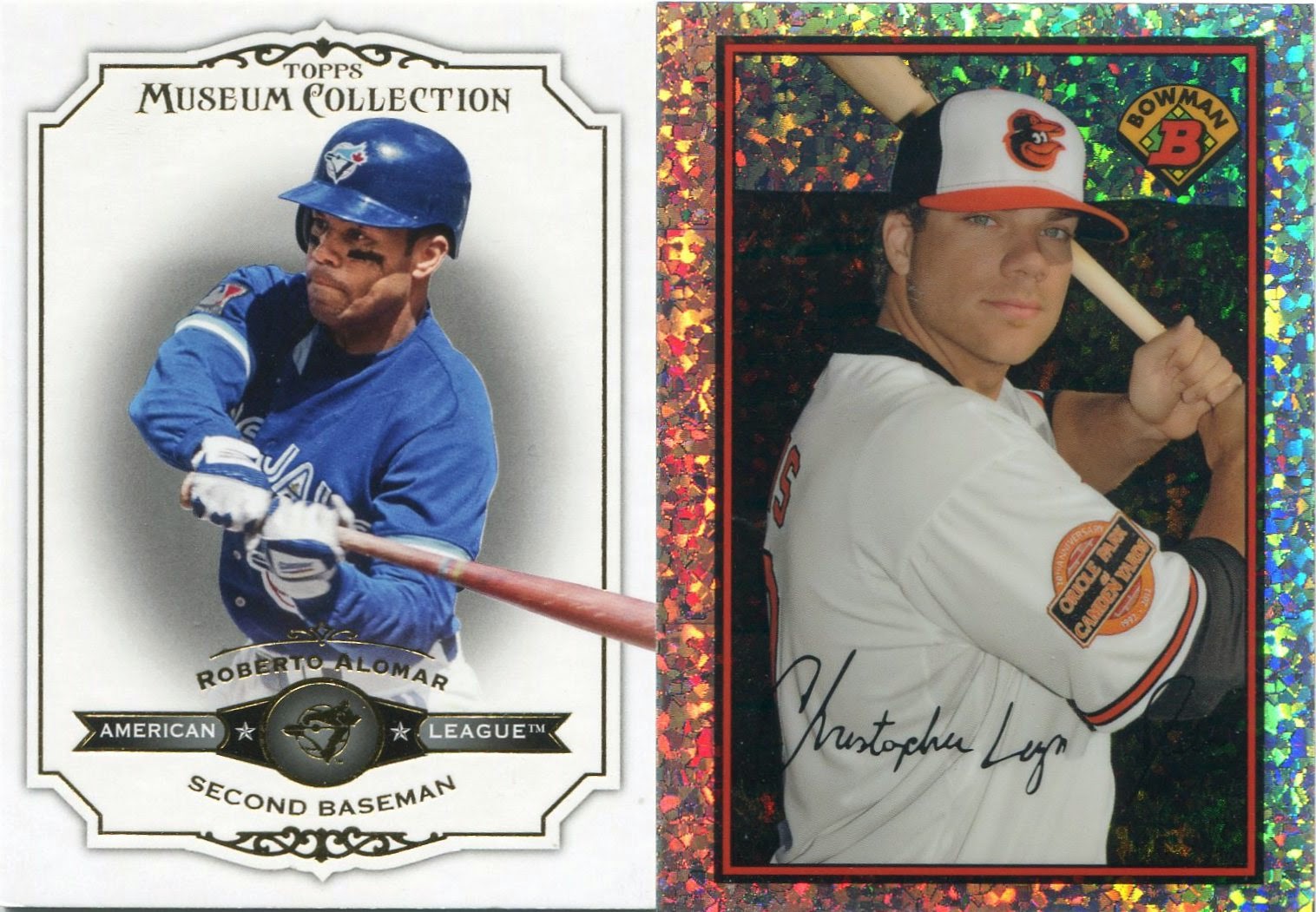 The irony was strong with these nickel boxes.

Mega-shiny cards like that Chris Davis certainly don't strike me as nickel material. I don't think anything in the whole wide world will ever get me to like the '89 Bowman design, but those atomic refractor-like borders sure come close.

People drop hundreds of dollars on single packs of Museum Collection, and yet I found a stack of base cards from the set during my dig for just a nickel a pop. Makes you wonder how something like that could end up in a nickel box in the first place.

If you or a loved one is planning on spending hundreds of dollars on a pack of Museum Collection, stop. Save that money and take a trip out to the Midwest instead.

We've got 'em for nickels here. 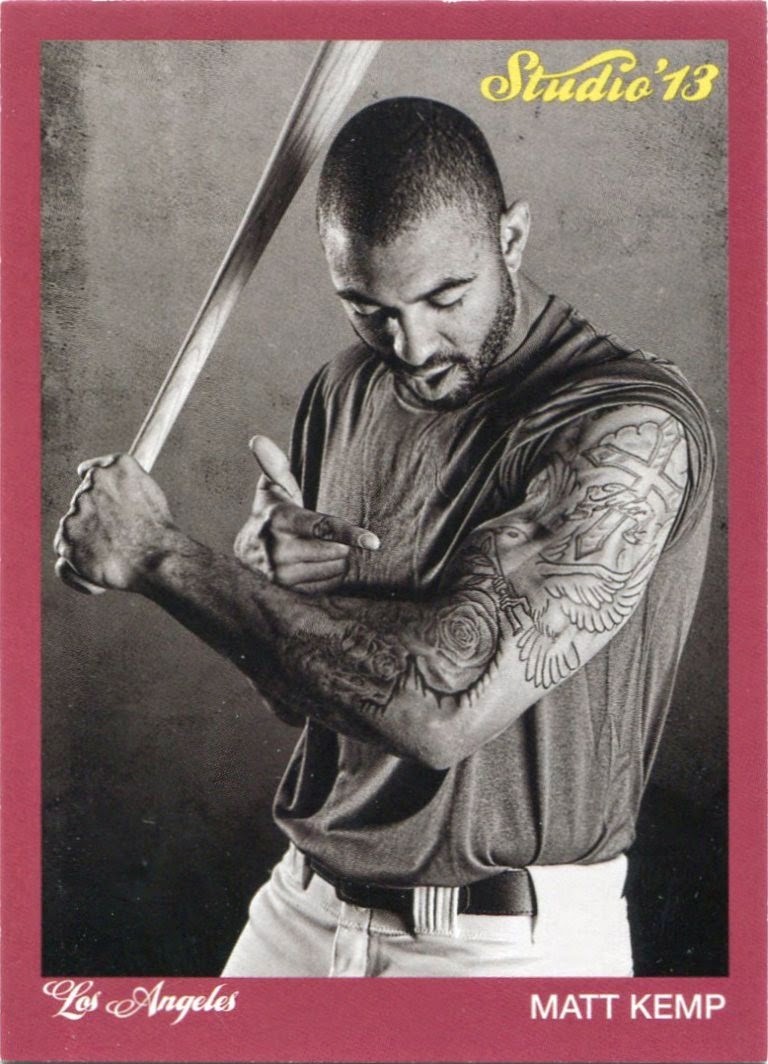 You could've just about knocked me over with a feather when I found this one in the nickel bins.

Coming from Panini's special 2013 Father's Day promotion, this Kemp captures the full spirit of the Studio brand. Perhaps better than the original Studios, if such a thing is possible.

This, along with all the other cards I've featured in this post (and the hundreds of others that I didn't scan), definitely made digging through these nickel boxes a moment to remember. Still, as great as they were, they couldn't hold a candle to the greatest nickel find of them all. But more on that in a later post.

In the meantime, I'm going to lay down and try to convince myself that such awesome nickel boxes weren't just a figment of my imagination. They actually existed.

If you're wondering what you can include in an eventual return envelope, those two gaudy Delgados will make me feel like a happy king.

Killer cards Nick! Looks like you did very well, looking forward to seeing more of your haul...

Man that's such an awesome haul. They used to have nickel boxes at my local card show too but then they decided that New Yorkers are used to paying more and raised it to a dime each (they're lobbying for a quarter each next).

BTW, I've found that Sports Illustrated for Kids still makes cards (every once in a while).

Wow! That is quite the haul! I wish my card shows. I bet I would clean out a few boxes of Yankee cards rather easily.

The sheer amount of Museum in those boxes floored me. And yeah - I think I passed maybe a dozen 90 Donruss in those boxes. Otherwise, all decent cards for a nickel.

what I wouldn't do to be able to comb through everyone of those nickel boxes. awesome haul.

Holy smokes that looks like fun. Glad you found a .05 box. What a birthday surprise!

Would have been a steal of a deal at twice the price!

I totally want all those cards.

Hey nick, thanks for the kind words on Raz' blog! I'd like to send you some of my custom Ginter minis. Email me rcrodd@gmail.com

Btw... I'd love to trade for that 96' topps hobby masters Mo Vaughn card you've got there if it's availible. Lmk okay!

That's all I can muster.

Oh, and that Matt Williams minor league card is outstanding. I'm always on the lookout for cards from that collection on eBay etc.