You had to be there 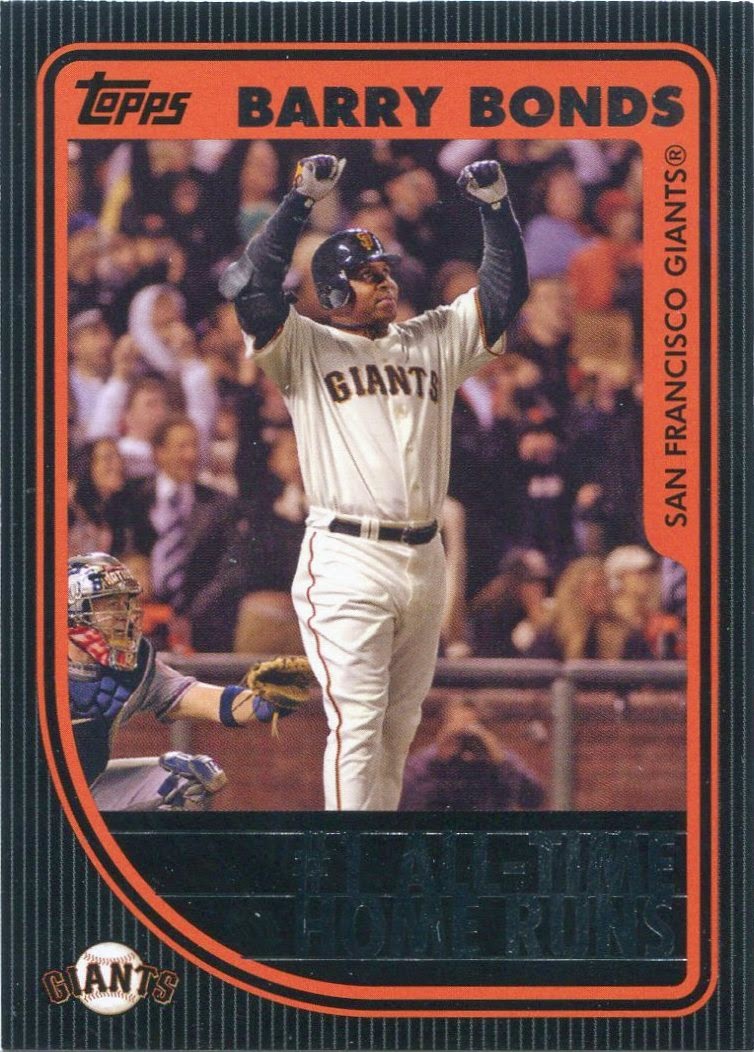 I'd say I probably attend two big league games a year, on average.

I guess I've been kind of lucky, in that I've seen contests that cover just about the entire baseball spectrum. I've seen close games and blowouts. Home runs and sacrifice bunts. I've seen managers get tossed, and very nearly saw a brawl at a White Sox game when I was a kid.

Still, if I could have just one more wish, it would be to see one of the games I've attended immortalized on cardboard. Now, there is a minute possibility that this has already happened, but I don't think there'd be any way of me knowing it. (Although I guess I should be happy that Topps ignored the big "highlight" from my one Cubs game last year.)

In that case, I'll just have to settle for notable events that I witnessed live on TV. Even though I can't say I was there to see any of these happenings in the flesh, it's still neat to say I own cards of moments I saw unfold in front of my very eyes.

Granted, Barry Bonds might be the lone exception there. 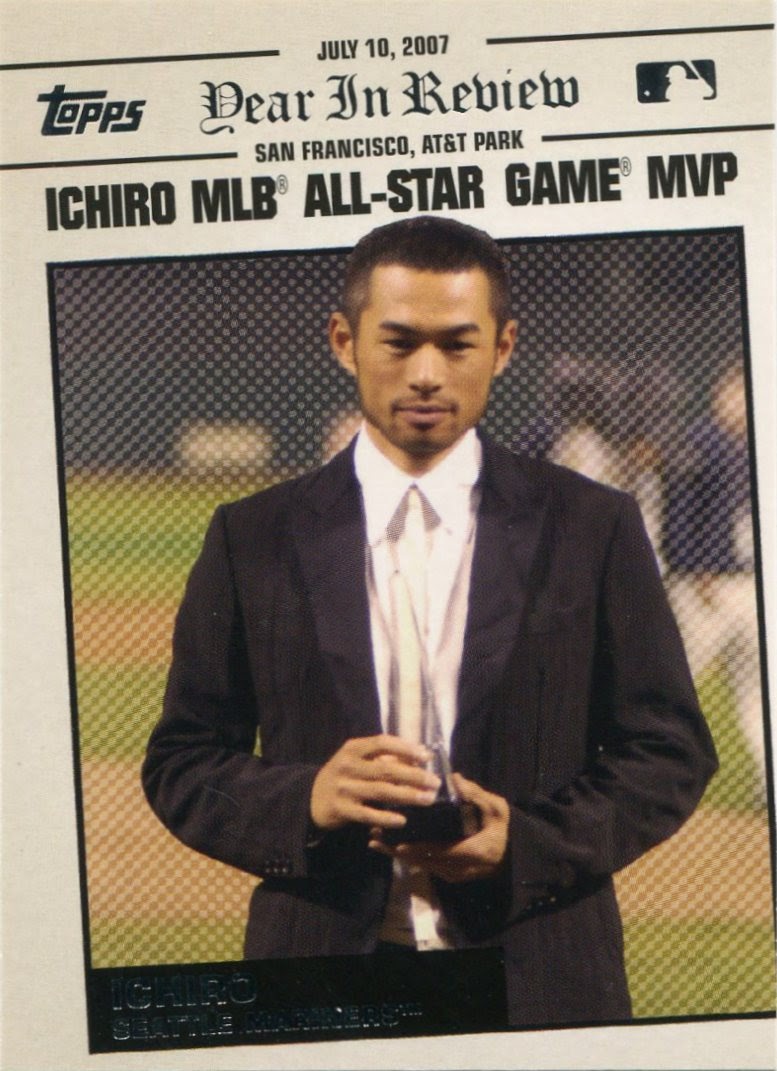 I've watched pretty much every All-Star Game in the last ten years, but the 2007 contest particularly stands out in my memory.

My man Ichiro took home the MVP honors that year, which was fitting since he clubbed what is still the only inside-the-park home run in the history of the Midsummer Classic.

I have a lot of fond All-Star Game memories, but that one stands alone at the top. 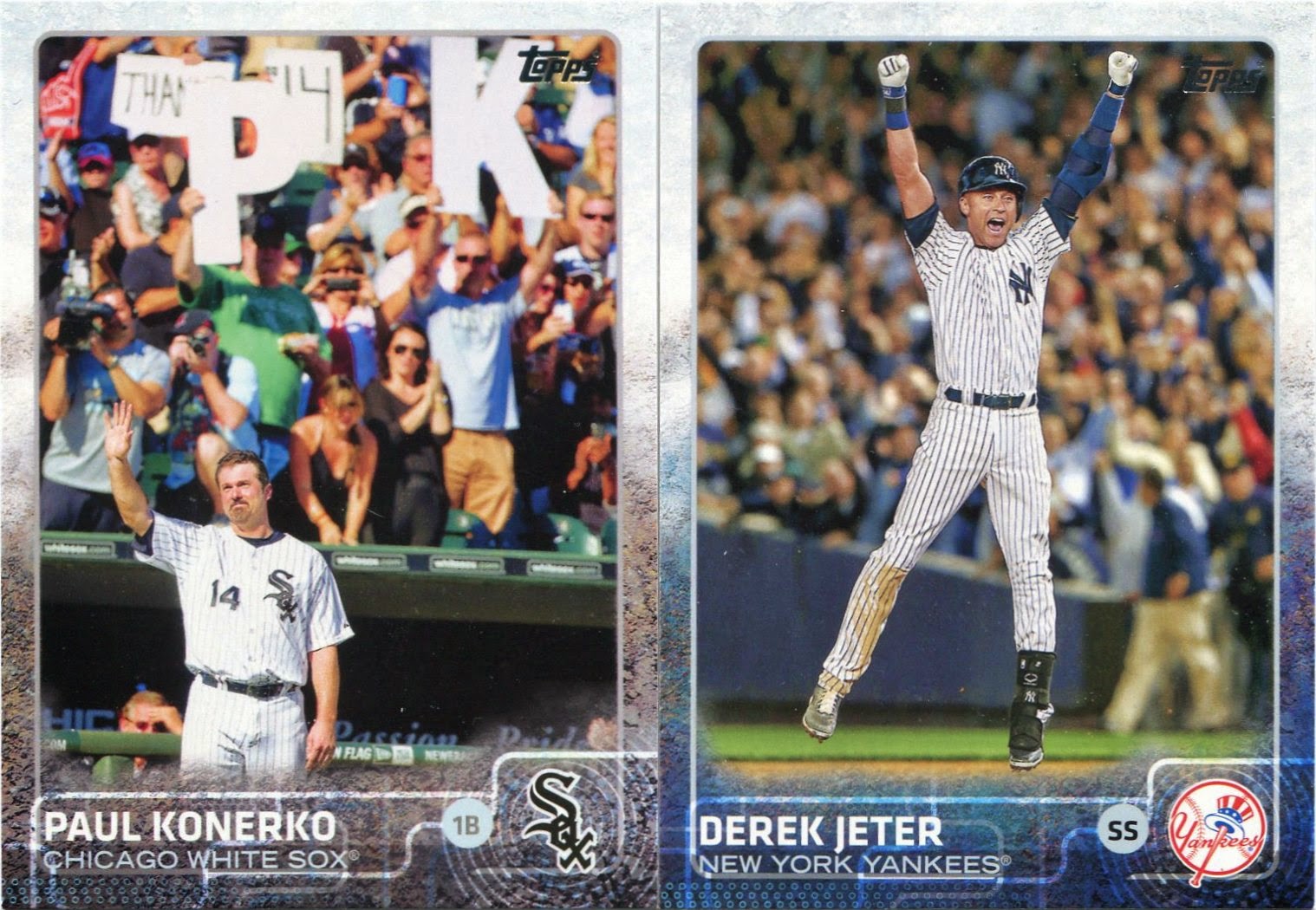 I know I just featured these two 2015 Topps cards the other day, but I can't help showing them again here tonight.

I'm extremely honored to say that I did indeed witness these two moments live last year. Konerko's farewell tugged at thousands of heart strings (mine included), and The Captain managed to sum up his entire career in his final Yankee Stadium at-bat with a game-winning, opposite-field single.

They were, without a doubt, my two fondest memories of the 2014 season. 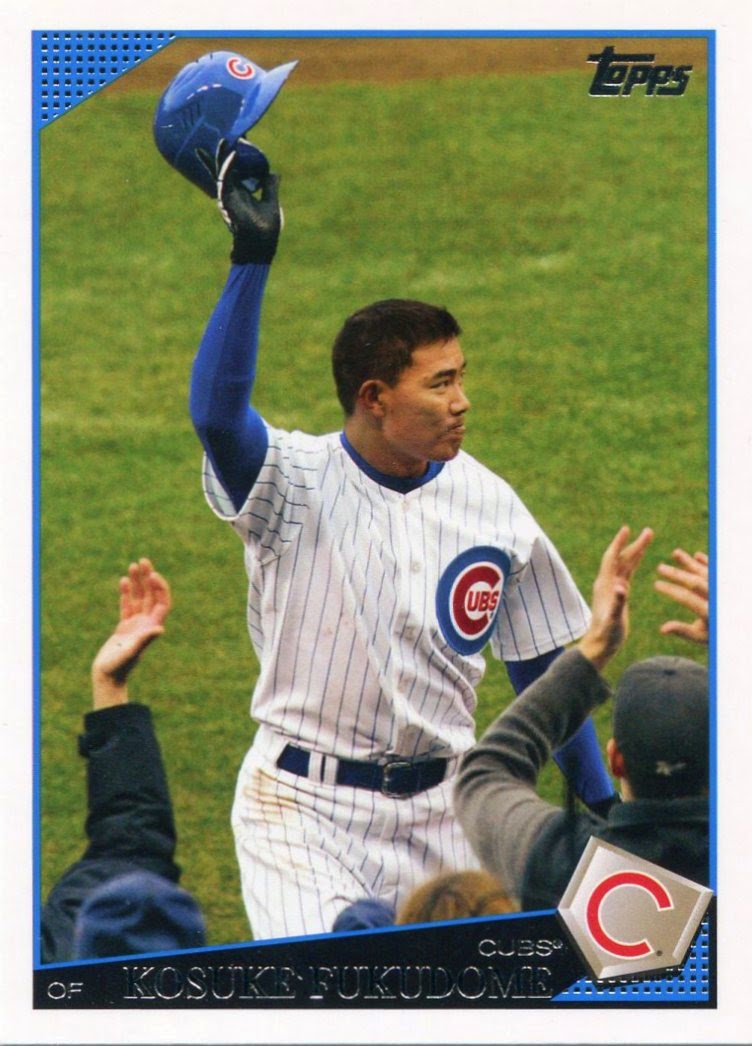 But not every "you had to be there" moment has to necessarily be one for the ages.

For some reason, I have an extremely vivid memory of Kosuke Fukudome's first game as a Cub on March 31st, 2008.

After the Cubbies gave up three runs in the top of the 9th, Fukudome clubbed a game-tying, three-run homer in the bottom of the frame. Topps captured his tip of the cap to the Wrigley faithful after that clutch dinger here. Although the Cubs would eventually lose the game (of course), it's still a fond memory of mine.

The rest of Fukudome's Cubs career, not so much. 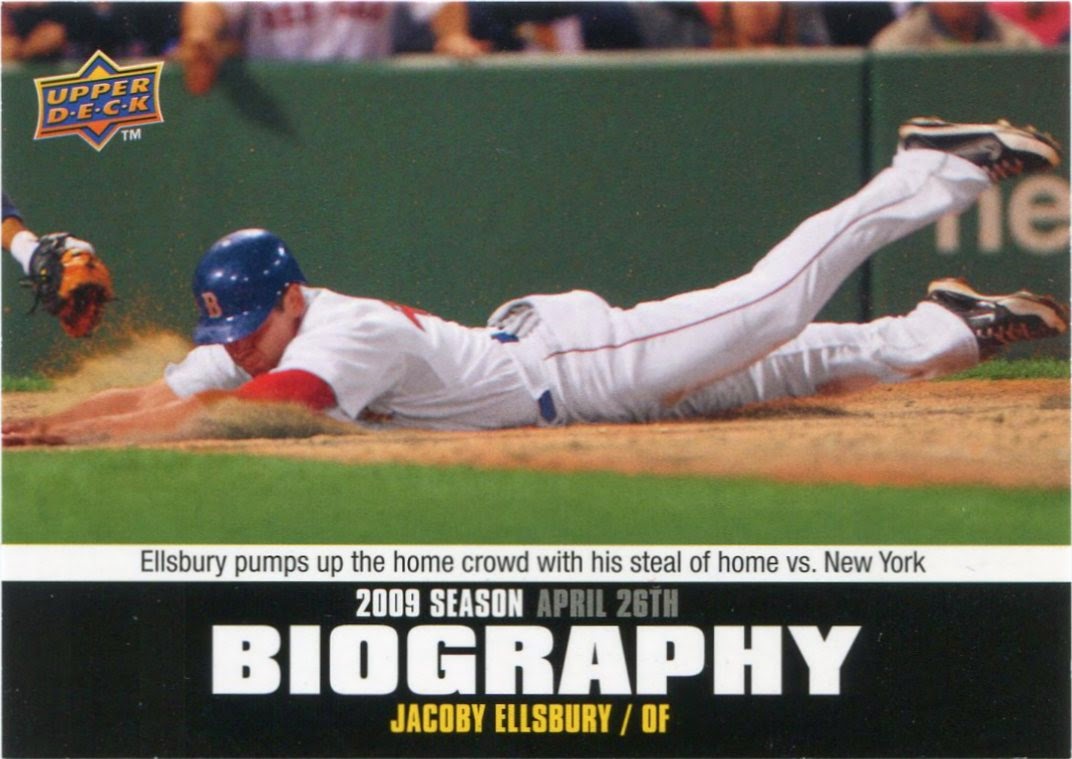 I've witnessed exactly one straight steal of home in all my years of watching baseball.

And, wouldn't you know it, it just so happens to be immortalized on cardboard with this insert from 2010 Upper Deck. Jacoby Ellsbury stole home in the bottom of the fifth in a contest against the Yankees on April 26th, 2009. It was ESPN's Sunday Night game that week, if I'm remembering correctly.

While it only happens once in a blue moon, I still say it's the most exciting play in baseball. 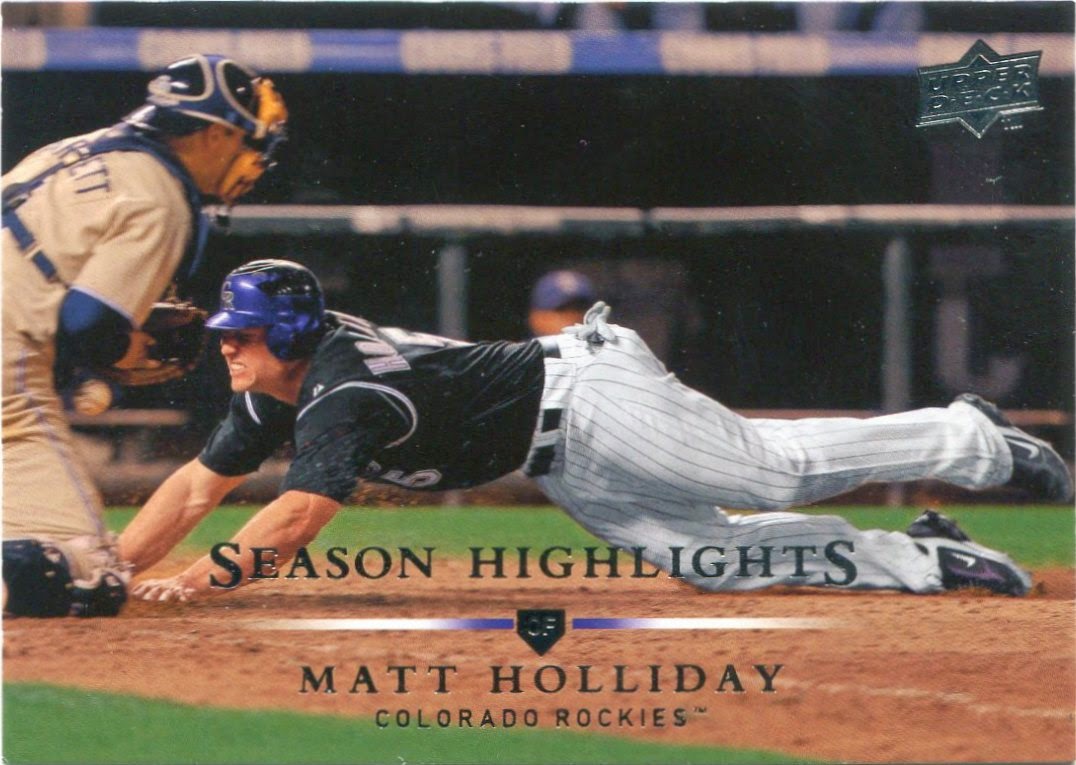 At the time, this was the best ballgame I'd ever seen.

The Rockies and Padres matched up for Game 163 on October 1st, 2007. The contest went back and forth the entire night, and I thought the Padres had the win in hand when they took a two-run lead in the top of the 13th.

However, the Rockies stormed back to tie the game, and eventually won on a Jamey Carroll sacrifice fly in the bottom of the 13th. Matt Holliday may or may not have actually touched home plate on the play, but, given how crazy the game had been up to that point, it seemed fitting for it to end on such a wild note.

I never thought anything could top that memorable contest. 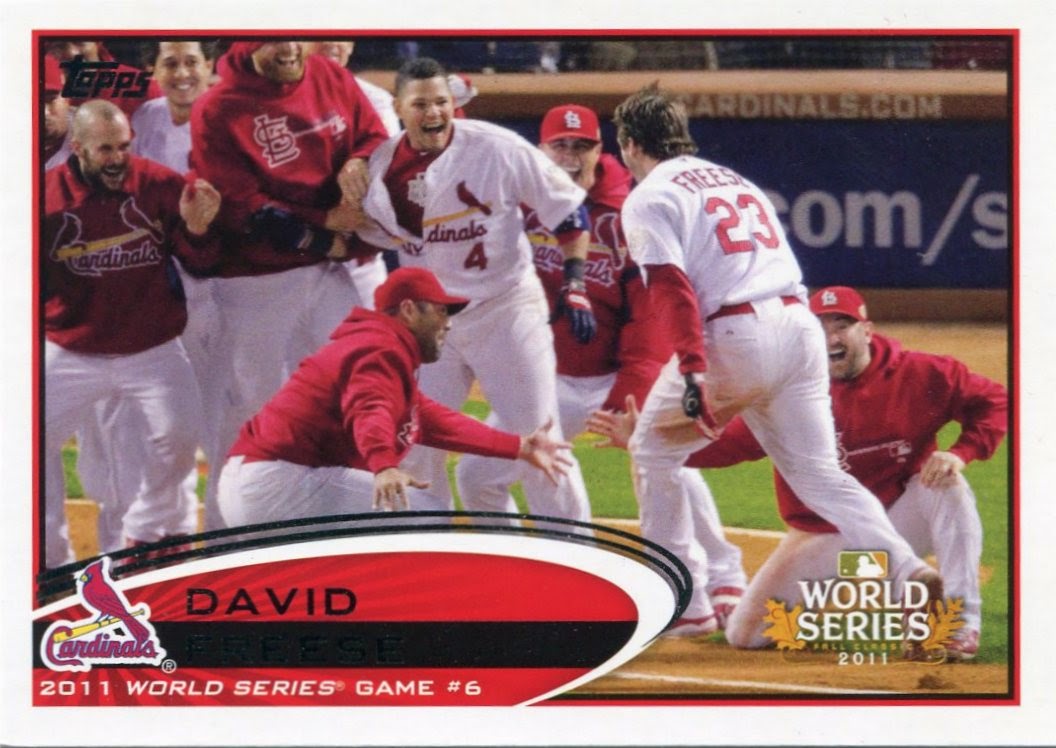 I'm sure I wasn't the only one who watched this gripping contest. I can't say I have any kind of attachment to either the Rangers or Cardinals, but, my goodness, what a game it was.

The Cardinals came within one strike of their season being over on two different occasions, only to roar back and tie it up both times. And, of course, David Freese became a household name after his solo shot in the bottom of the 11th won the game for the Cards, 10-9.

Kudos to Topps on producing such a terrific card to commemorate the contest. You can see the sheer excitement on the faces of all the Cardinals.

It's hard to explain the feeling of owning cards of events that I saw first-hand. There's something innately special about being a witness to memorable moments like these. I can't put it into words.

Tigers/Yankees '76....Fidrych becomes a superstar...my favorite ball game ever!...is that one on a card?...I have the whole game on DVD!

I didn't see game 6 live and had to settle for a pretty bad condensed version (they cut out the 7th and 8th inning) but it was so good that it still managed to give me goosebumps.

The last MLB game I went to was just so I could see Big Hirok pitch. I ended up seeing Big Hirok pitch, A-Rod play, Rivera come out in the 8th inning (and blow the lead) and Ichiro win the game with a walk-off steal that was also a error on the other team's part. Oh and that other team was the Red Sox ;).

I loved that Ellsbury steal. That was a great game. I also watched the back-to-back-to-back-to-back home run game between the Red Sox and Yankees. Manny Ramirez, J.D. Drew, Mike Lowell, and Jason Varitek were the perpetrators.

As for games I attended, I saw Varitek hit three home runs in one game at Kansas City. That was probably the biggest highlight.

Has there ever been a boring game 163?

I remember the Rockies game, and so I was doubly excited two years later to see the Twins in a game 163. It was the second last game ever at the Dome, and man did they pull out all the stops for it. The momentum didn't really carry over against the Yankees, but when does it ever for the Twins?

…still waiting for Holliday to touch the plate

Having been to exactly 2 1/2 MLB games in my life, it's more than likely zero live moments I've gotten to see have been comitted to cardboard. I did watch Ripken's 2,131st, and those cards bring back great memories of watching the game w/ my Dad. Other than that I'm a real live baseball rookie.

There have been some pretty memorable playoff games in recent years, eh?