The return of Nomo 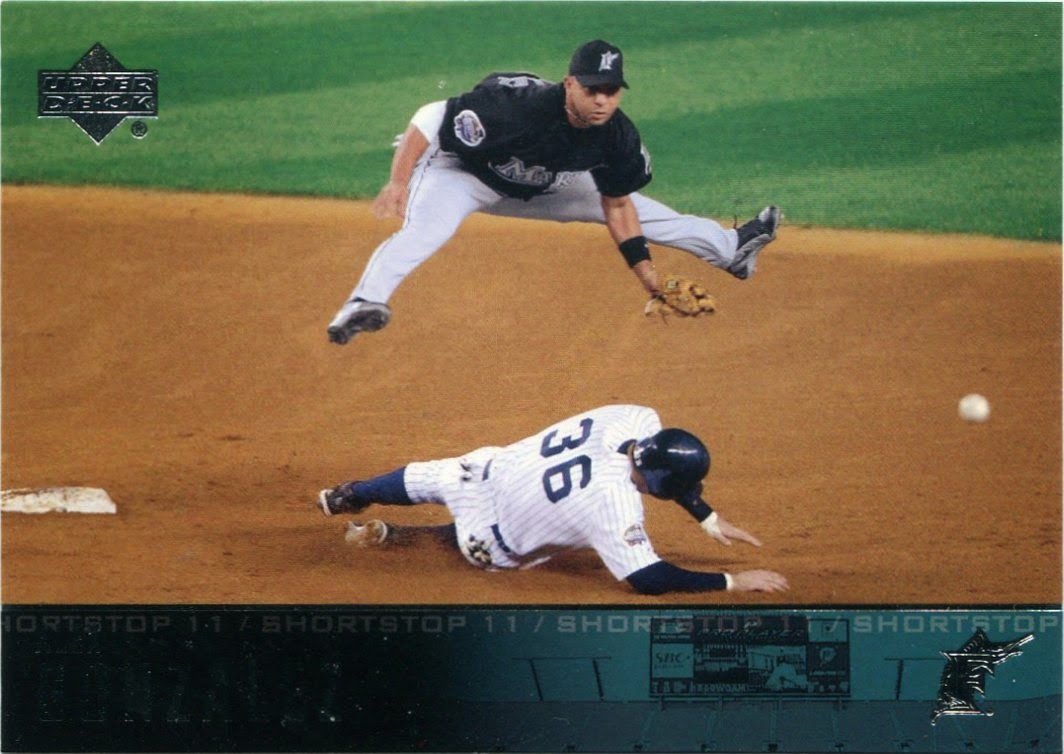 It sounds strange, but Hideo Nomo was one of the first things that drew me into the blogosphere.

I said as much in one of my first retrospective posts. I noted that one of my best blogging buddies, Michael Spiegel of the prolific "Nomo's Sushi Platter," had an entire blog named after the guy.

Sadly, Nomo talk kind of faded away with the hiatus of Michael's blog. But, wouldn't you know it, I received an email from Mr. Spiegel himself asking if he'd like to set up another trade. He and I used to swap cardboard all the time, so I was ecstatic to hear from him again.

Not long after, one of Mr. Spiegel's famous batches of baseball cards arrived on my doorstep. He hasn't blogged in a while, but I'm happy to say that he hasn't lost his touch for finding fabulous cardboard.

Take this Alex Gonzalez, for instance. It's a double dip, it's horizontal, it's from the World Series.

It's everything a collector like me could ever want. 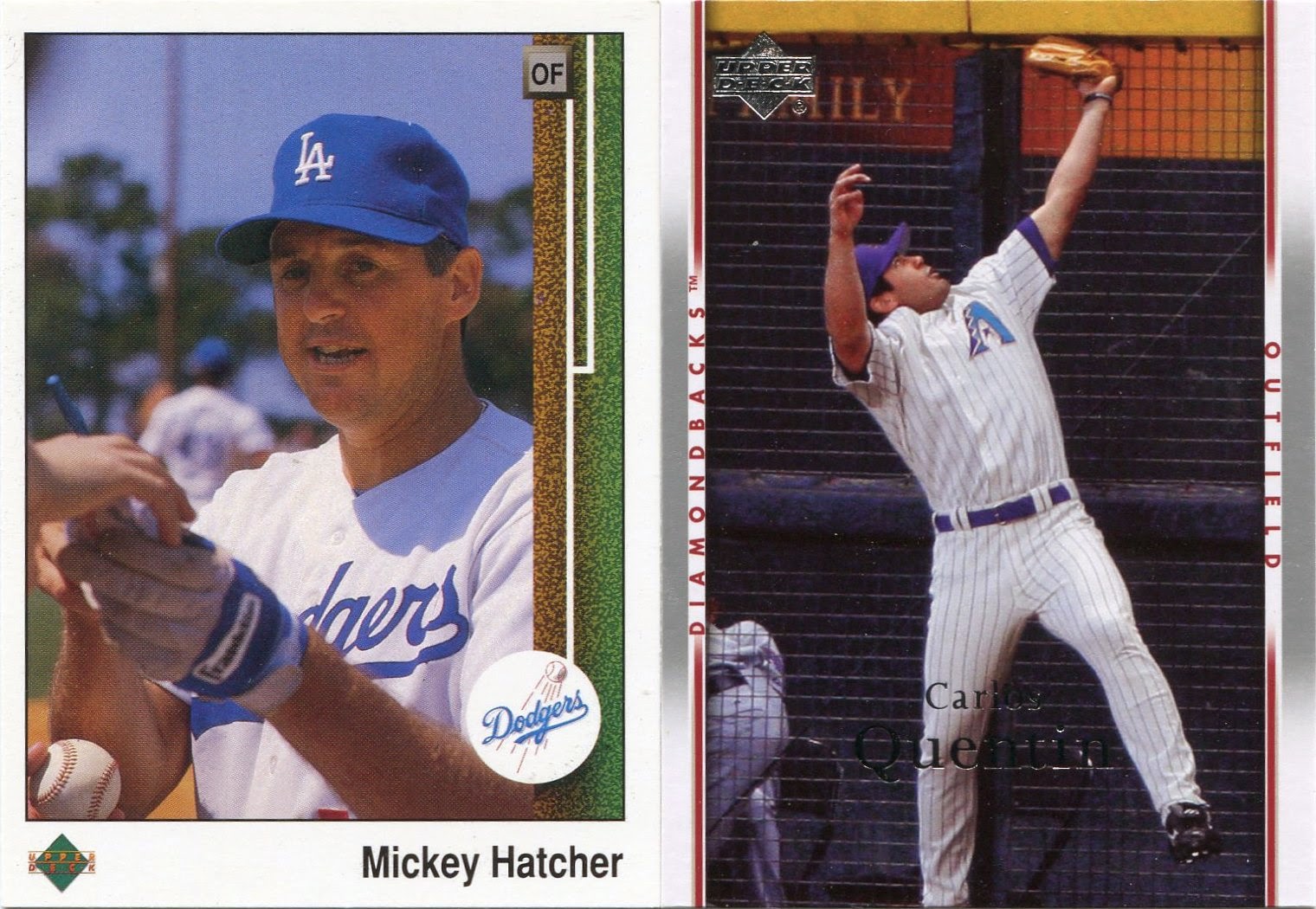 Because Mr. Spiegel is a Dodger fan, I'm sure the Hatcher "autograph" shot was a dupe.

I'm happy to have the Quentin for the great wall shot, but I'm sure Michael was more than eager to unload it. He's probably more grateful to be rid of it than I am to have it.

I don't think Carlos Quentin cards are allowed within 100 miles of Dodger collectors. 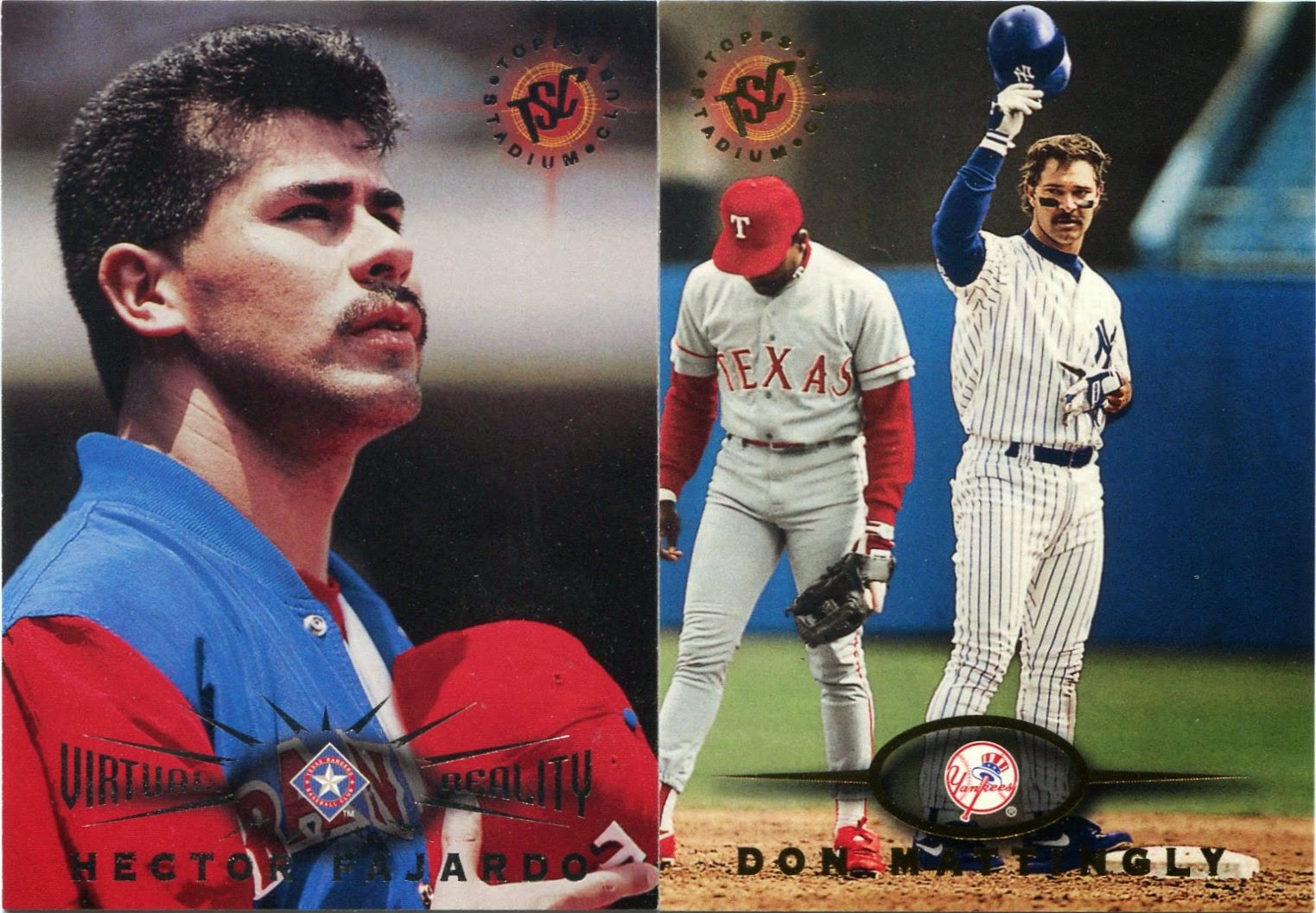 Stadium Club comes through with hits to both my "anthemic" and "tip of the cap" mini-collections.

Take a good look, because I doubt you'll ever see Hector Fajardo and Don Mattingly in the same scan again. 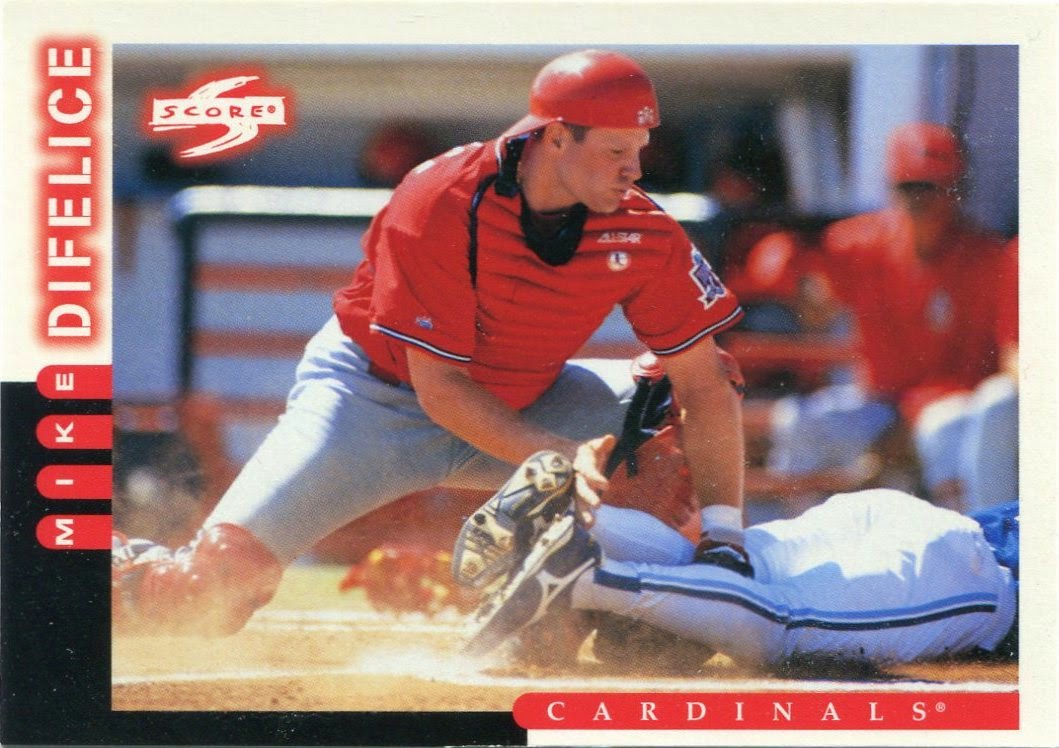 The mini-collection portion of this post closes out with a "play at the plate" from Score's swan song.

The placement of that tag looks a little too close for comfort to me. 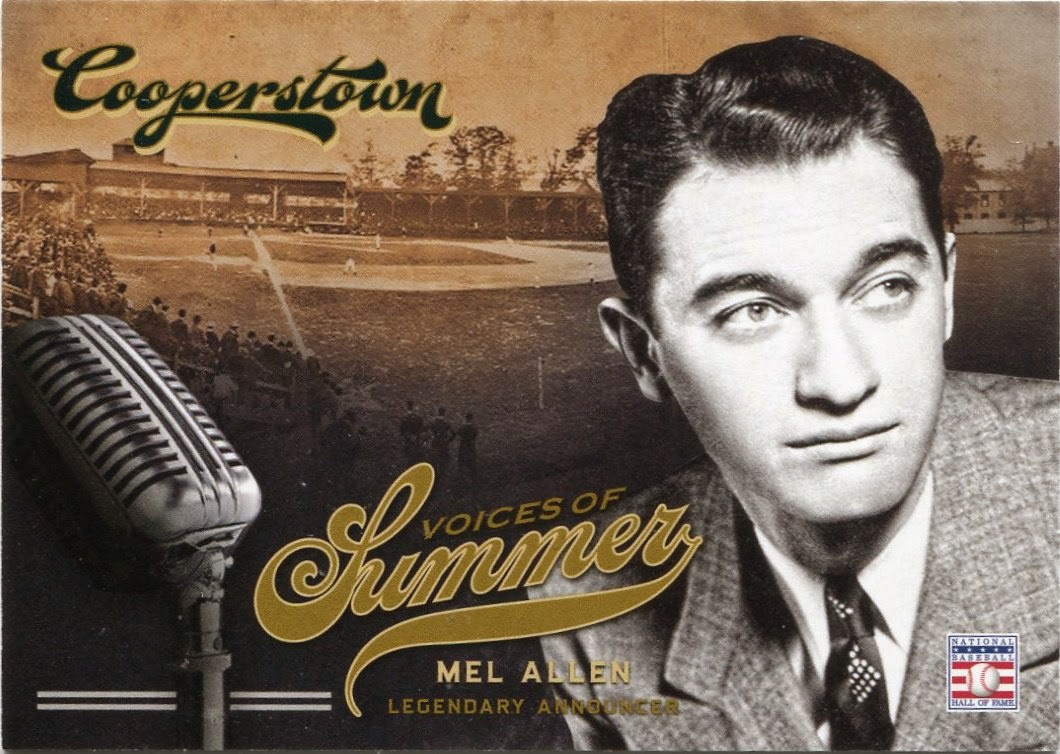 Like all the packages I've received from Mr. Spiegel, the fun went way beyond mini-collections.

Panini Cooperstown earned a ton of bonus points for this awesome "Voices of Summer" series. There aren't nearly enough cards of announcers out there, if you ask me. (Might not be a bad idea for your own insert set one day, Topps.)

The one Michael sent me features the legendary Mel Allen. He's perhaps best recognized as being the longtime voice for the Yankees, although I know him more for his stint on "This Week in Baseball." 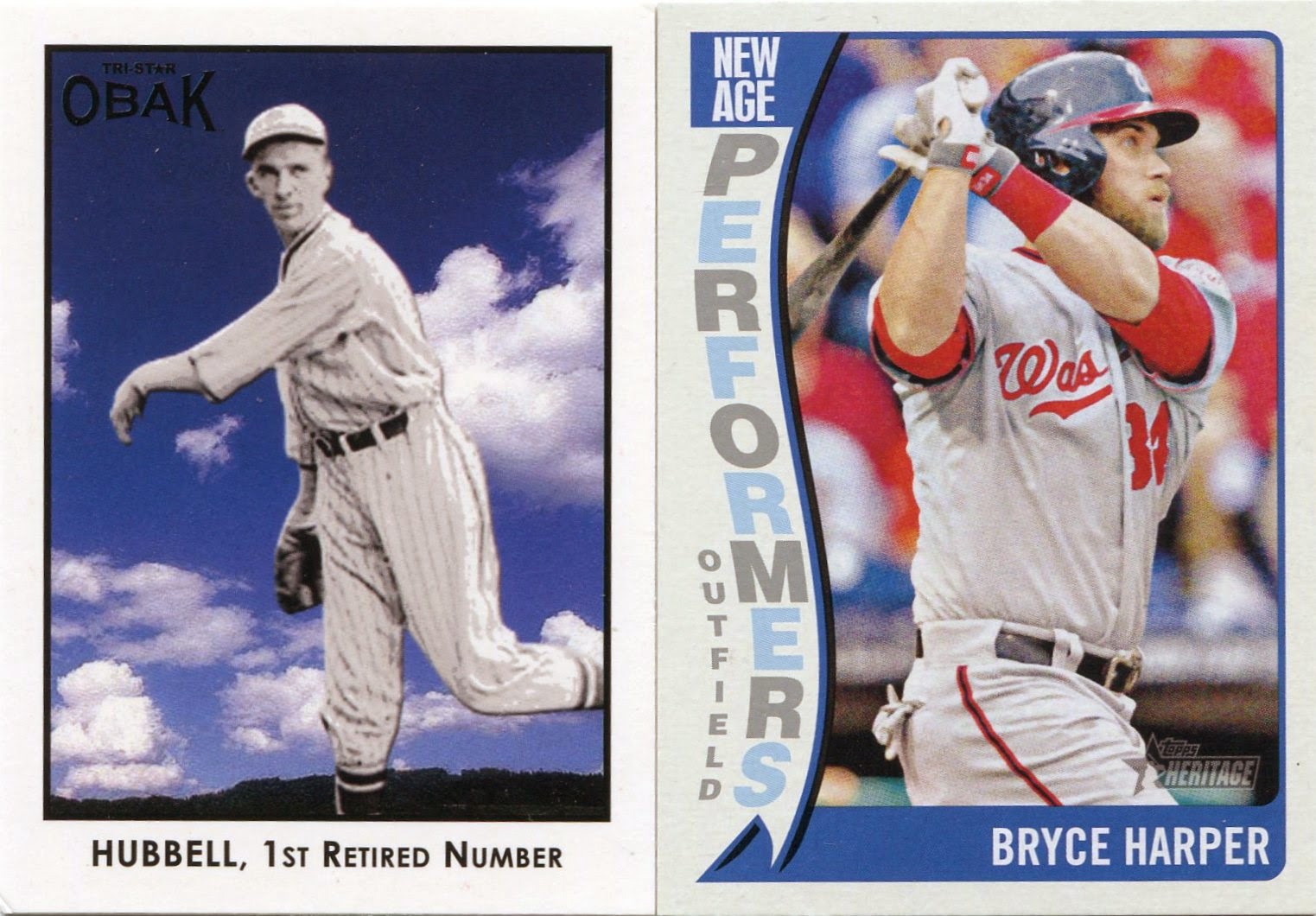 If you ever find yourself crafting a trade package for me, Obak is always a good idea. The fact that it covers so many little tidbits about the National Pastime makes it perfect for me.

I sure didn't know Carl Hubbell was the first National Leaguer to have his number retired until I got my hands on that card. 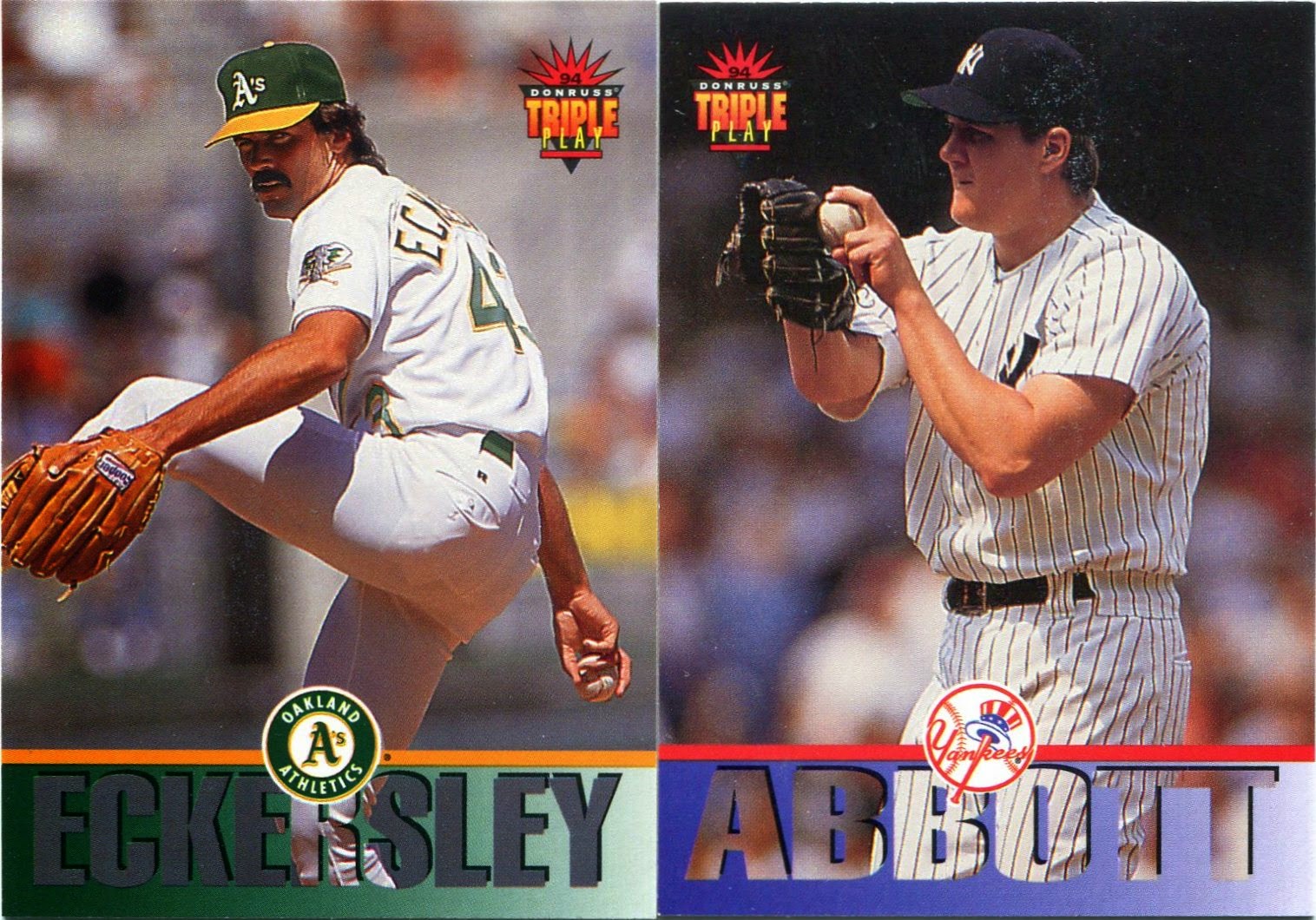 I still can't decide whether I like this set or not.

But I can tell you that anything of Dennis Eckersley or Jim Abbott is a surefire winner in my book. 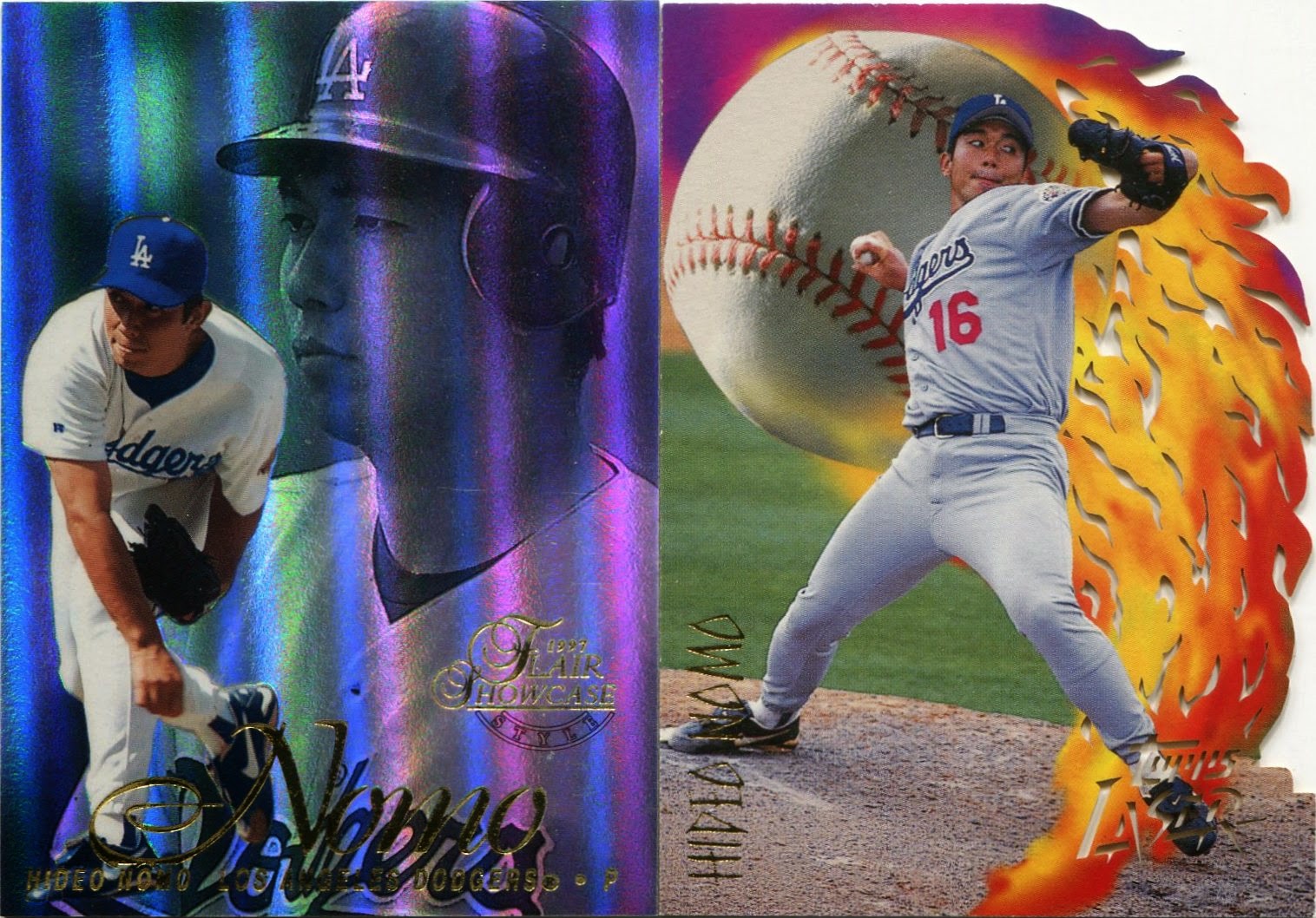 You had to know this was coming.

I mean, how could a guy with a blog by the name of "Nomo's Sushi Platter" not include a couple Nomos in a trade?

It's even sweeter now that I've come around and have actually started collecting Hideo Nomo. I probably quadrupled my collection of his through my local flea market's dime boxes last year. Even so, though, I needed both of these beauties.

Those Topps Laser cards pretty much sum up the '90s on their own. 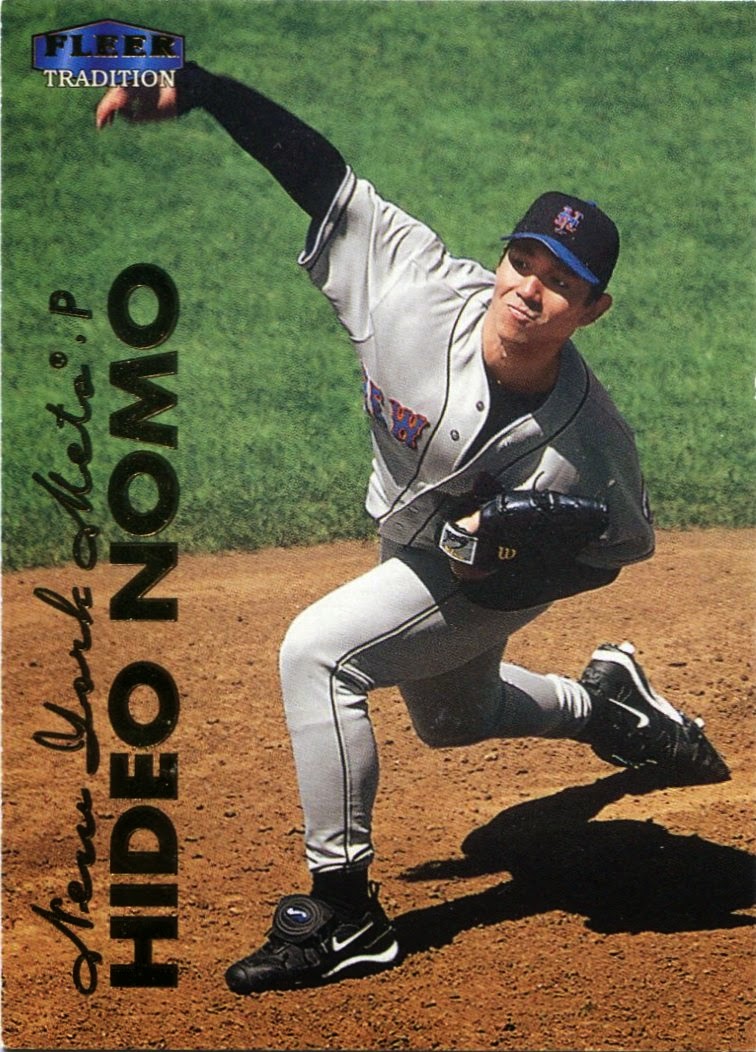 I know it's tough, Dodger fans, but you have to accept it.

Hideo Nomo did play for other teams during his career. Did he look awkward in a Mets uniform? You better believe it. But it still happened, and there's no changing that.

Either way, it's good to see Mr. Spiegel making the blogosphere rounds again. This place is definitely better when he's around.

And, no matter what, Hideo Nomo will always be the man.
Posted by Nick at 6:31 PM

GREAT CARDS, I DON'T MIND THOSE TRIPLE PLAY CARDS, THEY ARE SO MUCH BETTER THAN THE INITIAL ISSUE.

I was just looking at my empty box of 2010 Obak and thinking how great the set was.