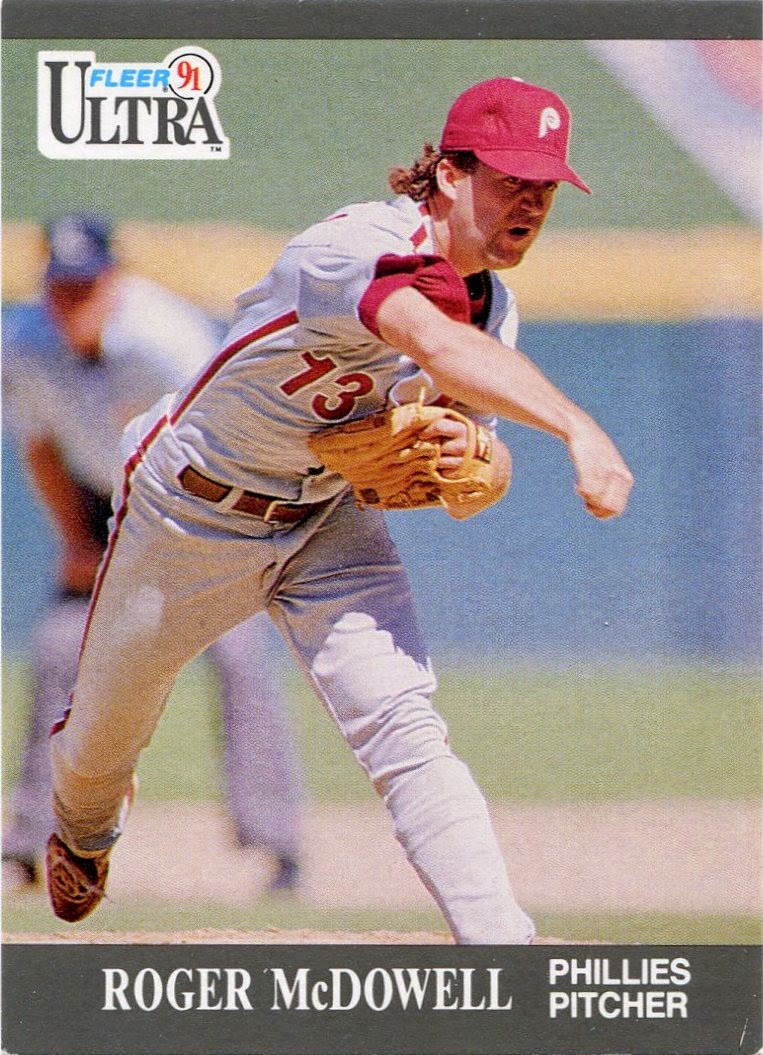 Fleer Ultra was one of those brands that always kind of bubbled under the surface.

It made the rounds in the hobby for a full seventeen years, although I'd bet a lot of collectors don't even know it lasted half that long. Ultra was never the flashiest or most storied brand out there, but I've always felt that it deserved much more recognition than it got over its long career.

It all started back in 1991. Trying to capitalize on the UD-driven "high-quality" card craze, Fleer birthed an entirely new brand called Ultra. With a name like that, the expectations were clear. This was supposed to be a game-changing set.

I've always thought of Ultra as Fleer's response to Topps Stadium Club, but the two were actually first created in the same year. I guess it was just a coincidence that both of the "high-quality" sets took off in 1991. Unlike Stadium Club, however, it took a while for Ultra to get on its feet.

Between the gray borders, strange Ultra logo, and plain white text, the brand's first release in 1991 was a far cry from what we'd see in later years. 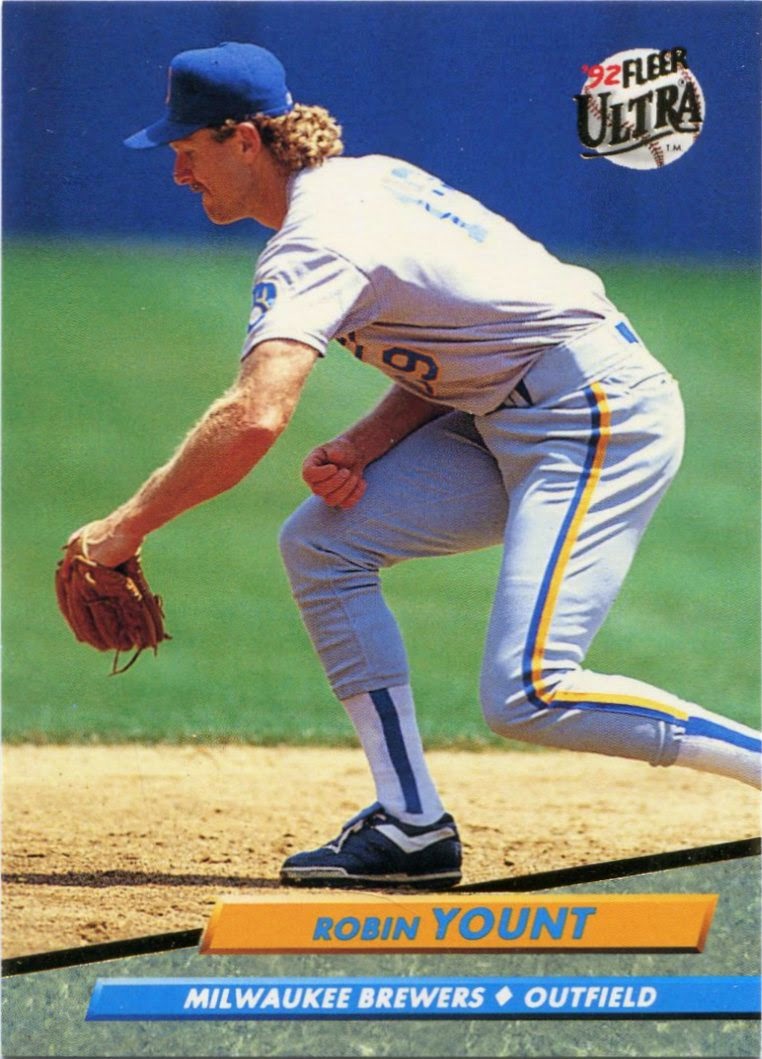 Ultra came out swinging the next year.

To me, 1991 was kind of like a test run. This is probably the first set I think of as purely Ultra-esque. The "swoosh" Ultra logo that was introduced in '92 would be used until the brand's dying days in the late 2000s.

These aren't quite full bleed, but they're closer to what Ultra would produce down the line. The photography is solid (again, a sign of things to come), and the design is very economical.

It seemed like the sky was the limit for Ultra. 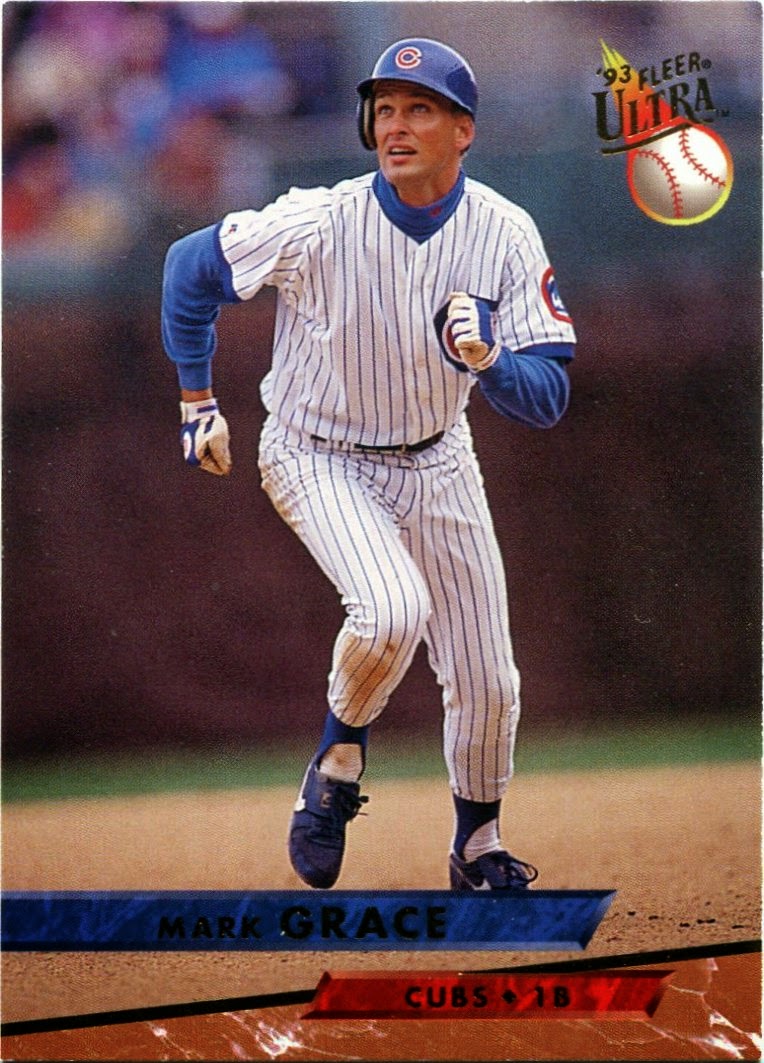 If 1992 and 1993 Ultra seem like one in the same to you, you're not alone. I get these two mixed up all the time. Even after a number of years in the hobby, I still can't tell the difference off the top of my head. It may be the most obvious example of a company plagiarizing itself.

Other than a little more liberal use of foil and the fireball in the 1993 Ultra logo, these two designs are pretty much exactly the same.

Even though I wasn't there to see it first hand, I'll bet a lot of collectors at the time soured on the Ultra brand after such blatant laziness and ineptitude. 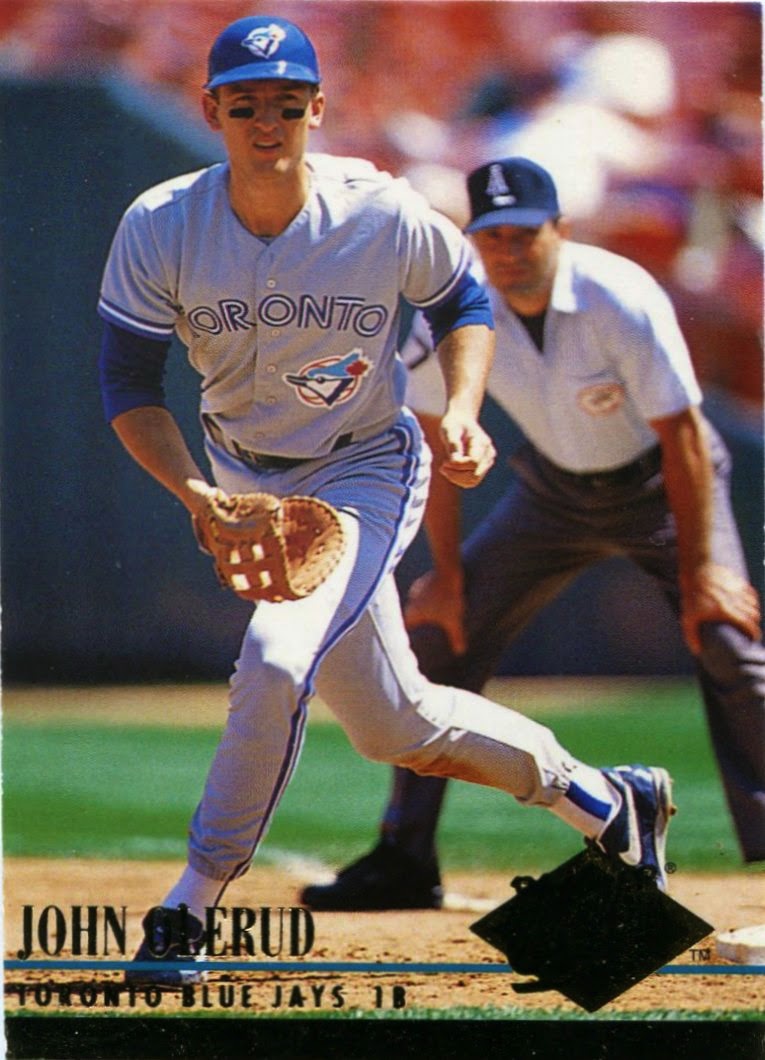 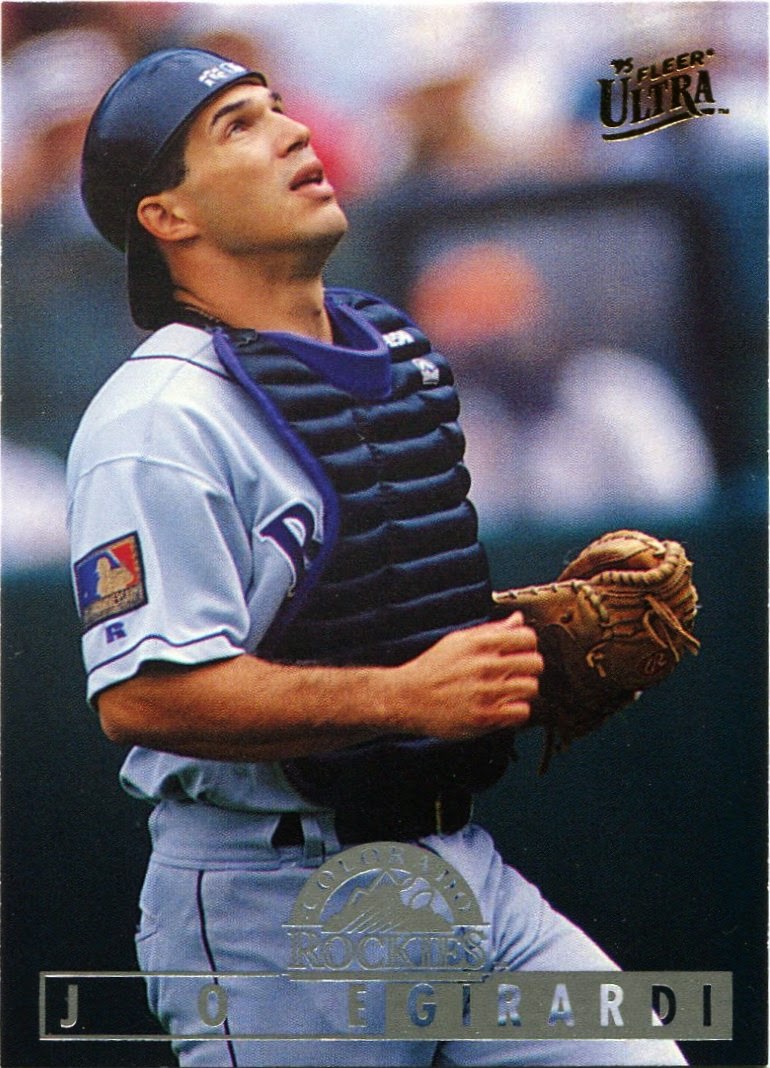 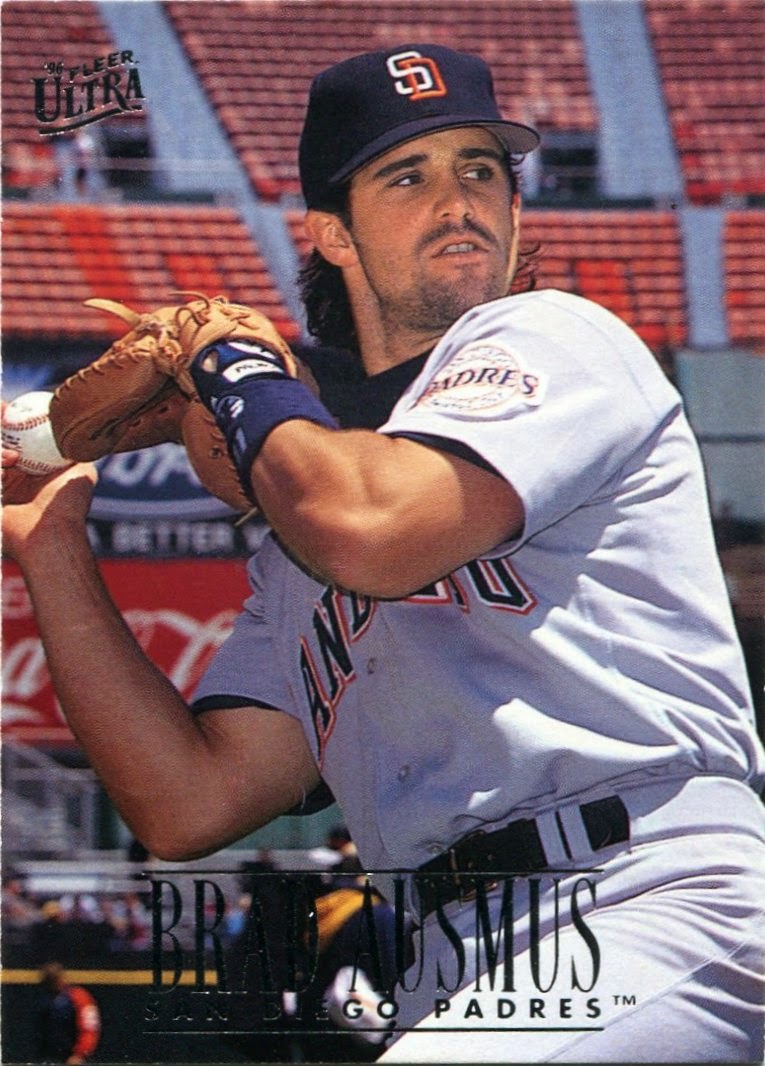 The next three years of Ultra didn't help matters much.

Sure, these are all original designs, but they sure are boring. And, while I don't think the people at Ultra ever put a lot of effort into layouts and such, the photography in Ultra's early years wasn't good enough to make us ignore the blandness.

If I try to think of 1994, '95, or '96 Ultra, I come up blank. I had to head to the Internet to remember what each of these looked like because they're simply not memory-burning sets. You don't see much of mid '90s Ultra anywhere these days, either. I only have a handful of each.

The one thing that Ultra's "Dark Ages" did have going for it was the fact that it began the transition into vivid, full-bleed designs. That said, there were still some kinks to work out. A lot of kinks.

By 1996, it was obvious that Ultra needed a big shot in the arm. 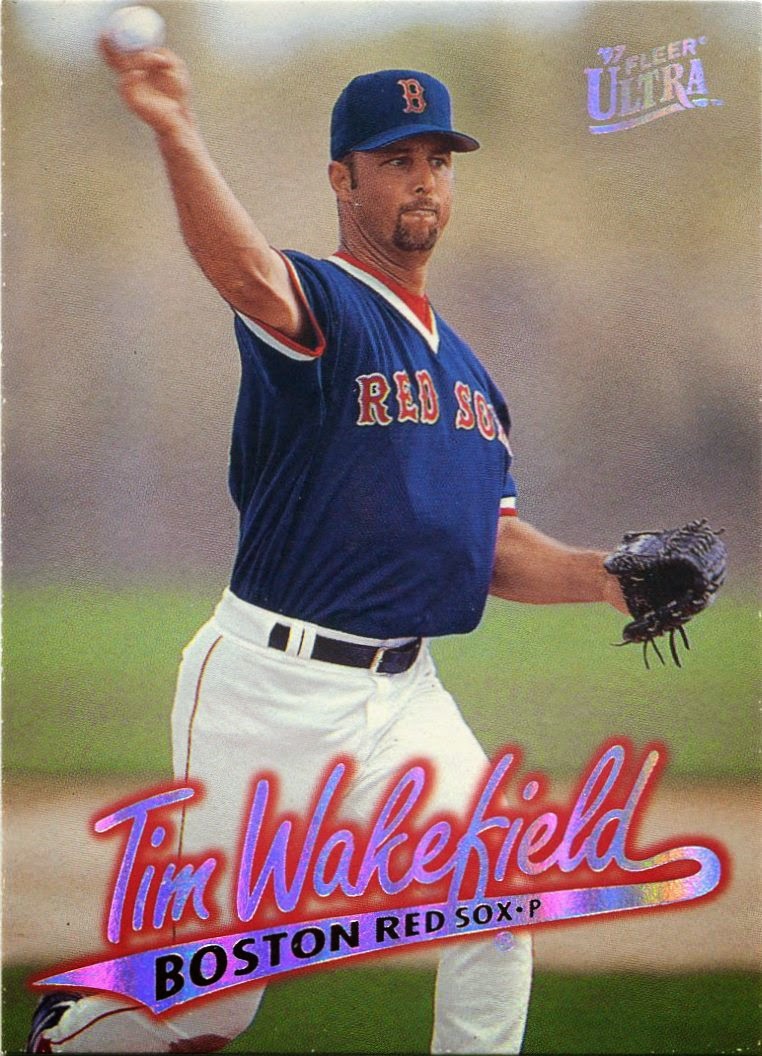 That's exactly what collectors got the very next year.

The bland, archaic block text of 1996 Ultra was replaced by shiny, cursive font in '97. I don't know if the photography changed that much between 1996 and '97, but the rainbow ribbons of the latter sure make the images pop a lot more.

I'm vehemently opposed to cursive on cardboard about 95 percent of the time, but 1997 Ultra is one of the extreme few sets that actually manages to make it work. In fact, it's probably my favorite design in the entire Ultra catalog.

And, perhaps more importantly, it began what I consider to be a Golden Age for the Ultra brand. 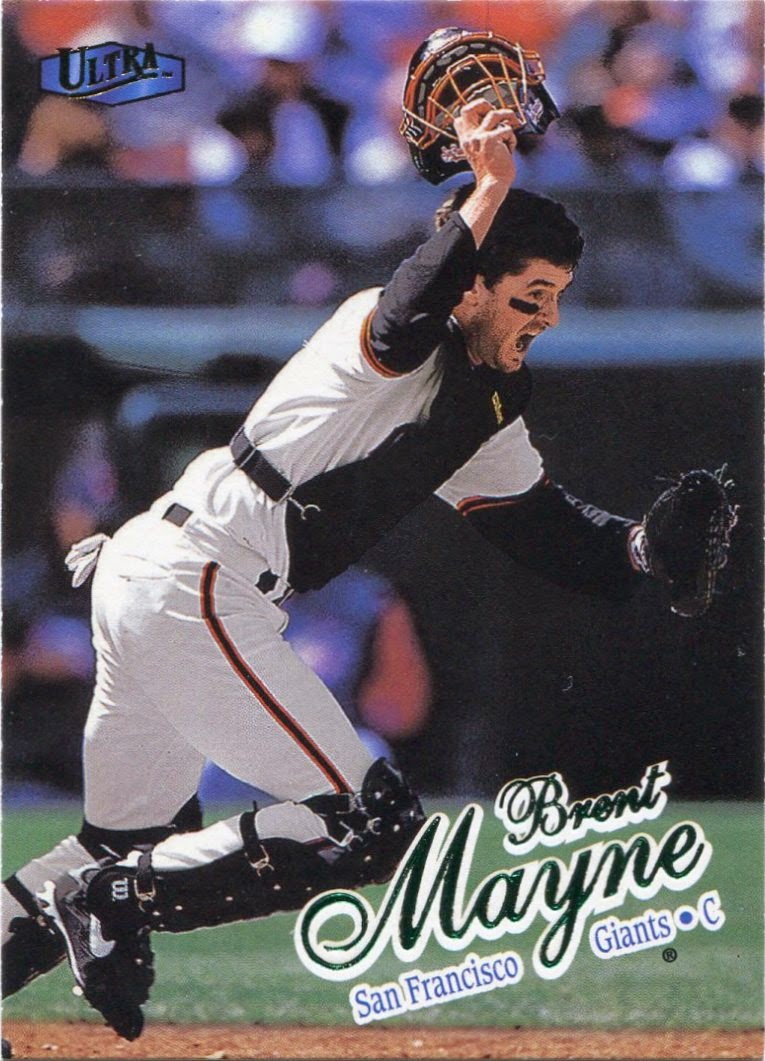 While they stuck with the cursive, Ultra ditched the rainbow foil the following year.

I don't particularly like the sans-shiny script, but, to me, 1998 was when Ultra really started to kick it up a notch in the photography department.

There are some glimpses of greatness in the years beforehand, but '98 was the first to offer solid image after solid image without much of a break in between. 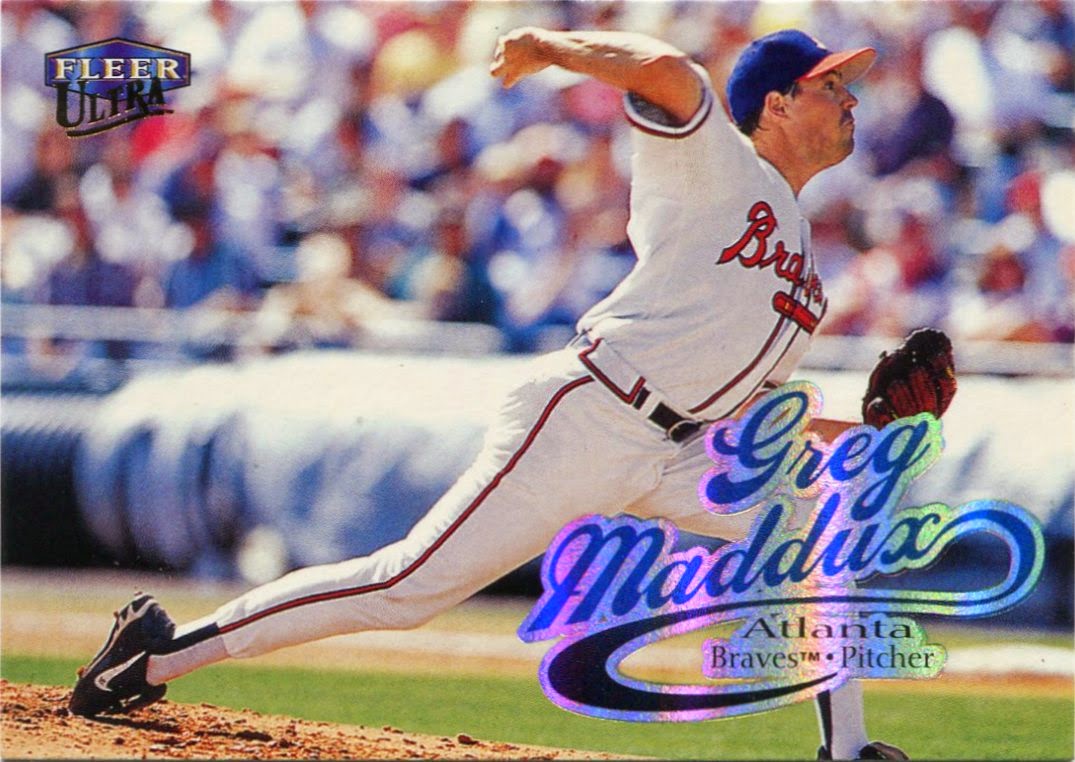 That trend continued the next year.

Though it didn't quite pop as much as it did in '97, 1999 Ultra marked a return to rainbow foil. If this Maddux masterpiece is any indication, the brand was firing on all cylinders at this point.

All we seem to hear about here in 2015 is Stadium Club, Stadium Club, STADIUM CLUB!!!!! I'm as guilty as anyone else. But what sometimes gets lost to history is the fact that Ultra was right on par with Stadium Club by the time the '90s were coming to a close.

Pound for pound, there wasn't much difference between the two. 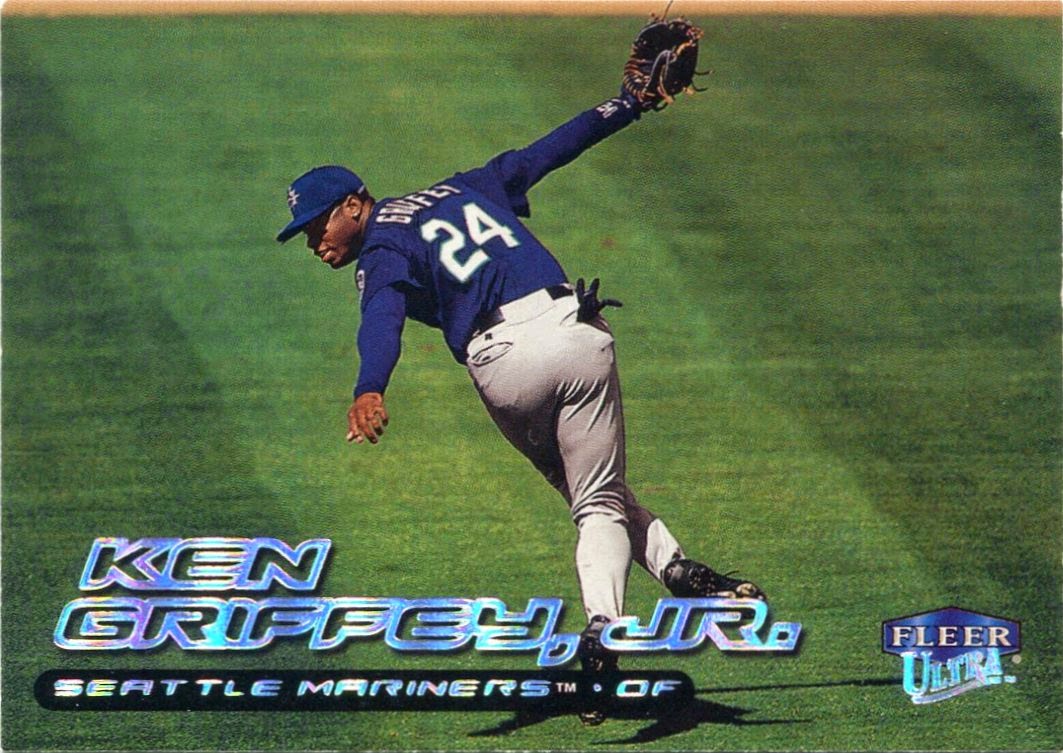 Ultra kept throwing haymakers as the world moved into a new millennium.

Strictly in terms of photography, 2000 might have been the cream of the crop for Ultra. I've dug and dug and dug and I'm sure there are still a ton of fantastic images flying under the radar in this set.

I think Ultra knew that the cursive script was becoming a little stale. Even though they switched to more block-like text, they knew enough to keep the rainbow foil. 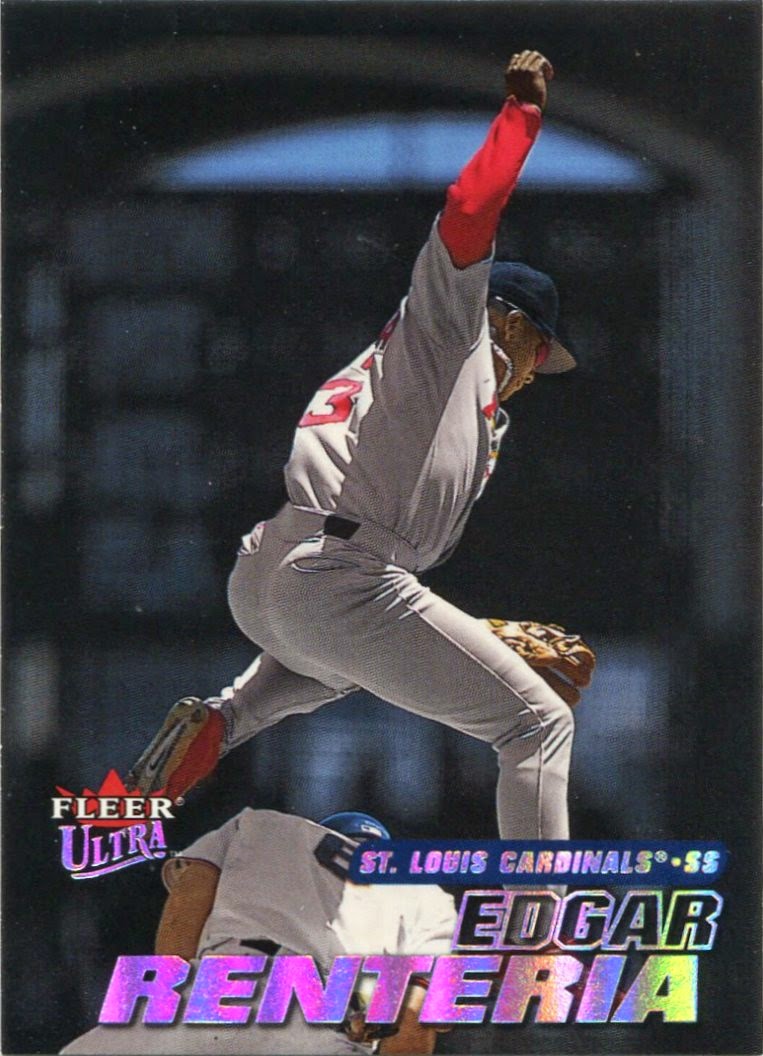 They responded with yet another gem in 2001.

The beautiful, action-packed photography was still intact. Ultra stuck with the block letters/rainbow foil combo, but, learning from the 1992/1993 fiasco, made it fairly distinguishable from the year prior.

Unfortunately, it would be the last truly great set Ultra would create. 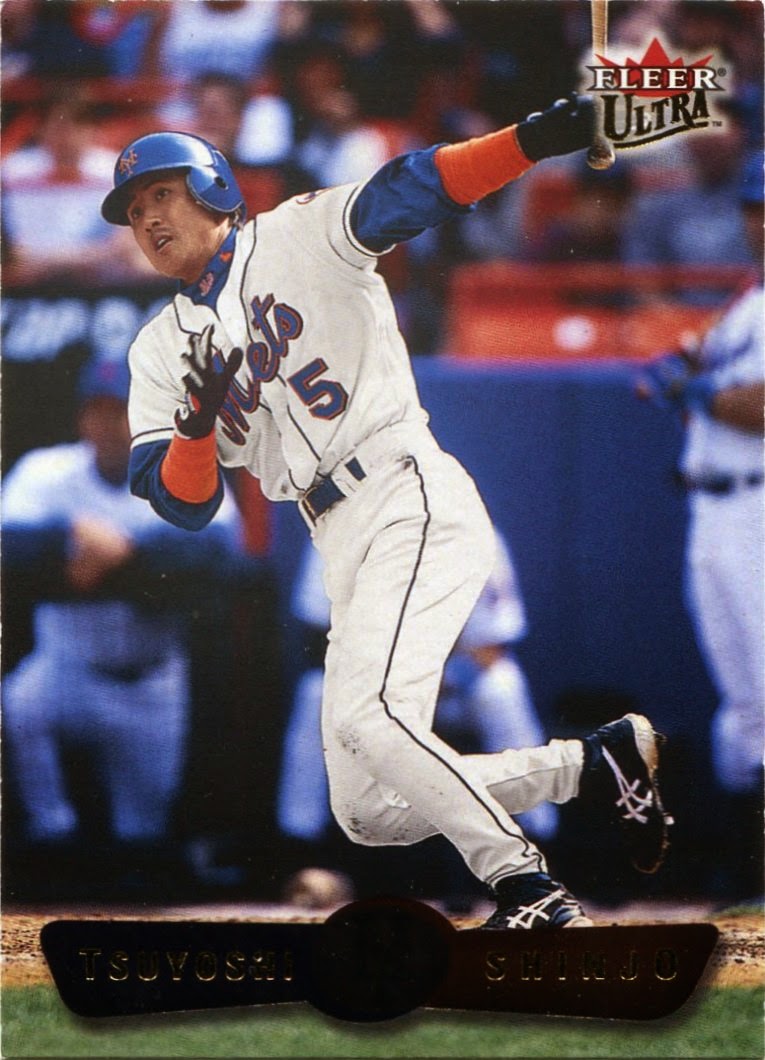 Only now am I realizing how many parallels can be drawn between Ultra and Stadium Club.

Both were born in 1991. Both went through a Golden Age in the late '90s. Both started fizzling out right around 2002 or so. (Unlike Ultra, though, Stadium Club would be revived later on.)

It seems like Ultra tried to copy Topps in 2002 with the ugly gold-foil-over-a-dark-background look. The quality of the photography took a noticeable dip as well.

Maybe it would only be a hiccup. 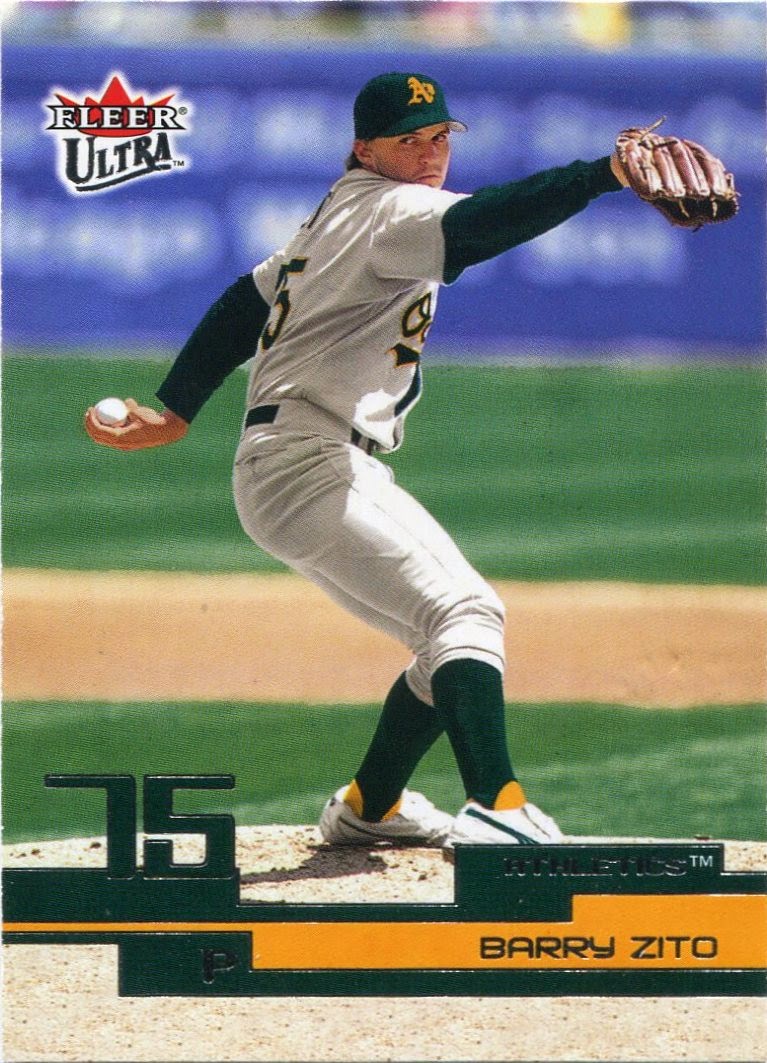 The end was near for Ultra, and I think the last handful of unimpressive designs show that. Between the foil, clashing colors, and oddly large uniform numbers, 2003 is probably the only over-the-top layout in the Ultra catalog.

It became obvious that the brand was on life support. 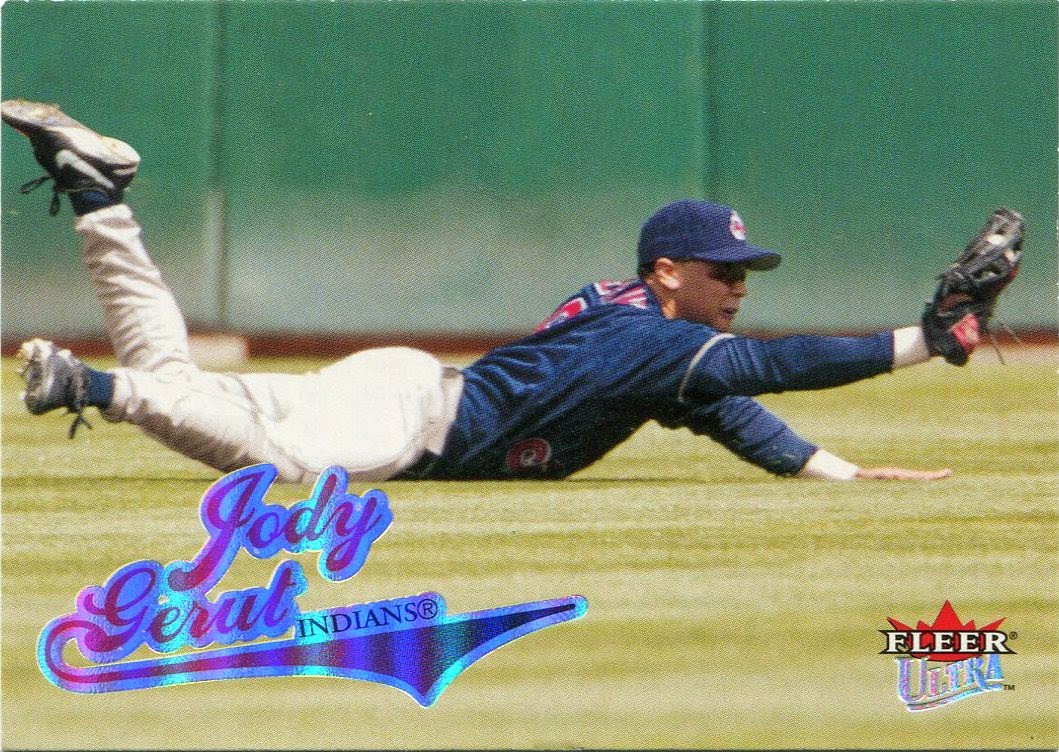 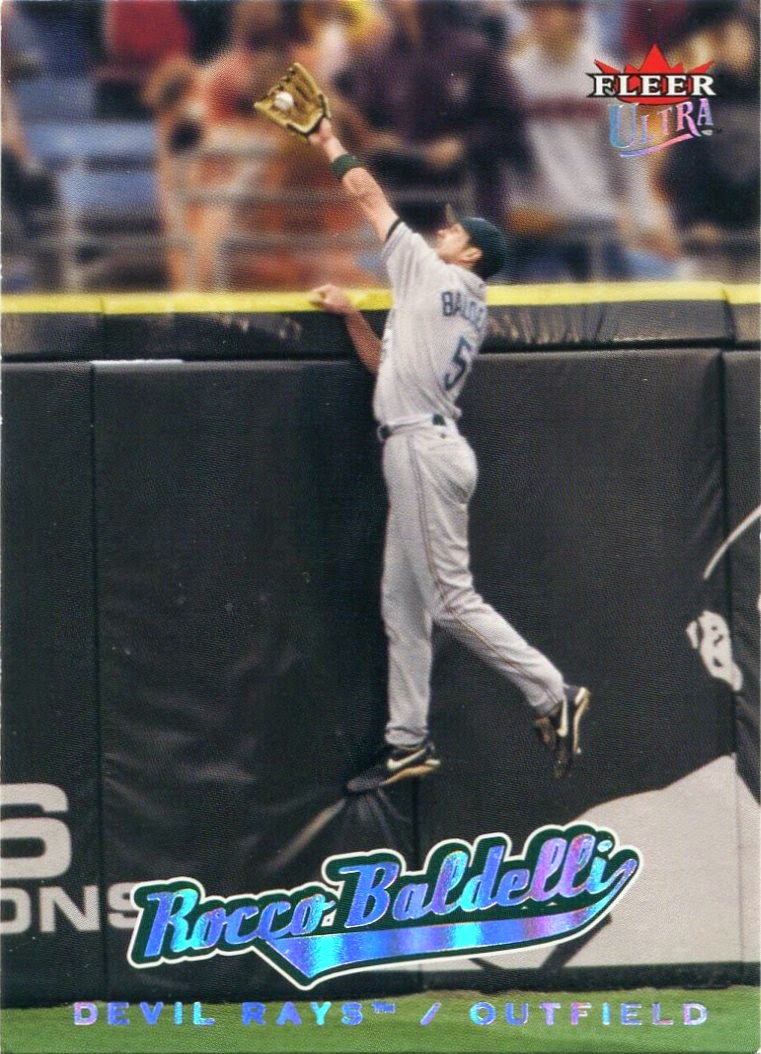 I still have a hard time telling these two apart. And, while I can appreciate Ultra trying to capture the cursive glory days of the late '90s, there was just something missing from these two designs. I can't put my finger on exactly what it was.

The glory days were gone. 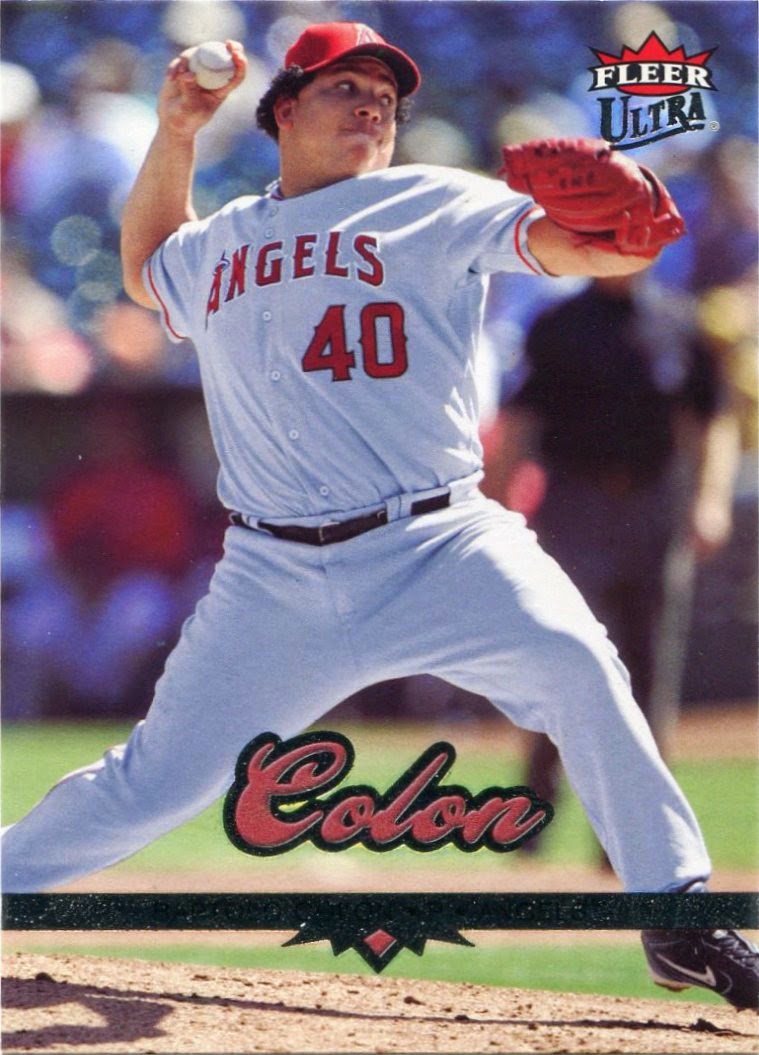 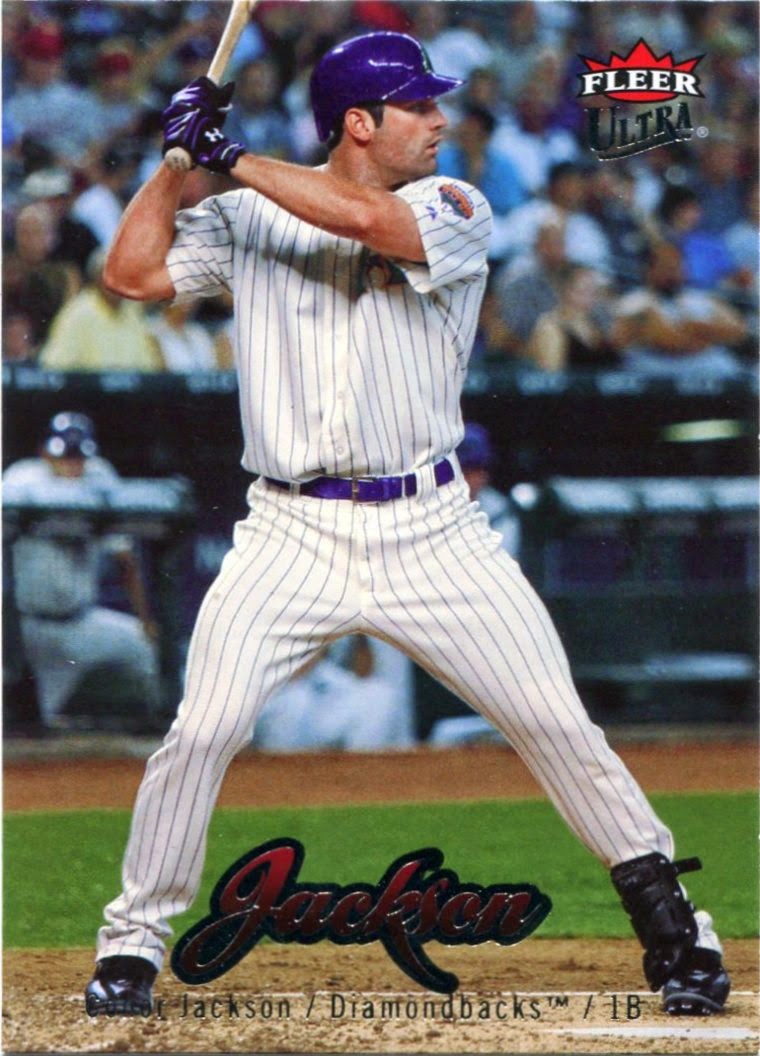 While the designs may be painfully bland, I'll always have a bit of a soft spot for Ultra's final years. I broke back into the hobby in late-2005/early-2006, and I bought a decent amount of both of these sets during those first years.

I always see dozens of packs of 2007 Ultra in the $1.49 section of my local Target. I'll still pull the trigger on one every now and then, even if I know the design isn't anything special. I owe it to Ultra.

If anything, I praise Fleer for sticking with the brand until the bitter end. As Donruss had done two years before, Fleer waved goodbye after 2007, closing the book on Ultra's long and fruitful seventeen-year run.

I guess I wrote this post because I like to honor parts of this hobby that don't otherwise get a lot of pub. Even after seventeen long seasons, Ultra almost seems to be all but forgotten here in Topps-heavy 2015. The brand may not have always been perfect, but seventeen years of anything is worthy of a standing O.

It's about time Ultra gets the credit it deserves.
Posted by Nick at 6:15 PM

Great post, Nick. I had never seen some of the designs that came out during my break from collecting, so it was cool to see the brand start to finish in a single post.

Very nice coverage of Ultra !
I'm one who was collecting through the entire run. They did get off to a slow start but turned out some really nice cards toward the end.

Because of my extended absence from collecting, I saw the front end of these some from the cards my younger brother had -- and then I'm lost. I like a lot of the full-bleed photos, but they were awfully repetitive in design. But, I'd rather have the solid B+ sets that show up here than having, say, 4 sets using the same photo.

I like the 92 and 93 sets a lot. Although the designs were similar, the cards looked so much better than what was out at the time.

I couldn't tell at least half of these designs from any other, especially any of the sets with cursive. Strangely enough, I can sort out 1992 and 1993 at a single glance. I guess you had to collect them when they were fresh.

People were really excited about 93 Ultra back then, I remember how we really loved the backs of the cards (and those cards have a very special smell too !). What I really, really loved about 94 Ultra (and after that I could'nt get my hands on any packs) were the inserts. Tons and tons of fun ones to chase.
Nice post !

The 1996-97 design- 1997 only in baseball- is one of my all time favorite card designs. I remember seeing it for the first time back in late 1996 when I got my first NBA pack. I was hooked then and it has stood the test of time well. I only discovered that they used it on other sports as well in the past couple of years, when I became active on the world of online card collecting.

Nice - My first round of collecting ended before the Ultra Peak - so to speak. I have a ton of 1992 Fleer Ultra, some 93, a few from 94 and then maybe a loose single or two from random card repacks purchased last year.

You make a good case for Ultra!

I've been a fan of Ultra since its birth, and would choose it over Stadium club any day. In fact, I can't help but recognize that "Ultraesque" feel to the Upper Deck cards after they bought out Fleer rights, at least its obvious to me they (UD) staring using Fleers technology. Great job as always Nick giving some due to a well loved product.

I loved '92 Fleer Ultra. That is how I will always remember the Ultra brand.