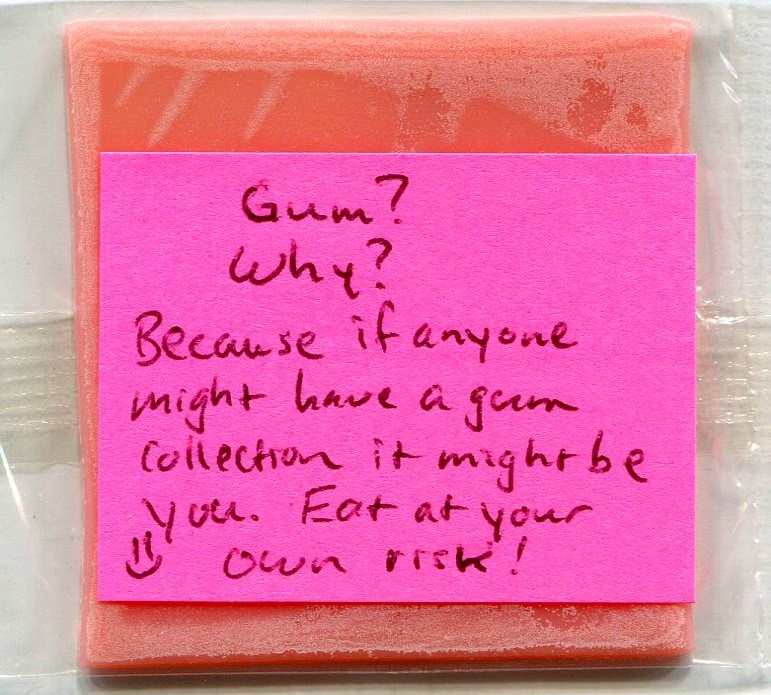 I realize I have more varied collecting tastes than most people.

My interest in the hobby stretches to so many different categories. Even in well over two years of blogging, I doubt I've covered them all.

Perhaps the greatest thing about the great people in blogosphere is the fact that they're willing to dig for the wackiest things I might want. I'm so appreciative that others have taken the time to look for "zero-year" or "autograph" cards for me.

It's gotten to the point where people are just sending me the craziest things they can find.

Tom, of the terrific blog "Waiting 'til Next Year", included a wrapped stick of gum in a surprise package recently. If anyone would have a gum collection, it'd be me.

Rest assured, I do not have a gum collection. 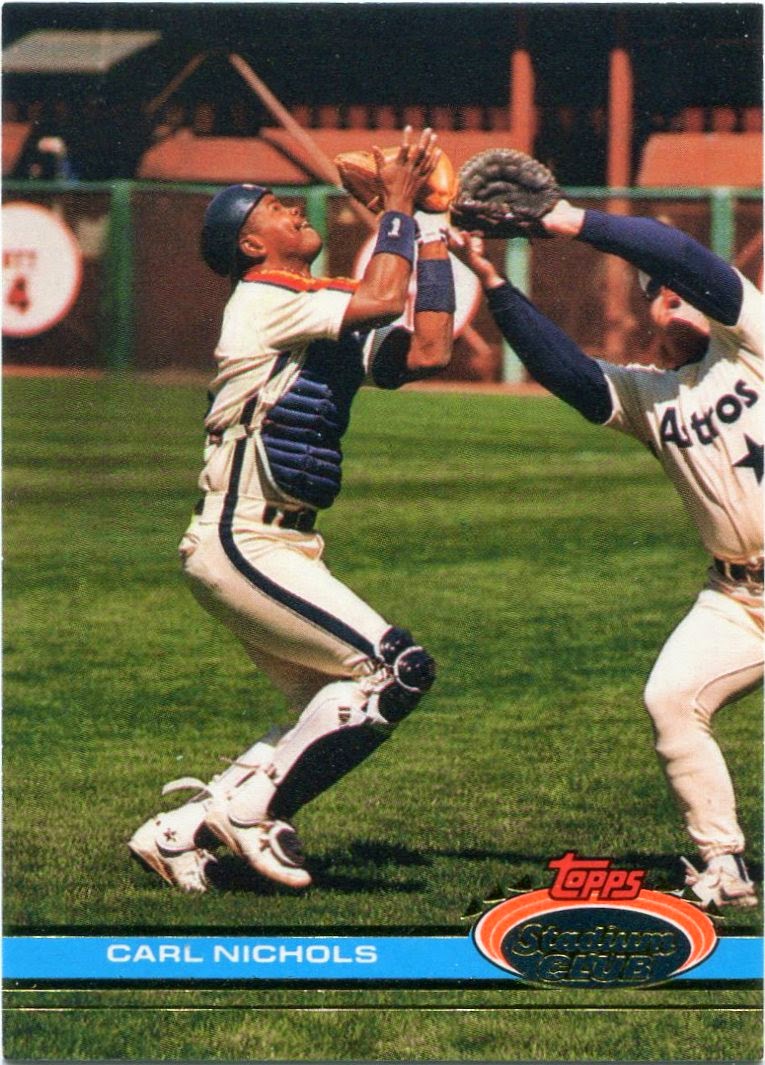 Like most packages I get, there wasn't a whole lot of consistency to what Tom sent.

The gum was followed by this terrific Stadium Club shot of catcher Carl Nichols. The angle of it gives the illusion that the former backstop is patrolling the outfield, though it's almost certainly a simple foul pop in reality.

Catchers in the outfield.

Now that would be something I'd collect. 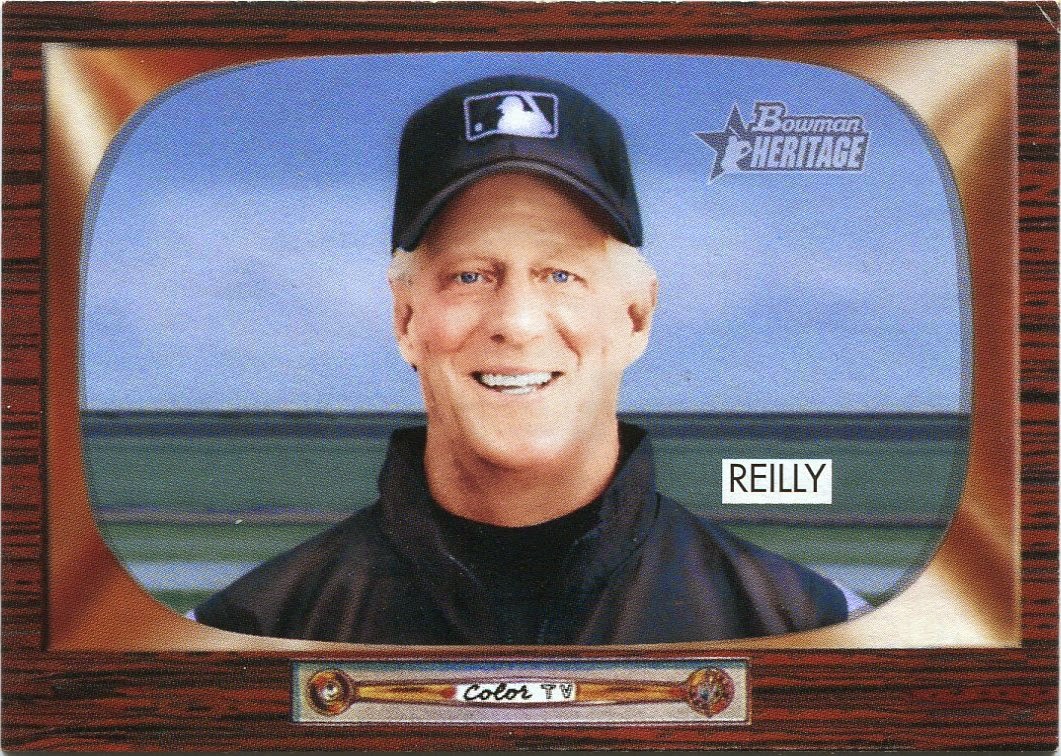 Though I've never specifically sought them out, I do enjoy finding cards of "outside the lines" subjects. 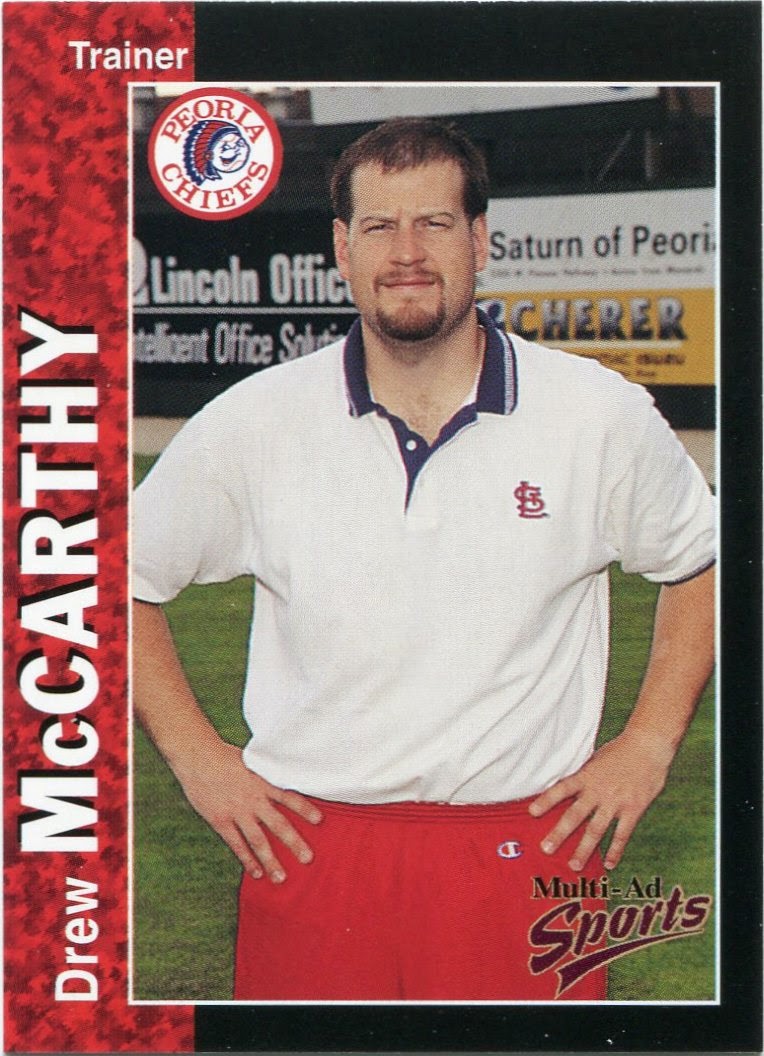 And let's not forget trainers.

One of the great things about minor league sets are the fact that a lot of them include odd things like this. It's not something you'd ever see at the big-league level.

Could you imagine opening a pack of Topps and pulling a trainer card?

People would be up in arms. 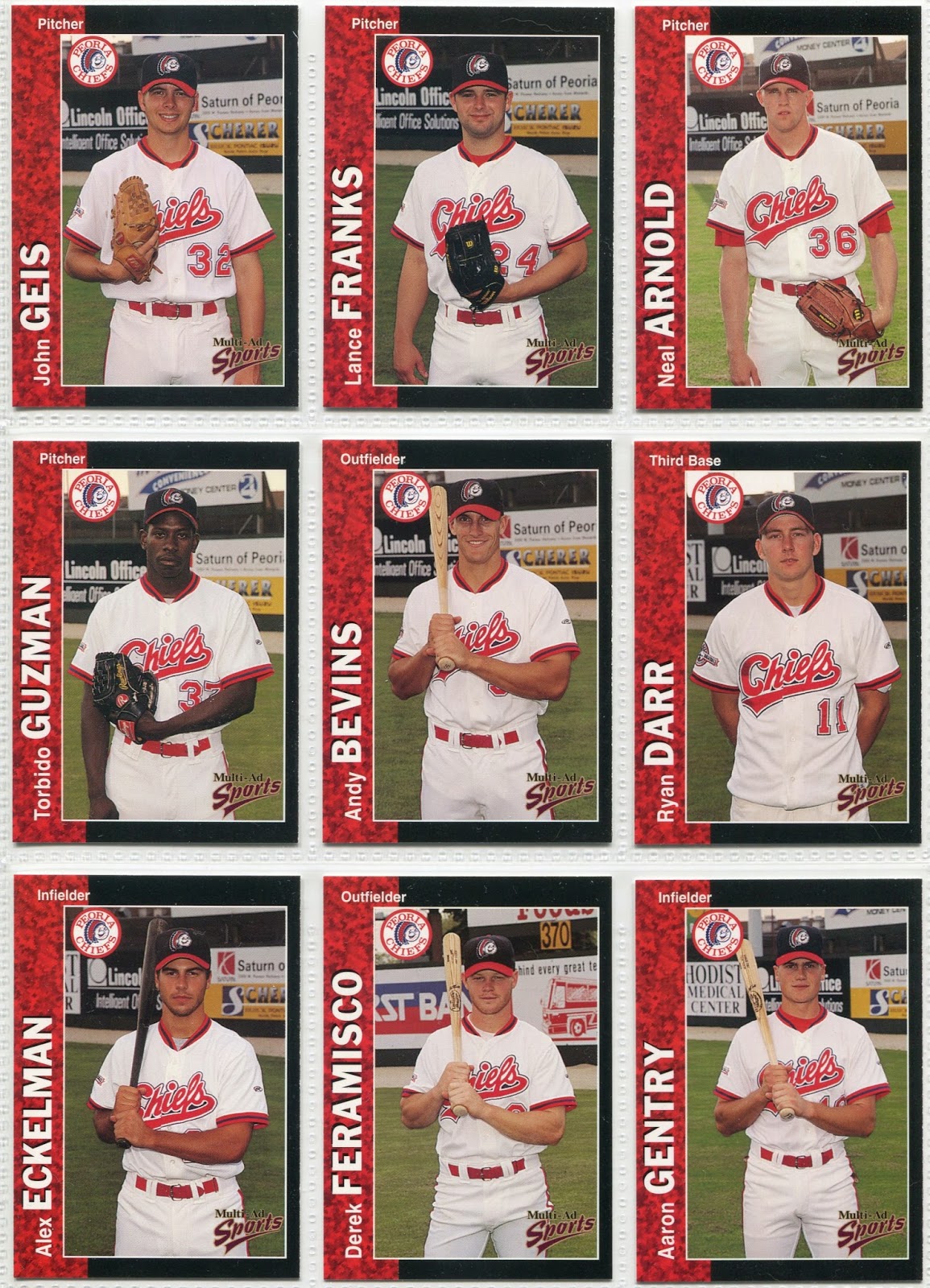 They're the single-A affiliate of the Cardinals. Tom lives in Peoria and had a bunch of these lying around. I've always enjoyed minor league cards, so he found a good home for this one.

None of the guys you see here ever made it to the bigs. Most never got out of the low minors. I'd bet that a lot of these guys are working regular everyday jobs now. That's part of the charm of minor league sets.

The names of Ryan Darr and Aaron Gentry may be lost to history, but they can always say they had their very own baseball card. 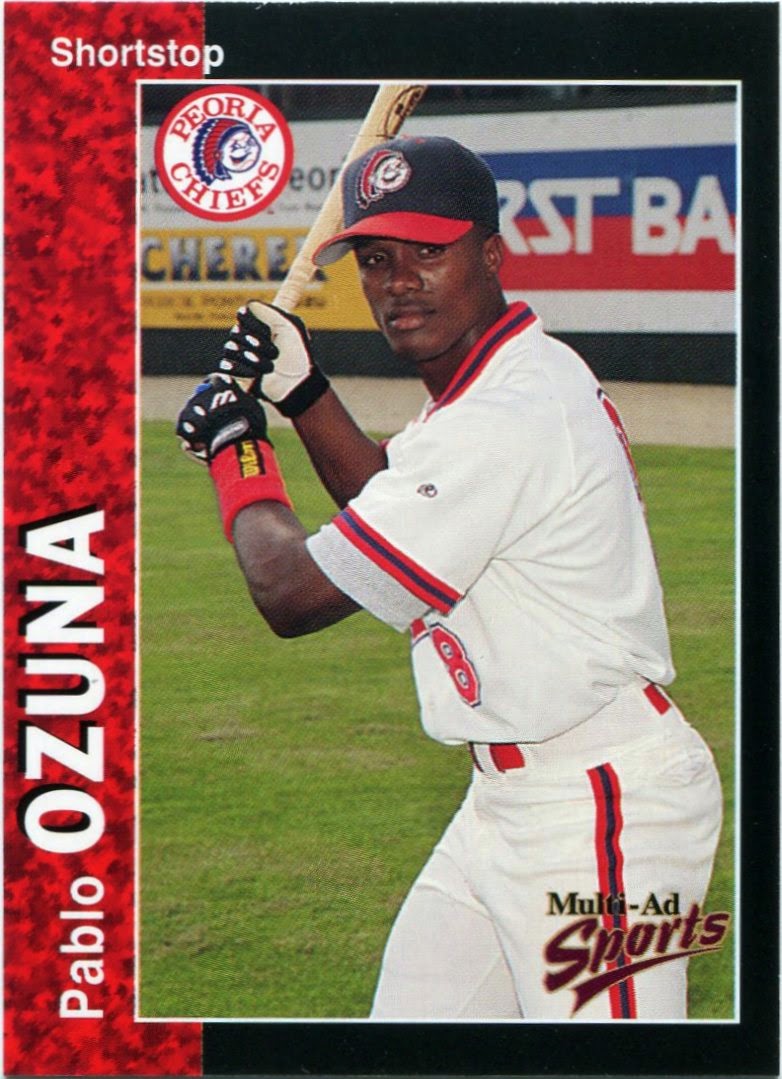 I'd only heard of two guys in the entire set.

Though he started in their system, Pablo Ozuna never played for the Cardinals. He came up with the Marlins in 2000 as a much-hyped prospect. Though he never quite panned out, Ozuna was a useful utility guy during his seven-year career.

I'll always remember him as a valuable part of that 2005 Chicago White Sox championship squad. 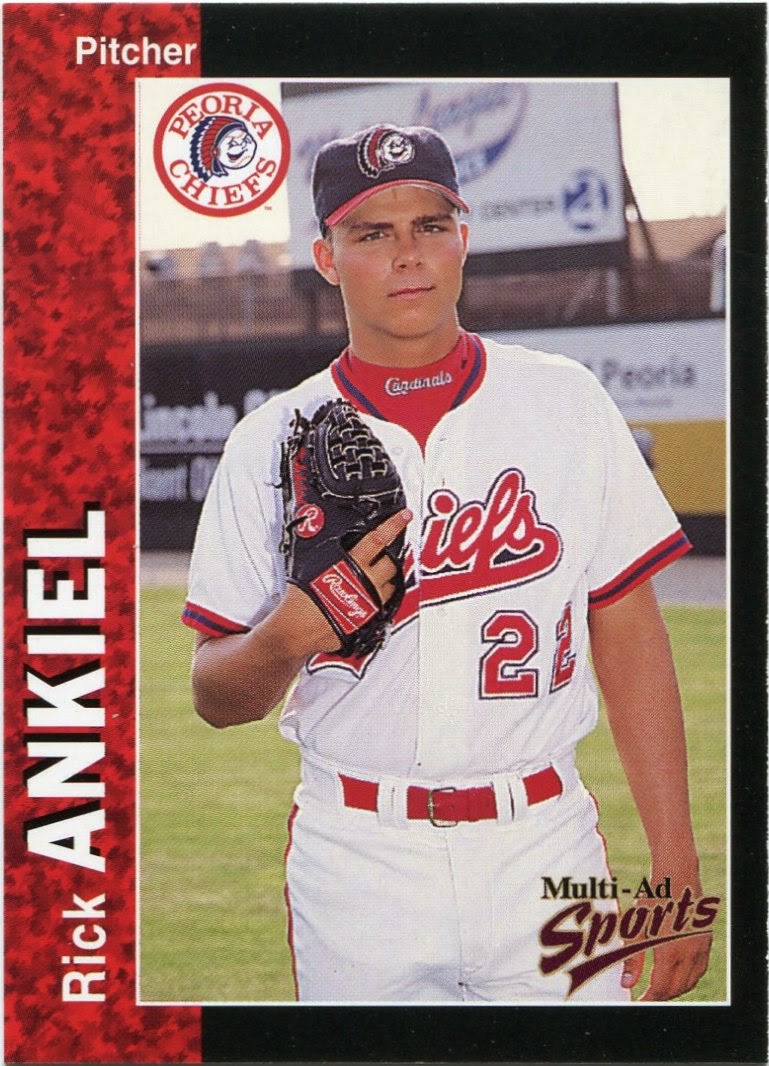 This was basically the reason Tom sent this set my way.

He remembered that I collected Rick Ankiel from my past posts, and thought this would make for a nice addition. Boy, was he right.

This is probably Ankiel's first card as a professional. He began his rapid rise through the Cardinals system with Peoria in 1998. He advanced to high-A ball after just seven games with the Chiefs that year.

Ankiel was just 19 years old when this card was released and had no idea where his career would take him. His unexpected future as an outfielder wasn't even a glimmer in his eye at this point.

It's just one of the many things to love about minor league sets.

Whether it's gum, umpires, or minor leaguers, I'm always willing to take on whatever other people want to send me. I suppose I might have to pare down my cards at some point in the future, but that's a long ways down the road.

For now, there's room for everyone in my collection.
Posted by Nick at 4:11 PM

No gum collection? Oh well. It was worth a shot!

I still like that Ankiel card... even if he was affiliated with the Cardinals at the time. I'm glad you like it, too!