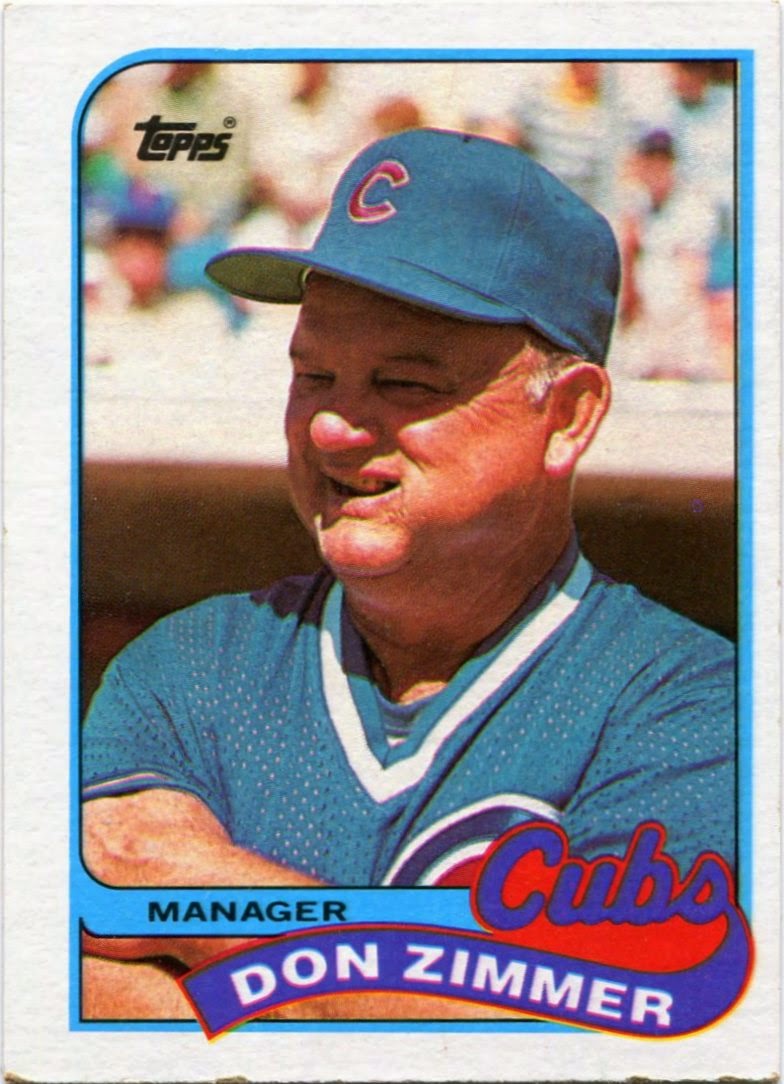 The game of baseball lost a good man yesterday.

Don Zimmer passed away at the age of 83 last night. He was a true baseball lifer and perhaps the greatest ambassador the sport has ever seen.

Zimmer played for the Dodgers, Cubs, Mets, and Senators during his twelve-year big league career. He even made an All-Star team with the Cubbies in 1961.

He's better known for his tenure as a manager and coach. He managed the Padres, Red Sox, Rangers, and Cubs. Zimmer served as a coach for many teams throughout his career, most notably during the Yankees dynasty of the late '90s.

He was in the front office of the Rays at the time of his passing, the result of over six decades in the game of baseball.

I'm proud to say that Don Zimmer is one of the few managers who I actively collect. I've hunted down as many cards of his as I can find, and I have to say that his '89 Topps issue is my absolute favorite. It perfectly captures his effervescent personality.

In honor of "Popeye", I've decided to count down my five favorite manager cards in the history of the hobby. 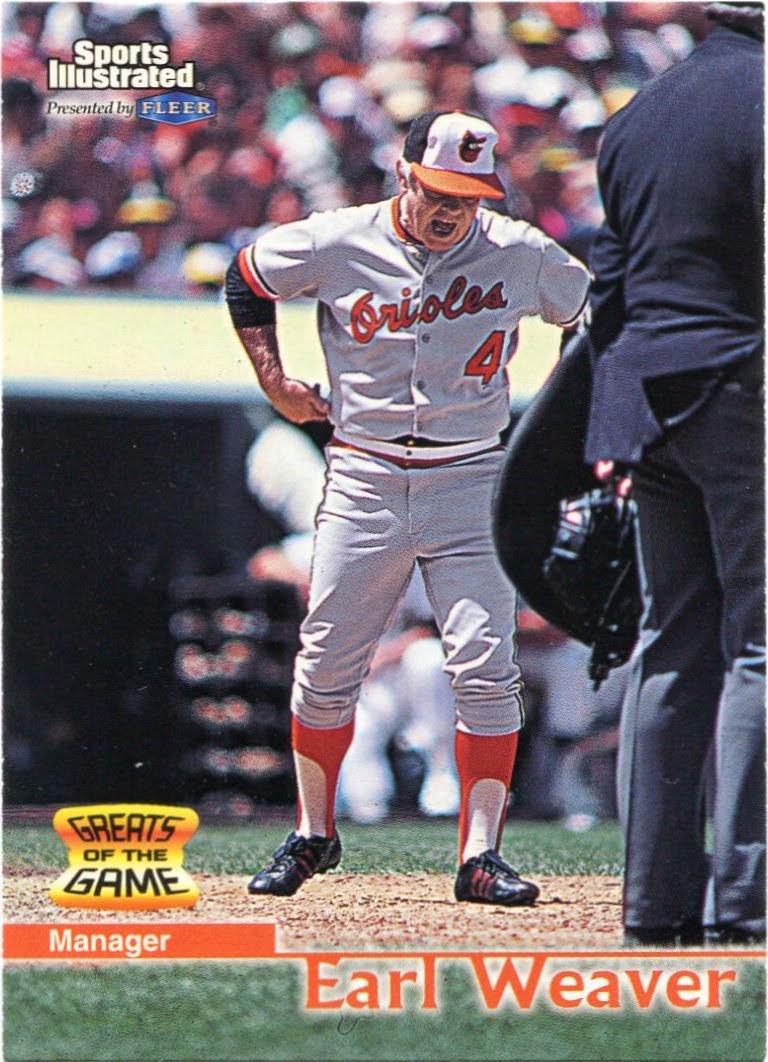 As you might know, manager cards are becoming a lost art in this hobby.

Topps hasn't included skippers in their Flagship set since 2009. They'd been going a bit stale since well before then, so I can't say I was too sad to see them go. They're still featured in Heritage, but I'd much rather see a more devoted effort towards them in Flagship.

When done right, however, manager cards could capture the entire personality of a skipper in one shot. That's exactly what we have with this terrific photo of the late Earl Weaver.

Surprisingly, the hot-headed Oriole manager didn't have any "argument" shots issued during his career. (None that I know of, anyways.)

Fleer pretty much summed up Weaver's personality in their vastly underrated '99 SI Greats of the Game checklist with this terrific image.

I'd like to believe he was ejected seconds after this photo was taken. 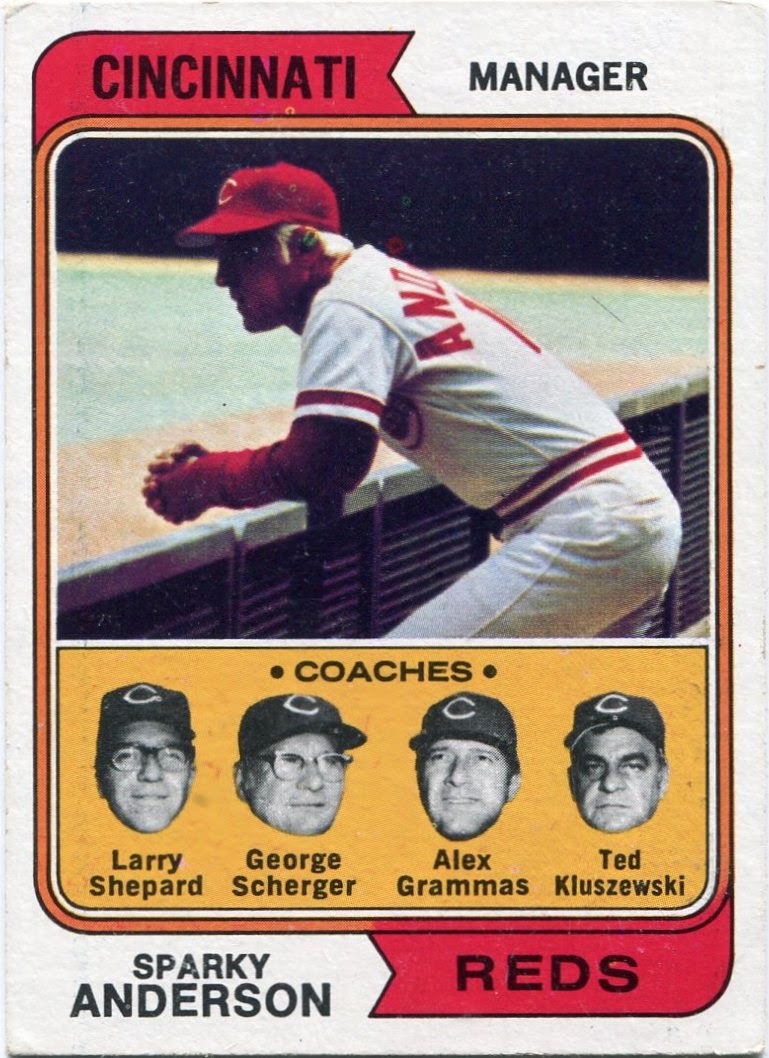 I've decided to limit each manager to one entry on this list.

Otherwise, this post would've been dominated by a few skippers who you'll soon see. Instead, I'll be listing honorable mentions for managers that had other notable cards issued during their respective careers.

Sparky Anderson was one of the greatest minds baseball has ever seen. It's only fitting that the man received quite a few terrific pieces of cardboard issued during his career.

This one, though, has to rank as my absolute favorite. It features "Sparky" deep in thought, possibly pondering a hit-and-run play or a double steal. Whatever it was, I'm sure it worked.

If manager cards are ever to return, I think Topps would benefit from taking a page from their '70s designs. Skippers should receive the prime billing, but I'd like to see coaches receive a bit of recognition as well. Coaches rarely, if ever, see the light of day in the current hobby.

I think it's time we changed that. 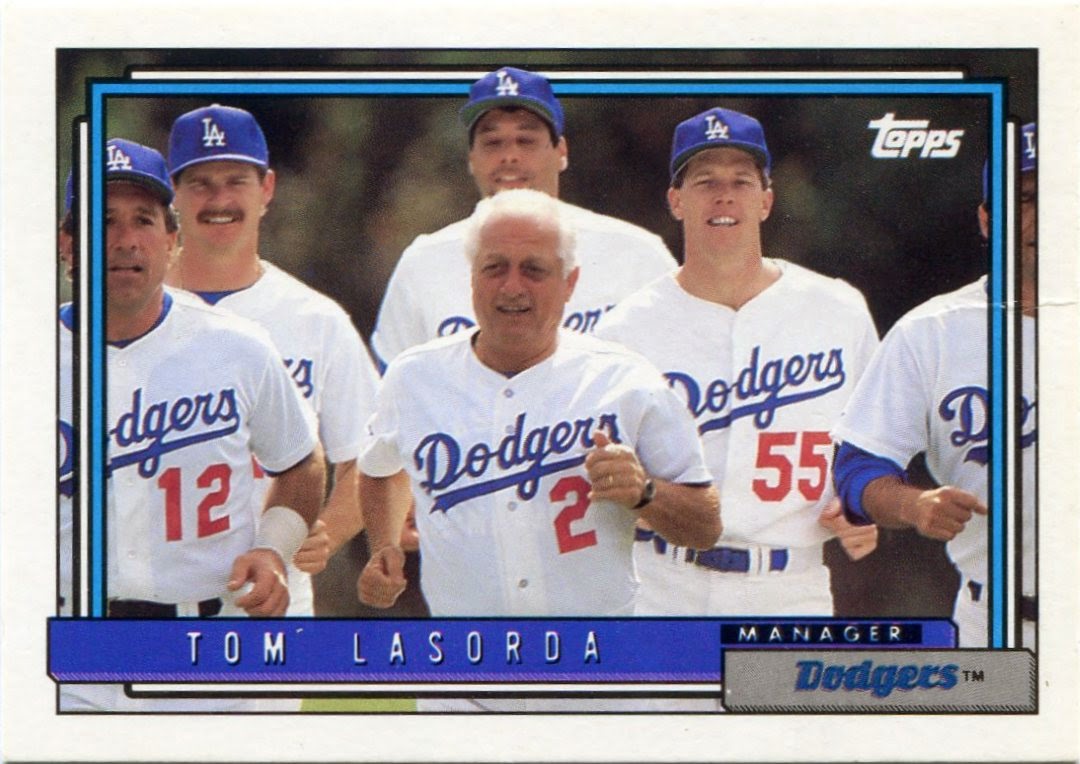 That's likely because he was one of the most colorful personalities the game has ever seen.

After a short and mediocre pitching career, Lasorda went on to have a long and successful 21-year managerial tenure with the Dodgers. From what I've read, he was extremely popular amongst his players.

Keep in mind that the man was 65 when this card was released. 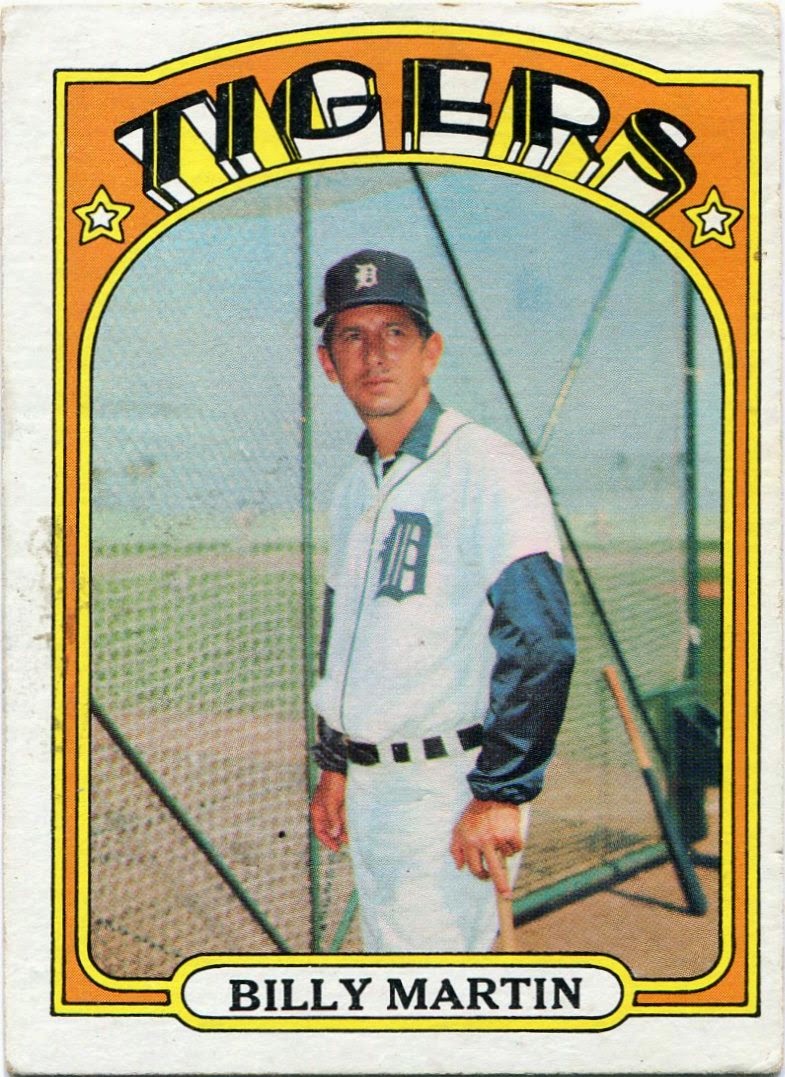 This might be the consensus pick for the best manager card of all-time.

I came very close to giving it the top slot in this countdown. While this card may not be my #1, Billy Martin is probably my favorite manager in the history of baseball.

Plus, there's little denying that this is one of the most unintentionally hilarious pieces you'll ever find.

This was one of the first cards I wanted when I first started collecting as a wee lad. I was probably eight or nine when my dad and I tracked down a copy at a (now extinct) local shop.

Even then, I could appreciate the humor of Martin subtly flipping the bird to a poor Topps photographer.

I consider myself a mature 22-year-old college student here in 2014, but I still find this card hilarious. 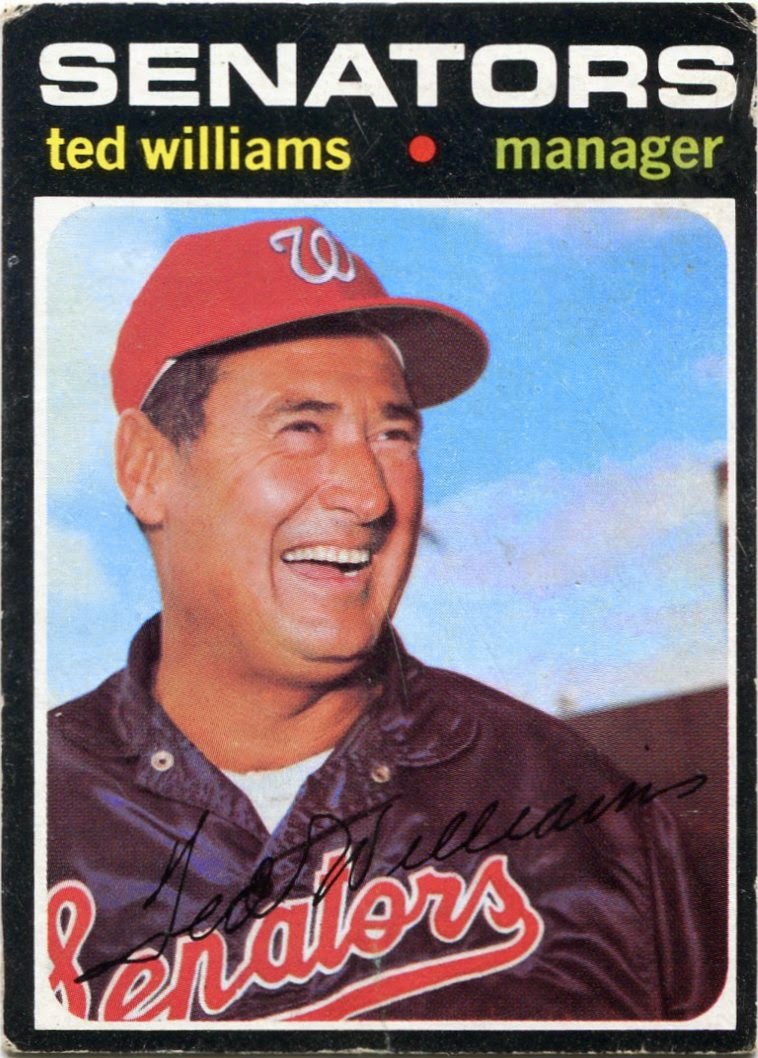 I can't say for certain what my very first baseball card was, but I do know that this was one of the first great pieces I ever owned.

Like the Martin, my dad and I picked it up when I was first starting to get interested in the hobby. It came from that same local card shop as well.

The odds of me ever owning an authentic Topps card of "The Splendid Splinter" during his playing career are slim. His manager issues, however, won't break the bank. I don't remember what I paid for it, but it couldn't have been more than a few bucks.

To me, this has always been one of the premier cards in my collection. Anyone who collected in the '70s probably remembers this piece.

Although I didn't find my copy until the late '90s, the slightly off-center image of a cackling Ted Williams will forever be ingrained in my memory.

That would've been a darn shame.

Manager cards belong in Flagship. It's cool that they're in Heritage, but 2065 Heritage should have manager cards, too...

Well done Nick. When I heard of Zimmer's passing, I was thinking that you should do a post on Zimmer. Thanks for the great reads.

Glad to see that Ted Williams made the list. I'm also big fan of the Lasorda card where he's in the golf cart. I think it's the 1988 Topps.

I keep thinking about collecting manager cards too. It doesn't seem like Topps does all the managers in Heritage now, just a select few.
I second the notion on coaches too. A couple of my player collection guys are coaches, so they would be nice oddball current issues to get.
They don't usually parallel the managers either.

Definetly agree with the first two