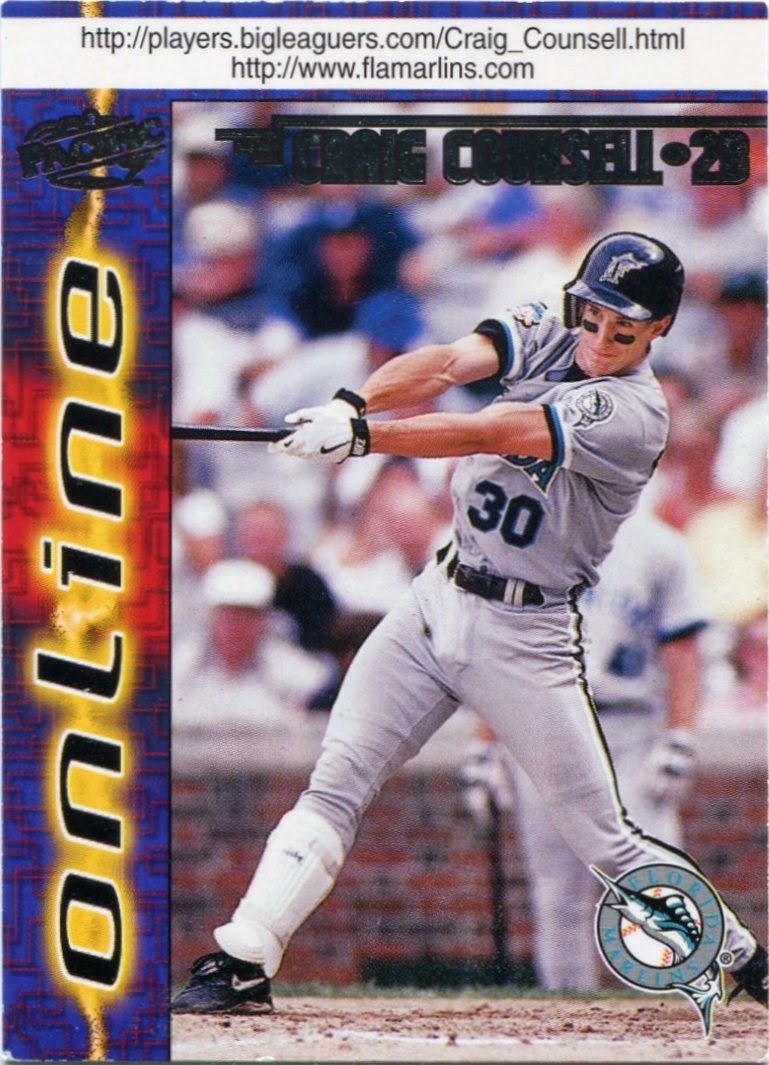 I'm fascinated by the future.

My realities are based firmly in the present, but I'd be lying if I didn't say I'm intrigued by where I'll be a month, a year, or even ten years from now.

I do know that I'll always be a baseball card fanatic. I may not have as much time to devote to cardboard in ten years, but that drive to collect is something that's basically in my genes by now.

I guess that brings up a similar question that I've pondered on many occasions.

Where will the hobby be in ten years?

This is hardly a cut-and-dry topic. It's pretty much impossible to predict where baseball cards will be in a decade.

Just look at something like 1998 Pacific Online. A whole set that revolved around the Internet. Ten years before that, 1988 Topps was on the shelves. The World Wide Web was barely a glimmer in anyone's eye. Upper Deck wasn't even around yet.

You think anyone could've predicted anything like that back in the late '80s?

Nevertheless, here are my visions of the hobby in 2024. 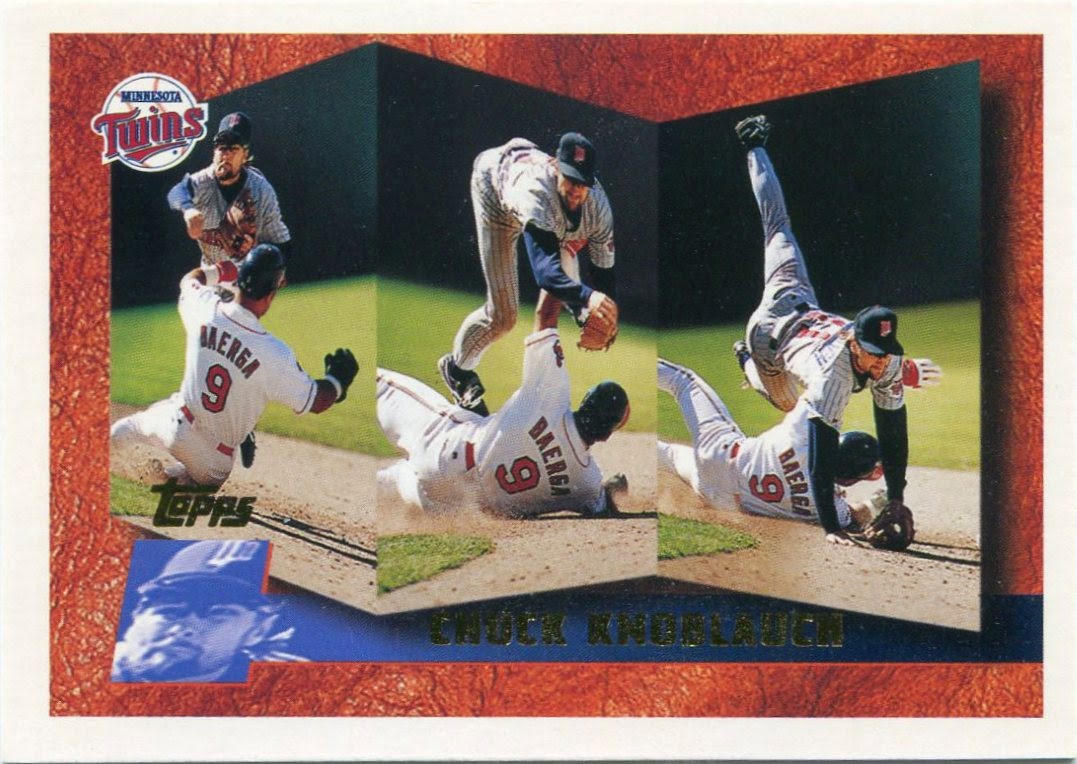 While we're on the topic of sets like Pacific Online, I think we'll start to see a bit of '90s cardboard nostalgia in ten years.

People tend to write it off as sort of a lost decade, but I have a hunch that it'll make a comeback in some way, shape, or form.

By 2024, the collectors who grew up during the '90s (like myself) will be hitting their mid-thirties. And I have a feeling that some of them will want to see throwbacks to some of the wacky innovations that came from the decade.

I'm talking things like sparkly inserts, psychedelic features, and just generally crazy cards such as the Chuck Knoblauch you see above.

In ten years, maybe we'll see the game's greatest stars being featured on the 1996 Topps design. 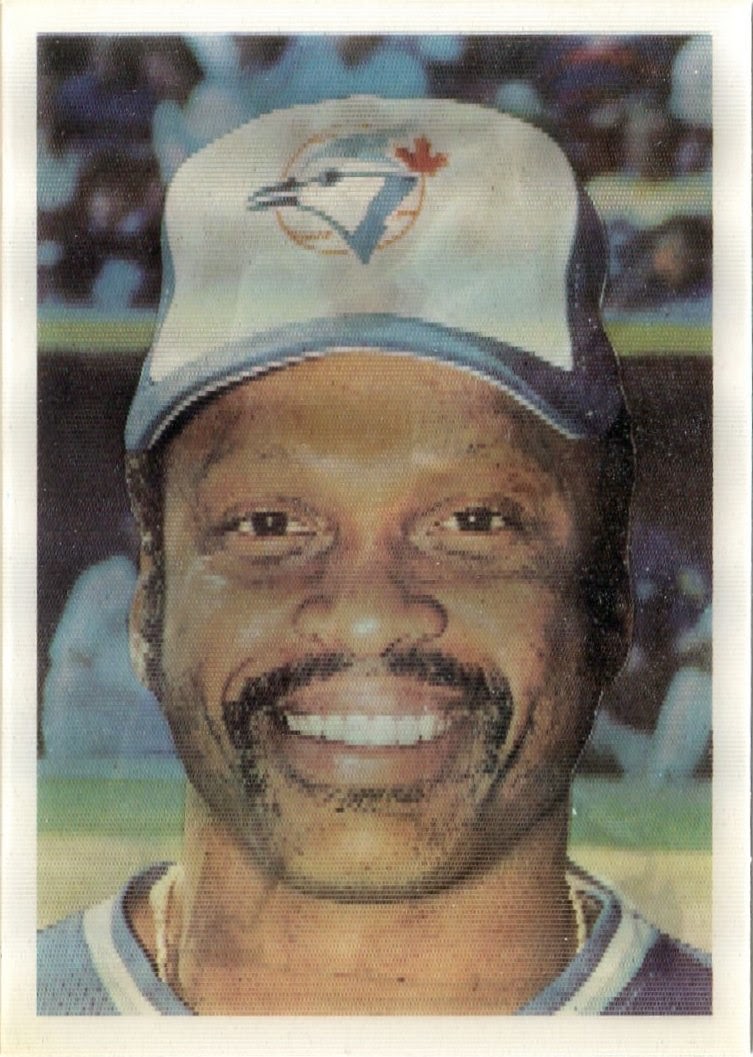 3-D cards have been around for a long time now.

No matter how many I get my hands on, though, they're still a trip for me.

By 2024, I don't think it would be beyond the stretch of imagination to have real, actual moving cards. Straight out of the world of Harry Potter and perhaps something like this.

Instead of having a card that simply celebrates Hank Aaron's 715th homer, wouldn't it be cool to have one that actually played a video of the historic dinger?

I wouldn't be surprised to see something like that come 2024. 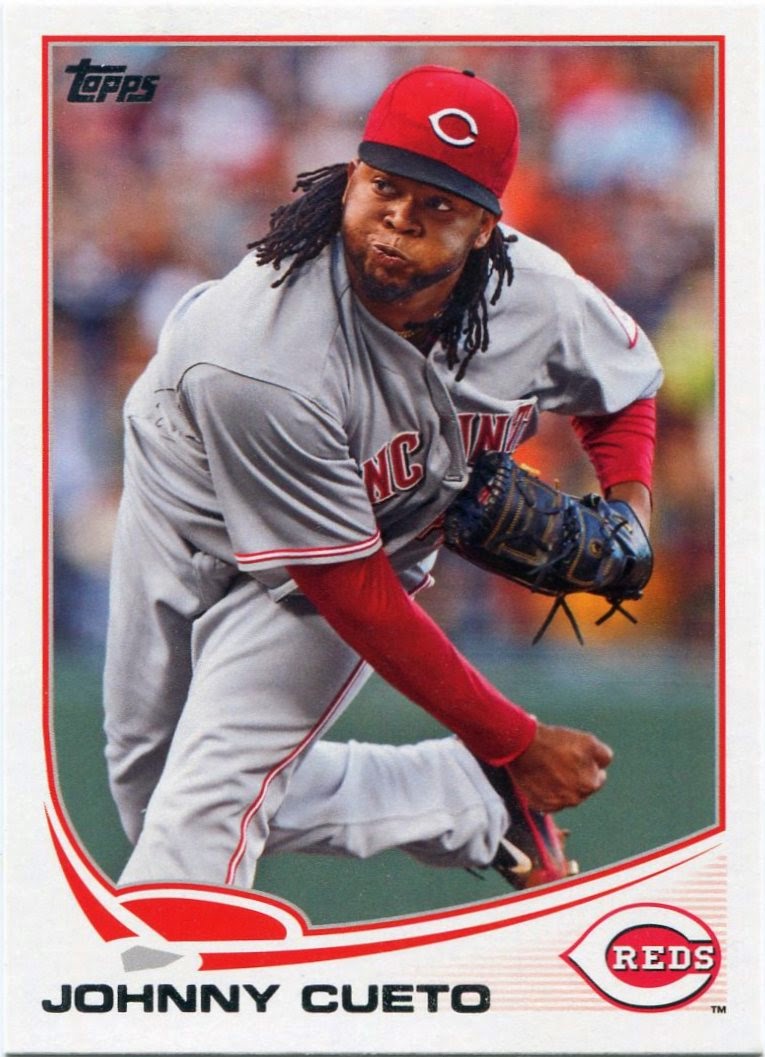 We here in the blogosphere take a lot of pride in trading.

A lot of what you see around here are trade posts. That's a testament to the great amount of swaps we have going across the blogs.

Still, I can't help but think that modern technology could add a virtual extra layer to trading.

Say, for instance you pull a card of Johnny Cueto from a pack of 2024 Topps. But, for whatever reason, you don't need it.

What I'm thinking is that future cards can have a built-in trading database inside that allows you to network with other collectors that might need your outcasts.

You find another trader who offers a Mike Trout for the Cueto you pulled. The trade is agreed upon and, boom, your Johnny Cueto instantly transforms into your desired Trout. No post office necessary.

Now, I'm about the furthest from a technology buff as you'll ever find, so I have no idea if something like that is even possible.

It's sure fun to think about, though. 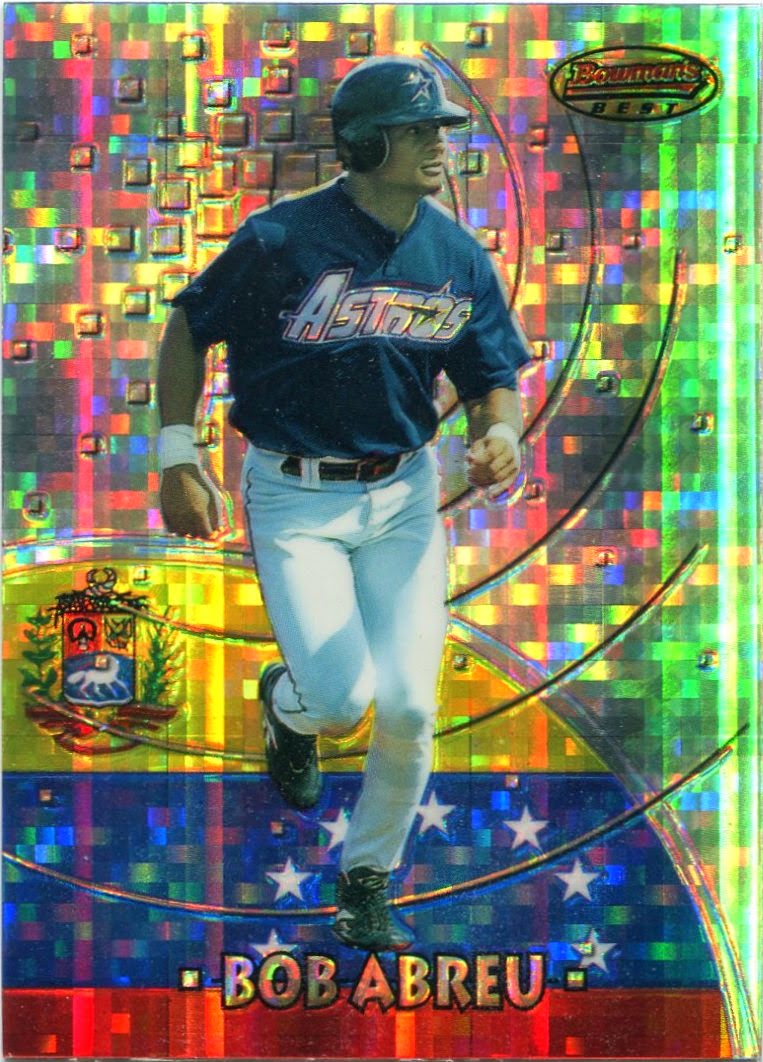 At this point, you'd think that card companies have just about milked the refractor for all it's worth.

Between blue refractors, x-fractors, and even atomic refractors, I'm not sure what's left with these things.

Then again, I've learned to never underestimate the money-hungry methods of companies and some so-called collectors. People would chase piss yellow refractors if they thought it'd make them a few bucks.

There's no telling how far it can go. 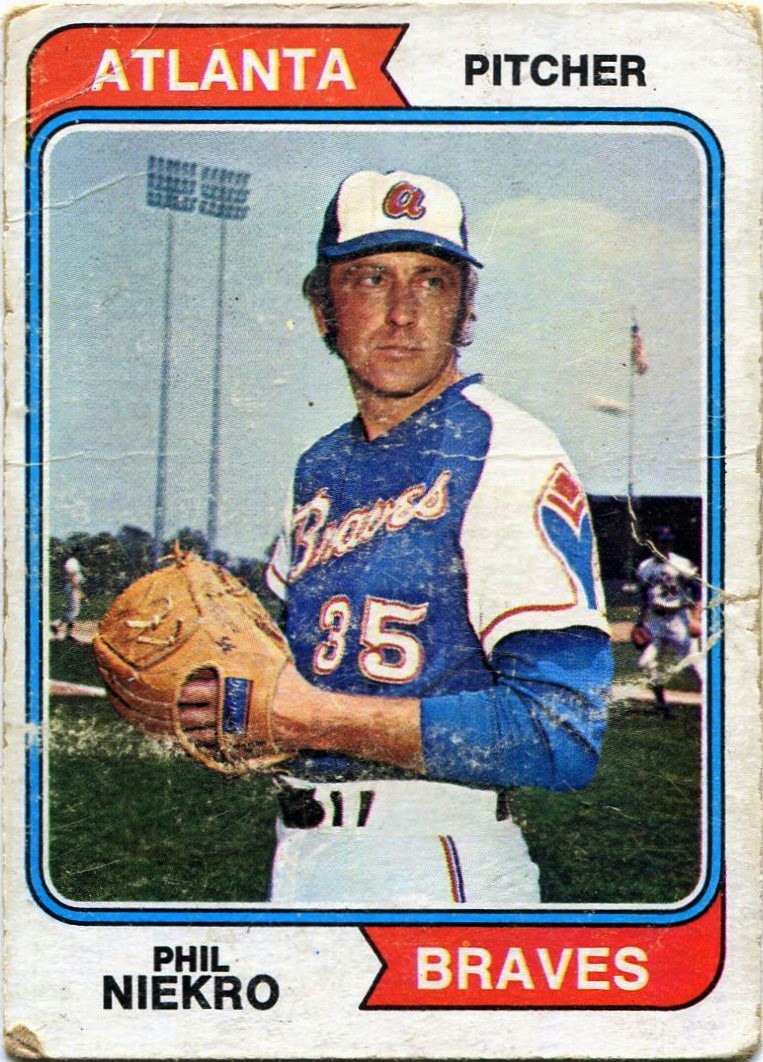 My last prediction is probably the most realistic.

I've heard a few other people mention this, and it does seem entirely possible.

Personally, I don't think we're too far off from seeing GPS microchips in our cardboard. If this ever comes to light, you'll actually be able to see the long journey your cards have endured.

This is one of those things that I wish was around forty years ago. I'd love to know all the stops my weathered '74 Topps Phil Niekro made in its long and fruitful existence.

Maybe it traveled to six different states before I finally found it at a card show. Maybe it's been here in Illinois the whole time.

I'll never know for sure.

Personally, I think some sort of GPS tracking device would be one of the coolest innovations this hobby has seen in a long, long time. 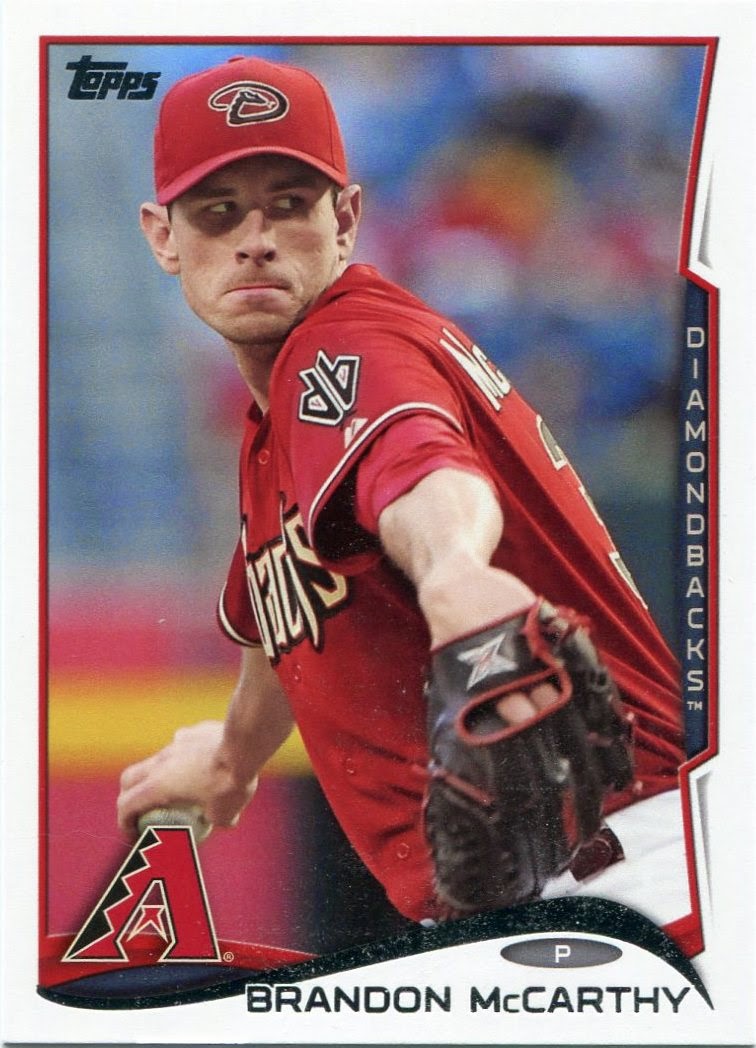 Perhaps the biggest question is one I haven't even asked yet.

Will there even be baseball cards in 2024?

I definitely think so.

People on the outside may try and say that the hobby is dying, but that really isn't true. It may not be as strong as it was fifteen or twenty years ago, but there's little doubt in my mind that baseball cards will still be around in the distant future.

Just like here in 2014, I truly believe that we'll all still have the privilege of finding packs of 2024 Topps at our local retail outlets in ten years.

I don't know what they'll look like or how much they'll be, but baseball cards will survive for the long haul.

I have no doubt that baseball cards will still be around in 2024. My big question is, will Topps still be the only game in town at that time? Will Topps even exist? Before you scoff, don't forget that Donruss, Fleer, and Upper Deck all seemed strong 10 years before they folded.

Part of what you describe for 2024 sounds suspiciously like the Topps "Bunt" app (save for the GPS chip). That's what concerns me more than anything -- that the collectors of the future won't want actual cardboard and will take and desire the pixelated versions of cards as good enough or, indeed, as more desirable. At that point, the cardboard collectors will either be hopeless dinosaurs or they will be the "hipster" collectors...sort of like folks who just love vinyl records over streaming music today.

Oh, they'll be around. What I'm looking forward to is Heritage that reproduces cards that I collected when they came out. That's only fifteen more years for me. Hope I can put off that heart attack long enough...

No doubt in my mind they'll still be with us. I look at e-reader tech (Nook, Kindle etc.) & realize that many STILL collect old books (myself included) and shop at used bookstores. Hi tech is nice, but can't beat the feel of that cardboard in your hand.

It's funny that you mention video cards. Actually Upper Deck and Panini released video cards earlier this decade. I think the price is what killed that idea.
http://www.ebay.com/itm/2010-11-Totally-Certified-John-Wall-HRX-Video-05-10-Autograph-AUTO-Wizards-10-11-/360934784604?pt=US_Basketball&hash=item540963be5c
The next best thing to those, IMHO, is the Topps Screen Plays. Very cool cards https://www.youtube.com/watch?v=dhaTPn7vfCA

I really hope cards are still being produced in 2024 and if not, we will always have the billions that are out now!