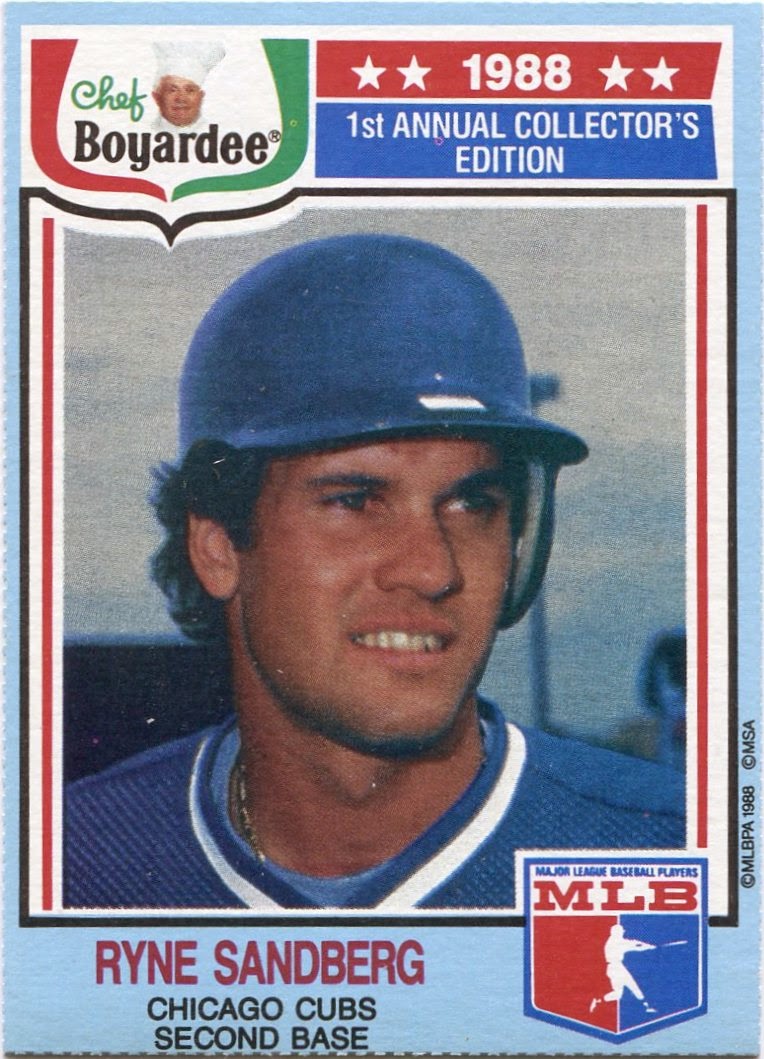 Of course, I probably don't have to tell you that. Whether you're a player collector, set builder, team collector, or whatever else, you already know how great it is to be in this hobby.

I collect because of the fun, first and foremost.

But I'd be lying to myself if I didn't believe there was a little bit of addiction mixed in there somewhere. I have, for better or worse, become addicted to cardboard over the years.

If I go a couple days without physically holding a baseball card, I start to get antsy. You should've seen how I got when I was away from my binders for a whole semester at college a few years ago.

From what I've read, all of us here in the blogosphere share that same addiction. I recently received a couple nice fixes from fellow addict...er, collector Jeff, author of the awesome blog "2x3 Heroes".

I guess it's fitting that I'm showing cards from Jeff, considering he got me started with another addiction. After all, the idea to dig for all those virtual bargains I've been showing the past couple days came from him.

Don't tell anybody, but I think Jeff has an addiction to PWEs. He's the supreme "PWE King" around here. Jeff slipped in this terrific Chef Boyardee oddball into his most recent batch.

You know, in case I get the munchies. 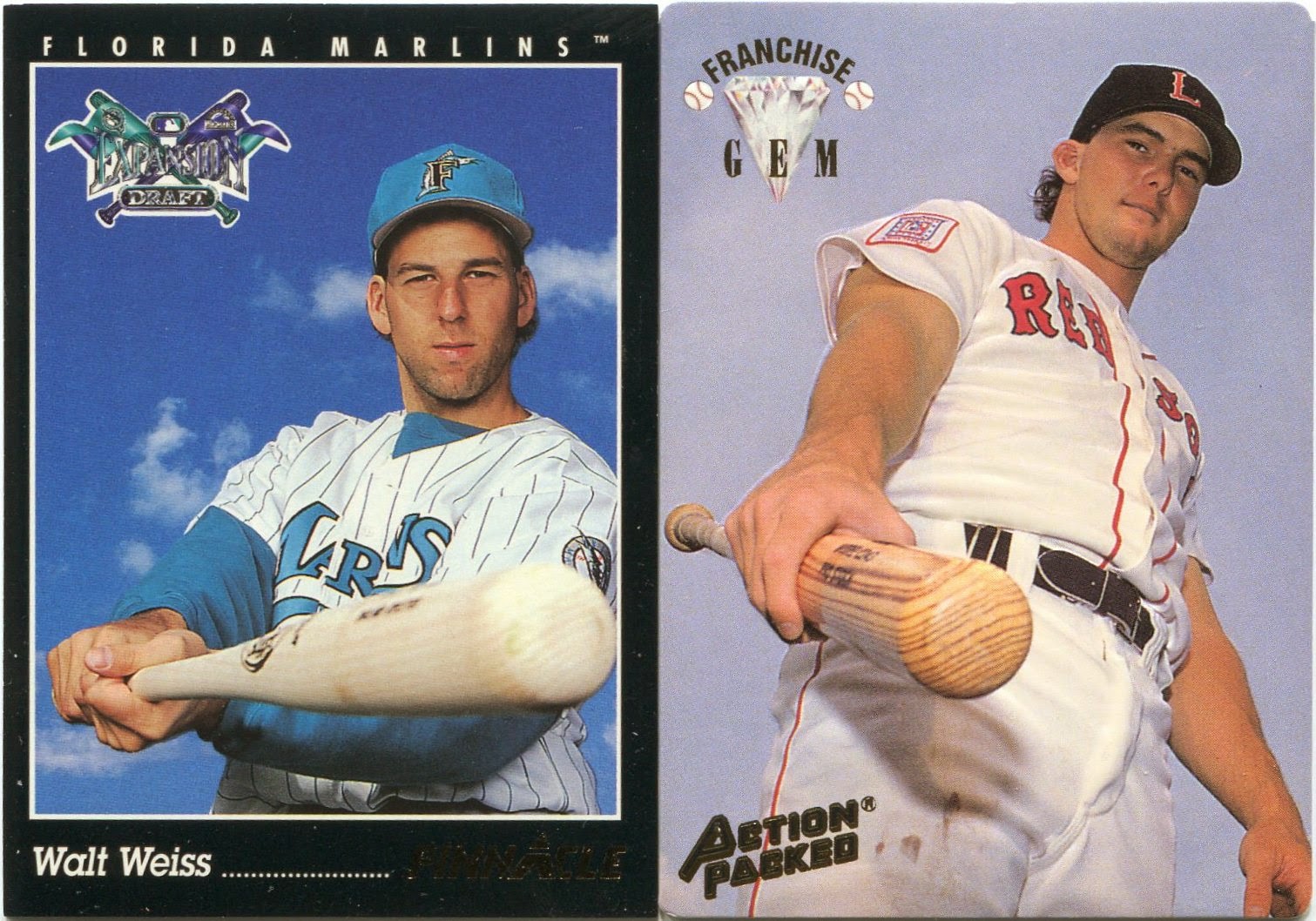 I accepted it a long time ago.

This double "bat barrel" combo nearly made me froth at the mouth. 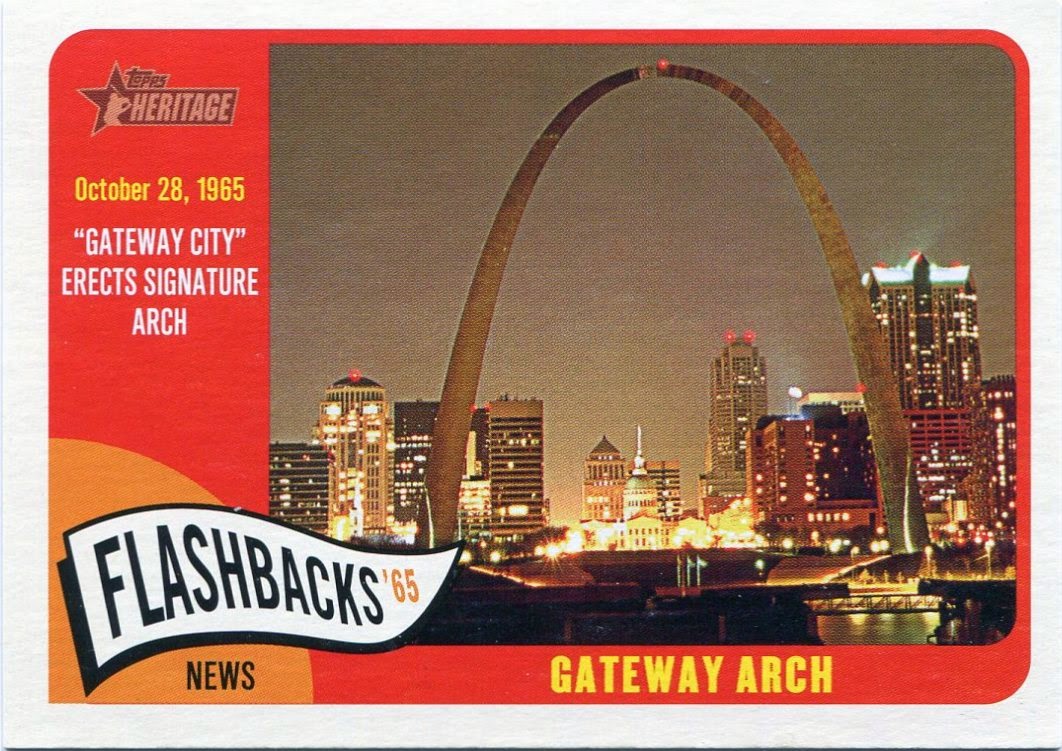 You could say that Jeff is one of my main cardboard suppliers.

A short while before the "PWE King" struck with the Boyardee/bat barrel envelope, he strayed away from his comfort zone by hitting me with an entire package of the good stuff.

Not long ago, I was climbing the walls. I somehow missed out on picking up one of the "News Flashbacks" inserts during my recent Heritage extravaganza. The fact that I had nine out of ten was driving me nuts.

Thankfully, Jeff was there to save the day. He sent over this beautiful Gateway Arch insert, the last one I needed to complete my set.

I can rest a little easier now. 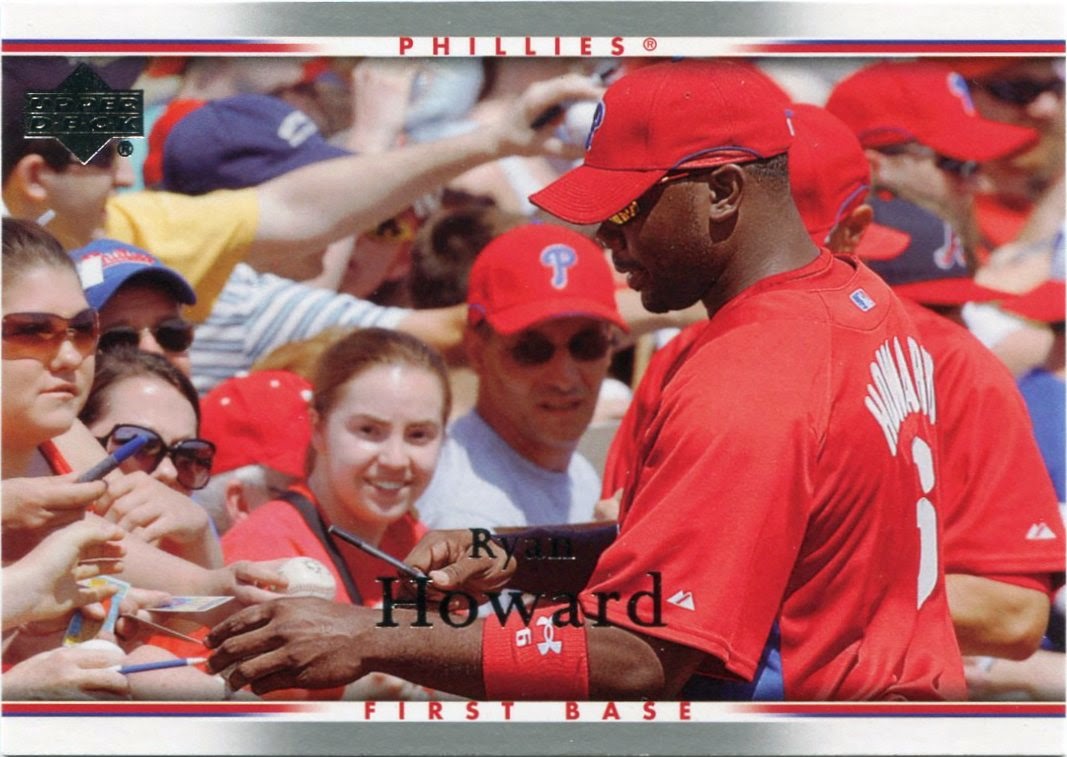 But he didn't stop there.

He further supplemented my mini-collection addiction with this neat "autograph" shot of Mr. Ryan Howard.

Slowly but surely, I'm starting to come around on 2007 Upper Deck. 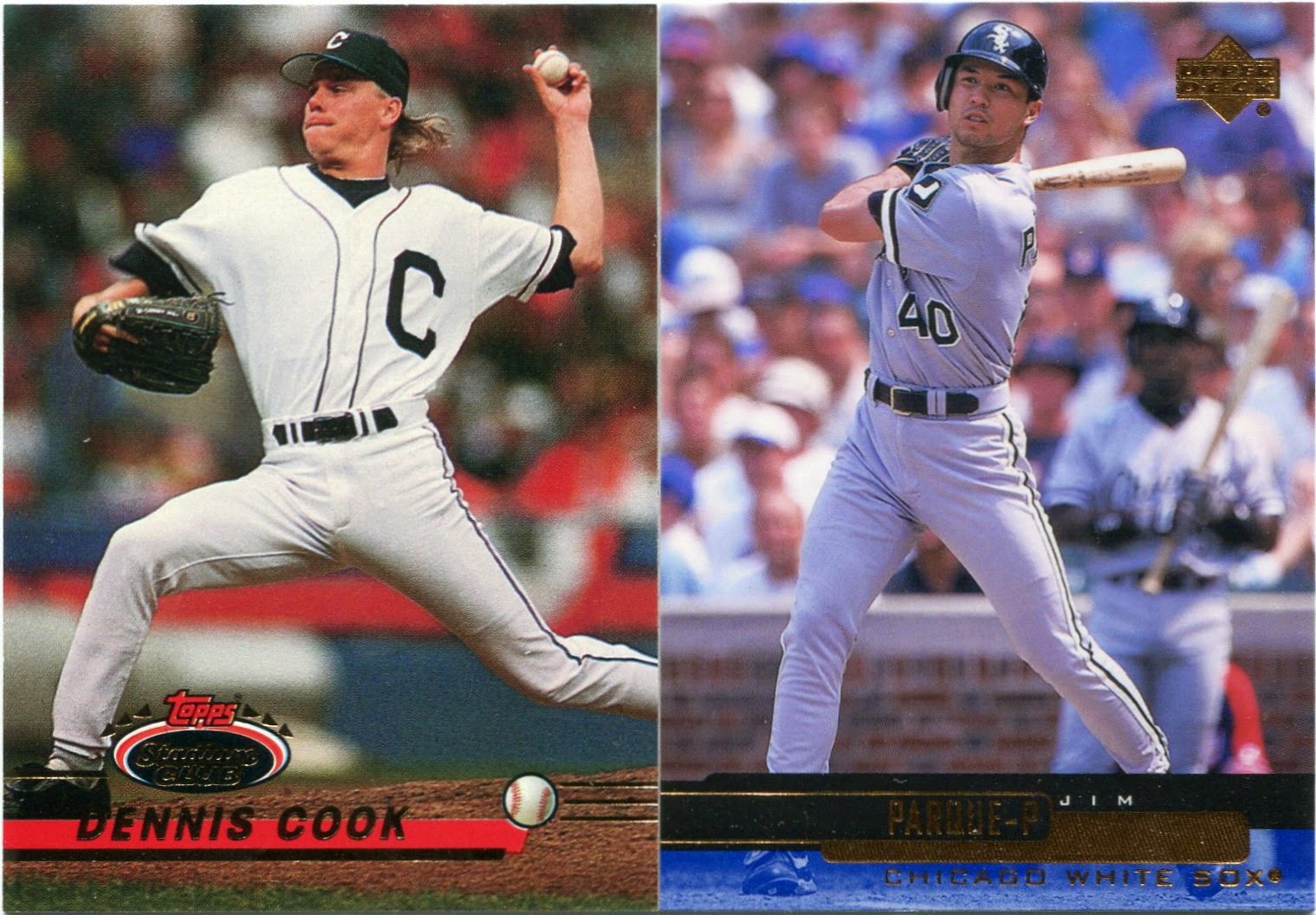 If you're a "throwback" and/or "pitcher at the plate" addict like me, then you'll enjoy these.

That Jim Parque is an ever-rare American League "pitcher at the plate", complete with the beautiful brick backdrop of Wrigley Field. 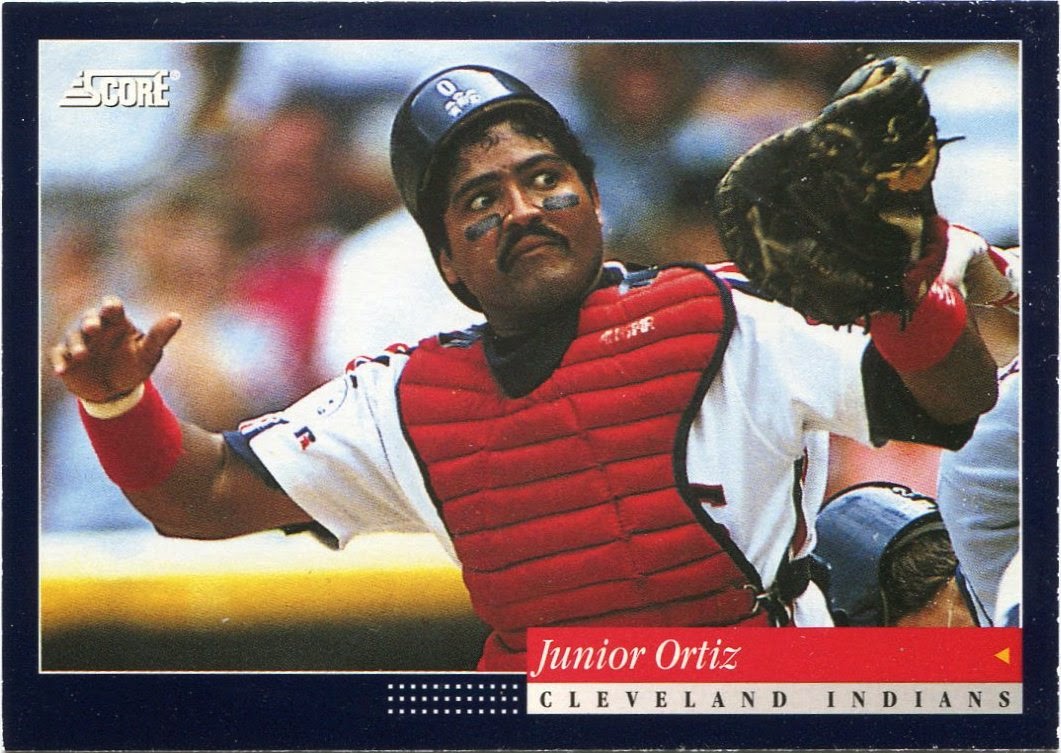 This is how I look when I'm forced to go without my baseball cards for a day or two.

Bug-eyed, frightened, and with perhaps a hint of anger. I'm telling you, cardboard withdrawal is a real thing. 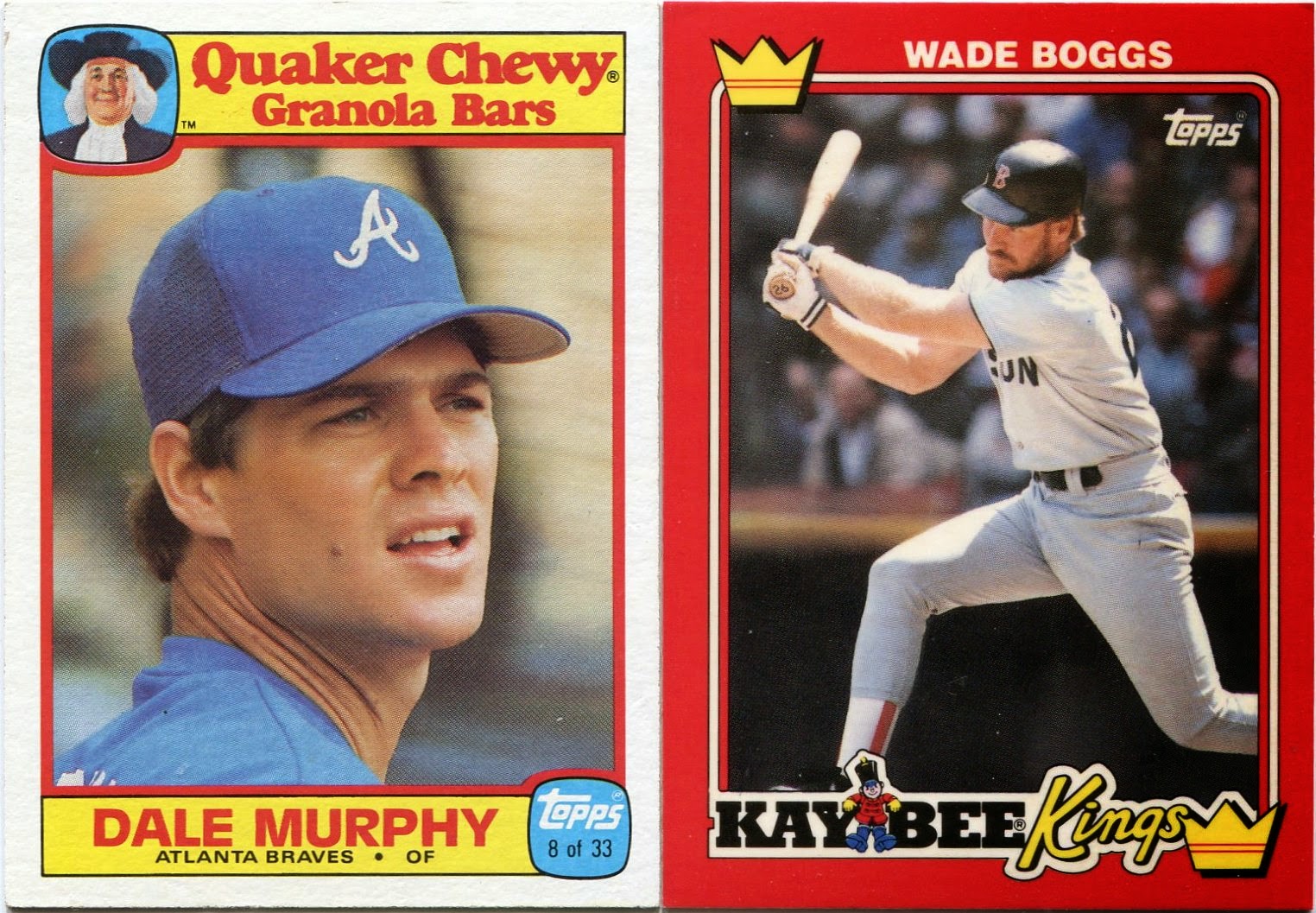 Once again, Jeff helped supplement my new addiction to oddballs.

I don't care whether it's Quaker or Kaybee. I want them. All of them.

Jeez. Sorry about that.

I can get a little out of control sometimes. 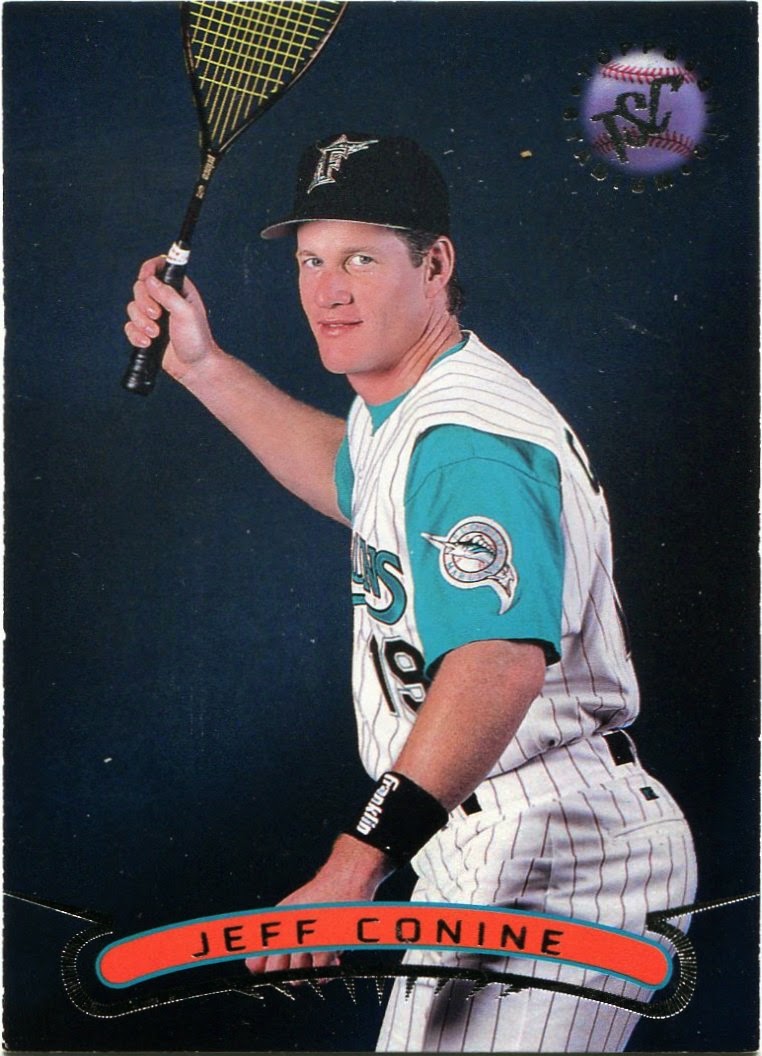 Above all, though, this hobby is fun.

I can't tell you how much enjoyment I get out of finding a great new card for my binders. All of you out there have done a great job of keeping an eye out for perfect dime box-type cardboard.

Cards like this Jeff Conine are exactly what I mean. I have shots of guys playing basketball, football, and even hockey in my collection.

But I can honestly say that this is the very first racquetball card I own. I'd venture a guess that it's the only one in existence.

Apparently, Conine was quite a racquetball player in his day. Knowing that, I guess it's somewhat more reasonable for Stadium Club to use a shot like this, though it doesn't make it any less strange.

Cards like these are what keep the hobby fun for me.

There's little denying that I've developed an addiction to collecting during the time I've been in this hobby, though. It comes with the territory.

Thankfully, there isn't a rehab clinic for cardboard addicts.

Nick, if there was a cardboard rehab (probably would be the LCS, while they still exist), which does makes sense, afterall most "addicts" aren't helped as much as one might think by going to rehab.

this comment is NOT intended to offend anyone in any way, just a fun spin on our cardboard addiction.