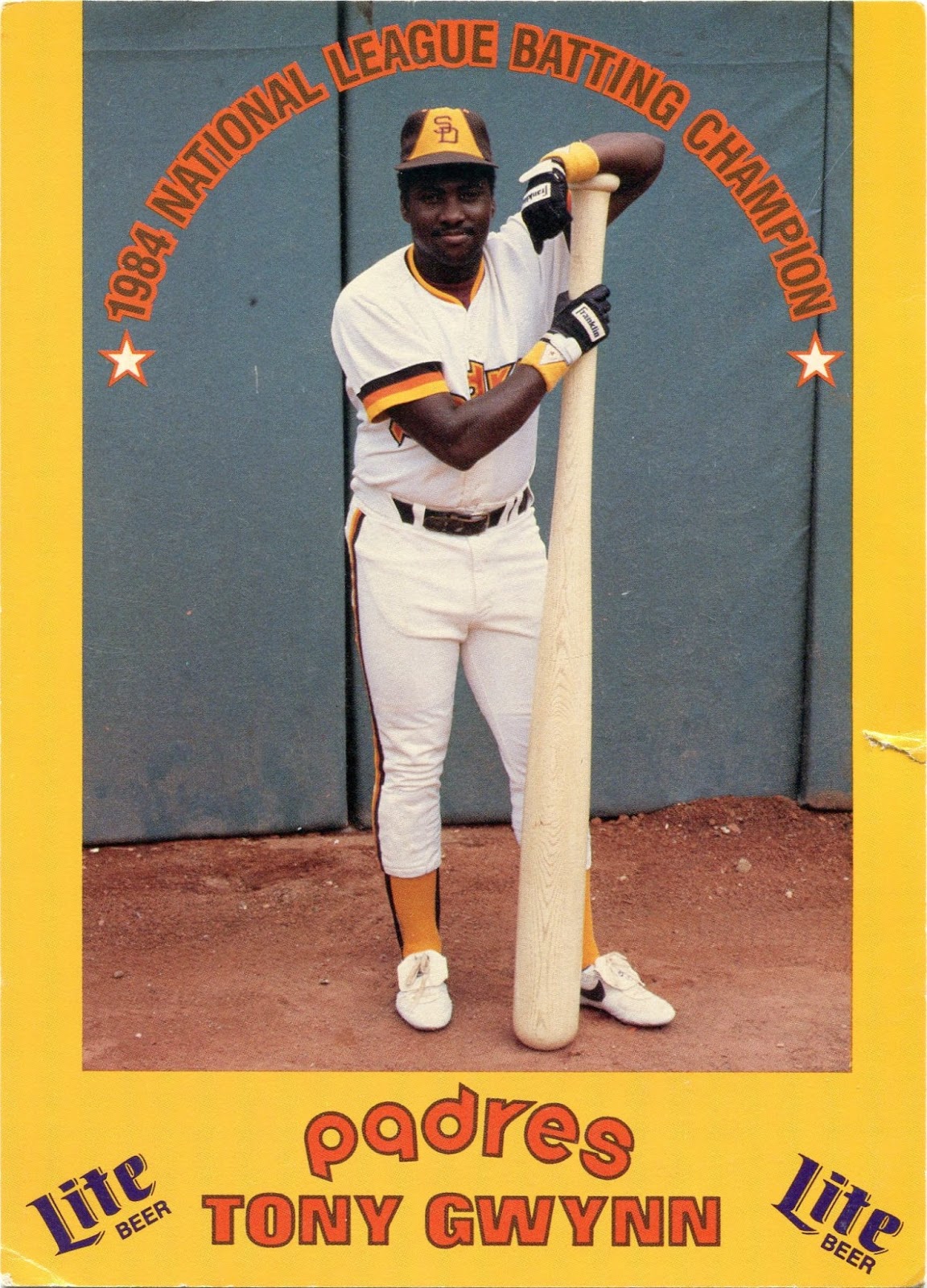 Today is a sad day in the baseball world.

In case you haven't heard, Tony Gwynn passed away today at the age of 54.

As perhaps the greatest pure hitter in recent history, he was a career .338 hitter and a 16-time All-Star.

One of the more fascinating things I learned about "Mr. Padre" today was the fact that he never struck out more than 40 times in a season. That's almost incomprehensible with the way the game is played today.

Not surprisingly, Gwynn was a first-ballot Hall of Fame inductee in 2007. He was, by all accounts, a great baseball player and an even greater human being. Much like Don Zimmer's passing last week, the baseball world lost a terrific man today.

As far as my collection goes, Tony Gwynn had been fresh on my mind. I found this spectacular oversized oddball tucked inside a box in my closet while digging for my wrapper post early last week.

My grandma lived in San Diego during the 1980's and was a huge fan of the Padre teams from that era. She probably gave this to me at some point, though I'm not sure what it was doing buried inside my closet. Such an awesome oddball of an even more awesome player deserved better.

Tonight, I'll do my best to honor Tony Gwynn the only way I know how. By making a list, of course.

Here are my ten favorite cards of the late Mr. Gwynn. 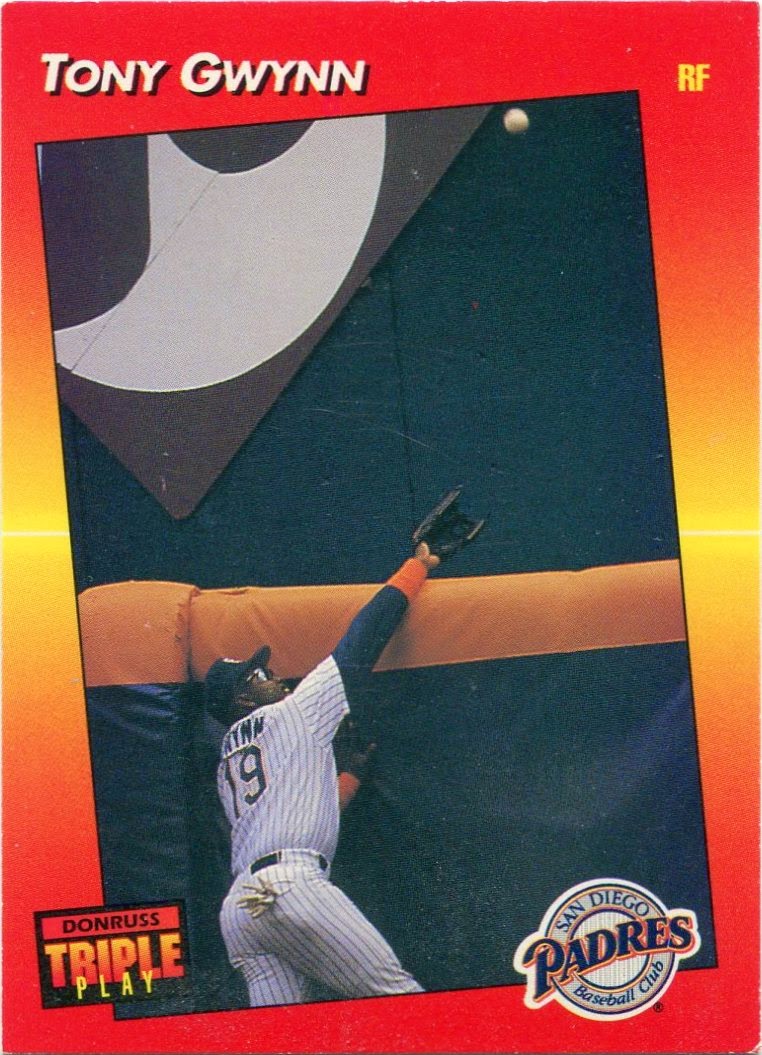 I was a bit of a late bloomer as far as Tony Gwynn cards are concerned.

For whatever reason, I didn't start paying attention to his cardboard until fairly recently. I probably missed out on a lot of good ones as a result.

I've done my best to make up for lost time. Largely thanks to the world of dime boxes, my Gwynn collection currently stands at 96 cards. I know for sure that the initial one on tonight's list was one of the first I ever found.

The vast majority of my Gwynn cards feature the legendary hitter at the plate, and rightfully so. Donruss Triple Play was a brand that was known to think a little outside the box, however, which explains the terrific "at the wall" shot they ended up using in 1992.

Of the 96 Gwynns I own, this is one of just nine that features him patrolling the outfield. 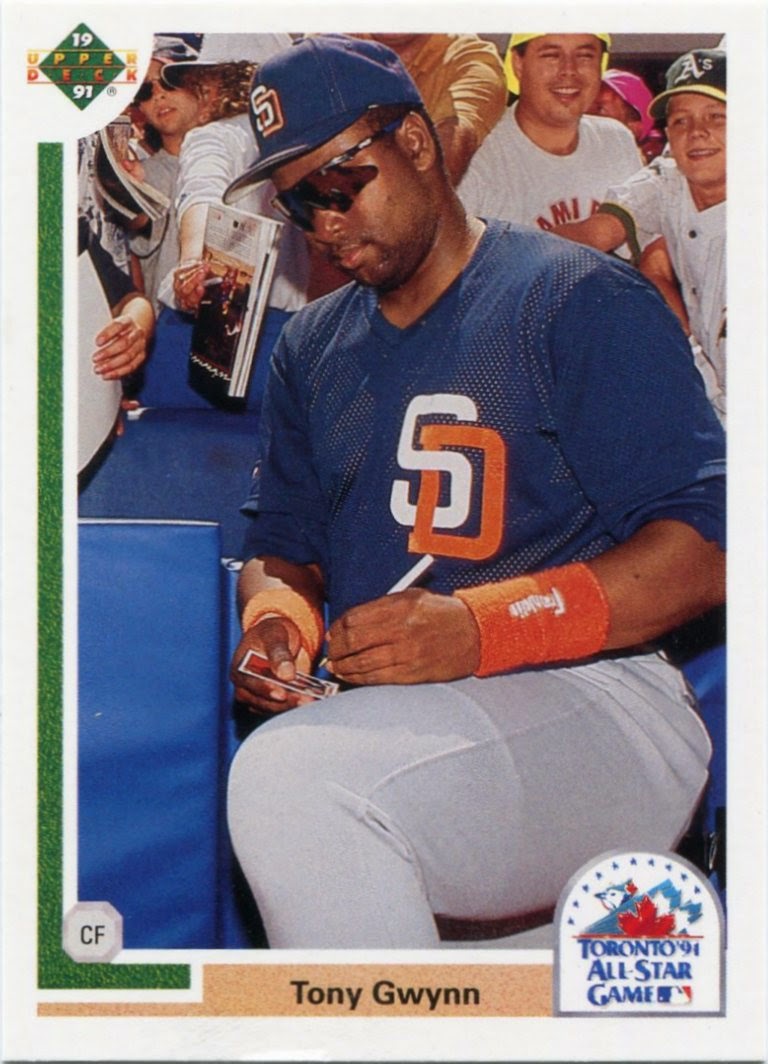 This terrific "autograph" shot is a fairly recent dime box find of mine.

I own a few different cards of Gwynn signing for fans, but this easily my favorite one. Just look at how happy those fans are in the background.

I guess I'd smile too if I ever had the opportunity to meet Tony Gwynn. 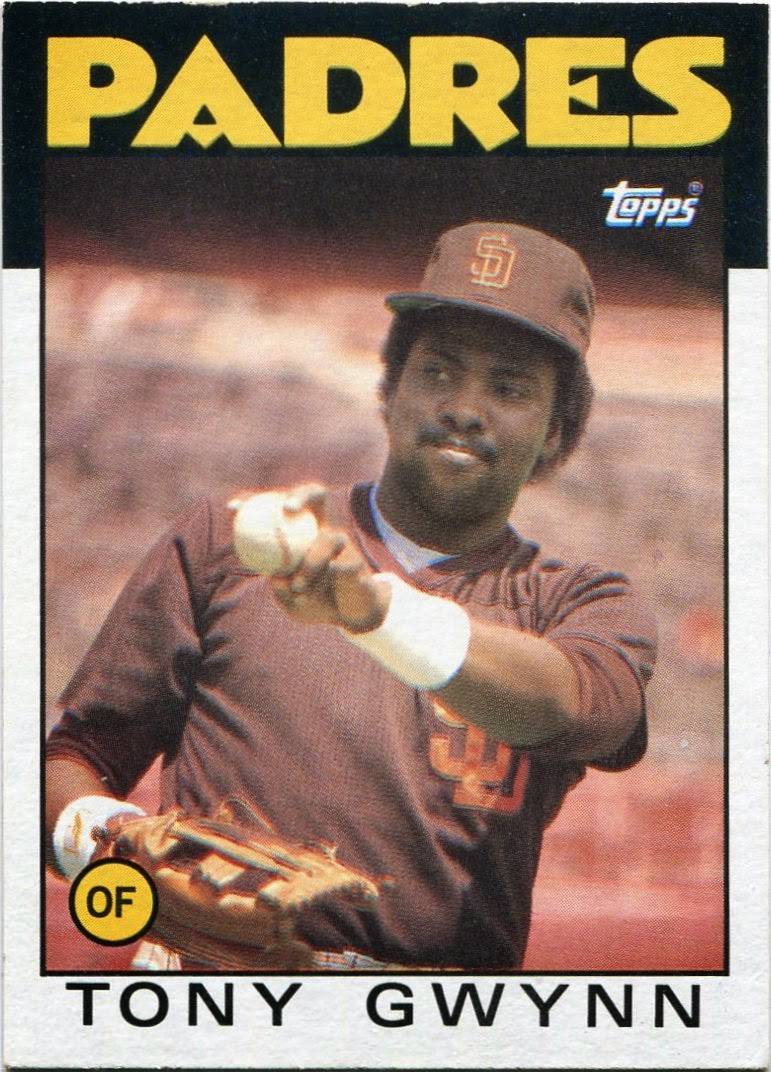 This may well have been the first Tony Gwynn card I ever owned.

I don't think I ever realized how cool it was until I saw other bloggers mention it on their blogs.

For one thing, it comes from the hallowed 1986 Topps checklist. After years of apathy, '86 Topps is starting to creep up on my list of the all-time Topps designs.

More than that, though, this is a fantastic candid shot of Gwynn showing off his forkball to what I assume is a teammate off-camera.

It may well be the best card from the '86 Topps checklist. 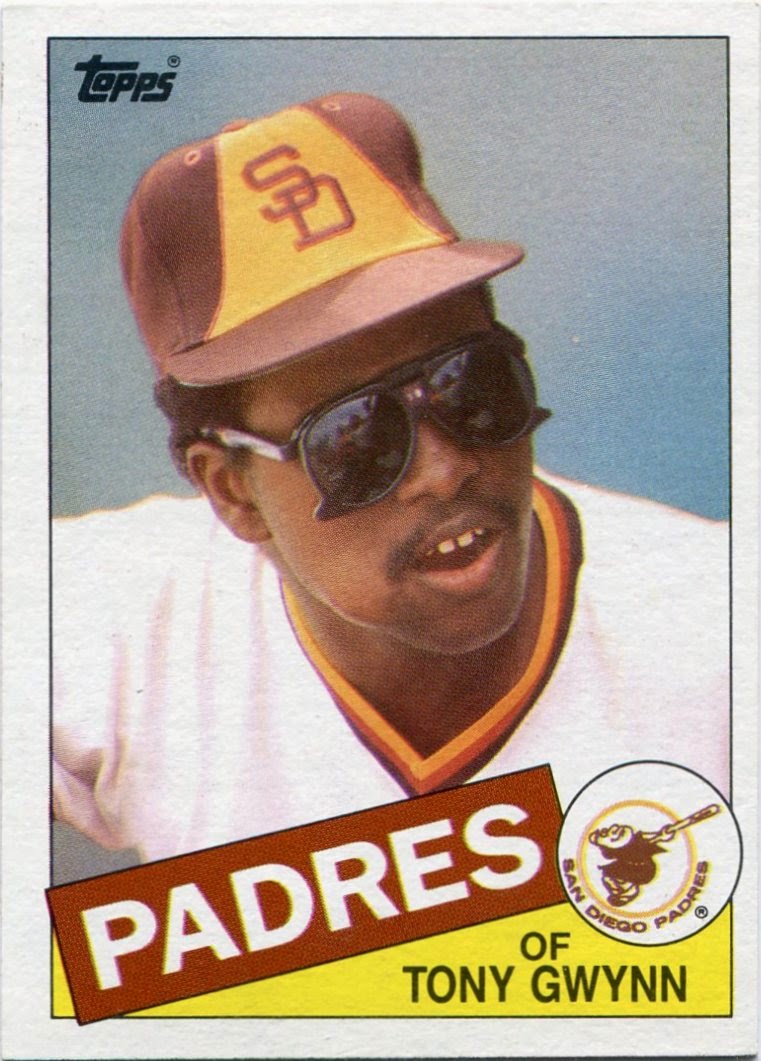 For my money, I think this one slightly edges out his '86 Topps issue.

I kept switching the order of the two while preparing for this post. I'm still not sure if I made the right choice or not.

For now, this one gets the nod as my favorite Flagship card of his. (I'm still searching for a copy of his iconic '83 Topps rookie.)

It came off the heels of Gwynn's .351 season in 1984, the first of eight batting titles he'd win in his career. Unfortunately, it also appears to feature him with a wad of tobacco in his mouth, the habit that most likely led to his untimely passing.

Of course, what really makes the card are those slick shades "Mr. Padre" is sporting.

Such a flashy shot actually seems a bit out of place in the fairly bland '85 Topps set. 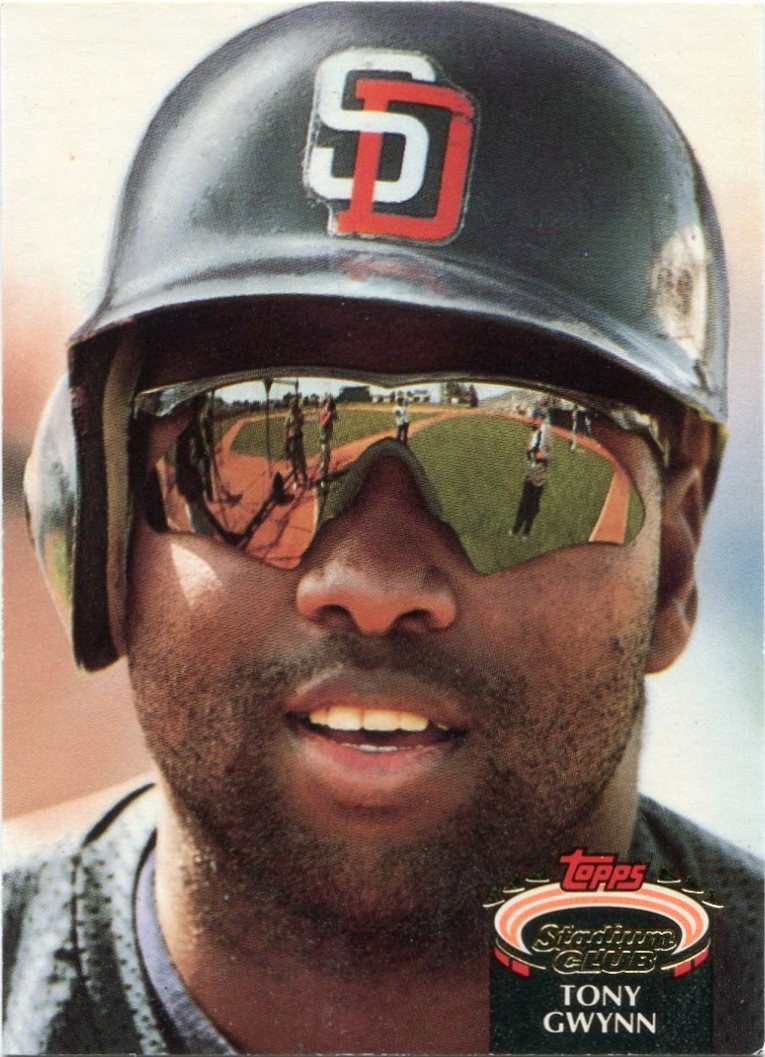 I guess the guy just had a knack for sweet shades.

What gives this one the nod over his similar '85 Topps issue is the fact that you can see the Topps photographer (and the rest of the baseball field, for that matter) reflected in Gwynn's lenses.

This is cardboard art in every sense. 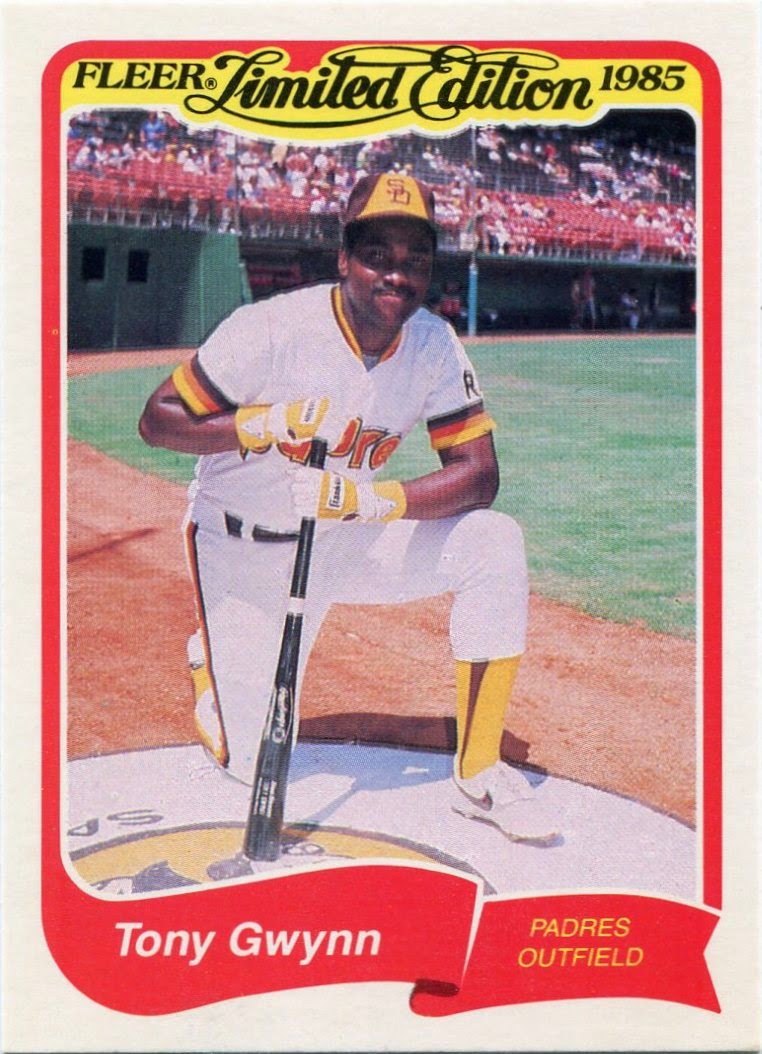 I actually just picked this one up at the flea market a few weeks ago.

It was love at first sight.

These '80s Fleer Limited Edition singles are always a treat to find in dime boxes. They're very well-designed, often better than the standard Fleer cards from the same year.

This is probably the absolute best Limited Edition card I've found. It's a wonderful on-deck shot of Gwynn supplemented by the backstop at old Jack Murphy Stadium.

Most of the time, the whole "Limited Edition" thing is just a sham to get people to think they're fancy. In this case, though, it worked.

Owning this card really does make me feel fancy. 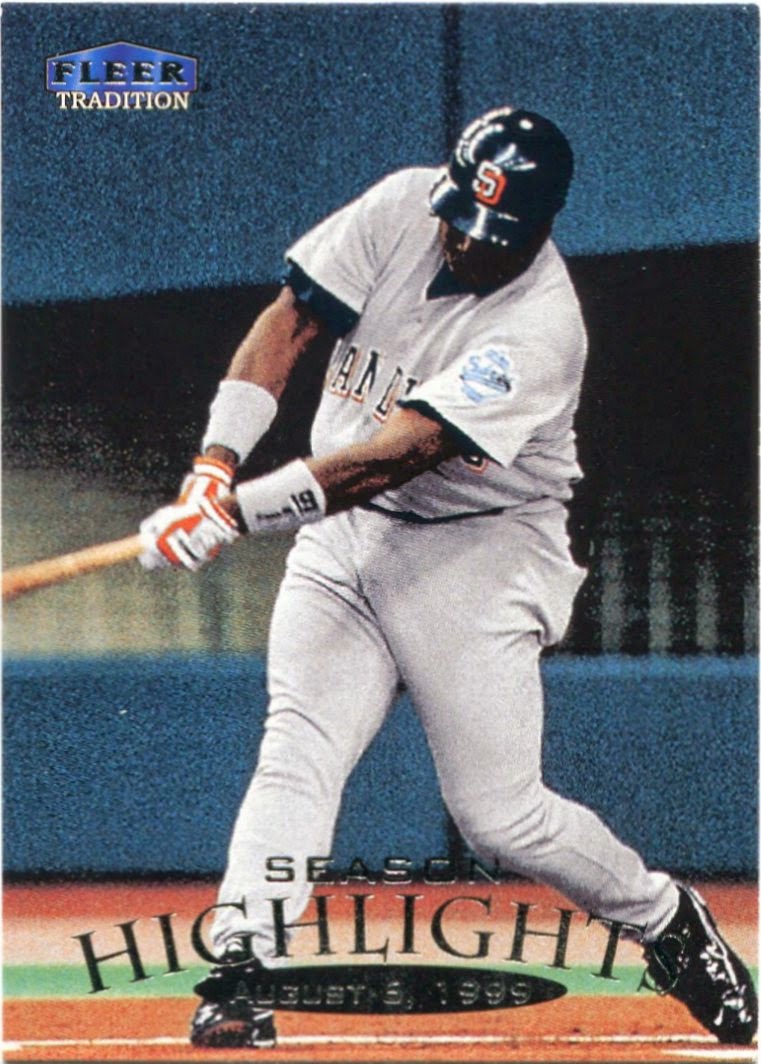 I've always been a sucker for highlights cards like this.

After a long and decorated career, Gwynn reached the 3,000-hit plateau in Montreal on August 6th, 1999. Coincidentally, Wade Boggs would collect his 3,000th hit the very next day in Tampa.

Gwynn finished his career with a whopping 3,141 total knocks, good for 19th on the all-time list.

I'll also say that he had one of the sweetest swings I've ever seen on a baseball field.

Few, if any, could match it. 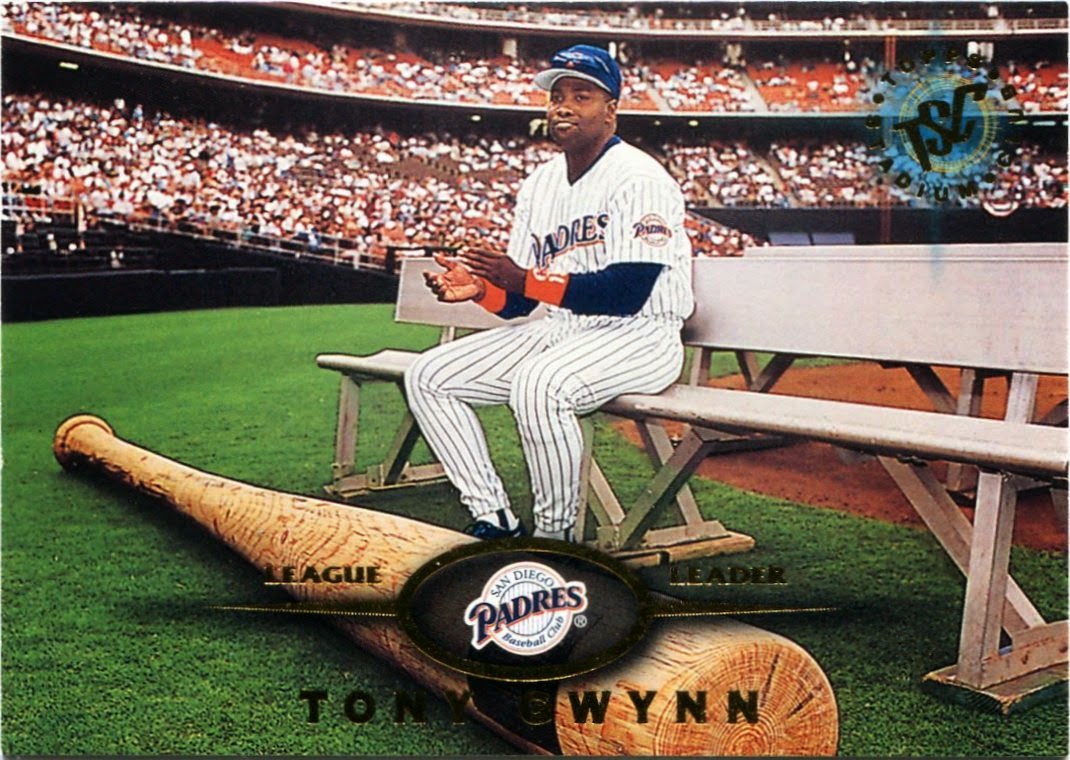 That is by far the biggest bat I've ever seen on a baseball card.

Much like the Fleer Limited Edition single you saw earlier, this terrific Stadium Club shot also features the wonderful Jack Murphy Stadium in the background.

I can't imagine what kind of ceremony would warrant such a wildly oversized bat.

I guess Gwynn was just larger than life in a lot of ways. 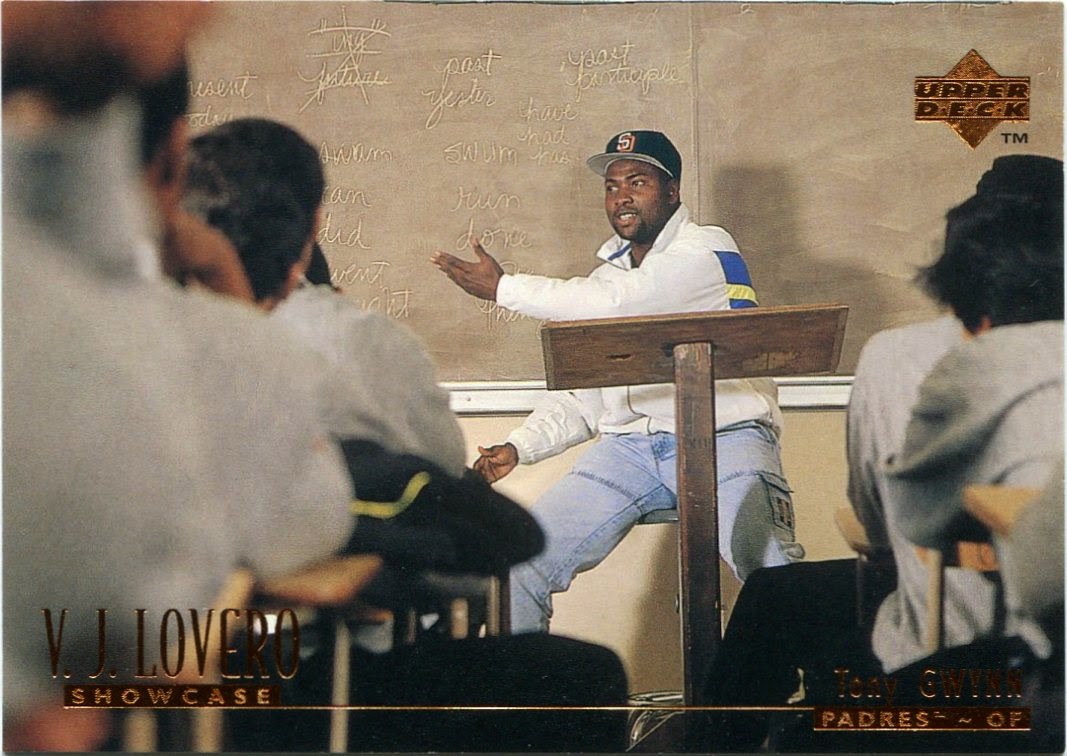 I'm all for quirky cardboard. If the prior Stadium Club shot was any indication, Mr. Gwynn had quite a few strange pieces issued during his career.

Everything from this 1995 UD V.J. Lovero insert series is pure gold. If you need a new set to chase, I can't help but think that building this one would make for a fun little project.

I can honestly say that this is the only card I've ever seen of a ballplayer in a classroom. The back notes that Gwynn was a community leader. He's featured here chatting with a high school class in San Diego.

It further shows what a great human being the guy was. 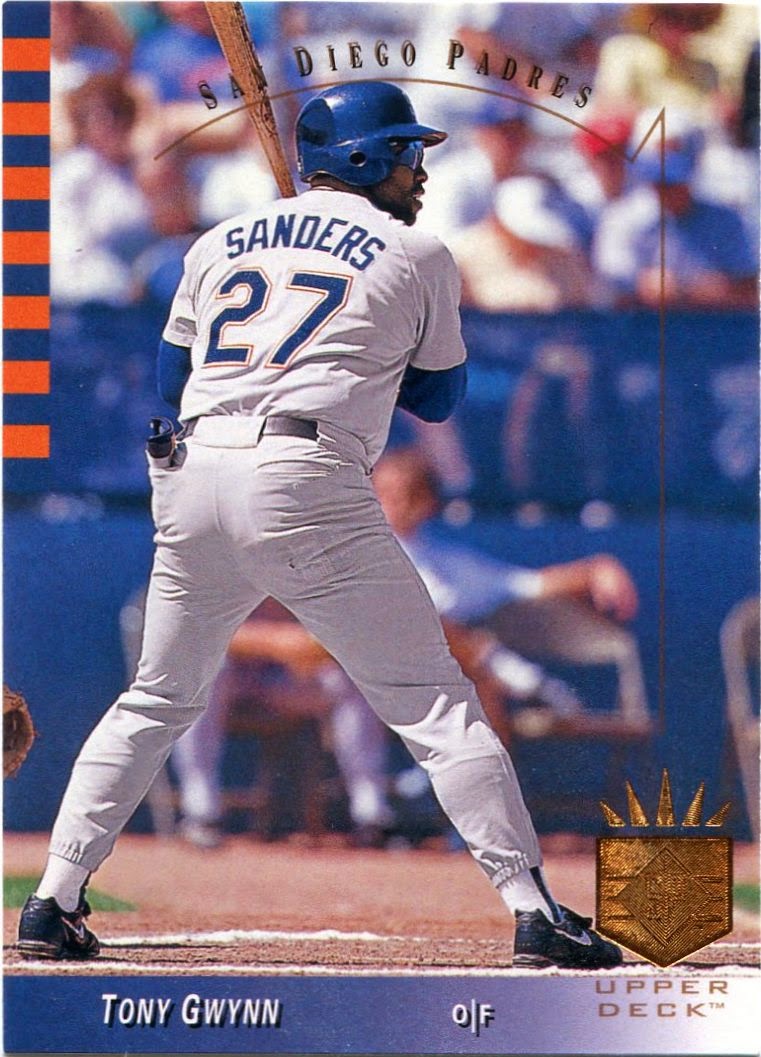 This one may well be the king of quirky cardboard.

If you've been collecting for any period of time, I'm sure you've heard of this card at some point. It's one of the more puzzling pieces ever made.

From what I've read, Gwynn actually forgot his famous #19 jersey at the team's hotel before a spring training game. He was forced to wear the gear of Padre teammate Scott Sanders for the contest as a result.

Now, why the people in charge of SP would actually put such an image on a baseball card is anyone's guess. Either way, I'm glad they did.

You're not going to find many more interesting cards in this hobby.

I'll be the first to admit that my Tony Gwynn collection is nowhere near complete. I'm sure there are a ton of other great cards of his floating around out there, just waiting to be discovered.

Now that he's gone, each new one I find will hold even more meaning to me. Still, it's hard to accept the loss of such a great member of the baseball family.

Especially one that touched as many lives as Tony Gwynn did.

I've still got a nice sum of money from the ongoing COMC challenges in my account. That Snaders/Gwynn just entered my inventory almost immediately after seeing it posted here.

Great countdown! Still need to track down 2/10ths of the list, #2 & #4. That Lovero is awesome. My list will be up soon, still trying to process everything. Thanks for the post, really appreciate it.

Good post. I wrote a little tribute about Gwynn as well: http://tomahawkempire.blogspot.com/2014/06/a-tribute-to-tony-gwynn.html

I was too young to see him play, but I did go to Cooperstown the same year he was inducted. There were many Padres jerseys (and Orioles jerseys) walking around town, rightfully so.

I used to have some Gwynn cards. The one I remember most would be from 1988 Score, I believe. I think it had a green border.

Great post. It's hard to go wrong with a post containing a bunch of Gwynn cards. I considered doing the same thing, but when it came down to choosing cards... I just didn't have it in me. Maybe I'll try again in a few days. Rest in peace, Mr. Gwynn.