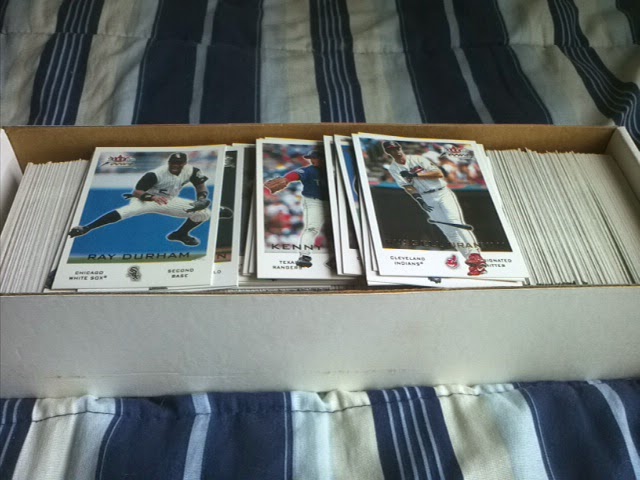 I hope some of my posts around here have inspired others to take a closer look at the flea market business.

Still, I realize that the treasure trove of cardboard I seem to have at my local flea market isn't typical. Not all flea markets have regular dime box vendors and great selections like the one around here.

A lot of it is pure luck.

Sadly, my usual local flea market has been closed the last couple weeks for various reasons. Luckily, though, the annual neighborhood-wide flea market (located just a few blocks from where I live) was in business yesterday.

It's only a few aisles deep, basically just one big garage sale. Mostly just people trying to unload their junk onto others. Still, I've found cards there the past couple years. Last year featured a few nice little grab bags of '90s goodness, while the year before that produced one of my more invigorating dime box digs.

I got lucky again this time around. There were more cards ripe for the picking yesterday. What you see above was actually my final purchase of the afternoon.

Seconds after I started looking through it, the guy told me I could have the entire box for three bucks.

I handed over three crisp Washingtons without much of a second thought. 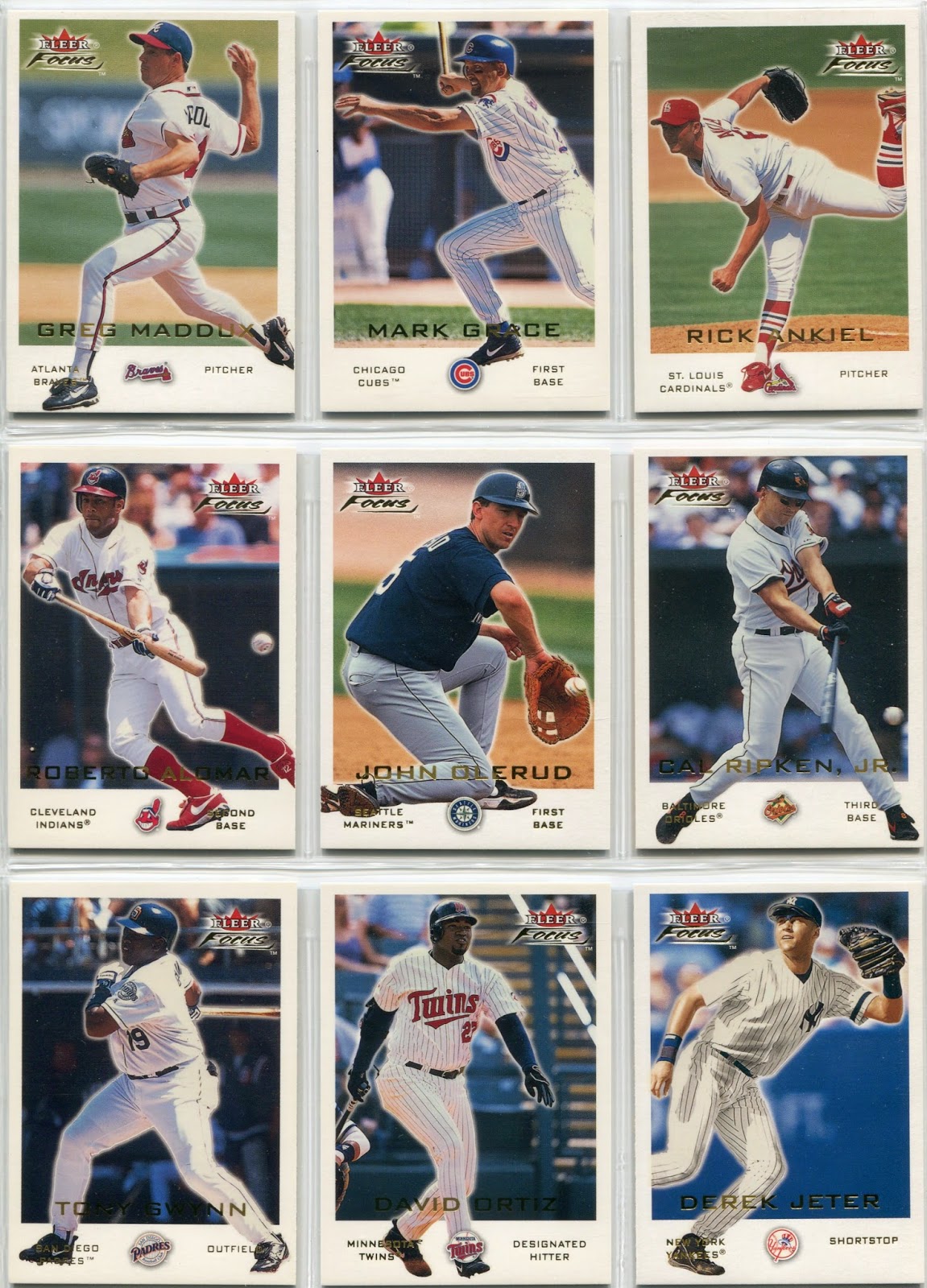 About 99 percent of the cards I found inside were from 2001 Fleer Focus.

There were so many, in fact, that I probably had enough to complete the set twice over.

Granted, it's not the most glamourous design ever, but I couldn't pass up something like that for just three bucks.

The checklist has plenty of star power and provided quite a few new hits to my many player collections. 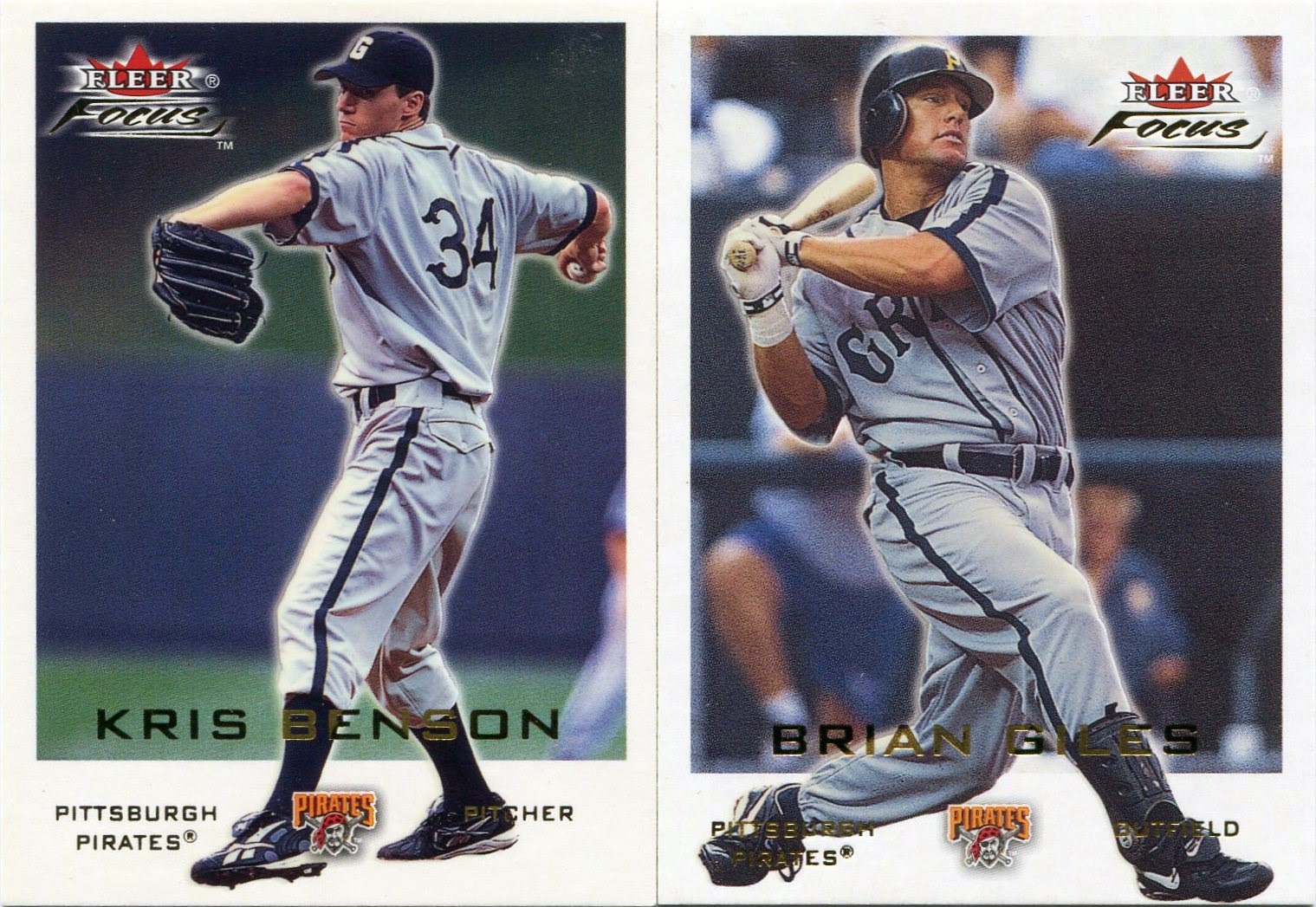 As I found, however, the biggest draw to this set is the ample amount of retro jerseys it features.

I dug up nearly a dozen different ones, including these two awesome Pittsburgh Grays throwbacks. 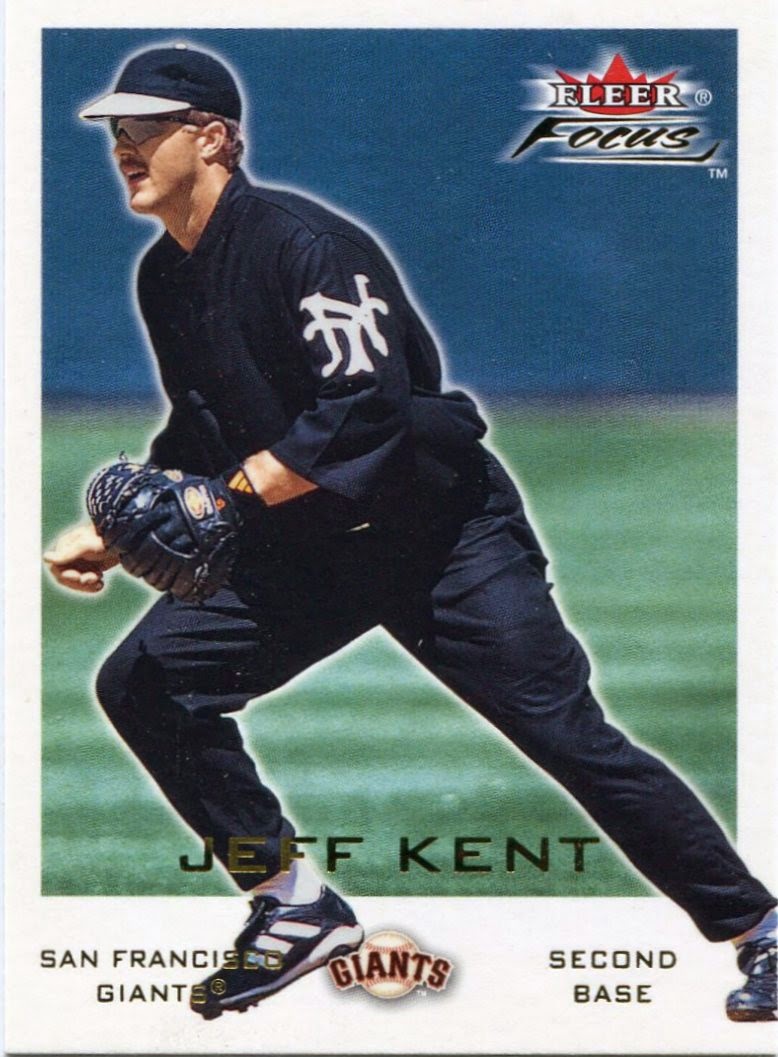 I never thought I'd say this, but Jeff Kent actually made for the best card in the box.

He's seen sporting a terrific turn-of-the-century New York Giants throwback in this shot. It's one of the best retro specimens I've ever seen on cardboard.

To me, just digging through a whole box of cards would've been well worth the three bucks.

The throwbacks were just a bonus. 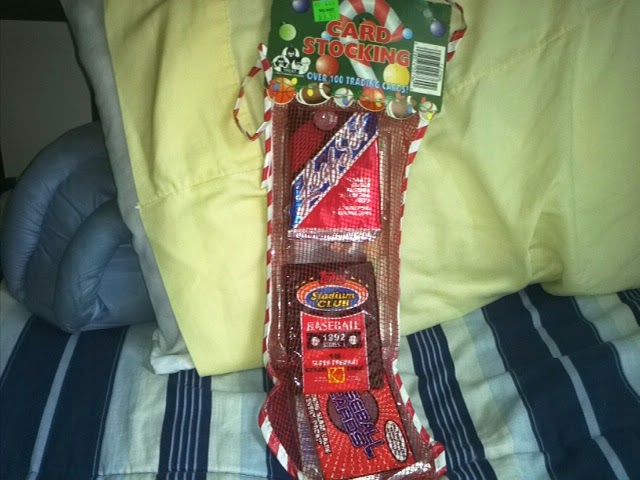 I found a box full of unpriced miscellany about halfway through the flea market.

Most of it featured card-related pieces, though there were a few housewares and other random knick-knacks thrown in for good measure.

One particular item that grabbed my eye was this intriguing "Card Stocking" you see above.

It felt like Christmas in June when the vendor said I could have it for a buck. 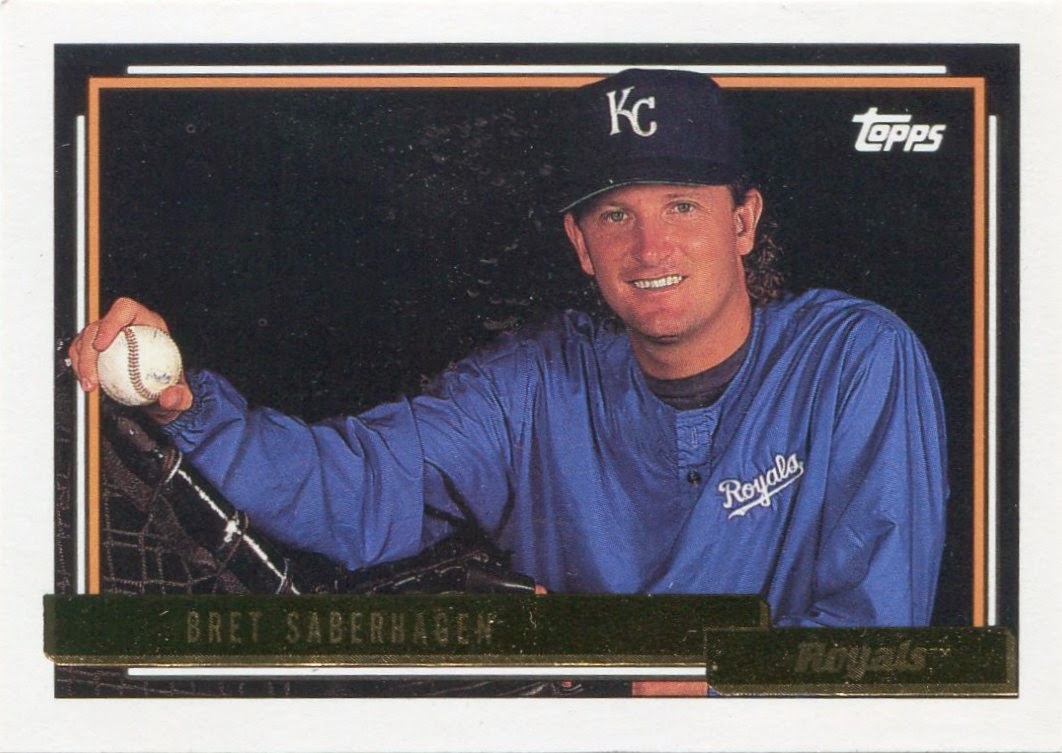 As you can probably tell from the picture, the stocking was filled with a few random packs of cards.

The one all the way at the bottom was like an odd makeshift repack. It featured singles from a number of early '90s brands and even advertised the fact that each pack contained a Topps Gold card.

It lived up to its promise. 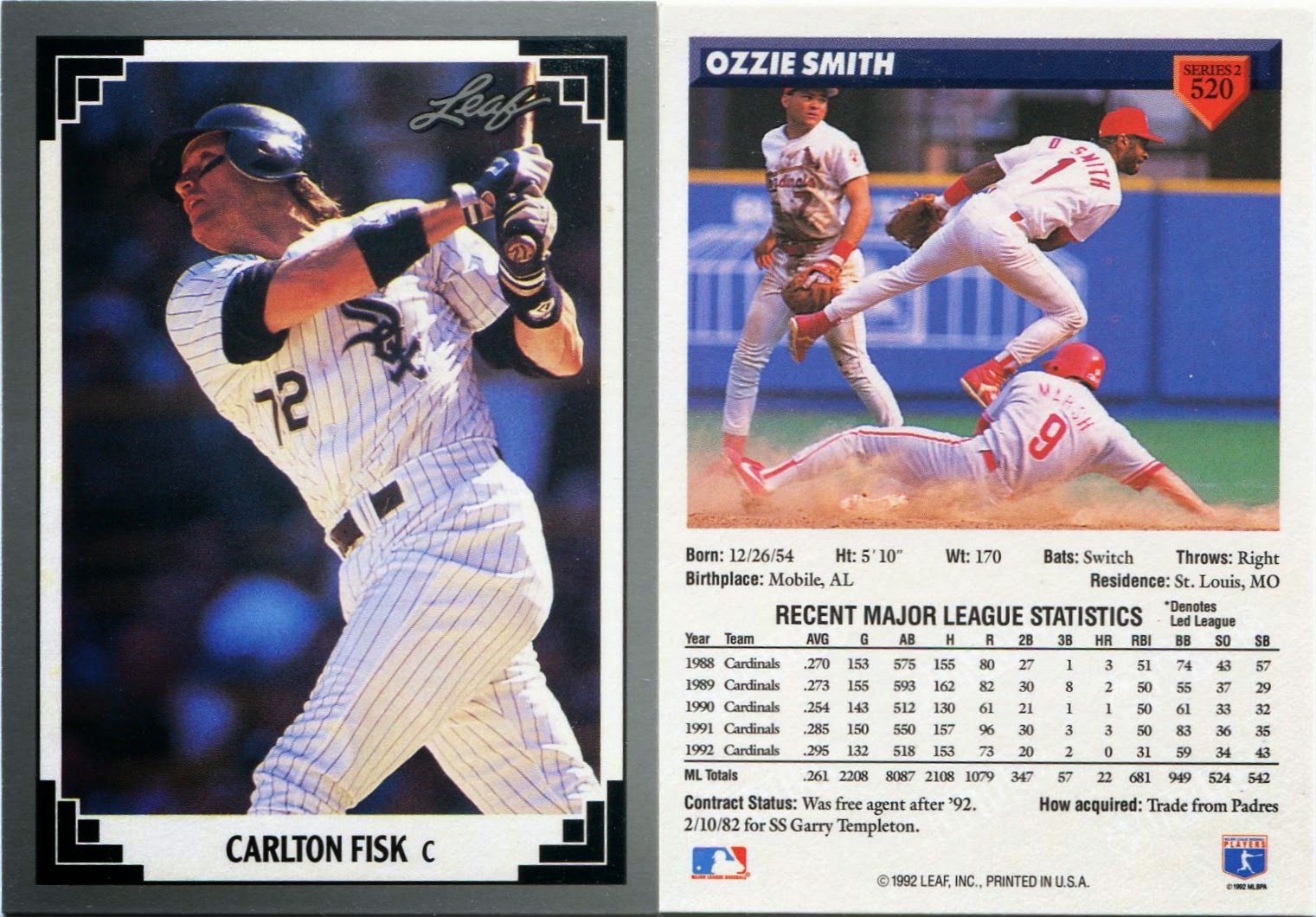 I'm fairly apathetic towards both brands, but that's not to say they don't feature brief glimmers of greatness every now and then.

I just wished Donruss used that awesome double play shot of "The Wizard" on the front of the card. 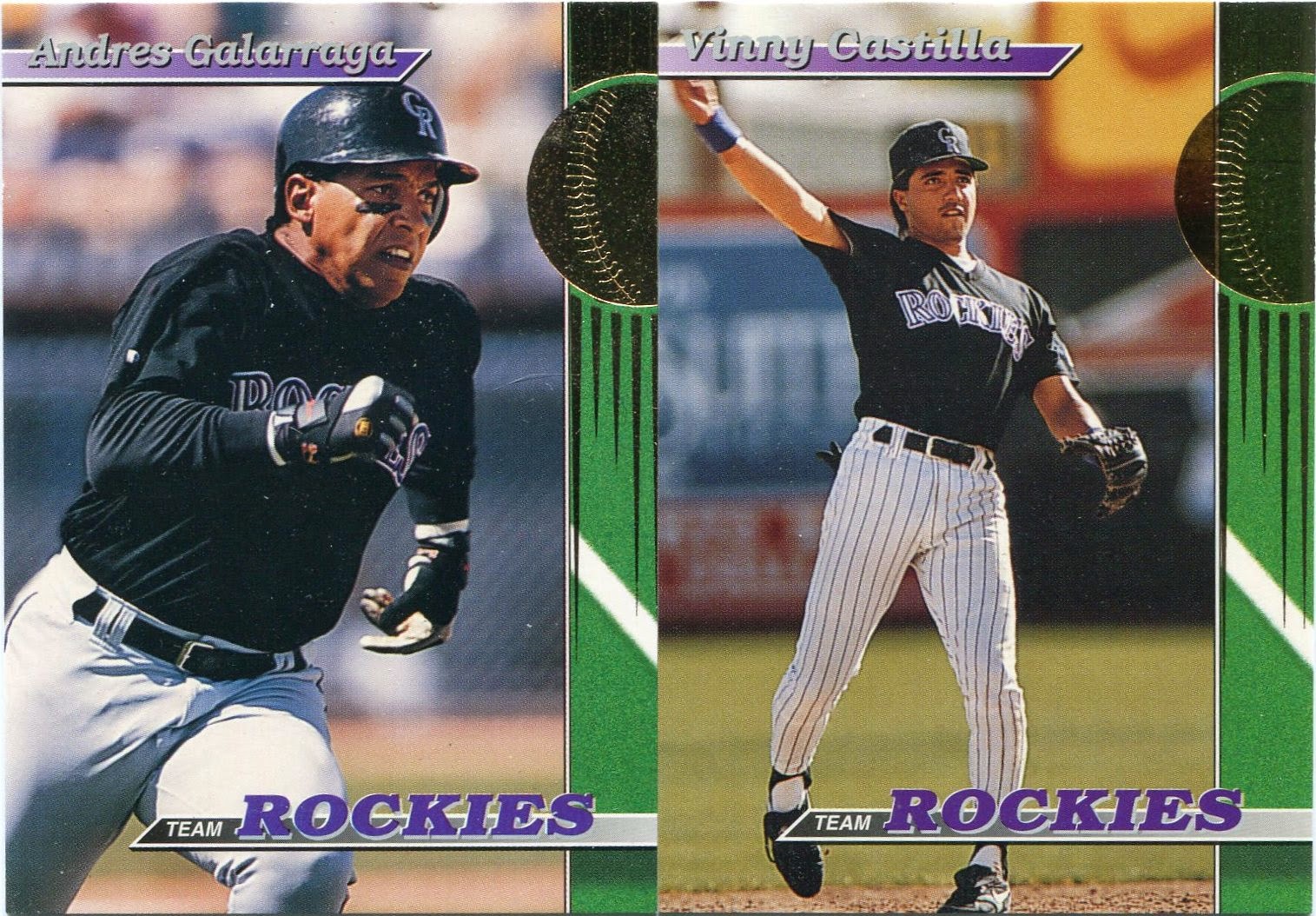 This card stocking was the gift that kept on giving.

Tucked away behind the packs of Leaf and Donruss was the entire 27-card 1993 Stadium Club Rockies team set. I can't say I'd heard of all twenty-seven guys, and I couldn't help but notice that Topps gave a snub to Dale Murphy. 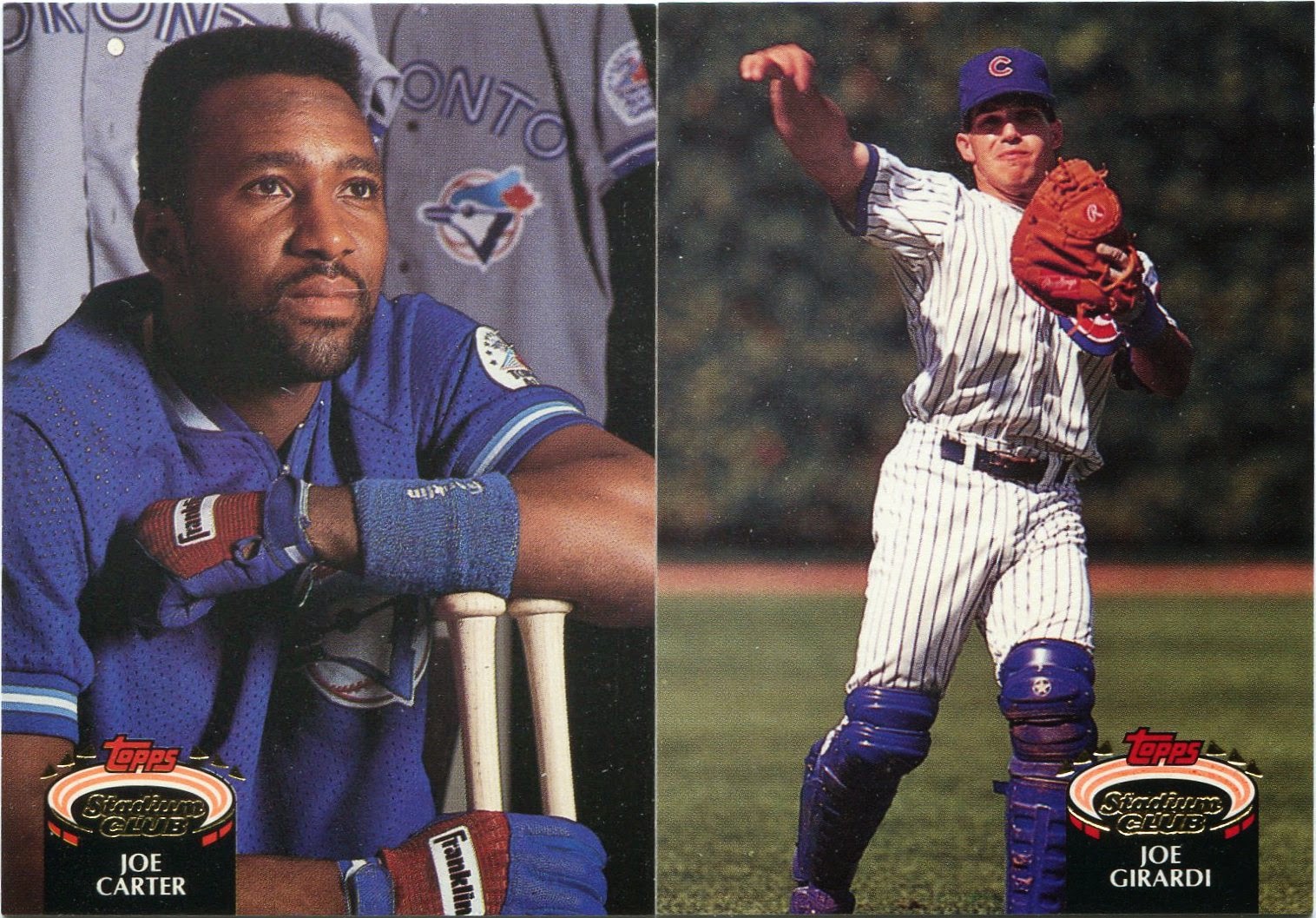 As you might have noticed from the photo of this card stocking, a pack of 1992 Stadium Club was probably the crown jewel.

I still think this is one of the more beautiful sets ever made. 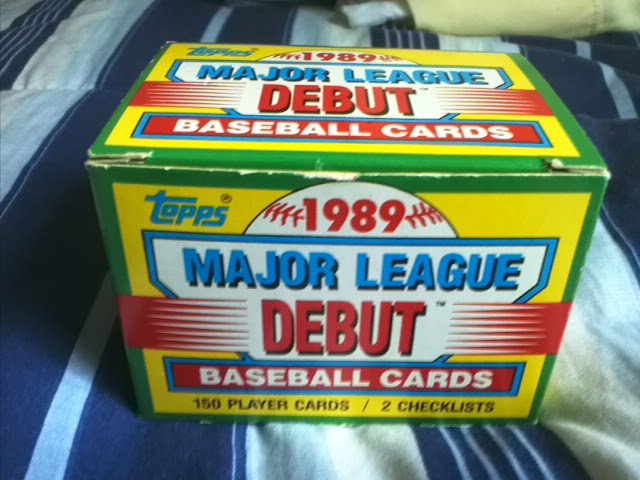 The card stocking wasn't all I found in this guy's box of randoms.

Complete sets aren't usually that high on my radar, but I couldn't help but pull the trigger on this pickup. 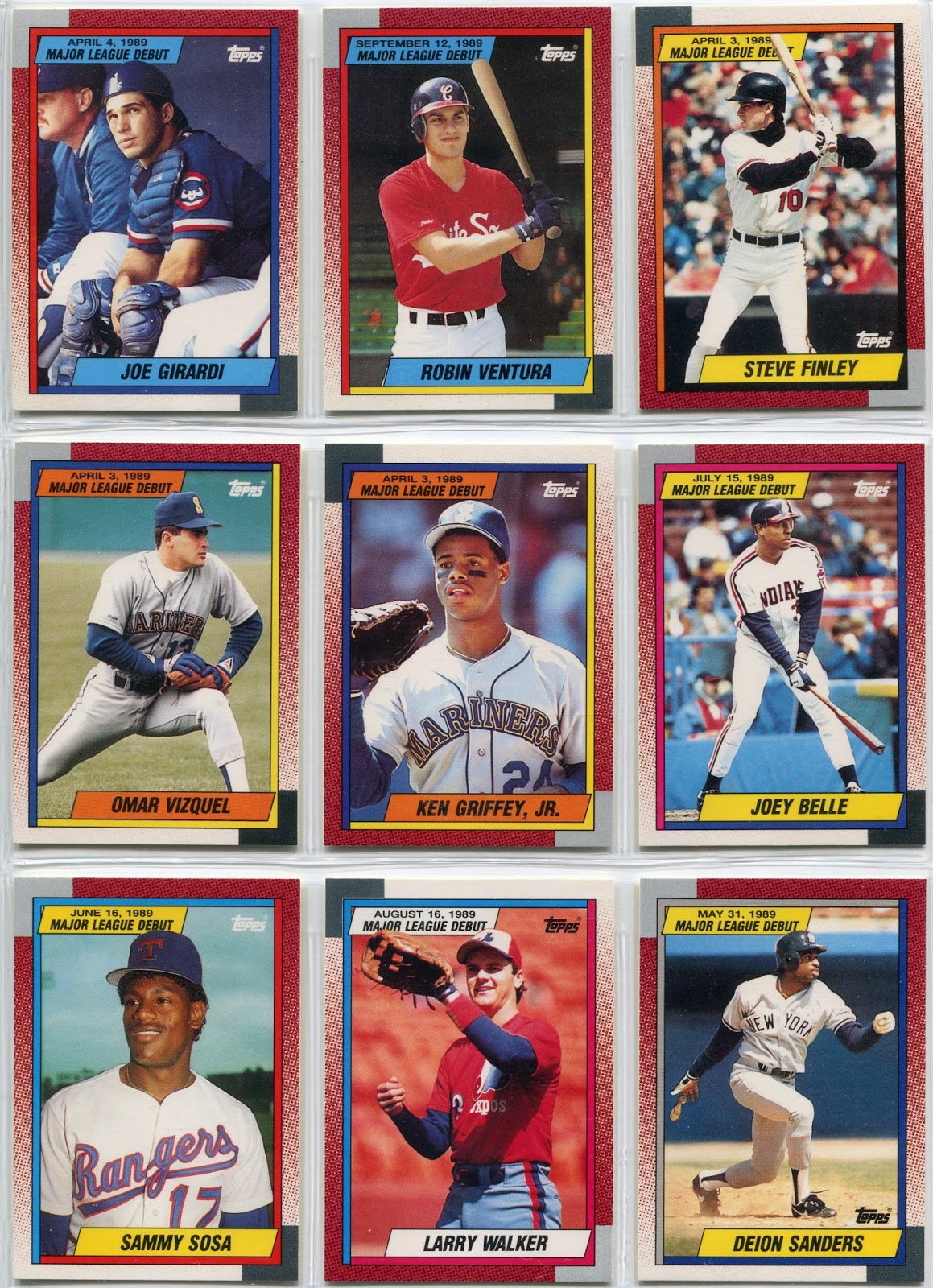 Pro Debut is a concept I wish Topps would bring back.

Each card lists the exact date of each player's big league debut. The write-ups on the back are terrific as well, going so far as to note who each guy replaced on the roster when they were called up to the majors.

Now I can win bar bets knowing that Sammy Sosa replaced an injured Pete Incaviglia on the '89 Rangers roster.

Instead of spreading unremarkable Rookie Debut cards in Update or producing reams and reams of meaningless rookie-based insert sets, I would much rather Topps simply create an offshoot brand along the lines of Pro Debut in today's hobby.

I think it would be way more successful than those lame "The Future Is Now" inserts that no one cares about here in 2014. As a fun little side note, 1990 Pro Debut features what has to be one of the extreme few Jose Cano cards ever produced.

The six games he played in for the '89 Astros would be his only taste of the bigs. He's much better known for fathering a future star named Robinson.

As you might remember, Jose Cano was the pitcher when his son won the Home Run Derby in 2011. 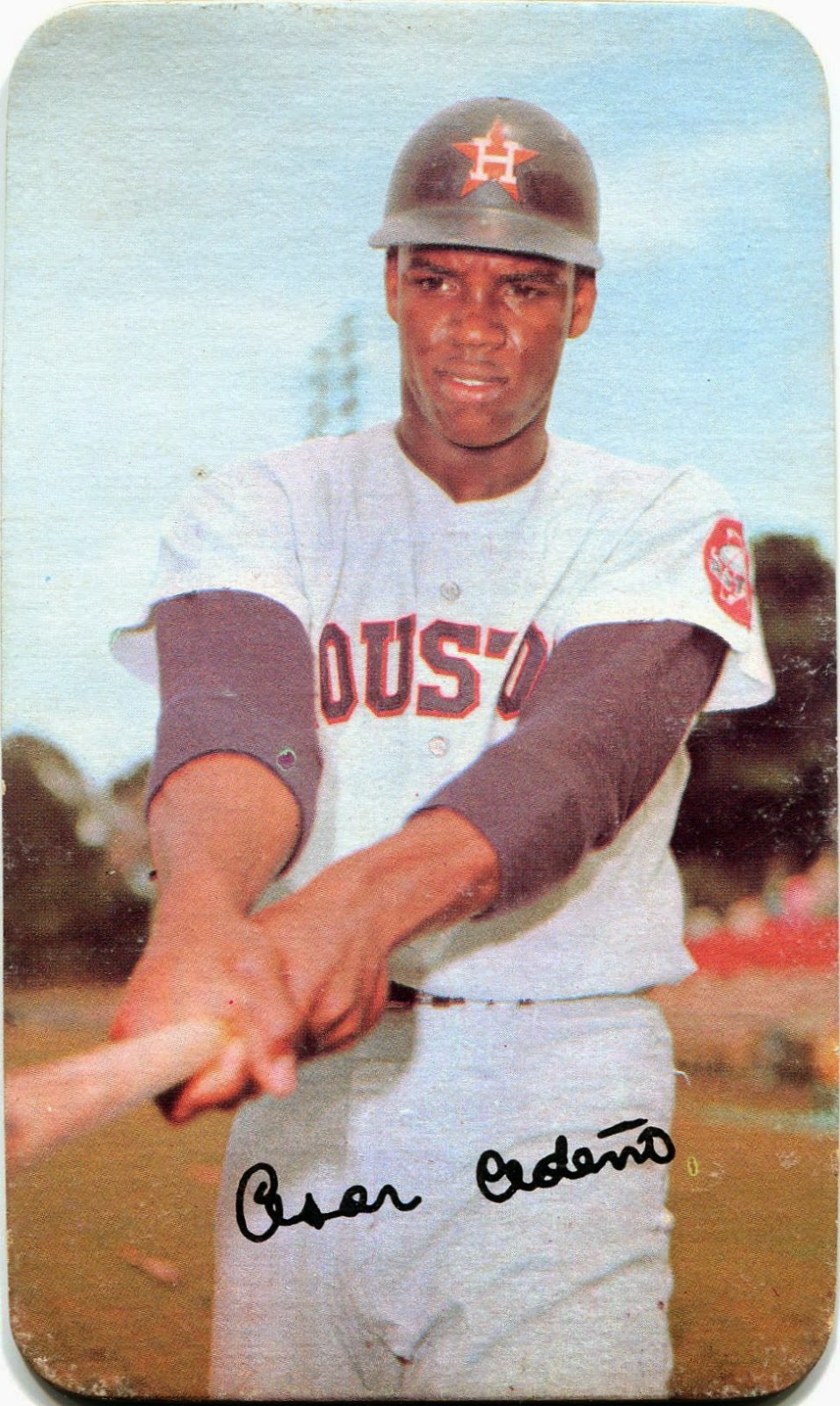 What you see here is a 1971 Topps Super issue of a young Cesar Cedeno. It was lying rather unremarkably near the bottom of this guy's box when I found it.

As the third Topps Super in my collection, I'll give it a good home.

So, for just seven bucks, I took home a giant box of 2001 Fleer Focus, a card stocking, a complete set of 1990 Topps Pro Debut, and a spectacular Cesar Cedeno vintage oddball.

How could this day get any better? 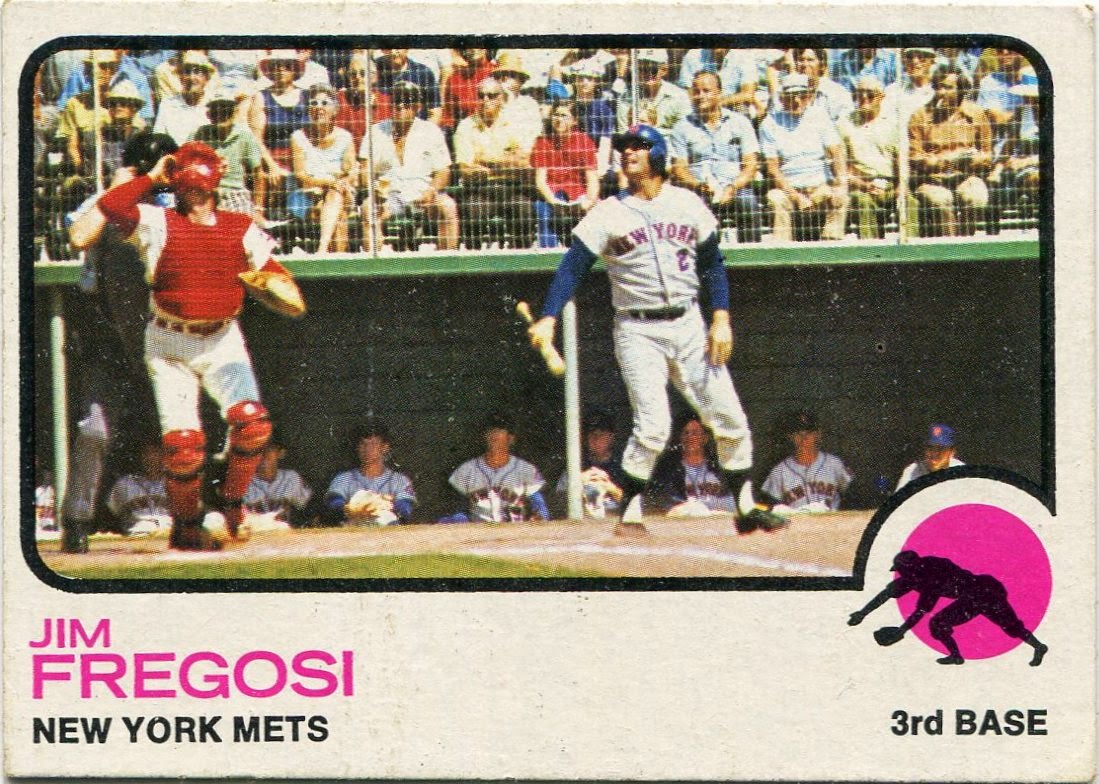 The very first table I stopped at had a few giant stacks of vintage Topps lying next to heaps of ceramic plates and tool boxes.

Besides, pecking away at huge stacks like these is much more my game. I looked through every single card he had on display, coming away with about four bucks' worth of cardboard after all was said and done.

The vast majority of what the guy had came from '73 Topps. Just when I think I've discovered all the quirky photography this set has to offer, I manage to find a pile of great shots that I'd never seen before.

This Jim Fregosi was completely new to me.

And is that a Johnny Bench cameo I see? 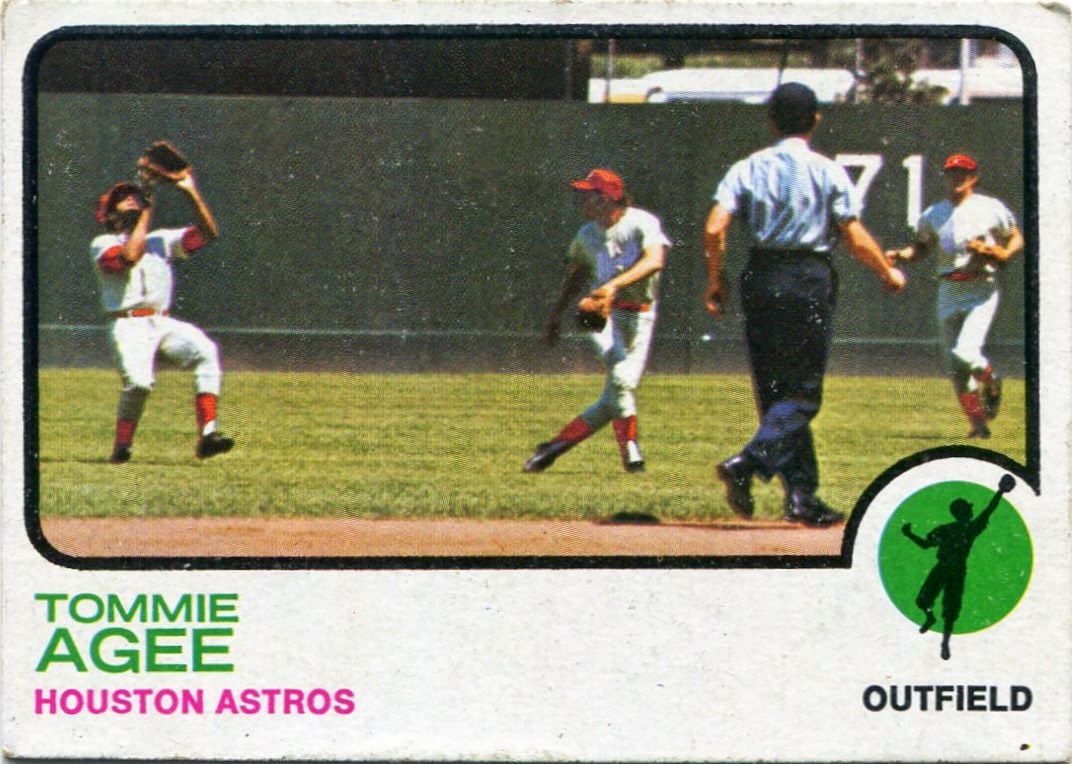 I know this card well from seeing it on other blogs.

Thanks to this flea market, I now own a copy of The Most Airbrushed Card in History.

Tommie Agee was sent from the Mets to the Astros before the 1973 season started. Not wanting to cut corners, Topps proceeded to airbrush Mets shortstop Bud Harrelson and outfielder Rusty Staub into Houston gear in order to match up with Agee's move.

One of the best quarters I've ever spent, no doubt. 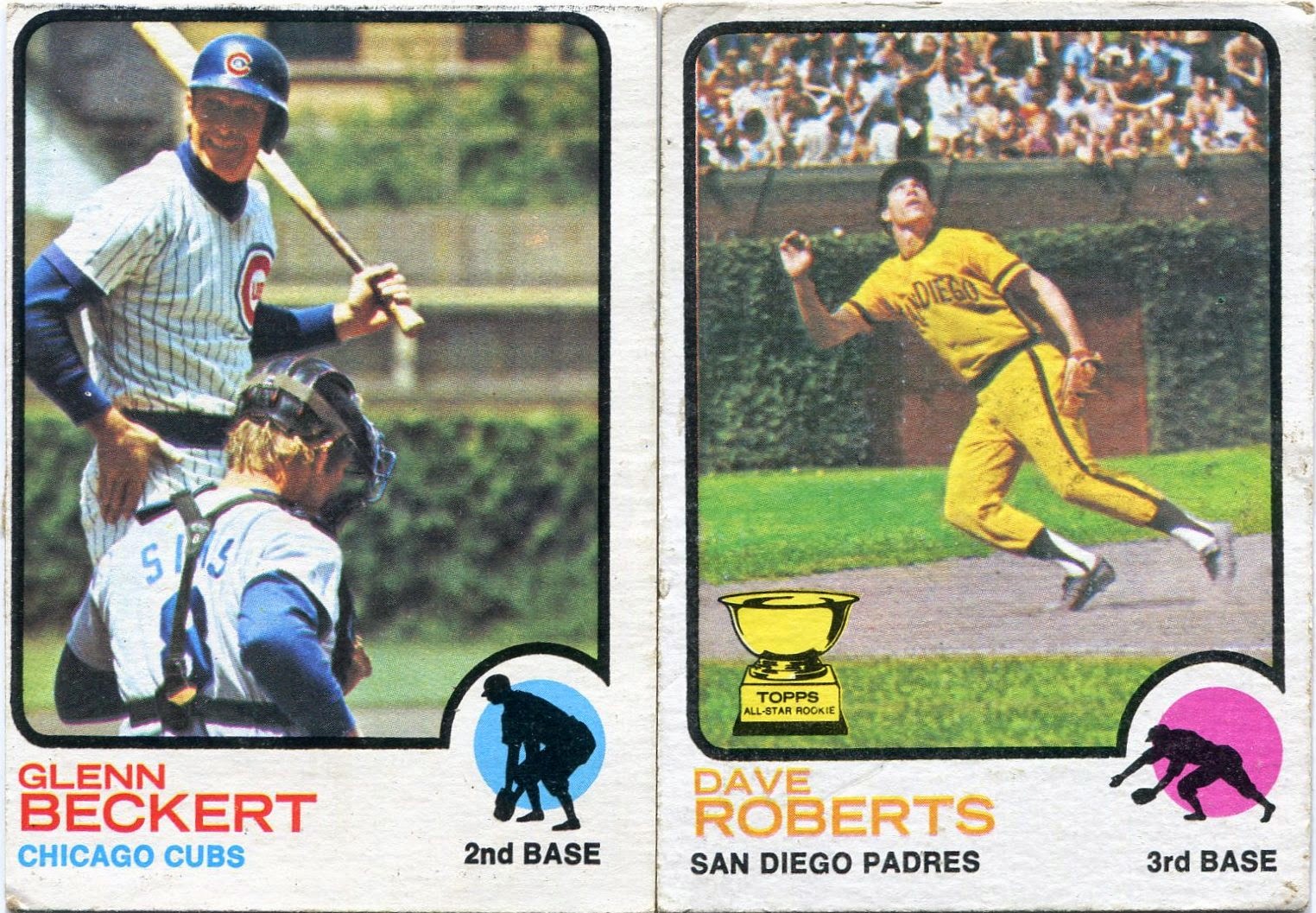 The Roberts is another card I've seen countless times before without managing to find a copy for myself.

If those early Padres uniforms make you shield your eyes... 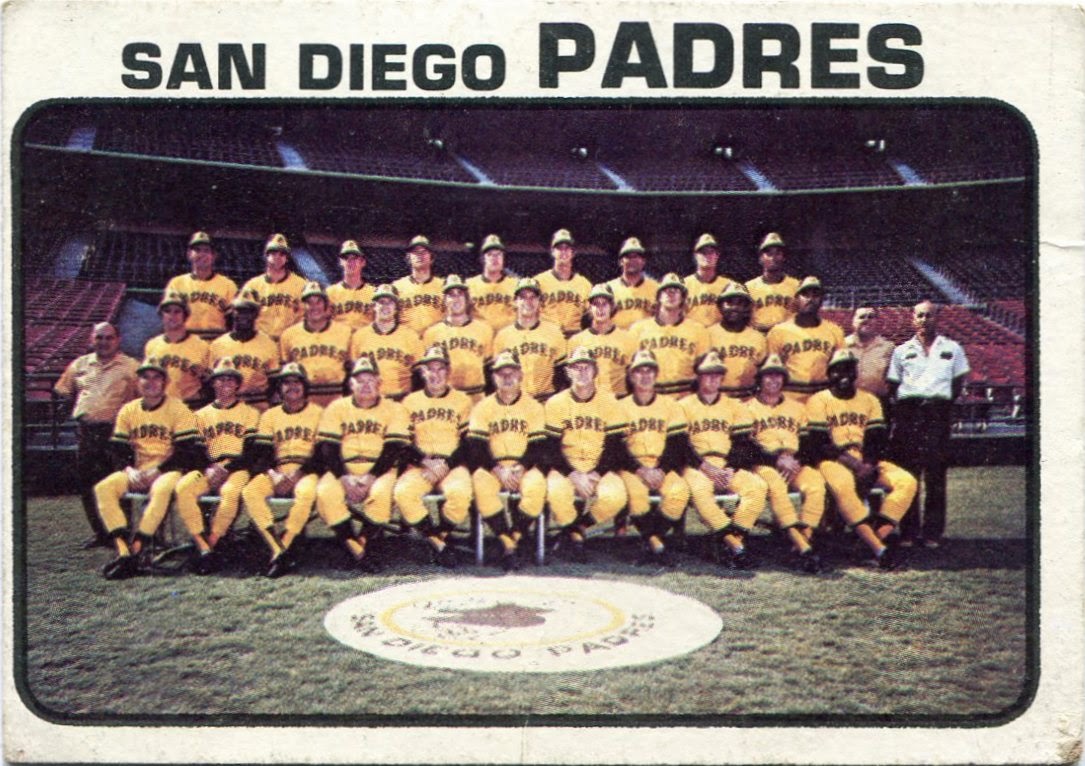 ...then this one will probably cause outright blindness.

If you look closely, you can see the late Don Zimmer in the center of the bottom row.

He managed the giant tube of mustard you see here. 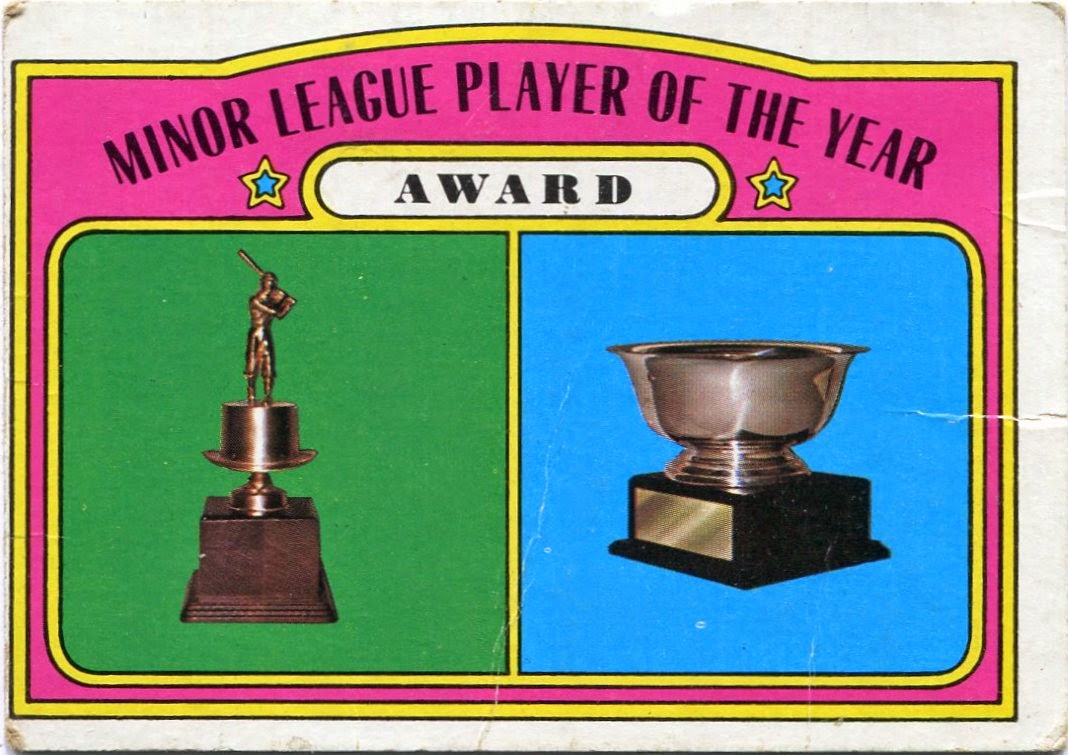 Still, a lot of the '72s I pulled were semi-high numbers. I'm not a set builder, but I know they can be tough finds. That's what made finding them for a quarter all the more shocking.

Though I've never actually sought to get one, a part of me has always wanted to find one of these award cards that were, for whatever reason, part of the '72 Topps checklist.

Since I'm such an advocate of the obscure in this hobby, I guess it's fitting that the one I found featured the obscure Minor League Player of the Year trophy. I didn't even know such a thing existed.

As the back notes, however, a young infielder named Bobby Grich took home the award in 1971. 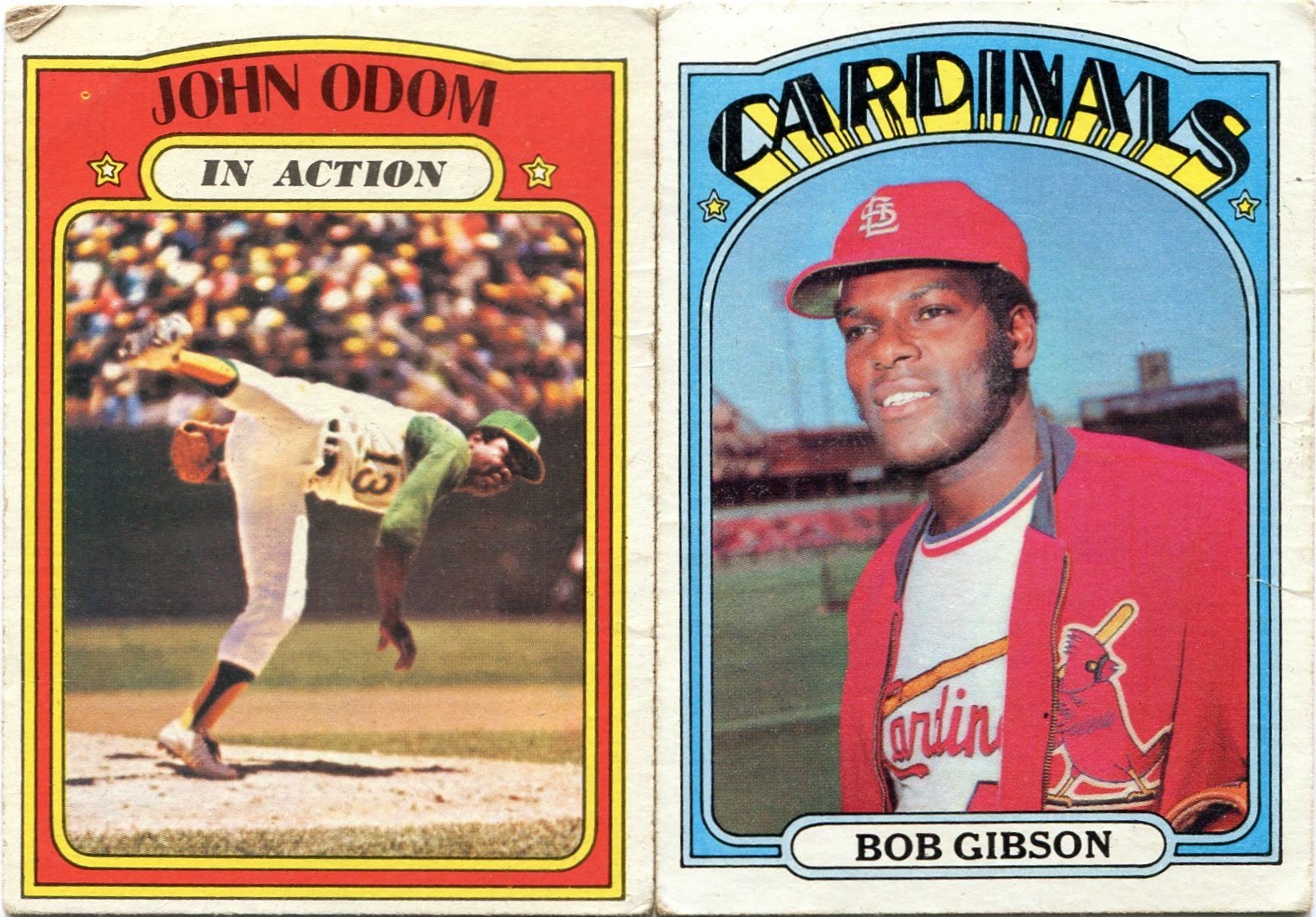 Here's some more 1972 Topps goodness for you.

I actually already had the Gibson, but the copy I found yesterday is an upgrade to the one that was sitting in my Cardinals binder.

It's hard to go wrong with a vintage Hall of Famer for a quarter. 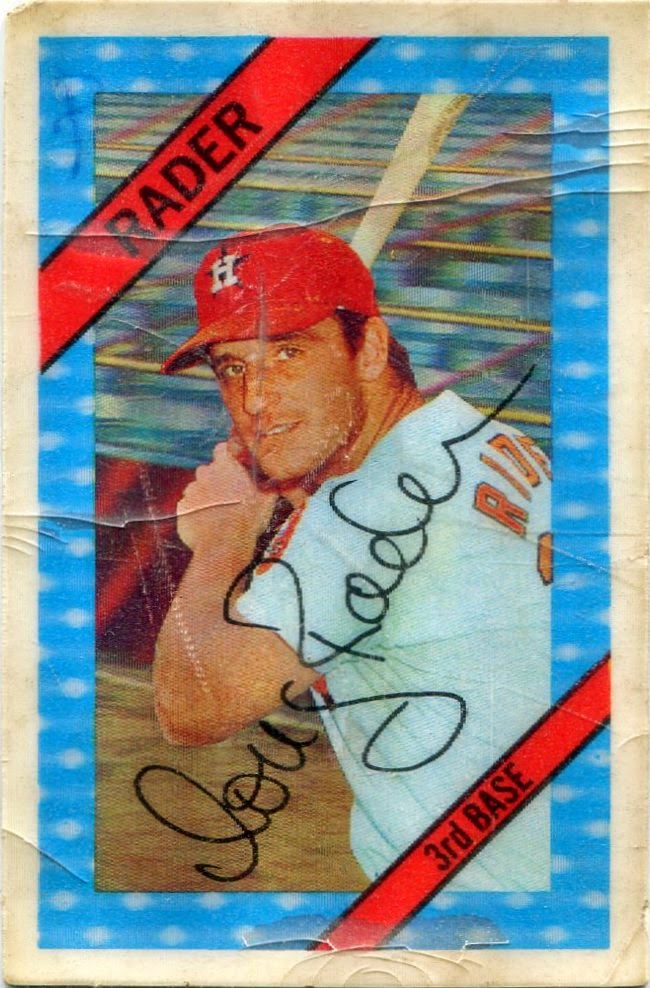 Just when I thought this guy's stacks couldn't get any better, a new development arose.

These are arguably the greatest oddballs in history. I've had a lot of luck in finding them lately. I guess yesterday's flea market continued the trend.

I only found a pair of '72 Kellogg's singles at this guy's table. The first featured Doug Rader. I collect him, but he's not exactly a name most casual baseball fans would know.

The other guy I found... 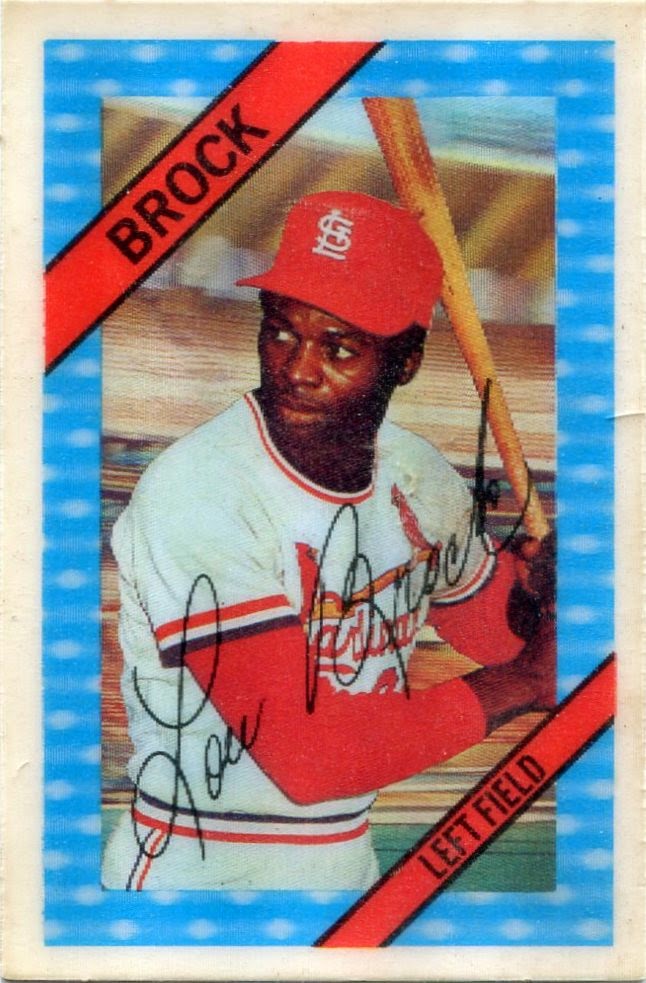 To my utter disbelief, I dug up an authentic 1972 Kellogg's Lou Brock in a stack of flea market quarter cards.

An oddball of a Hall of Famer and one of the greatest base stealers in history.

For a measly quarter.

Between the Brock and everything else, I spent a grand total of eleven dollars last afternoon.

I can go on and on about the different strategies I have when it comes to finding new cards and whatever else, but I guess that all went out the window yesterday.

Sometimes, you just have to be lucky.
Posted by Nick at 6:45 PM

Too much fun!! I'm all over those ML Debut sets some day. Great stuff.

Ur right about that Will Clark in a throwback uni. Great card.

That Giles is pretty sweet

That Rockies team set was one of my first acquisitions way back when. Still have them all; I even got the Darren Holmes card autographed.

I love reading everyone's flea market pickups. You did really well. I'd be all over the Topps Debut set. Totally regret selling mine back in the day. And my goodness you killed it on those vintage. Nice finds.