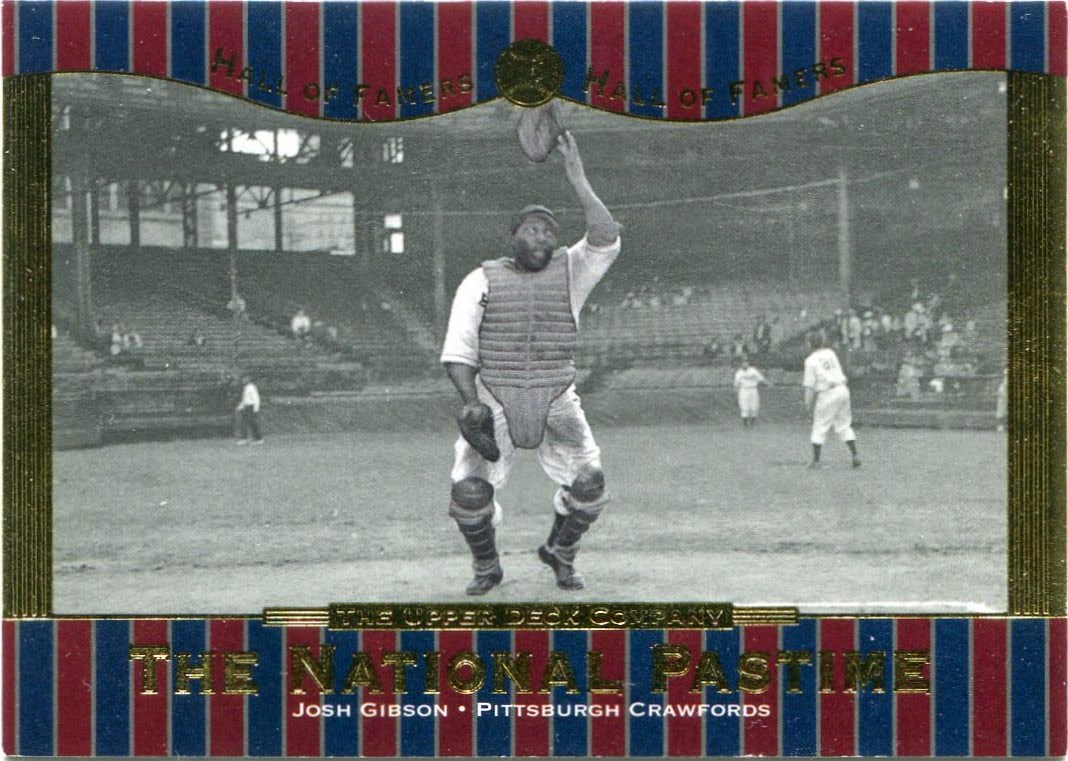 I've barely touched my baseball cards these past few days.

I guess it's just a combination of apathy, drowsiness, and lack of time. This summer class I'm taking is a lot of fun, but also a lot of work. It's basically an entire semester crammed into two weeks. That doesn't leave a ton of time for cardboard.

I see this magnificent Josh Gibson card every time I walk into my room. It sits atop a stack of Negro League-filled snap cases on my nightstand. I haven't had the slightest urge to take a look through those snap cases the past couple days.

In the past, I'd be worried when something like this happened. I'd ask myself some odd questions.

Do I even want to collect anymore? Have I lost interest in baseball cards?

I know better now. My love for the hobby isn't going to fade if I take a slight vacation from cards. Everyone needs a few days off now and then, myself included.

Still, I think there are a few things we should all ponder at some point. Much like life, baseball cards have a few basic eternal questions that need to be considered.

Even if you don't quite have the answer to all of them. 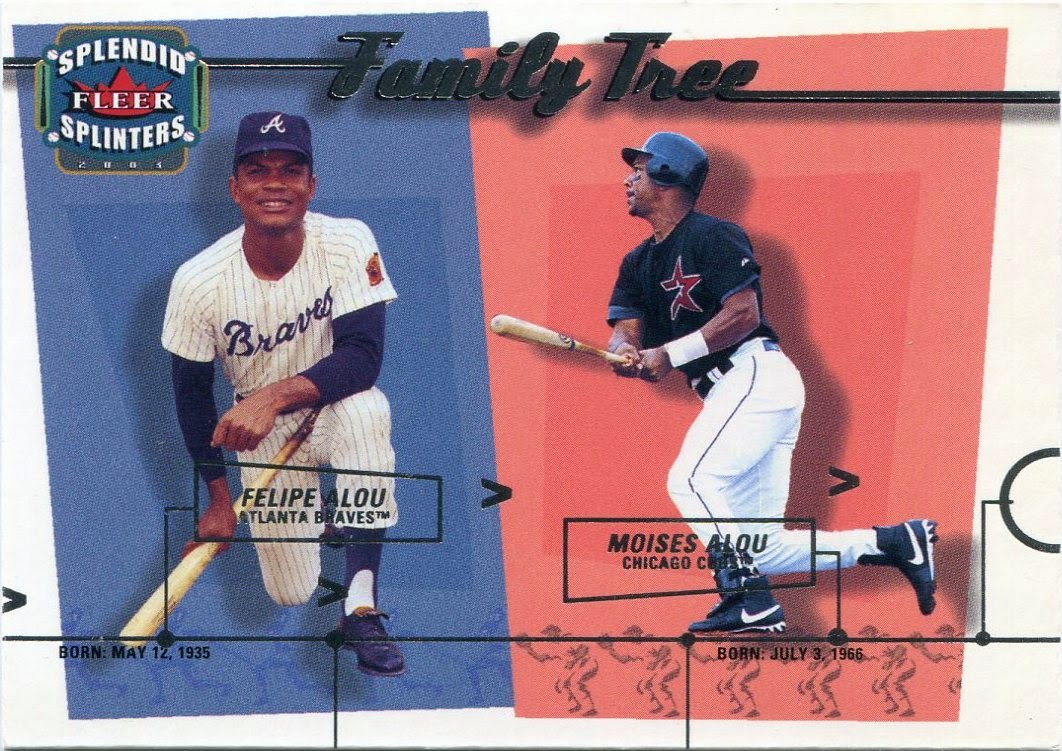 Why do I collect baseball cards in the first place?

Why have we picked up the hobby when other devout fans haven't?

Aside from perhaps my childhood love for Beanie Babies, I can't say I've ever collected anything else in my life. I've never dabbled in comic books or stamps or anything like that. It's not like baseball cards are simply another notch in the collecting fold for me.

Part of it may well be genetics, though. My dad has a similar one-track collecting mind. As I've mentioned many times before, he goes after records, records, and more records. I'm the same way with baseball cards.

On top of that, a lot of it has to do with honoring the game I love so much. Baseball cards are simply an extension of my baseball fandom.

If I hear someone talking about Jon Lester on TV, I get a sudden urge to look through my cards of his. If someone mentions Miguel Cabrera's batting average in 2010, I want to check the stats on the back of his card. 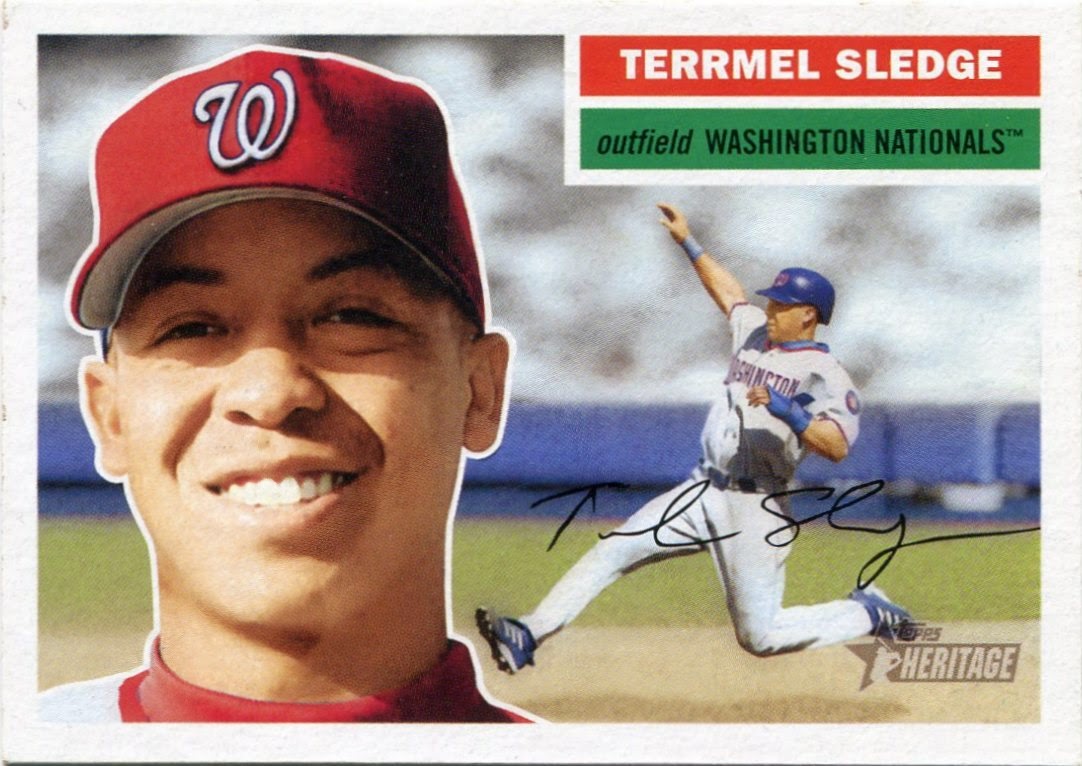 Why do I collect the way I do?

I can't speak for why one person may be a set builder while the other is a set collector.

Everyone has their own reasons for collecting the way they do.

I, of course, chase after more different things than I can count. Some of my quests are fairly rational. Take my Hall of Fame collection, for instance.

But then there are others I just can't explain. Why do I get such a big kick out of "zero-year" cards? And why am I probably the only Terrmel Sledge collector on Earth?

I guess I just don't like to limit myself to a set quota of different themes. I completely understand why that would work for some people, but it doesn't for me.

Collecting all these different things has allowed me to explore the world of baseball cards in a way that might not have been otherwise possible.

And I'm extremely thankful for that. 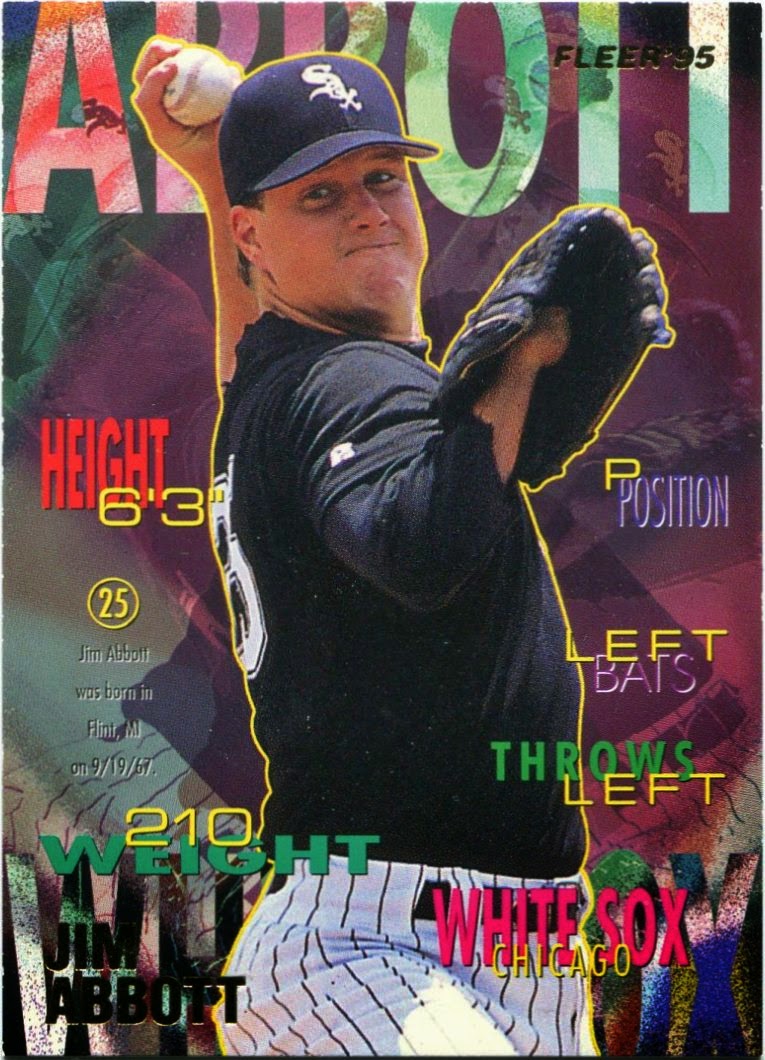 What do I look for in a baseball card?

For a while, I thought I had a decent handle on this question.

I'm a "back to basics" kind of guy. I like sets with simple designs. Not too flashy, but captivating enough to hold my interest. Seems logical enough, right?

I didn't want to admit that I liked it. More importantly, I didn't know why I liked it. I still don't. For a long time, I chalked it up as some sort of unexplainable outlier.

But then crazy sets like Panini Triple Play started to kindle my interest, throwing my whole "back to basics" philosophy completely out the window.

So, what do I like in a baseball card?

I have no idea. 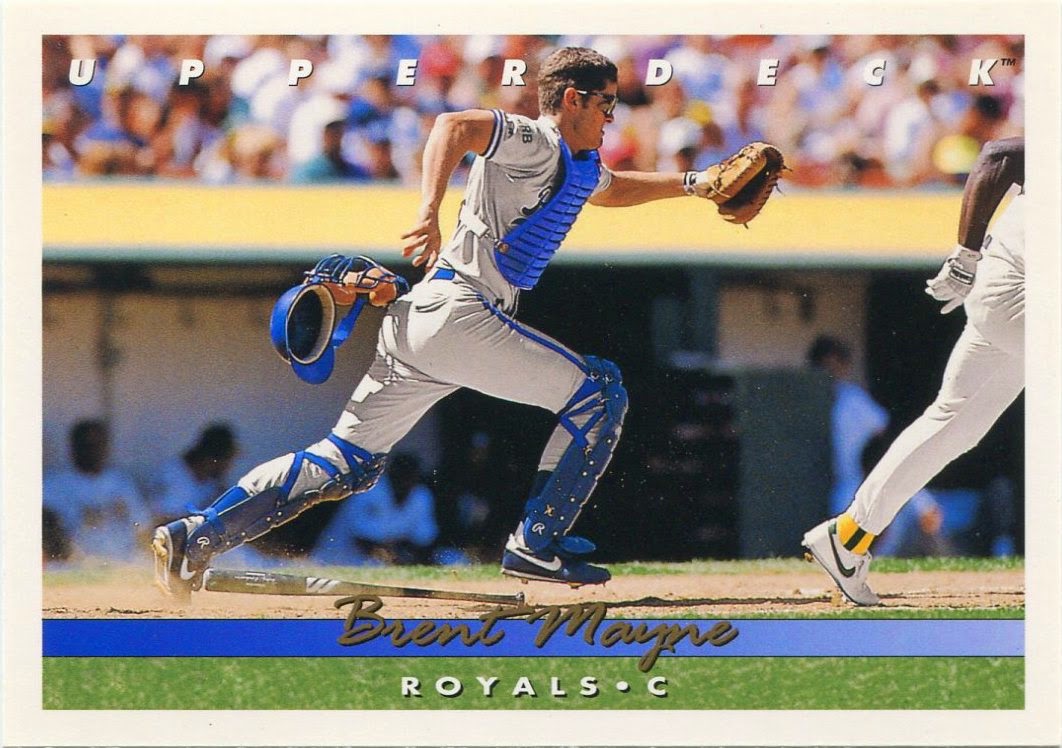 Why is blogging so important to me?

I first asked myself this question in early 2012, after I know I was into this whole blogging thing for the long haul.

I read blogs for a long time before starting this one. I didn't know how to do it, and I didn't know that I could do it. But then I discovered something amazing.

Everyone can blog. It doesn't take any specific skill. Better yet, you can do it at whatever pace you please. Twice a day? Great. Twice a week? Fine. It's up to you.

To me, a big part of blogging involves interacting with a great group of people that share a similar love of baseball cards. That's something I haven't found in everyday life yet. I can imagine myself tapping the shoulder of a random guy on the bus.

Say, did you ever notice that Brent Mayne had an abnormal amount of great cards issued during his career?

He'd think I was crazy.

Here, people actually care what you have to say about baseball cards.

That's what makes it so special. 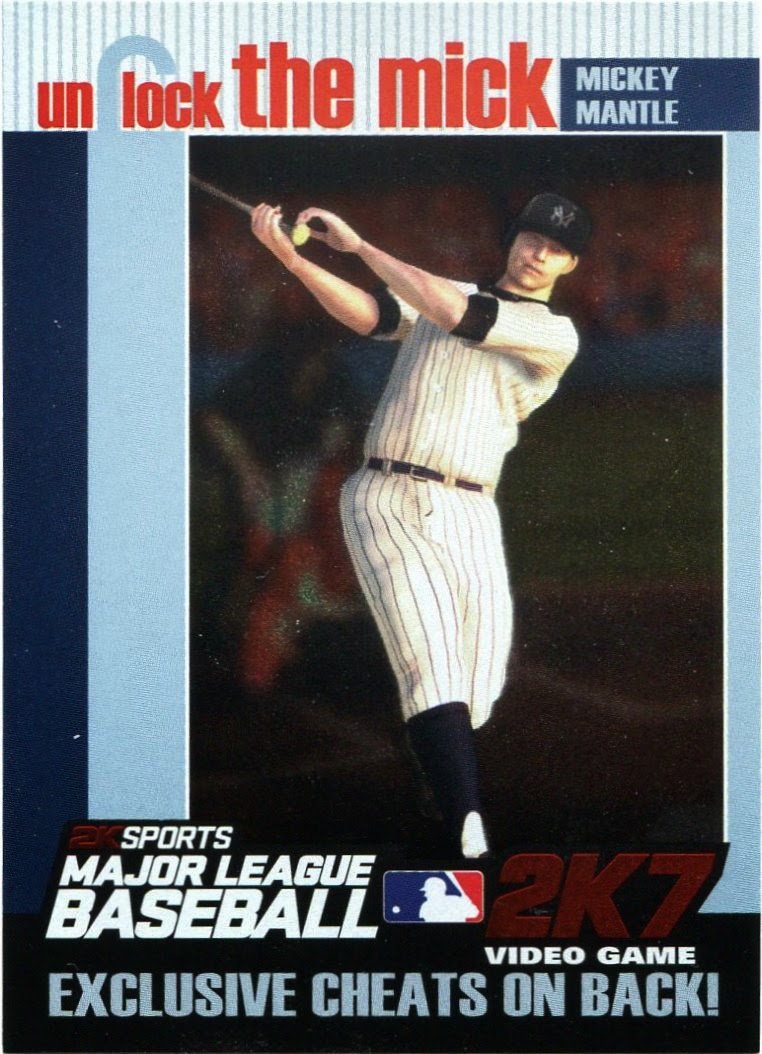 What would I do without baseball cards?

This is my favorite of the eternal questions, and probably the one I ask myself most often.

I've never found a true answer, and I doubt I ever will.

Unlike a lot of other people, I collected straight through high school and beyond. Sure, there were things like girls and AP tests to distract me at times, but I never took a break from baseball cards. That's when I start to play the "What If?" game.

What if I stopped collecting during high school? What would've happened to me?

Once you drop something, it's hard to pick it back up again. There's a chance I would've returned to collecting had I taken a high school hiatus. But, then again, maybe not.

Maybe I'd be some sort of delinquent without baseball cards to fill my spare time. I like to think that isn't true, but you never know.

However, I seriously do think I would've fallen deep into the world of video games without baseball cards. Though I had bouts with Xbox or whatever at times, I never got too into the gaming world.

I didn't have the time, energy, or money to support baseball cards and video games. I decided long ago that I liked two-by-three pieces of cardboard way more than images on a TV screen.

I have to say, I think I made the right choice.

The decision to collect baseball cards is a wonderful and rewarding path.
Posted by Nick at 6:19 PM

Pokeman
Yu-ghi-oh!
Matchbox cars
Those quarters with the states on 'em

I also inherited the collecting gene from my dad but as he collected many things so do I, books, records, Peanuts, sheet music, cards etc.

I come from a long line of hoarders. Part of me would like to go to my mom's house -- where she was born 67 years ago and where my grandparents lived since the 1930s -- and go through all the boxes that are everywhere. I'm seriously hoping for the next unearthed stash of Goudey cards or something.

Seriously, it's cool that you haven't taken a break from collecting. I sure wish I hadn't slept on the hobby around the turn of the century. Chronological holes in a collection can be aesthetically disturbing.

Like you l jave never taken a break collecting. I often wonder what I would do if I didn't collect cards. Thankfully I dont have to worry about it.