Battle of the warped rack packs 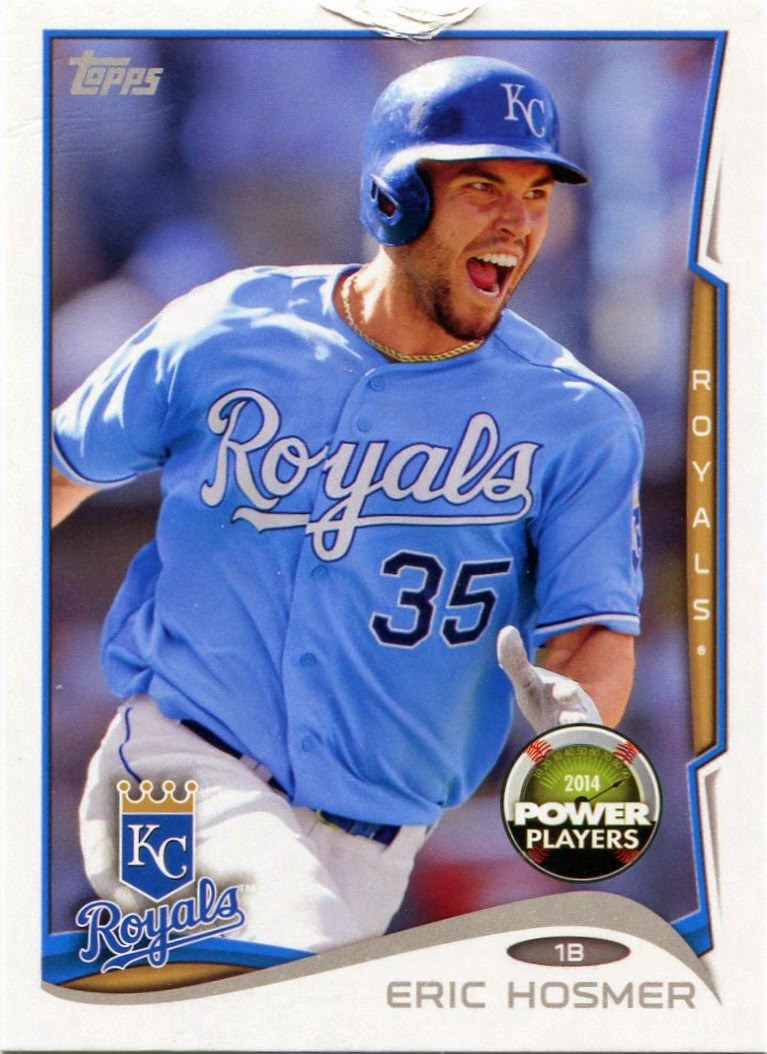 It hurts me to say this, but my trips to Target have happening less and less.

If I had a graph to document such a thing, it'd look like one of those cartoonish types where the arrow zooms straight down off the page.

I wish I were more saddened by it, but I'm really not. Except for repacks, my local Target doesn't have much for me these days. A&G is on the shelves, but I know better than to drop three bucks on a six-card pack of the stuff. They all wind up in dime boxes sooner or later.

Until Update comes out, I don't know that I'll have a good excuse to check out anything new on the shelves. My Series 2 needs are small enough that I can (hopefully) get the rest I need via trade. That was helped by a pair of rack packs my dad and I plucked off the shelf last week.

As is the case whenever I buy two of something, it's time for another edition of "Pack Wars". Points awarded as I see fit.

My local Target certainly isn't doing itself any favors when cards like these fall out of a rack pack. Note the giant crater at the top of this warped Eric Hosmer "Power Players" insert.

Rack pack #1 isn't off to a great start. 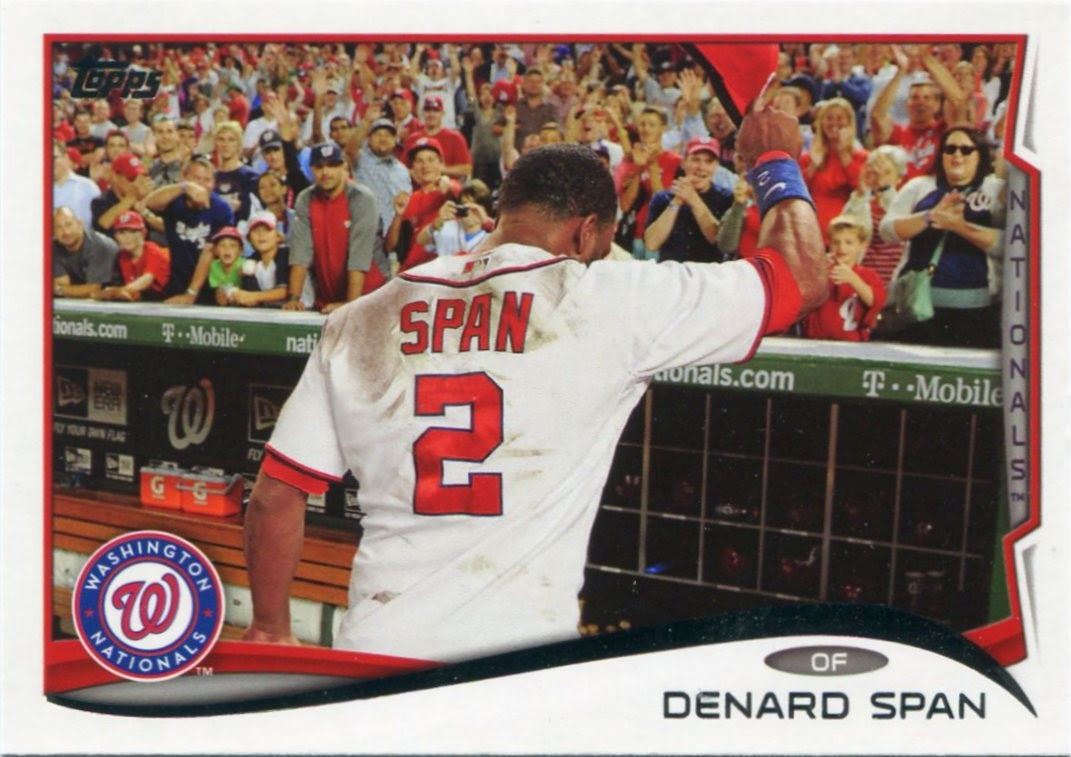 This is a great card, and one I've seen on a few other blogs already.

I've been considering starting a "tip of the cap" mini-collection lately. Mr. Span and his dirtied uniform would obviously be one of the top nominees in that department.

Look for a future post on the subject soon. 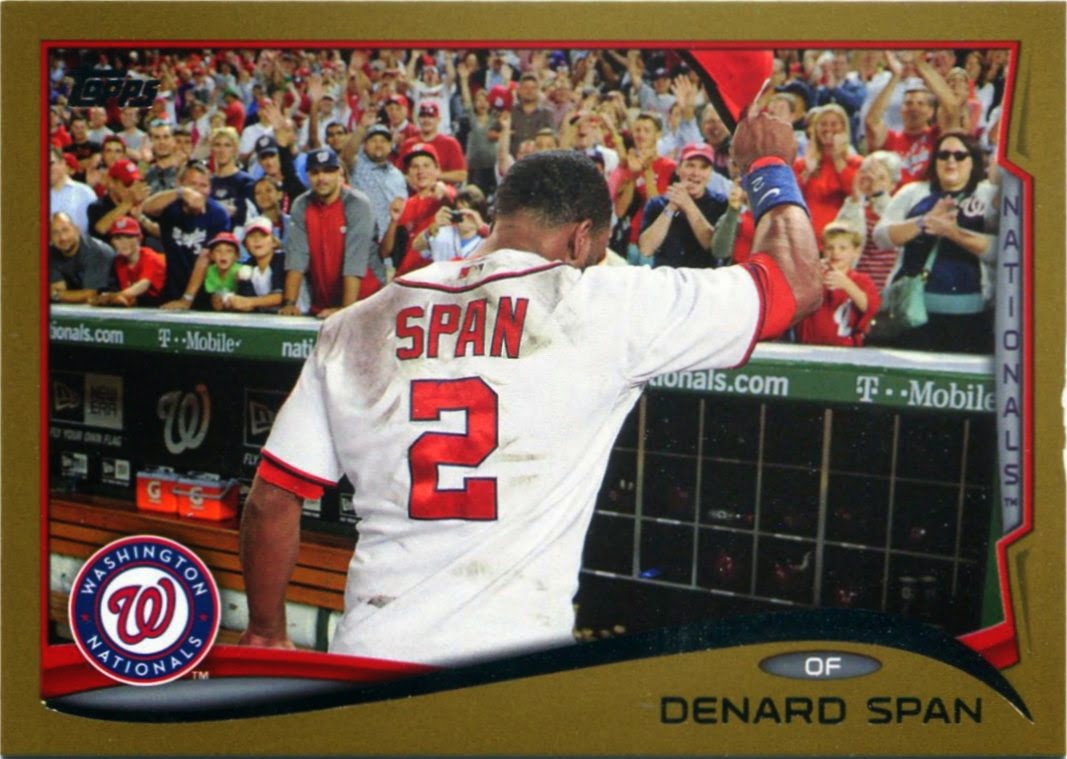 The very next card after Denard Span was his golden brother.

You can see some slight fraying on the right side of this one as well, though nothing as bad as the Hosmer. When I pull cards like these, I tend to think someone at Topps quality control wasn't doing their job.

However, since I got burned with a similar rack pack last year, I'm starting to think it's the fault of an employee or two at my local Target. You'd think it'd be common sense, but people who don't know anything about baseball cards might not realize how to handle them.

Granted, I'm not a condition stickler. Still, when I buy something new from a retail outlet, I expect the condition to match the product. It'd be like getting a scratched CD or something.

That is, if anyone still buys CDs. 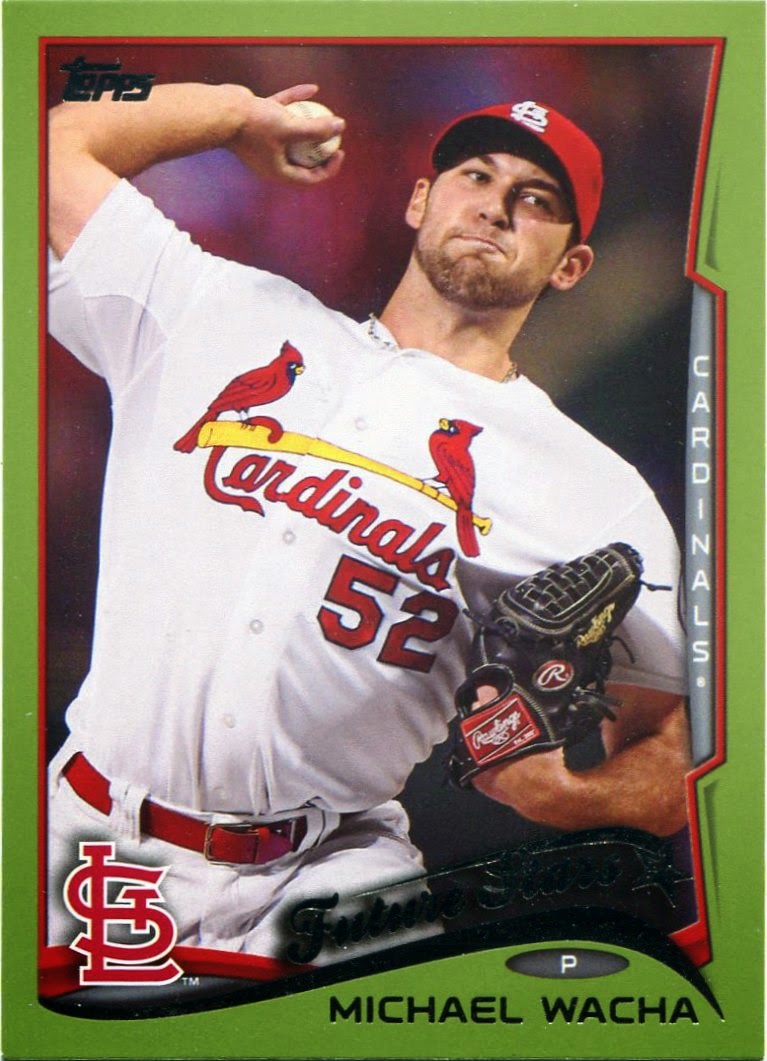 I pulled Wacha's sunburn parallel in the first Series 2 rack pack I opened. I now have his pea soup variation to go along with it. Trouble is, I haven't pulled the base card yet.

It's not doing my OCD any favors. 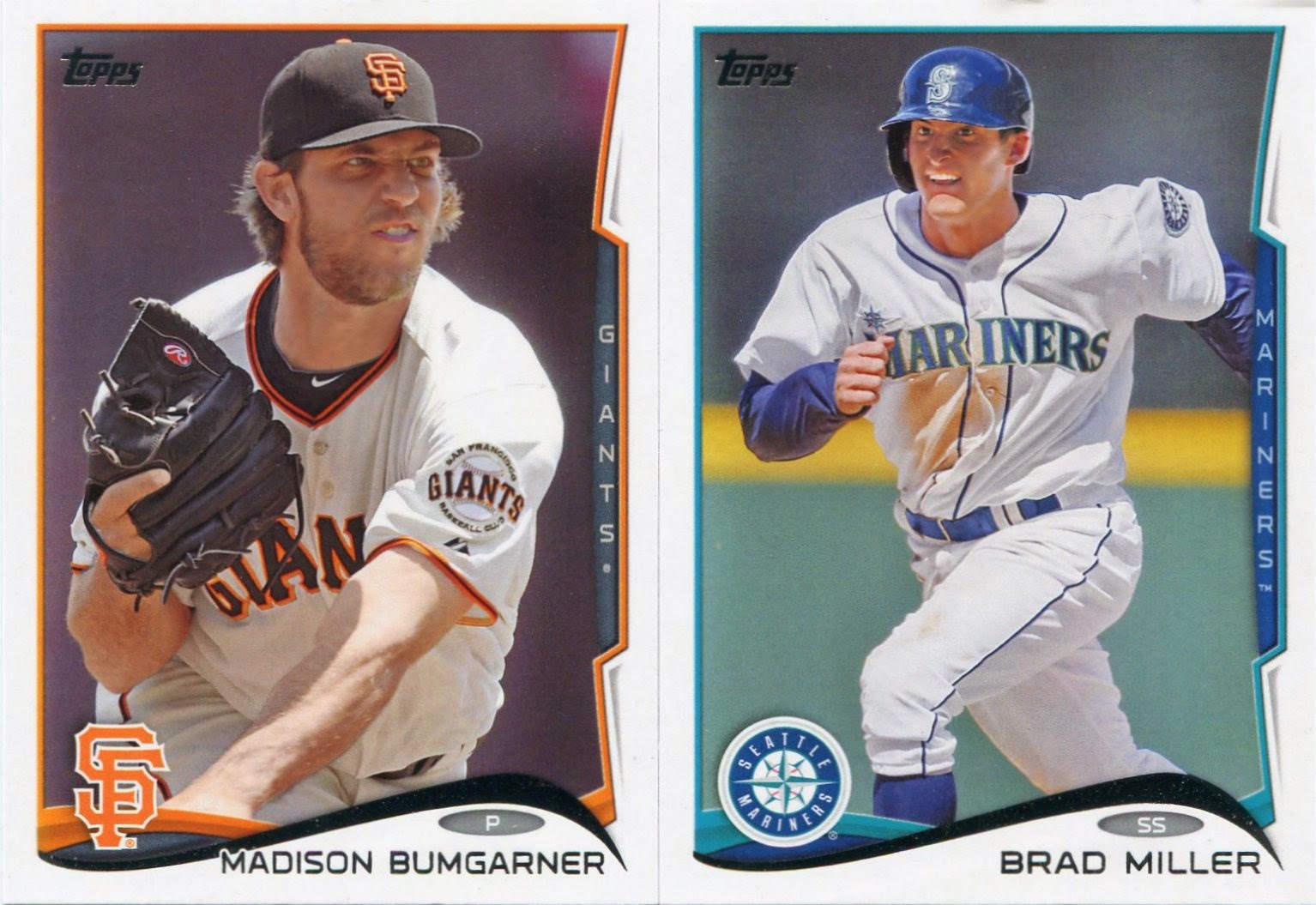 This isn't a new observation by any means, but the faces on a lot of these Series 2 cards are starting to bug me.

It's a shame that Topps thinks this is creative. Hey, look! Action faces of the game's biggest stars! 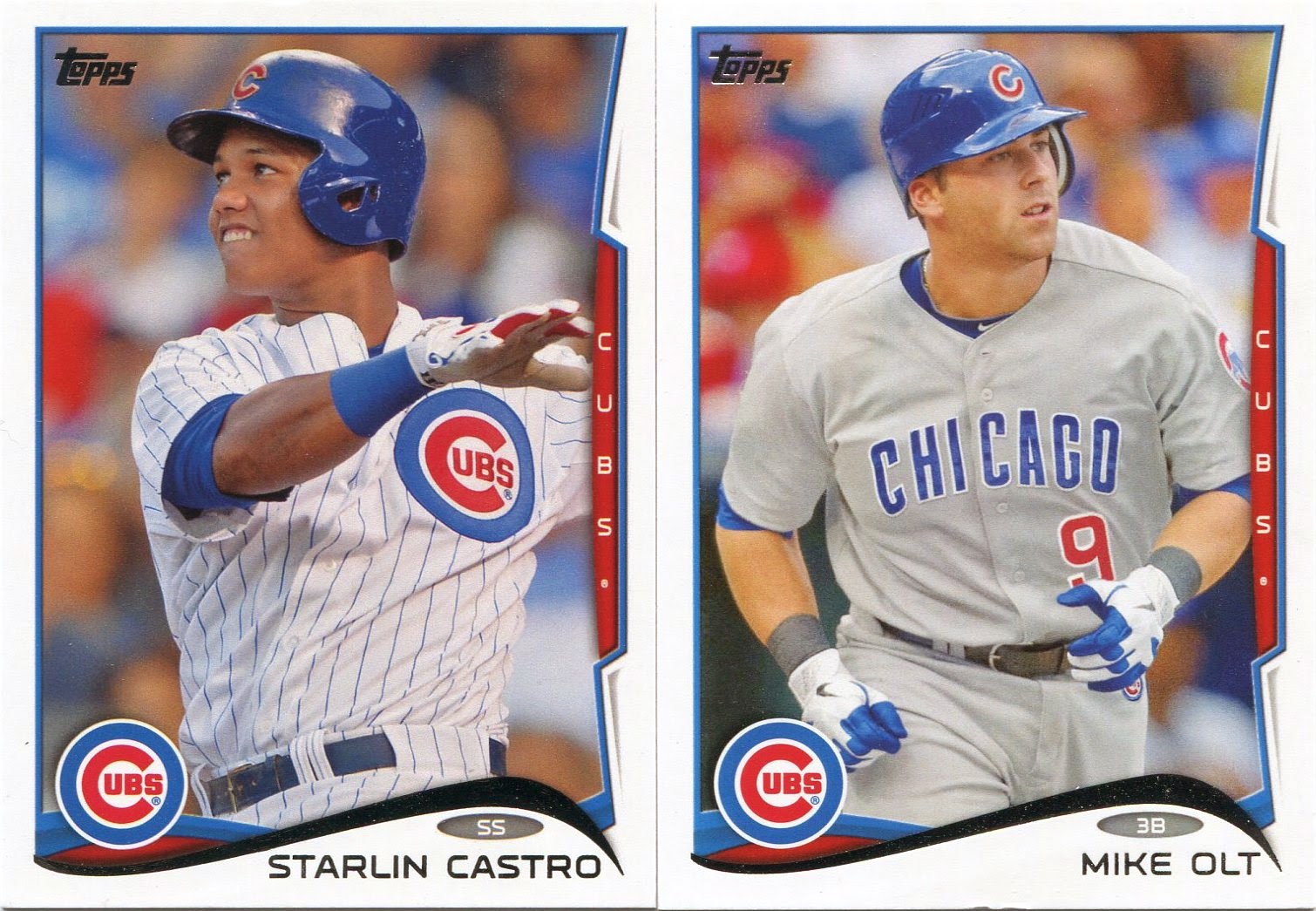 Mike Olt is having a strange season. He's hitting a whopping .150 (with a .229 OBP), and he's struck out 72 times in just 167 at-bats this year. But, last I checked, he was leading National League rookies in homers. He smacked his 11th dinger of the season last night.

He has the power, but Olt strikes out way too much to be considered a viable option down the road at this point. Part of me still believes he'll put it all together in the coming years.

Maybe that's just the hopeless Cubs fan in me talking. 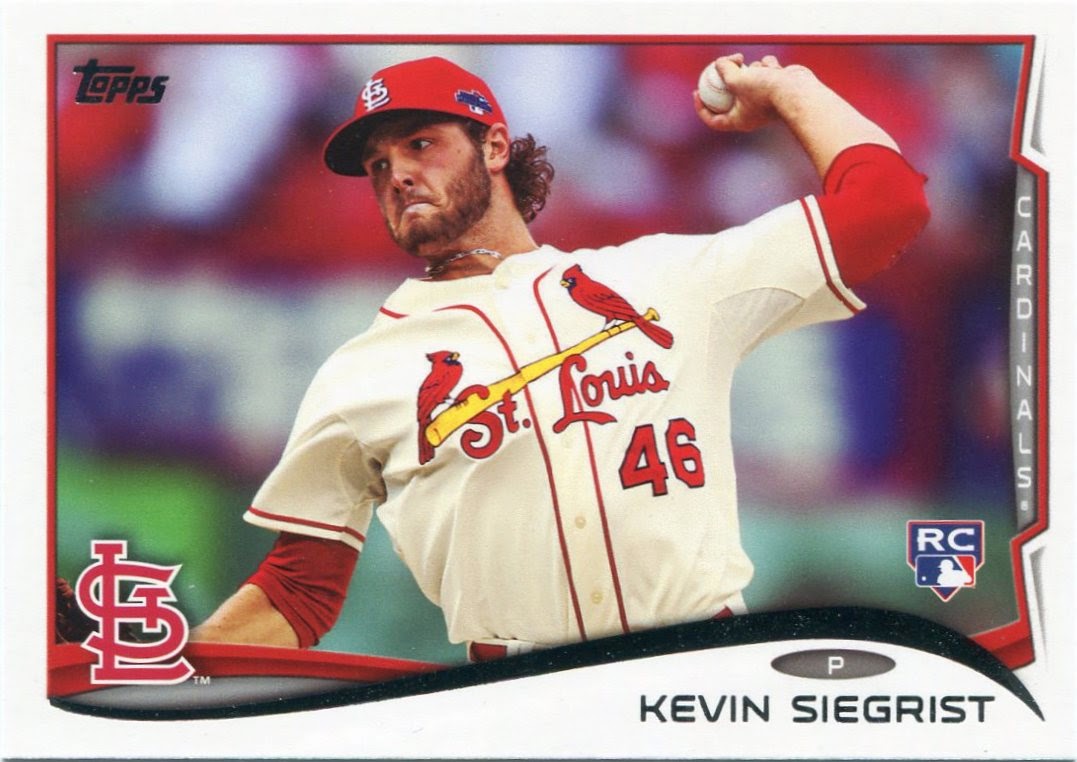 My mom and I are going down to St. Louis in a couple weeks to catch a Cards-Dodgers contest.

I'm excited, to say the least.

Maybe they'll even be wearing these sweet throwbacks when we see them. 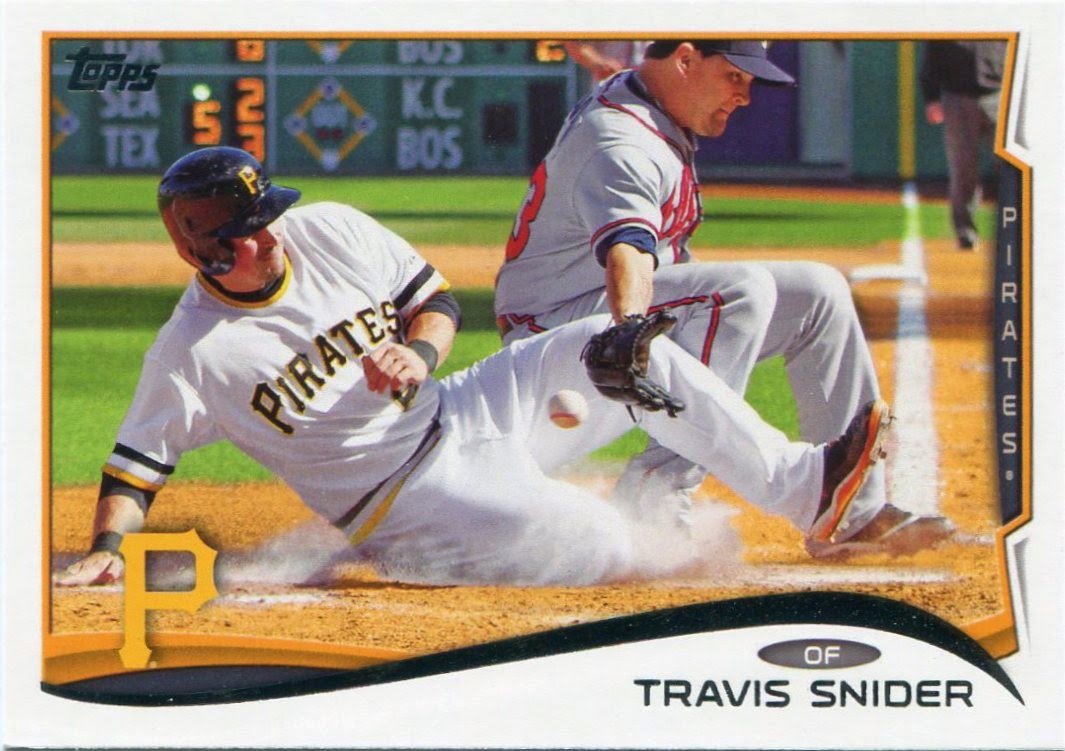 Plus, I'm just now noticing how trippy it is to see how far the first base line stretches in this shot. 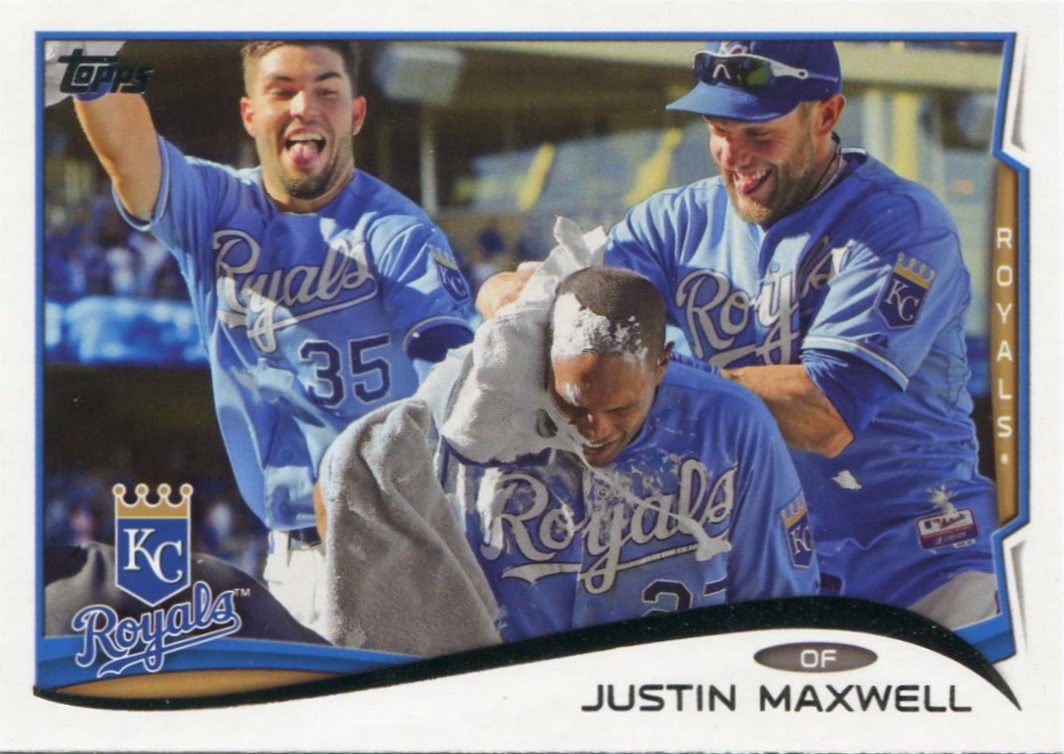 Here's an early nominee for "Card of the Year".

Now that Topps isn't going as hog wild with these "pie in the face" shots as they did a couple years ago, I'm starting to like them a whole lot more.

Plus, it's hard not to enjoy the Eric Hosmer and Alex Gordon cameos.

Thanks for not massively short-printing this one, Topps. 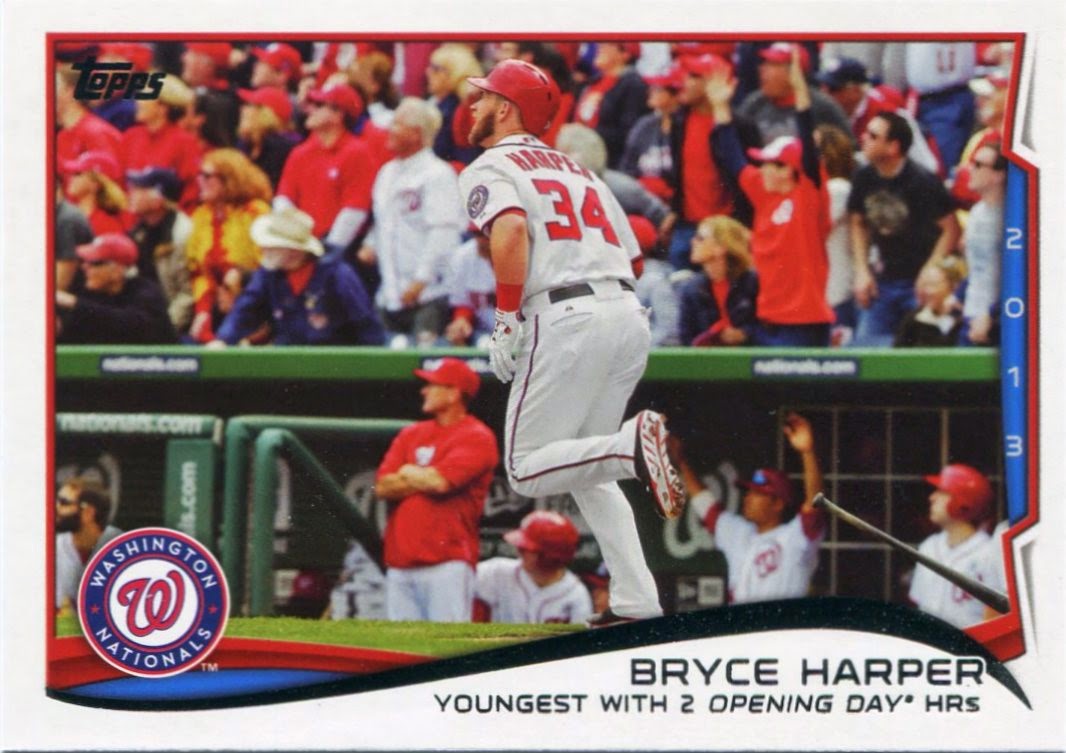 Rack pack #2 got off to a hot start with Mr. Harper.

I snagged the red parallel of this one in my initial Series 2 breaks. It's great to have the base card snuggled alongside it in my Nationals binder. 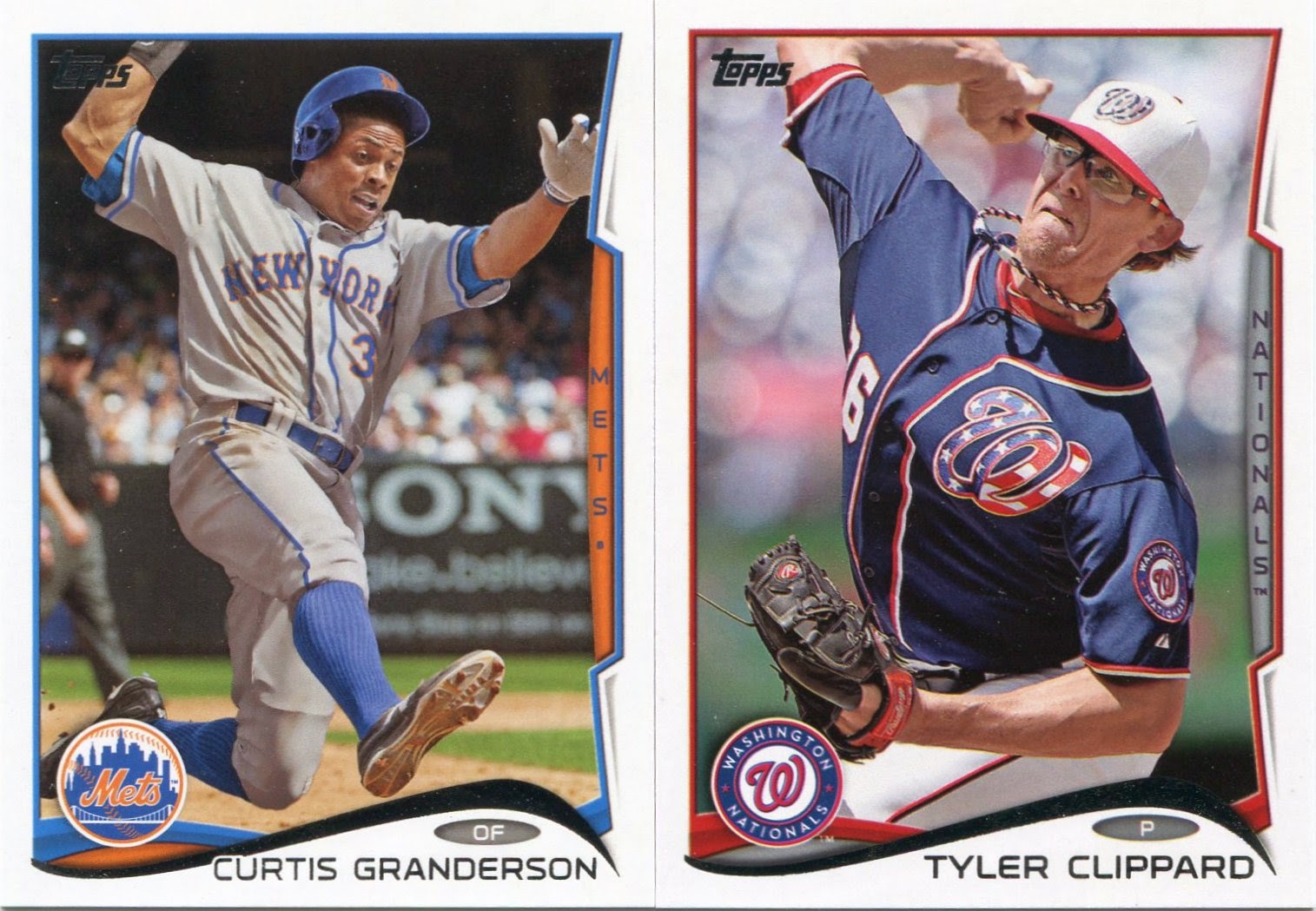 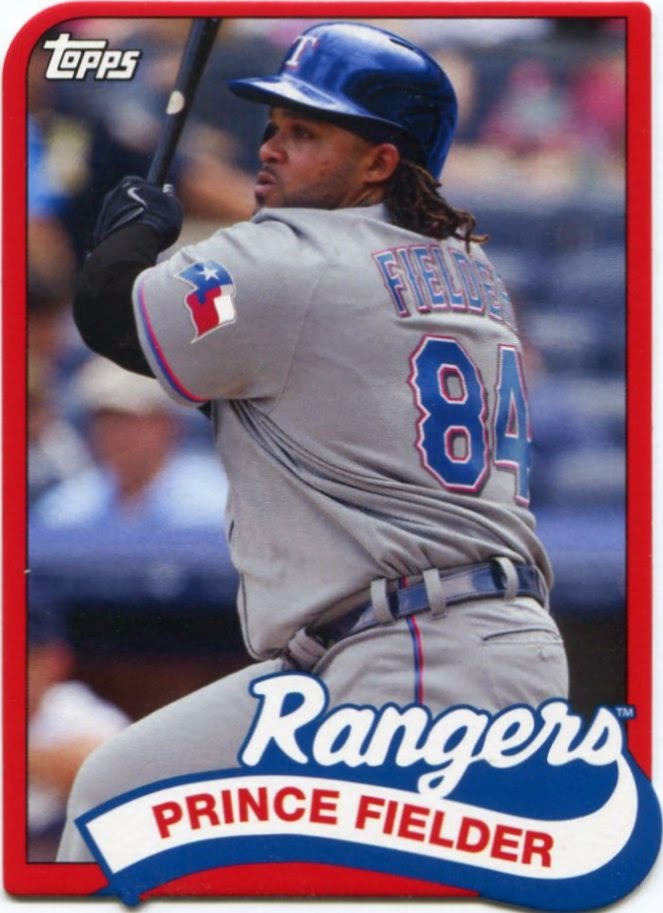 Unlike the first one, the base cards in this rack pack were astoundingly unspectacular.

At least the inserts tried to make up for it. Despite his recent woes, I was excited to pull this Prince Fielder '89 mini insert. I'm thinking that shot is photoshopped, but it's tough to tell for sure.

I still can't get used to seeing #84 on the back of his jersey. 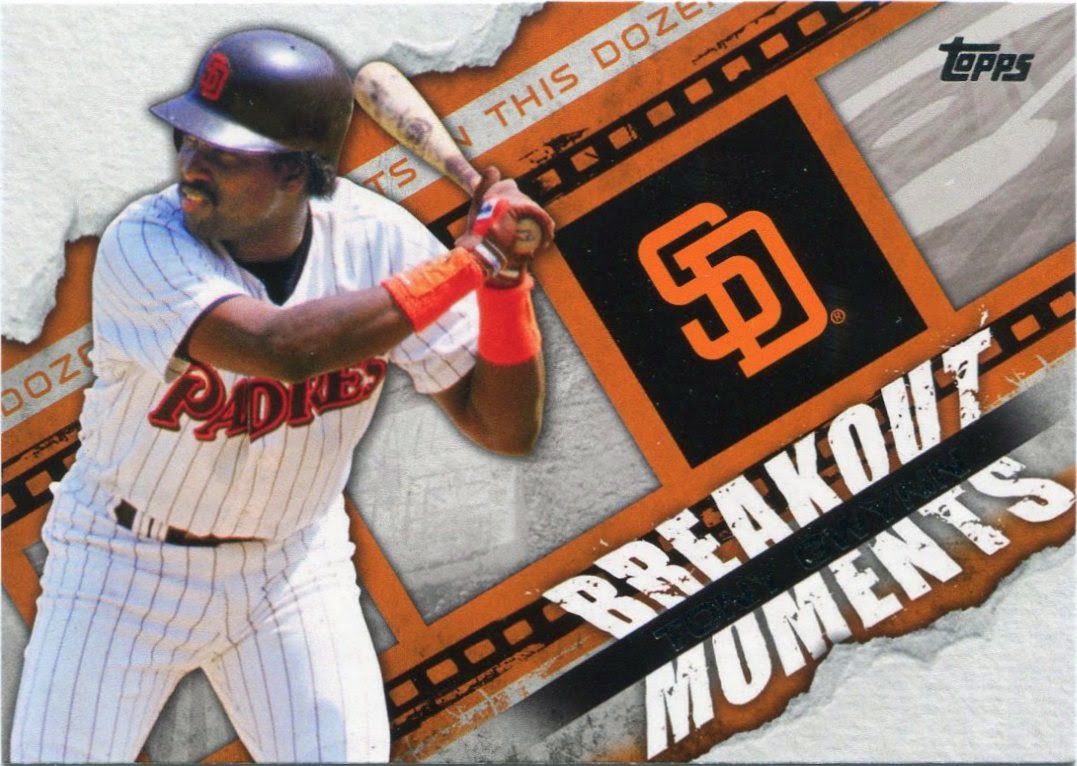 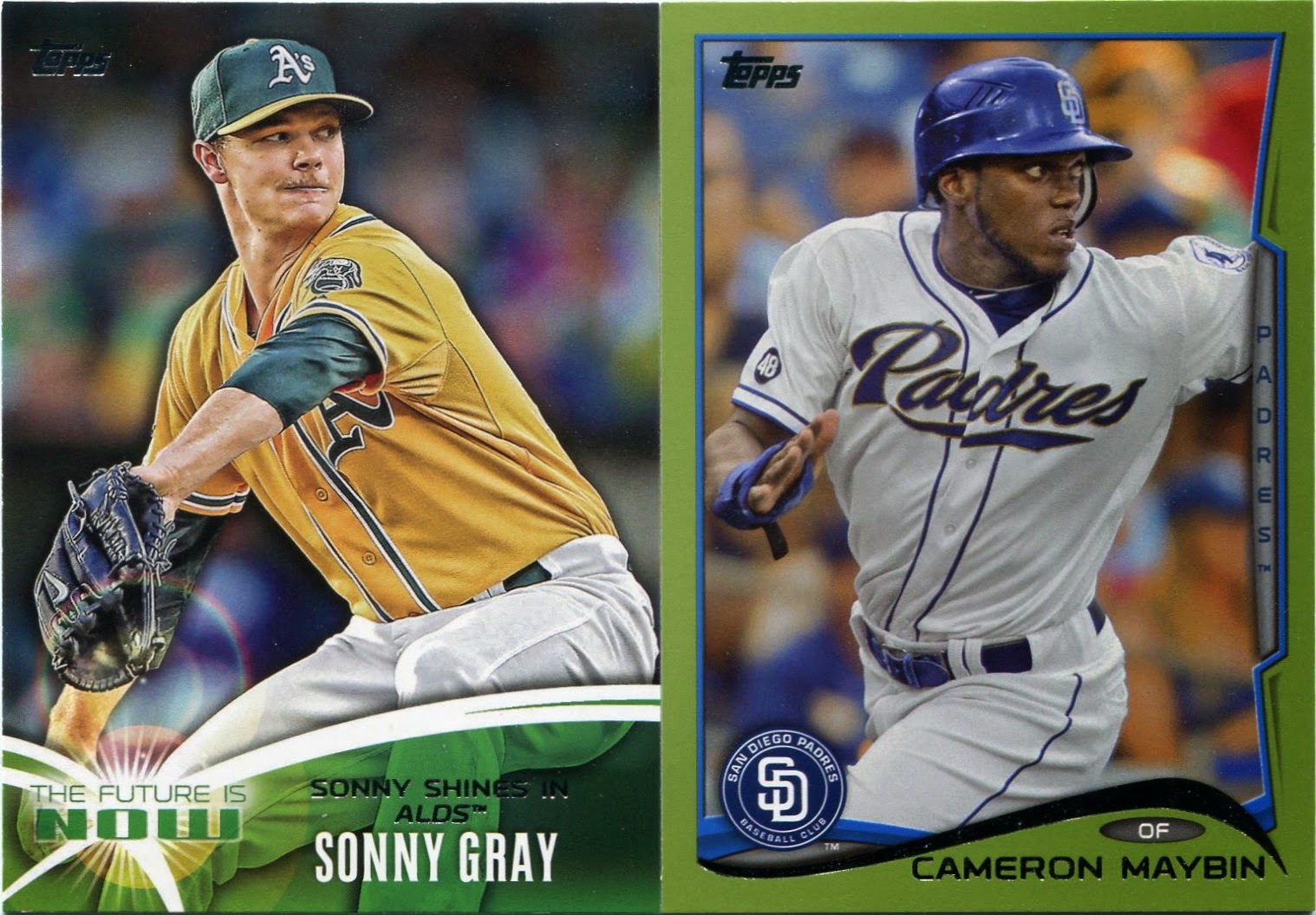 It's good to see Topps using it with a little more prominence lately. 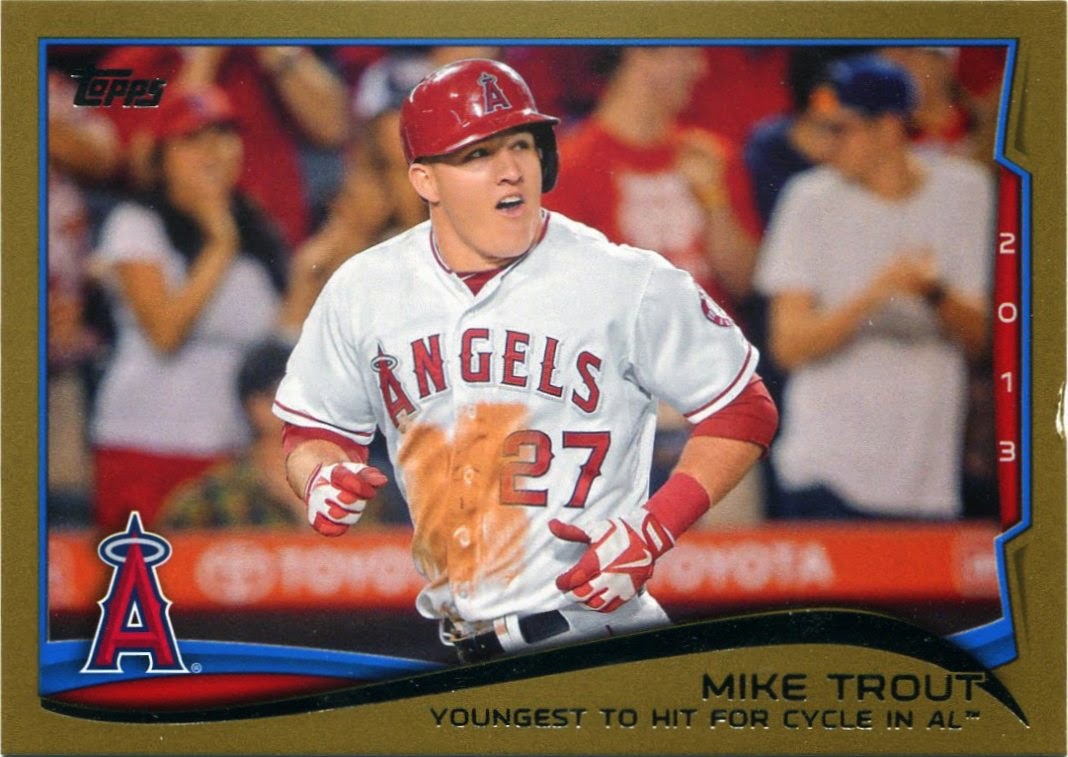 My favorite card from rack pack #2 wasn't much of a contest.

A gold parallel of the Golden Boy himself, Mike Trout. Though the card is a beauty, the battle didn't have quite as happy of an ending.

Again, you can notice a decent amount of chipping on the right edge of Mr. Trout here. Both of the rack packs I bought had warped cards.

Let me get this straight.

Blasters are a ripoff. Hanger boxes (at least from my experience) have collation issues. Now you're telling me I have to deal with warped edges in rack packs?

They were my one saving grace.

Maybe I'll just have to go back to buying loose packs.

I've never worked retail, so I don't want to step on anyone's shoes here. Still, I think it's obvious that someone at the local Target isn't doing their job. I hope that changes.

I'll have to abandon rack packs all together otherwise.

Pack searchers? Don't they try to fan the cards a bit looking for a relic? That could easily cause that kind of damage if they're all in the same spot on the card.

Not to be a correcting jerk, but since you're into such details I thought you'd like to know that that Cardinals uniform isn't a throwback; it's their (fauxback-ish) home alternate. Still looks weird to me seeing the city name on a white uniform.

I think there may be a problem with quality control over at tops. I've picked up a couple of blasters, rack packs, and loose packs and they seemingly have all had some issues. Everything in one of my blasters had dinged corners, and my rack packs displayed the same problems you pointed out. I guess I try my hobby shop to see if there are any problems over there.

That damage could be caused by pack searchers, who push the base cards out of the way to try to feel the edge of an autograph sticker with their thumbnail. At least my local pack searcher is nice enough to turn all the packs sideways in the boxes (or just leave the packs in stacks all over the card aisle) so I know which stuff to avoid. I hate that guy!

Uhhh The last card of Trout should have the -1 too for the funny face.
Seeing a Bumgarner card where he looks odd is difficult (because he's sooooooo cute!) but Topps is making a terrific effort...
I still have to buy cards from this year..It's difficult to get hold of packs nowadays.
This year inserts sets are not that good IMO. They are running out of ideas and there is not much of a opposition to gives us other options.