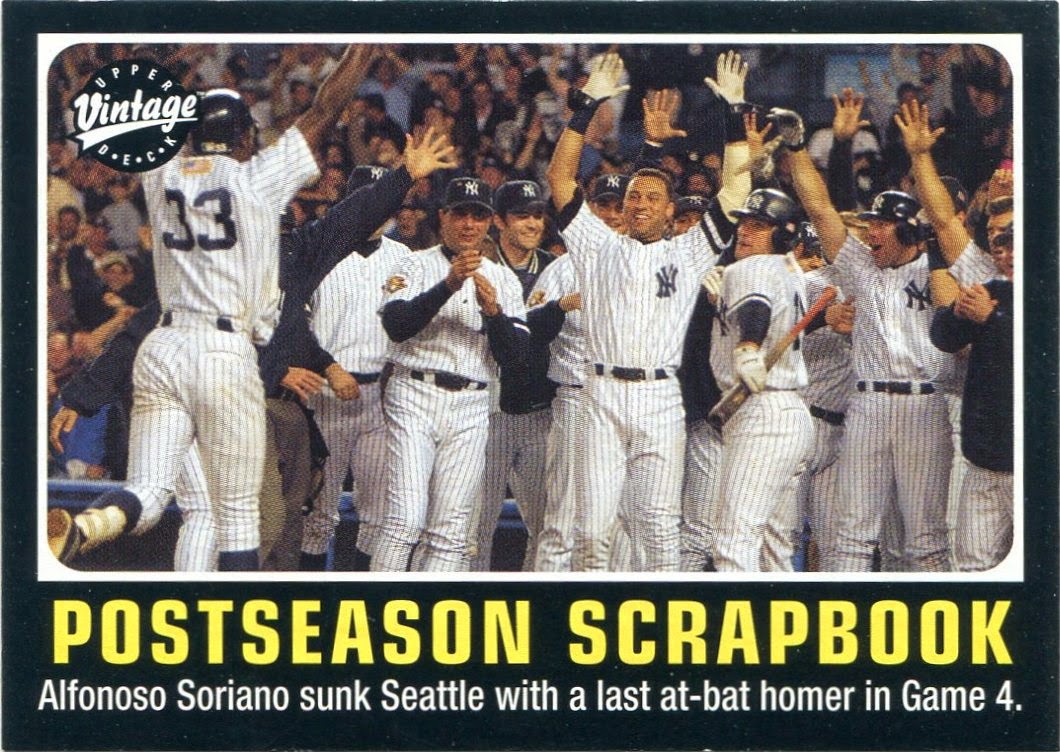 In case you weren't listening, I recapped Part 1 of my latest Dude-approved Just Commons order a couple days ago.

Between 2015 Topps, mini-collections, and Fleer Tradition, you could actually draw a fairly straight line between the cards I showed in that post. Which, as you know, isn't the way I usually do things around here.

Well, buckle up, because I'll be getting back to my roots in the second and final part of this order. In true dime box fashion, I actually discovered the card you see above by complete accident. I stumbled upon it thanks to a Jorge Posada-related mistake I made not too long ago.

As usual, Jeets is the first one to greet his Yankee teammate at home. 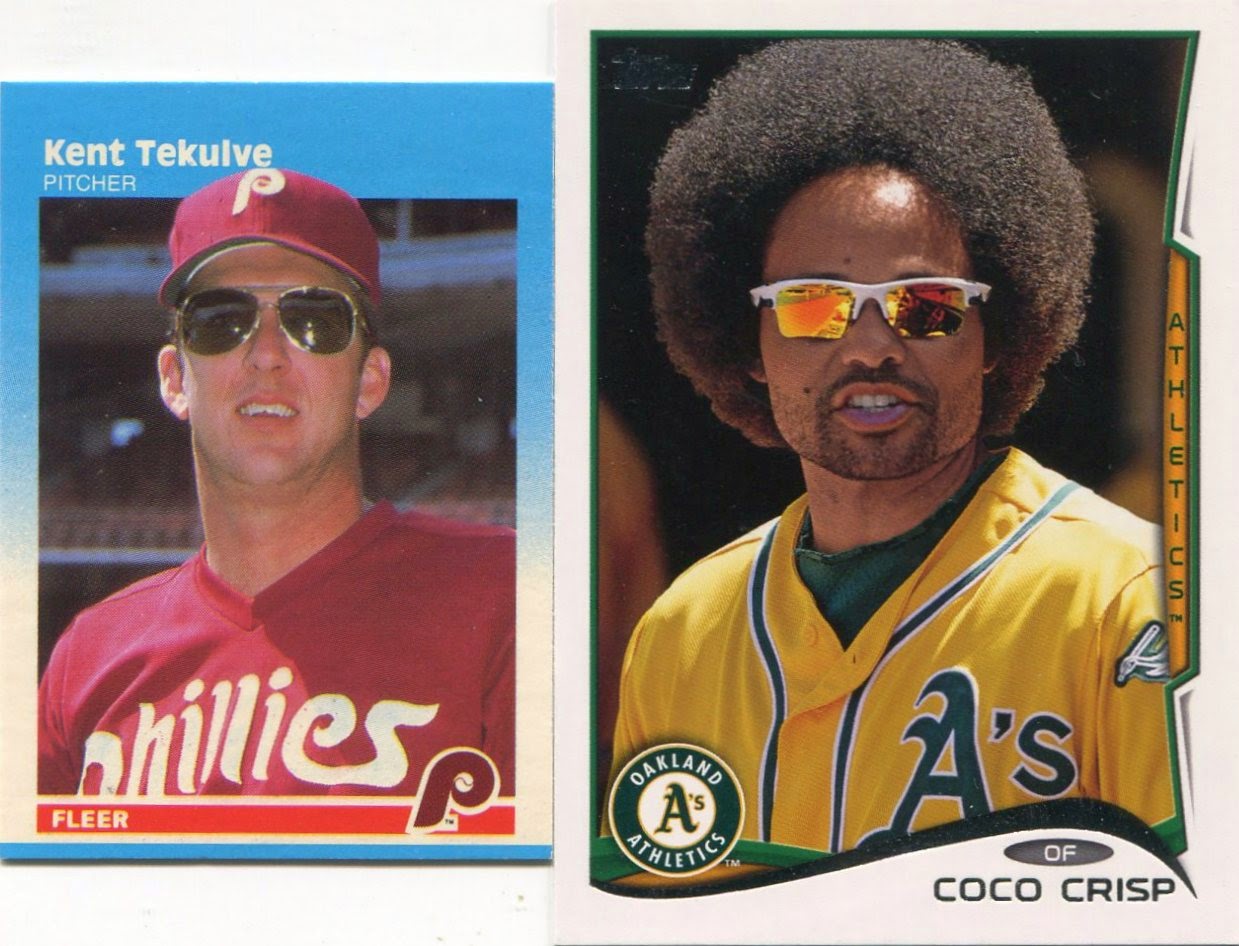 Minis of all shapes and sizes.

The Coco was the only Topps Mini I included in this order, and I think you know why. And, although I have a tendency to shy away from late '80s Fleer minis, I can't pass up my main man Teke.

Especially for just a dime. 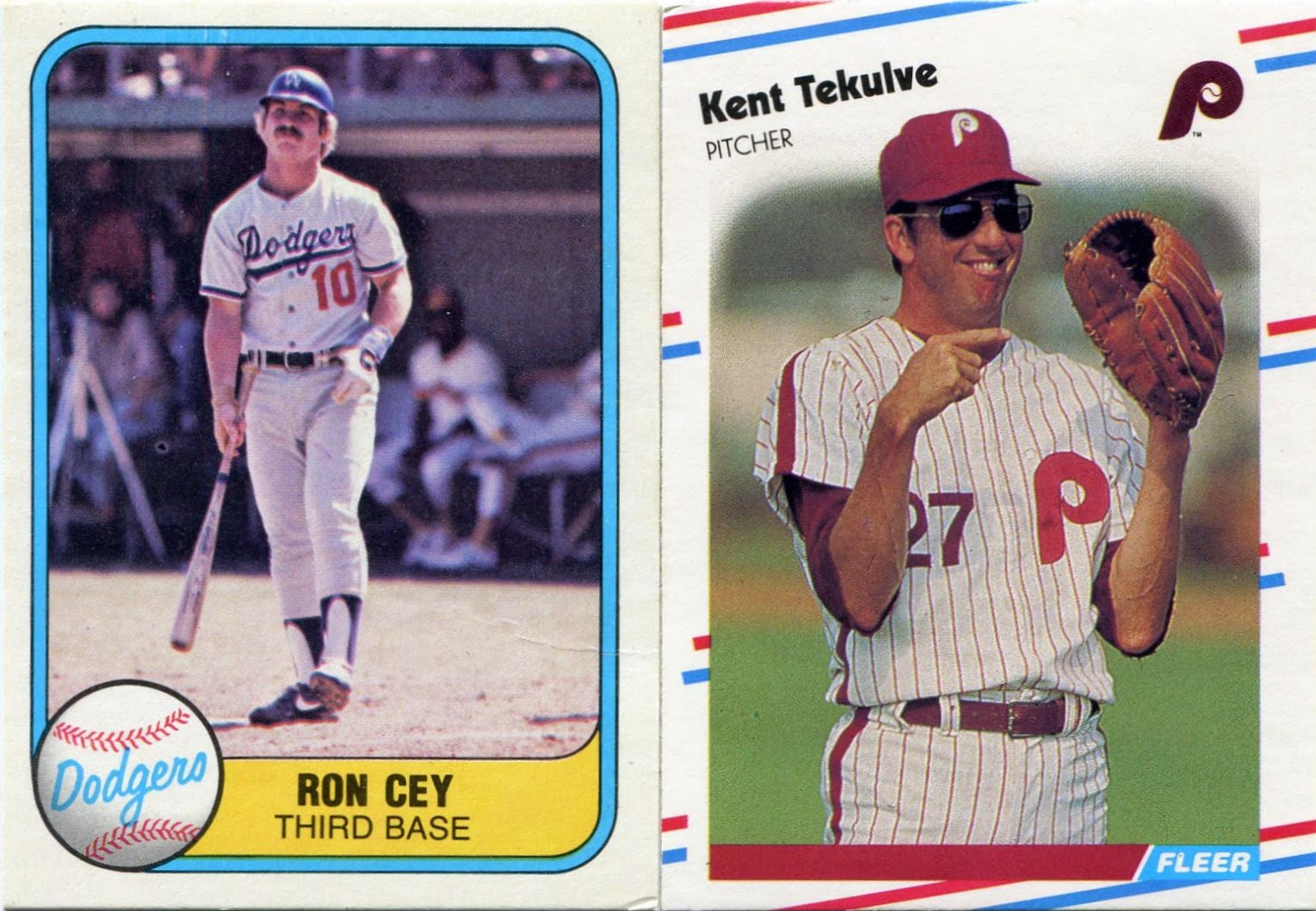 There he is again, in perhaps the most "Teke" card ever made.

Don't ask me how, but I'd somehow never gotten my hands on a copy of Tekulve's 1988 Fleer issue. I was a little embarrassed about putting it on my Dime Box Dozen list, to tell you the truth. Thankfully, Just Commons was there to pick up the slack.

The Cey was also a former Dime Box Dozen member. I went years thinking that I had all the '81 Fleer singles I needed, but I guess that wasn't the case. 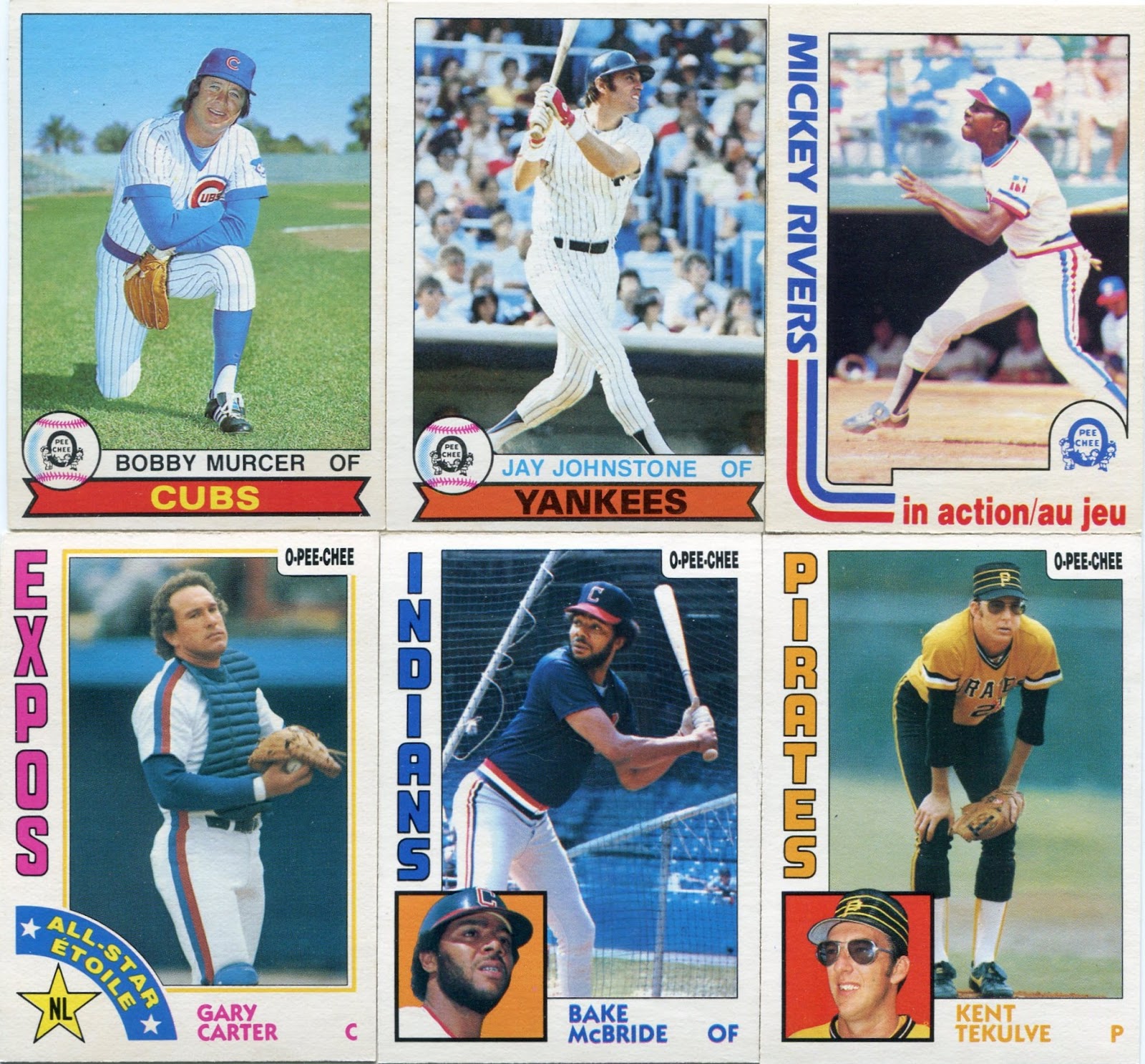 How 'bout one more from Teke?

If you're an O-Pee-Chee junkie like myself, then Just Commons is the place to go. They have the best selection of OPCs I've ever seen, bar none. It extends from the late '70s all the way up through the early '90s.

The Murcer and Johnstone were a quarter each, and the others were just a dime a pop. Seriously, Just Commons is O-Pee-Chee paradise.

I could've easily gone a little insane with the OPCs, but luckily I was able to control myself. 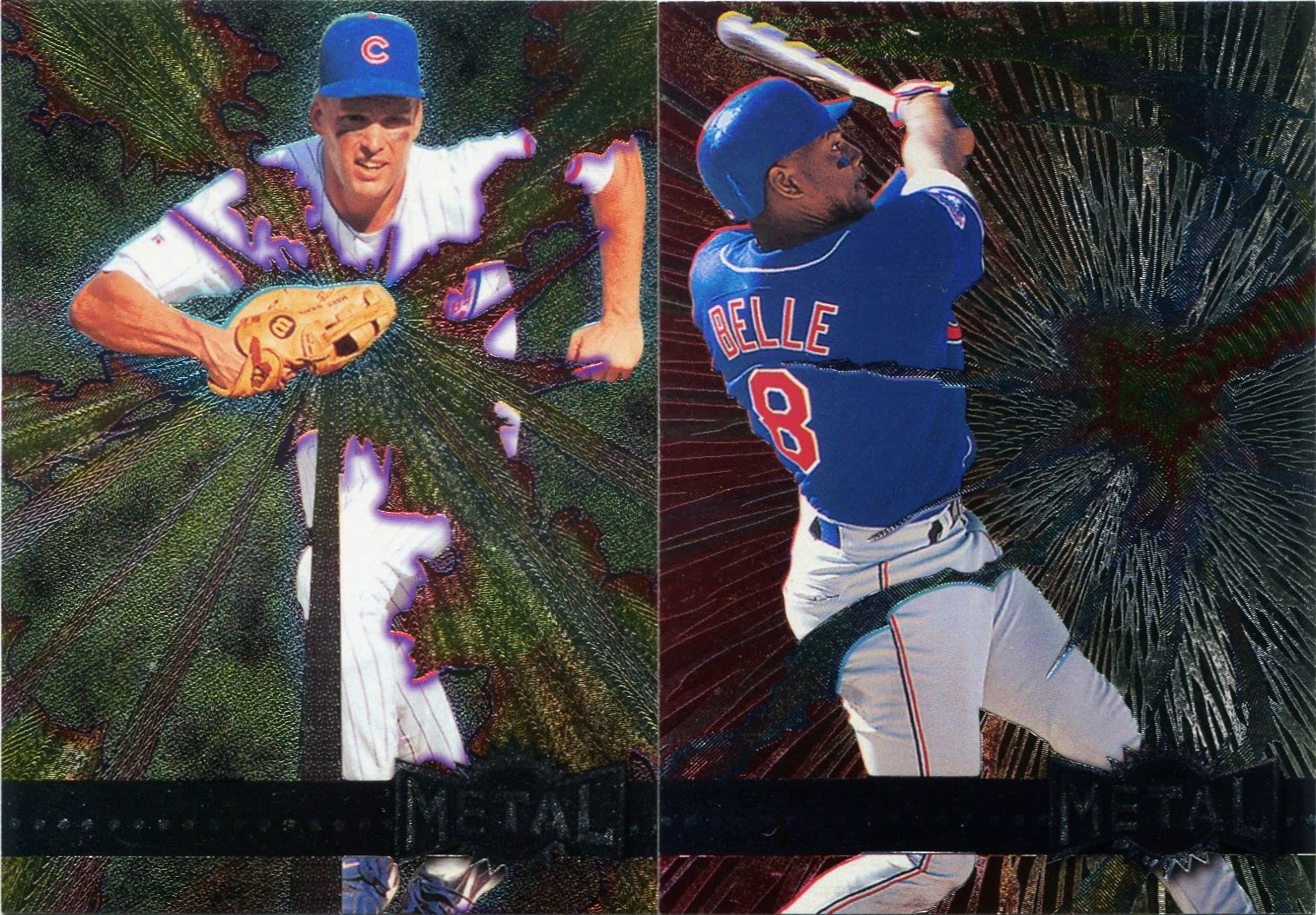 Metal Universe might be the wackiest baseball card set ever issued. I'm really not sure who the intended market was for these things. I mean, would kids really get a kick out of them? My ten-year-old self probably would've been horrified.

With the possible exception of 1995 Fleer, these are about as '90s as it gets. I hope to open a box of these puppies one day, if I can find one cheap enough.

Trust me, the scans don't do them justice. 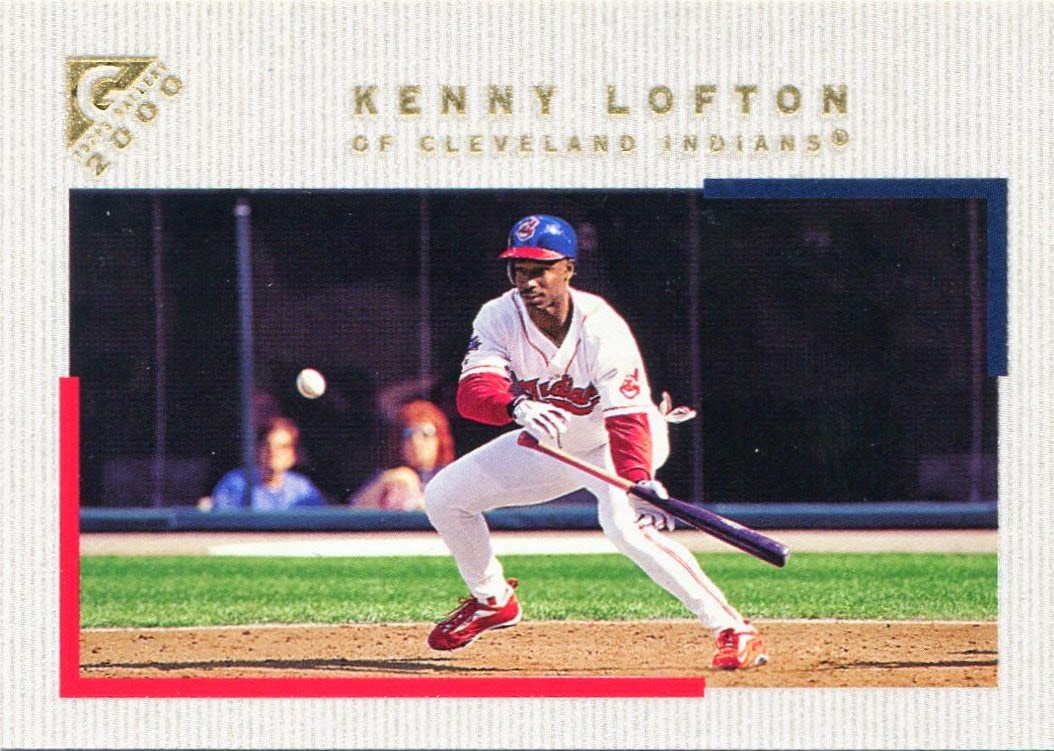 Although Topps Gallery was a big part of a past Just Commons order, a few gems managed to slip through the cracks.

I own a couple hundred Kenny Lofton cards, but this one is right up near the top of the list. 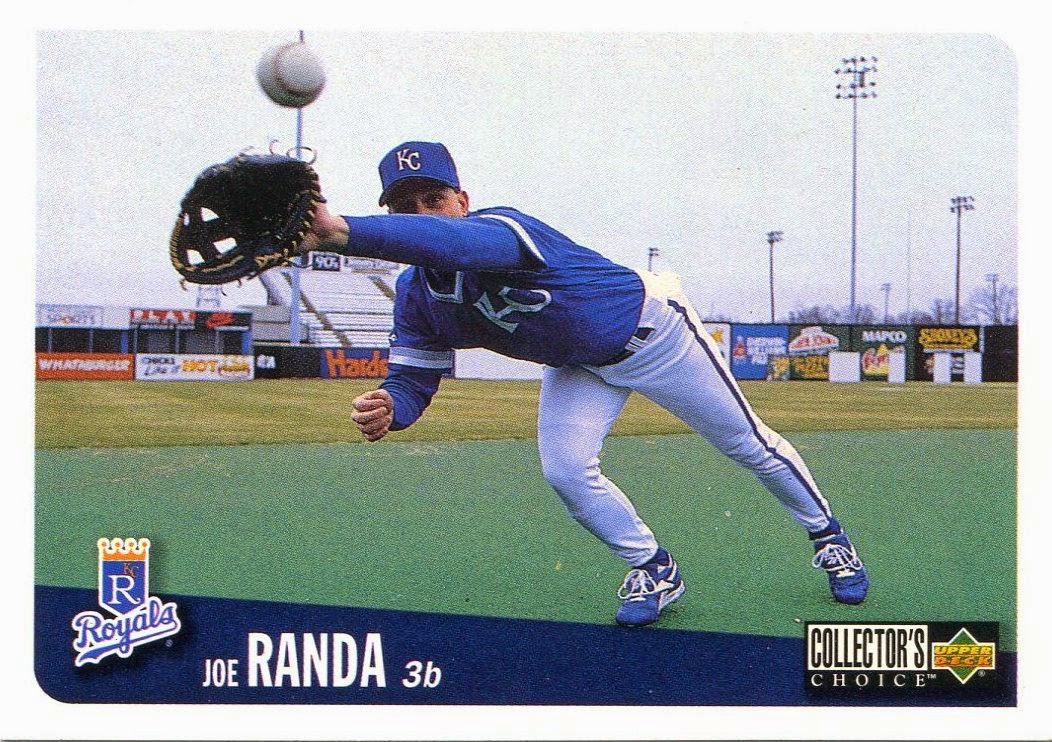 Even though Collector's Choice only lasted five years, its legacy live on in history.

I always seem to slip in at least a handful into every passing Just Commons order. To me, the brand captures a lot of what's missing from today's hobby...but that's another topic for another post.

In the meantime, I'll just be marveling over the greatness of Joe Randa. 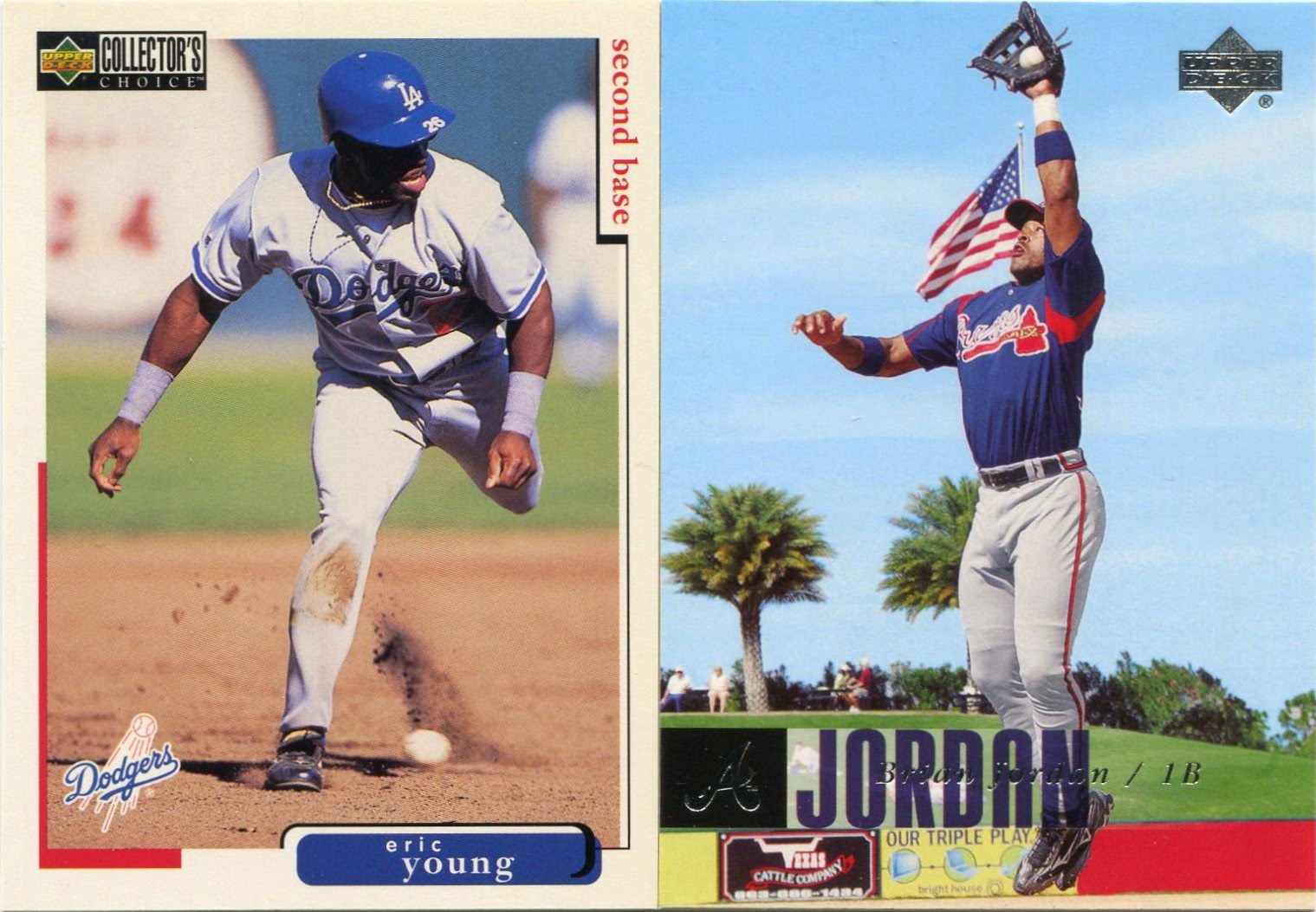 You just couldn't stay away, could you, Collector's Choice?

It's hard to tell for certain, but that ball certainly looks to have plunked Eric Young. Ball's dead, runner's out.

The Brian Jordan is another great card from the never-ending 2006 Upper Deck checklist. 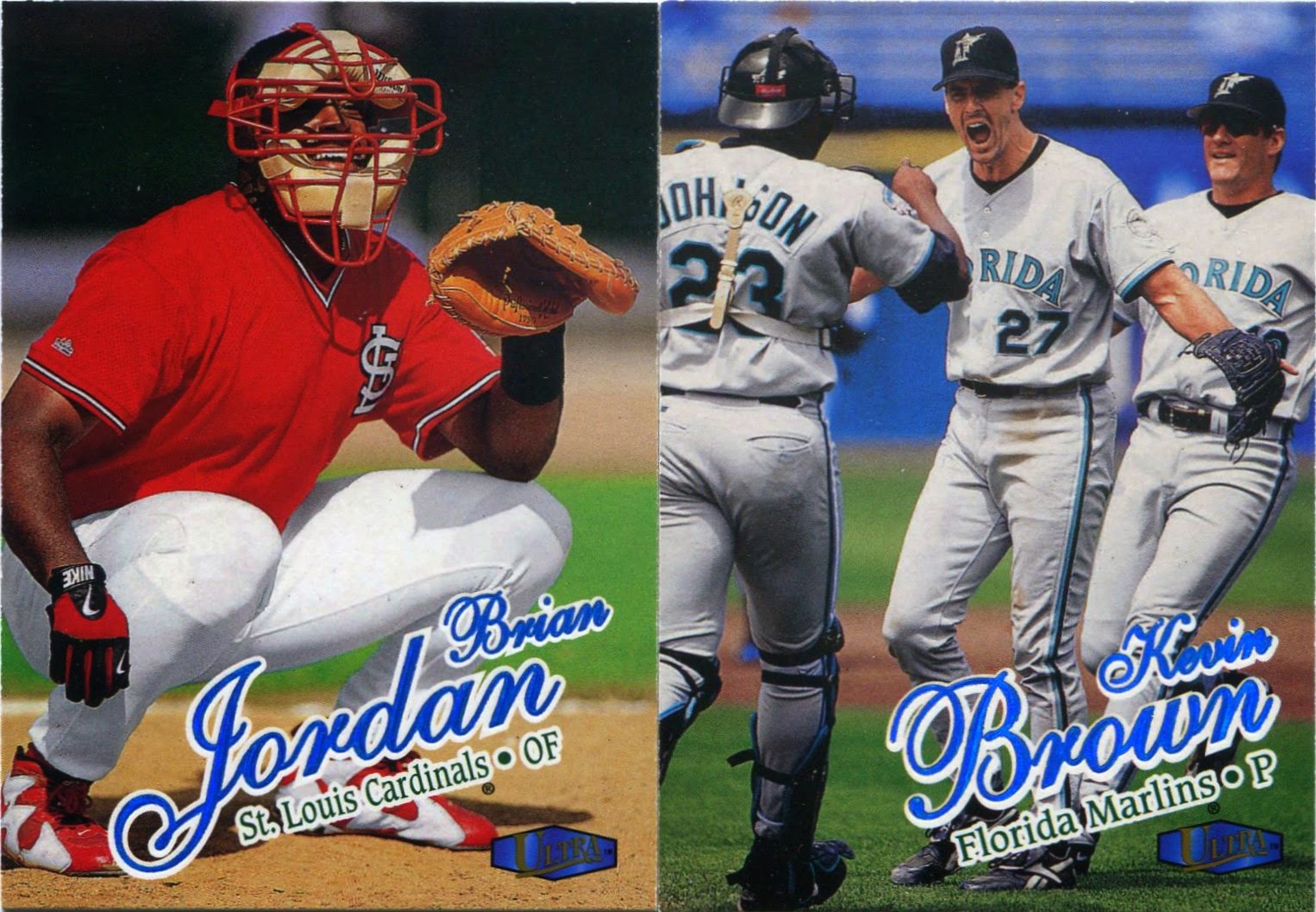 Mr. Jordan makes another appearance in this Ultra-specific pairing.

The Ultra post I wrote a couple weeks ago inspired me to track down a few more diamonds in the rough from the forgotten brand. That's Brian Jordan in catcher's gear, despite the fact that he never played an inning of professional baseball as a backstop.

The Brown looks to be a terrific shot from the aftermath of his 1997 no-hitter. It set me back a whole quarter. 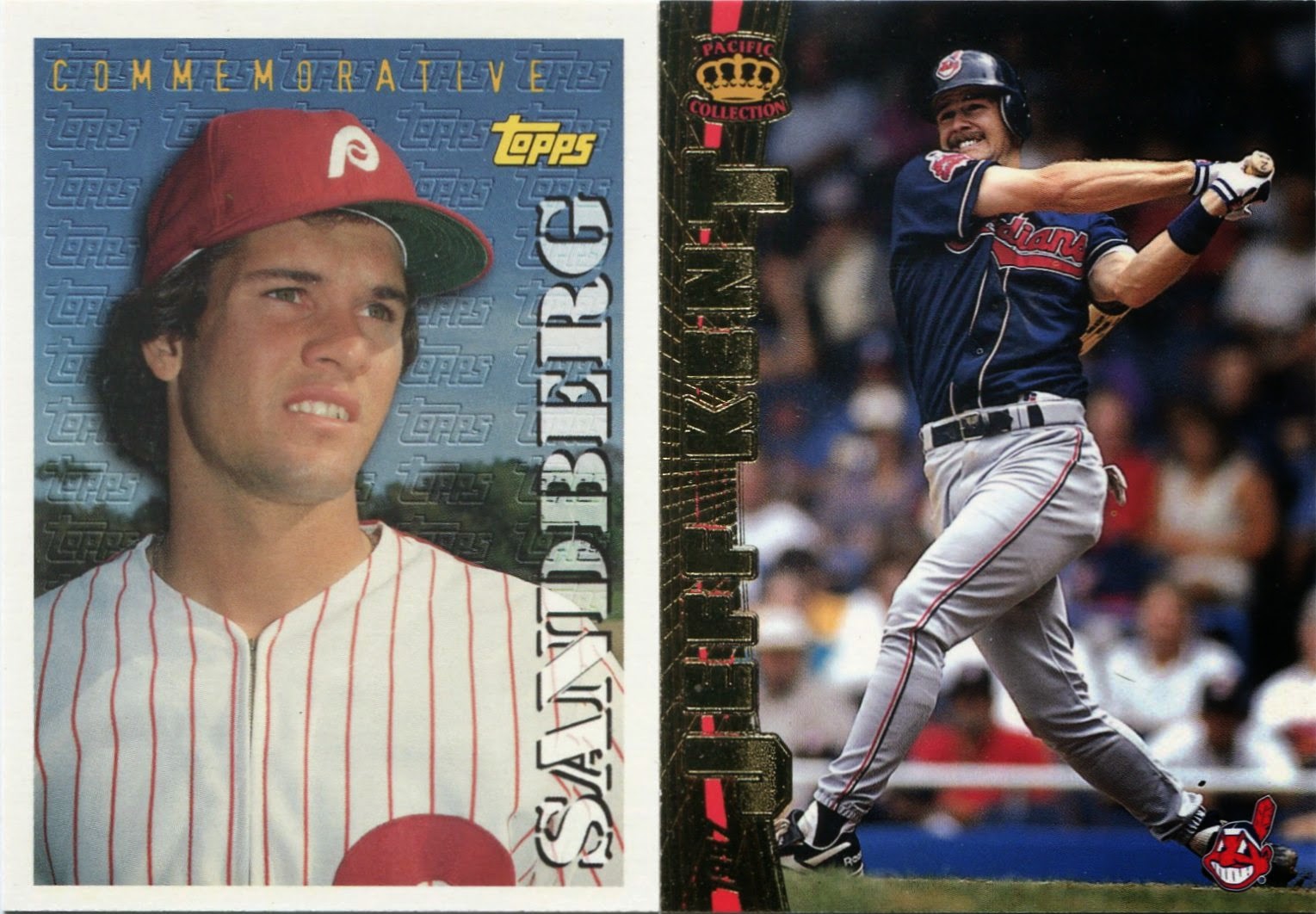 Besides the Jeff Bridges card I showed in Part 1, the Sandberg was my most expensive buy from this order.

At 54 cents, it was still a bargain for a rare card of Ryno as a Phillie. Still, I couldn't help but feel a little regret, given that Jeff and I found about ten copies of it tucked into those nickel boxes from a couple weeks ago.

While the Ryno was the most notable, it wasn't the only "short term stop" I added to my collection. That Pacific card is just my second of Jeff Kent as an Indian. He spent a whopping 39 games in Cleveland in 1996. 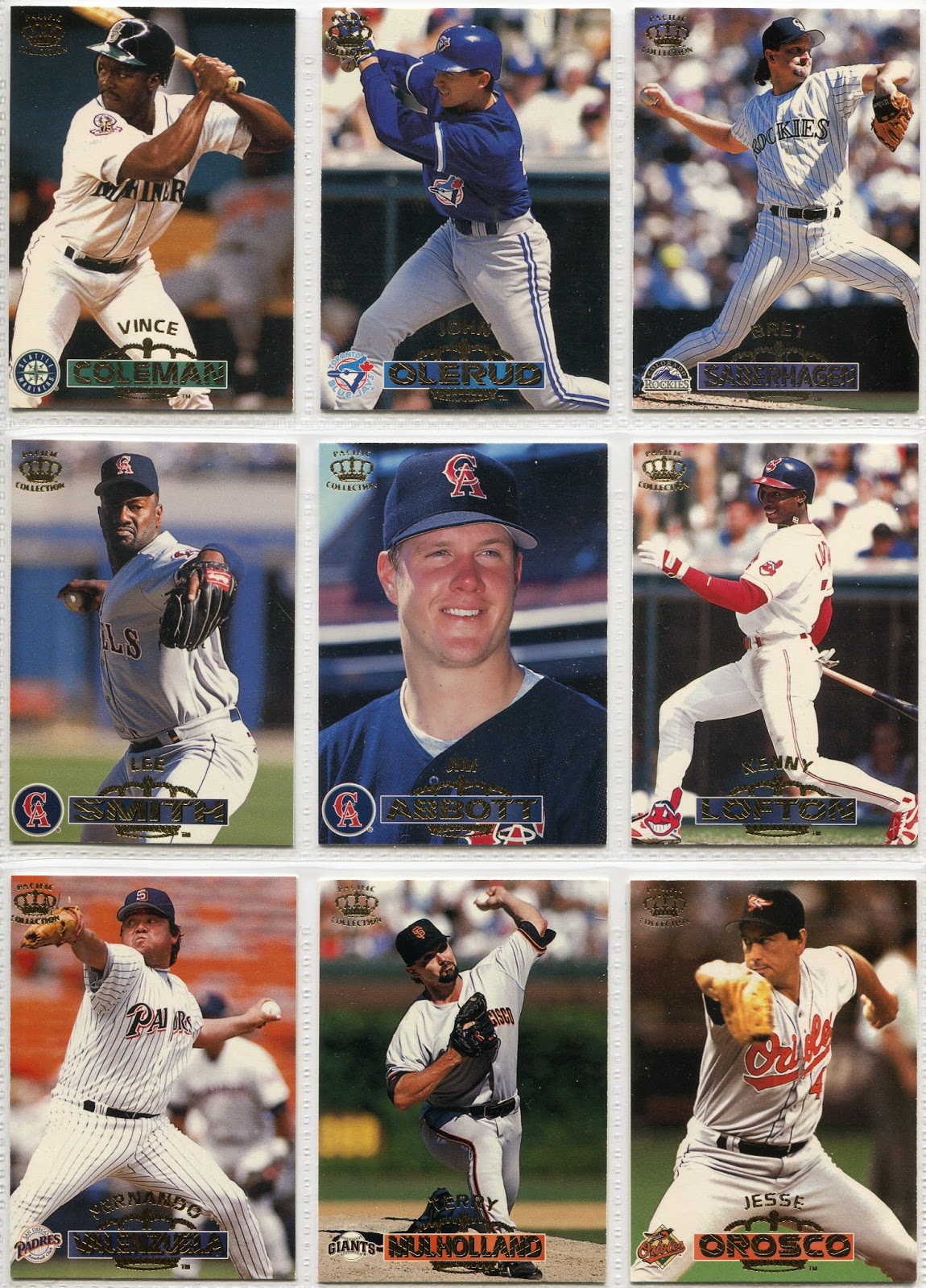 I can tell you from first-hand experience that anything Pacific-related is darn near impossible to find at card shows. Nickel boxes, dime boxes, quarter boxes, doesn't matter. Pacific is pretty much lost to history as far as most vendors are concerned.

A brand like Pacific doesn't deserve to get left out in the dark. 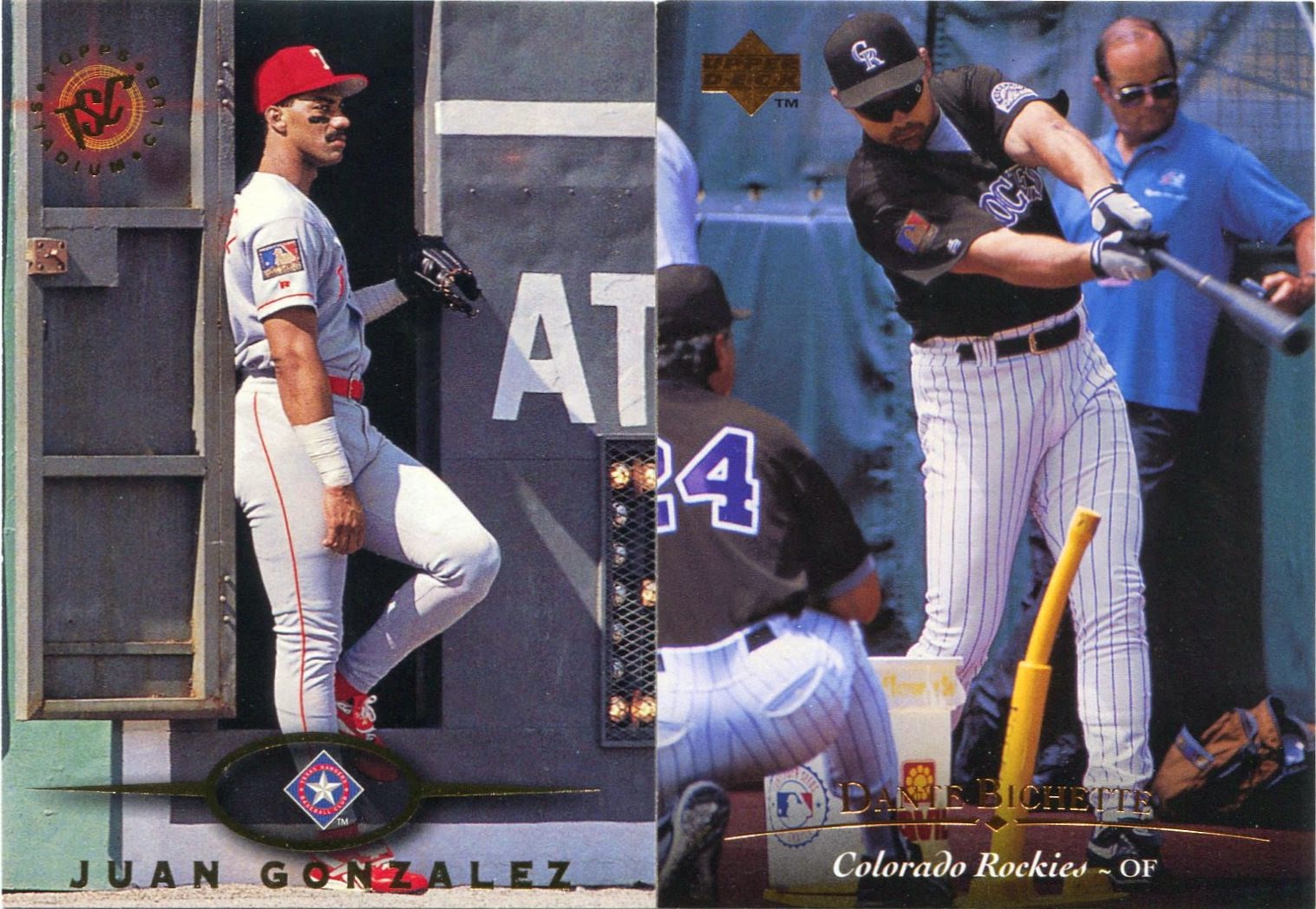 I can't possibly write a coherent transition from Pacific to these two, so here you go.

You'll have to excuse Juan Gonzalez while he has a Manny moment. And have a gander at Dante Bichette doing some tee work. (Don't think you can hide from me, balding guy in blue shirt checking his cell phone.)

Let's see. O-Pee-Chee, Collector's Choice, Ultra, Pacific. Hmm. I get the feeling I missed something.

Can you help me out, Juan? 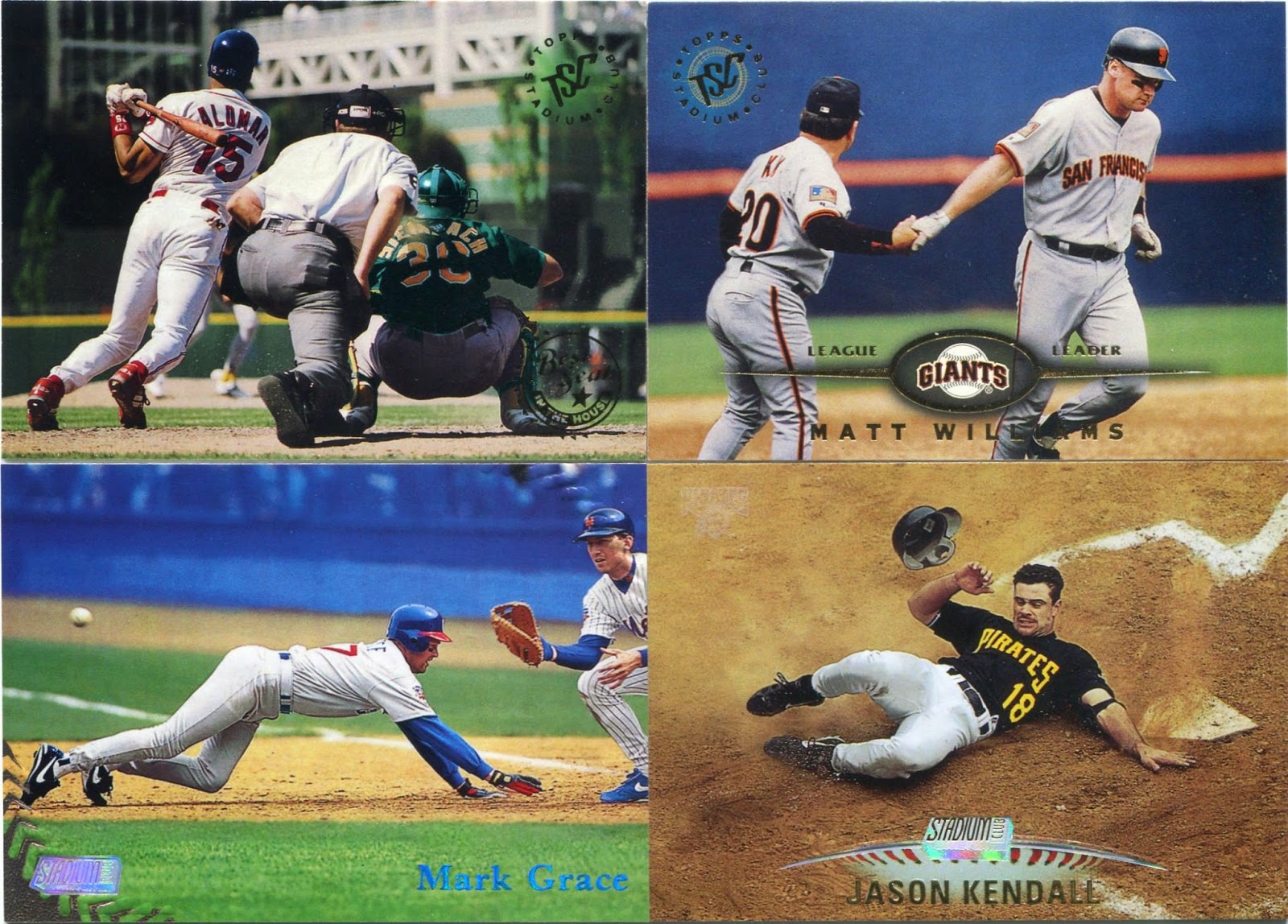 Stadium Club. Another staple of the Just Commons inventory.

I don't think I need to preach about Stadium Club anymore. I think most of you have pretty much heard the sermon by now.

Besides awesome photography (as usual), this quartet has a few fine cameos as well. That's Terry Steinbach behind the plate on that Sandy Alomar card. Steinbach's spectacular 1999 Fleer Tradition single made an appearance in Part 1 of this mini-series.

The Williams features a cameo from the late "Wavin' Wendell" Kim, and John Olerud gets some screen time on that Mark Grace. Two of my favorites on one card.

Jason Kendall's too cool for cameos, thank you very much. 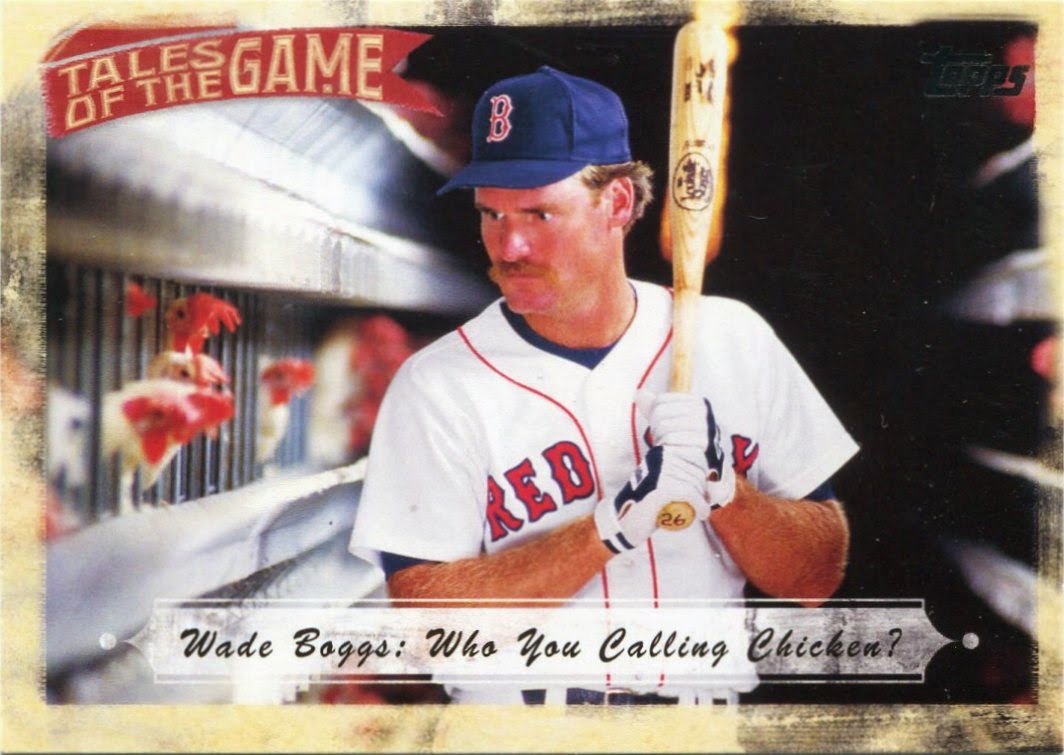 I guess it's fitting that such a crazy card would close out this wacky Just Commons order.

This photo would be awfully haunting out of context. As you might know, Wade Boggs was known for eating chicken before every ballgame during his storied career.

Even with the context, it's still pretty creepy.

At fifty cents, Mr. Boggs was one of the "high-dollar" buys of this huge 240-card purchase, my biggest Just Commons order to date.

A big thanks to my mom is in order, her generous and thoughtful gift certificate paid for most of this massive stack of cardboard. Now, if you'll excuse me, a long session of filing, sorting, and organizing awaits.

See what happens when you let me loose on Just Commons?

Do you see what happens?
Posted by Nick at 5:30 PM

More great cards, the Randa one is nice, but the Kendell card really stands out to me.

Thanks to your last post, I spent some time the other night adding cards to my cart, now I'll have to look for some more.

you know that Jordan (braves)had me, but I must admit that Cardinals one is pretty cool too!

You win! I'm convinced! I'll shop at Just Commons. I've perused the site, added to my cart and never checked out. The Kendall is super sweet. It IS Stadium Club.

Collector's Choice cards are so good!