2015 Topps Heritage: Beginning of the end 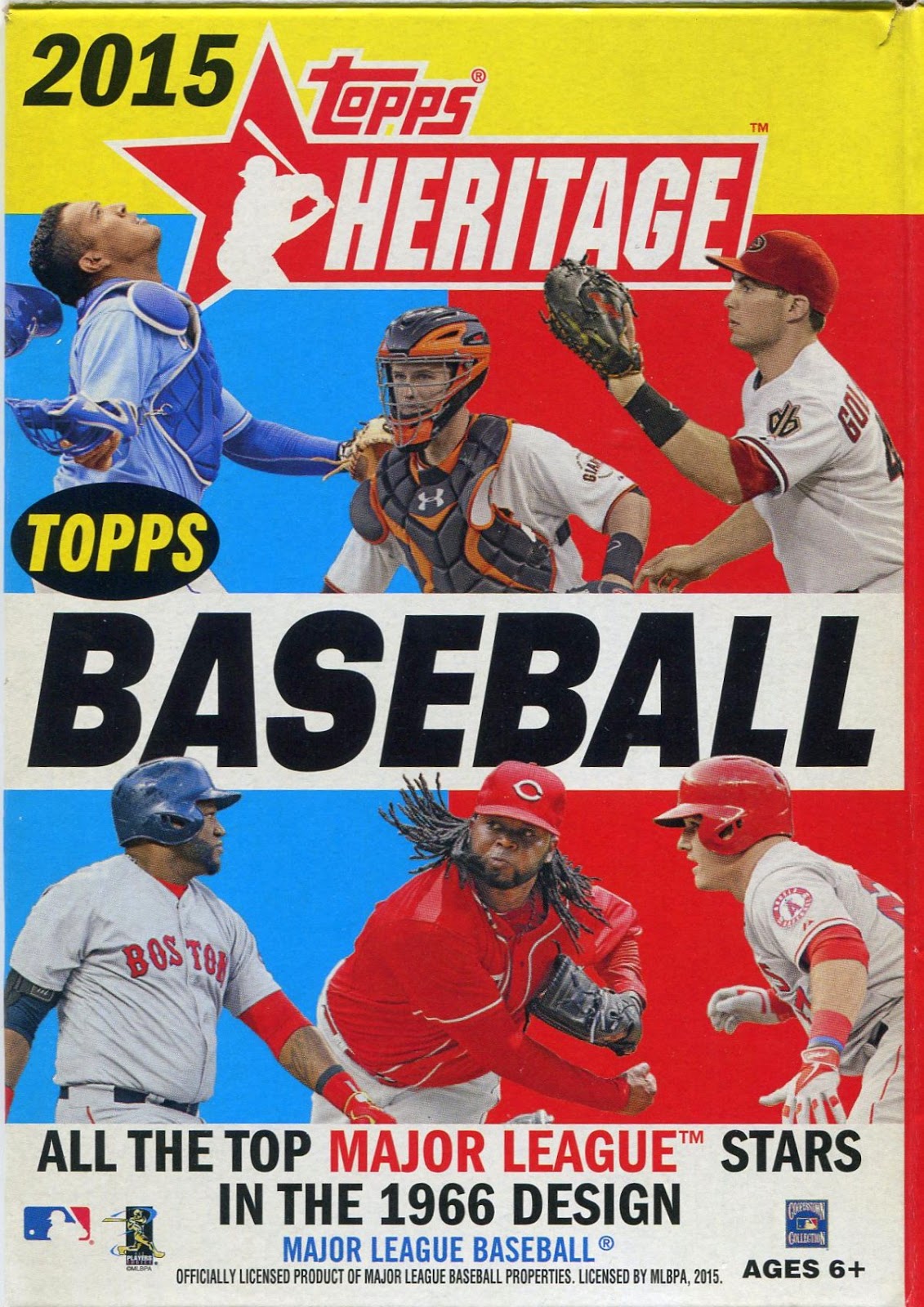 I don't think I need to explain much when it comes to Topps Heritage.

I always look forward to Heritage, no matter what the design. But I'd be lying if I said that this year's edition isn't hurt by the fact that 2014 Heritage was so terrific. Anything that honors my all-time favorite set is bound to be memorable.

Couple that with the fact that '66 Topps isn't one of my favorite designs, and, well, the cards are already stacked against 2015 Heritage before pack one. Sadly, this is the beginning of a Heritage snoozefest until at least 2020, as I'm not big on any of the Topps sets from 1966-70. I'll have to wait until 2020 Heritage for another design I really like.

Still, like I said, I have to get me some Heritage whenever a new edition hits the shelves. Dad and I picked up a couple 36-card hanger boxes last week during a trip to Target. 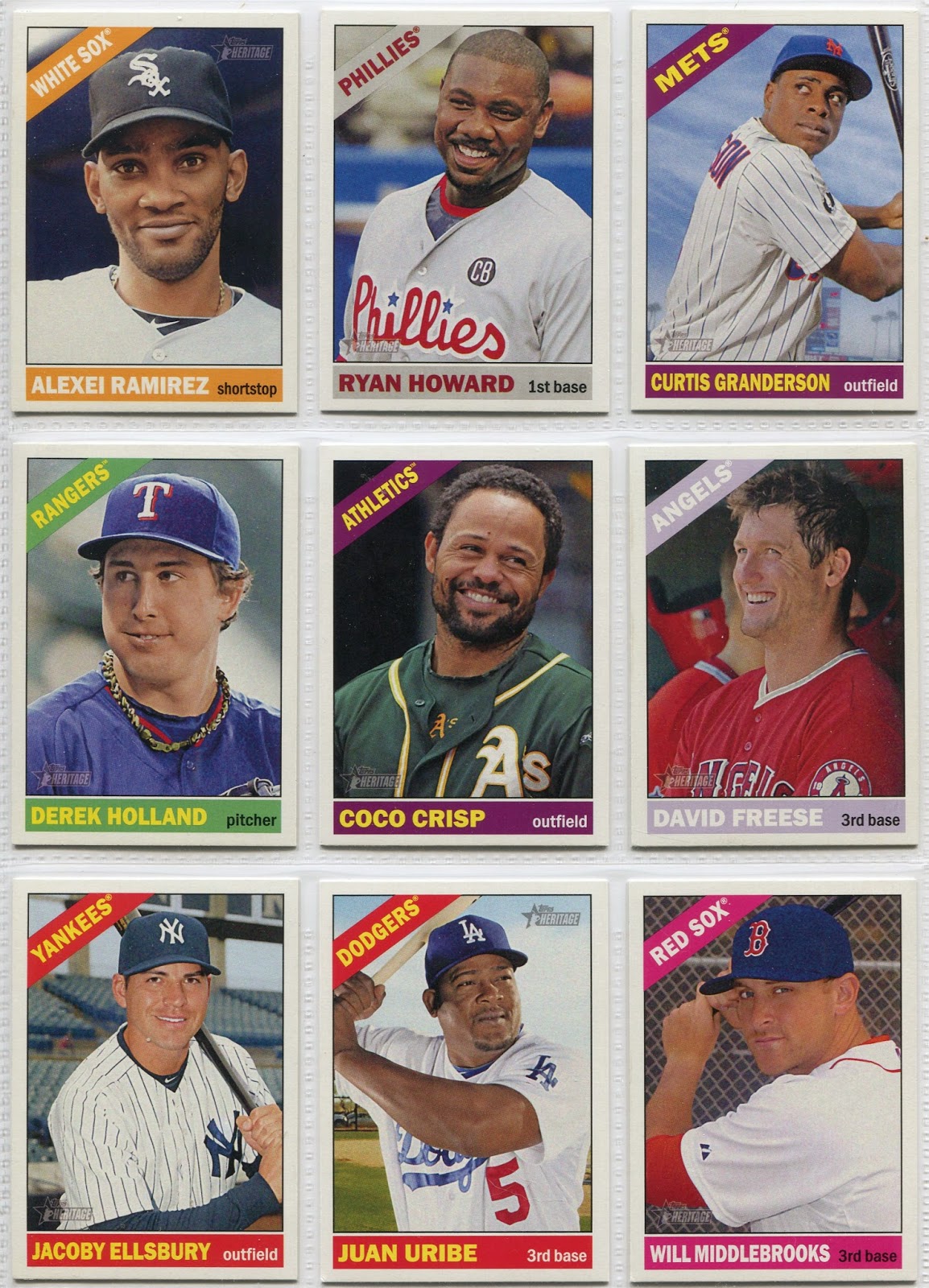 Again, Heritage is pretty consistent with the photos.

One thing I do like is the presence of authentic old-time posed shots, as seen with the Granderson and a few others on this page. You won't find those anywhere else but Heritage these days.

I also like the off-kilter color combos, like green and yellow for the Rangers. Those definitely stay true to the originals.

In the end, though, I really can't bring myself to get too excited over a design I'm not crazy about in the first place. That's not so much a knock against the people working at Topps here in 2015.

I mean, you can't blame a mediocre 49-year-old design on a current Topps employee, can you? 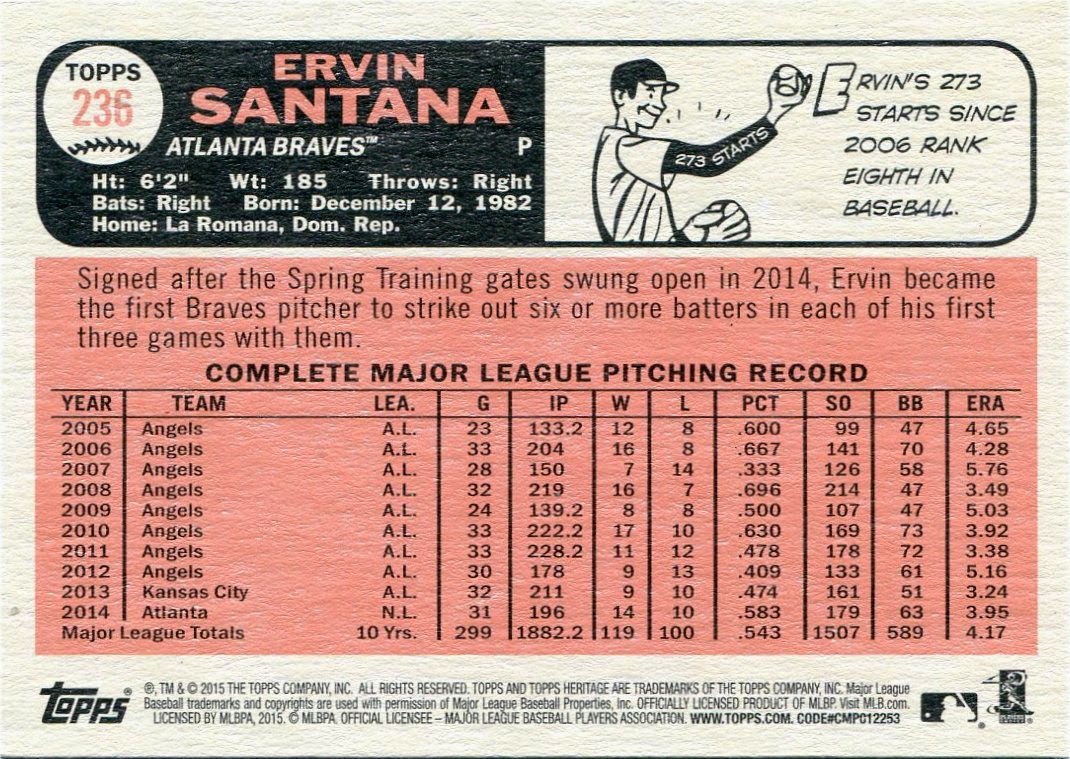 The backs remain one of my favorite things about Heritage.

I get the feeling that Topps doesn't think people care about the flip sides of cards anymore. And maybe that's true on the aggregate. But, despite what the hobby high rollers would have you believe, there are still people who want to see good backs.

Heritage harkens back to the days where the backs were every bit as important as the fronts. 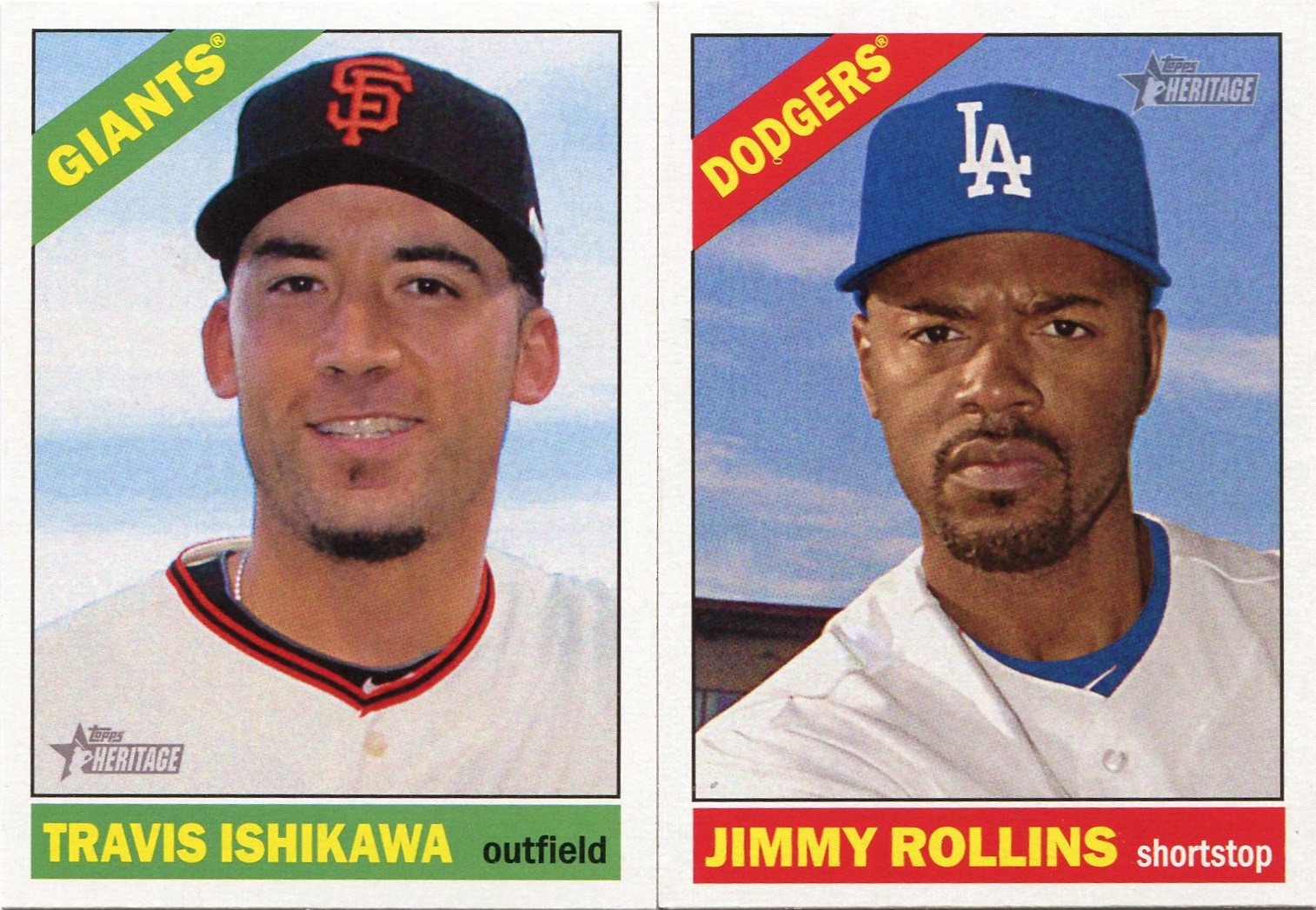 A few base cards in particular grabbed my eye from these hanger boxes.

Without his Bobby Thomson moment, there's no way a middling bench guy like Travis Ishikawa would've sniffed the 2015 Heritage checklist. It's good to see that his dinger is getting him some recognition around the cardboard universe.

Heritage is usually one of the first brands (if not the first) to print updated cards that reflect the offseason's trades/free agent signings. Even if they are blatant photoshop jobs, I still enjoy them.

But I'll never get used to the sight of Jimmy Rollins as a Dodger. 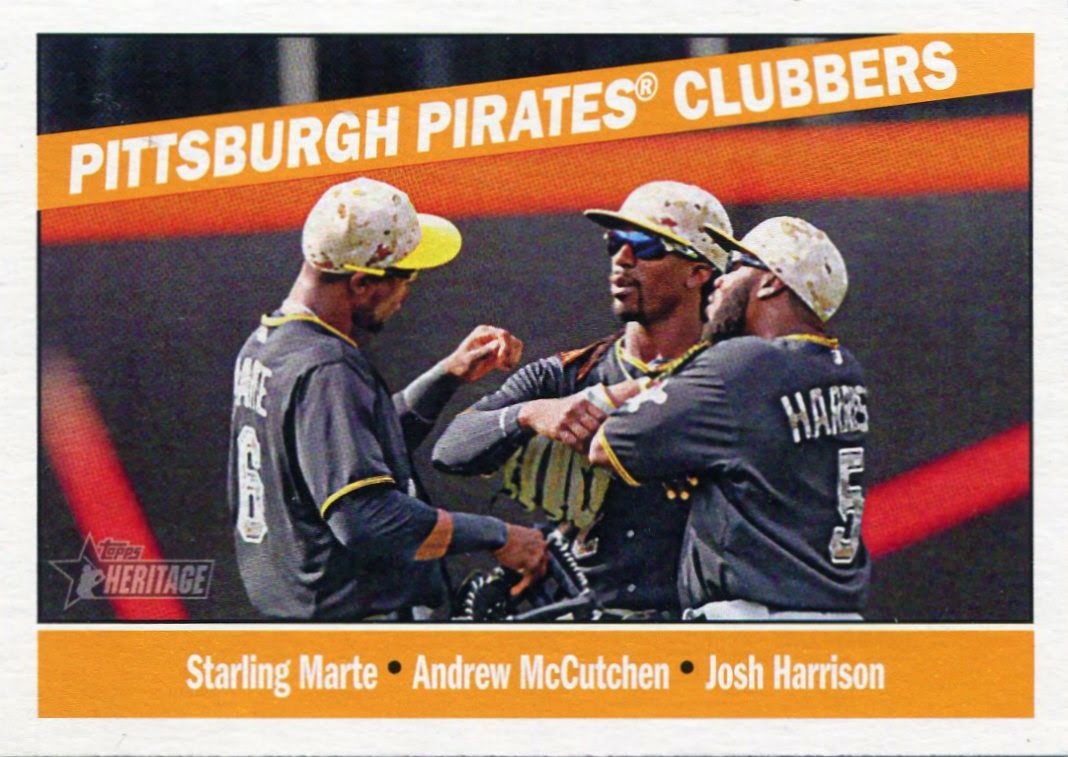 I ignored these Heritage "combo" cards for a long time, and I regret every minute of it.

These do a great job of honoring the originals (aside from the horridly huge trademark), and this Pirates trio is especially fantastic. 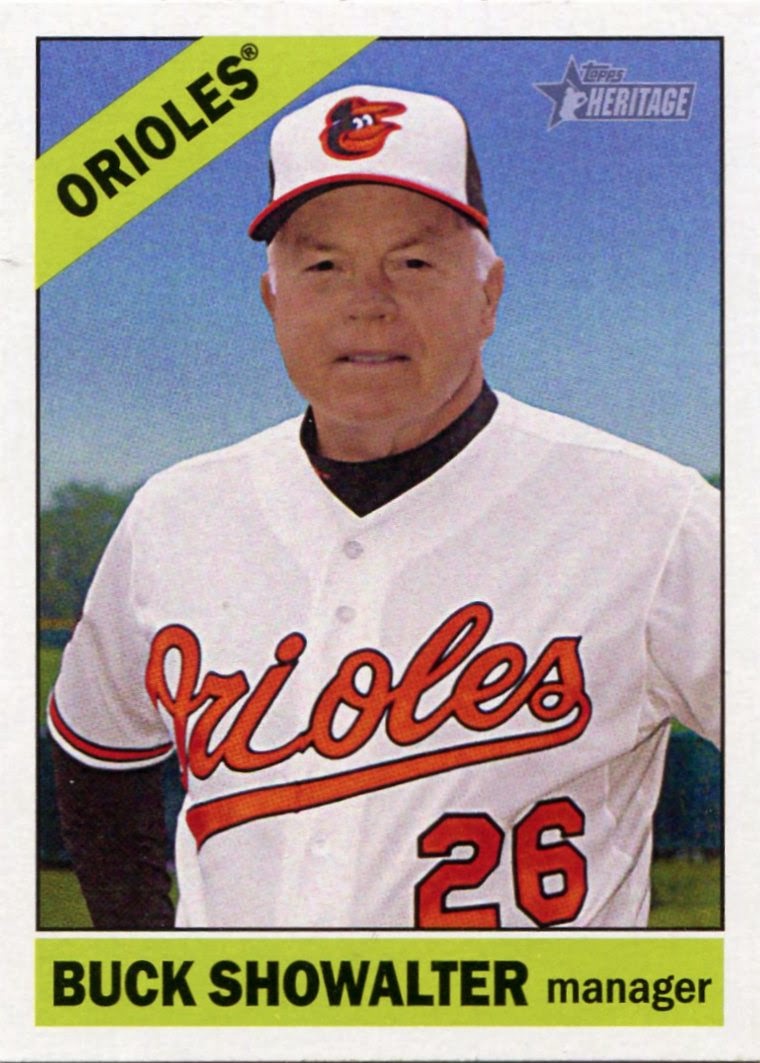 Heritage is the last hope for managers.

They're not in Flagship anymore, so this is the only time you'll see skippers like Buck Showalter in a Topps checklist.

That makes me sad, because manager cards rule. 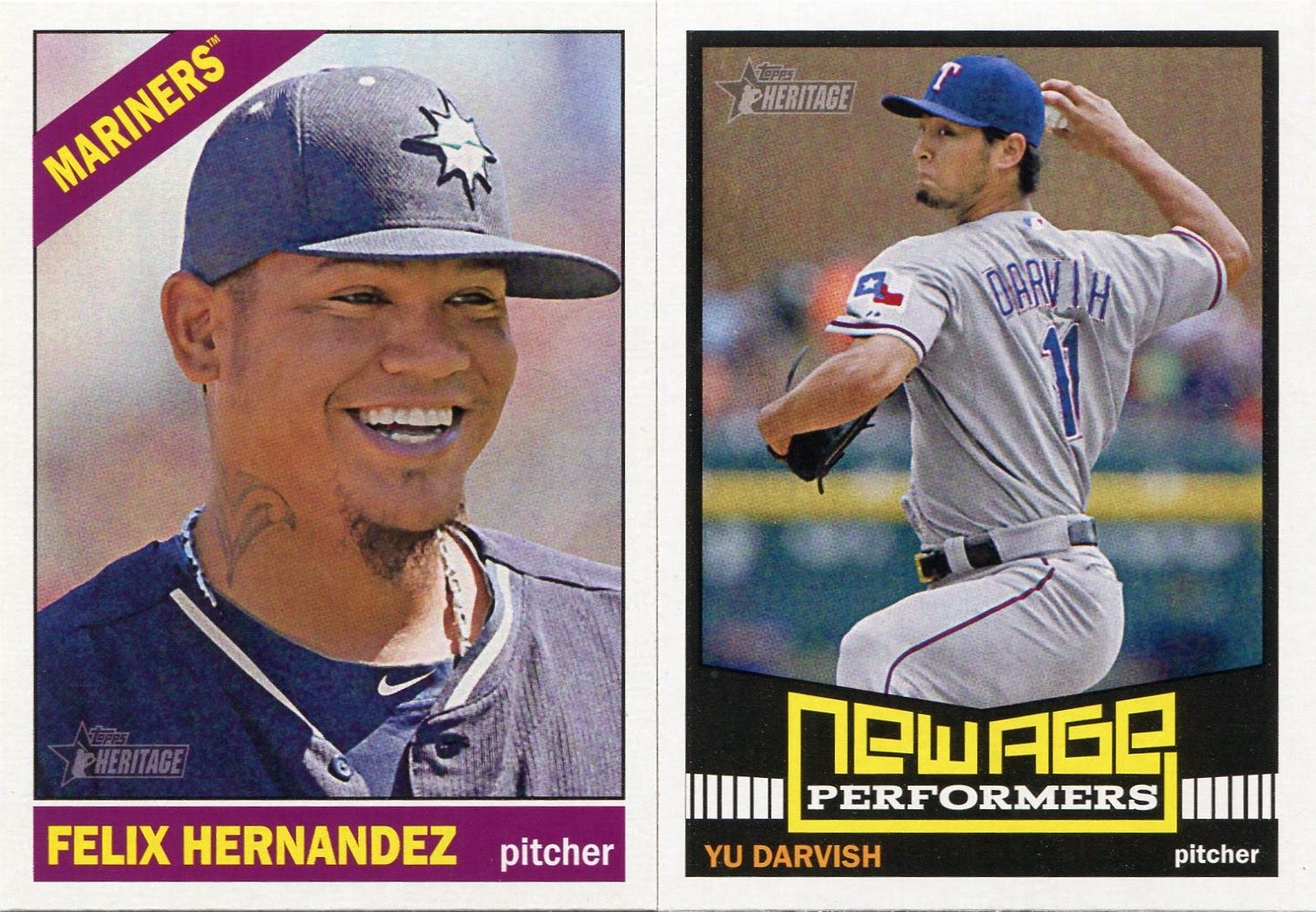 I'd love it if the Heritage brand was nothing but base cards.

I mean, that would be the biggest tribute to the originals, wouldn't it? (That, and making the packs a nickel each like they were in '66.)

But, as we all know, that ain't gonna happen. Topps has to turn a profit somehow. Instead, we get tough-to-find short-prints and New Age Performers and error variation SPs and color swap SPs and action SPs and a bunch of other gimmicks.

None of those sound very authentic to me. 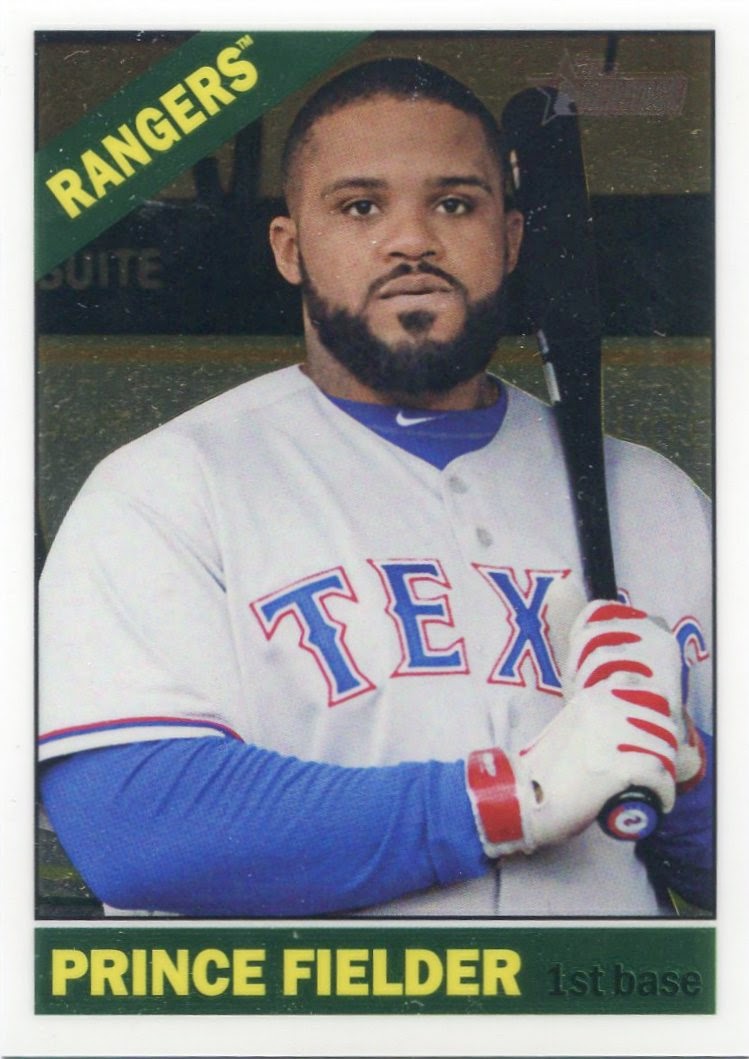 Neither do chrome parallels.

I just don't get these. Chrome wasn't a glimmer in anyone's eye in 1966. So what the heck are they doing in Heritage? It doesn't seem like anyone froths at the mouths for these, so I don't get why Topps brought them back in 2015 after a year-long hiatus.

Prince here is numbered to 999 copies, and, although he's all chromey, I really don't see what any of this has to do with 1966 Topps. 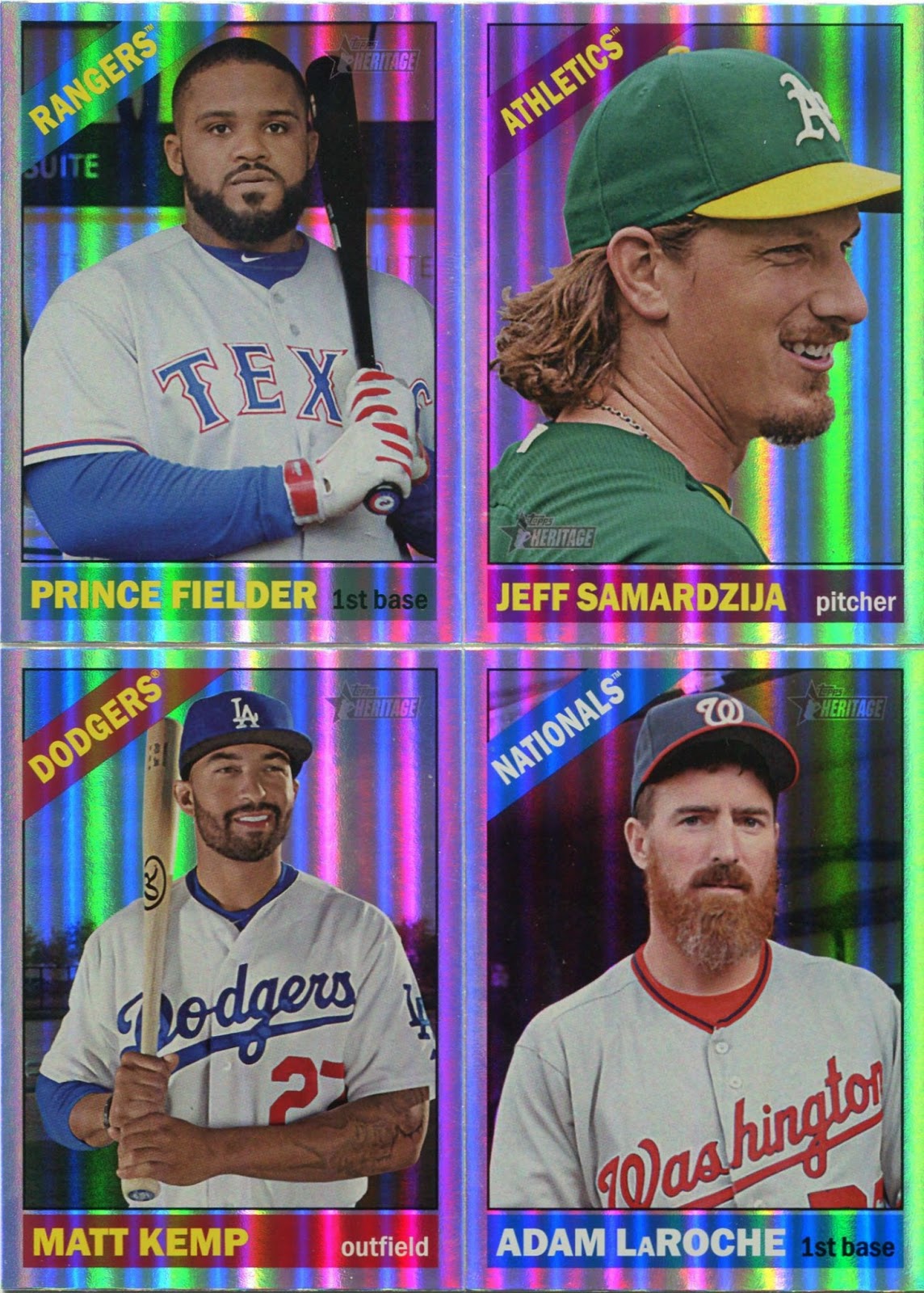 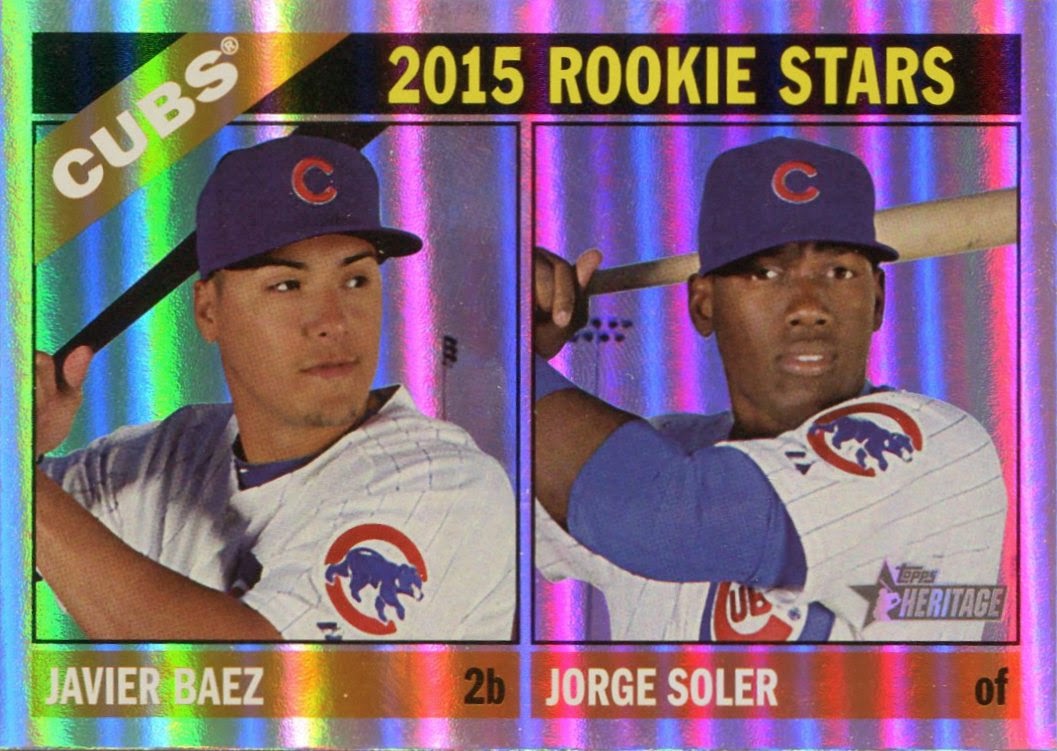 But at least they're shiny.

From what I can gather, these parallels are new to 2015 Heritage and exclusive to retail hanger boxes. They don't pancake as much as the chromes and aren't numbered. I think each of my hangers contained five of these. (Stop following me, Prince!)

It's hard to dislike anything shiny, but, all things considered, I think I'd rather have the five extra base cards from my hangers.

I think most Heritage fans would agree with me there. 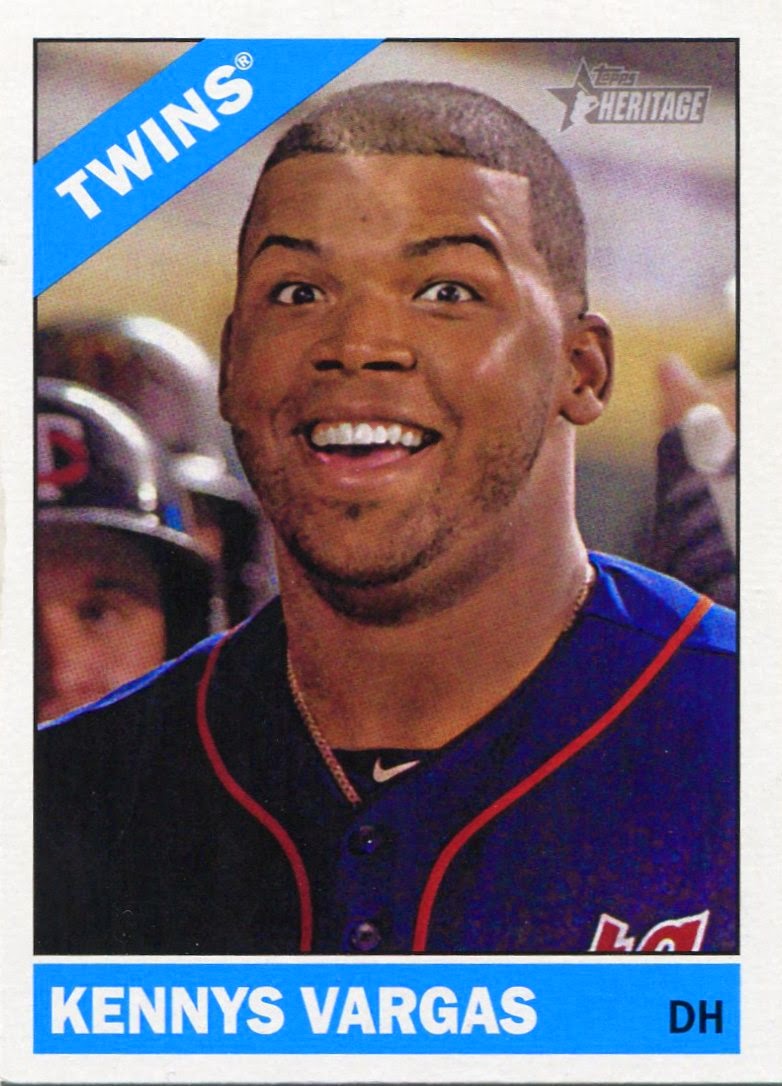 See, this is the kind of unabashed fun that Heritage is supposed to be about.

We don't need the endless supply of SPs or chrome parallels to enjoy this brand. True Heritage fans don't want those.

What we want are more cards like this Kennys Vargas. I don't know much about this Vargas fellow, but I can tell he's a fun-loving dude from this shot alone. It's one of the greatest cards Heritage has ever produced.

I guess the one piece of advice I'd give to the people in charge of Heritage is to stop trying to make the brand into something it isn't. I understand that the gimmicky SPs help drive up sales. I may be a low-end guy, but I'm not naive.

All I'm saying is that a little more focus on the actual base cards would probably bring a new fan base to Heritage. The fan base of the everyday collectors. It seems like a lot of bloggers just buy a pack or two of the stuff and then leave it alone. I doubt I'll be buying anymore this year. (Although I will be open to trading for the remaining base cards I need.)

Let's focus on the base cards a little more, Topps.

If you don't want them I'll take those retail exclusive chromes off your hands.

Heritage isn't my cup of tea but these kind of posts give me excellent insight into the thoughts people (who can actually appreciate Heritage) have.

I really like the Cubs Rookies Chrome card. It may not have anything to do with 1966 Topps, but it's still nice!

I still can't get past the registered trademark symbol at the end of the team names. Sorry, but it just annoys me.

any chance we can swing a swap for that chromey Adam LaRoche?

hit me up on the emails if he's available.

I already miss 2014 Heritage and the amazing '65 design. Let the design drought begin.

If you actually collected in the 60s, as I did, you love all these designs that the more modern (read "younger") collector doesn't. When I was collecting, sure, the 65s were very popular. But so were the 64s and 66s. When you opened a pack of baseball cards from Topps in those days, you knew it. Lime green Braves in 64, hot pink Pirates in 65 and 66, purple Mets in 66, and so on. Growing up, no card design was more praised and loved than the '67 (yes, far more than the also loved 65s and none of us had ever seen a '52). Everybody hated '68--then and ever since. But the 69s harkened back to the clean look of the 67s and were loved again for the same reasons. Repeated photos were the one complaint in 69. You may not think so now, but the 70s were sleek and powerful. There'd never been a gray border before--only white. And the backs, with the bright yellow and blue color scheme, were among the most readable ever.

And, further more, the 71s and 72s--at the time--were quite divisive. You either loved them or hated them, but an awful lot of folks hated them. The "action" photos were NOT an instant hit and the backs not carrying full stats drew howls of complaint. And the 72s? Sure, they were colorful again, but their psychedelic nature gave an awful lot of young collectors headaches, metaphorically speaking. And the backs were horrendous. The 73s were considered dull and the 74s duller. The 75s I think everybody liked, but not necessarily for the same reasons people like them now.

I sorta get that lots of collectors today don't like the '66s. I love them, myself, but I get it. But, for the life of me, I'll never understand why anyone doesn't love the '67s. Back then, we all thought Topps had reached the very pinnacle of baseball card design.

Have to agree with Stubby. Although I sisnt rip new packs in 66. Started in 69. These older sets are all special for one reason or another. I have always loved th .67 set. I really don't hve anything against the 66 set. When I was a kid if you could get your hands on some it was really something

I am with you 100%. I've done a few Heritage sets, but only completed 2008 so far. Started a few more, but really only for the base sets.
If the point is to mimic the classic sets, then SPs are only permissible if the last series of the original set was scarce. When they get to the sets that were all one series, then short prints should go away.
I've never understood the Chrome parallels except to cater to the people that like Bowman Chrome or old Playoff sets on foilboard.
The biggest thing to me is that the inserts are always exactly the same.
One thing I like is that they make the leader cards like the old versions, with small pictures of each player instead of some random action shot that looks like every other base card. And the managers. I've contemplated just collection the managers from all the sets.

I started collecting in 1974, so most of the cards of my youth were from 1973 forward, but every now and then we'd get access to cards from the 1960's and early 1970's, and that was always exciting, even if we didn't know the players (which was usually the case). I had a couple of 1966 cards when I was a kid, and I guess that's why I like this year's Heritage better than other people seem to.