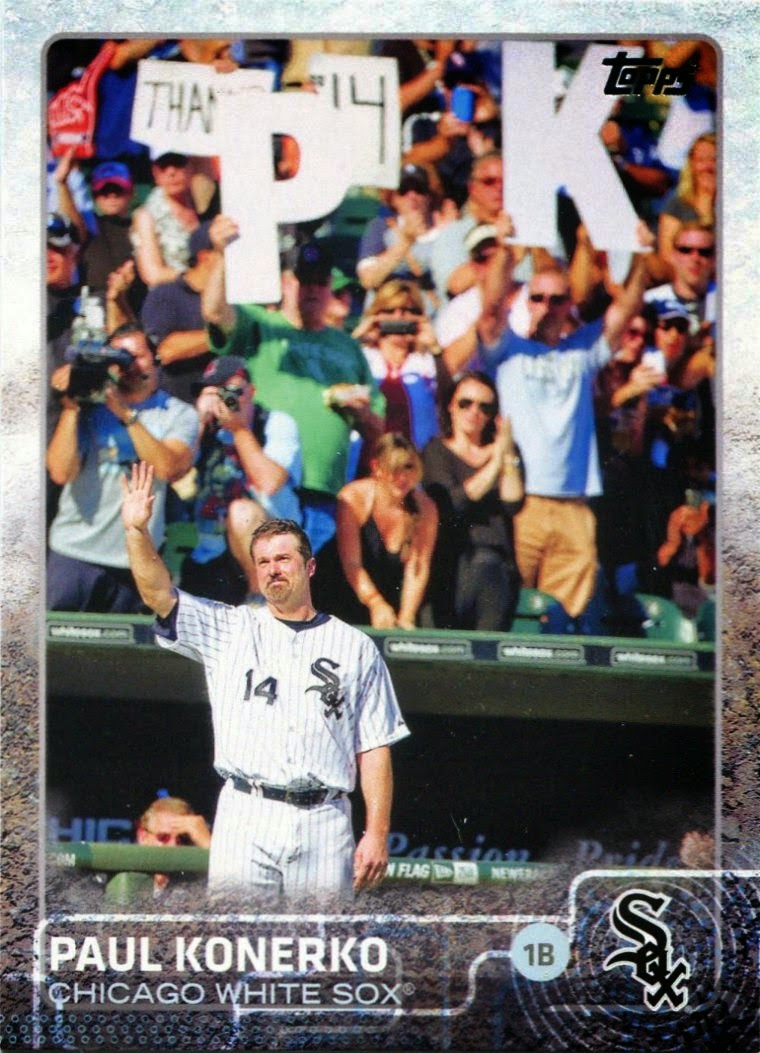 It was a little over three years ago that I decided to start this little blog.

I created it on a whim on an ordinary Wednesday night. Blogging didn't really strike me at something I'd want to do long term. I'd been reading blogs for a while and figured I'd at least try my hand at it. Little did I know how big of an impact that night would have on me.

Here, three years later, blogging is an integral part of my life, and its effect has gone well beyond the blogosphere. I've mentioned this before, but I decided to become an English major last year. A class I took inspired me to start picking up more books, to start writing more, and to generally start becoming more involved with literature.

Looking back, though, I can honestly say that my passion for writing can be traced back to when this blog was born on that Wednesday night over three years ago. I've branched out and started to pen stories that don't have anything to do with baseball cards, but it all started with baseball and these beautiful two-by-three-inch pieces of cardboard.

Fast forward to a couple weeks ago, when my school's bi-annual literary journal was released. 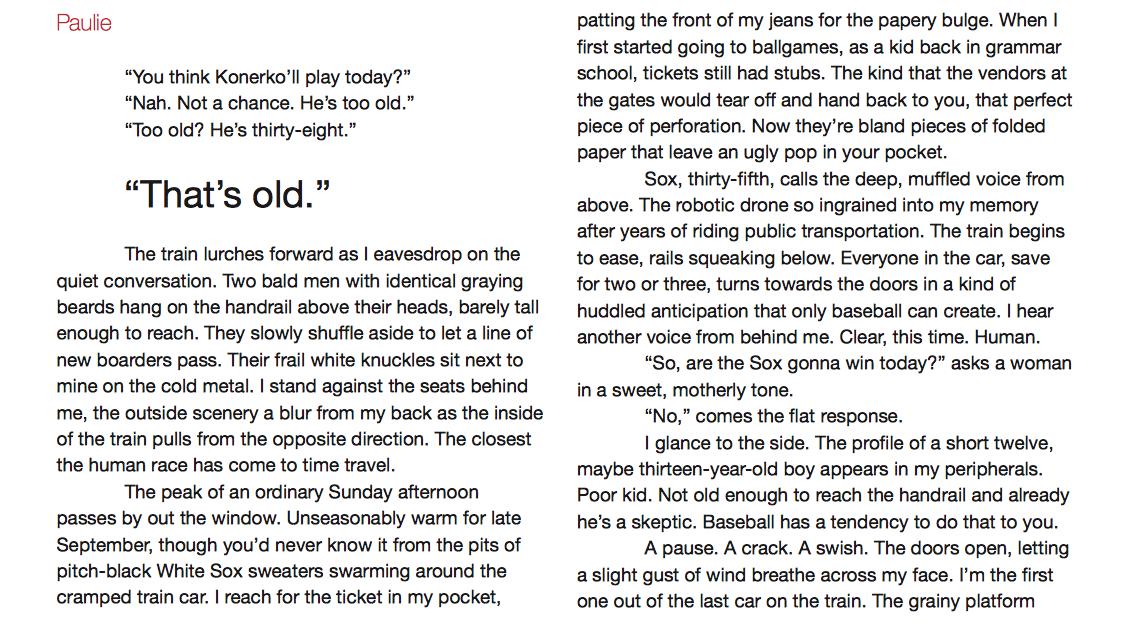 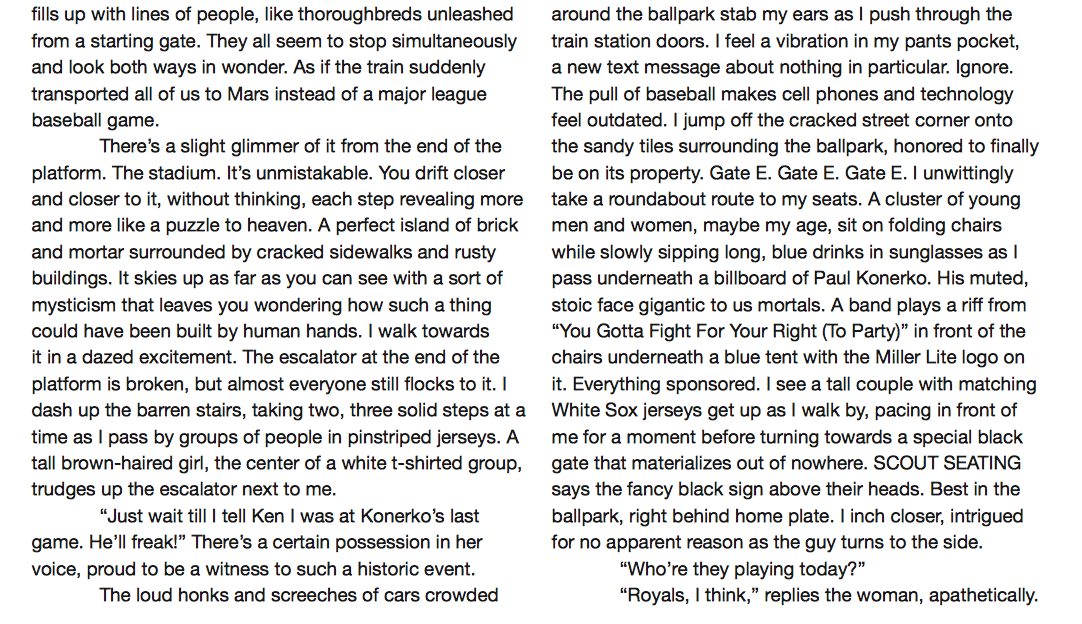 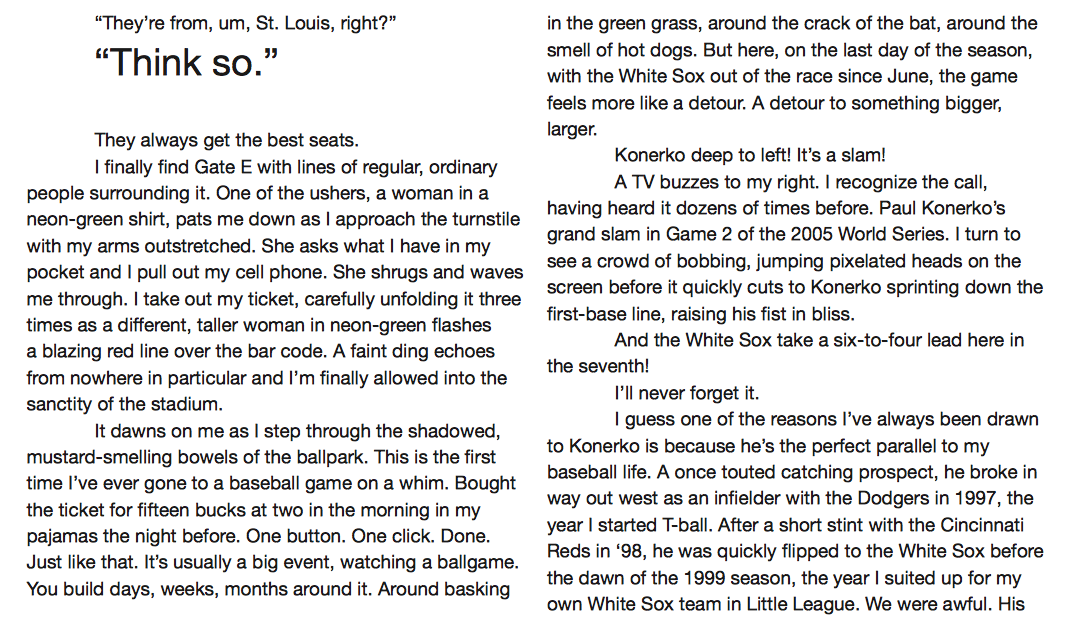 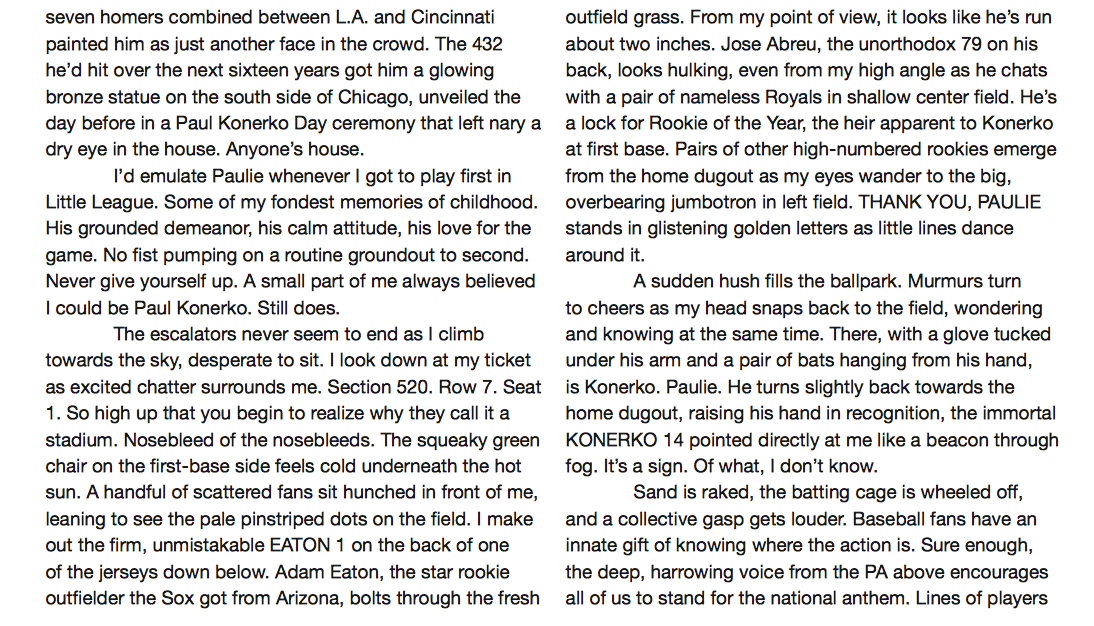 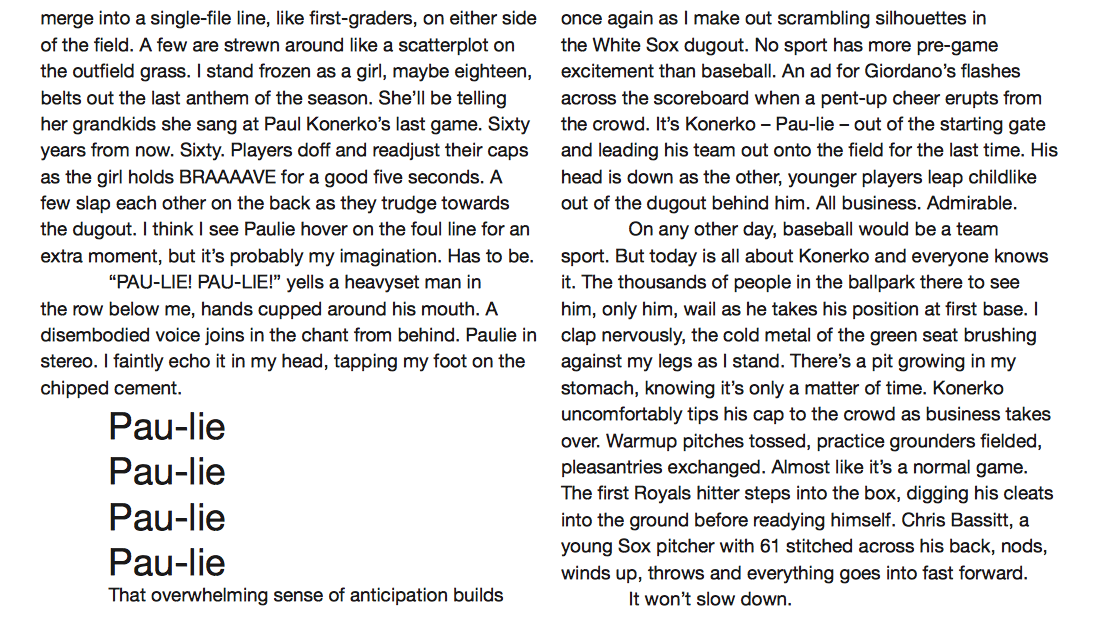 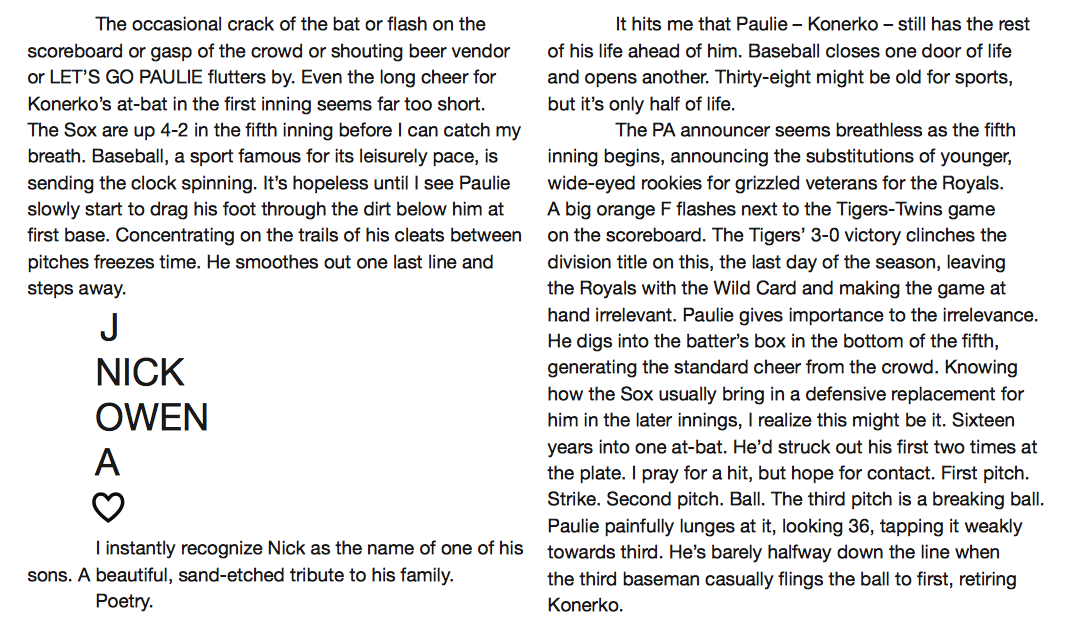 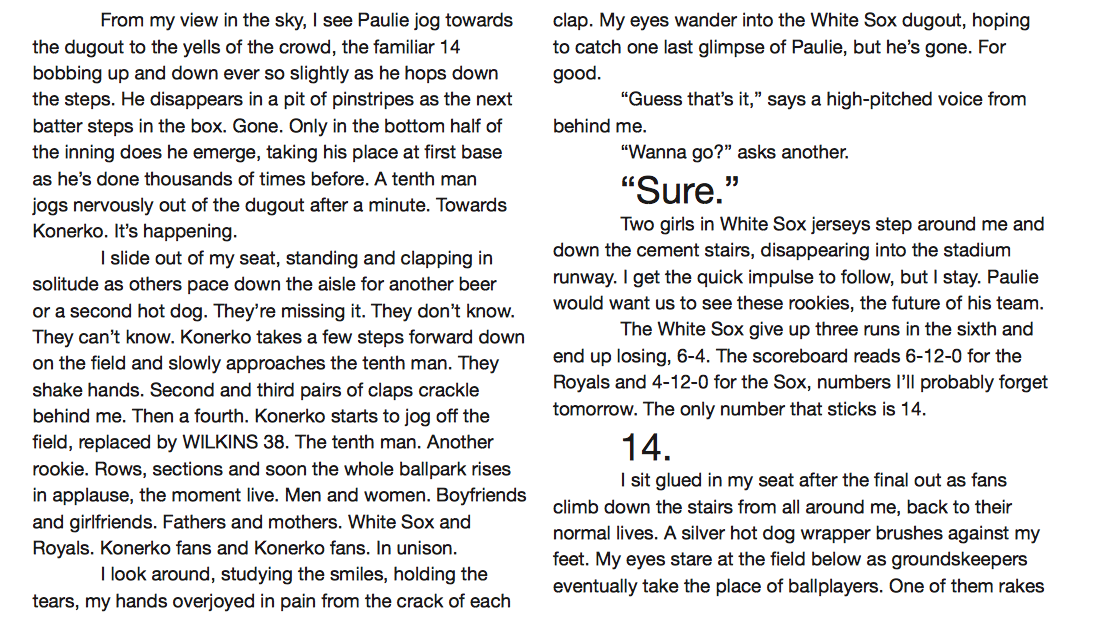 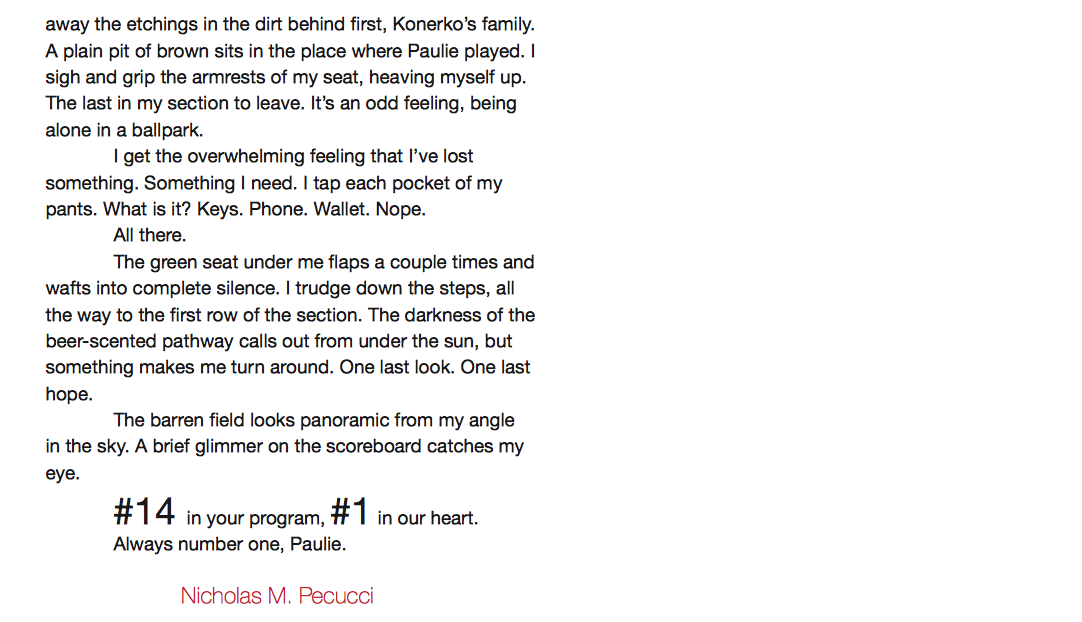 ...I had a story published.

Though I try to write about subjects outside of baseball, a lot of my work seems to come back to the National Pastime one way or another. This one revolves around Paul Konerko's final game at Sox Park last year. It's not quite non-fiction, since I wasn't actually at the contest, but I tried to make it as real as possible.

This is the first story I've ever had published. It was only a first draft and I honestly wasn't expecting it to make the cut. I even managed to build up the courage to give a reading of it at the journal's launch party a couple weeks ago and met a lot of great people. (You can flip through the entire thing here.)

I think most of us can agree that Paulie's 2015 Topps card is a masterpiece, but it'll always carry a bit of extra meaning to me because of this story. I only wish I'd had it before I submitted my piece, because it would've made for a perfect cover shot.

I seriously can't express my gratitude towards the blogosphere enough. Maintaining this blog on a regular basis allows me to both write about the hobby I love and help hone my writing craft in general. (Not that I'm the world's greatest writer now, but reading through most of my older posts makes me cringe.)

Great stuff, Nick. I was edited and published an art/lit journal for a few years, and nothing beats seeing that first piece in print.

If you want to check out some masterful baseball-related writing, read Don DeLillo. The opening chapter is built around Bobby Thomson's walk off homer, and it's just an amazing piece of writing. The whole book is fantastic, though it's far from a quick read.

Congratulations Nick ! I've had some stuff published, but obviously in French, so I know the feeling too.
And yeah, I agree with Mark, the first pages of Underworld are very special

That is pretty awesome, Nick. I've had a bunch of articles I've done for my work published, and I was co-editor of a book, so I know how cool it is to see something you have written in print.

Get out your old records, and play "HAVE A DRINK ON ME"

Congrats Nick, that is awesome!

For those who mentioned Underworld....I bought Nick the novella "Pafko At The Wall" which Delillo re-worked into the intro of Underworld...and I have the book ready to loan him!...