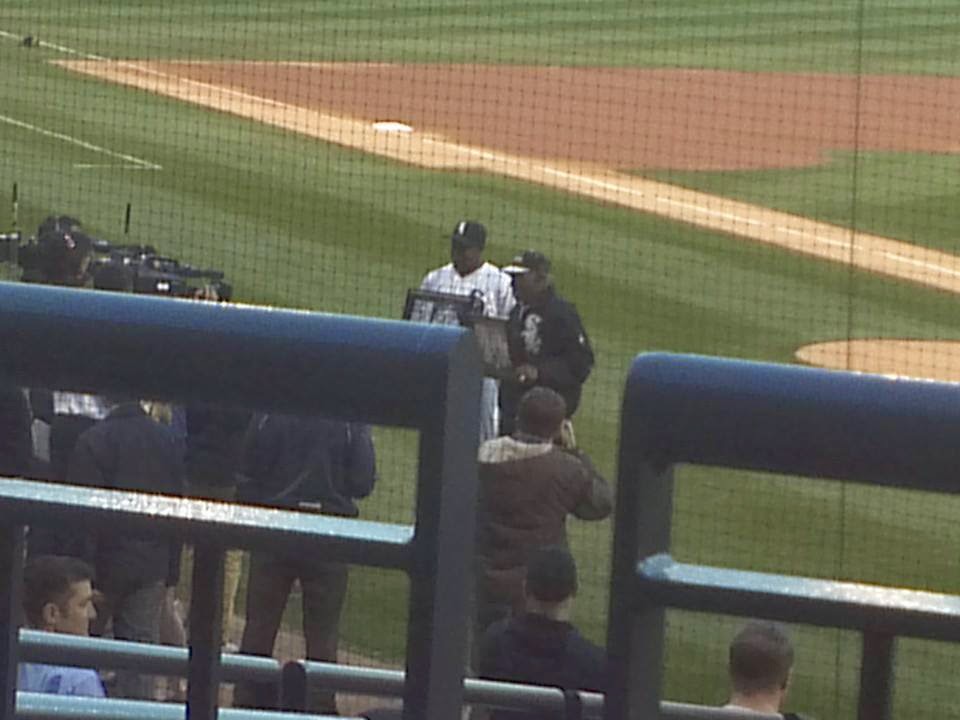 This has not been a good year for Chicago baseball so far.

First we lost Mr. Cub, and now Minnie Minoso. The "Cuban Comet" passed away at the reported age of 90 on Sunday. (His exact age is debated due to a lack of proper birth documentation.)

I don't know if the news of Minoso's passing will receive the nationwide attention that Ernie Banks's did, but Minnie was just as big of a personality in the city of Chicago. The news of his death made yesterday a pretty gloomy day for me.

I had the pleasure of seeing Minoso in the flesh at the first of two White Sox games I attended last year. You can see him there next to (now former) Sox outfielder Alejandro De Aza as part of a special pre-game ceremony. The Cuban great was only about twenty rows away from where I was sitting.

I felt honored just being in the same ballpark as the guy. 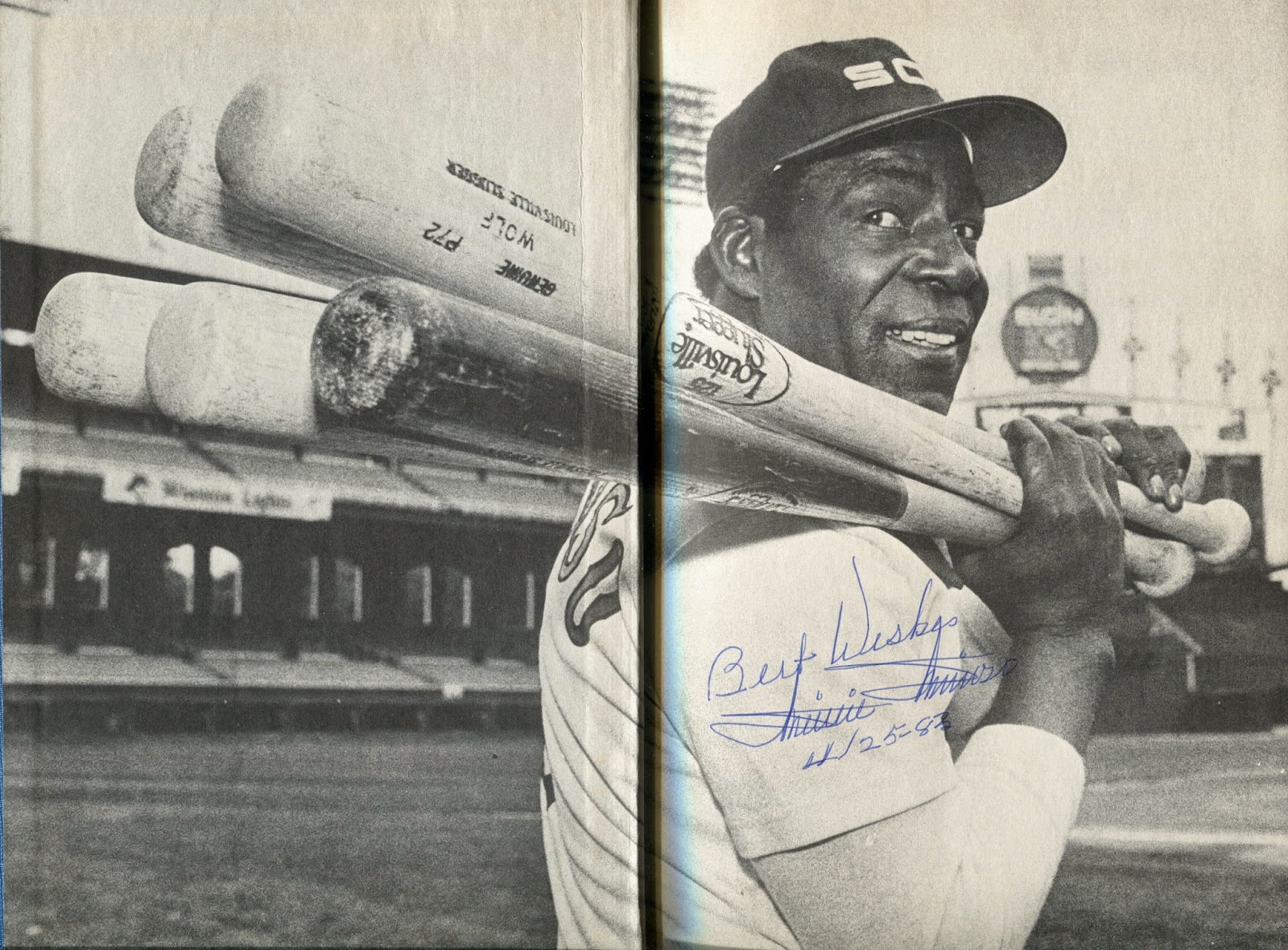 One of my earliest baseball memories involved Minnie.

Back when I was about seven or eight years old, my mom picked up a copy of Minoso's book at a garage sale for a dollar. (The book itself is pretty tough to find these days.)

I don't recall if my mom bought the book knowing that it was autographed or not...but, yeah, the copy she found was actually signed by Minnie himself inside the front cover. I don't think I ever read it, largely because I was too stunned at the autograph to go any further. (Although I plan on giving it a read soon.)

I can't say for certain, but that experience might've been my introduction to Minnie Minoso.

I've been a devout fan of the guy ever since.

Saturino Orestes Armas (Arrieta) Minoso was one of the first Cuban ballplayers to play in the bigs. He actually broke in with the Indians in 1949, but he broke the White Sox color barrier when he was dealt to Chicago two years later.

Minoso's first few cards, including his '52 Topps rookie, list him under his given name, Orestes. 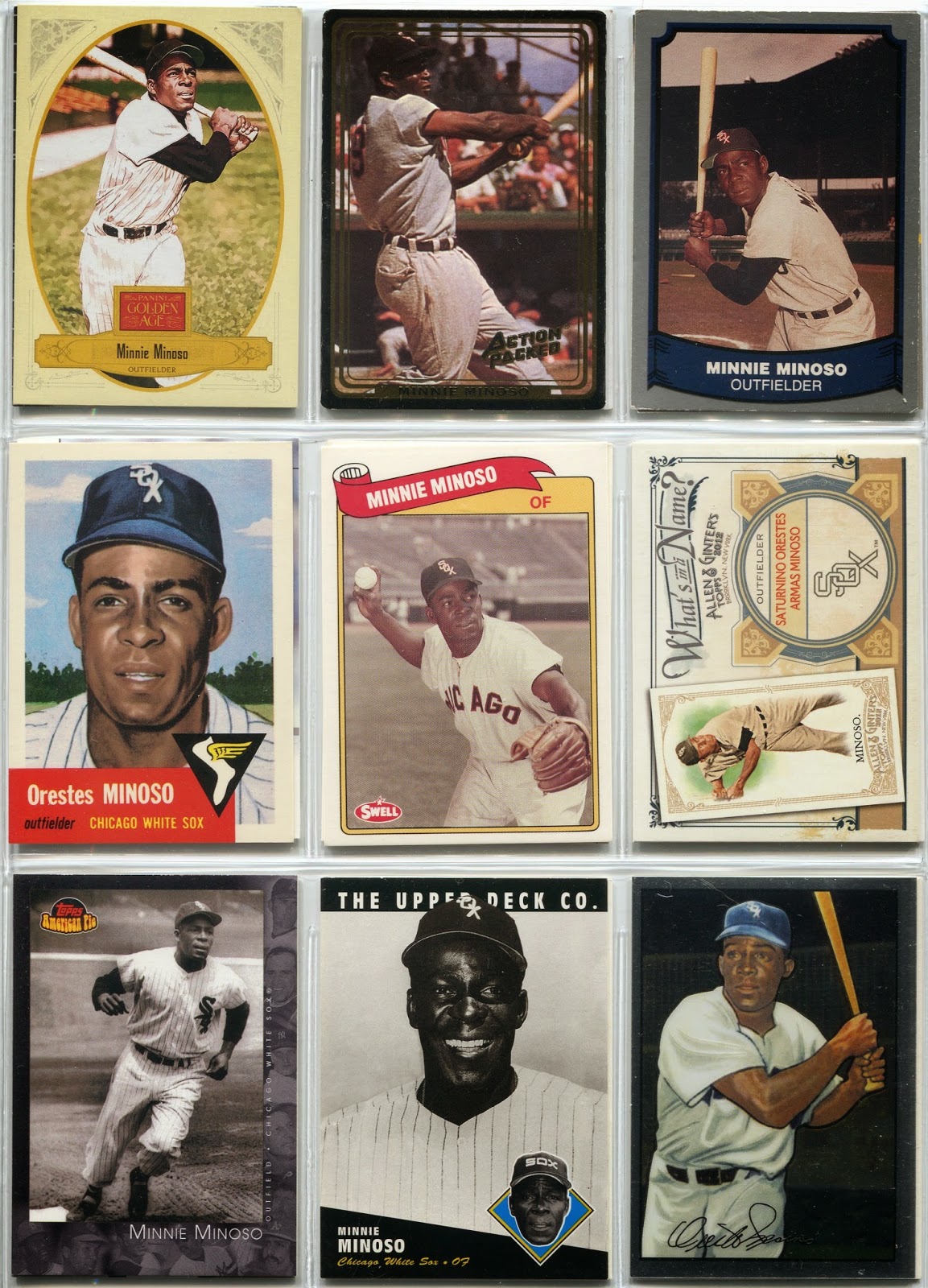 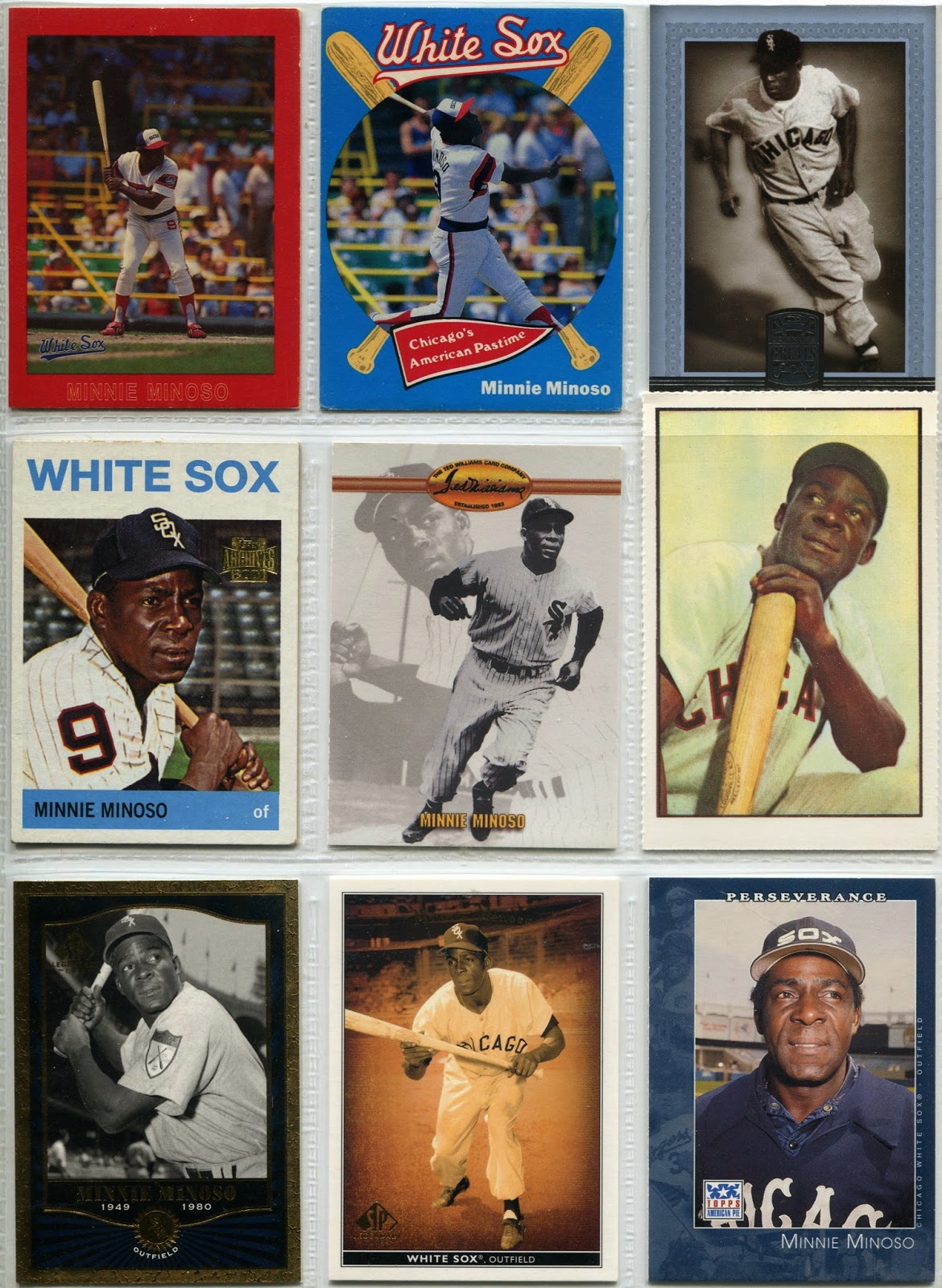 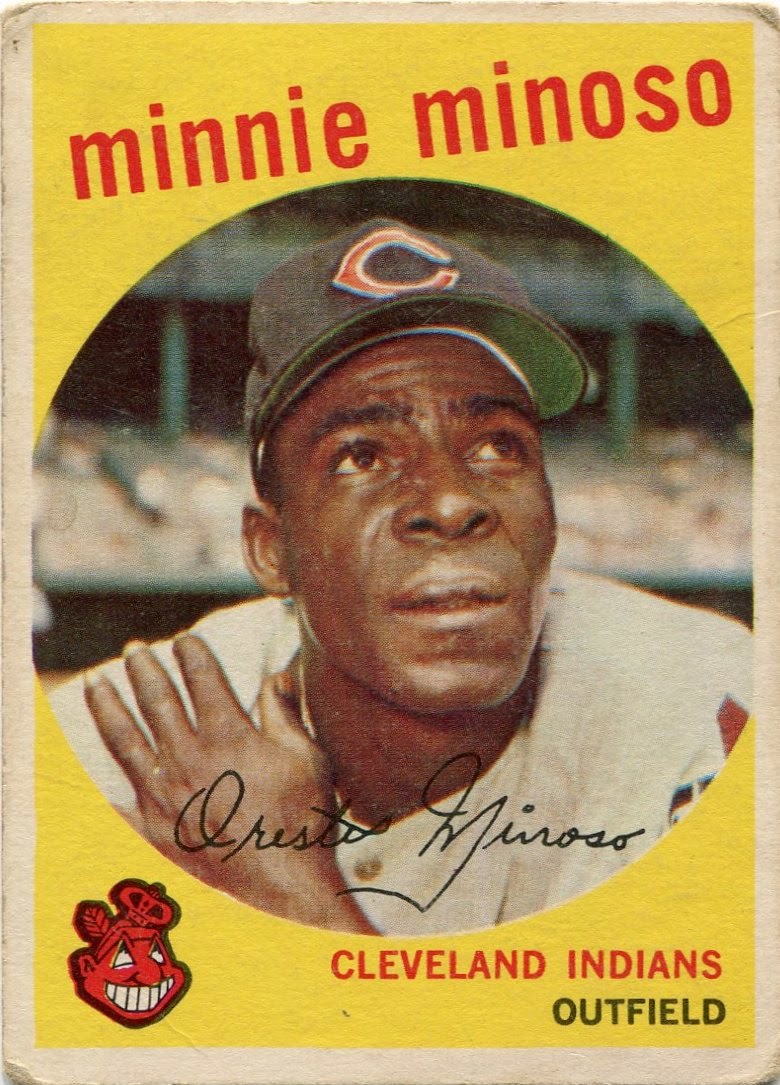 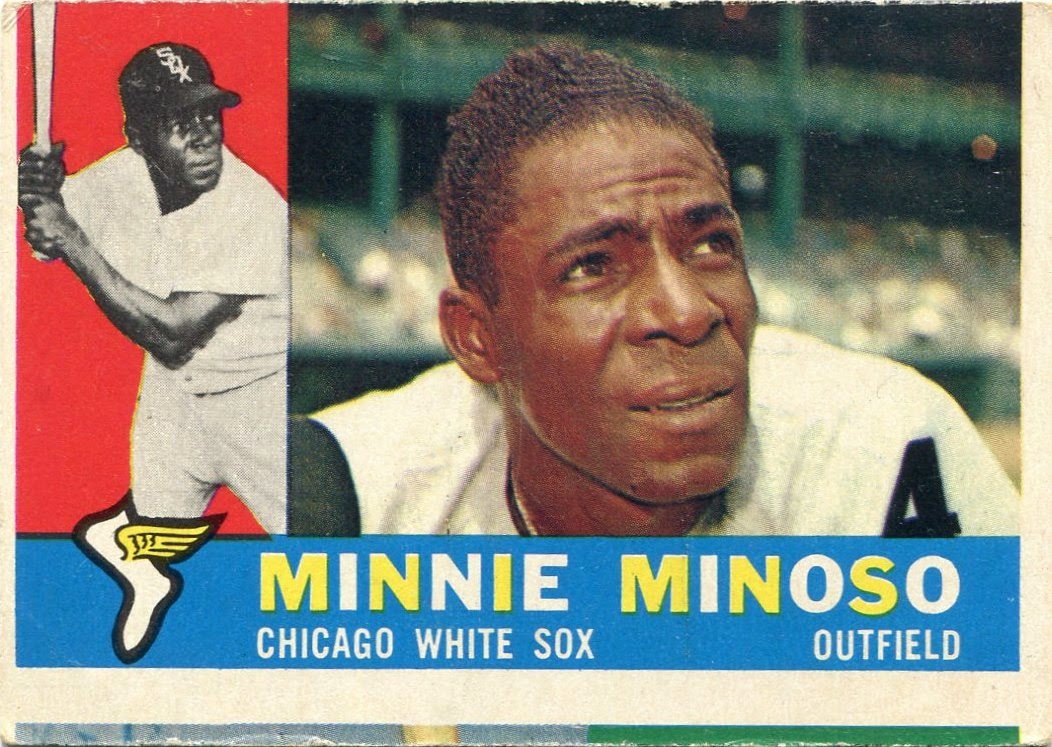 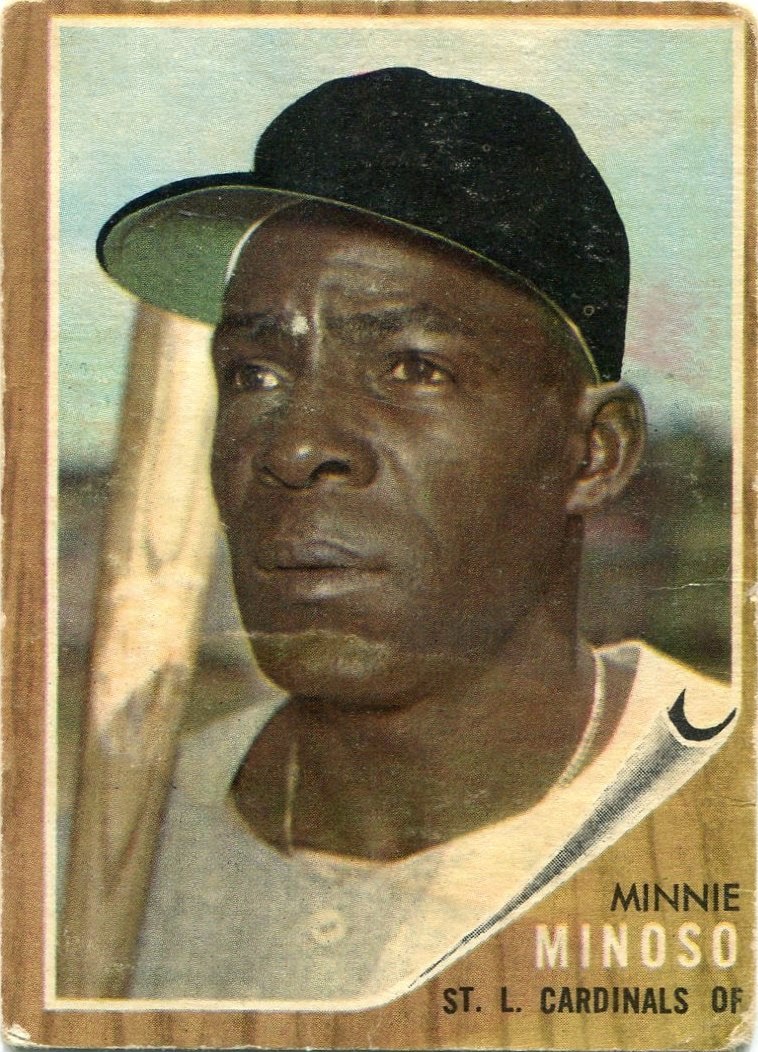 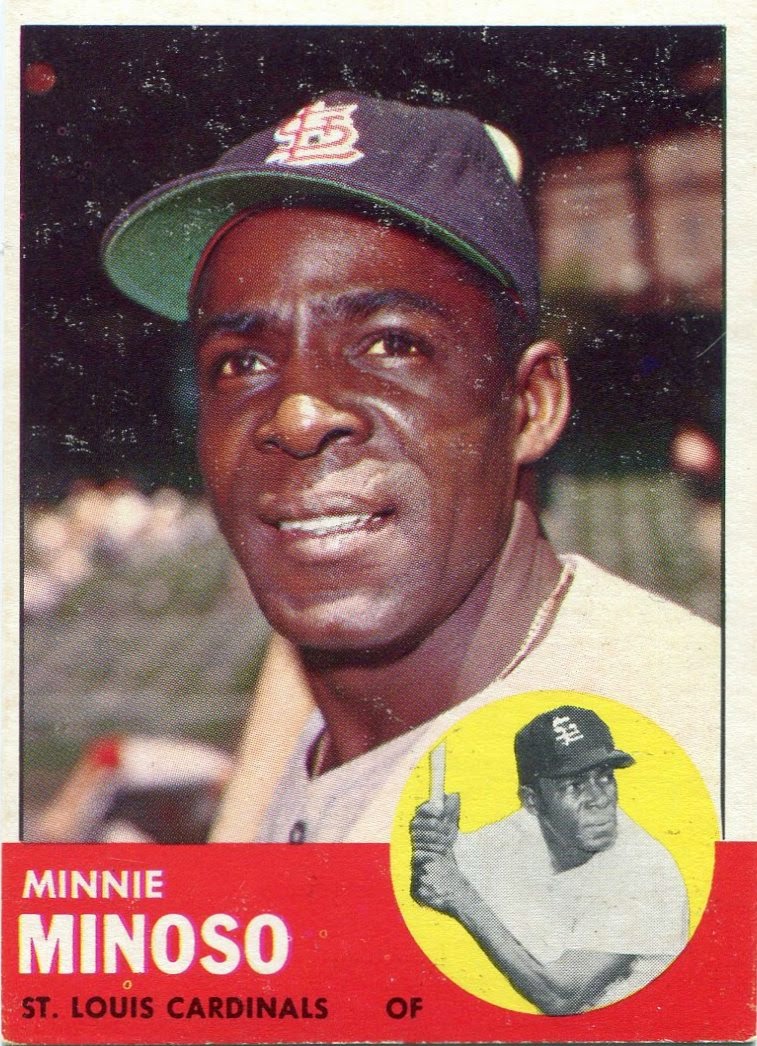 After fifteen years of greatness in the bigs, though, no one knew him as Orestes.

He was Minnie to fans and friends alike.

Although he made brief stops with other teams (Indians, Senators, and Cardinals), Minoso was, first and foremost, a beloved member of the White Sox. He loved the city of Chicago, and the city of Chicago loved him right back. He was, by all accounts, a true ambassador for the game of baseball.

Sadly, his cards are fairly sparse, as companies have pretty much ignored him as of late. You can probably count the number of cards he's had issued in the last ten years on one hand. He's not as well-recognized in the card community as, say, Ernie Banks. But he should be.

Still, since I'm not great at writing these teary tributes, I thought I'd honor the "Cuban Comet" the only way I know how.

Here, in all their glory, are my five favorite Minnie Minoso cards. 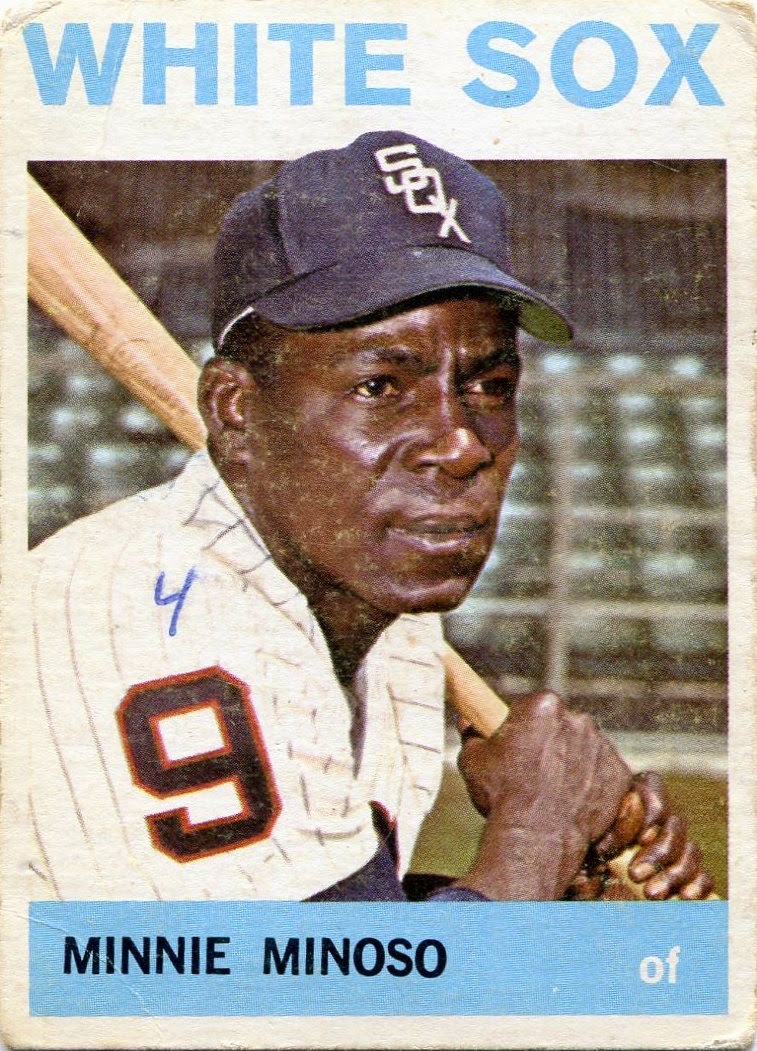 Minnie was on his last legs by the time this one hit the streets. He'd already had a few mediocre years with the Senators and Cardinals by the time he rejoined the White Sox in '64. I don't know this for sure, but I'm guessing that Minoso wanted to end his career in Chicago, the city he loved so much.

He played in just 30 games with the '64 Sox, but Topps was gracious enough to grant him a card that year nonetheless.

I couldn't have been happier when I picked it up for a couple bucks at a show last year. 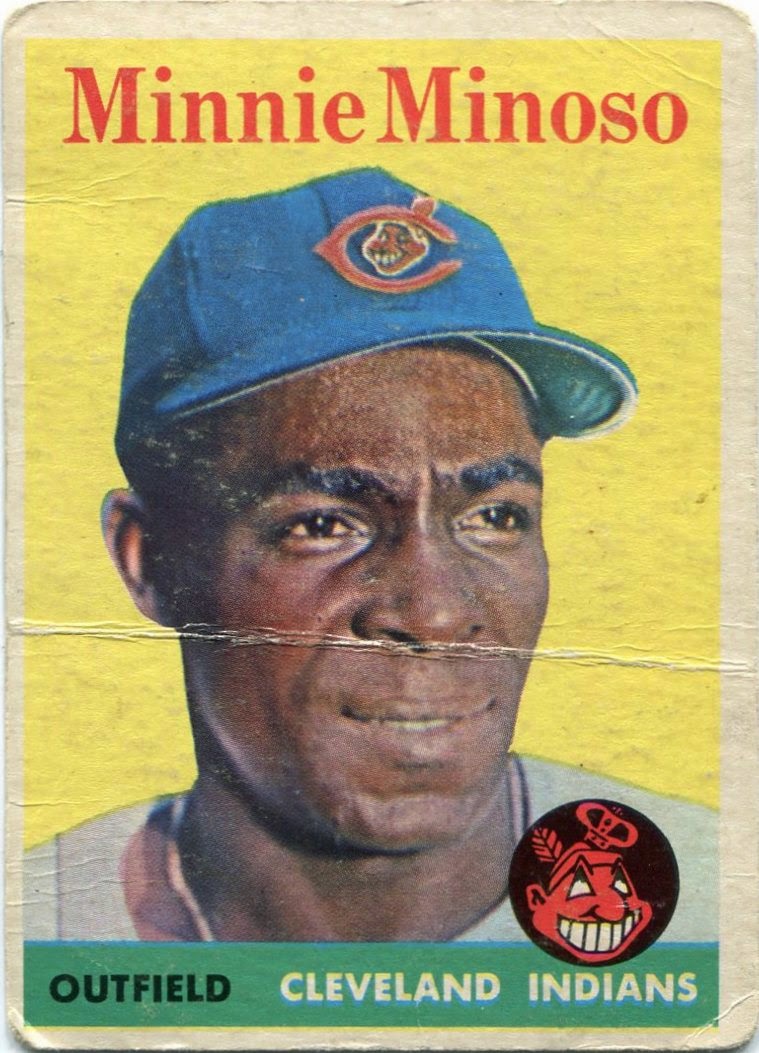 This card and I go back a long ways.

I bought it at one of the first shows I attended after getting back into the baseball card game, likely around 2005 or so. I don't recall exactly what I paid for it, but it was part of a big bin full of discount vintage. I trotted it around in my hands all day after that.

I can't say I remember a ton about my life in 2005, but the memory of digging up this card for my budding collection is a moment that will stay with me forever. 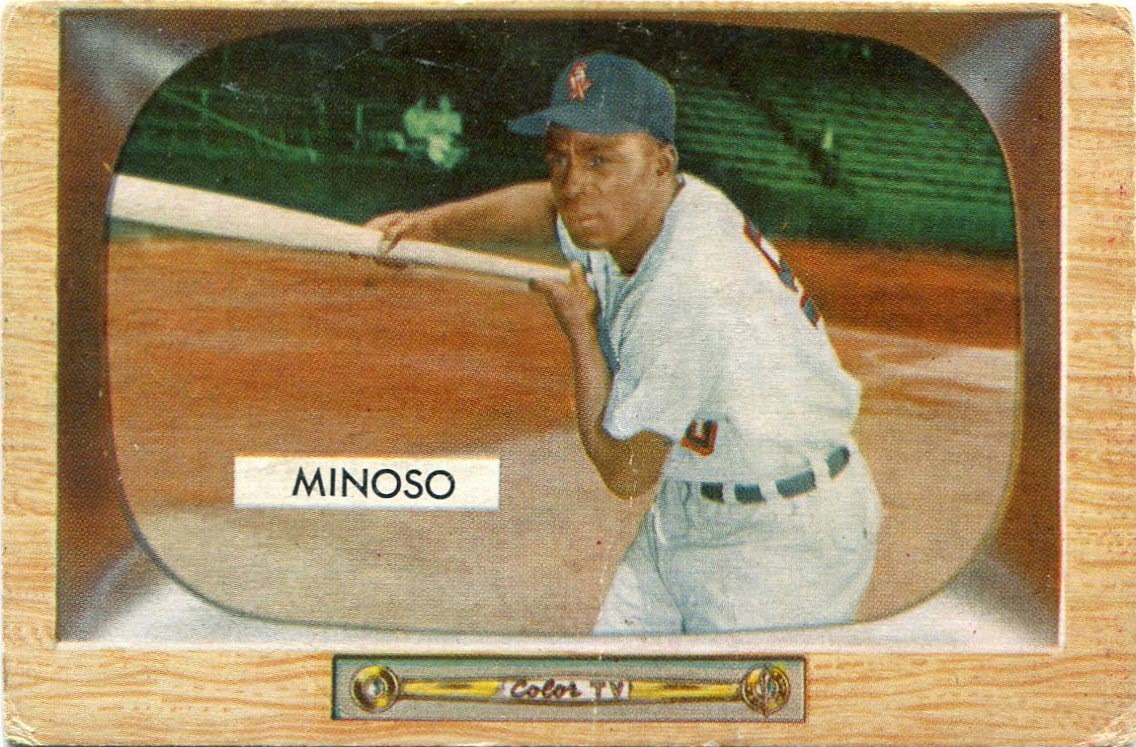 When we're talking classing designs, 1955 Bowman has to be right near the top for me.

It was one of the first vintage sets I ever fell in love with. Although I'm sure some would disagree, the color TV look is an iconic one in my book.

Minnie's card from the set fell into my hands for a mere four bucks at a show a couple years ago. He seems to be caught in between a bunt and a swing here. Not the most conventional shot, but still beautiful.

Anything from 1955 Bowman is always beautiful. 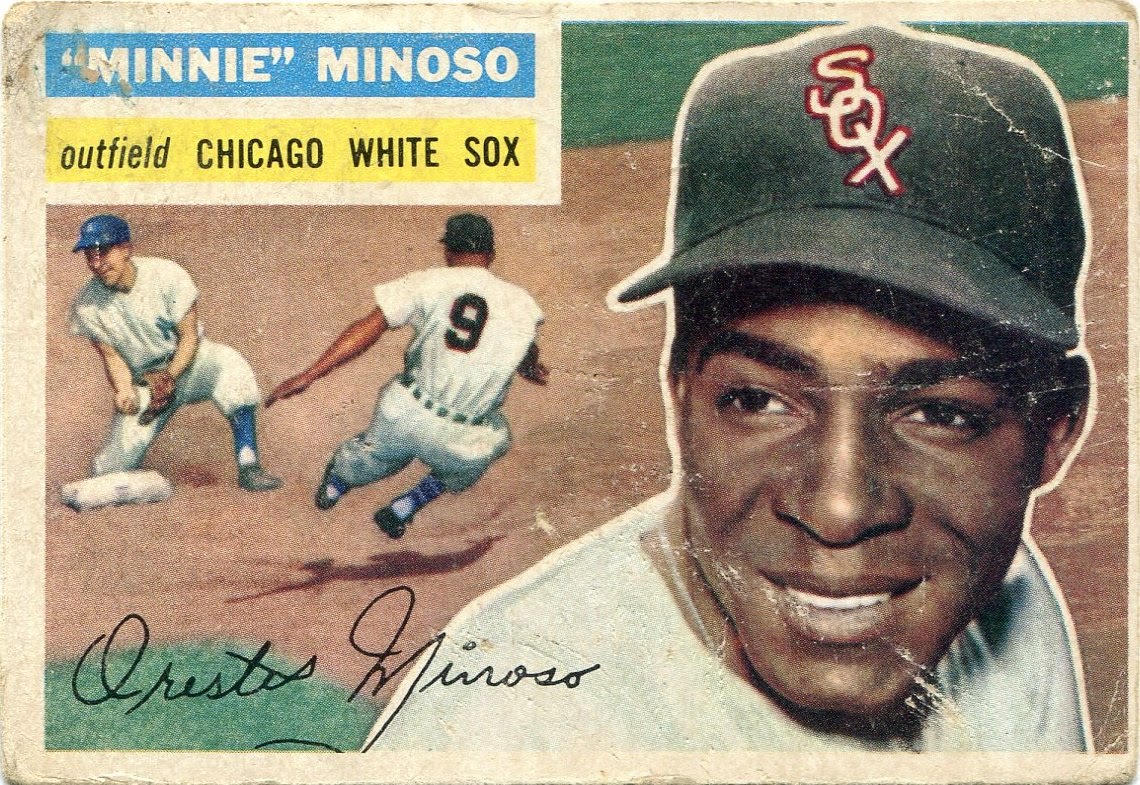 This was another four-dollar pickup from a card show last year.

I usually have to stop and think about buying anything that costs more than two or three bucks, but this one was a no-brainer. It's Minoso on one of the all-time best Topps designs, complete with a terrific action shot. It's also the first time Topps listed him as "Minnie."

With any other player, a card this spectacular would probably be #1 on the list. 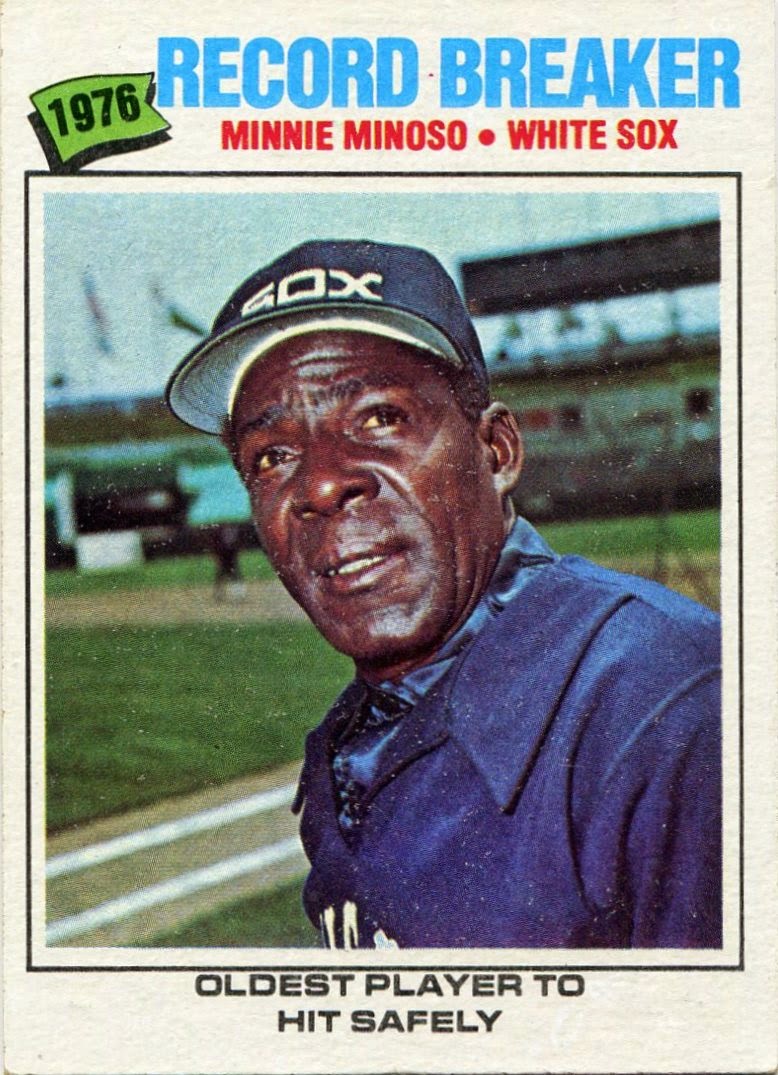 In 1976, the White Sox brought Minoso back to take a few at-bats with the big club at 53 years young. Part of it was obviously a publicity stunt, since Minnie hadn't played in the bigs since 1964.

I'm sure Minoso was all business, though. Heck, he even managed to knock out a solid single in one of his eight at-bats in '76, making him the oldest player to get a hit in the majors and netting him his very own "Record Breaker" card in the following year's Topps checklist. (The record still stands, by the way.)

My dad, like so many others of his generation, remembers Minoso's comeback well. In a way, Minnie endeared himself to a whole new era of baseball fans with those eight at-bats in 1976.

The Sox brought him back for another couple of games in 1980, but he didn't get a hit. Although it should be noted that he managed to put the ball in play in each of his two at-bats.

It's always tough when baseball loses a member of its family, but it's even tougher when that ballplayer was such an icon of the city you love so much. All I can say to the White Sox this year is to go out and win one for Minnie.

Hard to believe it was only 8 at-bats in '76...it was a HUGE deal in Chicago that year!...watching him out there in those goofy shorts ....great memories...

Very nice - He has a bit of a local connection here in MN as well - he appeared for an at bat for the Saint Paul Saints in 1993 and then again in 2003, drawing a walk in his lone plate appearance.

I WILL add that 56 to my collection one day. Beautiful looking card. And the 77RB is very cool too. Great post! Minnie would be proud.

Excellent tribute. Don't see the 1961 in there, which is the best one (because it's the only one I have, or will have).