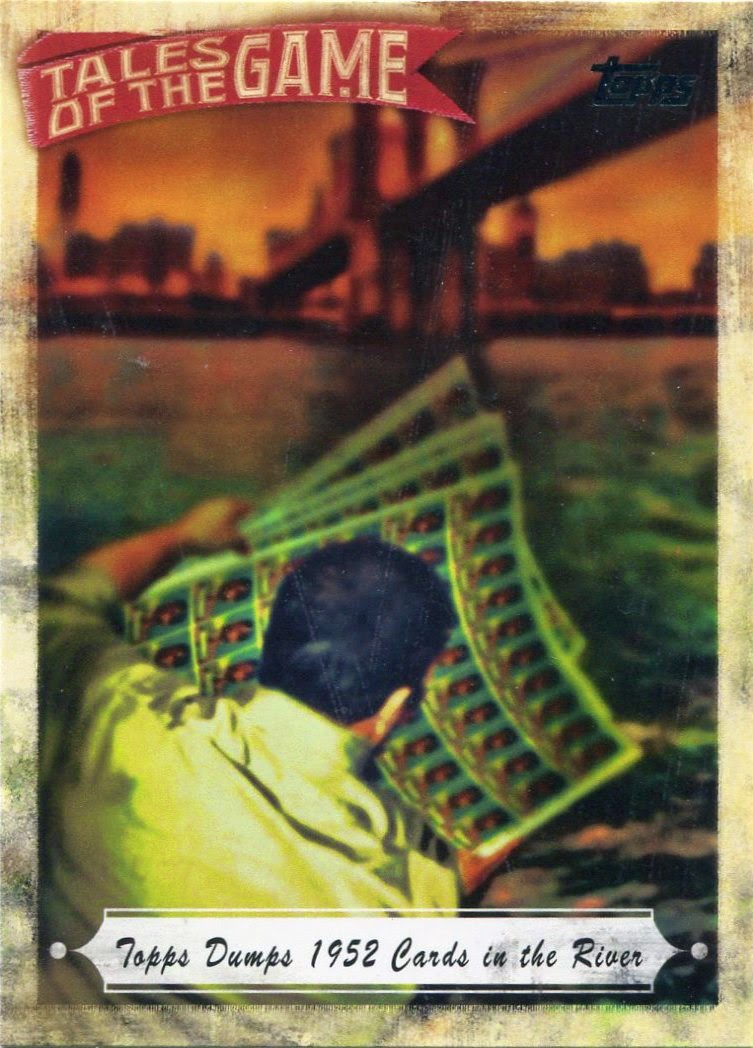 Some of you may remember the All-Time Topps Countdown I was holding on this blog a couple months ago.

I must say that I had a ton of fun both creating and posting the list, and even more fun getting feedback from all you wonderful readers out there. It was a project I'd been sitting on for a while. I just wish it didn't take the passing of an icon like Sy Berger to get me off my butt to do it.

Like every other list, however, my Topps countdown came with a fair helping of second guessing. I went back through my list last week and started to reconsider some of my rankings. Overall, I still stand by the majority of my choices, but, after careful consideration, a few did stand out.

I found a fair number of Topps sets that, if I were to compile the list today, would either be ranked a bit higher or lower than I originally had them.

Let's start with the overrated. 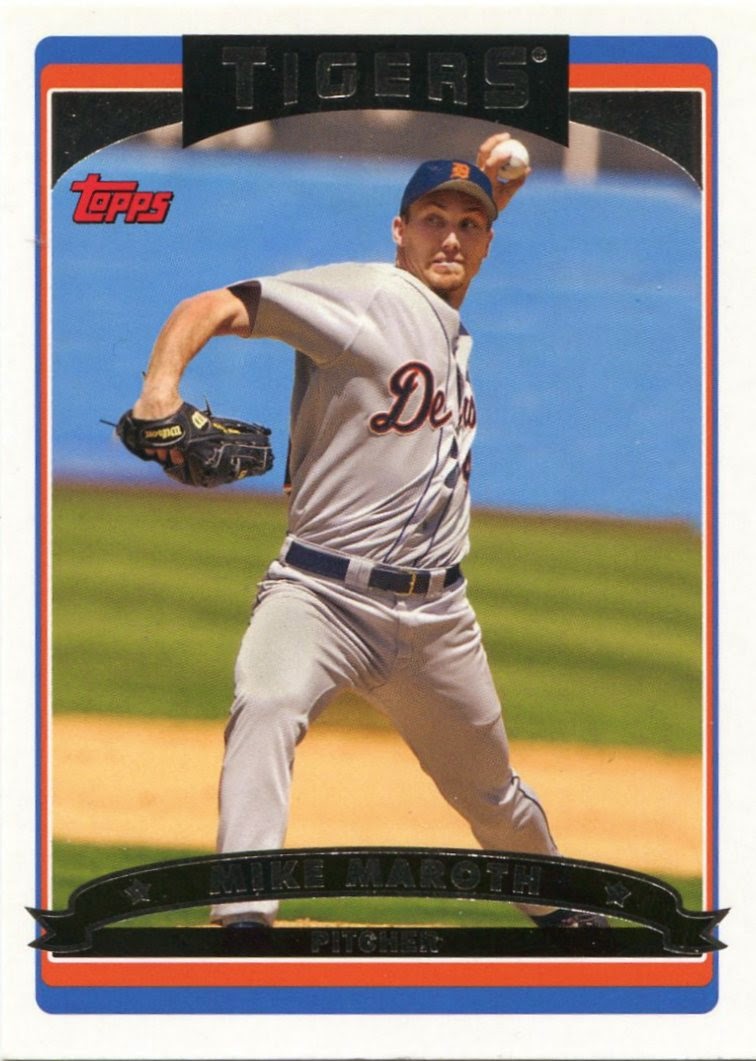 As I harped on over and over again during my countdown, I tried to be as objective as possible with my rankings.

But I still think nostalgia got in the way of a few selections. Namely, 2006 Topps. At #40, it wasn't exactly a top competitor, but, looking back, I don't think it even deserved to be that high.

Now, don't get me wrong. Nostalgia, childhood/adolescent memories, etc. aren't a bad thing with baseball cards. Quite the contrary, actually. But, as is the case with 2006 Topps, it can blind a person to the faults of what is simply an unimpressive sets.

Looking at it now, I see that 2006 Topps has almost everything I dislike in a baseball card design. Silver foil on black nameplates. Boring photography. It just doesn't have a very inspired feel to it.

I'd probably put it in the low 40s if I had to revisit my rankings. 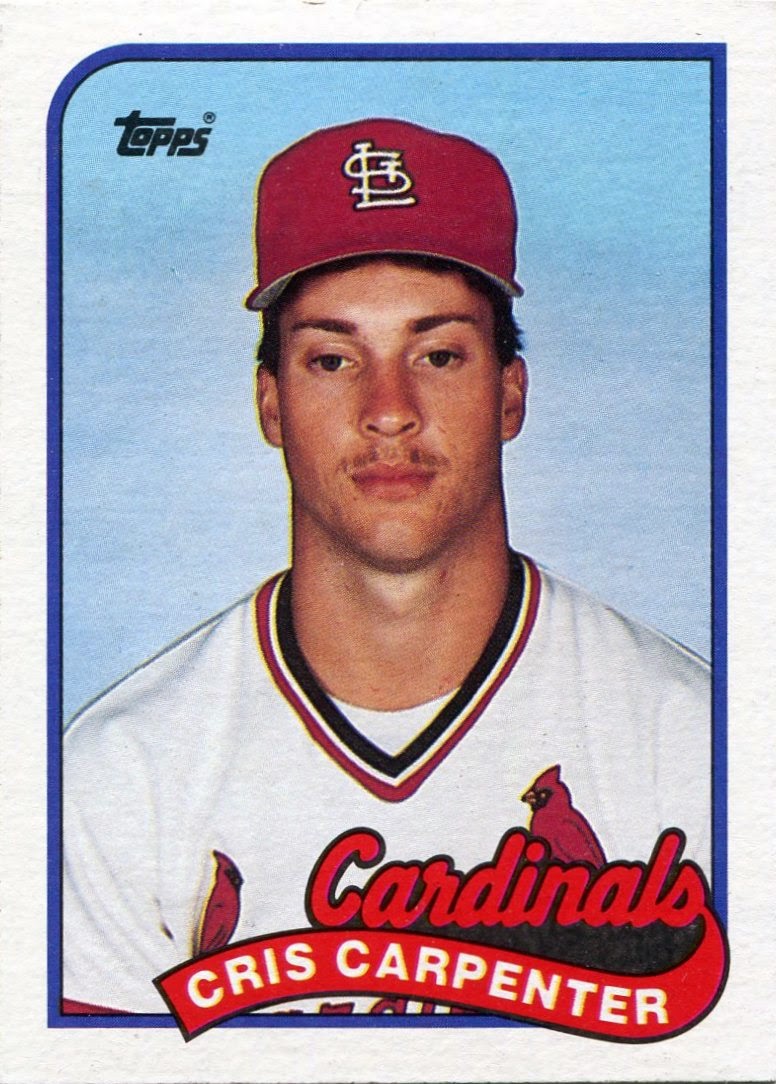 I think the ribbon bug bit me with '89 Topps.

Inserting ribbons into a baseball card design is bound to earn a few brownie points in my book. I can't explain why, but they always seem to look good to me.

The ribbons in '89 Topps are fine and dandy, but the set doesn't have a lot going apart from that. The photography might be the worst of any Topps set out there. (Isn't that right, Mr. Carpenter?) 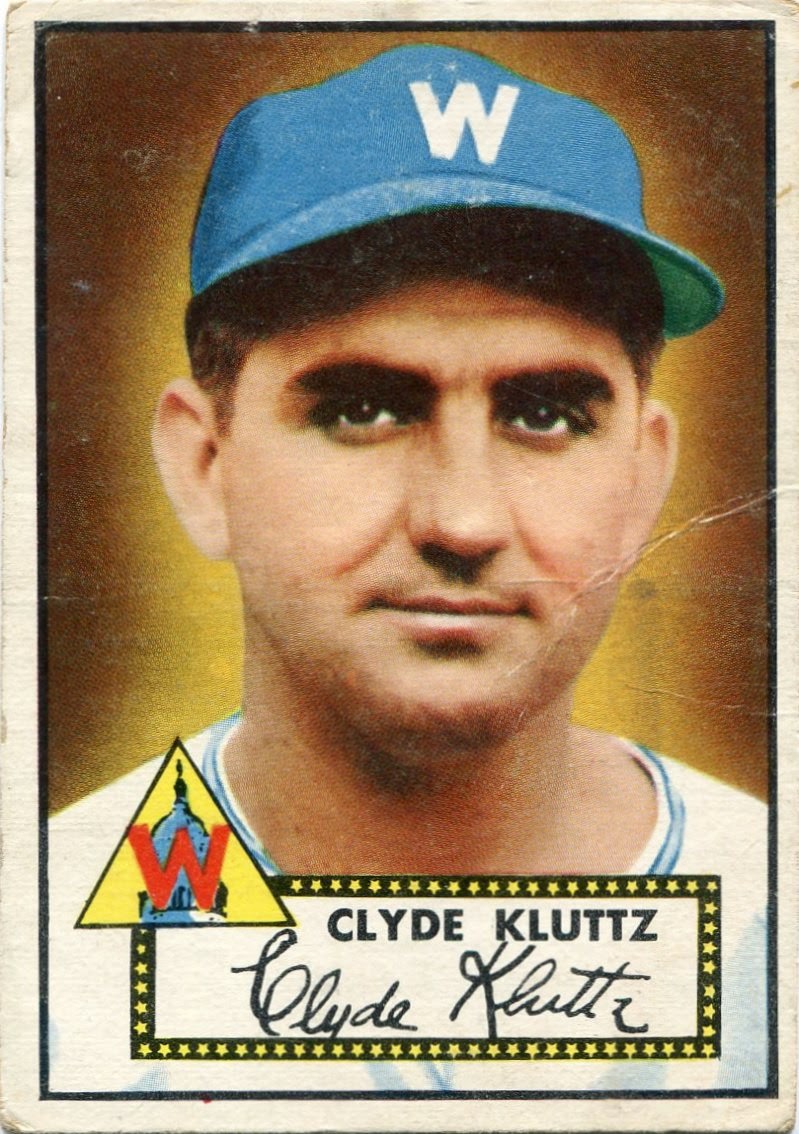 Baseball cards are the stuff of legend.

I think that legend may have swayed me a bit in my ranking of '52 Topps. I don't think I'm out of line by saying that it's the most well-known of all the Topps designs. To a lot of people, this is the ideal baseball card.

But...is it? Is it, really? Maybe it's just me, but I feel that the legend of '52 Topps surpasses the actual design of the cards themselves most of the time. It's a terrific set, sure. But I really don't think I enjoy it more than, say, 1954 Topps, which came in at #26 on my countdown. 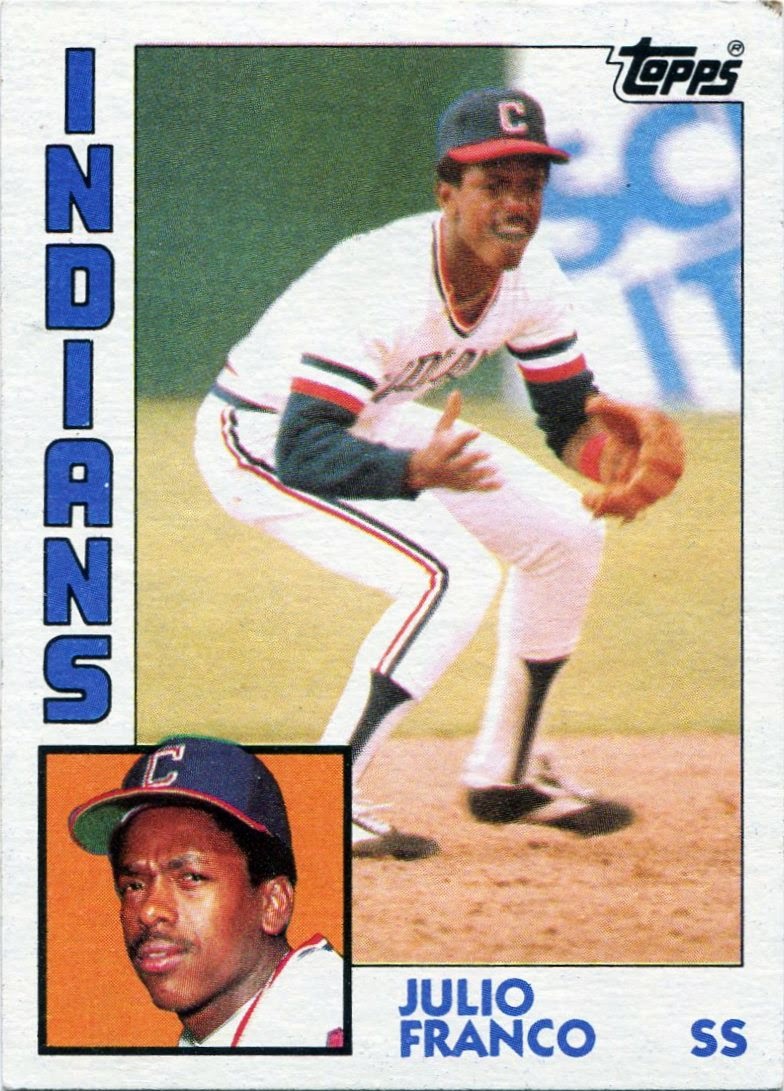 ...second guessing can have its upsides as well.

I think I regret how I treated 1984 Topps more than any other set in my countdown. I actually had it behind 2014 Topps (#44), which just ain't right. I'll be the first to admit my oversight.

I put too much placement on that fact that 1984 Topps is basically a subpar ripoff of '83 Topps. Is it plagiarism? Probably. But that doesn't mean it can't be a good set. And, despite what I originally thought, I do think 1984 Topps is indeed a good set.

I'm not saying it's one of my favorites or anything, but I think it'd be in mid-30s territory if I redid the rankings. 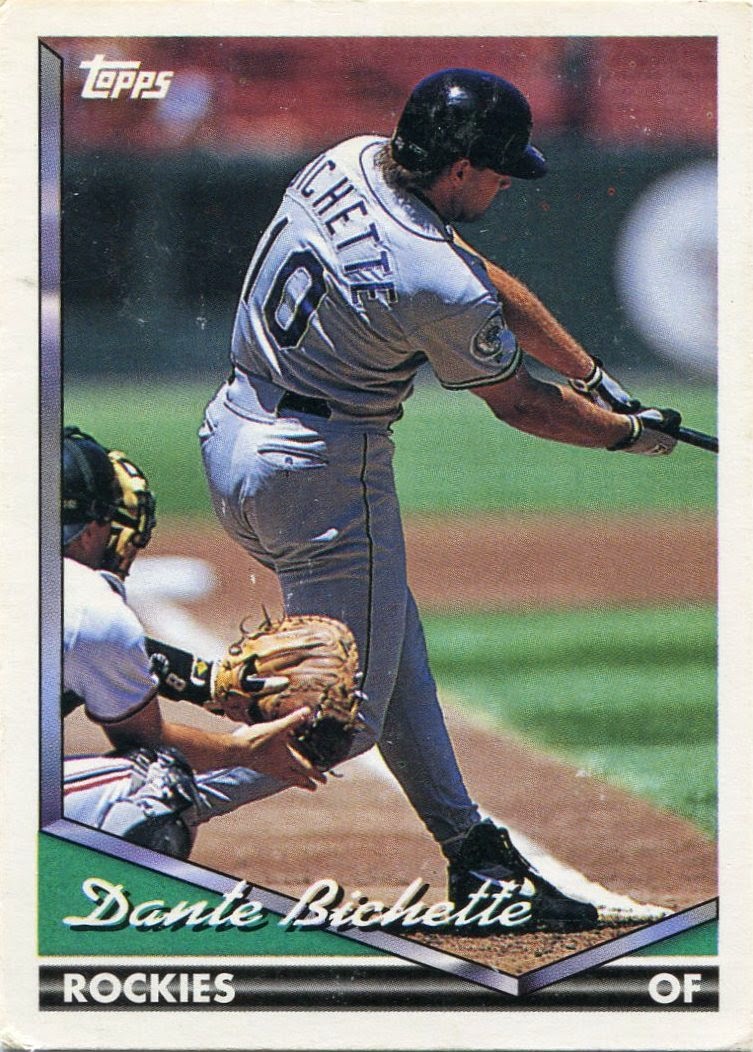 I like to think the voices of the masses didn't have an effect on my rankings, but maybe that's more of me thinking in the ideal rather than the real.

See, I've always liked 1994 Topps. A lot. But I seem to be one of the few. You won't get much more than crickets when if you mention '94 Topps around collecting circles. The hobby was in a massive free fall at the time, and the set just so happened to be released the same year as the infamous player's strike.

More than perhaps anything else in the Topps catalog, I think 1994 Topps suffers from "Wrong Place, Wrong Time" syndrome. Not a lot of people were paying attention in '94, which means that this set is overlooked most of the time.

The photography is solid, and the design is nice and simple. I especially enjoy the home plate-esque borders. 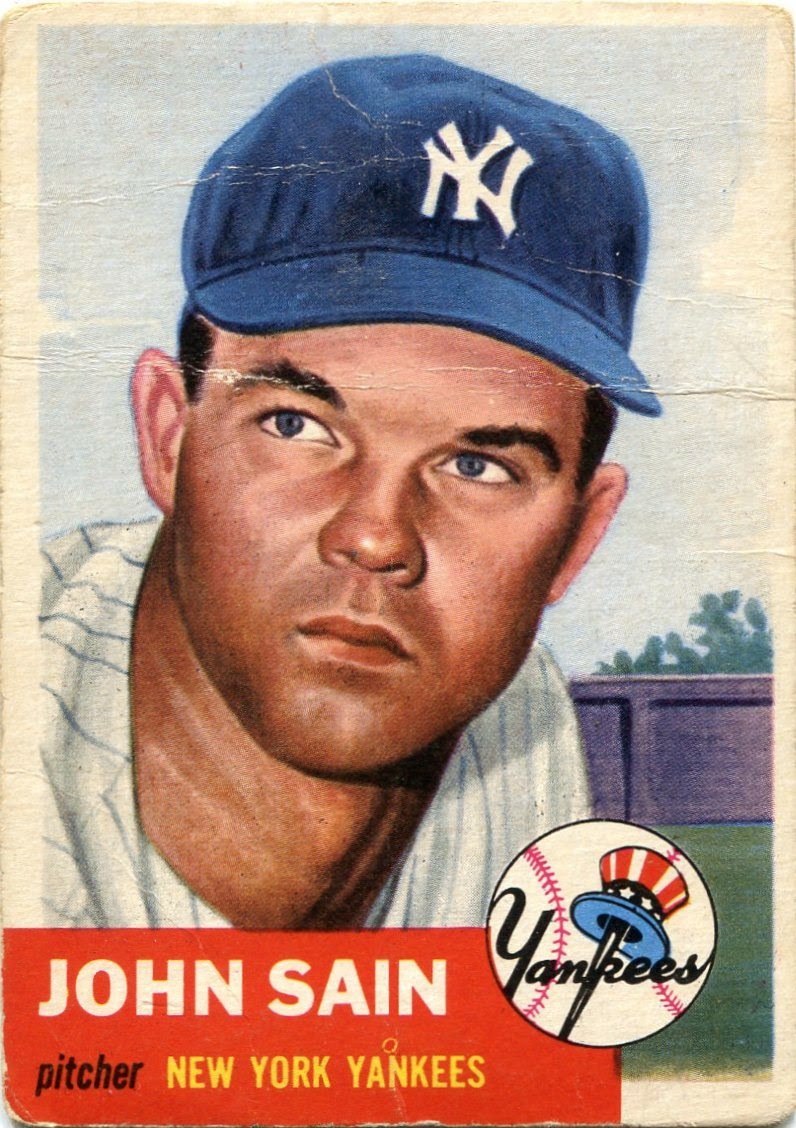 I don't know what happened here.

If I had to guess, I think the sets surrounding 1953 Topps suppressed it a bit. I mean, you have the legendary-ish '52 Topps design, and then a bunch of other personal favorites spread throughout the rest of the 1950s. Maybe I didn't give '53 Topps its fair due.

Sure, if you look at it in comparison with the rest of the '50s Topps sets, maybe it comes up a bit short. But I think '53 Topps is a good deal better than other modern releases like 2013 Topps (which came in at #28 on my original countdown).

A quick look at any of the cards in this set will show you the incredible amount of care that went into each meticulously hand-drawn painting. That has to count for something.

We're only a little more than a month removed from my final post in the Topps Countdown series, and already I'm overcome with second guessing. I can only imagine how much things'll change a whole year from now.

Check back in March 2016 for even more second guessing from yours truly.
Posted by Nick at 6:31 PM

I've never been as big of a fan of '52 Topps as most of the community seems to be either. But, I think that's more of a result of my distaste for non-standard sized cards. My OCD can't always be suppressed.

I've always felt like a lone voice in the wilderness because I never cared much for 1952 Topps. Take away the Mantle Rookie and do you really have a top 20 set? Not in my opinion.

To me the 53 set might make the top ten