Franchise Flashbacks, all in one 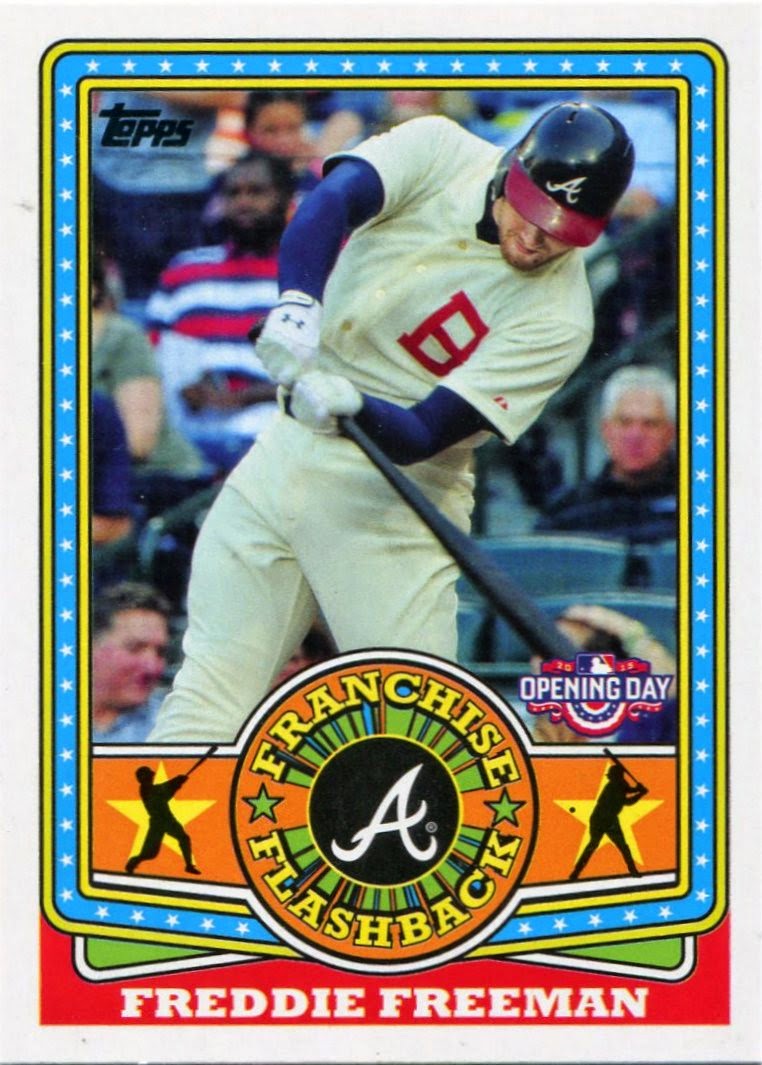 Even though I wasn't all that excited by this year's Opening Day checklist, the Franchise Flashback inserts were a huge hit with me.

An all-throwback concept couple with a groovy design was enough for me to label it as the Insert Set of the Year. I stand by that statement, mainly because these Franchise Flashbacks got me to do something I've never done before. I went and bought the entire 20-card set on Ebay for a tick under seven bucks, shipped, which I thought was a heck of a steal. (That's 35 cents per.)

Because of how much I love them, I wanted to give each and every insert a share of the spotlight on this blog. I just wasn't sure how to do it. In the end, I decided that these are the types of cards that speak for themselves, ones that don't need a whole lot of commentary.

So, here tonight, for your viewing pleasure, I am ecstatic to present 2015 Opening Day's "Franchise Flashbacks" insert set in its entirety, starting with Mr. Freeman above. 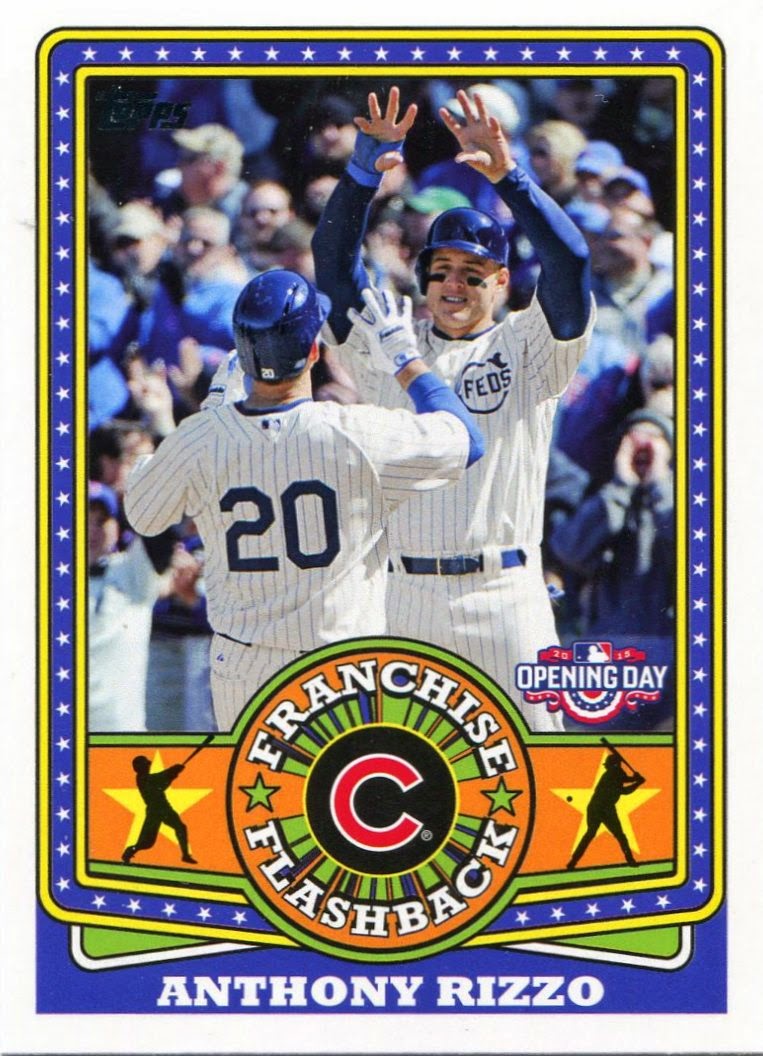 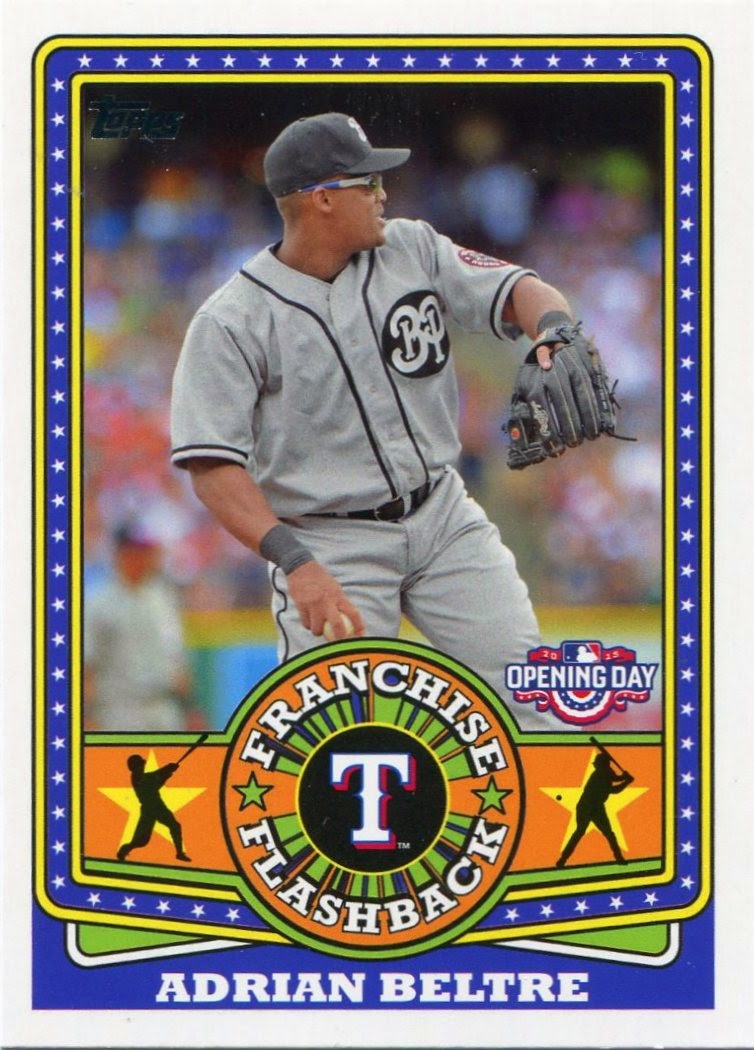 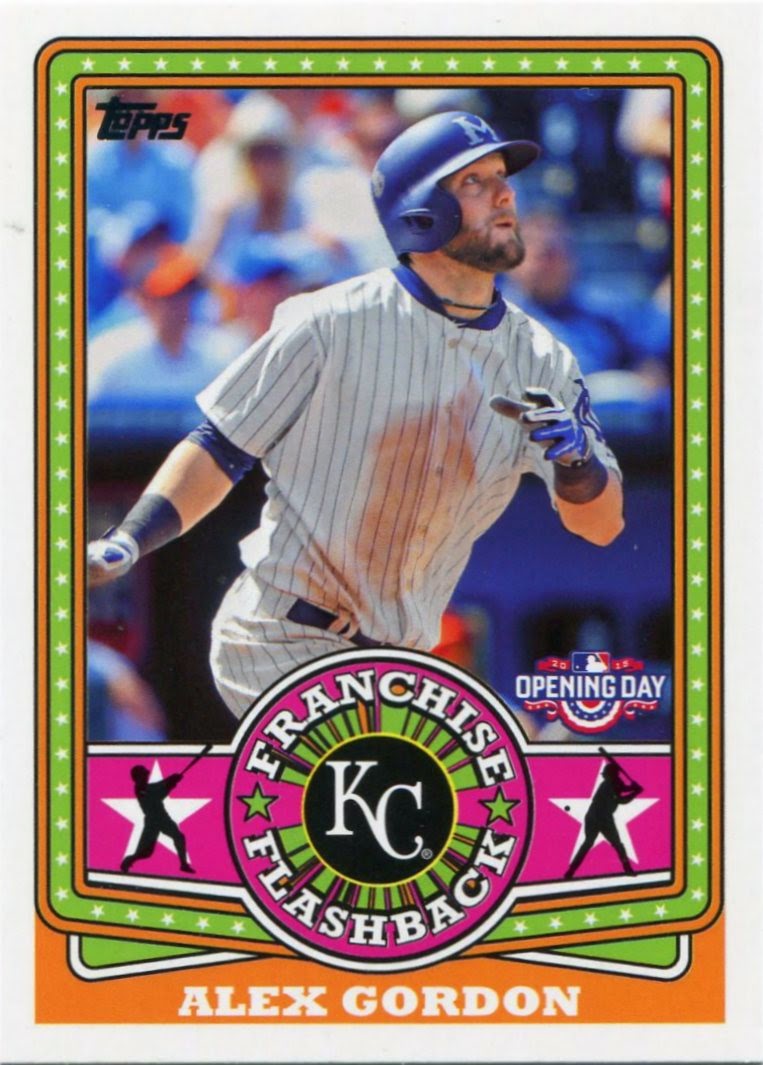 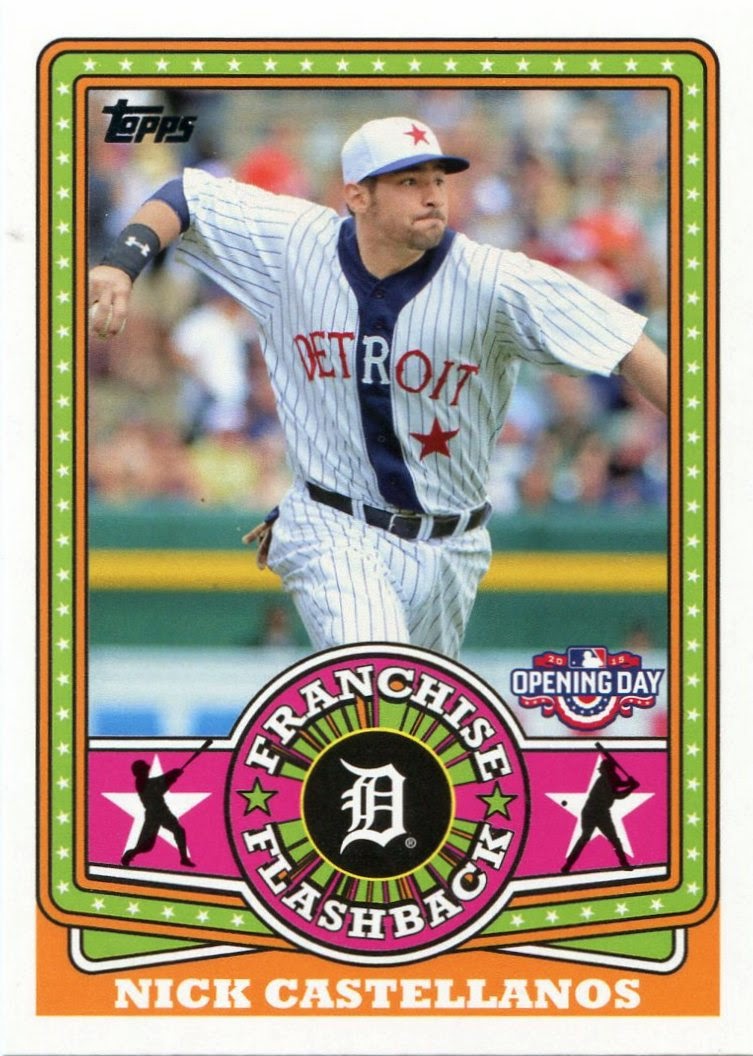 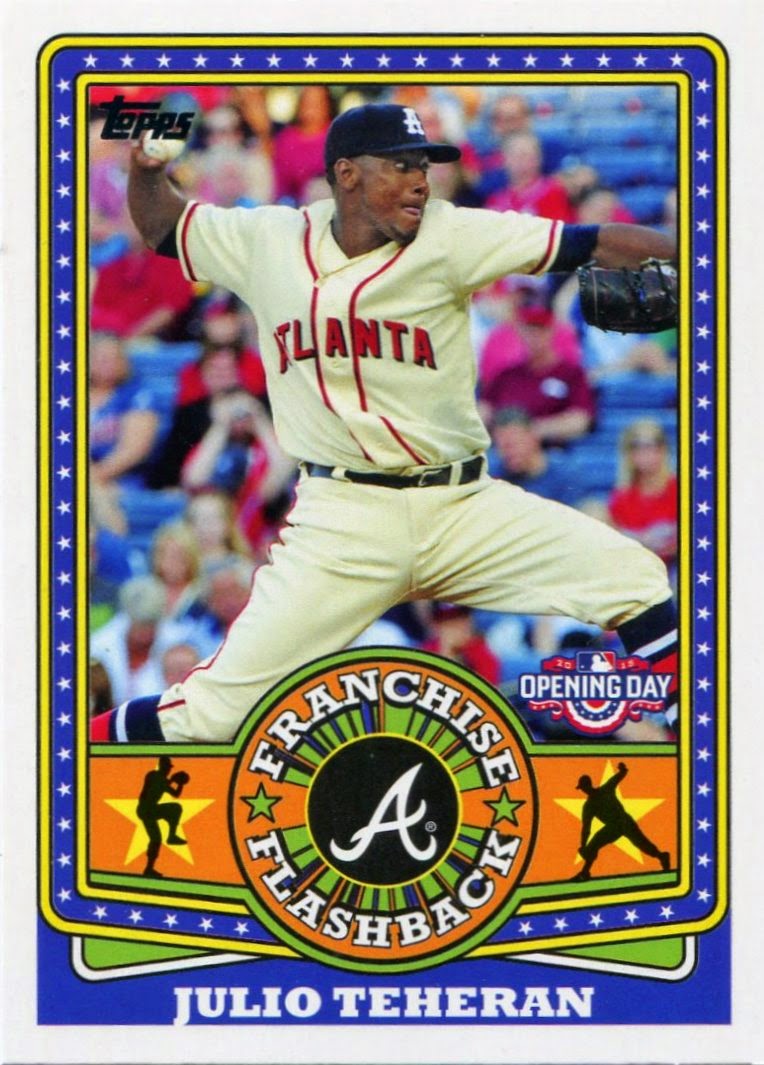 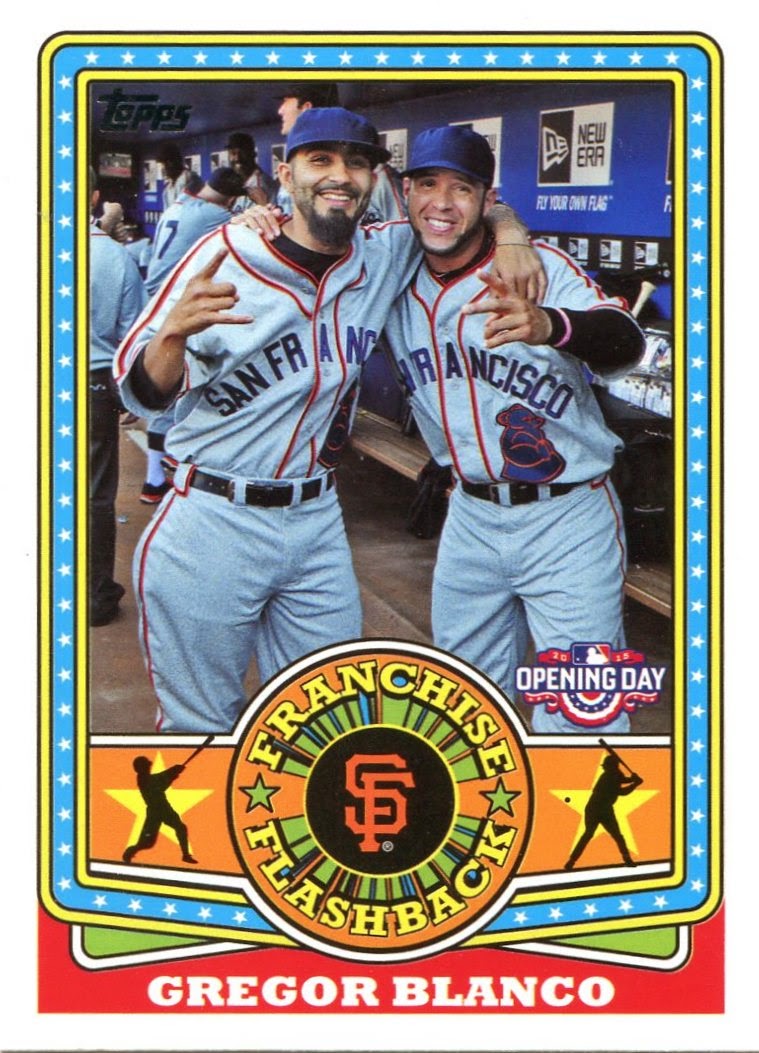 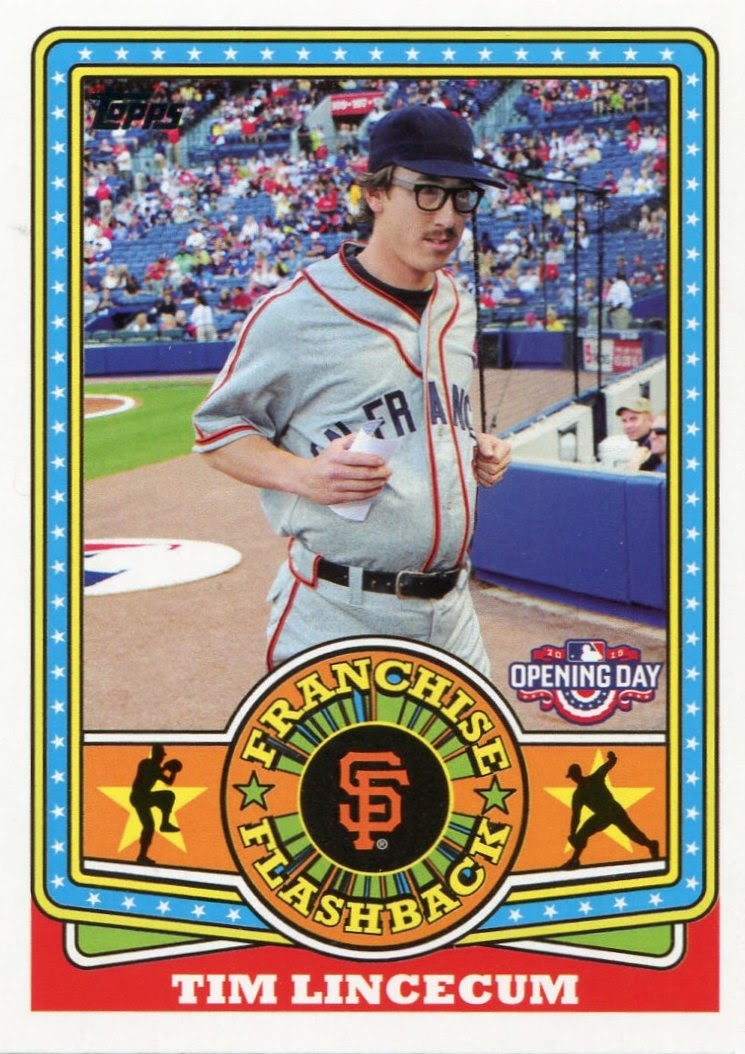 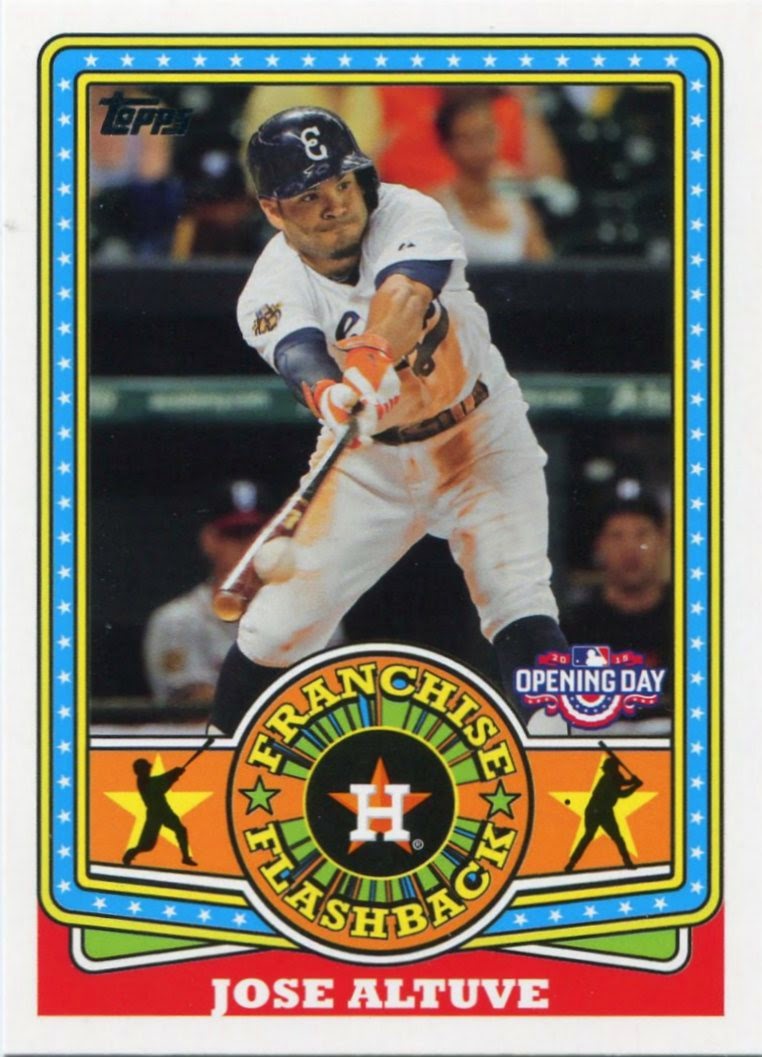 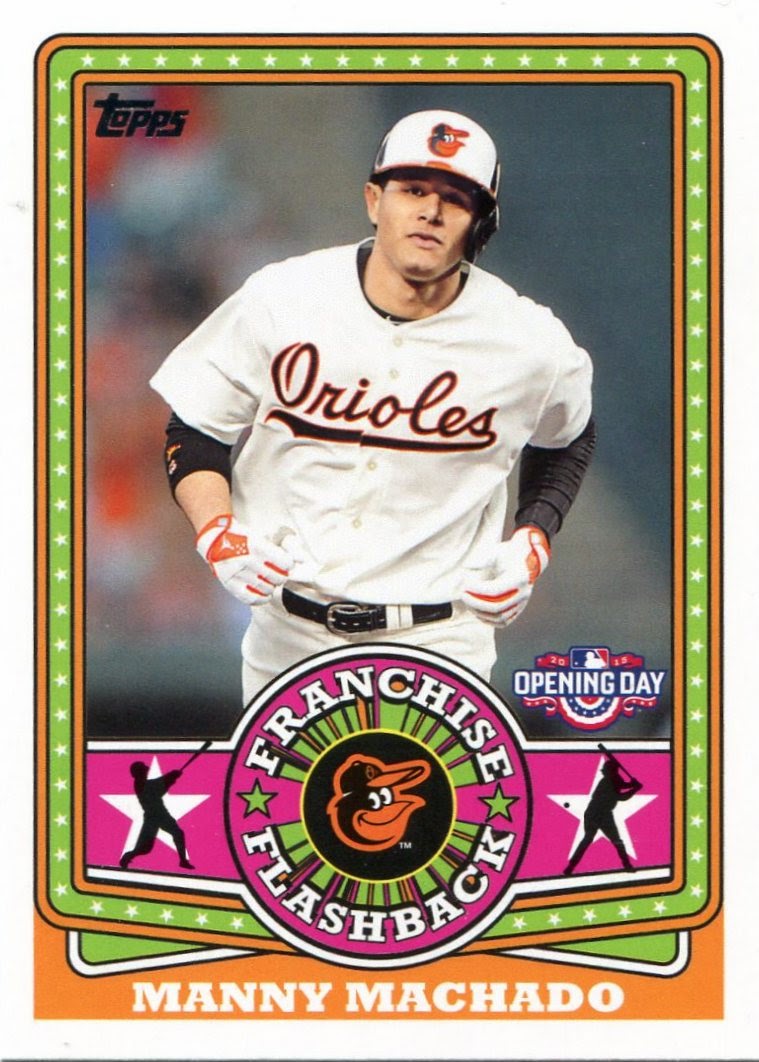 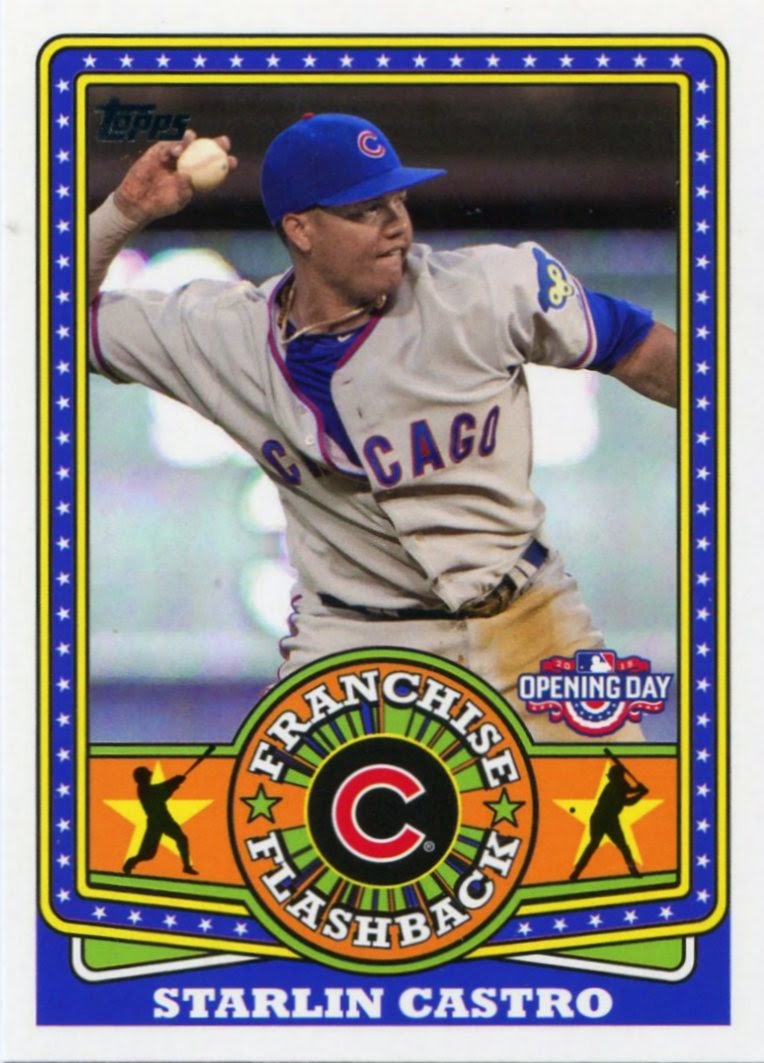 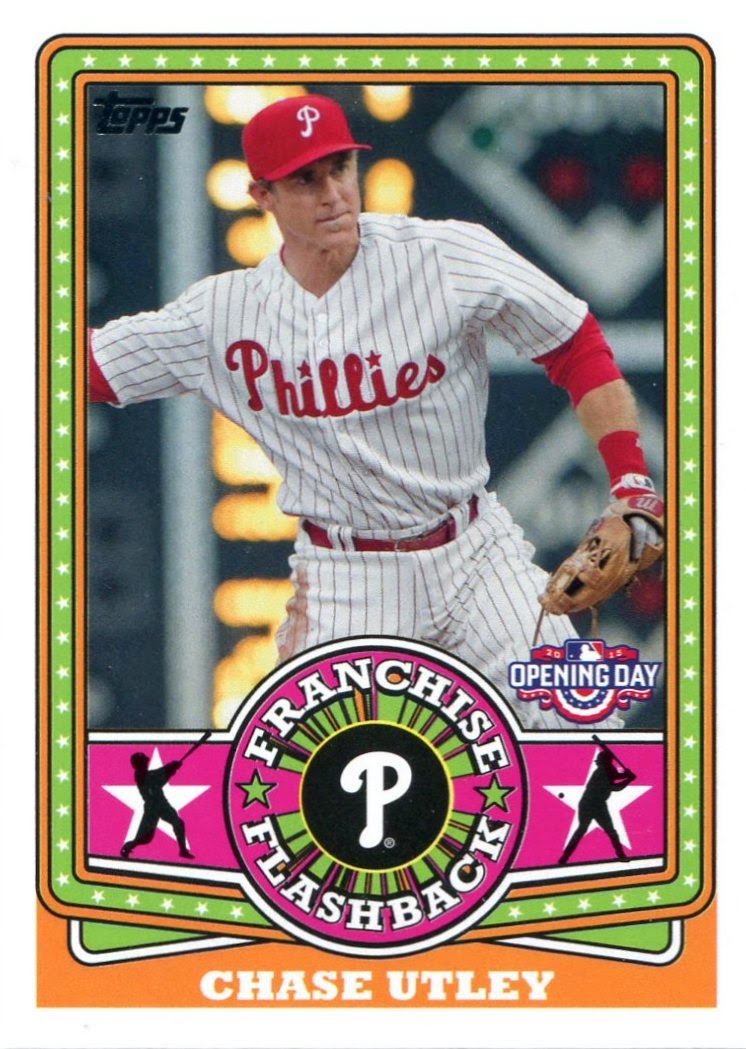 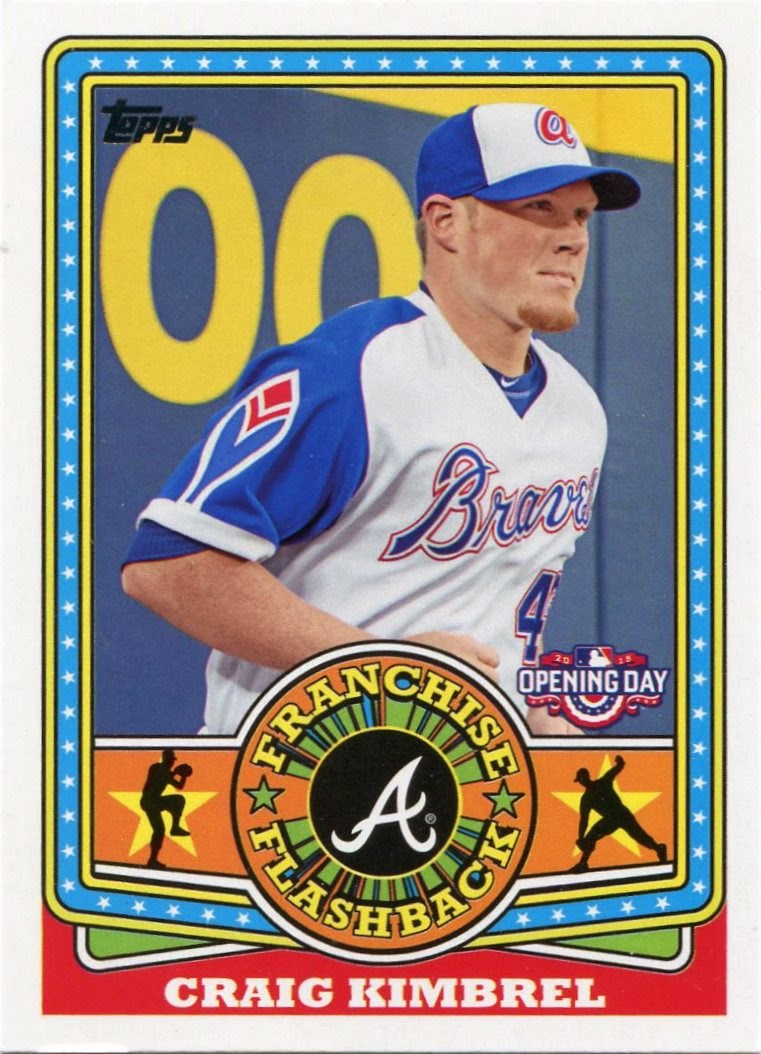 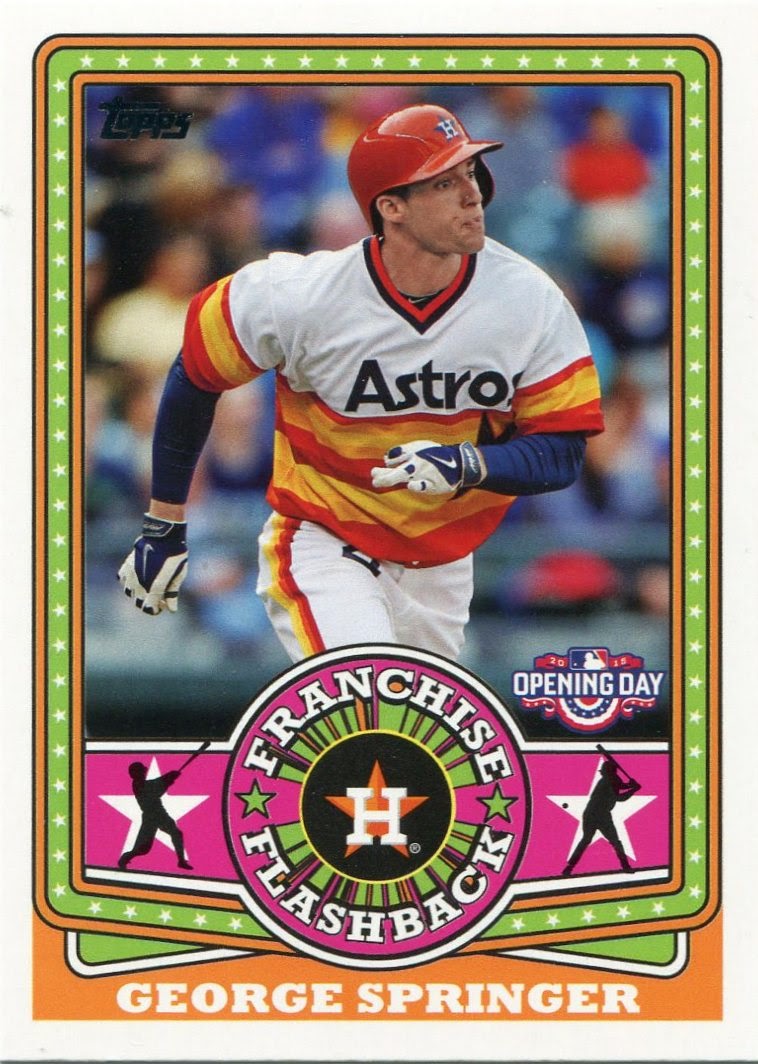 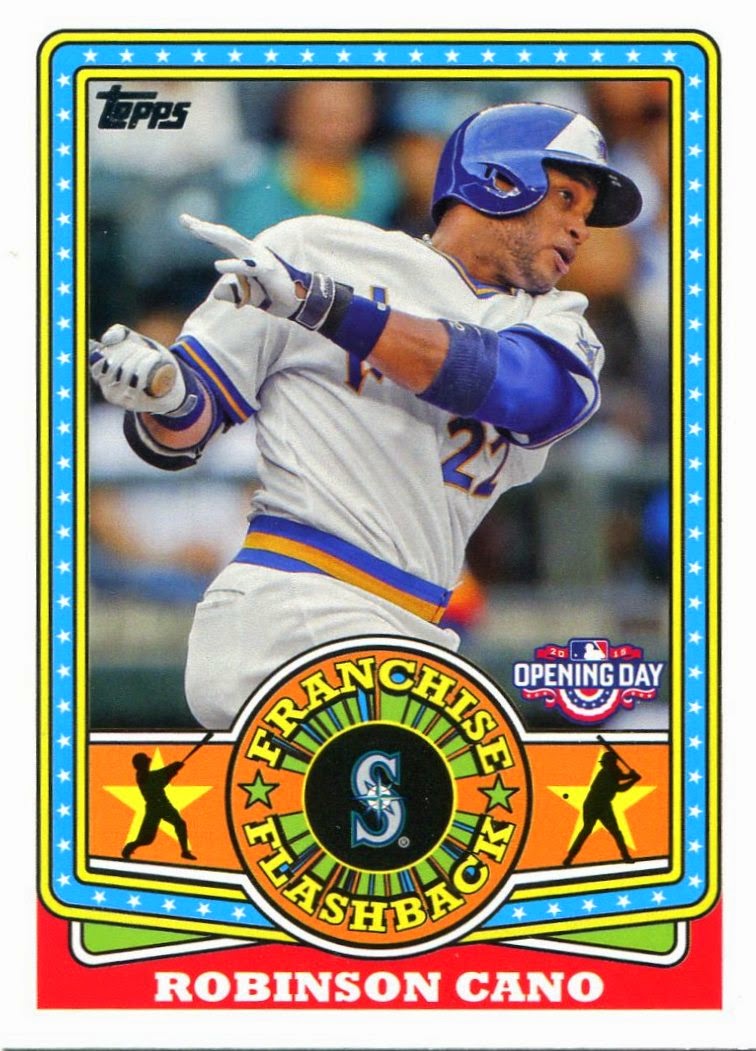 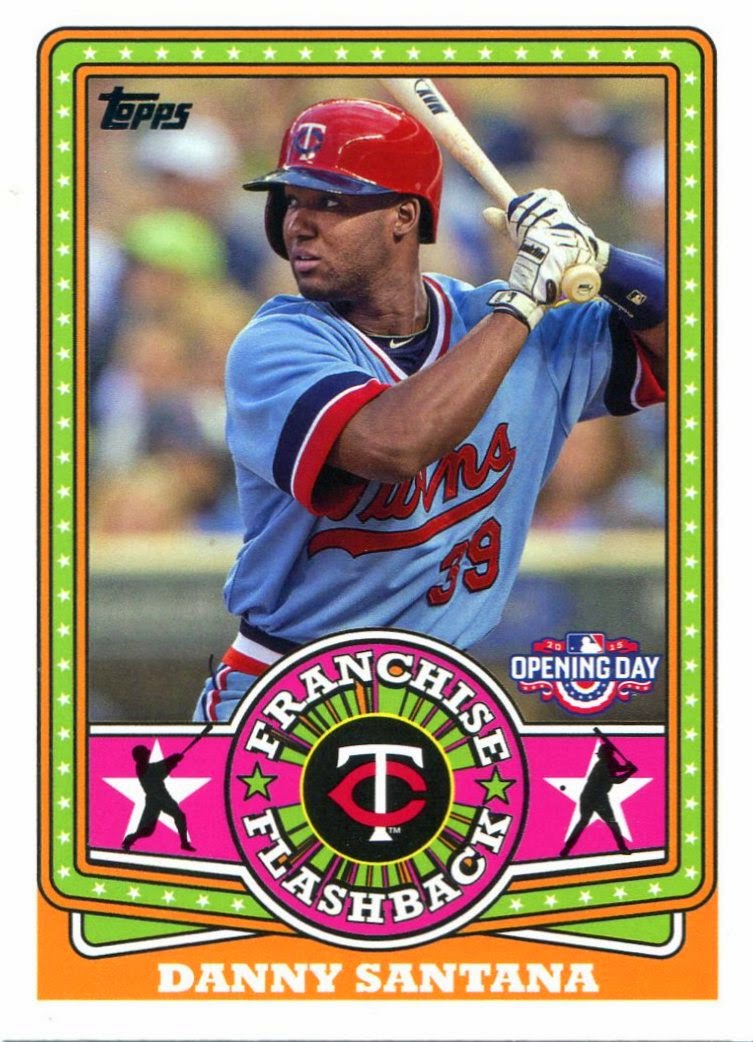 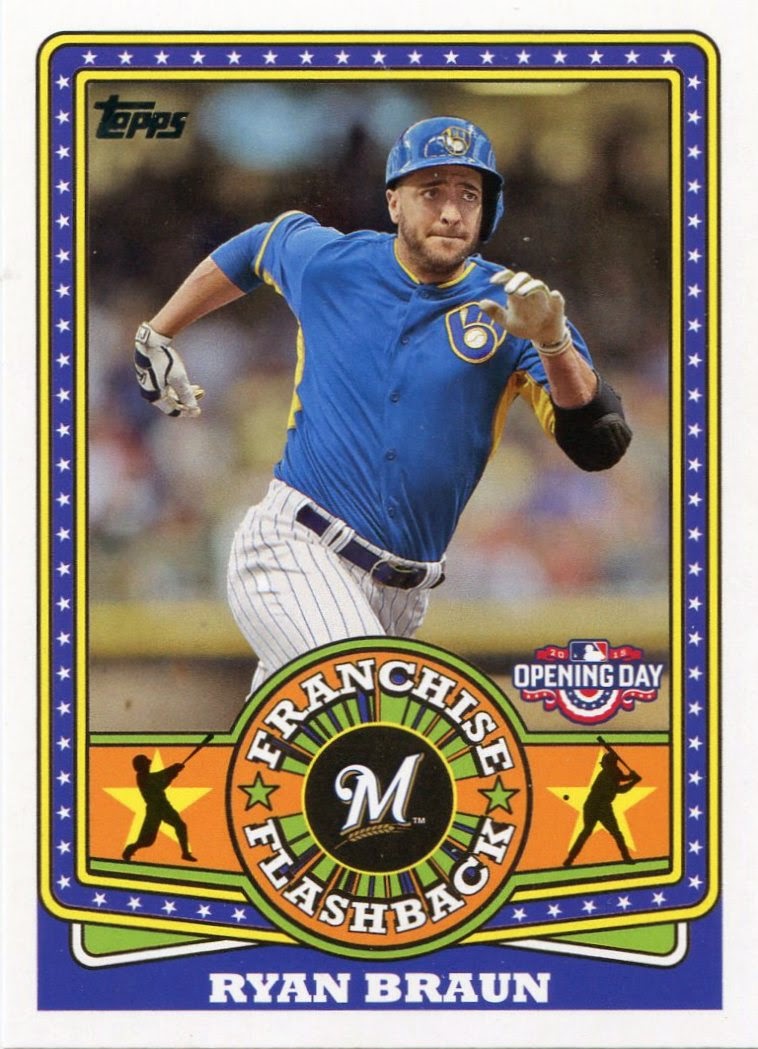 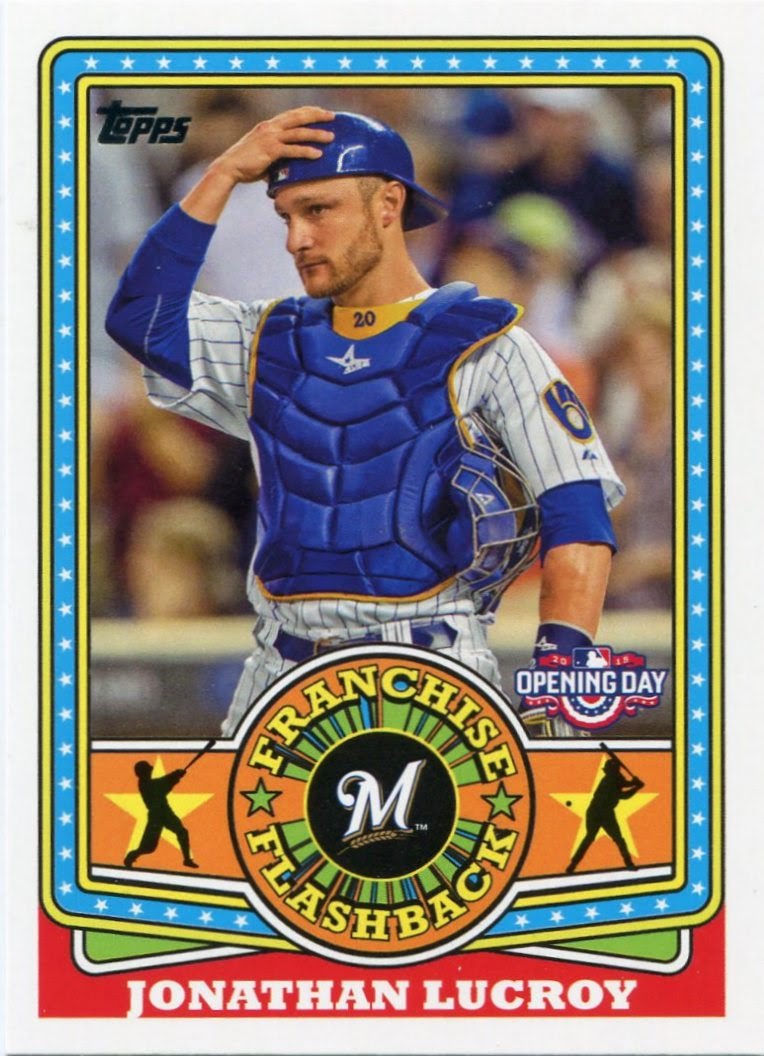 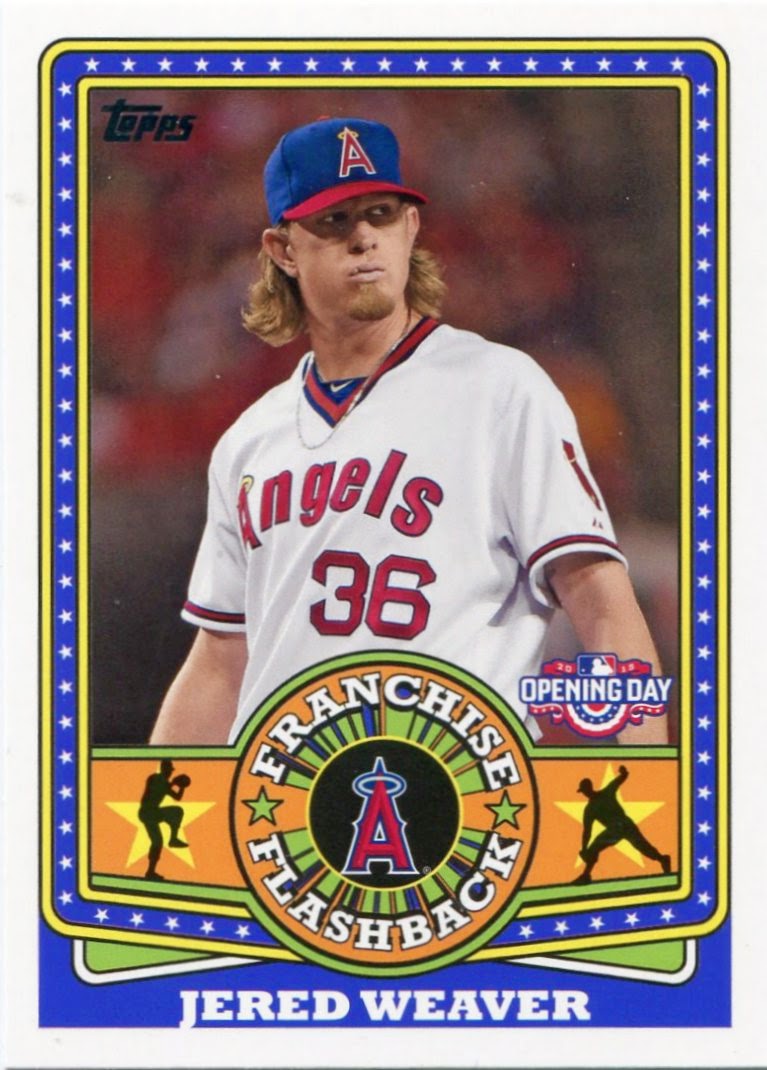 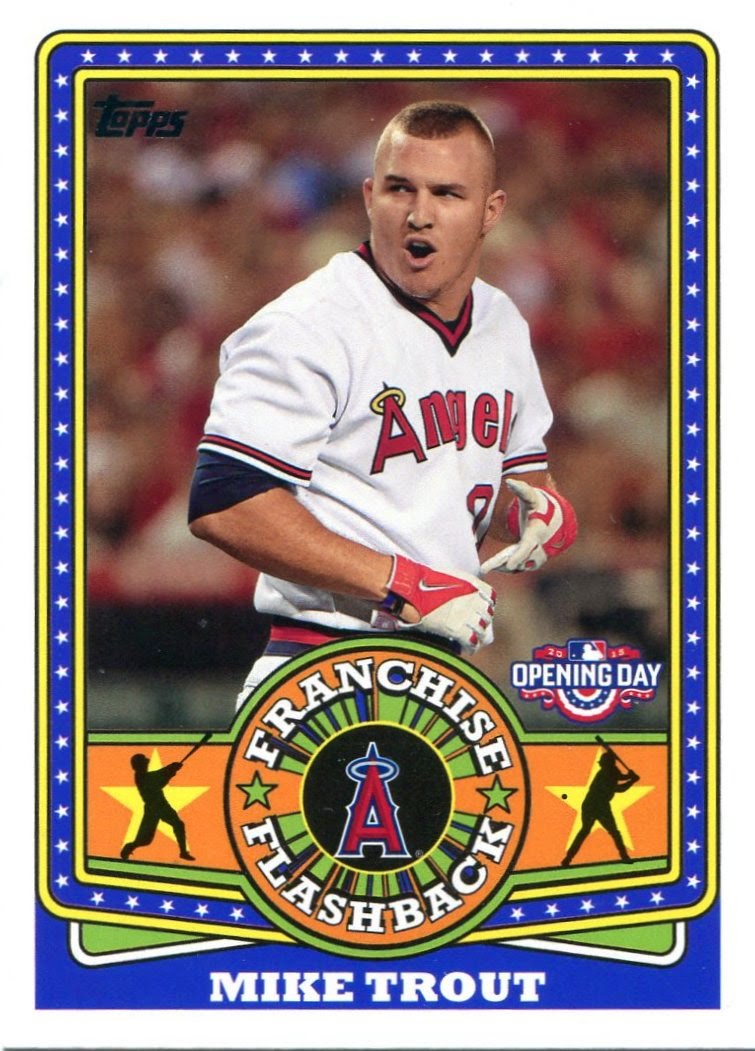 Favorite Card: Tim Lincecum, for the pillow over the stomach and the very Woody Allen-esque disguise.

Favorite Throwback Uniform: Chi-Feds all the way! (Close runners-up include the '64 Cubs and the Fort Worth Black Panthers duds. And I'd be remiss without mentioning the Technicolor Astros uniforms.)

Favorite Aspect of the Set (besides the uniforms themselves): Most cards have precise info on the back regarding the specific details of the throwbacks in question, which helped with obscure squads like the Houston Eagles and San Francisco Sea Lions.

What I Could Do Without: I don't know that repetition of a few teams' throwbacks (Giants/Sea Lions, Brewers, Angels) was necessary, but this is a pretty air-tight insert set otherwise.

Best Non-Lincecum Photo Choice: Gregor Blanco, because dugout shots are all but extinct in today's hobby.

Is It Still the Insert Set of the Year? You bet!
Posted by Nick at 6:02 PM

I'm ecstatic that there are 3 Braves in the set of 20. Now I can't wait to get me some.

That's a really great set, thanks for sharing Nick! I think I need to put it together as well(or buy the entire thing).

Phenomenal set! That Lincecum is the true gem if you ask me; he's like Paul Reuschel reborn! With the prevalence of throwbacks in today's game, this collection was long overdue.

I have to agree - these cards are groovy! That several honor the Negro Leagues helps create a fantastic set for collectors of a historical bent. I too picked up the set a few days ago, for just under $7 shipped. For me - 79 Astros, Detroit Stars and Atlanta Black Crackers.

That is a great insert set! The '79 George Springer card is my favorite. I love the old Astros uniforms.

Well executed set! I agree with Anthony about the Lincecum. Paul Reuschel!

That set should have been nothing but '70s uniforms. Disappointed.

I really like the Craig Kimbrel Brave's uni as well as the old Astros and Mariners jerseys. Great post.