As I've recently mentioned, I've been having difficulty connecting with my cards lately.

However, I'm happy to report that the collecting clouds are clearing up. I've been on spring break this past week, which has allowed me to spend a bit more time with my cards as of late. Catching up on some much-needed sorting and organizing is always a pleasure.

On a more selfish level, I think one of the big things that has inspired me is the fact that people still send me cards on a consistent basis. I really haven't been sending as many packages/PWEs as I feel I should have over the past few months, so it feels like a one-sided affair. (Although I plan on rectifying that soon.)

Take Adam of the terrific blog "Infield Fly Rule," for instance. He's hit me with a couple flat-rate boxes as of late, and I finally got around to sending him a Rockies-centric package a little while ago. So what did he do? Send another flat-rate box o' cards, o'course.

This Mark Grace rookie from Adam's selection stuck out like a sore thumb, in that I couldn't believe I didn't already own it.

Thanks for saving me from that massive oversight, Adam. 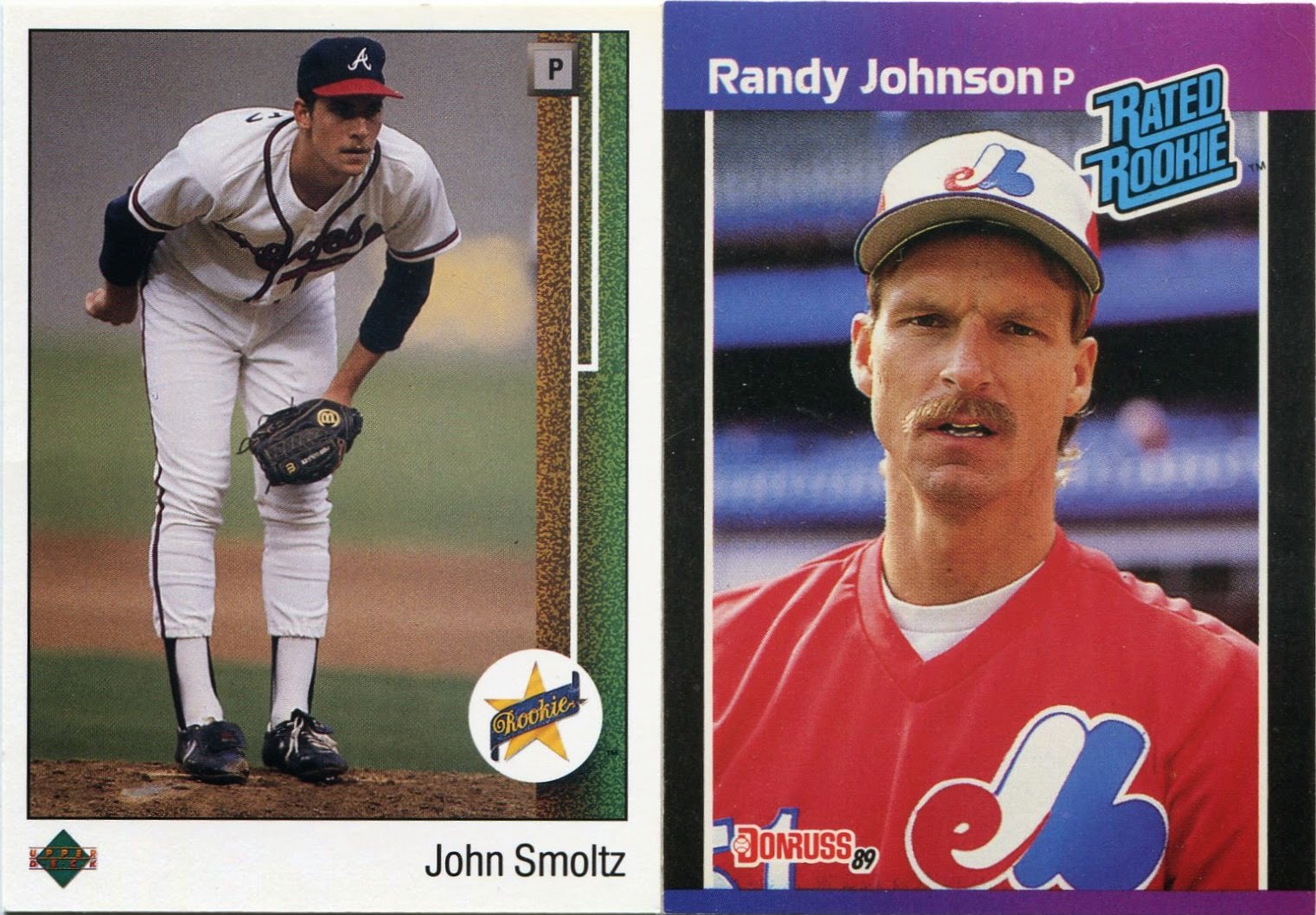 Adam crafted a bit of a Hall of Fame theme around this latest flat-rate box.

I found a bunch of cards of some of Cooperstown's newest inductees, a batch which included rookie cards of both John Smoltz and Randy Johnson.

I wonder what that poor Donruss photographer did to make the Big Unit so pissed off. 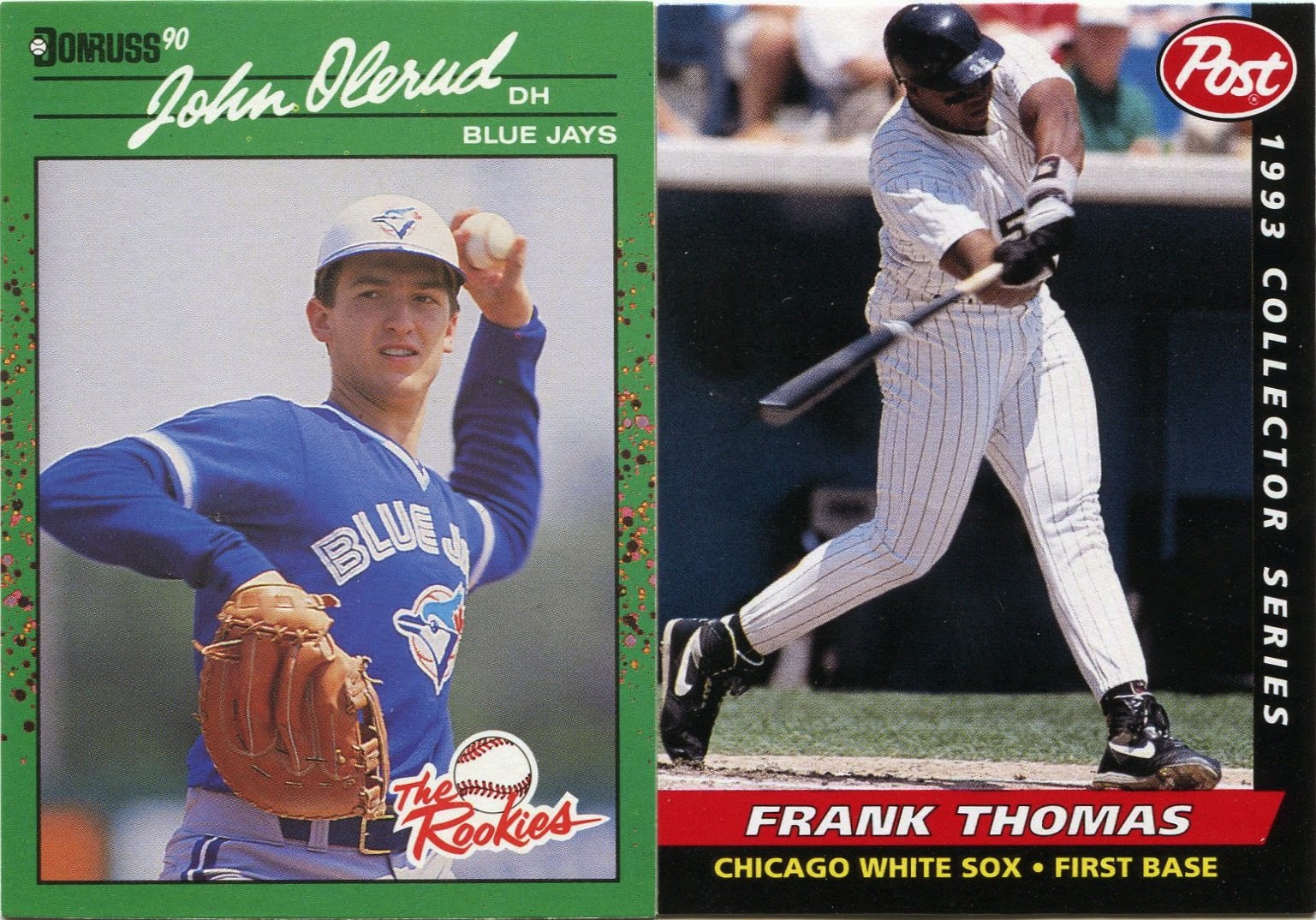 Adam didn't skimp with the oddballs.

I love cards of John Olerud. I love green borders. But I still hate 1990 Donruss.

At this point, I don't think anything in the whole wide world will ever get me to appreciate that monstrous design. 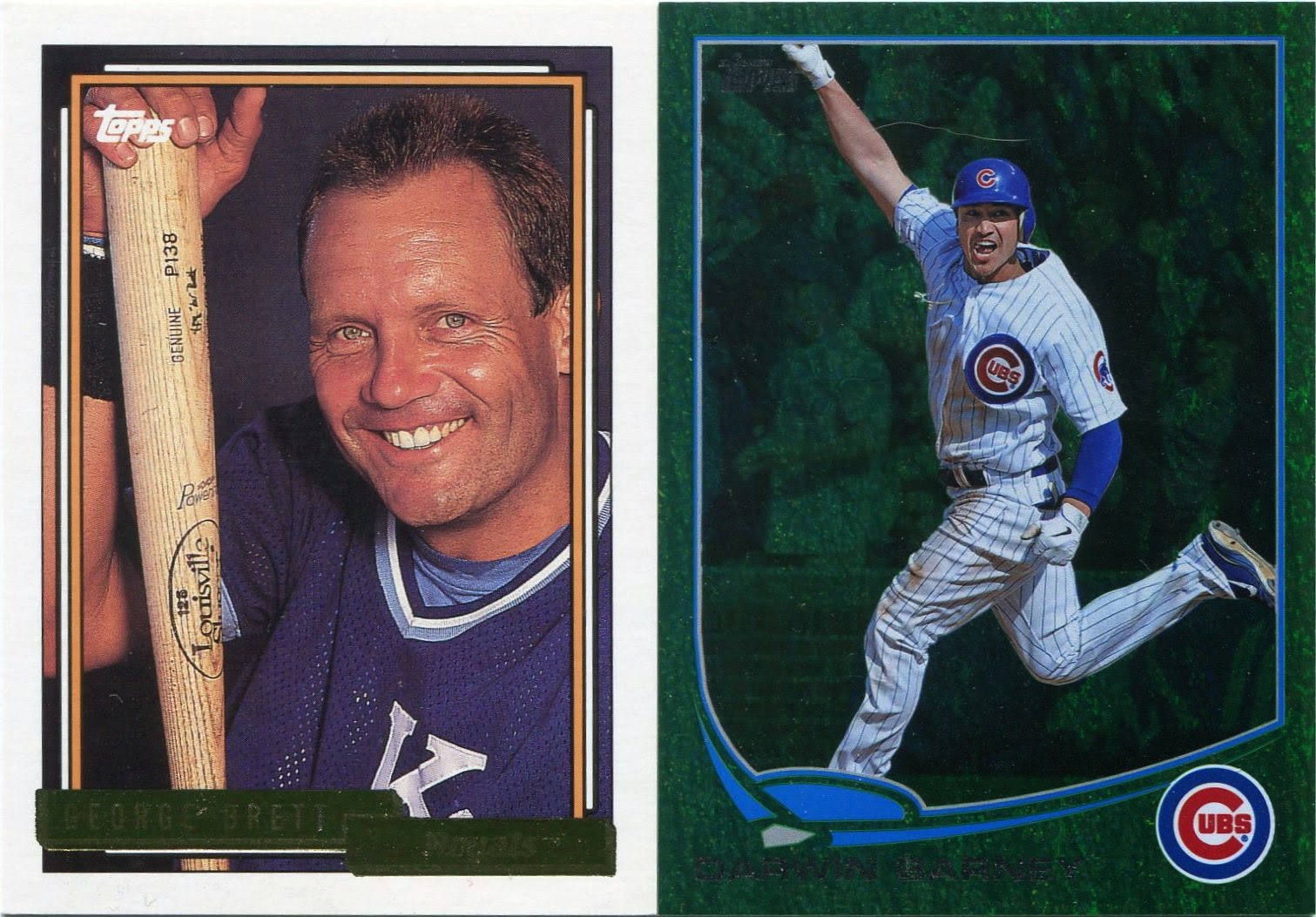 They've been around since I was born, way back in '92. 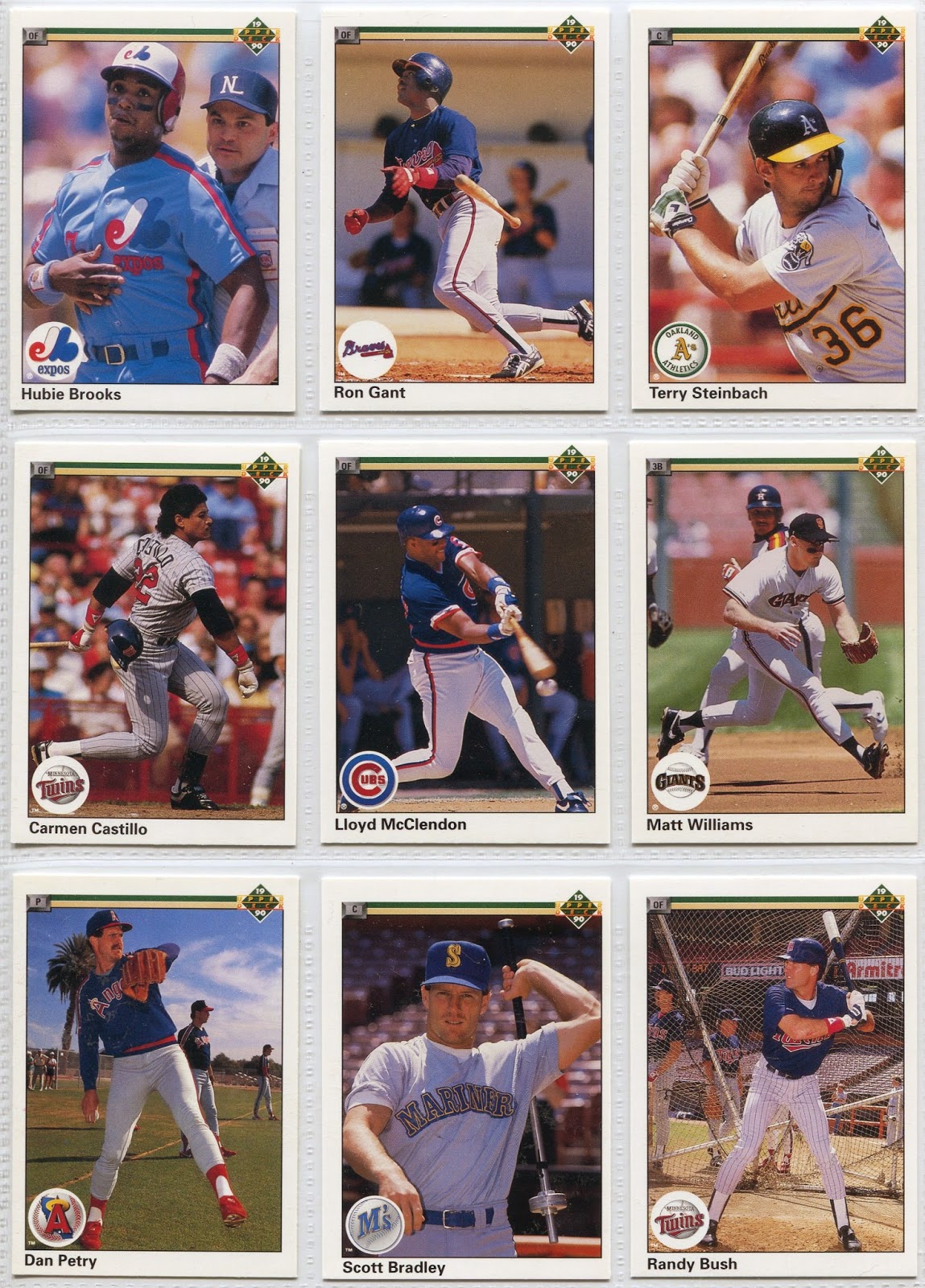 I think I receive more early '90s Upper Deck in trades than any other era of baseball cards.

They're common, they're cool, and a lot of them are prime mini-collection hits. Because of how eager people are to unload them, I own north of a dozen copies of certain early UD cards. My doubles boxes are packed with them. Sometimes, I think the early UD well has dried up.

But then someone like Adam comes along and shows me that there are still gems left to discover. All nine of these singles from the 1990 Upper Deck checklist were new me, and each of them are quirky enough to earn the spotlight on this blog.

Far from junk wax, I think. 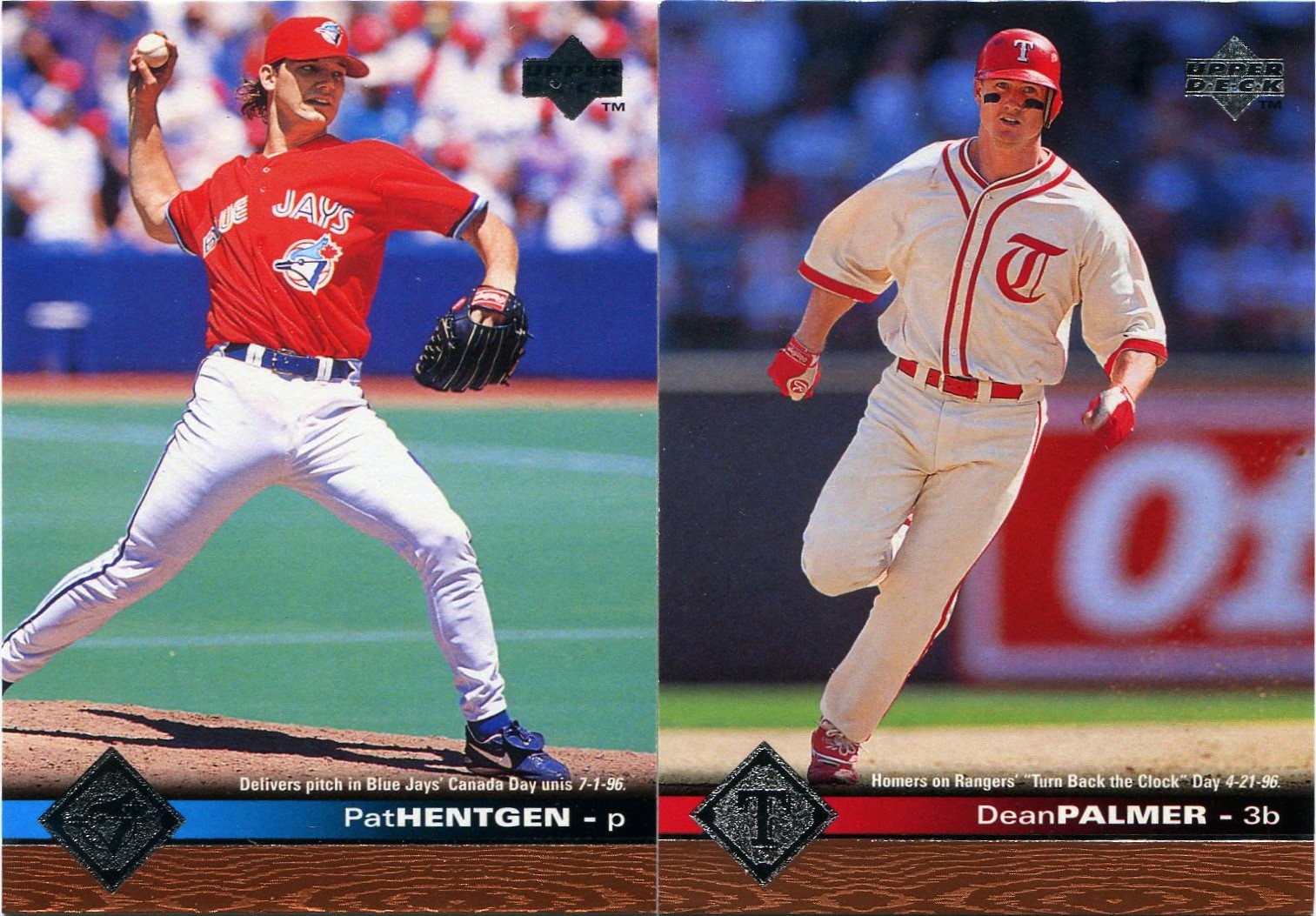 I don't kid myself when it comes to Upper Deck's later '90s checklists.

I know I've barely scratched the surface with those. They don't show up as often in trade packages, although I'm ecstatic to have any people can spare. As you might guess, the uniforms steal the show on these two.

Canada Day red and Rangers faux-backs are tough to beat. 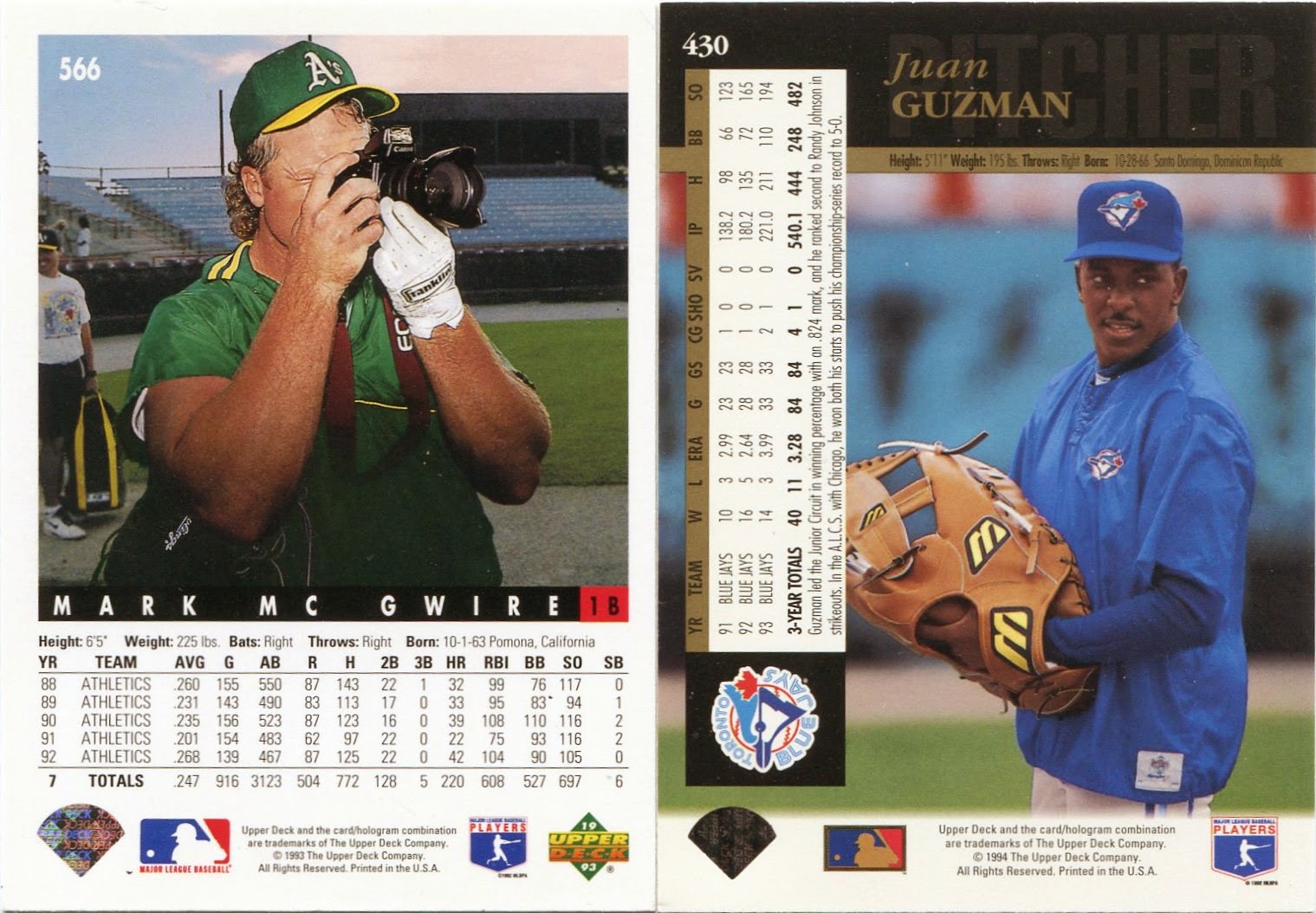 More than any other brand, Upper Deck recognized that backs could be fun, too.

I'll bet cameras like that were the cream of the crop back in 1993. 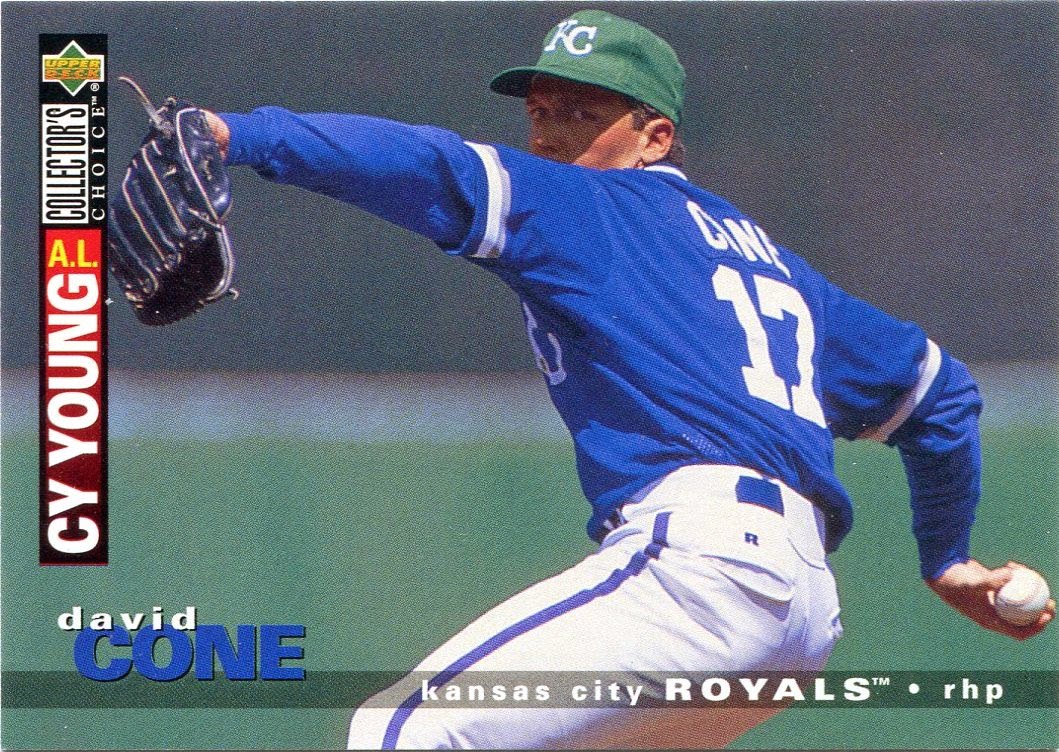 A card like this would've been perfect to feature on St. Patrick's Day. Missed it by four measly days.

No matter. This card of Mr. Cone is fantastic on any day of the year, as it's one of the extreme few I've seen to feature those green caps some teams don on March 17th Spring Training games.

The fact that Cone wears #17 is quite serendipitous as well. 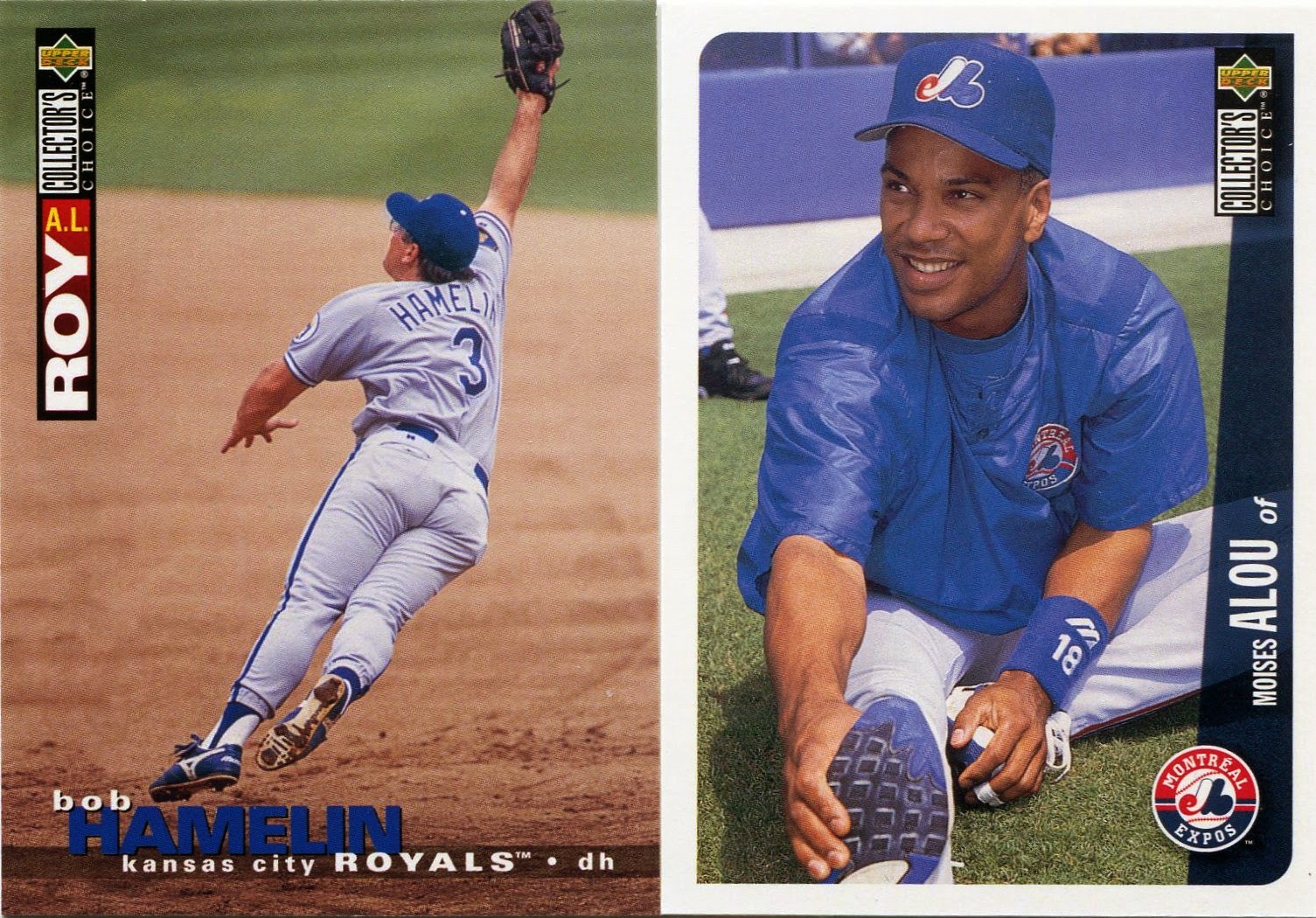 Collector's Choice as a whole is a wonderful brand.

I think I've made that pretty clear during the first three-plus years of this blog's history. 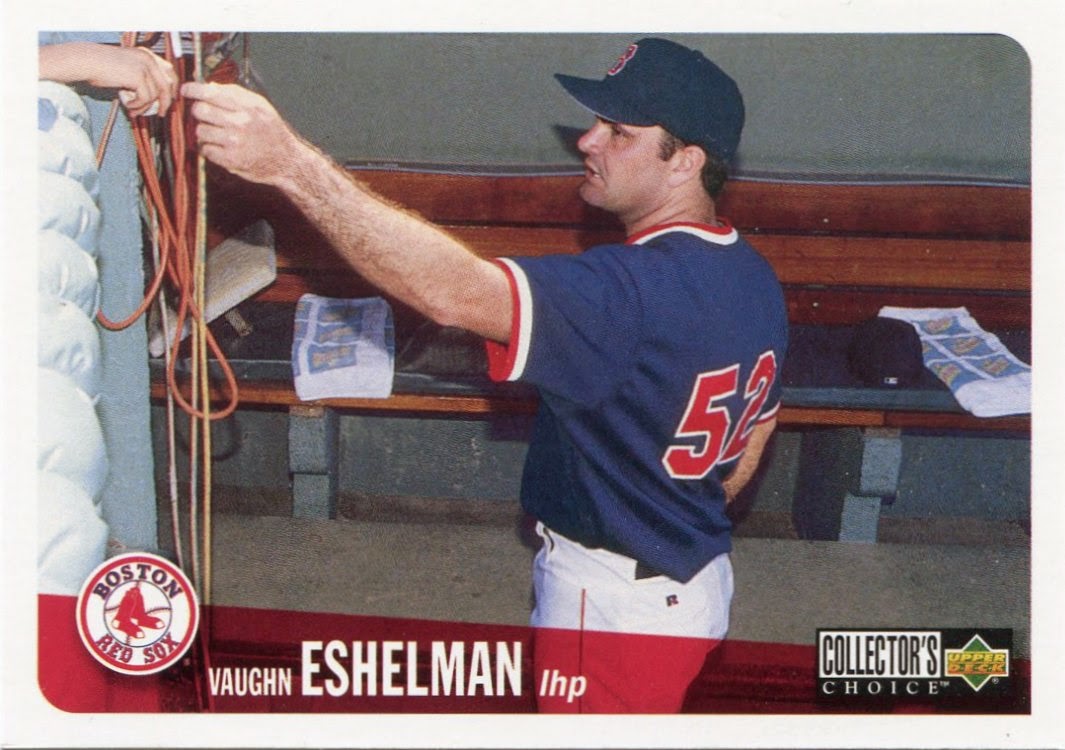 A flat-rate box of this magnitude is bound to include a few mini-collection nominees.

Much like early '90s Upper Deck, Collector's Choice is an absolute goldmine for bulking up my many themes.

I always wonder if the fans on cards like these still have their autographs from the Vaughn Eshelmans of the baseball world. 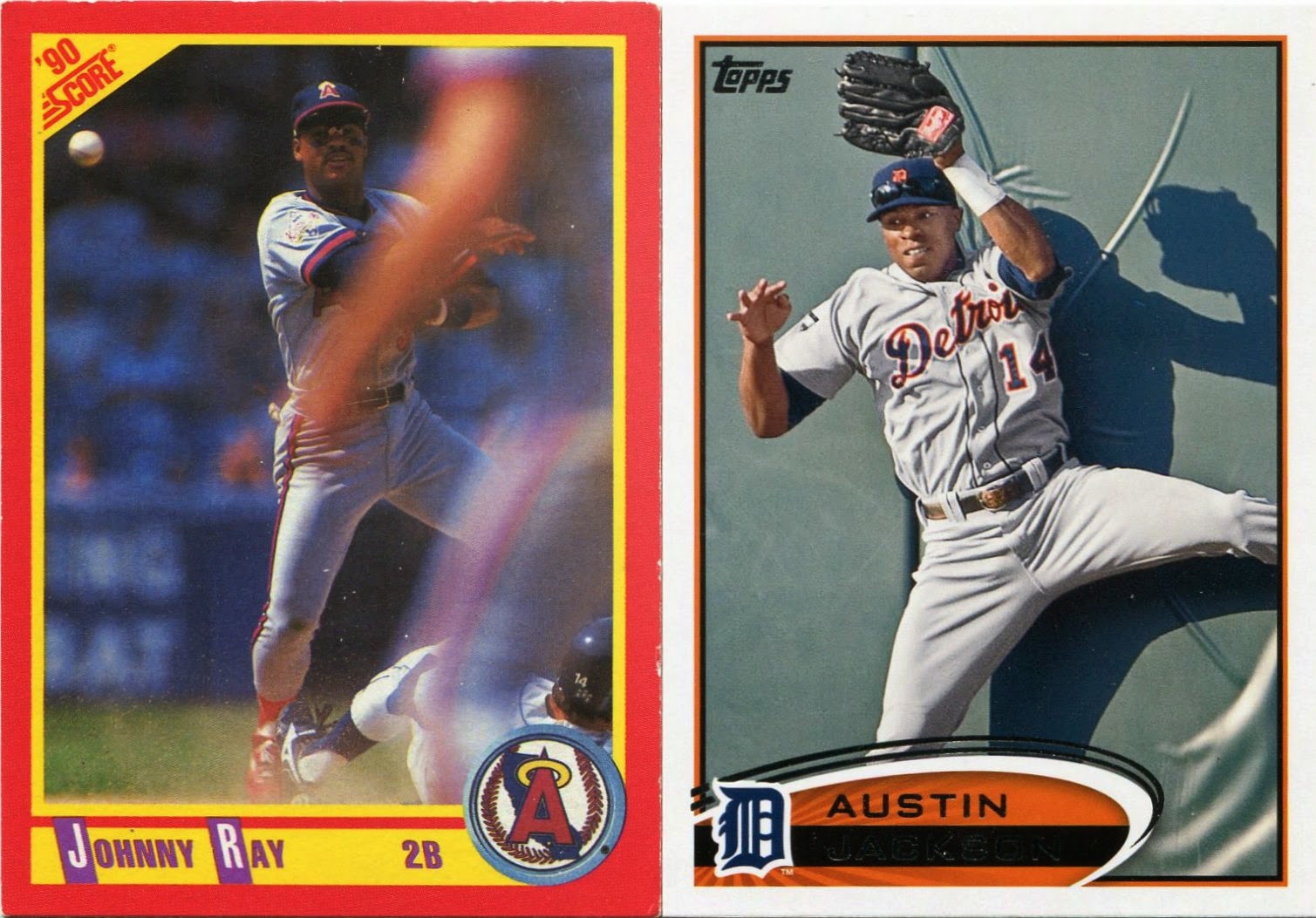 A couple for my "double dip" and "at the wall" mini-collections here.

That Johnny Ray has to be one of the strangest double play cards I've seen. It took me a minute to realize that it was a double dip with the first baseman's fuzzy arm and mid-torso blocking the shot.

Why Score chose to go with an image like that is a mystery. 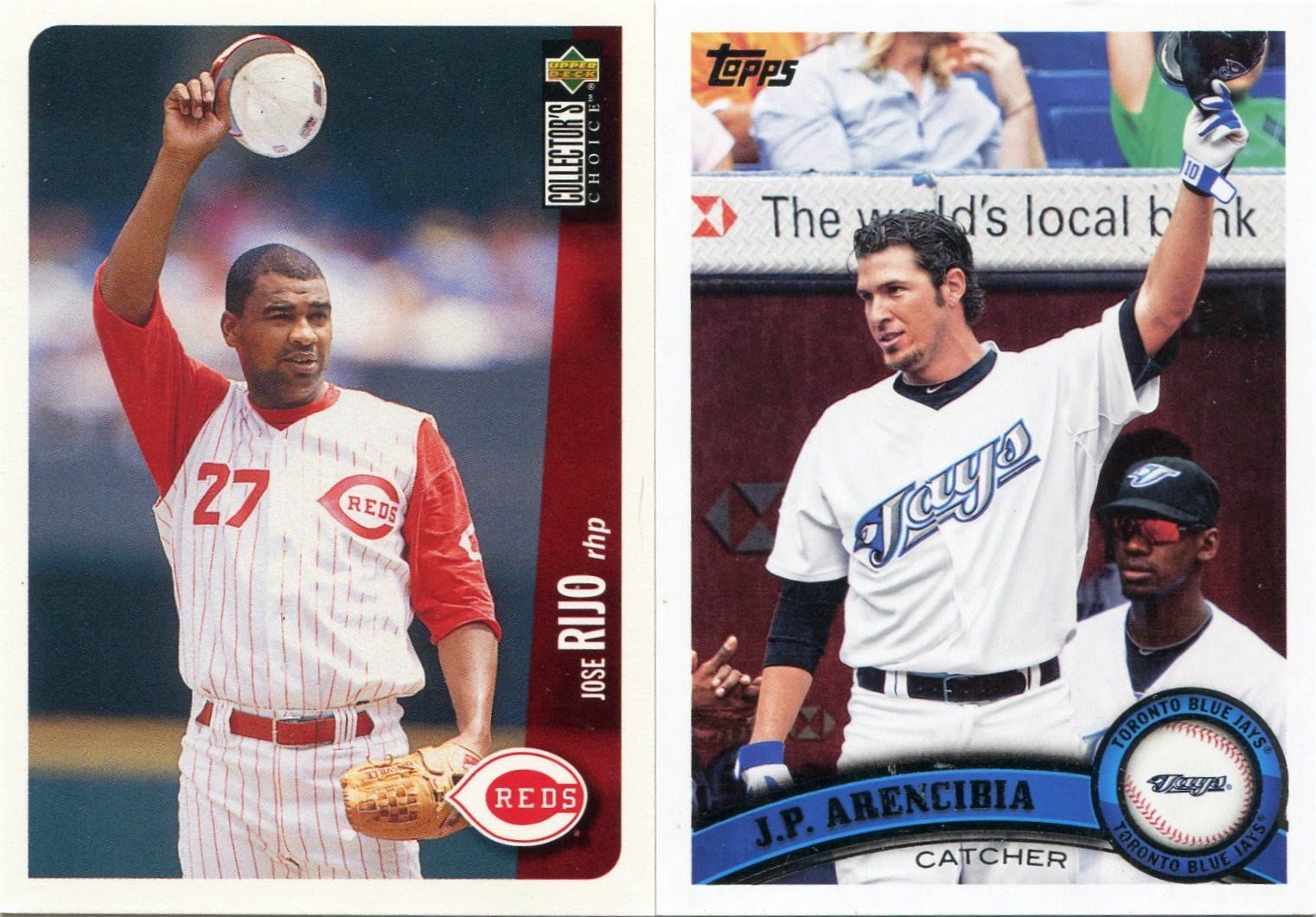 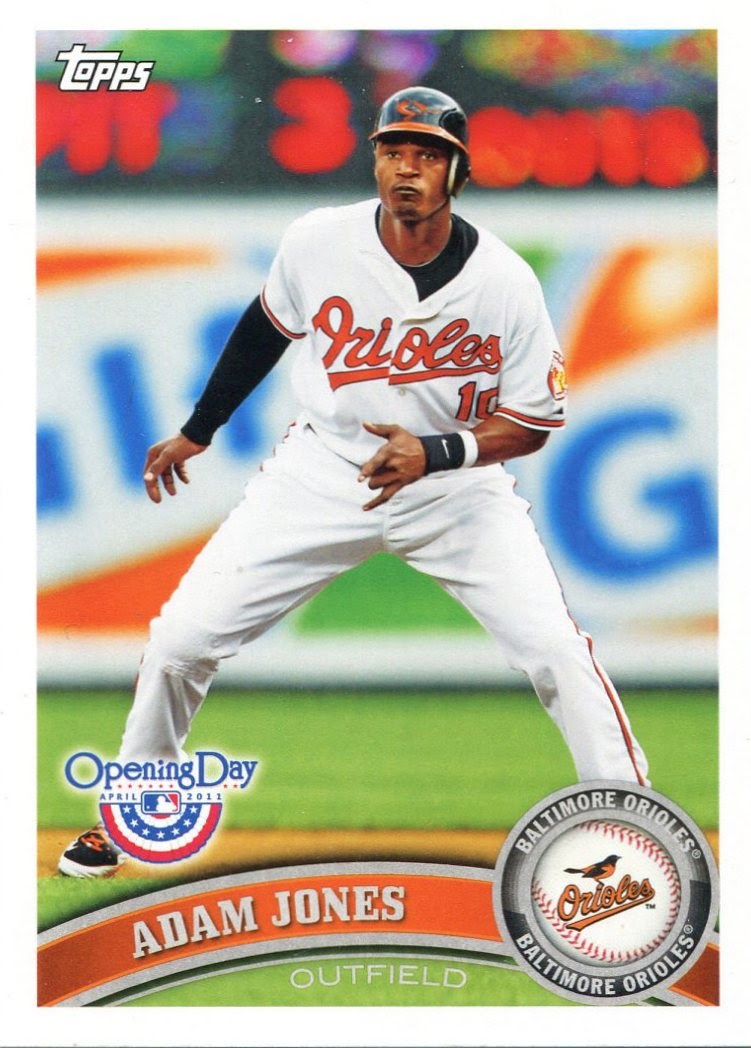 As if all the various goodies in this flat-rate box weren't enough, Adam even inspired me to start a brand new collection.

I think I've mentioned a few times already that I've recently started collecting Adam Jones. That decision can be traced back to this very trade package.

I don't know what it was, but seeing Jones's 2011 Topps Opening Day issue convinced me that enough was enough. It was time to start collecting the guy. Given the fact that he's currently one of the standout stars in all of baseball, the decision was long overdue.

Like any other player collector, I'm now on a mission to track down as many Adam Jones cards as humanly possible.

There goes the blogosphere inspiring me all over again.
Posted by Nick at 4:56 PM

I've been setting some things aside for you as well Nick.As a thank you for having to comment on my Canseco posts lol!Seriously,though,drop me an E-Mail with your address buddy ;)

Hubie Brooks' card is high on my lists of fun faves. Nice additions from Adam!

I agree 90 Donruss isn't the greatest design of the decade... but I've got to admit... I like the green over the red.

The Grace, Smoltz and Johnson were once in my collection. I have some boxes I need to sort through to see if I still have them!

Sometimes I'm not so sure about sending out so much overproduction-era cardboard. But it simply amazes me how often I hear "I can't believe I didn't already own that!"

I'll start looking for some Adam Jones cards for you.