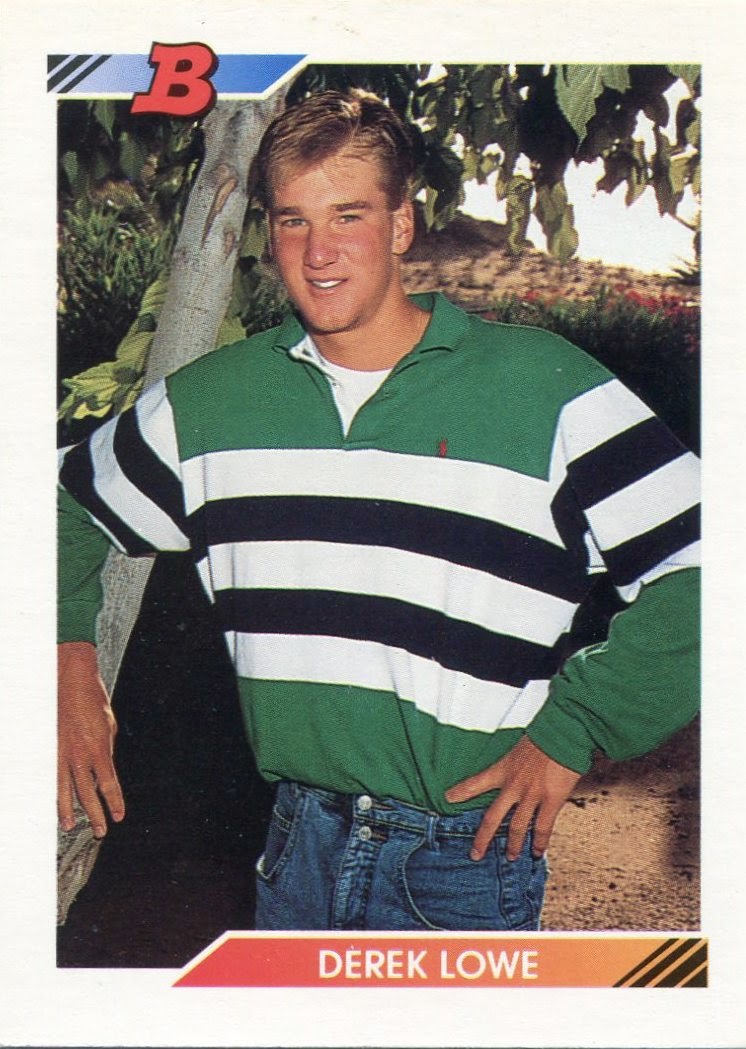 Apologizing for allowing such an dismal card to kick off the year here on "Dime Boxes."

I hope the ugliness of that shirt isn't a sign of things to come for the blog in 2015, because we actually had a lot of fun around here last year. It was certainly an interesting 365 days for both my baseball cards and my real life, but it's time to start looking forward again.

I don't usually make resolutions about my collection, mainly because I let my collection take me wherever it may rather than the other way around. Instead, I thought it'd be fun to take a look at a few things I hope to achieve on the blog in 2015.

The first goal is simple. Post more. I wrote over eighty less posts in 2014 than I did in 2013. Even with a busier school schedule, that's not acceptable. On top of that, I felt the originality of some of my posts was down last year.

I'll try and change that in 2015. My schedule for this coming semester should be just as busy as the last, but my class times are a little more conducive to blogging. And I already have a few (hopefully) original post ideas planned, including one that involves Mr. Lowe there. (And several other of his bad yearbook photo buddies from '92 Bowman.)

Either that, or I'll force myself to look at that ugly shirt for every day I don't post.

That should motivate me. 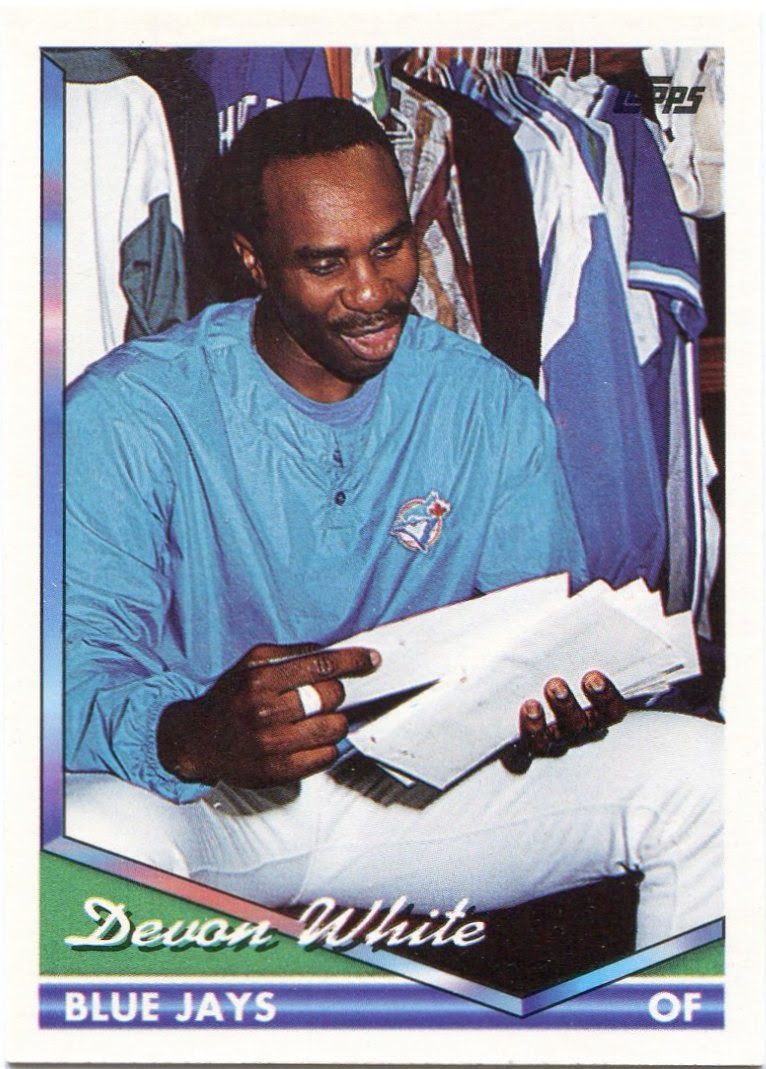 Perhaps. I'm not entirely convinced of it. If anything, I think readership was just a lot less consistent than it's been in the past. I'd write a post one day and get a fairly good reaction, then write another the next and get crickets. Maybe people were simply busier last year.

That said, I did notice a few of my more consistent and longer-tenured readers leave during the course of 2014. Some of our most beloved and well-known bloggers hung up the cleats as well.

At the same time, however, I think I managed to gain a new crop of readers in 2014. And it was one of the better years I can remember in terms of great new blogs sprouting up.

If you ask me, the blogosphere is still going strong. 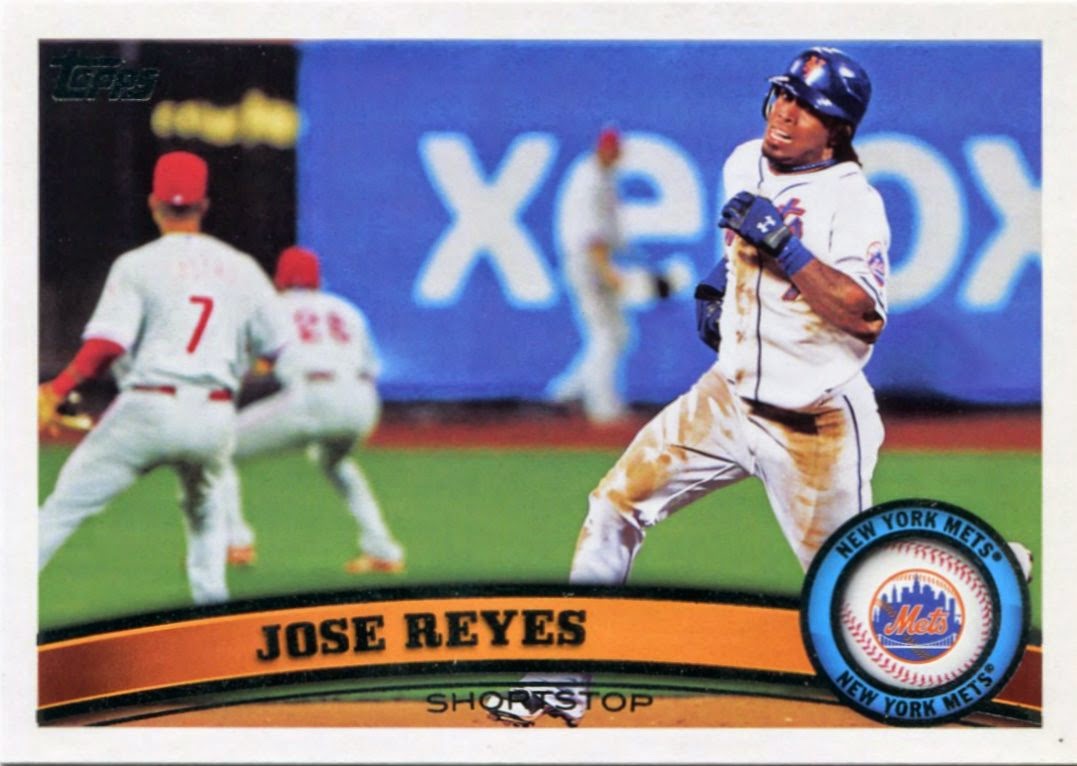 One of the biggest surprises of the year was the reaction I got to my inside-the-park home run post in November.

I'd never really written anything like it in the history of the blog. There were barely any words in there. The only reason I wrote it was because I was so strapped for time. I didn't think it was that great of an idea, but ended up being one of my most well-read posts of the year.

Still, I don't really want my blog to become devoted to those types of write-ups. I like to pen more in-depth thoughts about my collection. It keeps me fresh. Still, I'll try and come up with a few ideas similar to my inside-the-park post.

I have a couple rolling around already. 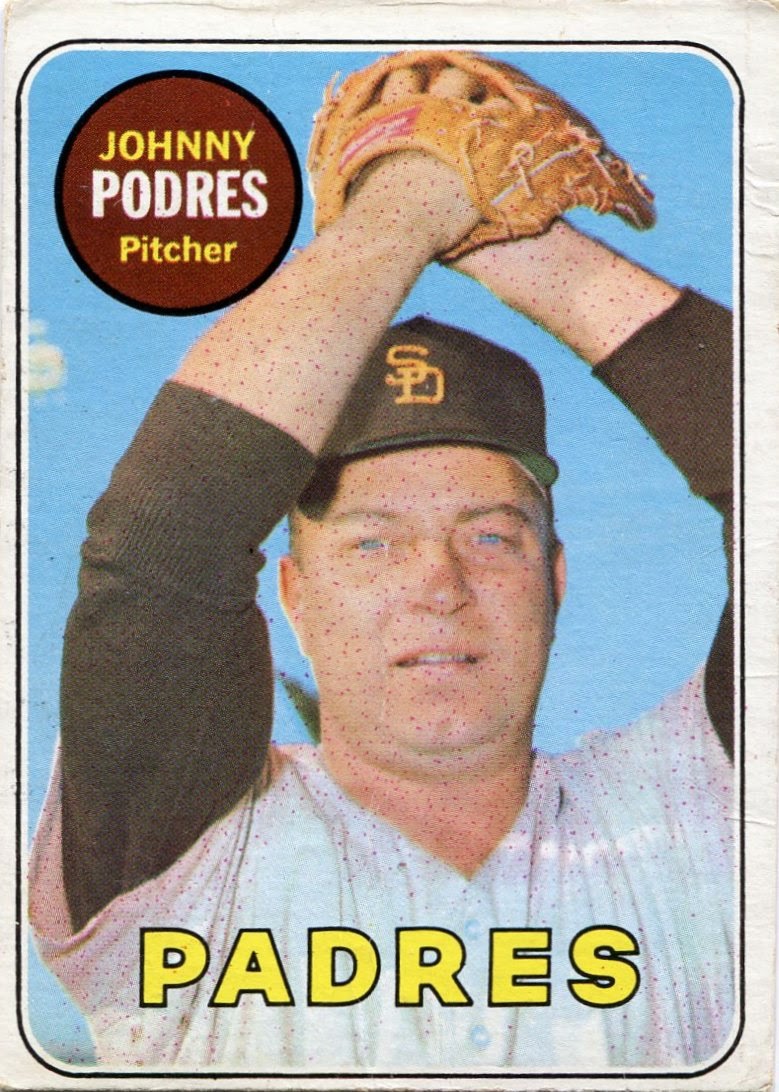 Here's my promise to you.

I'm going to get my ass in gear with creating the Top 100 Vintage Countdown I've been promising since the middle of 2013.

I've had the list of nominees sitting in a file on my computer for about a year now. I haven't gotten around to doing much with it, though. I still have to work out a few kinks with the list, but it's something I've been wanting to create for a while now.

Will the serendipity of a guy named Podres playing for the Padres earn a spot in the Top 100? I hope to find out in 2015.

Look for it sometime this spring or summer. 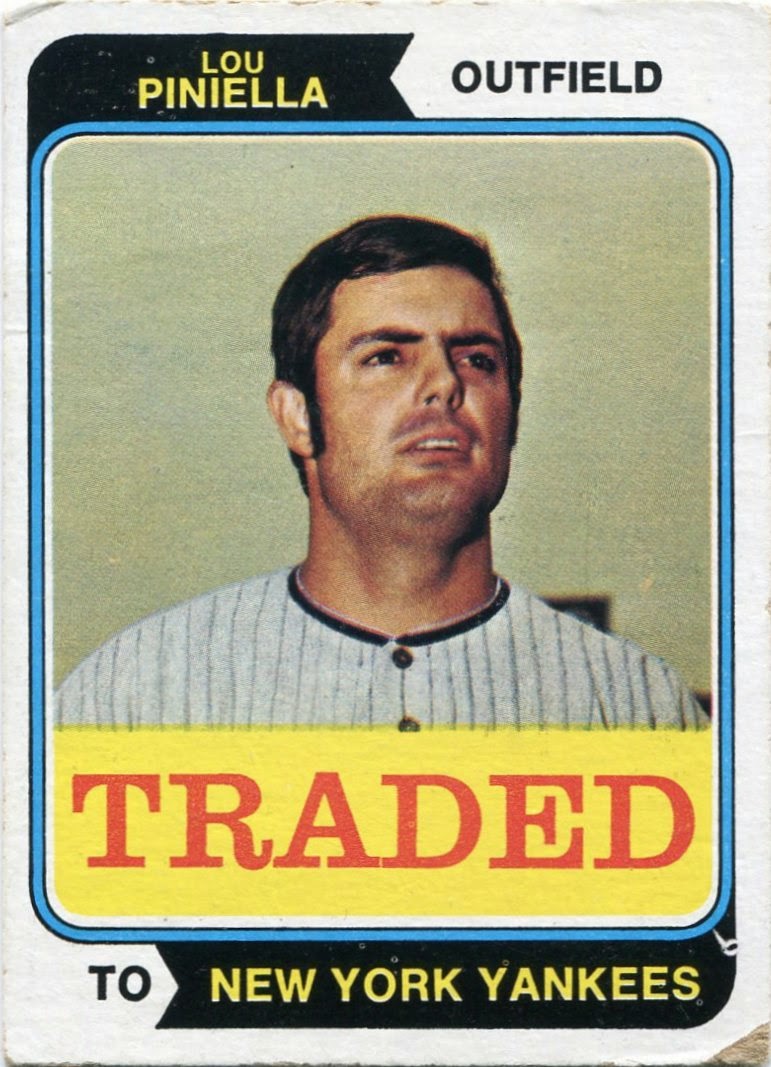 I know I owe quite a few people return packages for the great cardboard I've been receiving lately.

I'm going to make it my duty to mail out more cards in 2015. One of the reasons I didn't hit the post office as much in 2014 was because I was broke most of the year. Mailing a package isn't cheap these days.

Still, there's no reason I can't drop a couple PWEs in the mail every week or so. I can send someone about fifteen cards (or more) for the cost of a single stamp. A consistent stream of those will blast bubble mailers out of the water in due time. 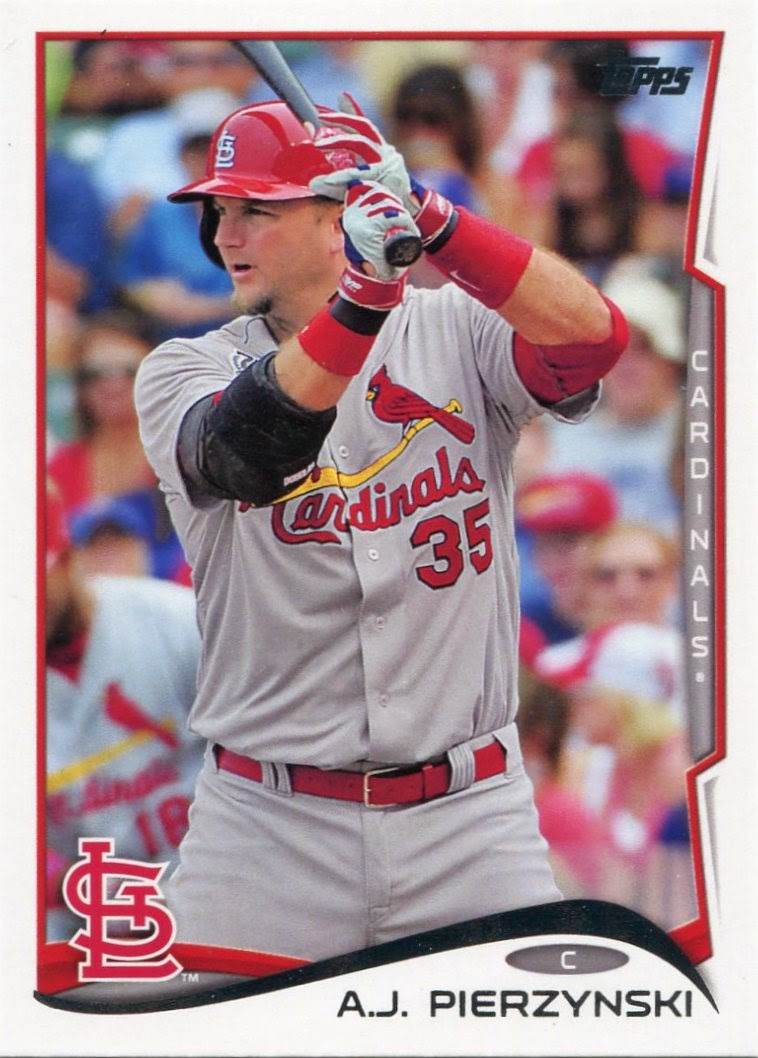 Maybe 2015 should be the year of Just Commons as well.

I broke my seven-year streak of buying a hobby box of Topps Update in 2014. Instead, I sampled a hanger when the stuff hit the shelves back in October and put all the other base cards I needed from the set in my Just Commons cart.

All told, I ended up spending about a third of the cost of a box and got nearly all of the base I needed in the process. I felt like an idiot for not thinking of it sooner. (A very broke idiot.)

In a few weeks, I'm going to make that trip to Target as soon as I catch wind of 2015 Topps being out. I'm sure a lot of you will as well. But, with Just Commons at our disposal, we don't need to make those second, third, or even fourth trips back to our local big box stores to get what we want. 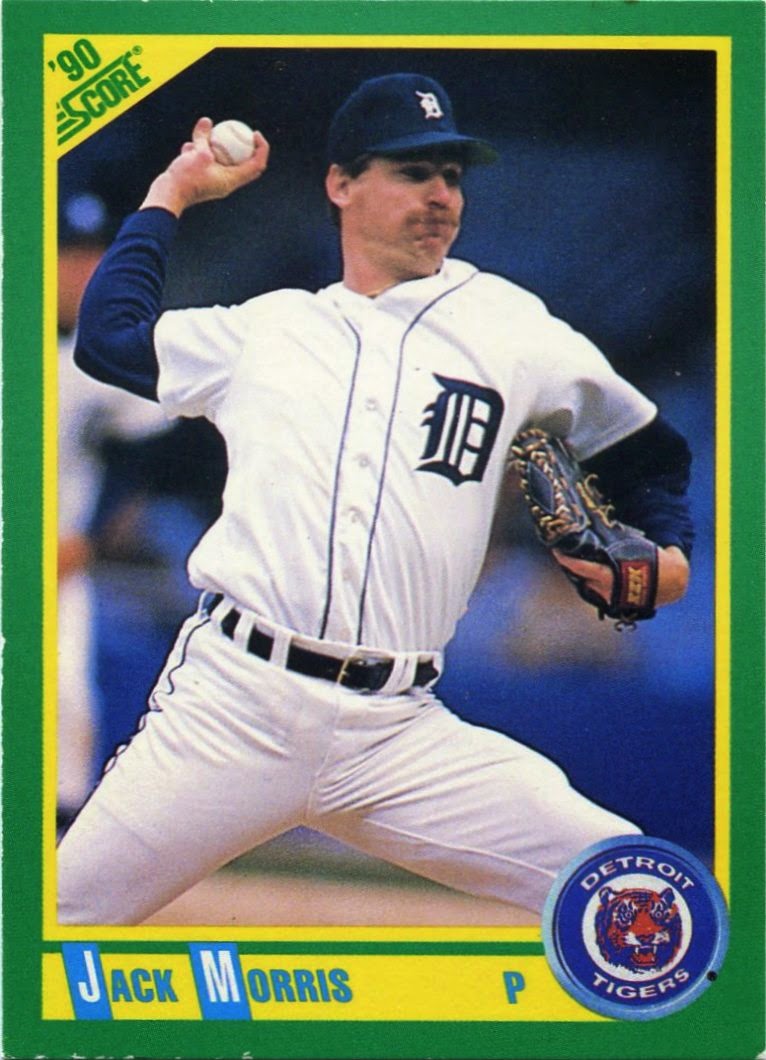 I did a lot of garage saling as well.

I'm praying the cardboard gods keep smiling down on me in those departments. In 2015, however, I'm hoping to add a new outlet to the fold.

A couple friends and I have recently taken to hitting some local thrift stores. It's a fun time even if we don't find anything. (We usually don't.)

I've spotted cards a couple times during our trips. The first was a big box of overproduction-era singles. Mostly football and basketball, although I did spot some 1990 Score baseball in there. Nothing I'd want. The second box I found was all football. Pass.

I'm convinced that I'm going to find some worthwhile cardboard at a thrift store in 2015. 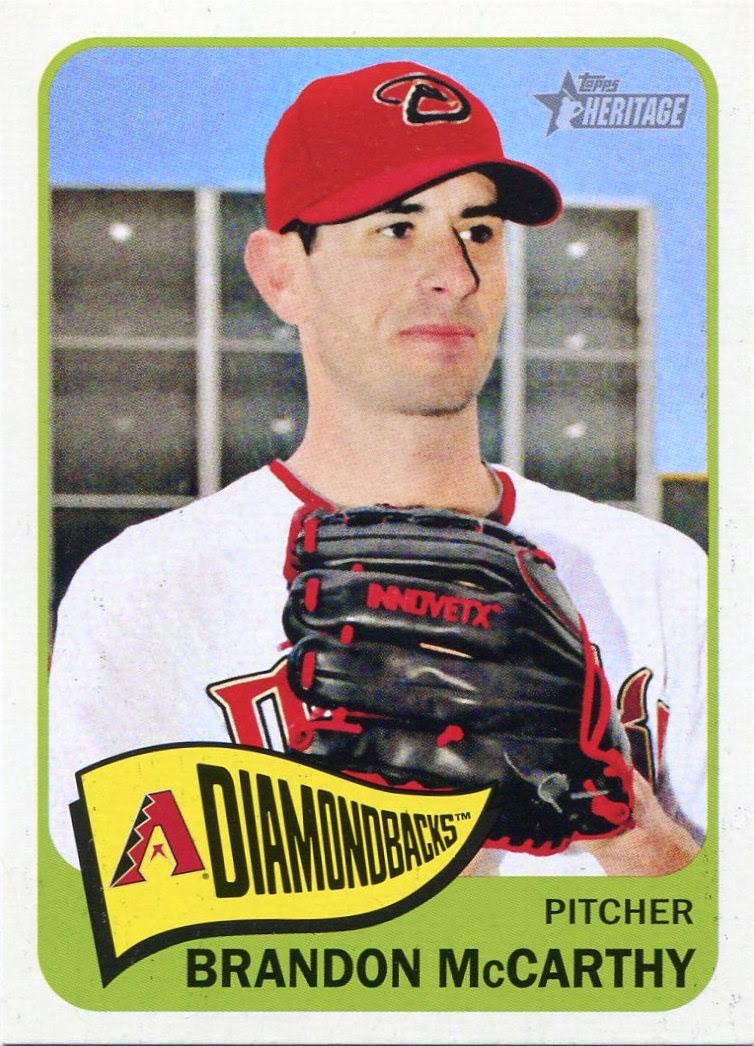 For a while, I was trying to make 2014 the year in which "Dime Boxes" would finally branch out into social media.

I created a Facebook page for my blog, and I also made a Twitter account for my scattered card-related thoughts. I praised the blogosphere amongst a few other Internet sources as well.

At first, I enjoyed it. It was kind of fun connecting with a few new readers outside of the blog. I even liked following some of my good-humored heroes on Twitter, like Brandon McCarthy. I saw social media being useful for a long time down the road.

After a while, though, the grand branching out of "Dime Boxes" started to get stale. I lost interest pretty quickly. My Facebook page was pretty much left for dead, and I deleted my Twitter account for good last week. I still use Facebook for my non-card life, but Twitter really isn't for me in any realm.

My will to blog is always there. It will always be there. Social media isn't a great motivator. So there's not much of a point in bothering with the Facebooks and Twitters of the world.

If anything, 2015 will be the year "Dime Boxes" stays just where it is.

Why branch out when this fantastic community has been here all along?
Posted by Nick at 2:26 PM

Twitter has sucked me in, but I agree, for connecting w/card collectors, there's no topping the blogosphere.

I know you'll come up with some fantastic finds one way or another. Good luck. I'll be reading. Happy New Year, Nick.

"I'm convinced that I'm going to find some worthwhile cardboard at a thrift store in 2015. Call me delusional."

I have yet to find any at the 3 or 4 thrift stores I frequent. Though I always find nice ball caps at one of them.

Looking forward to continued reading. Your post are always a great read

Keep up the good work,boy!

Looking forward to your Top 100 Vintage Countdown! Good luck in 2015!

Im knew to blogging, and even trying to start my own. Your blog is one ive been reading here lately. I might not comment ...I think this is my first one..but i really do enjoy looking and reading your blog. reminds me of my own collection..cheap and random. I too am a student..(College) so money is tight.

Justcommons is a great site, found out about them last year. ive hardly bought any retail since then.

keep up the great work bud

While i've ran action figure blogs for about 5 years now,I'm new to the baseball blogosphere. I will make It a point to drop by Dime Boxes to see whats cooking and maybe learn a thing or two-Like never starting a post with a picture of a professional baseball player In civies ;) Happy New Year!