Tribute to 42: A new mini-collection 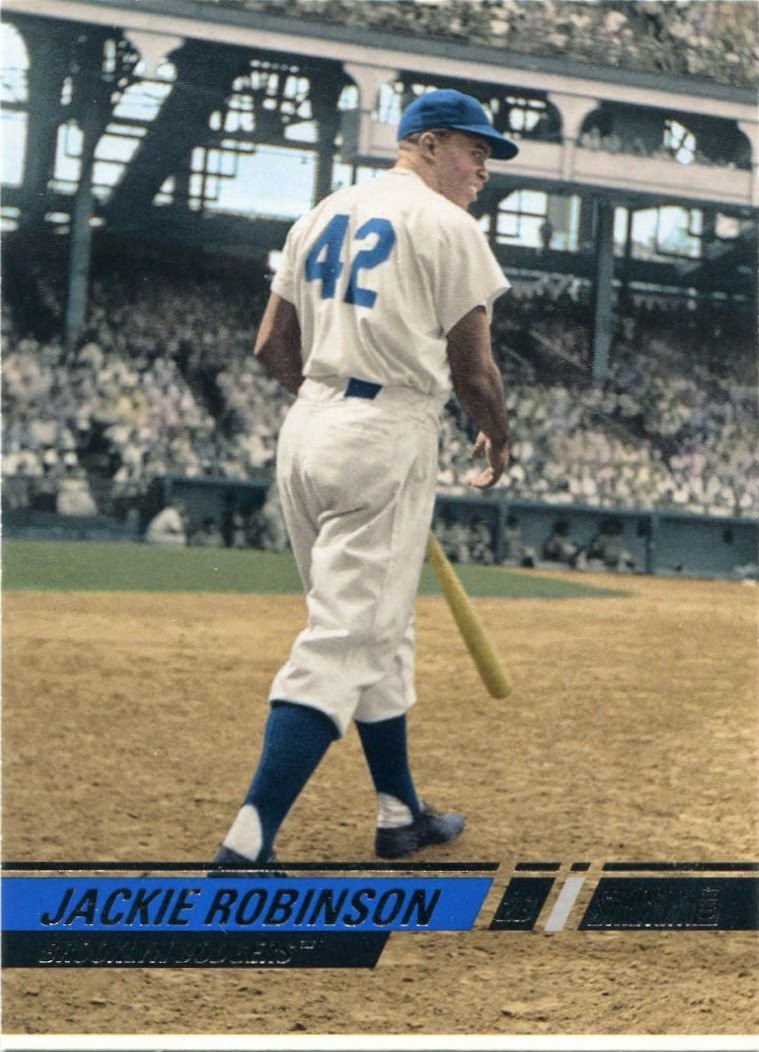 It's the most recognizable number in all of sports.

As you probably know, Jackie Robinson's #42 is retired across all thirty major league baseball teams. That alone should tell you how important he was to the game.

If that's not enough, though, I'll bring up the fact that the movie 42 was produced in Robinson's memory over sixty years after he made his big league debut in 1947.

I was partaking in my third viewing of 42 on an ordinary evening a few weeks ago when I suddenly felt a bit of inspiration. I knew the feeling.

It's the feeling that seems to hit me every, oh, six months or so. 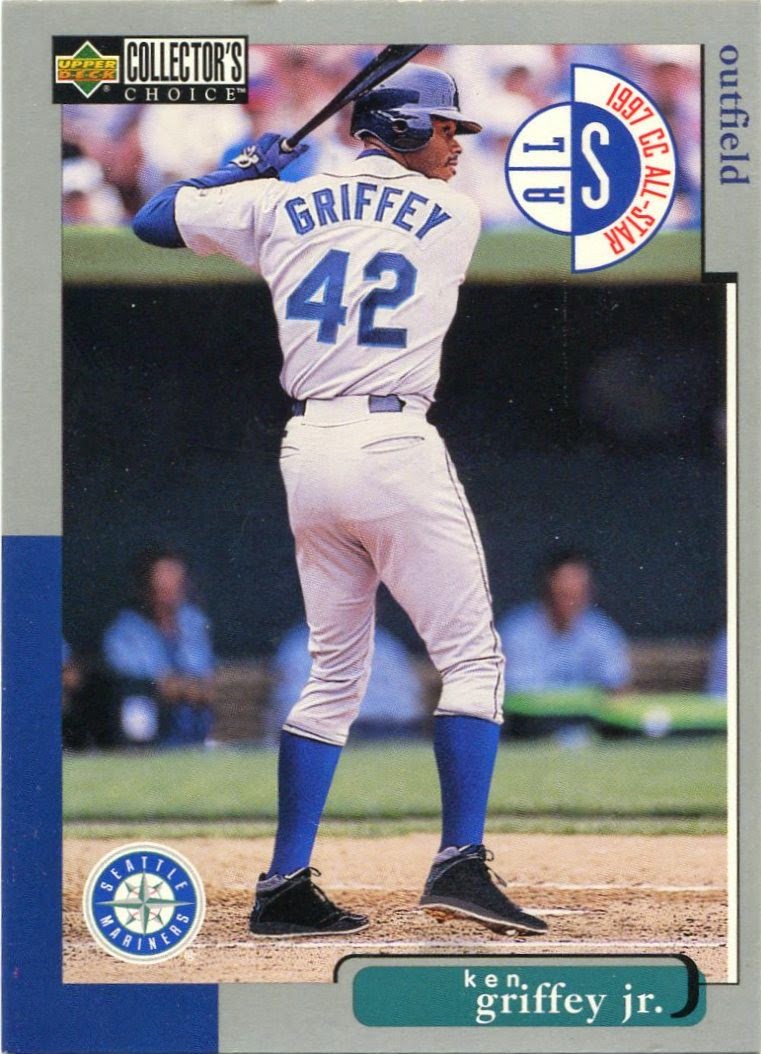 I had an idea for a new mini-collection!

On April 15th (or thereabouts) of each baseball season, every player wears #42 in honor of Jackie Robinson's big league debut. It's a great tradition, and one of my favorites in the game today.

What I didn't know before I decided to start this new mini-collection, however, was that you can trace its origins back to "The Kid" himself, Ken Griffey Jr.

Griffey received special permission from the Robinson family to wear #42 on April 15th, 1997, the 40th anniversary of Jackie's first appearance with the Dodgers. This card, which was part of a recent impulse buy, gives us a shot from what would turn out to be a historic contest. (I'll show the rest from that impulse buy in the near future.)

Pretty soon, other players began to don #42 every April 15th. Shortly after that, entire teams started wearing it. Now, all of MLB sports #42 on April 15th, and that's what this mini-collection will be centered around.

What I'm trying to do with this theme is track down each and every card that features players wearing #42 on Jackie Robinson Day. 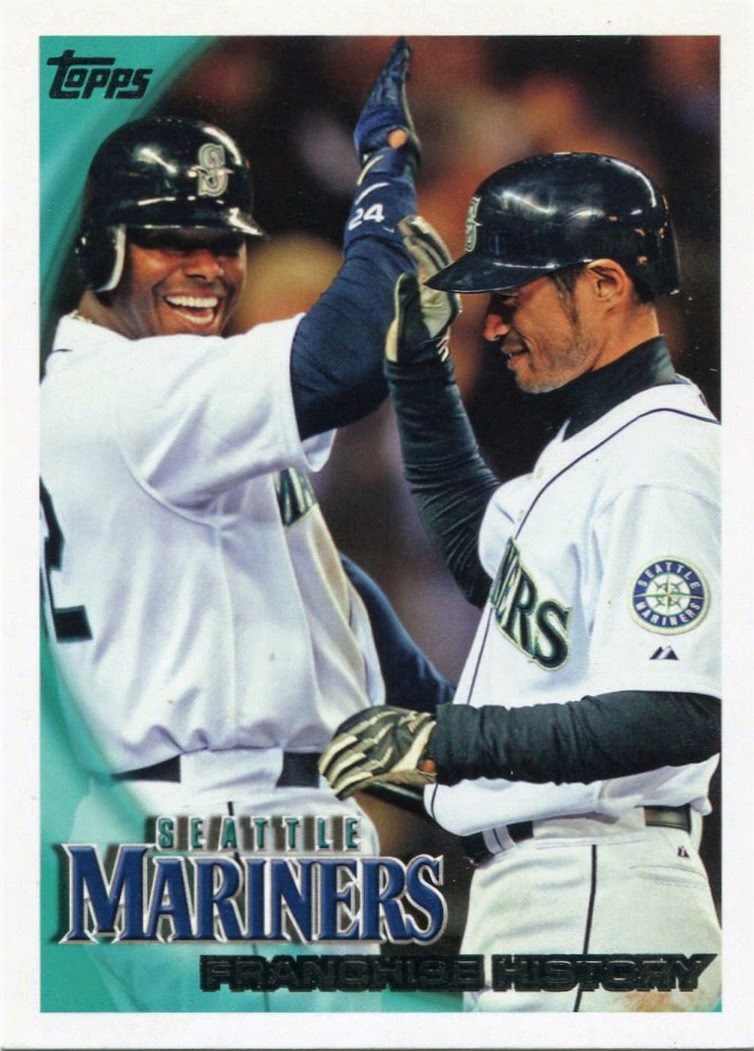 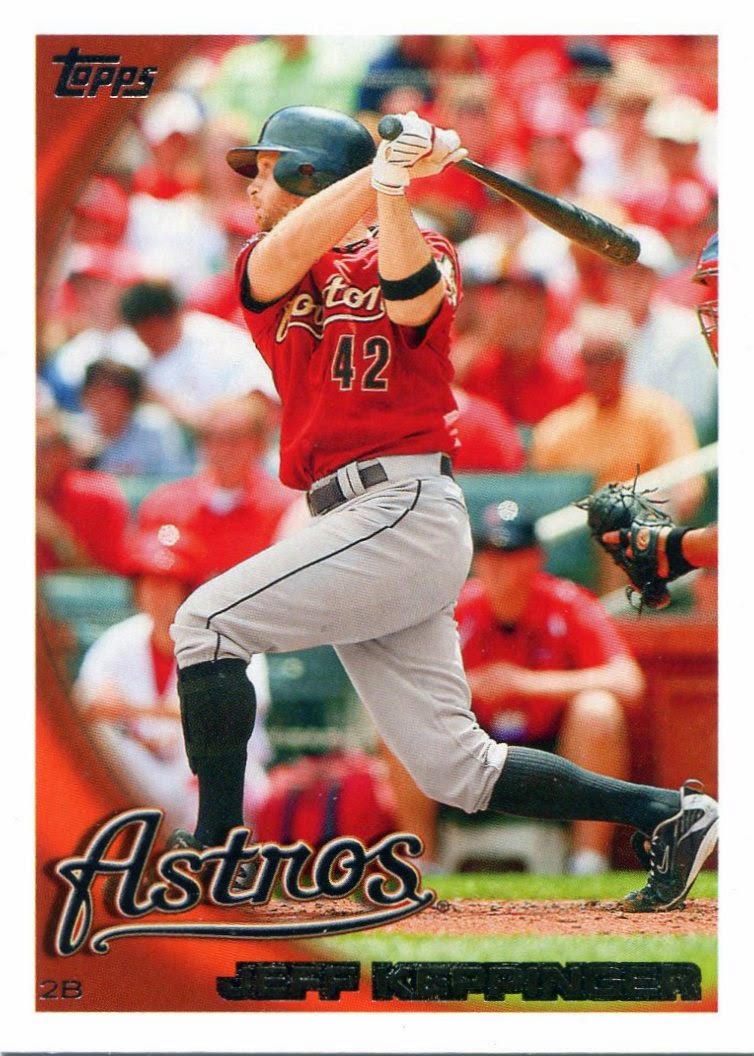 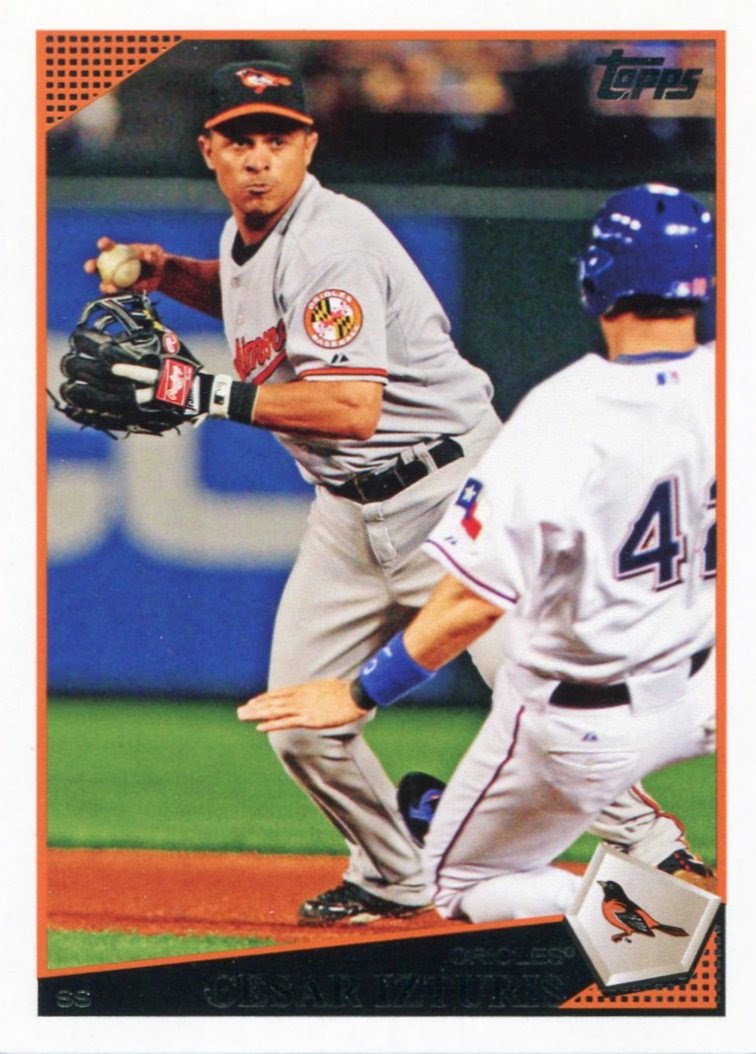 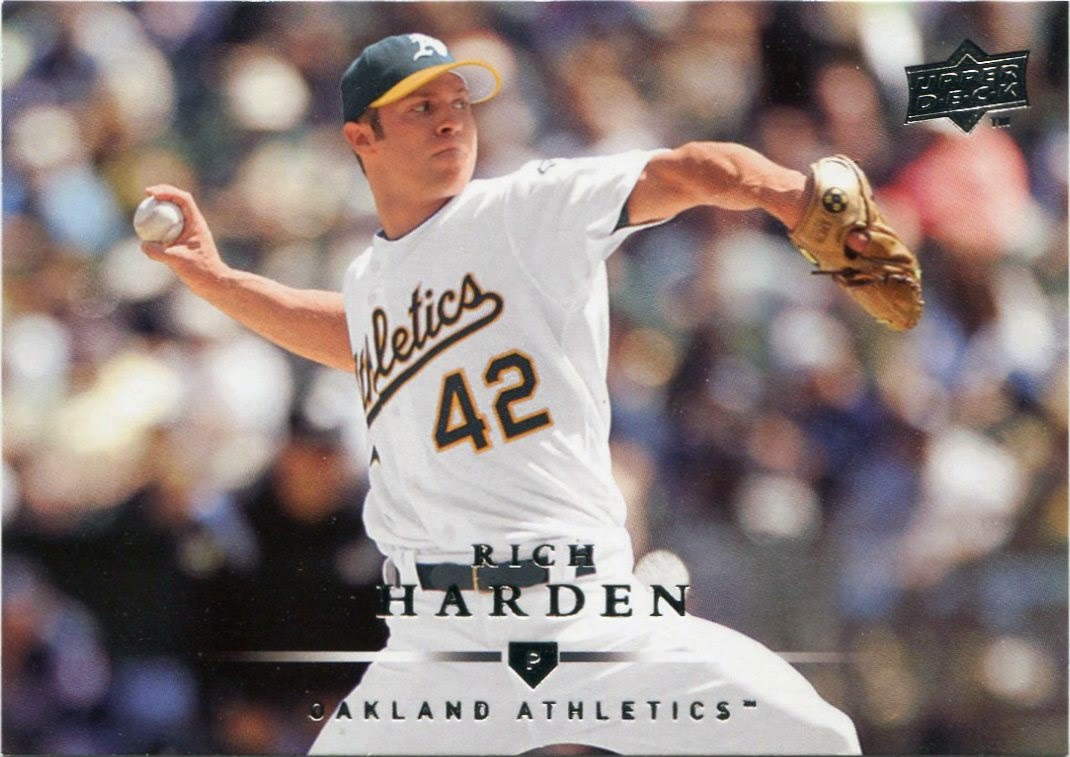 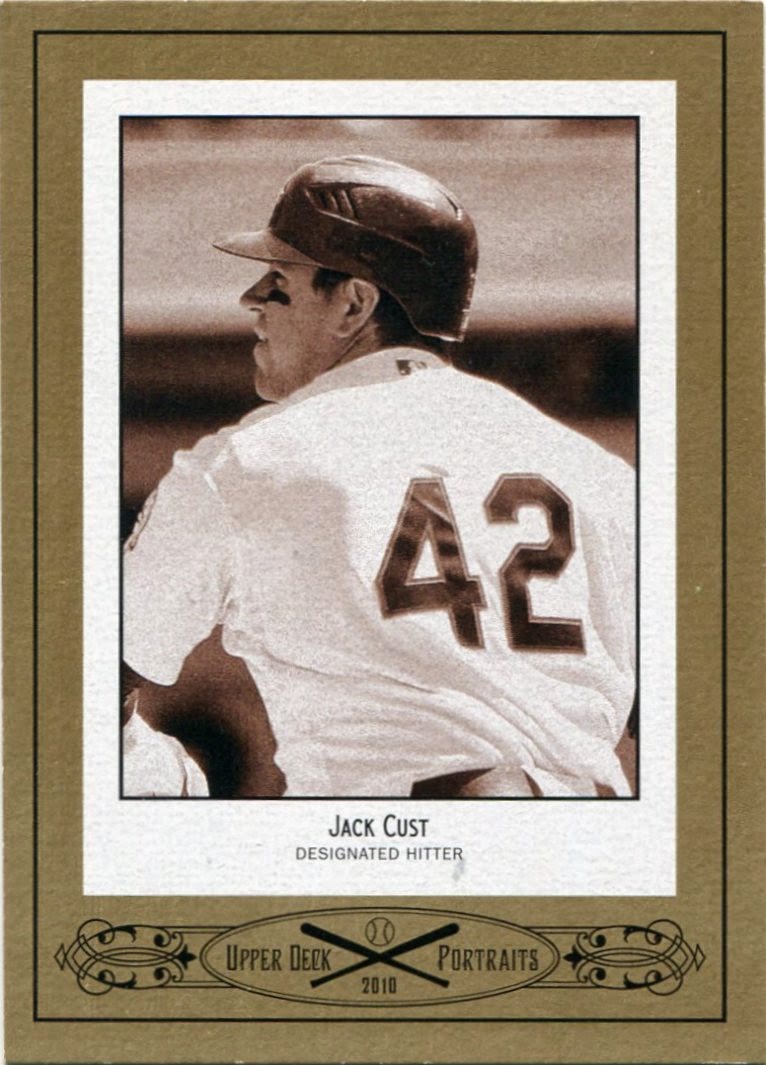 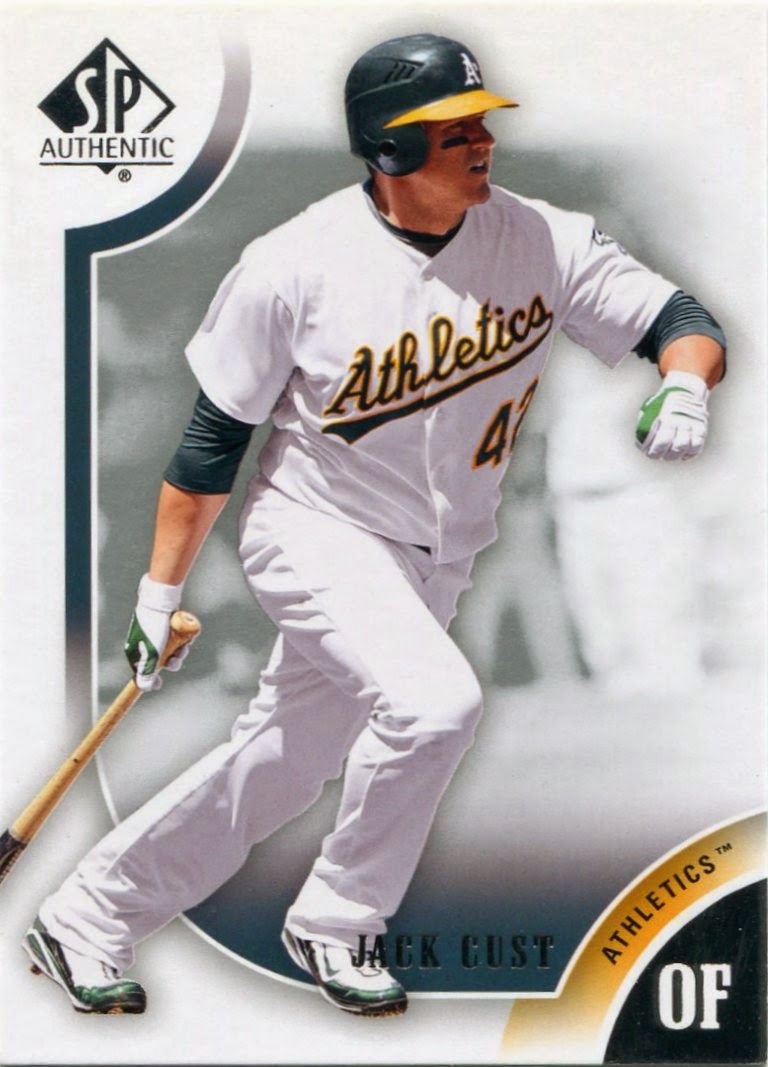 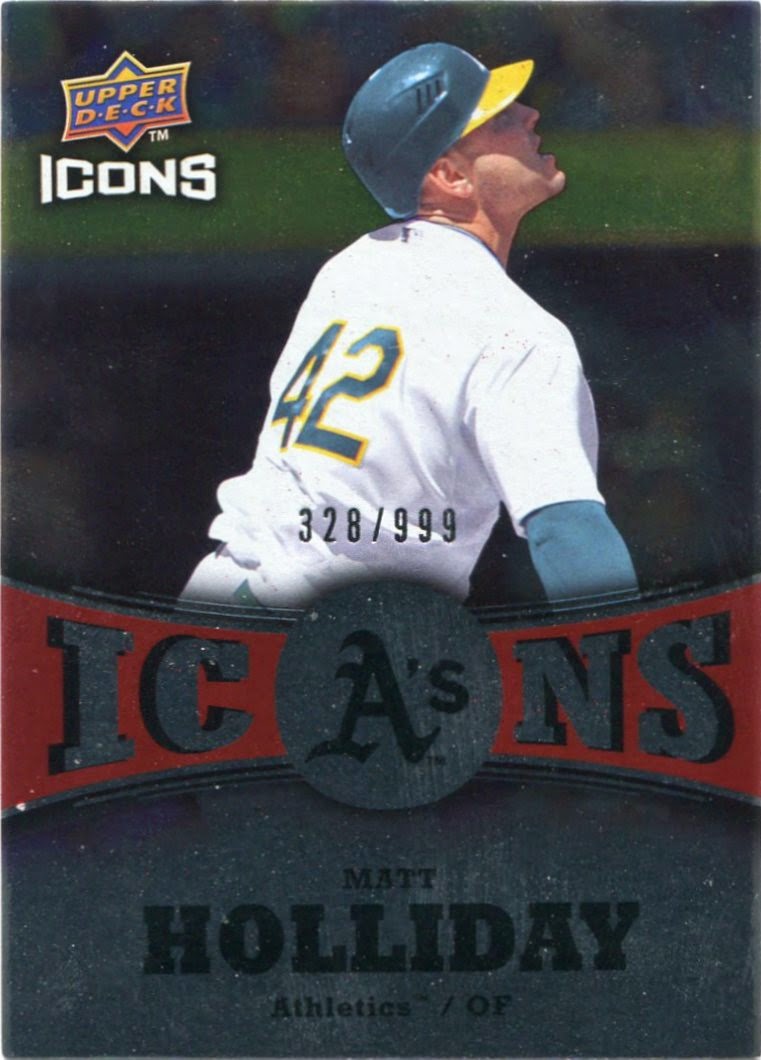 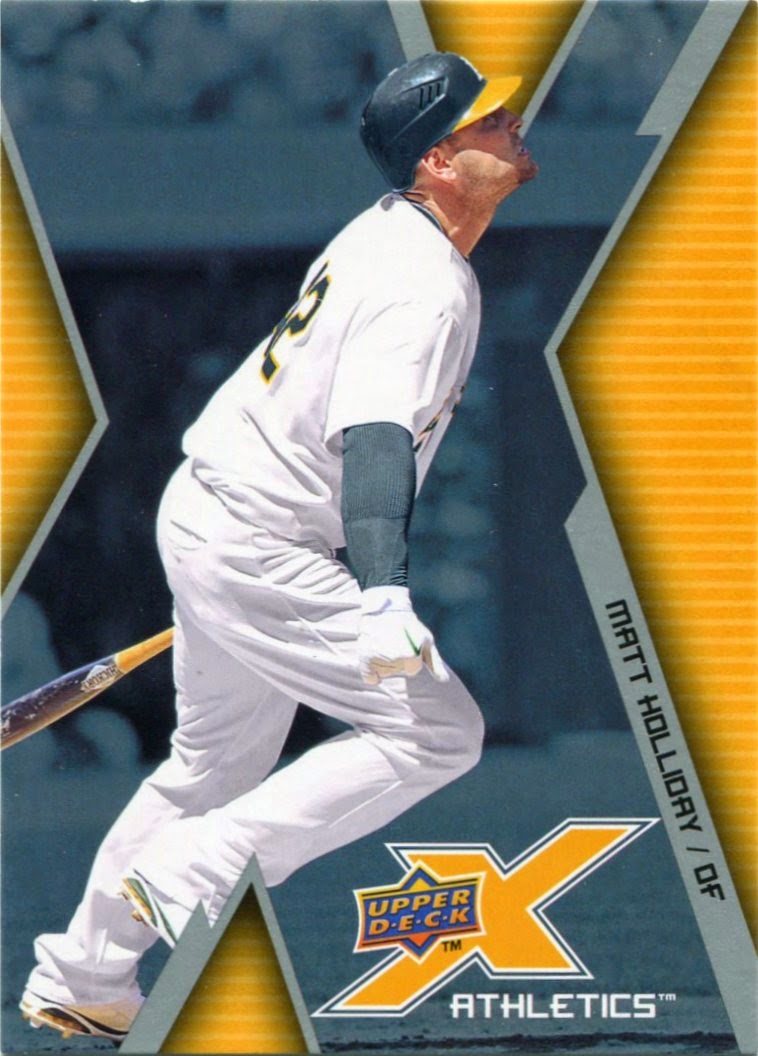 These are all the ones I've found in my collection thus far.

The only qualifier I have for this mini-collection is that the card must show the #42 in some way, shape, or forms. Players who were grandfathered in after Robinson's #42 was retired (Mariano Rivera, Mo Vaughn, etc.) do not count.

It's more obvious on some than others. You can just make it out on the Griffey/Ichiro "Franchise History" card, and, without that Ranger baserunner, I would've never known that Cesar Izturis double dip was snapped on Jackie Robinson Day.

Also, I can't explain why there are so many A's and so little of other teams. I don't have any Dodgers, but, thanks to my buddy Alex, I know at least one exists. (It's a short-print, of course.)

Of course, if you have or know of any that aren't shown here, please let me know. It is my goal to get every "Tribute to #42" card in existence.

Help me on this historic mini-collection quest!
Posted by Nick at 6:43 PM

Another stroke of brilliance from the young Jedi.

Great idea for a mini collection. I had a feeling that this post would be coming soon after the comment you left on my blog a few weeks ago.

I'll toss some 42 cards into the package I have ready for you.

I love this idea Nick! I'm going to search my boxes to see what I might be able to send your way.

Wow! What a great mini PC! Love it!