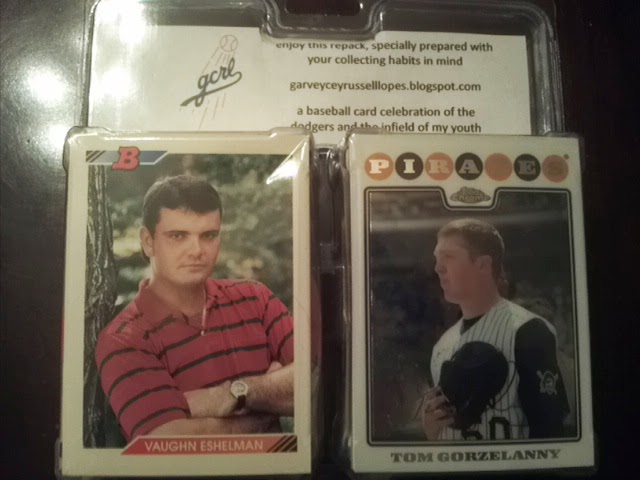 I've lost track of the number of repacks I've opened over the years.

They're always good for a fun time, and, at just four bucks, they're easy on the wallet. Still, if I had to put a number on it, I'd say I only need about ten percent of the cards I get, if that. Yes, the truth of the matter is that it's a whole lot of '88 Donruss and '89 Fleer most of the time.

The thought of being able to create my very own custom repack has crossed my mind on a number of occasions. Wouldn't that be a treat? Apparently, at least one of our fellow bloggers thinks so. And I have a suspicion he might be a mind reader as well.

What you see above fell out of a bulky bubble mailer I recently received from Jim (aka GCRL) of the awesome blog "Garvey Cey Russell Lopes." And, in case you can't read the top of that repack header, here's what it says.

Enjoy this repack, specifically prepared with your collecting habits in mind.

A custom repack! The spectacular idea alone instantly made it one of the best trade packages I'd ever seen. And that was before I even dug through all the terrific cards Jim picked out.

As a result, it is my pleasure to present the first ever edition of Custom Repack Wars. Points will be given however I see fit, usually with little or no sane thought attached to them.

We'll pit one side against the other... 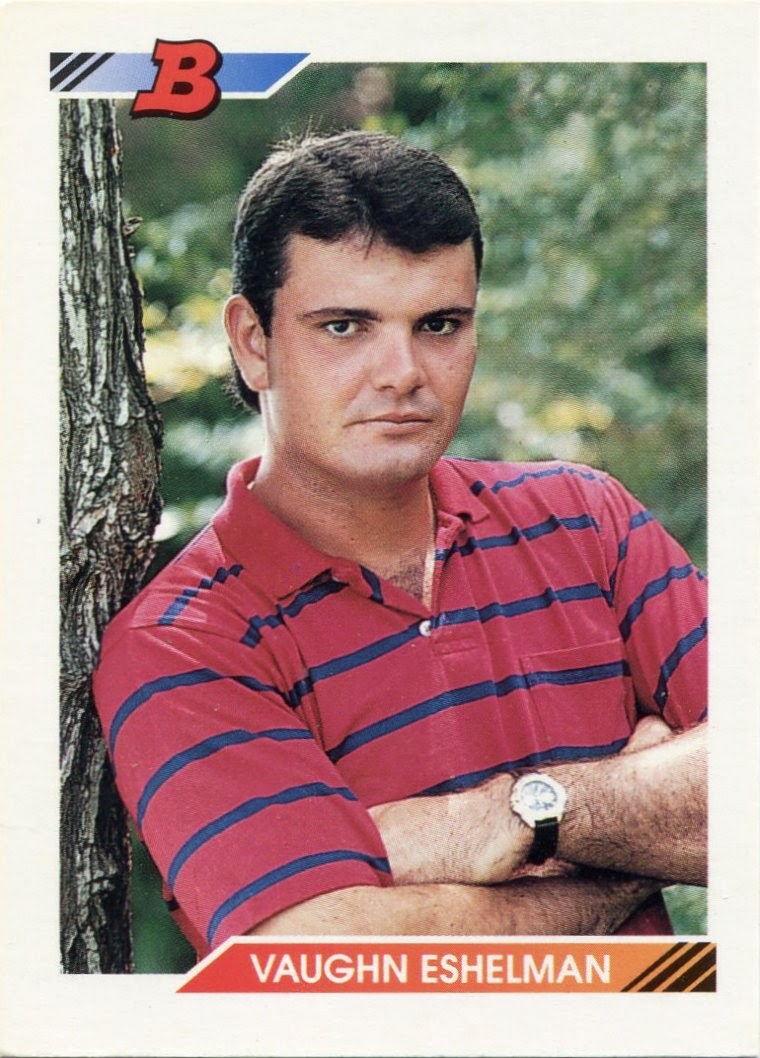 ...starting with the stack of cards on the left and Vaughn Eshelman's high school yearbook photo.

Only two posts into 2015, and this is already the second member of the '92 Bowman fashion show I've featured on the blog. My sincere apologies, again.

They're so ugly. And yet I can't look away. I mean, just get a glimpse of Mr. Eshelman here.

Red polo. Neatly parted hair. Trees in the background for no particular reason.

And is that a Rolex? 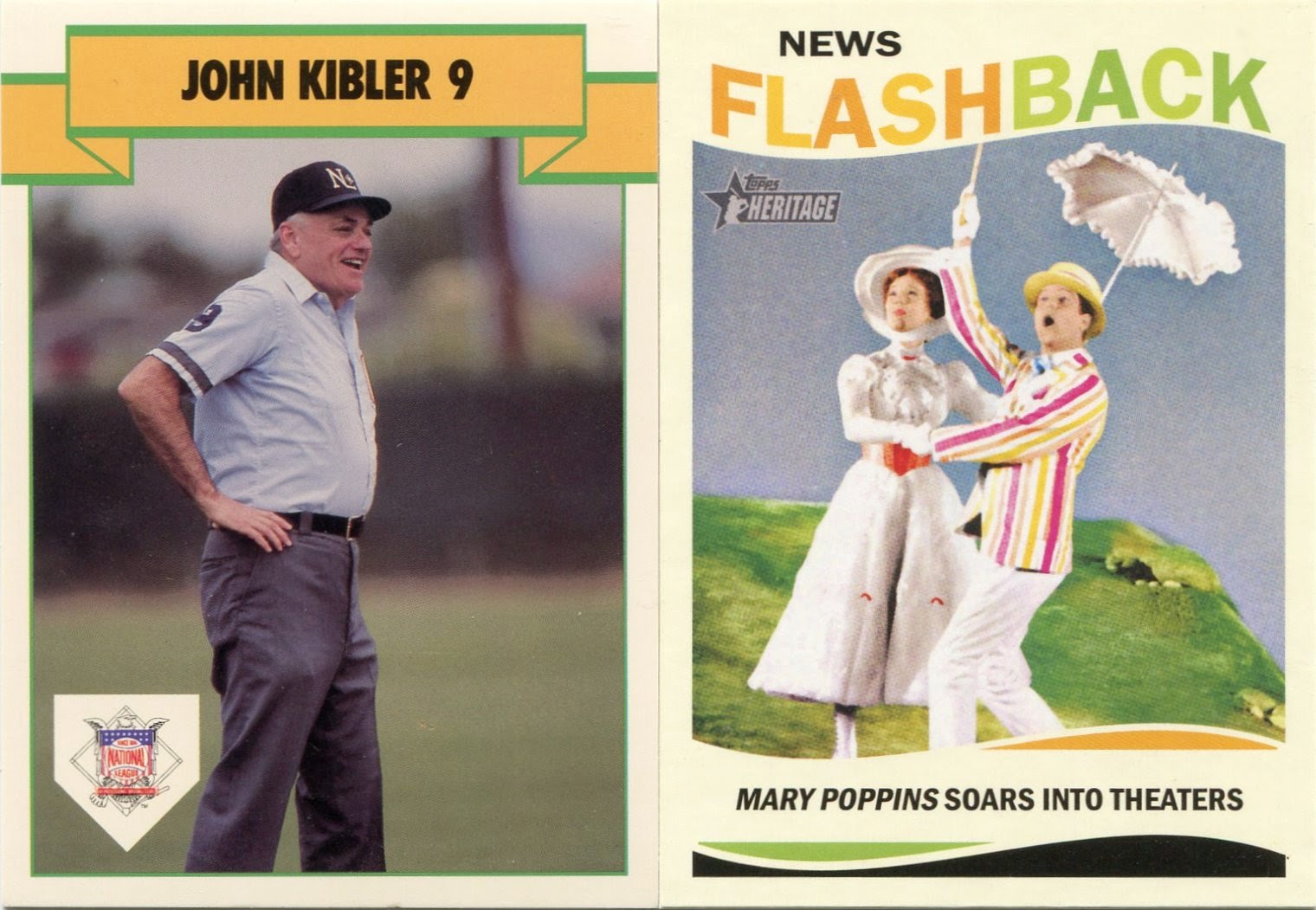 Do my collecting habits include umpires and Mary Poppins?

You bet. The Kibler earns bonus points for including a black armband, an example of the amazing research Jim has been presenting on his blog lately. I needed the Heritage insert for my 2013 "News Flashbacks" set.

As you might guess, it's my first Mary Poppins card.

Umpires, musicals, and everything in between, +2 each
Armband bonus, +3 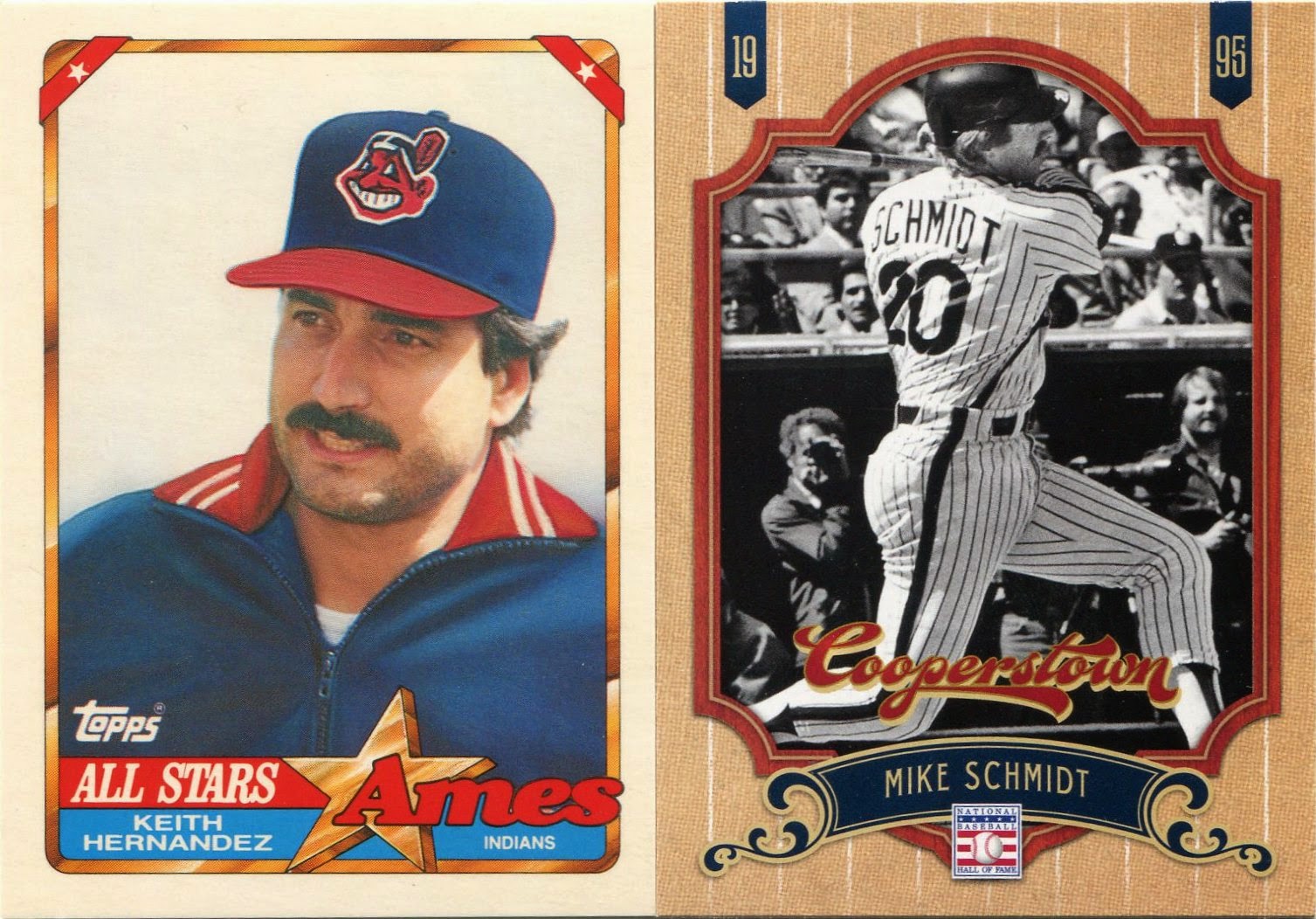 My Mike Schmidt collection has been growing in leaps and bounds.

I think I acquired over a hundred new Schmidts in 2014 alone, but that Panini Cooperstown single wasn't one of them.

Yup. Hernandez played in Cleveland in 1990, his last season in the bigs. That airbrushed oddball (which I'd never seen before Jim sent it over) is one of just a handful of cards I own of him on the Indians.

Hopefully he didn't fall victim to any mistaken Second Spitter claims in Cleveland. 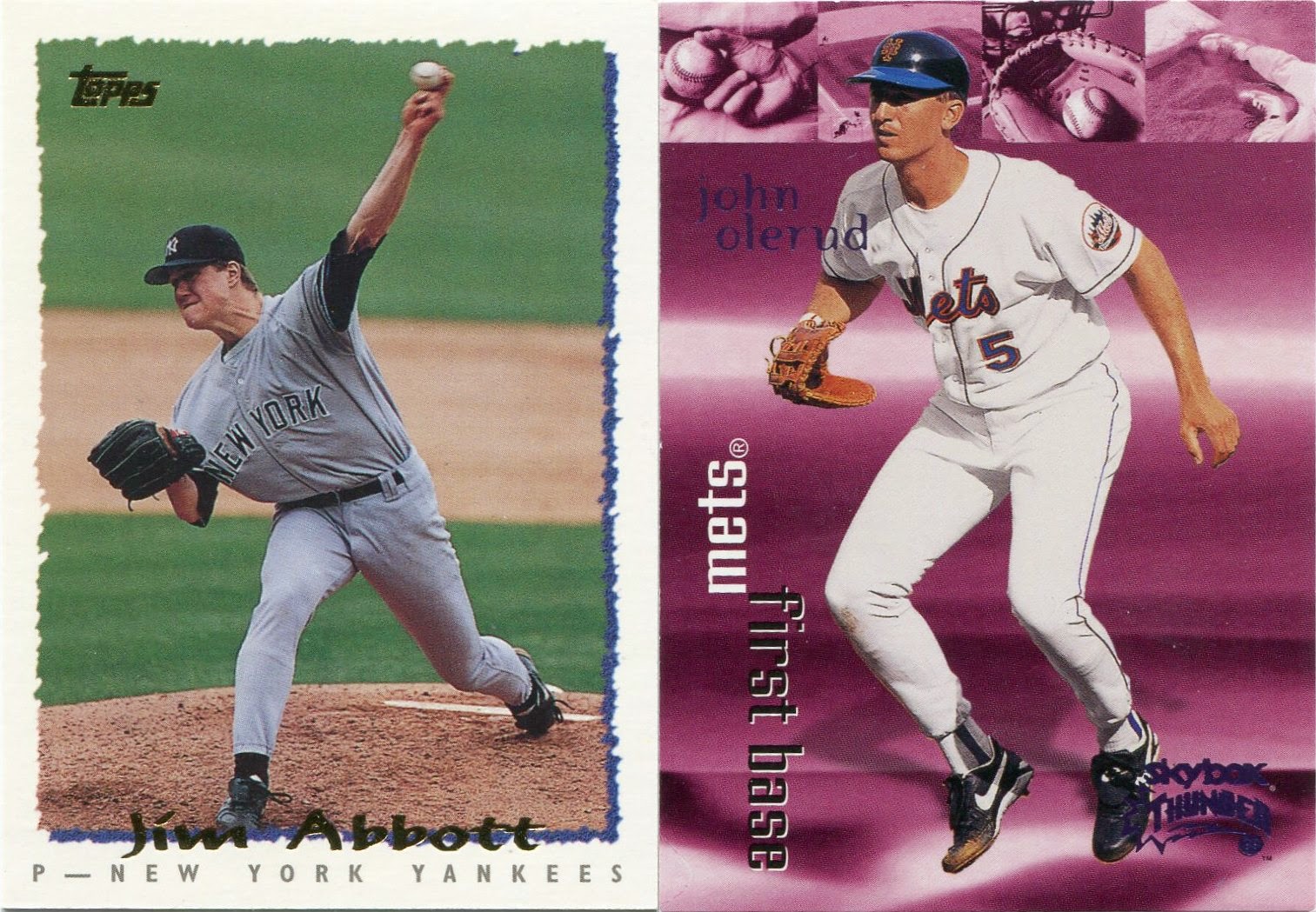 Also included were some new cards for a couple of my most prominent player collections.

I'll spare you the agony of having to read the rap-tastic back of that John Olerud. All I'll say is that the people at Skybox used the word PHAT to describe one of my favorite ballplayers.

Shivers down the spine. 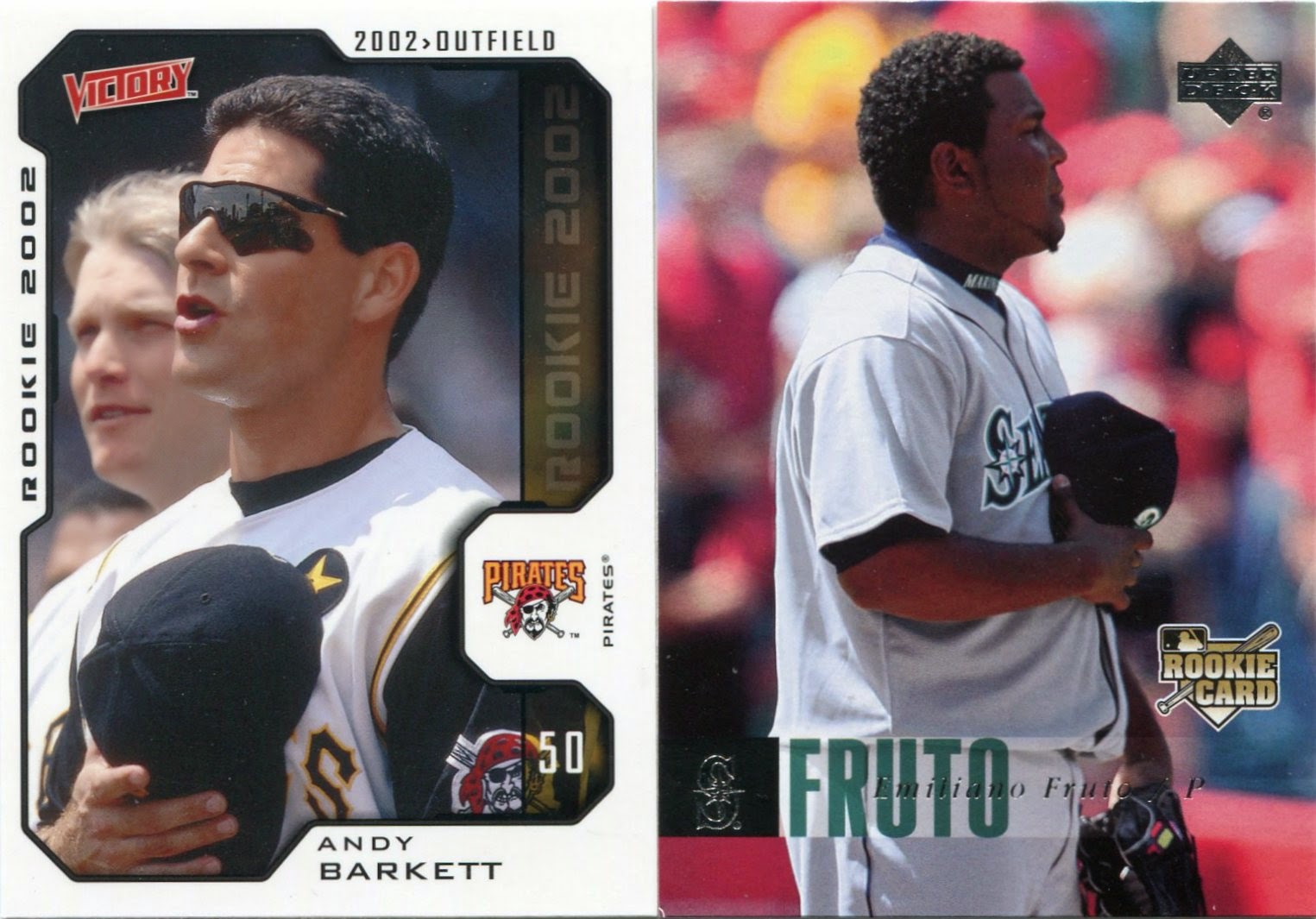 Shots of guys like Andy Barkett actually singing the anthem, however, are an added bonus. 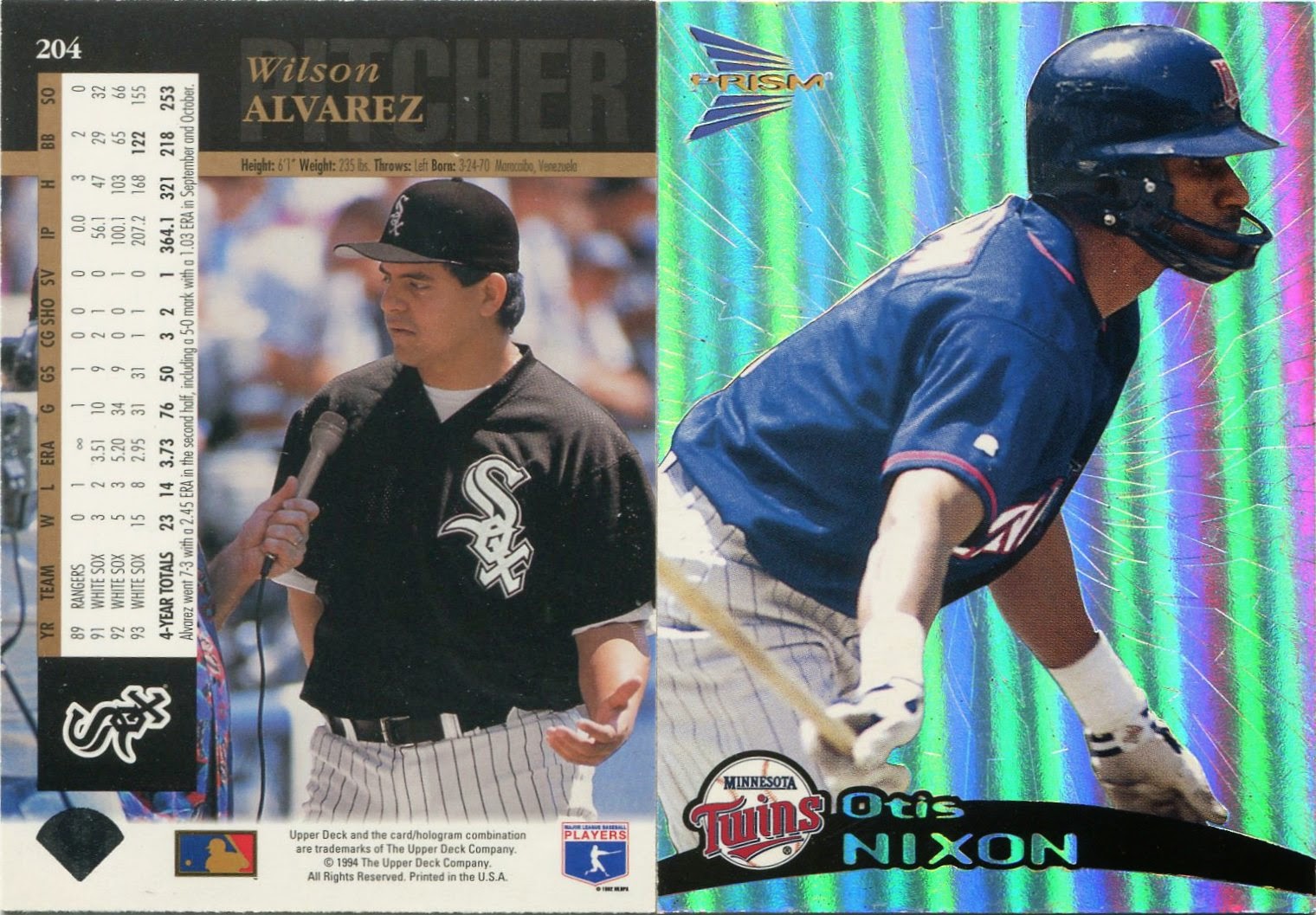 Once you get past that blinding Prism design, you might notice that Otis Nixon is wearing a face mask.

Those are tough finds in the world of cardboard.

And Wilson Alvarez did not like that question, thank you very much.

Interviews and face masks, +2 each 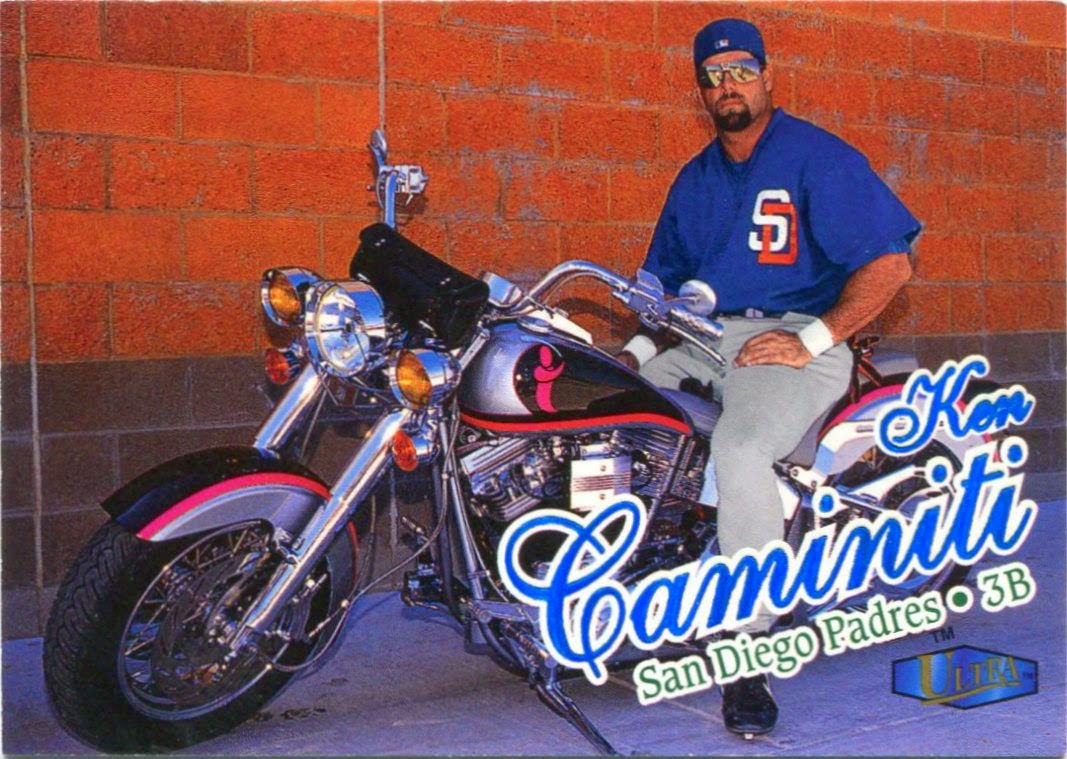 Ken Caminiti always struck me as a motorcycle kind of guy.

This fantastic outside-the-lines shot from the people at Ultra confirmed it. 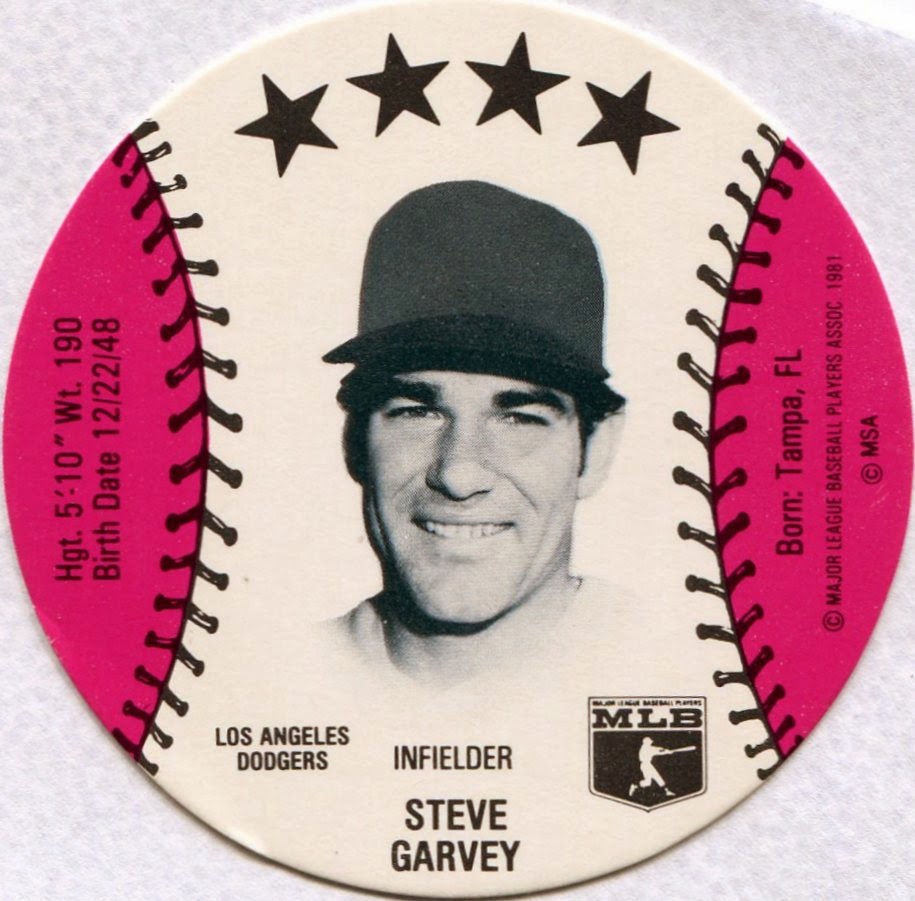 Even with cards that included umpires, anthems, and choppers, "Mr. Clean" here was the unquestioned MVP of this stack.

Jim, as you probably already know by now, has what can only be described as an insane Steve Garvey collection. You name it, he probably has it.

I'm tickled by the fact that he chose to share one of his spares with me. This sweet disc-shaped piece is a perfect example of why oddballs of the '70s were so great.

Good luck finding anything like it in this day in age. 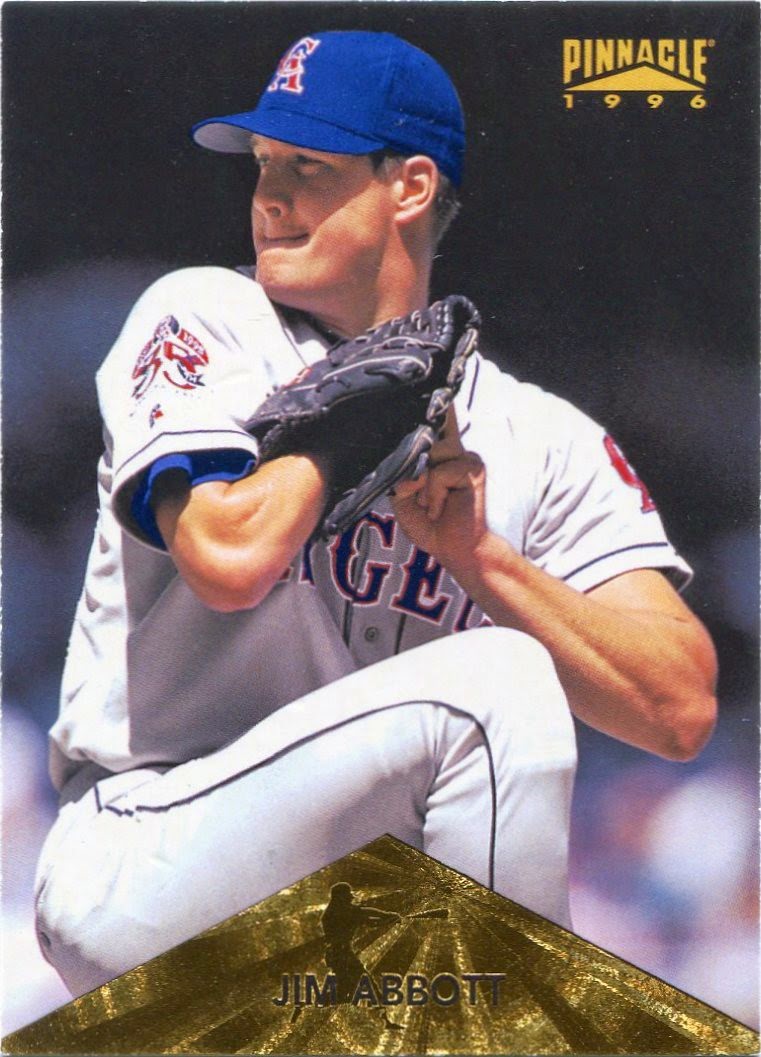 We start stack #2 with yet another new Abbott gem.

If my Abbott collection can ever be half as good as Jim's Steve Garvey collection, I'd consider that a success. 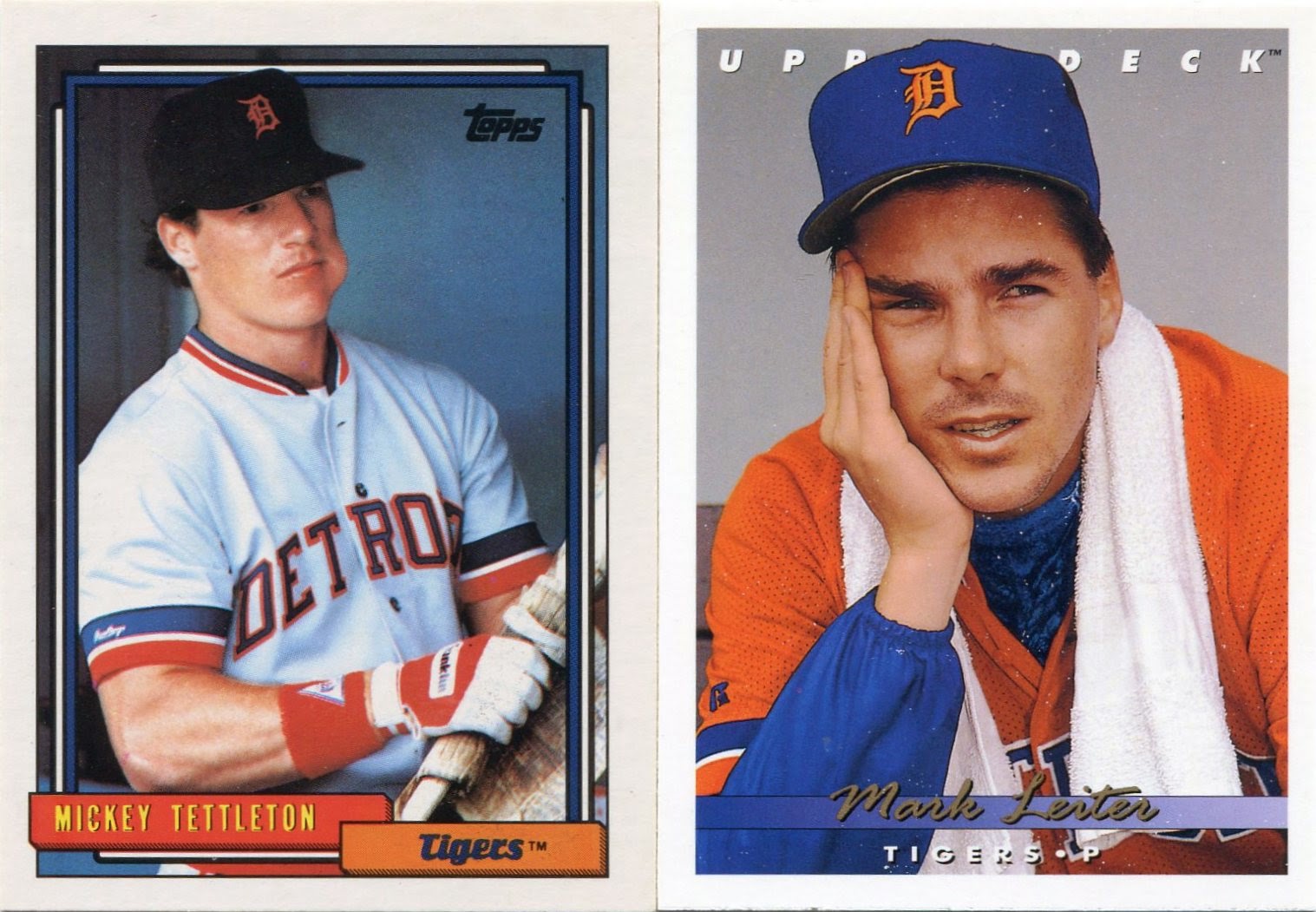 Mickey Tettleton has the bulging cheek of a veteran tobacco chewer.

Mark Leiter has the headache-infused look that would result from someone like me dipping.

Stay away from that wacky tobacky, kids, -3 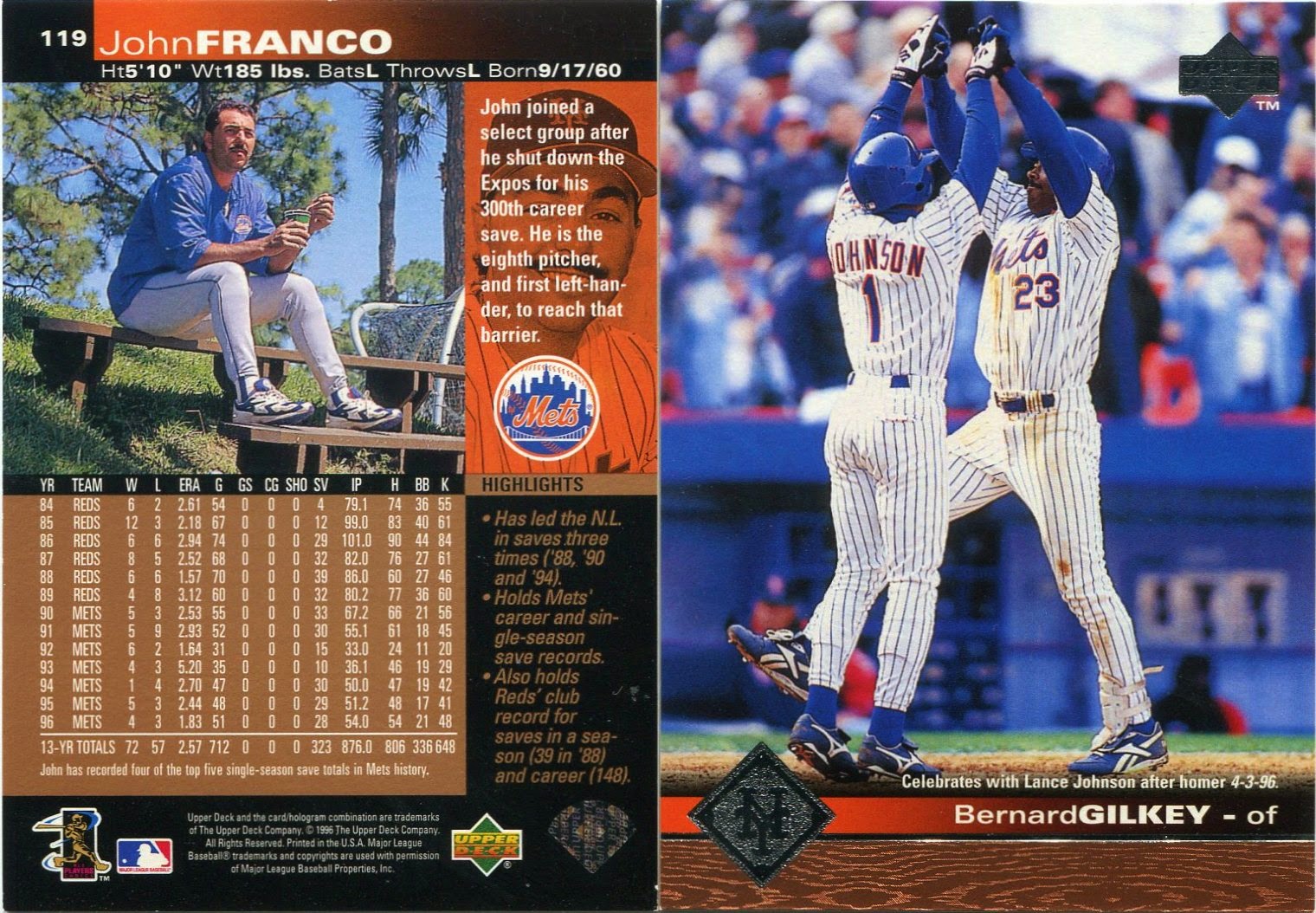 I've always considered 1997 Upper Deck to be one of the best sets ever.

The fact that UD pinpointed each shot to a particular date makes each and every card memorable. The backs feature some nice photos as well, including John Franco enjoying what looks like a snack of some sort.

If someone ever wants to start a '97 Upper Deck set blog, I'll be your first follower. 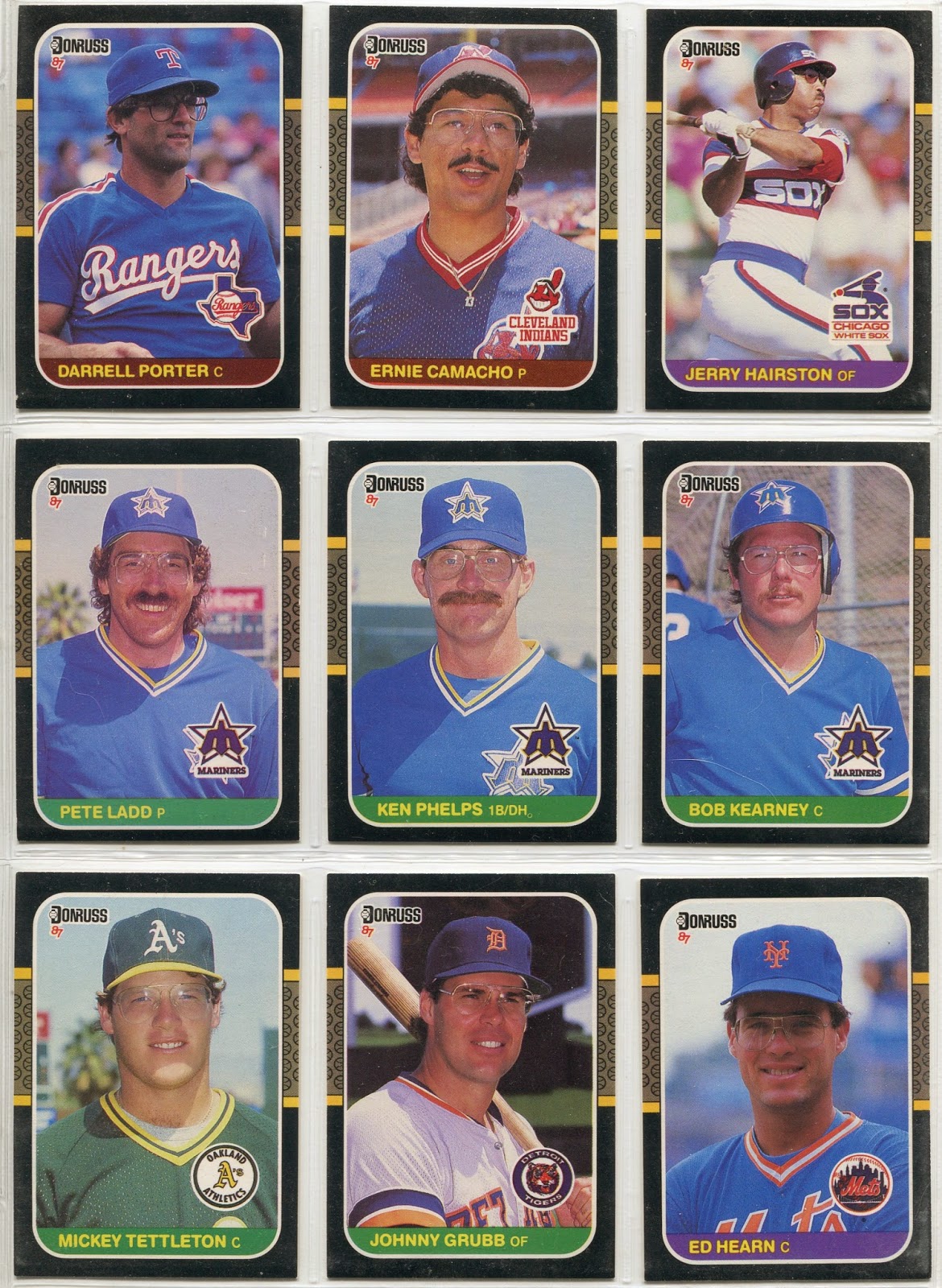 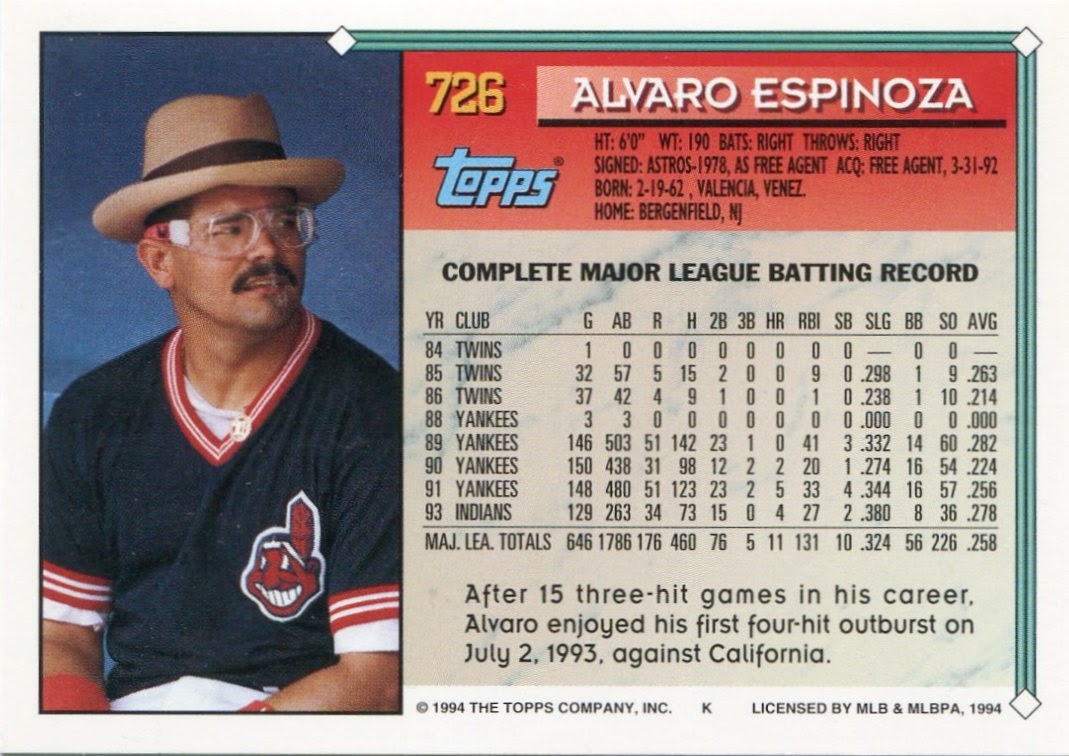 Aside from that, the thing that really grabbed me about Mr. Espinoza here (besides the fact that he and I share a birthday) is that strange hat.

I thought those went out of fashion in the twenties. 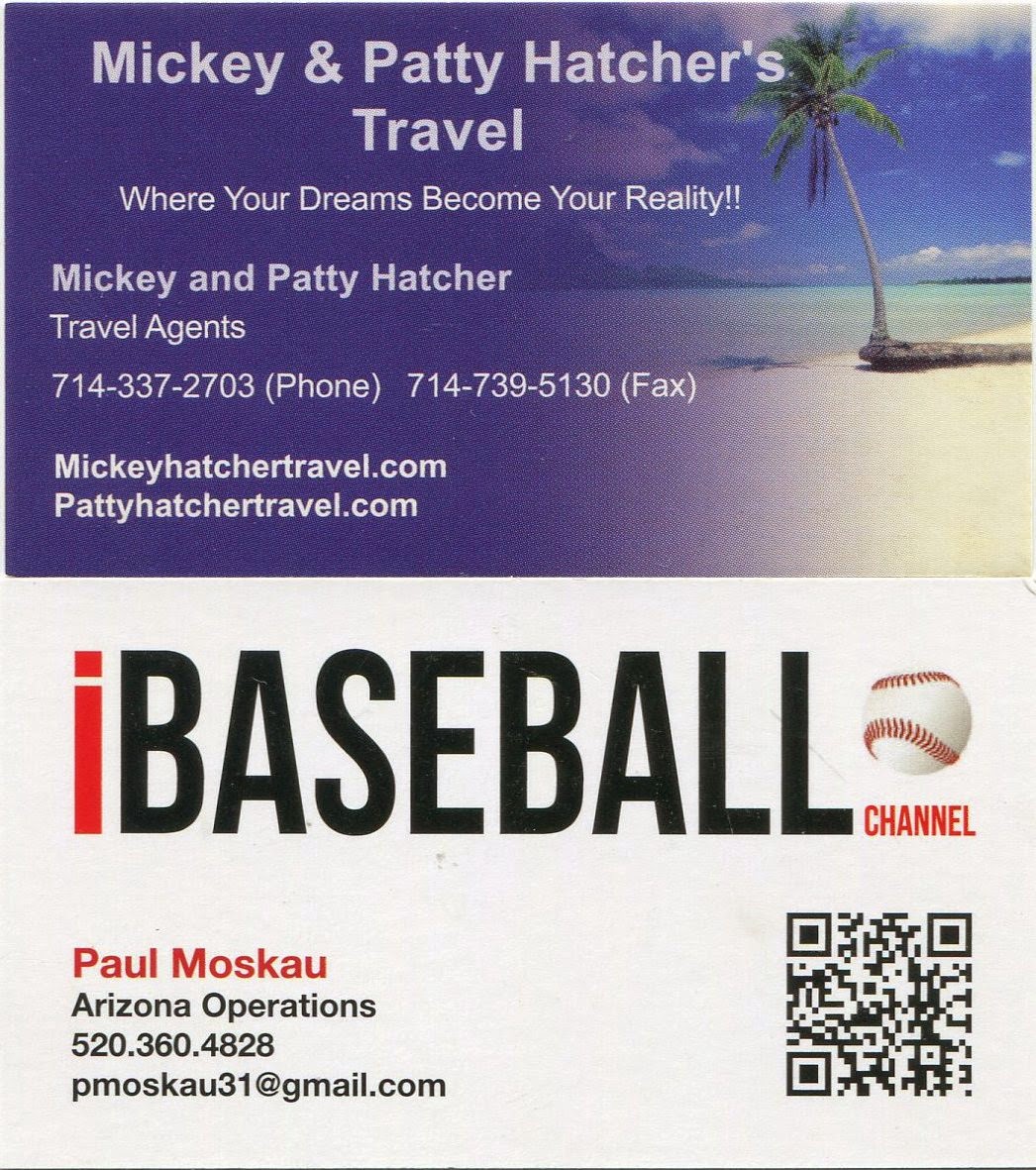 These are a couple of the most fascinating knick-knacks anyone has ever sent me.

What you see here are real, actual business cards from a couple former big leaguers.

Former Dodger Mickey Hatcher (and his wife) apparently ran a travel agency after he retired in 1990. Paul Moskau, a pitcher from the late '70s and early '80s, continued in the baseball biz after his career ended, from the looks of it.

Thanks to Jim, I now have business cards in my baseball card collection.

How many people can say that? 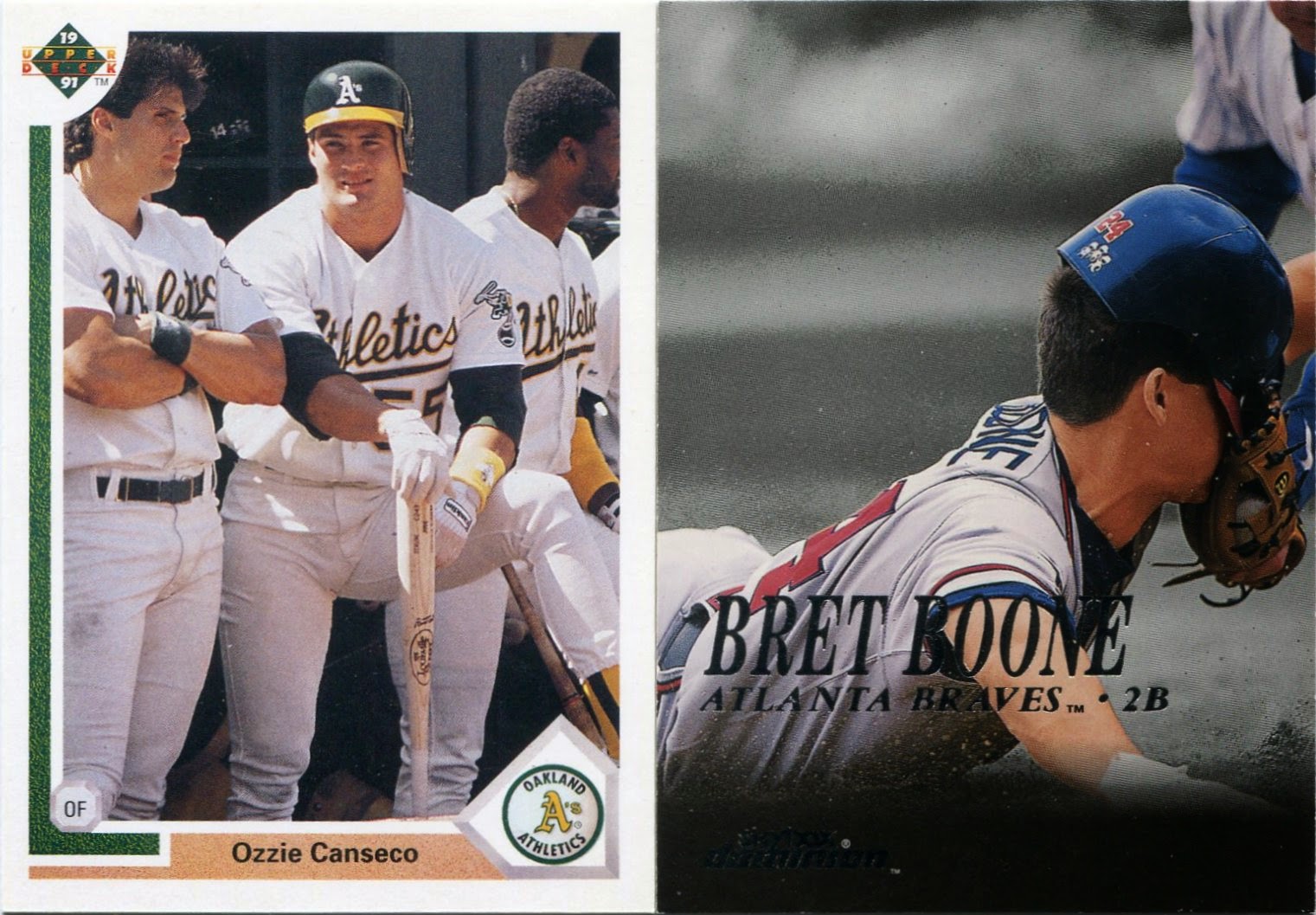 The UD Canseco twins are a poor man's version of Topps's O'Briens.

That Boone fascinates me on so many levels. It's hard to believe the people at the long-lost Skybox brand went through their photos and said Yup, that's the best shot we have. PRINT IT!

Maybe one of their workers had a personal vendetta against Bret Boone or something.

I can't think of any other explanation.

The Canseco twins, +2
The curious case of Bret Boone, +2 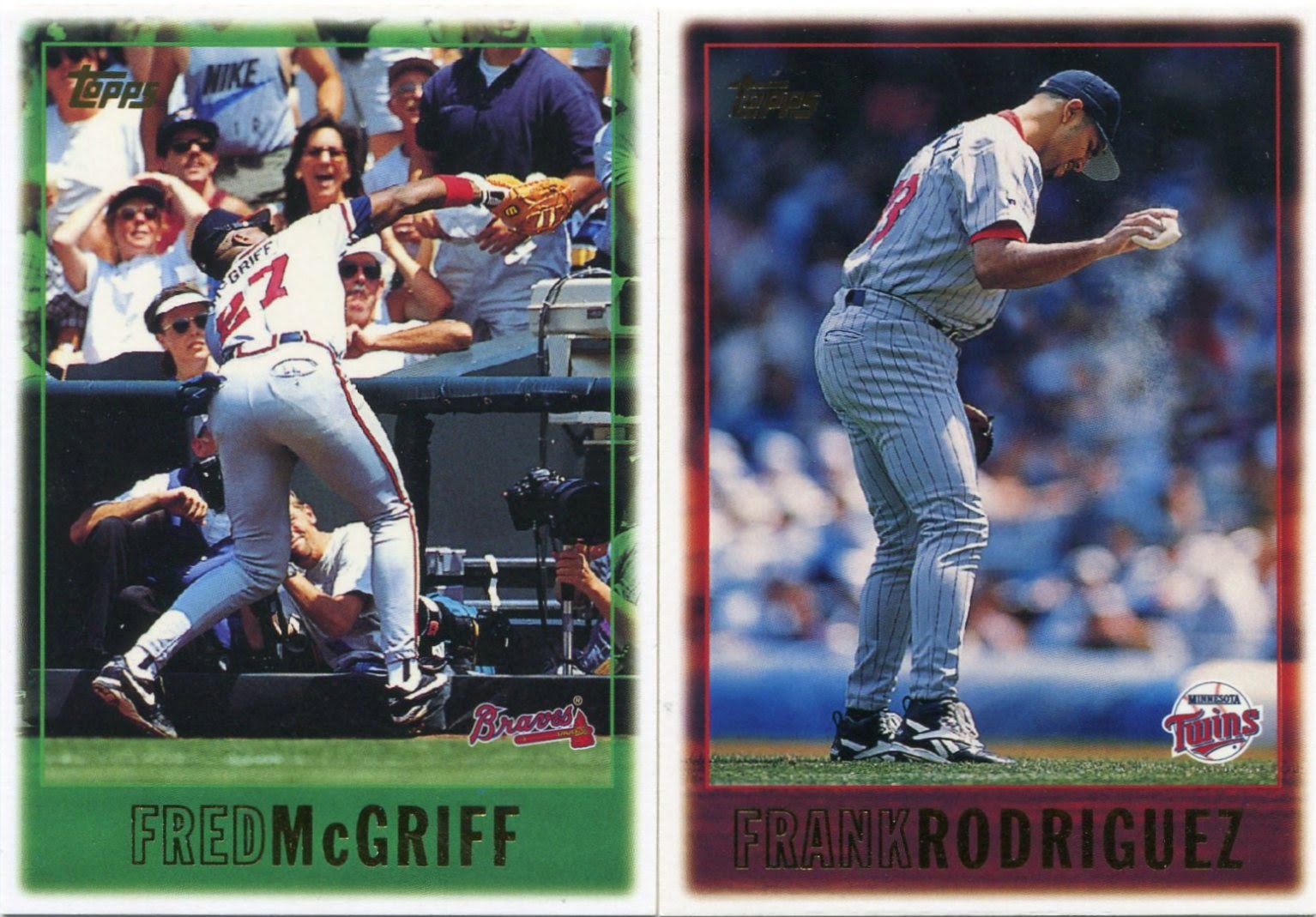 Maybe I've been giving 1997 Topps more hate than it deserves.

Between great crowd shots and rosin bags, it definitely has its high points. 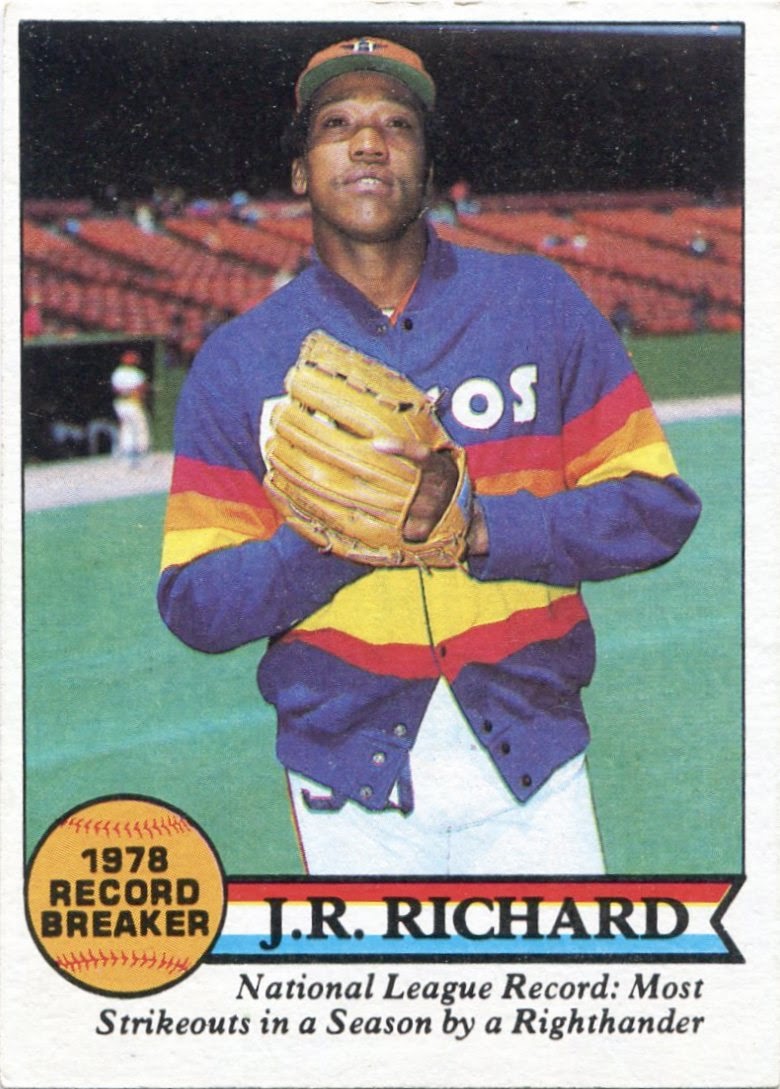 Jim closed out this custom repack extravaganza with a "Dime Box Dozen" hit.

For a long time, I believed I had all of J.R. Richard's Topps cards. That thought was shattered to pieces when I discovered this one. The fact that Richard had a '79 Topps Record Breaker issue had somehow slipped under my radar for my entire card collecting life.

I threw it onto my "Dime Box Dozen" list in a heartbeat. It sat there for about a month until Jim sent this repack over. With his help, I can now confidently and honestly say that I own J.R. Richard's complete Topps set.

It was a long time coming.

Well, it looks like we have a tie. Both stacks ended up with 55 points.

In the world of repacks, ties aren't like kissing your sister. It's more like kissing a hot date. This tie means that Jim put together one killer custom repack for me, one that was an absolute goldmine from start to finish.

A brilliant idea like this deserves a rousing round of applause. I don't know that I've encountered many better concepts in the world of trade packages during my time here.

I might just have to drop my very own custom-made repack on someone this year.
Posted by Nick at 6:29 PM

The custom repacks are a great idea. Ones in stores are mostly garbage.

as always, i enjoyed putting the package together. glad you enjoyed it, too!

I've got a few Ozzie Canseco cards.In fact I think the shop owner played me,charging me 5 bucks and change for his UD rookie card as a kid.I don't think It was ever worth that much,although I could be wrong.

Great pack! The Mary Poppins card I want it badly! It's one of my fav films besides The Sound of Music!
But the Bret Boone card is simply a sight to see. What a beauty..