In on the ground floor 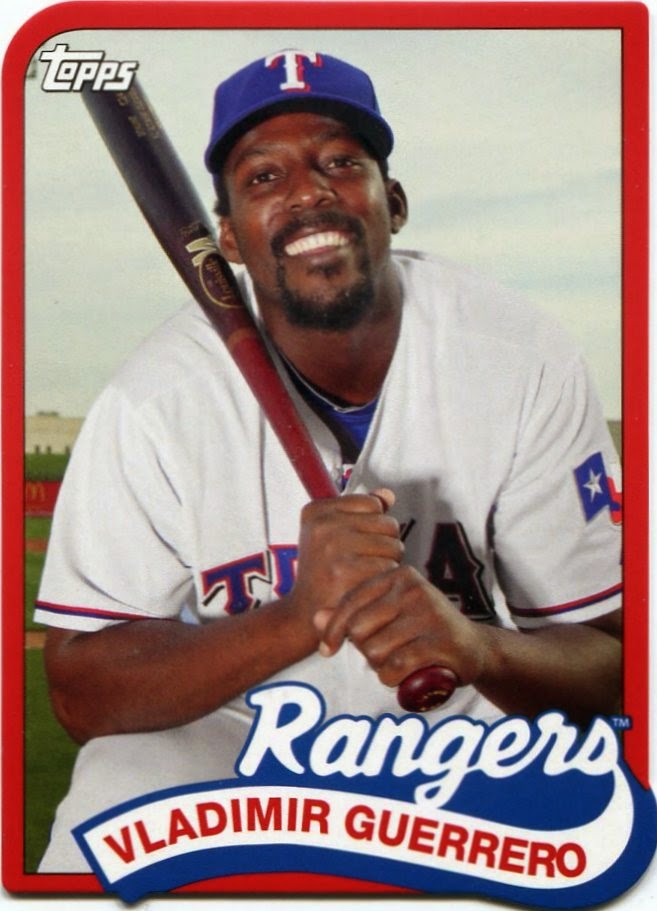 I've noticed a few "Blog of the Year" contests start to pop up these last couple weeks.

Those are all fine and good, but I don't necessarily think it's us veterans that keep the blogosphere chugging along. It's the newcomers just starting to try their hands at the blogging craft that really maintain the balance. After all, we were all "rookies" once.

Sure, go ahead and vote in the "Blog of the Year" polls if you wish. But remember that there are a ton of new writers out there to discover, all of which have the potential to become 2015's finest blog. Get in on the ground floor with some of the blogosphere's top prospects.

If I may, I'd like to recommend one for you. A reader named Tim and I had been exchanging emails over the past couple months. Then, one day in December, Tim made that magical leap from reader to blogger with his newly-christened blog "I Love the Smell of Cardboard in the Morning." (Now that's a blog name.)

He opens repacks, he goes to card shows, he's one of us. And, better yet, Tim trades as well. He and I recently completed what you could call a swap, although I think we might already be falling into that middle ground where we just decide to drop cards on one another as we please.

Tim kicked things off with a thick stack of now-former 2014 needs, including this odd Vladimir Guerrero mini from Update. Vlad was only a Ranger for one season in 2010.

While he was an All-Star that year, it's still strange to see him remembered in a Texas uniform. 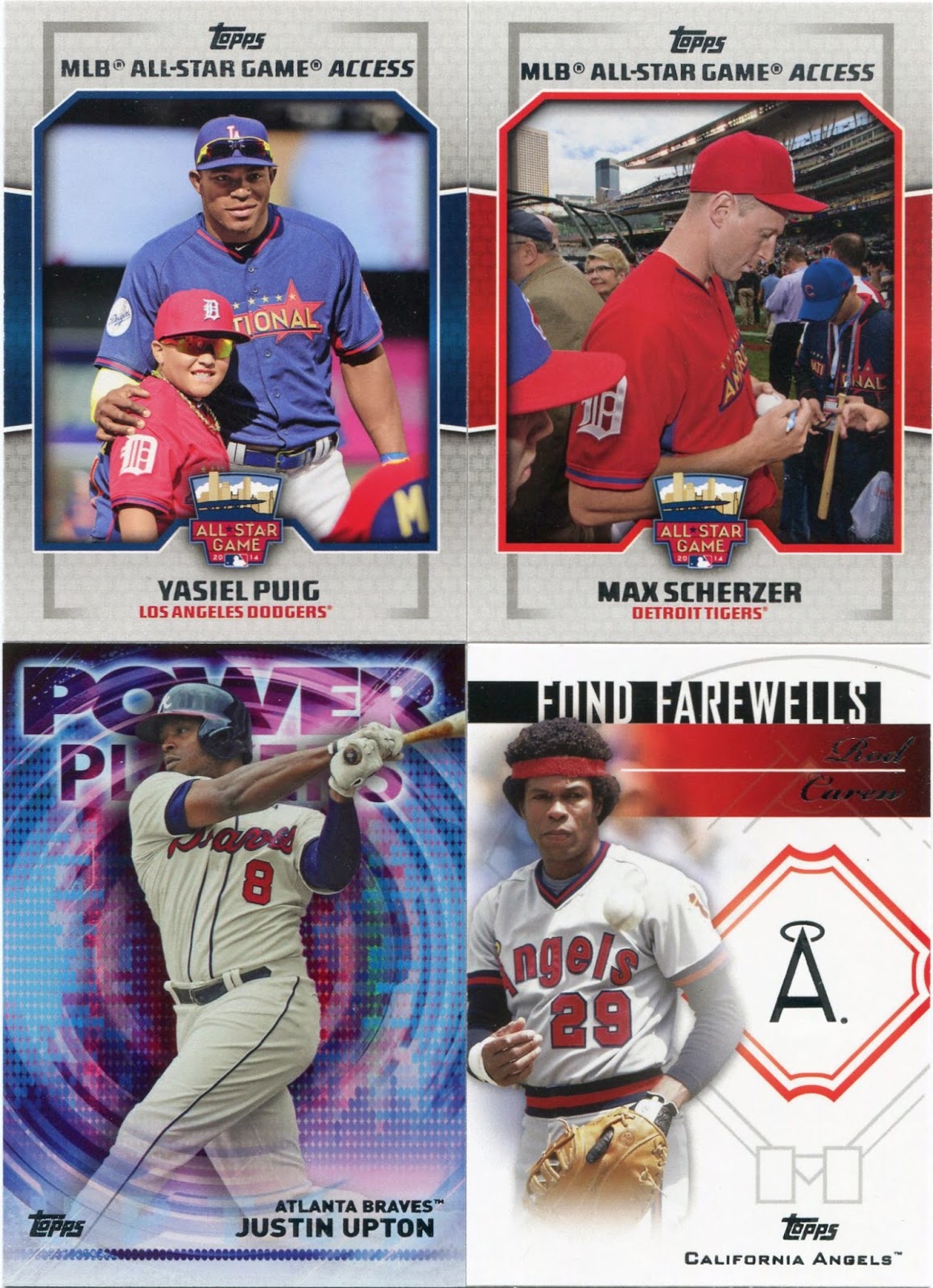 As I've said before, I wasn't crazy about any of the new inserts in Update.

Considering the amount of All-Stars Topps shoves into Update, the "Access" inserts at the top are especially redundant. I say that knowing full well that I enjoy both the "Miggy" cameo on the Puig and Scherzer's autograph shot.

There I go being a hypocrite again. 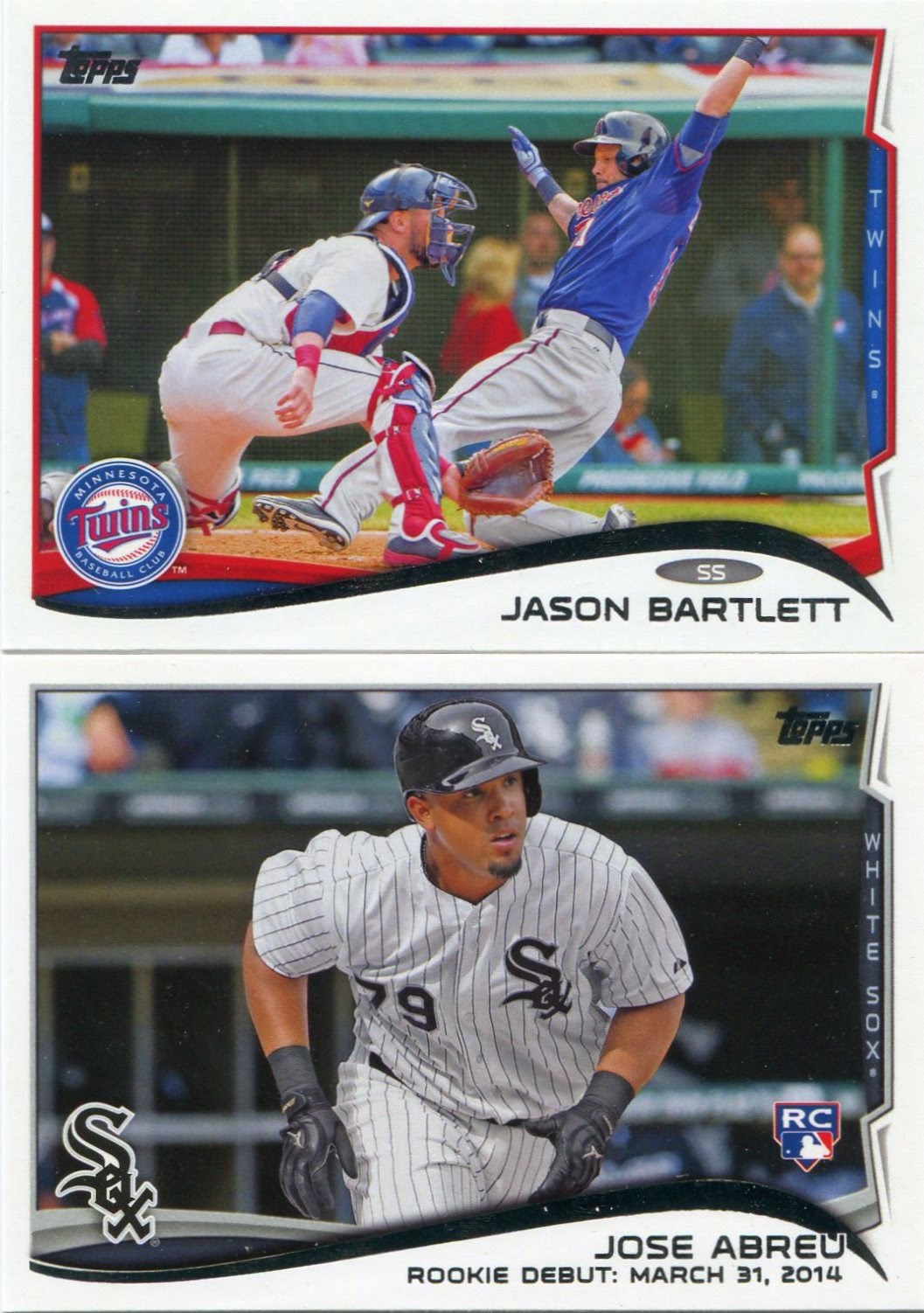 Tim knocked out my remaining Update base needs as well, a feat that allows me to sleep a little easier at night.

It makes sense that Jose Abreu would be included in Update. But Jason Bartlett? Admittedly, I'm probably the last person in the universe who still collects Mr. Bartlett, but I was shocked to see him represented at all in 2014. The guy played in exactly three games all year.

Guess those three games were enough to earn him a beautiful horizontal play at the plate shot. 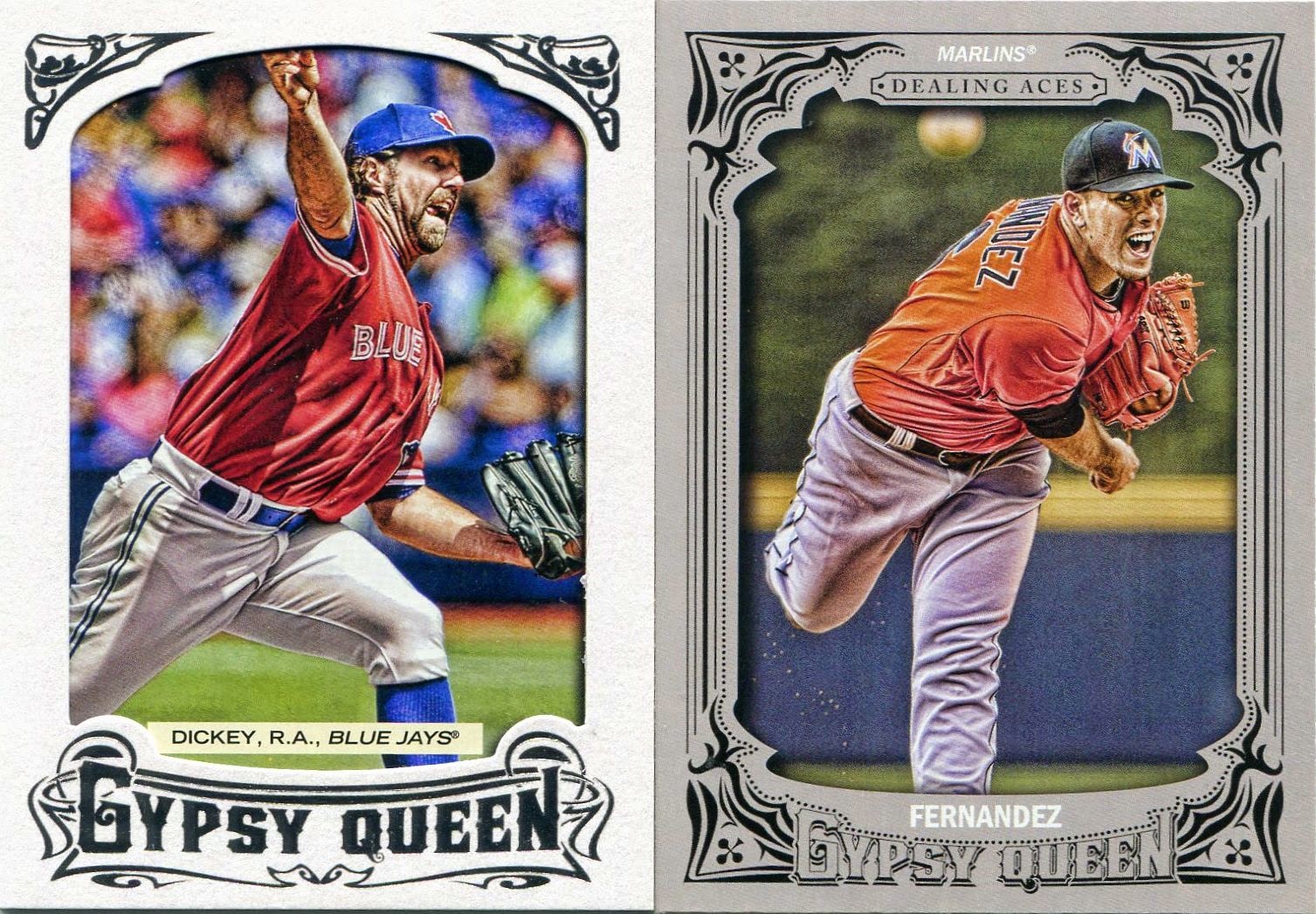 As you probably know by now, I'm not the biggest Gypsy Queen fan.

But, hey, I'm not going to turn down new cards of R.A. Dickey or Jose Fernandez. I'll also grant that those white border parallels are beautiful. They're quite a bit thicker than your normal GQ base cards. What we have there is a thick, white Dickey. 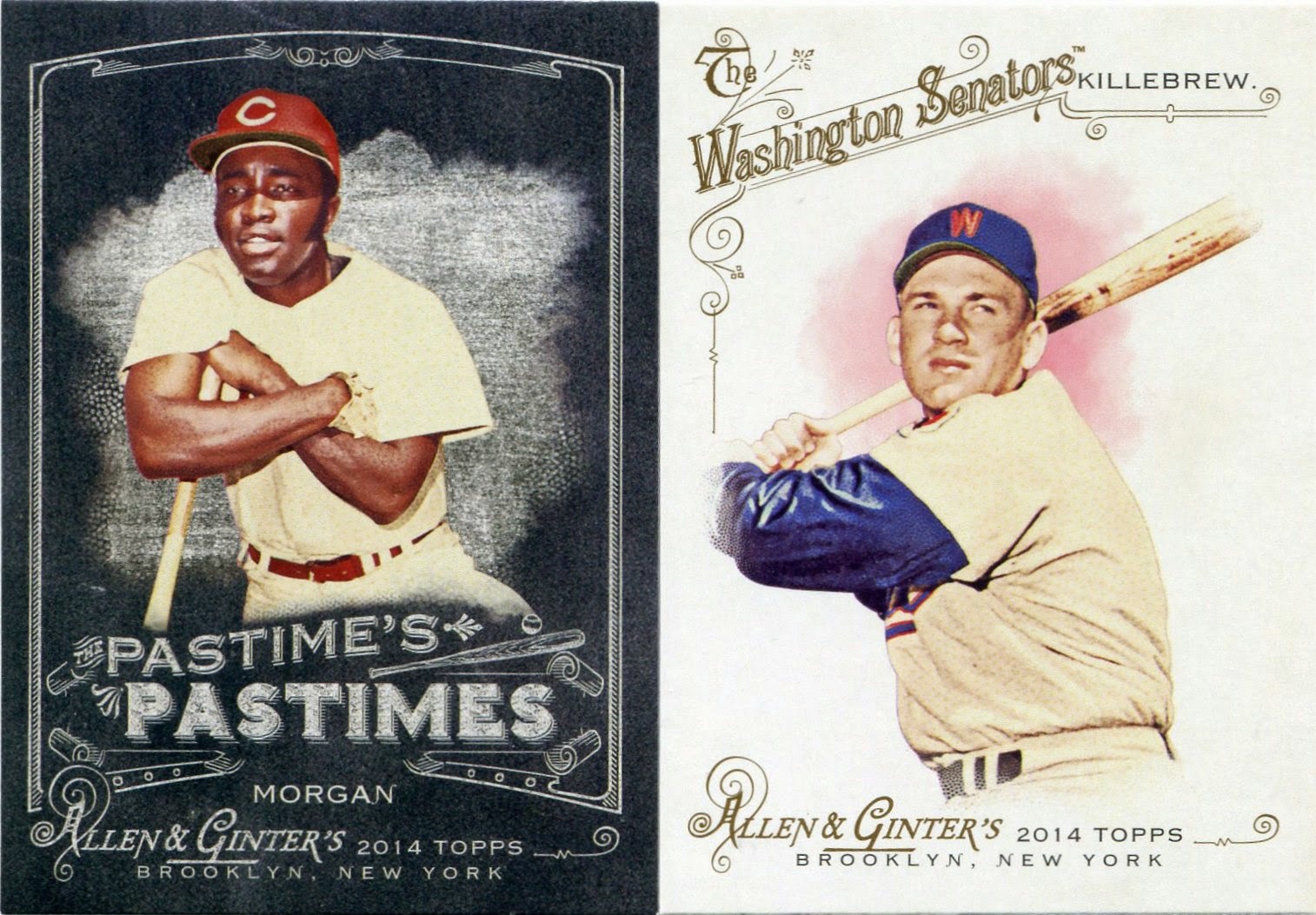 Tim also tracked down a few of my short-print and insert needs from A&G.

It does my heart good to see Senators cards popping up in 2014 checklists. And, by the way, Topps lists "broadcaster" as Joe Morgan's pastime on the back of that insert. 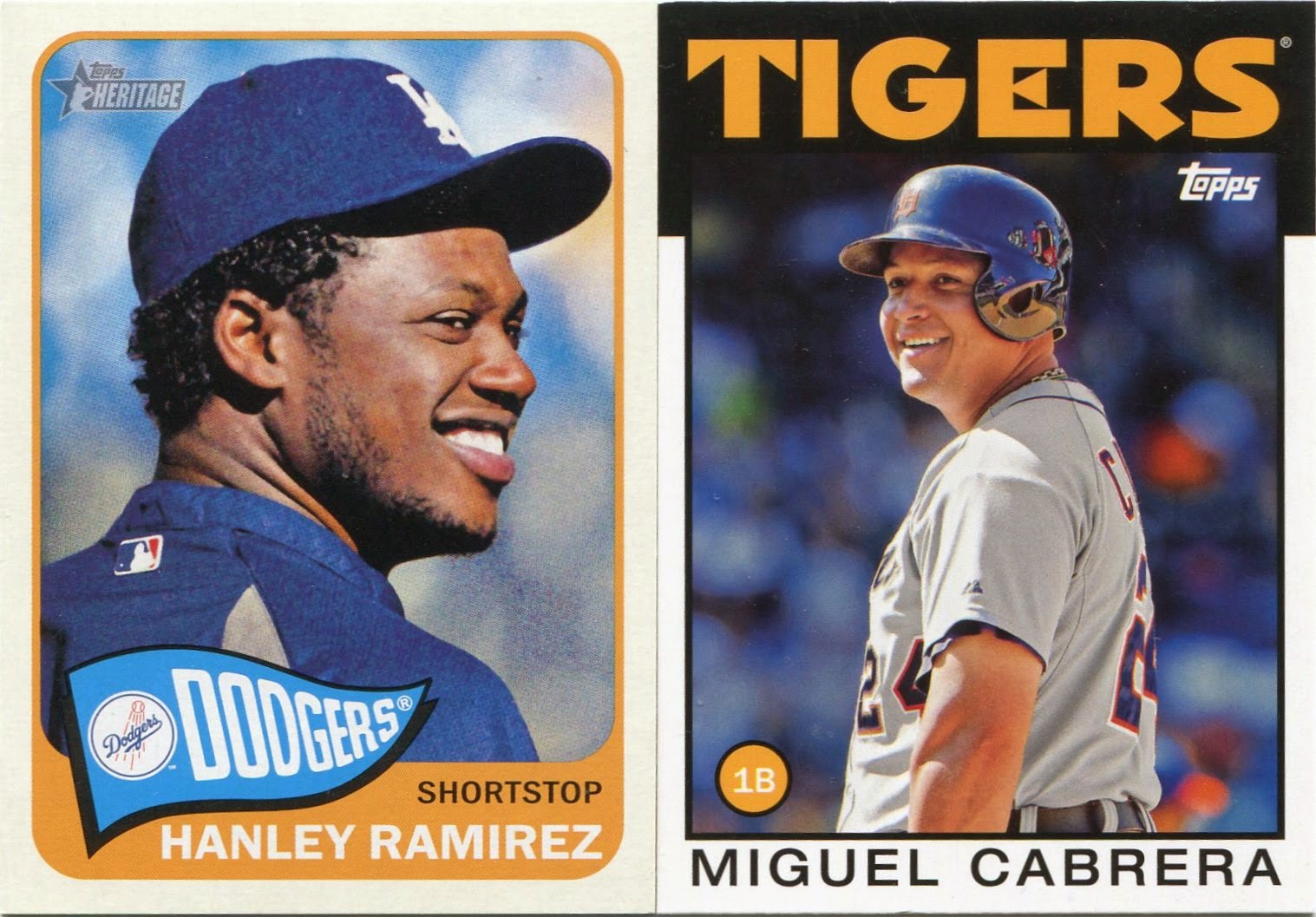 A couple of smiling ballplayers from Heritage and Archives.

Which reminds me, I should see the dentist soon. 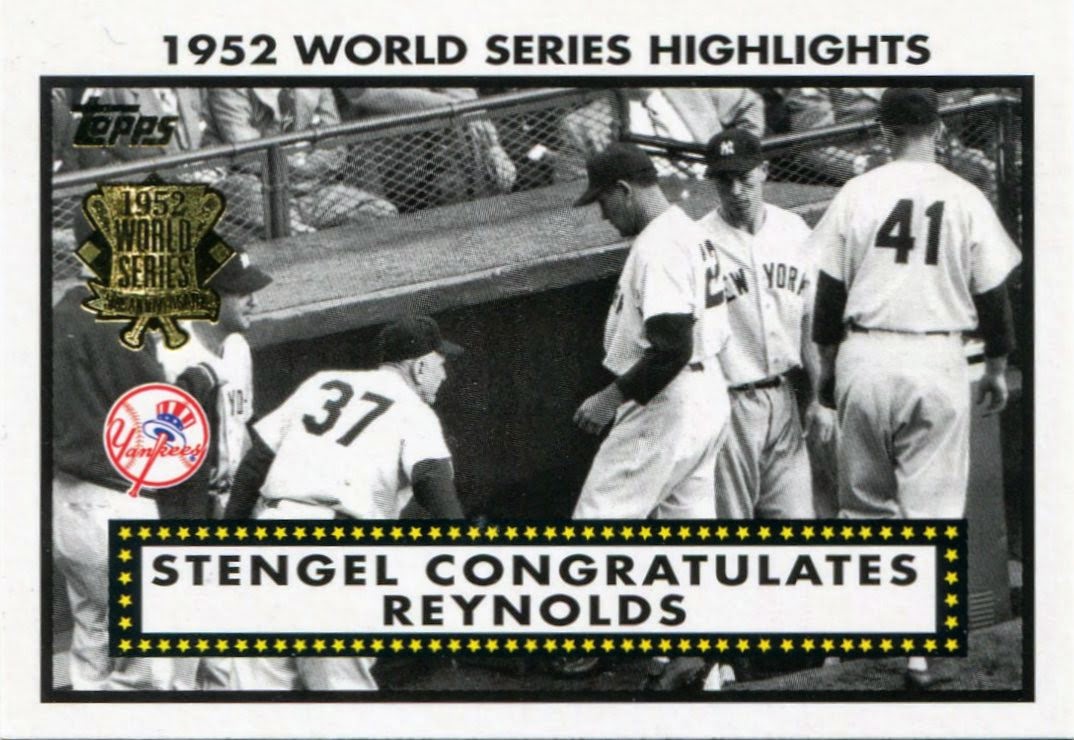 Ah, but Tim didn't make this package all about the latest and greatest.

The guy has a good amount of random in him as well, starting with Casey Stengel and Co. here. This obviously isn't a reprint of anything real, but I kind of like the idea of creating faux-World Series cards from the '50s.

Even if they are all Yankees. 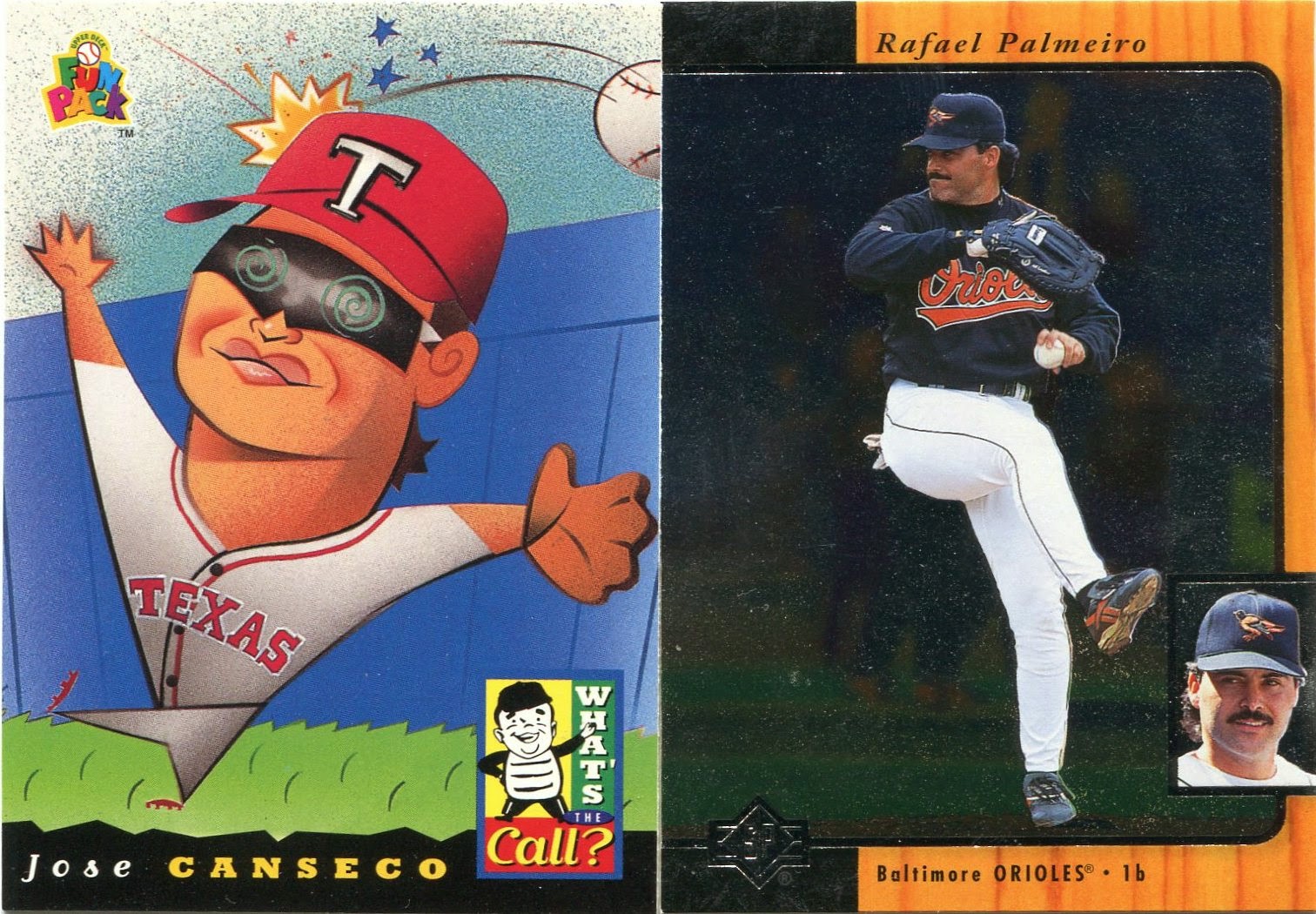 There aren't many ballplayers I dislike more than Jose Canseco and Rafael Palmeiro.

You could say that Tim did the impossible by sending along a couple cards that I actually like of those two jokers.

The cartoon Canseco is probably the only time his infamous blooper was ever commemorated on cardboard, and the Palmeiro is the rare example of a position player goofing around on the mound.

I guess even Rafael Palmeiro deserves to have a little fun. 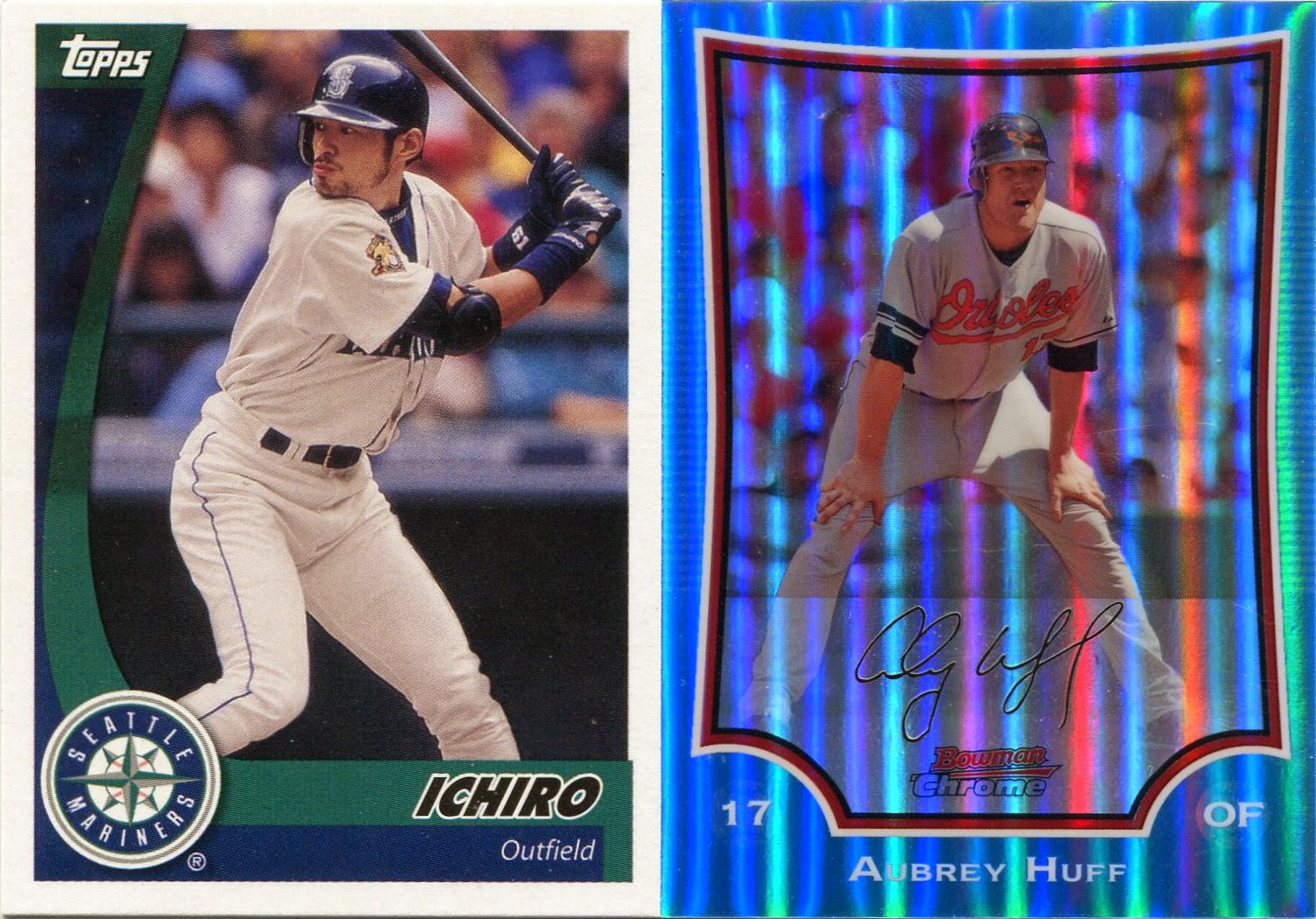 These are both fantastic new additions to a couple of my most expansive player collections.

Looks like I'll have to track down some of Ichiro's Marlins cards in 2015. 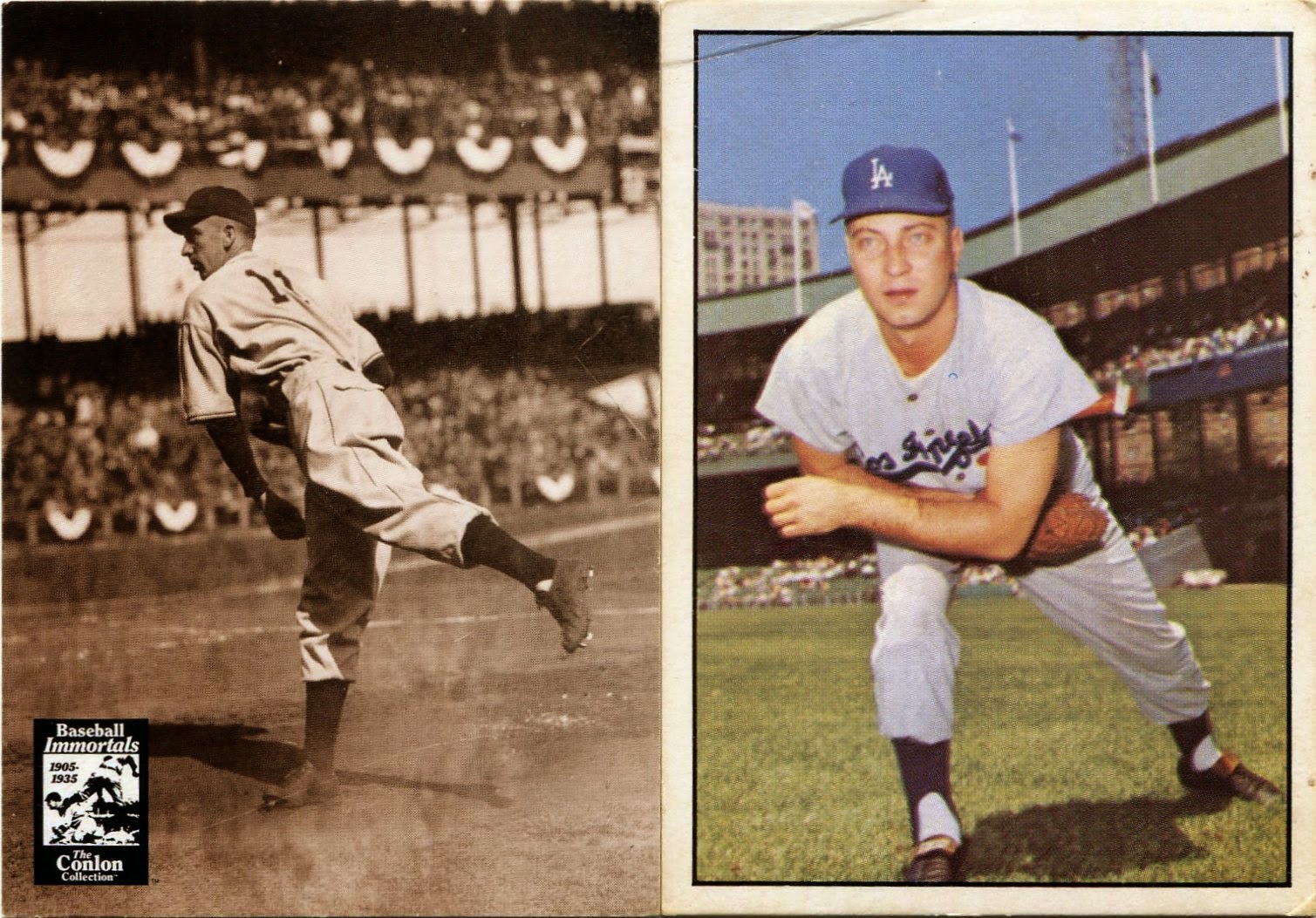 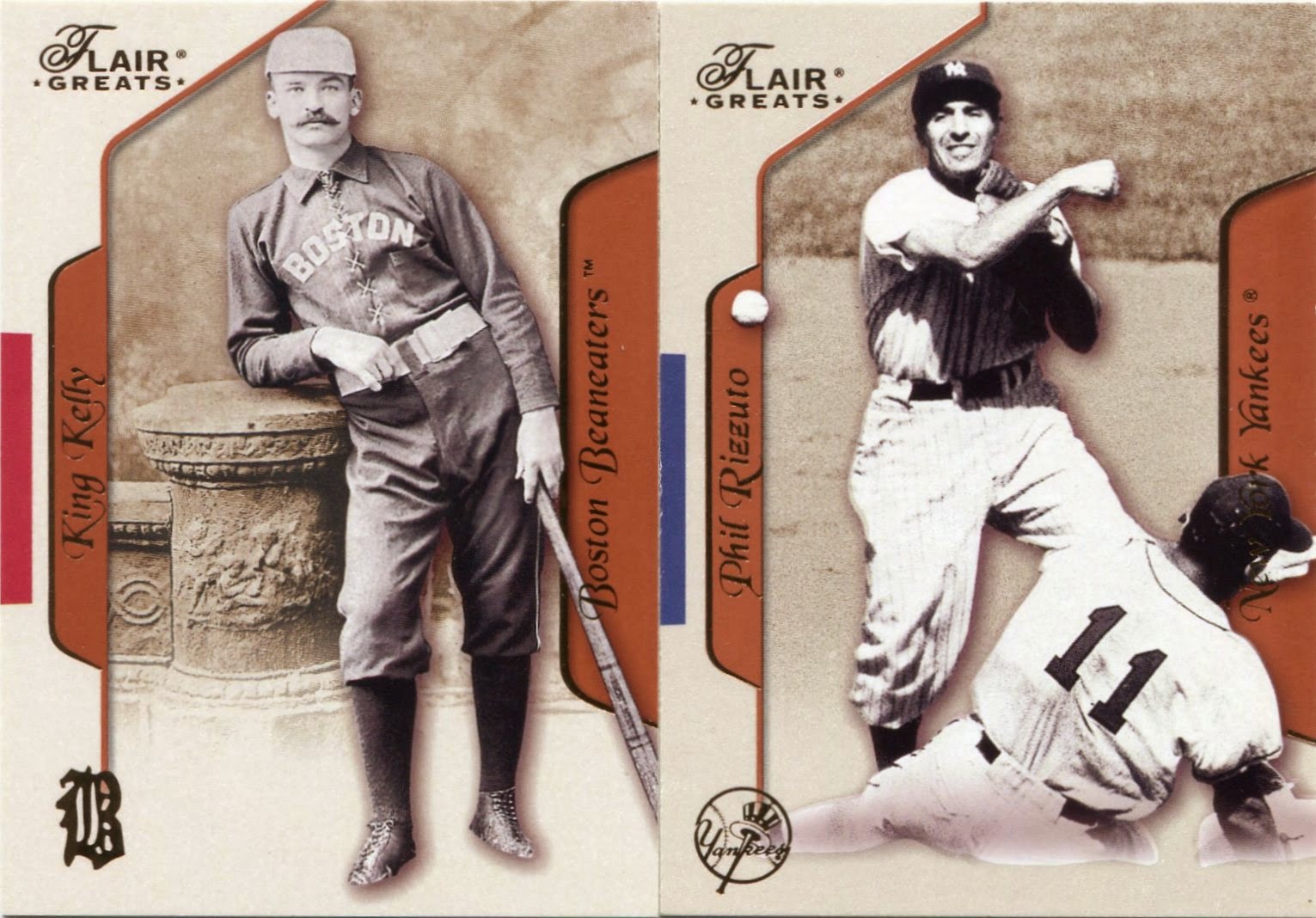 Although these aren't half bad, either.

It's not mentioned much nowadays, but 2003 Flair Greats was a wonderful set of old-timers. You can't find many cards of Phil Rizzuto turning a double play.

Heck, you can't find many cards of King Kelly, period. 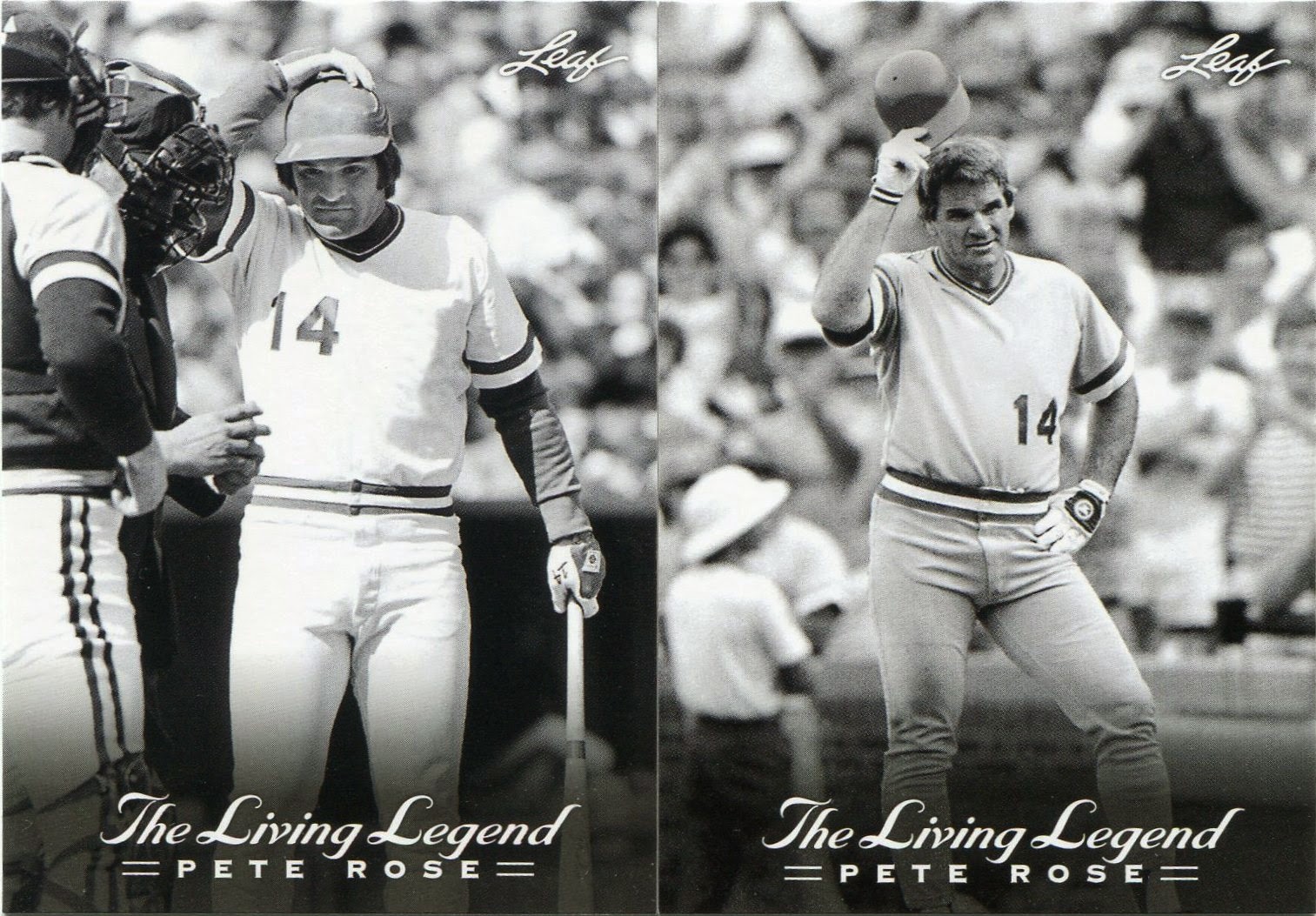 I'm almost ashamed to say that I enjoy this All Pete, All the Time set from Leaf.

With one autograph per blaster, it was an obvious money grab. But, while I want to believe otherwise, the cards themselves were actually decent. Maybe it's just because it's been so long since we've seen a whole lot of Pete Rose on cardboard.

The card on the left gives us a rare glimpse of an umpire checking for a doctored ball (with a Gene Tenace cameo), while the card on the right is a great addition to my new "tip of the cap" mini-collection. 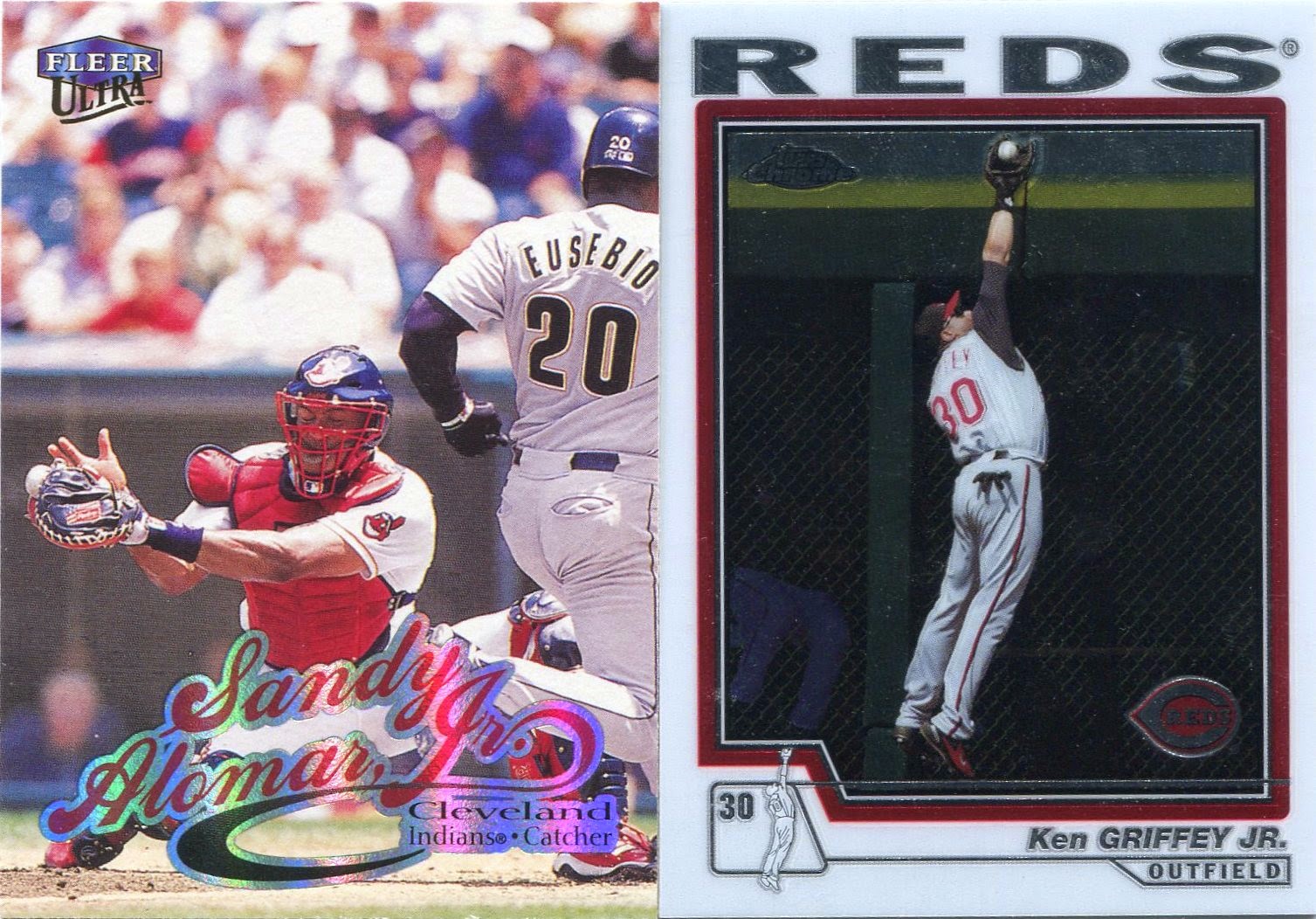 ...Tim threw his bags onto the mini-collection train as well.

The Alomar looks to be a botched play at the plate, but Griffey seems a split-second away from having that ball secured in his mitt.

"The Kid" was always good for highlight reel plays. 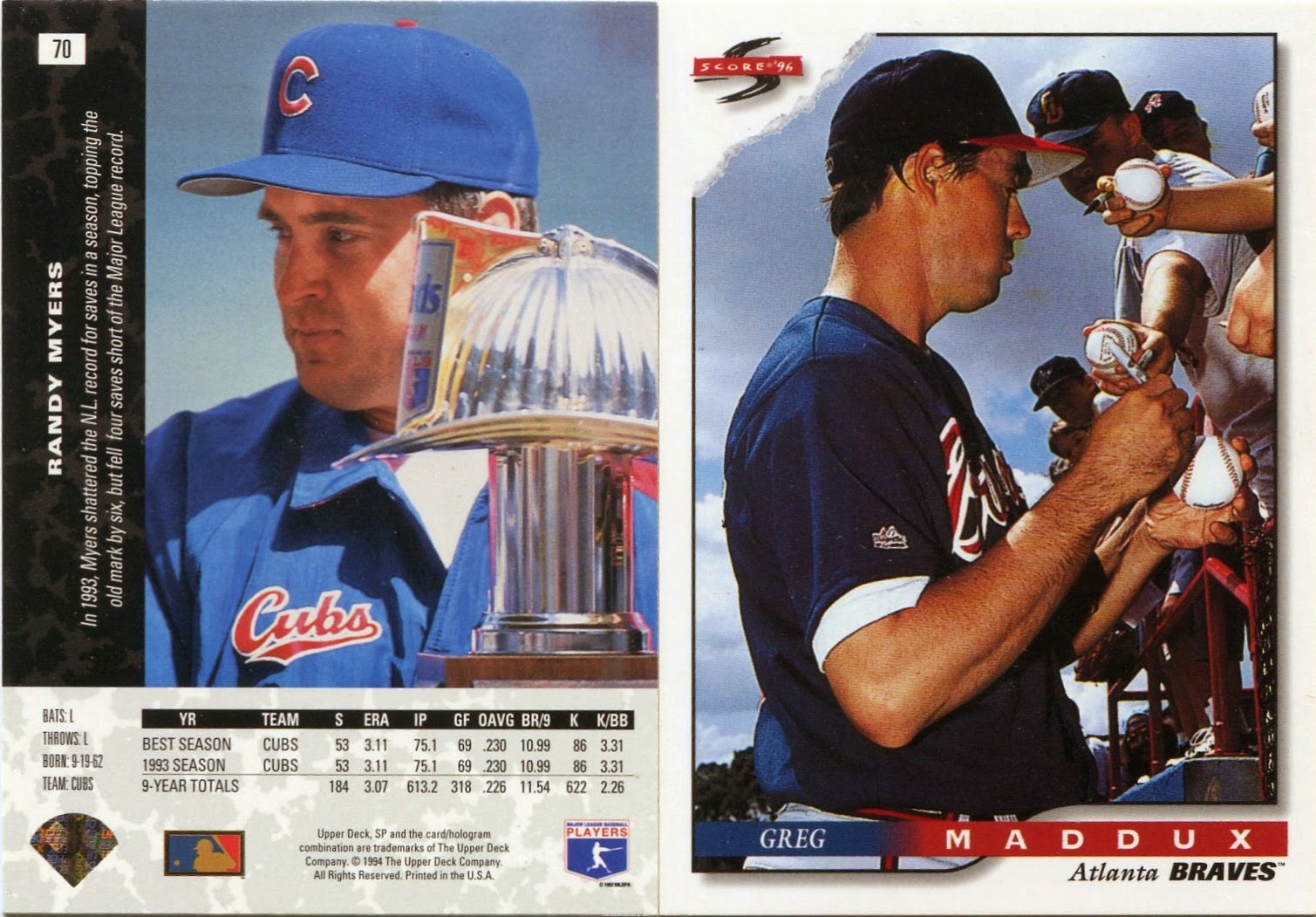 I don't know if anyone else got a chance to catch MLB Network's documentary on the "Nasty Boys" earlier this week, but I'd recommend giving it a watch if it ever reruns.

If anything, you'll see just how insane Randy Myers was. 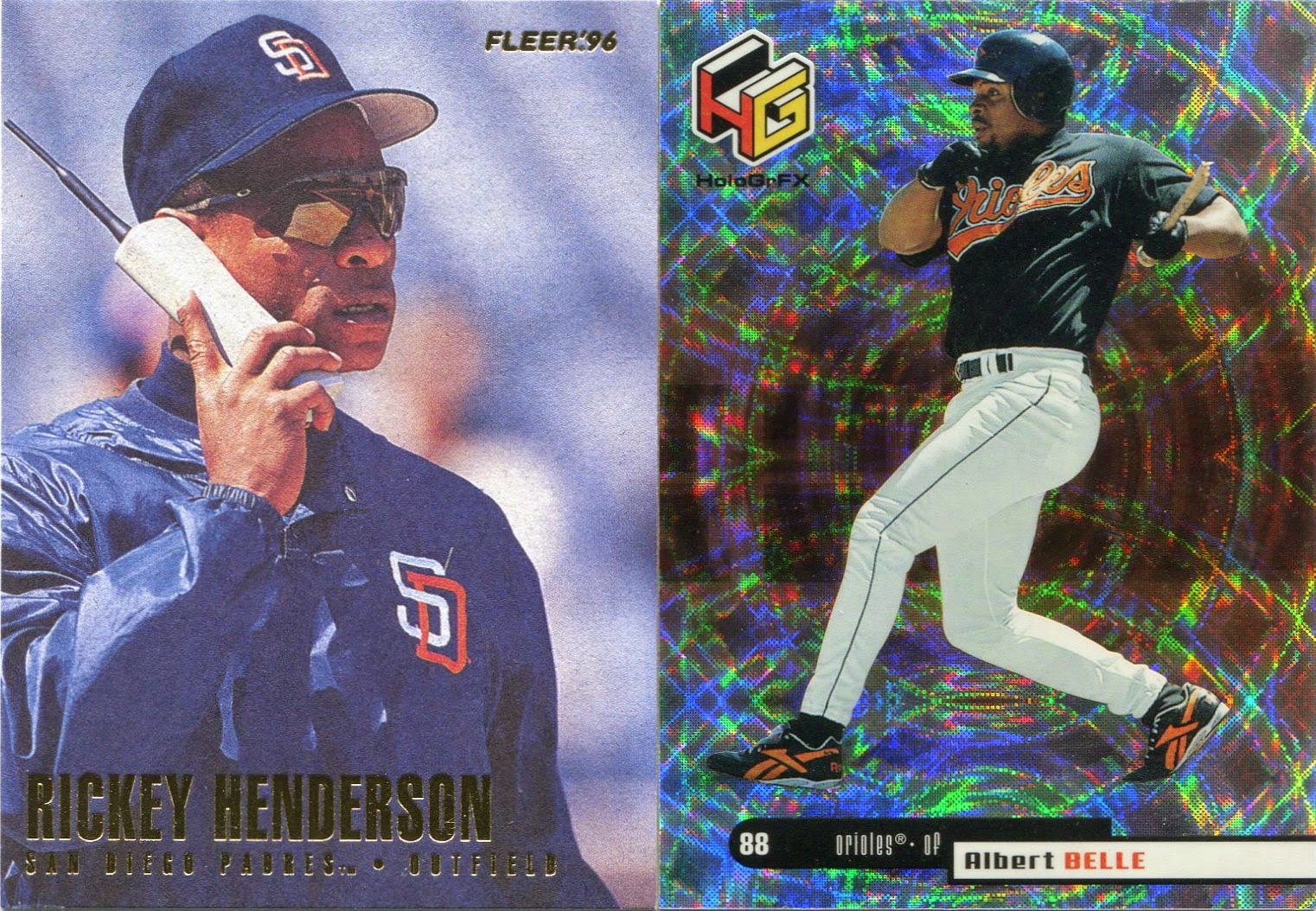 I haven't officially declared a "Can You Hear Me Now?" mini-collection yet, but I probably should.

If you look closely, you'll notice that Albert Belle is holding a broken bat in his hand. On second thought, scrap that. Don't look too closely at that card.

I don't want to be responsible for any seizures. 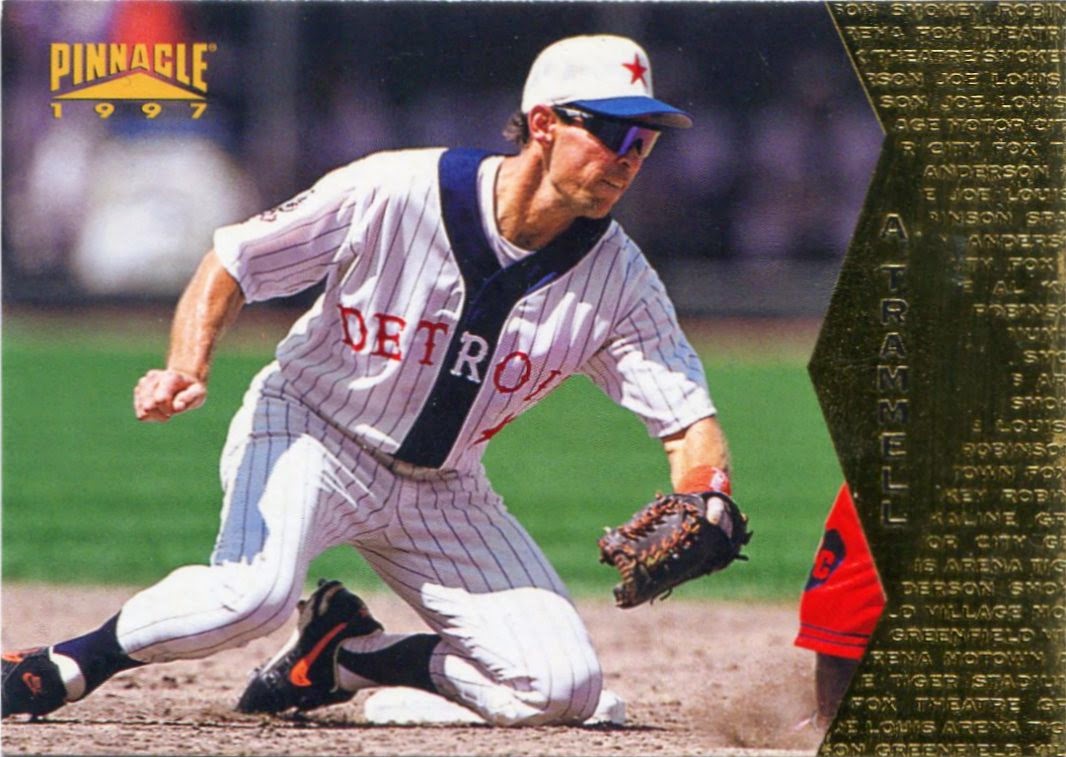 Tim closed out this spectacular package with a bang.

Not only is this a top-notch throwback shot (complete with duds from the Negro League's Detroit Stars), but it also doubles as a sunset card of Mr. Trammell.

I guess even the most fun-filled packages have to come to an end sometime. Then again, Tim has since dropped another magnificent batch of cards on me, which I'll be recapping in my next post. (To Be Continued...)

In the meantime, please go give Tim's terrific new blog a read. Go give all the new blogs out there a read.

I know it sounds corny, but the fact people take valuable time out of their day to wax poetic about these silly little baseball cards makes every blog the "Blog of the Year" for me.

Keep on writing, everyone.
Posted by Nick at 6:00 PM

Thanks for the kind words Nick. I'm glad you enjoyed the package as much as I enjoyed putting it together. WOW, that Albert scanned crazy!

I sent your package out a while ago, but never heard if you got it or not. Sorry to be that person that just comments randomly, but just want to make sure! Thank you!

You're too modest, Nick ! In any case, that blog name is absolutely perfect, I love it. And great cards, too, Tim seems like my kind of collector too

What is that Topps Ichiro? I don't reecognize it.