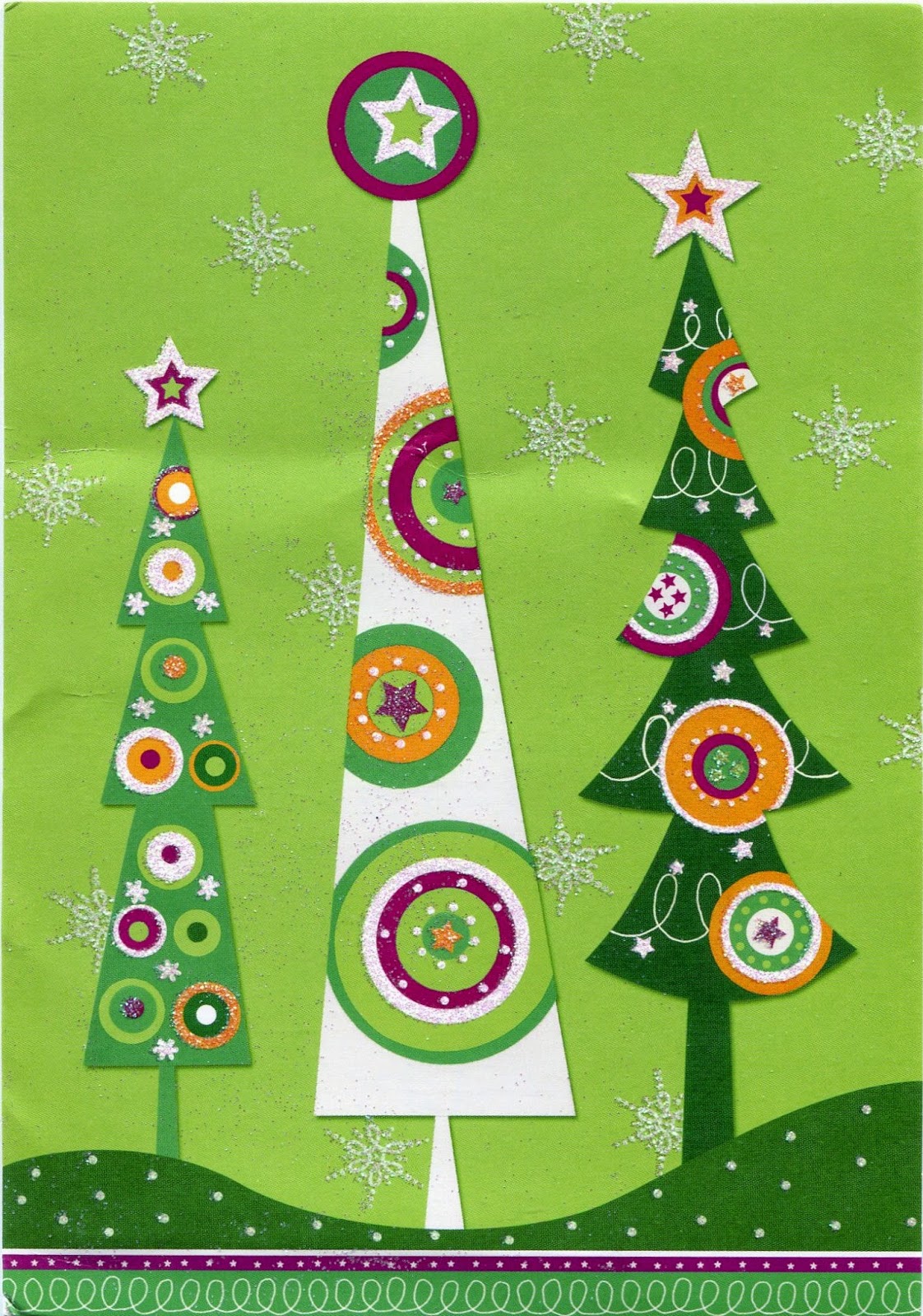 I was lucky enough to get a few nice Christmas cards from fellow bloggers this holiday season.

It's heartwarming to receive this kind of gratuity from people I've never even met before. That's one of the beauties of having a blog, I guess. I feel like I've met all of you by reading what you write on a daily basis, even if I've never actually shook hands with most of you.

This thoughtful Christmas card arrived from Julie, one of my newest blogger buddies and the mind behind the terrific blog "A Cracked Bat: Baseball Cards and A Hot Dog." While she hasn't blogged in a while, I know Julie has still been throwing awesome trade packages all around the blogosphere as of late.

The Christmas card she sent me was probably the best one I've ever received. 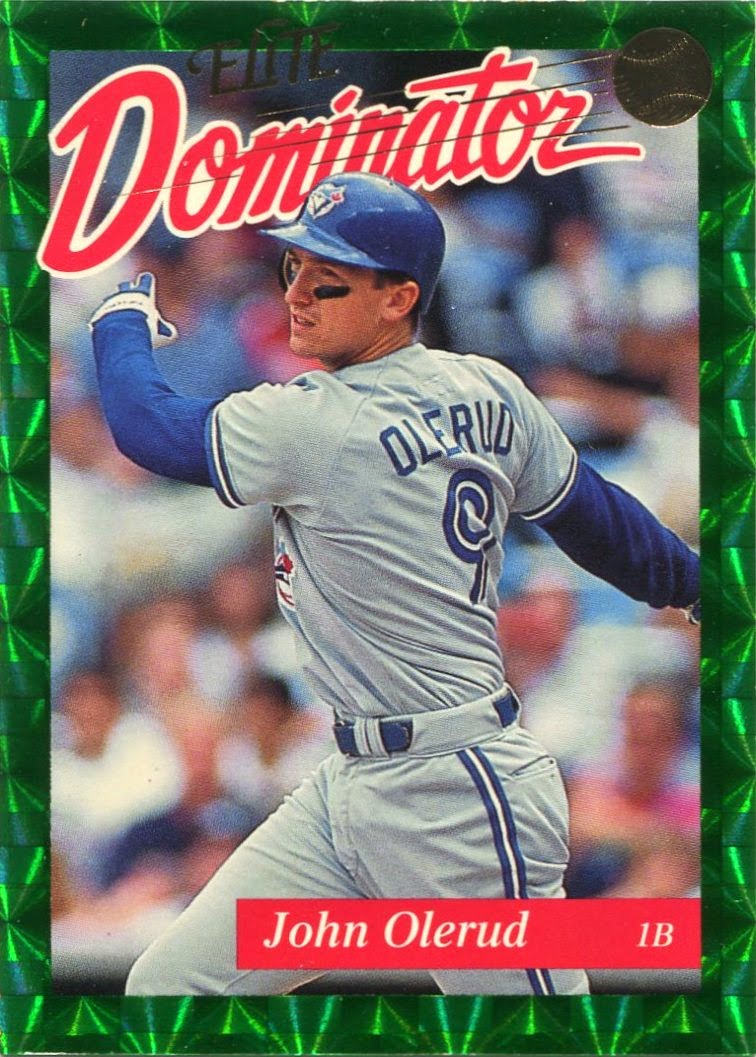 That's because actual baseball cards fell out of it.

They were like early holiday gifts for me. The fact that I haven't gotten around to posting them until now makes it feel a bit like Christmas in January. (Doing a better job of catching up on trade posts will be one of my big 2015 resolutions.)

From what I understand, these Donruss "Dominator" inserts caused quite a stir back in the day. This beautiful Olerud (numbered to 5,000 copies) is the first one I've been lucky enough to add to my collection.

I can see what all the fuss was about. 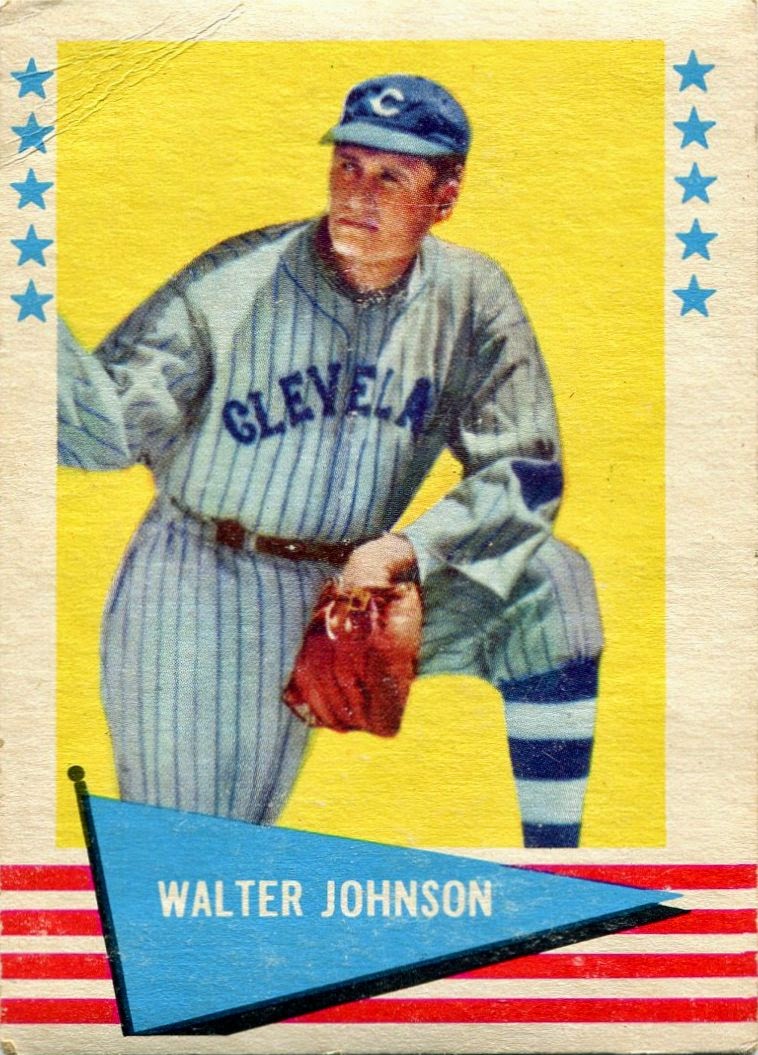 If you ask me, though, I think "The Big Train" here managed to top Mr. Olerud.

I've always been fond of the 1961 Fleer Greats of the Game design, although I seem to be one of the few. It was one of the first all-legend sets, and was really only brought about because Fleer couldn't wriggle any then-current players away from their exclusive Topps contracts.

The thing that really stands out about this particular card is the uniform Walter Johnson is wearing. "The Big Train" was a career Senator, but those are Indians pinstripes he's sporting there.

One little tidbit that tends to get lost to baseball history is the fact that Johnson managed in Cleveland for one full season and parts of two others after his playing days were over.

When you put it all together, this is easily one of the best "unfamiliar uniform" manager cards out there. 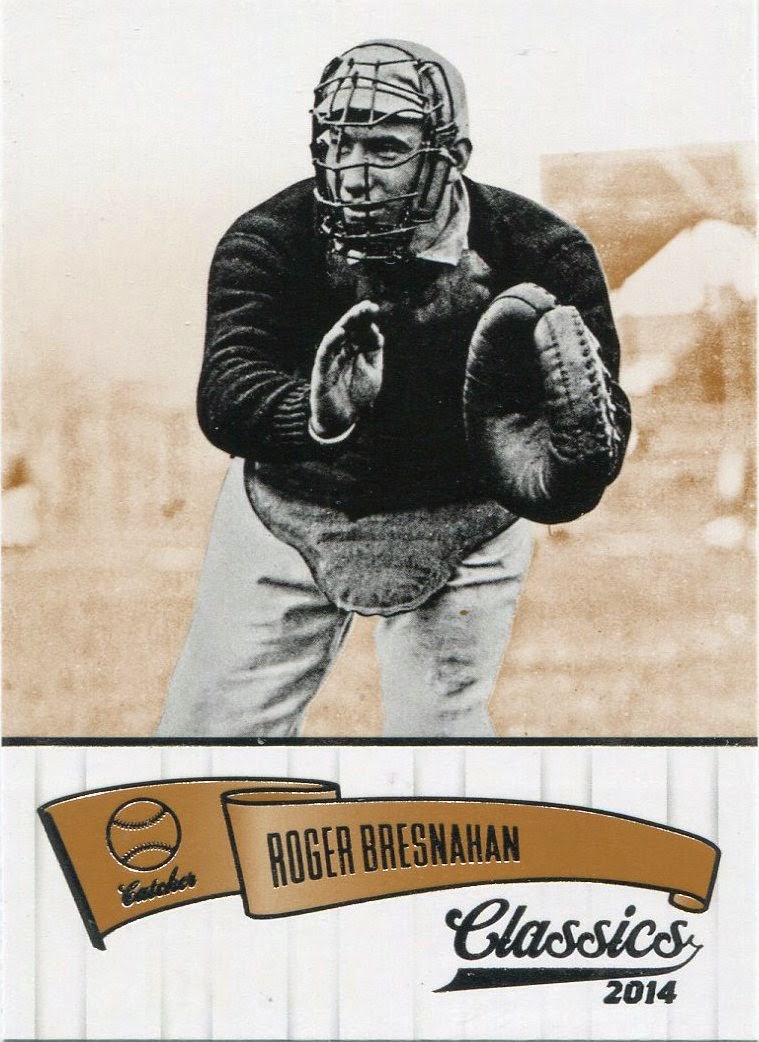 Julie had actually dropped another package on me not long before her holiday envelope.

I fell in love with this Roger Bresnahan card from the moment I first saw it on Julie's blog. It comes from the largely ignored 2014 Panini Classics checklist. I told Julie to keep me in mind if she happened to come across any extras of it. Happily, she did, and my eyes lit up when it fell out of the package.

If you're at all a fan of catcher's gear, this is the card for you. You've got a primitive face mask, chest protector, and oven mitt-esque catcher's glove all in one shot. (Bresnahan was also the pioneer of shin guards, though it looks like they're cropped out of this photo.)

An image like this deserves a spot in Cooperstown, but I get it on a simple two-by-three baseball card.

While the Bresnahan was the real jewel of the lot, Julie was nice enough to send a few other Panini Classics my way.

This set didn't go the retail route (from what I know), so I didn't get a chance to open any packs of it. The design is an overall meh, but the great player selection is right up there with Panini's usual standards.

Whether you like Freddie Freeman or Satchel Paige, you're bound to find something. 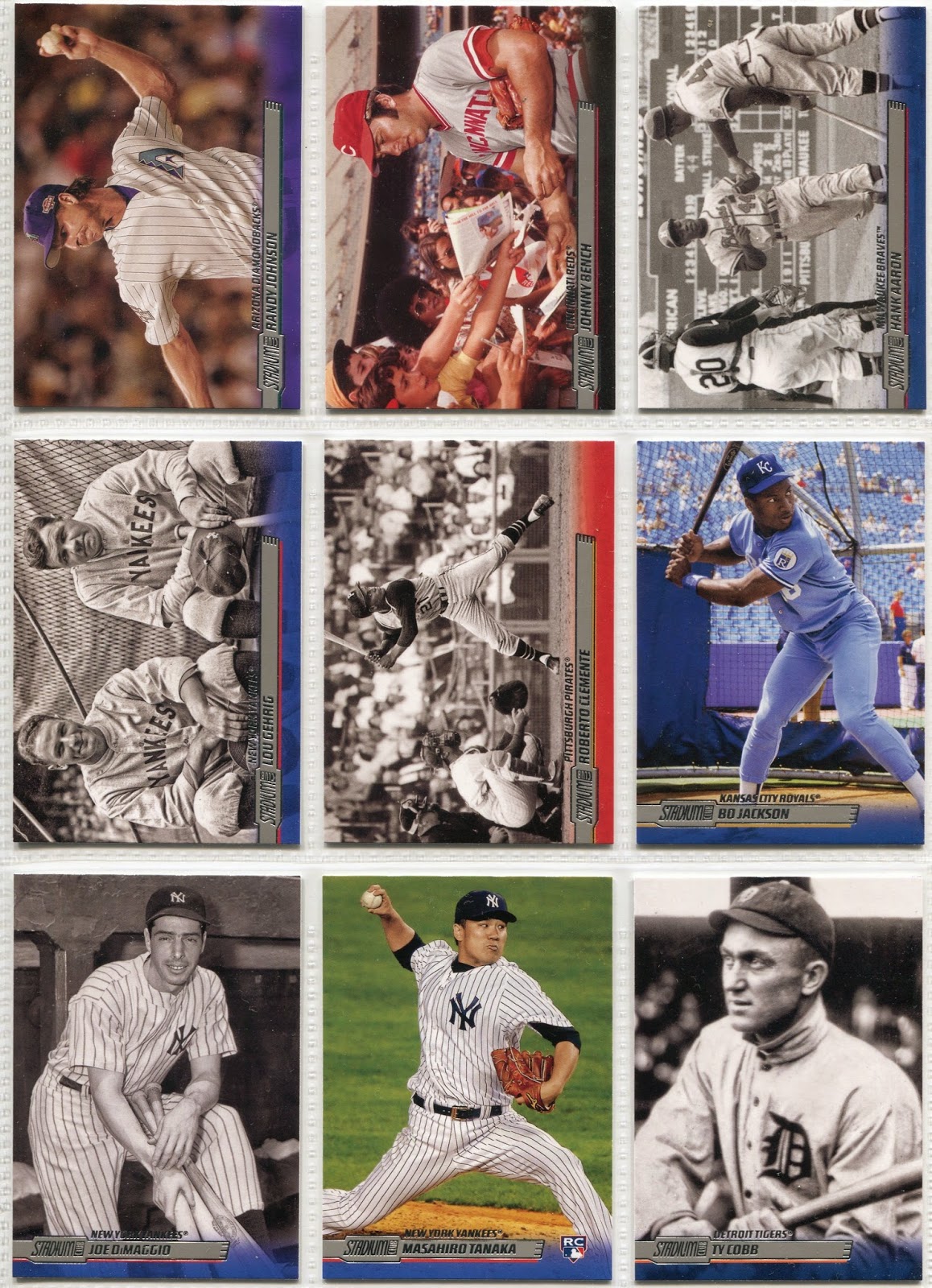 Also included with the Classics was a nice helping of singles from the Set of the Year, 2014 Stadium Club.

Most of the legends and big rookies were carefully plucked out of the SC dime box I found in November, but Julie helped tie up a bunch of the loose ends.

While I didn't think it was possible, this star-studded selection made me love Stadium Club even more. 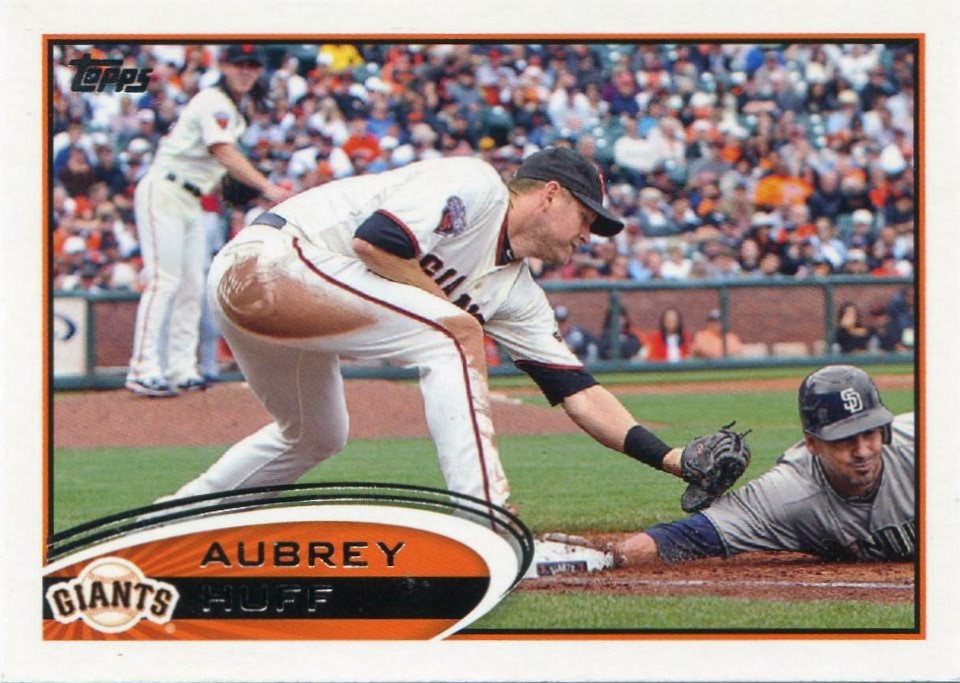 You'd think Julie would want to stop there.

But before the Christmas gifts and before the Classics/Stadium Clubs, I found another package from Julie waiting on my doorstep.

This assortment was, for lack of a better term, all over the place. That's definitely the way to go here in Dime Boxedonia. The fun started with this 2012 Topps Mini of Aubrey Huff, the man behind one of my more prominent player collections.

I hadn't noticed the Tim Lincecum cameo until just now. 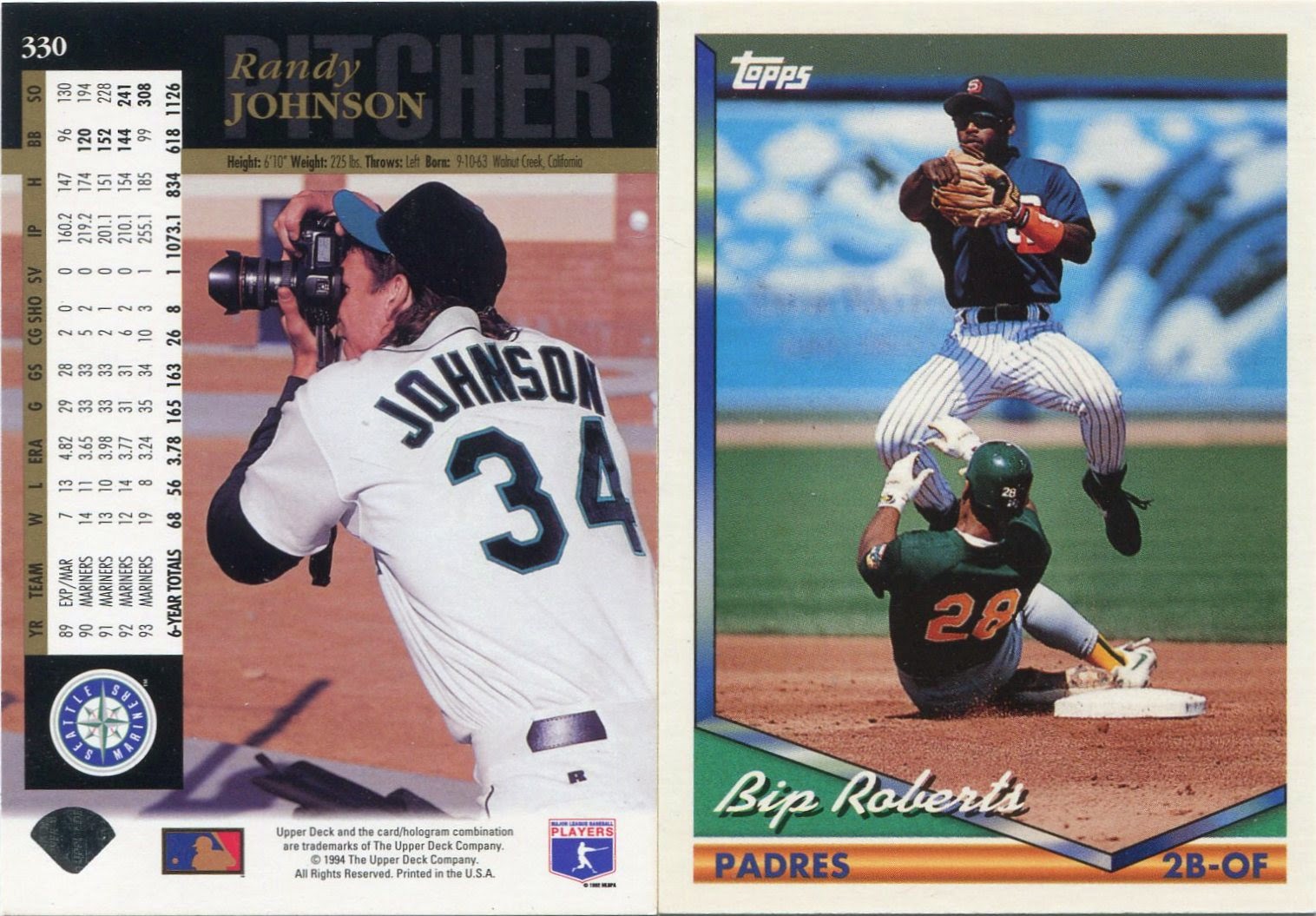 Between the "Big Unit" and Bip, mini-collections were abound in this package.

But what's with Randy Johnson wearing #34? 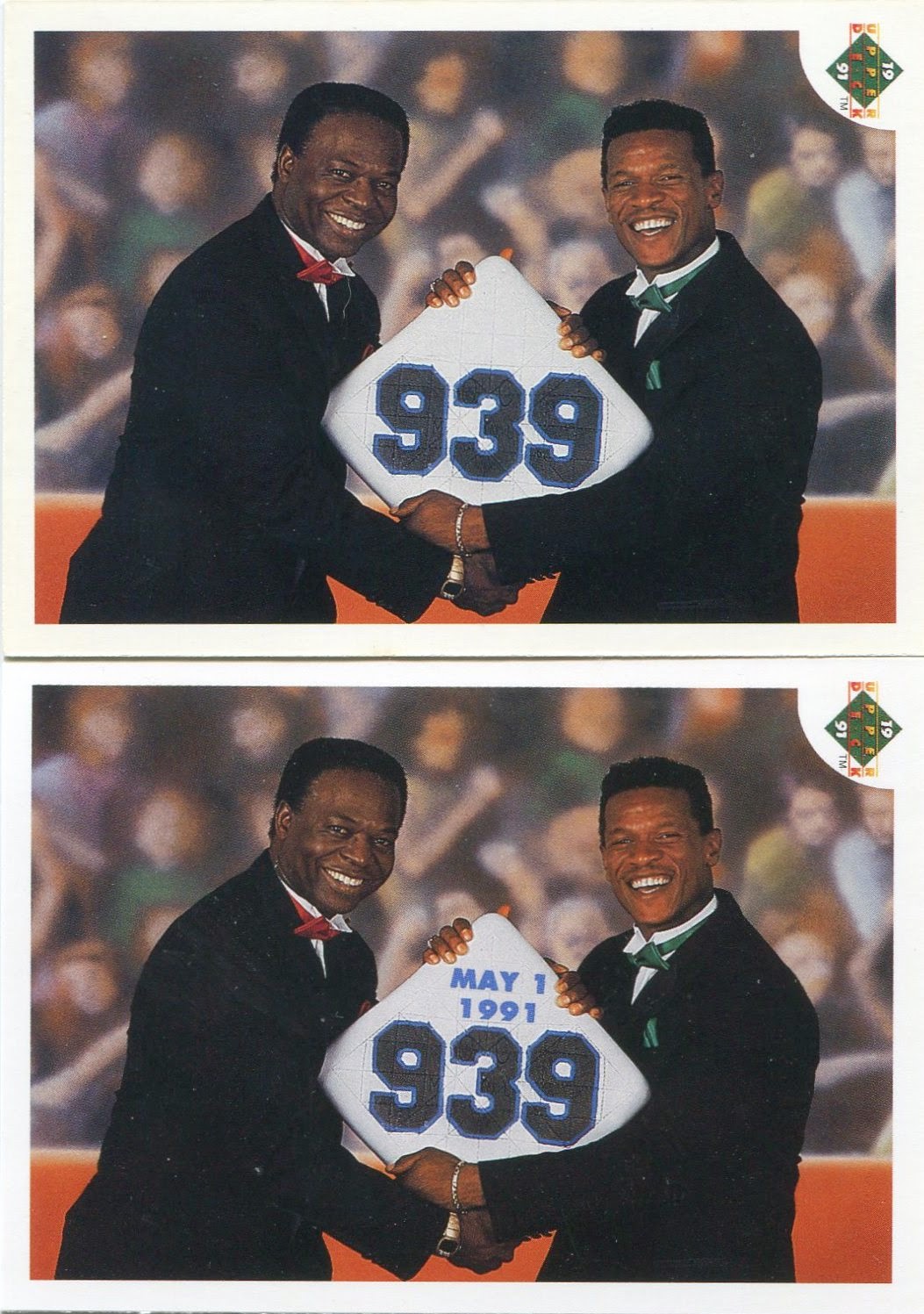 I never knew there were two versions of this famous card. 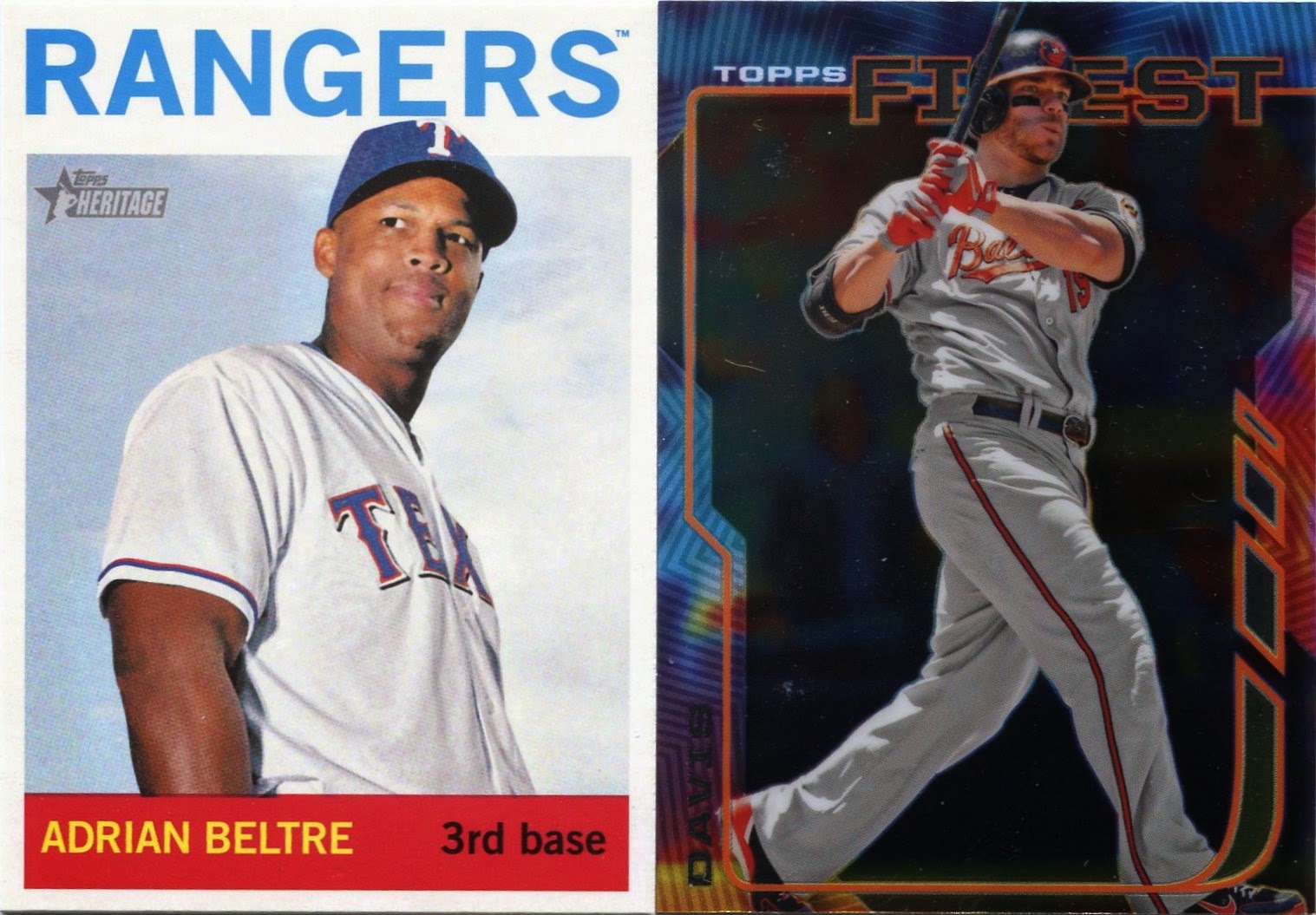 Julie helped out with a couple other recent needs with these two.

The Beltre is a short-print from 2013 Heritage. The more years that go by, the harder it is to find Heritage SPs.

I think the people still trying to build the 2007 set can back me up on that. 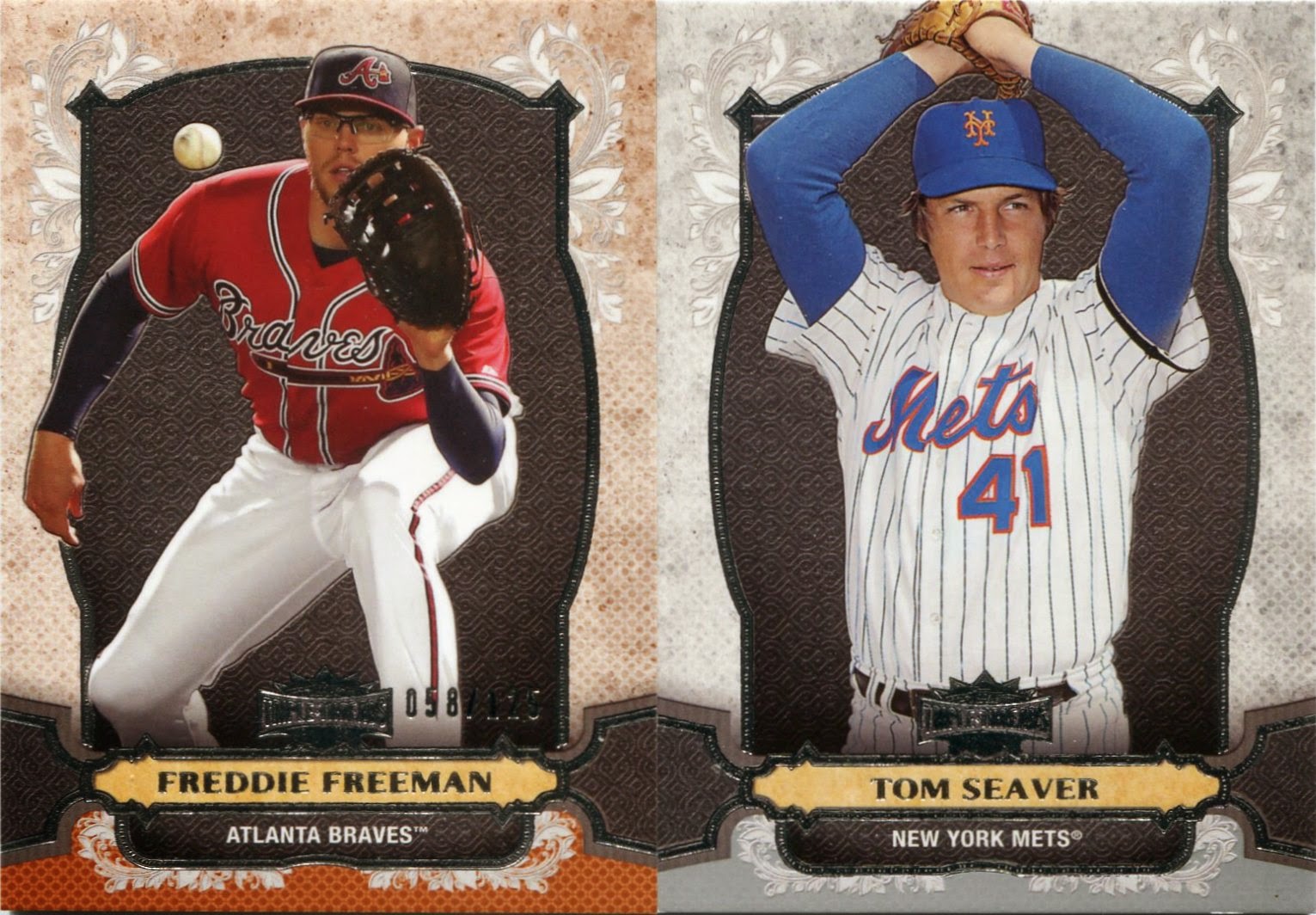 It's always a treat to get cards from high-end sets like Triple Threads, because I'm sure as heck not going to buy any.

The Freeman is some sort of colorful parallel, while the Seaver is your standard base card. It's not apparent in the scan, but these things are thick.

I had to get a hammer and a chisel to stuff them into my nine-pocket pages. 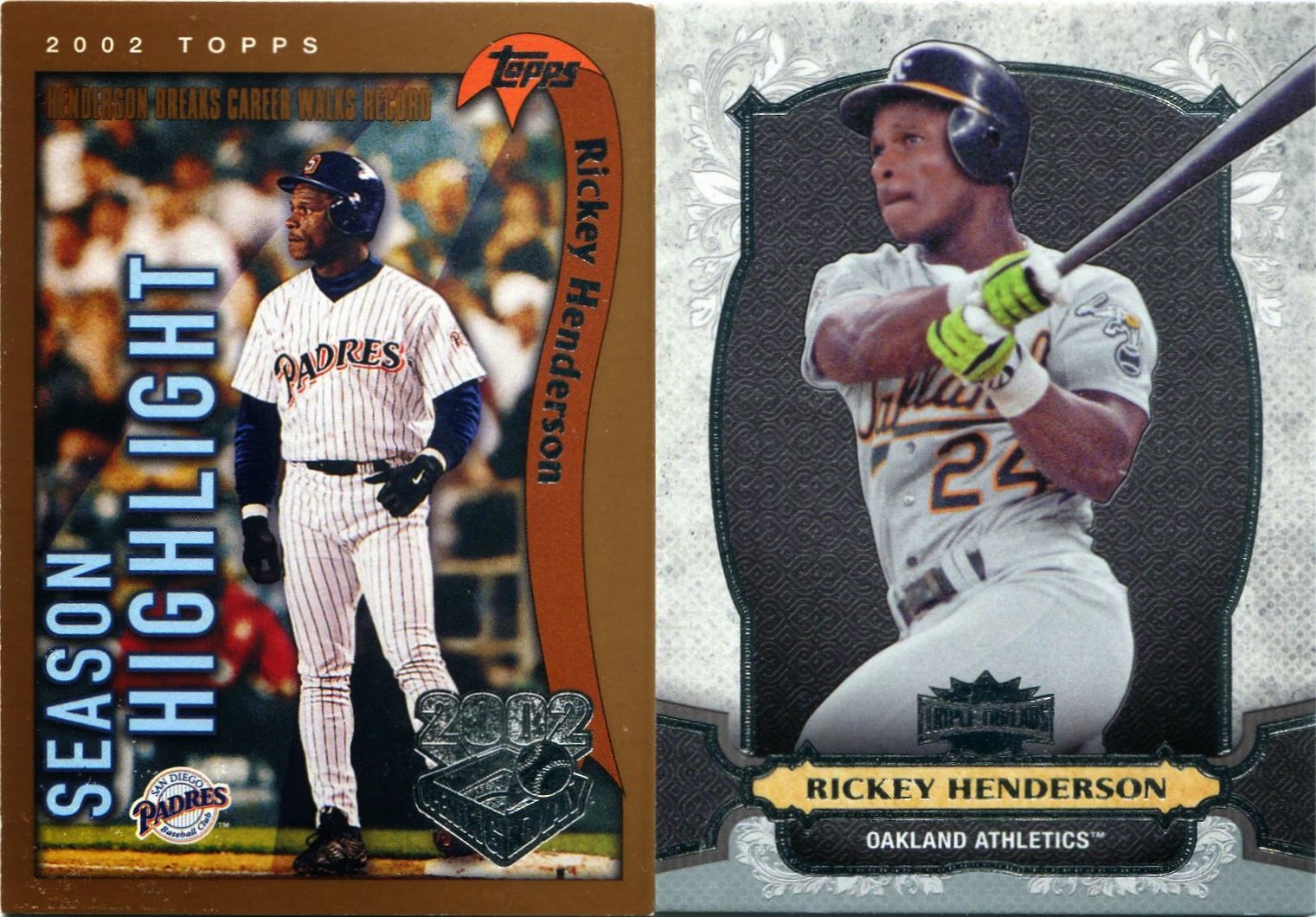 I can't recall ever seeing another highlights cards that commemorates walks. 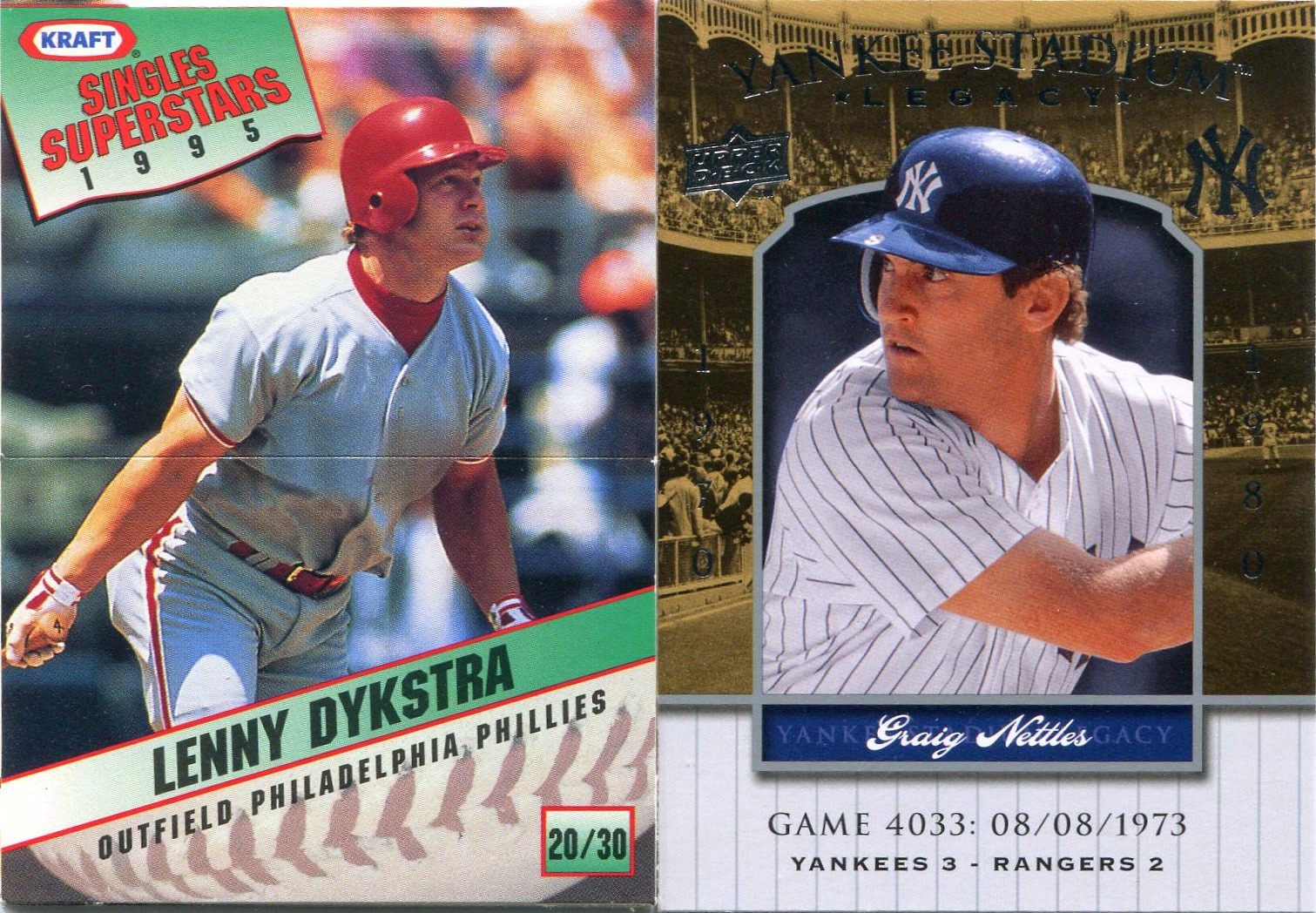 If the title of her blog is any clue, Julie is a huge fan of food-themed oddballs.

That Dykstra comes from the 1995 Kraft Singles checklist. They're supposed to fold out, but I haven't tried taking one apart yet. Maybe if I get an extra.

Also known as one of the most insane sets ever unleashed upon the general public. 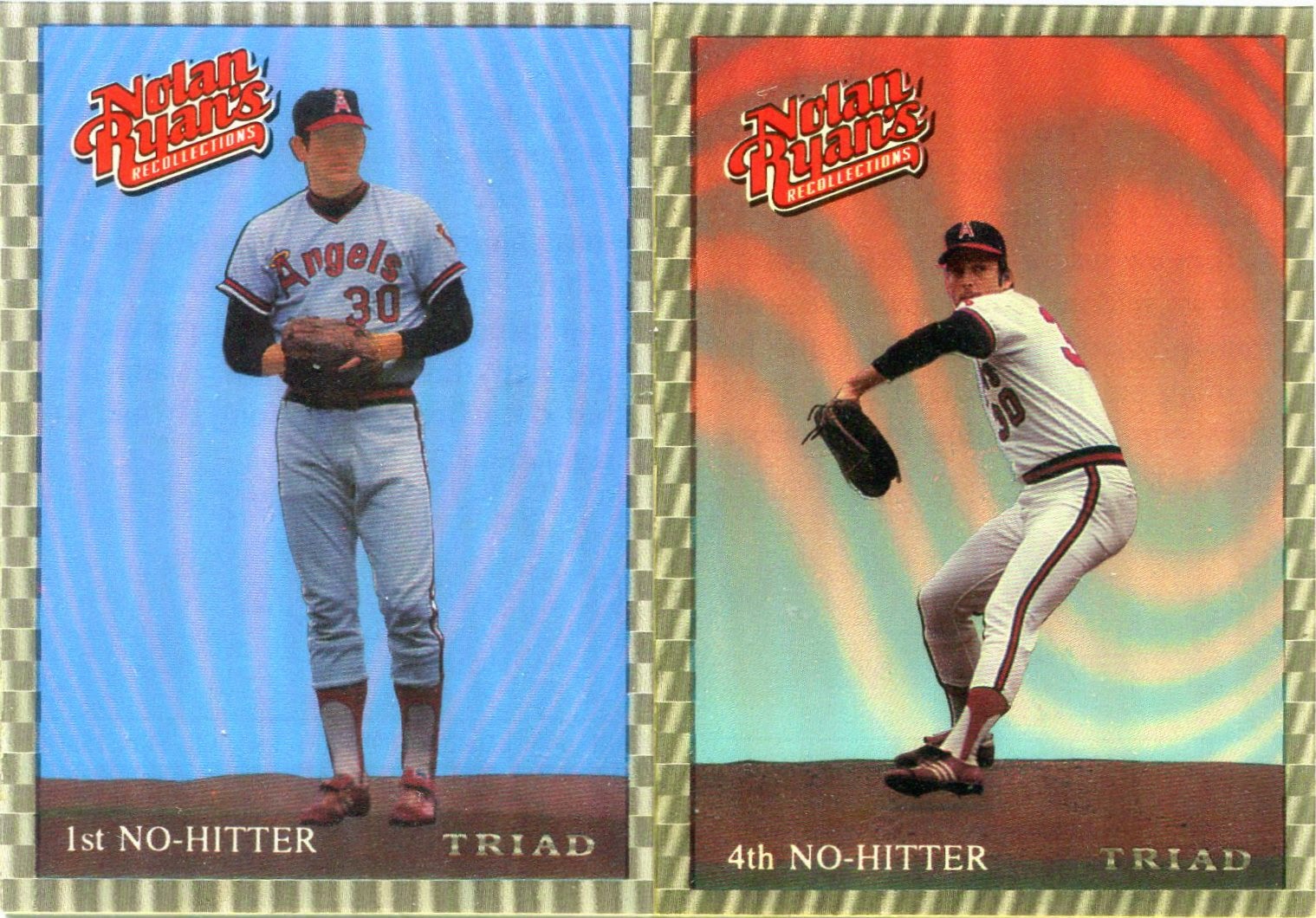 Holy cow, are these things awesome.

I'm not exactly sure on the specifics, but this pair comes from some kind of Nolan Ryan-exclusive oddball set. They look even more spectacular in person.

Whoever made these definitely channeled some of that 3-D Kellogg's spirit. 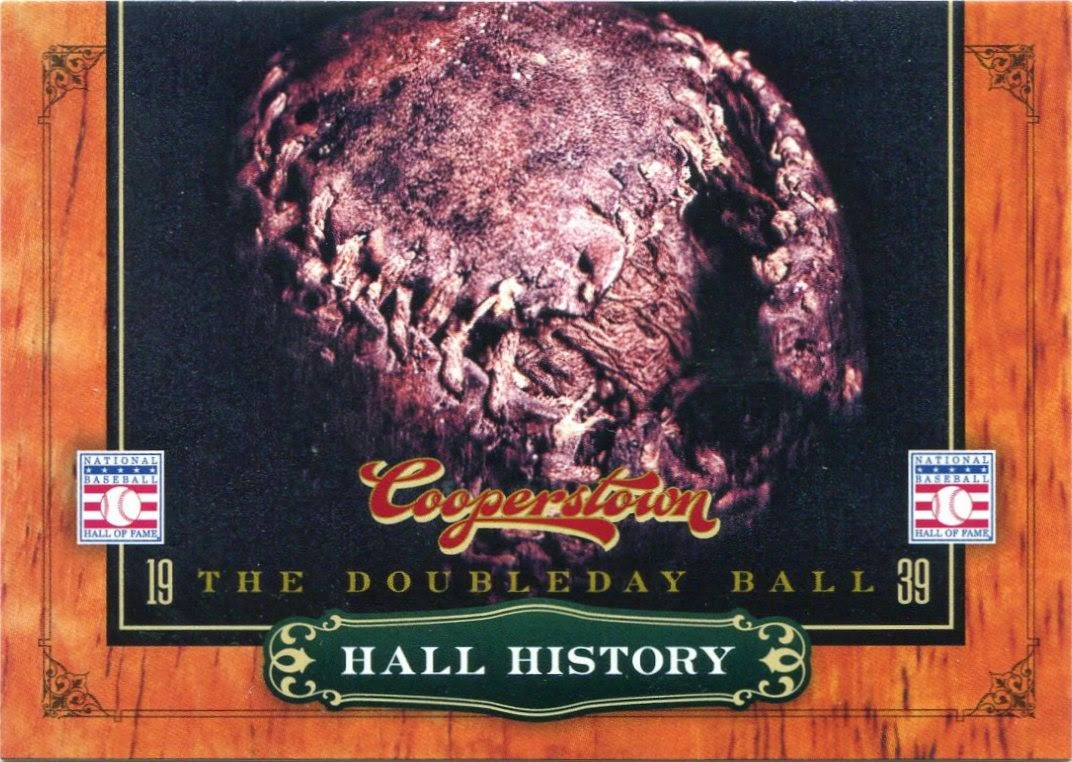 This is the type of history that makes baseball the best sport on Earth.

From what the fascinating bit of information on the back says, this old baseball was discovered in the attic of a house a few miles away from Cooperstown. It was thought to have belonged to Abner Graves, the man who claimed that Abner Doubleday invented the National Pastime. (A claim we now know is completely false.)

The then-nascent Hall of Fame purchased the ball for five dollars, and would go on to display it as part of Cooperstown's inaugural opening in 1939.

Hey, if anyone around here happens to be in touch with the Hall of Fame, tell them I'll give 'em six bucks for the ball.

If all else fails, I'll just put it on my Christmas list this year.
Posted by Nick at 3:17 PM

Those Nolan Ryan cards from Whataburger are rad! I have all ten of them, I think I got them from my father in law. I don't know how he came across them, seeing as how he lives in California, and Whataburger is a Texas fast food chain. A pretty good one at that, though it's no In-N-Out.

very cool selection ! That Olerud has been on my wantlist for 20 years, it's probably time for me to chase it down, now that the bubble has burst

Knowing you collected Olerud, I picked this up at a recent show for you. It's such a great-looking card, I almost kept it for my Grinchy self!