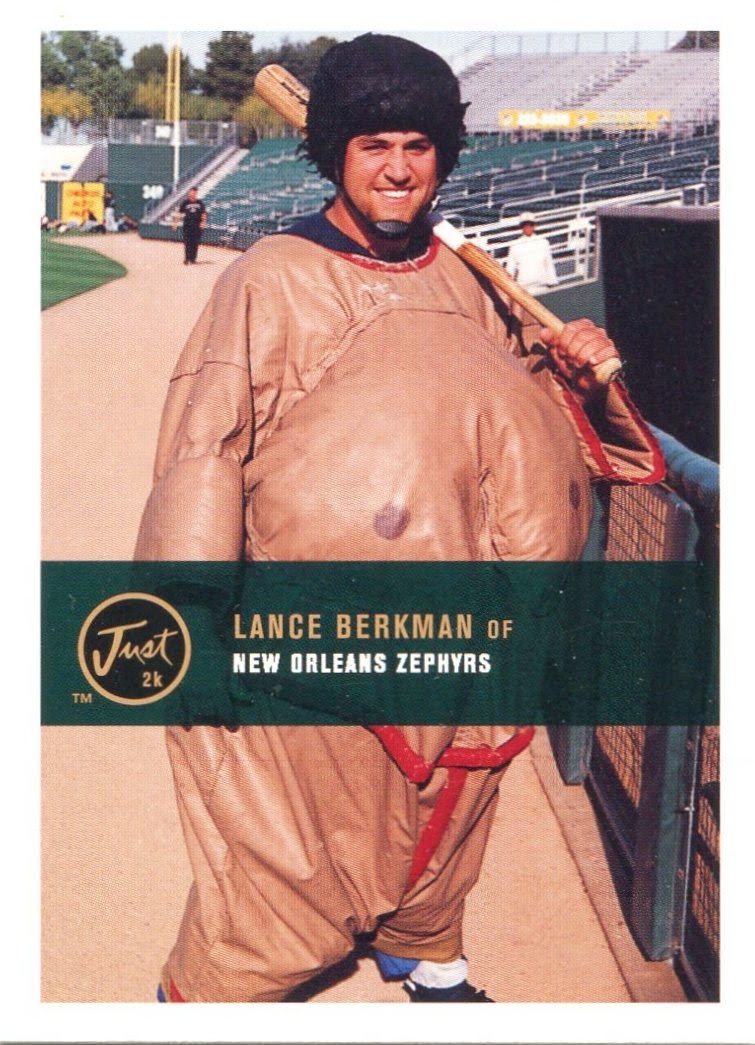 As card collector, I've trained myself to control my impulses.

Most of the time. Okay, maybe just some of the time. What the heck, I'll admit it. My impulses got a little out of control again a couple weeks ago. I broke down and bought a stack of 18-cent commons off of Sportlots.

For this impulse buy, I decided to start with the obvious. Dime Box Dozen. I knocked out a trio of DBD needs with my impulse purchases this time around. Simply buying cards from my list feels a lot like cheating, but, then again, I get the cards either way. Can't complain there.

In an interesting postscript, a fellow blogger actually sent me this very Dime Box Dozen need less than a week after my impulse buy arrived. Two copies of a card I've wanted for nearly a year.

When it rains, it pours. 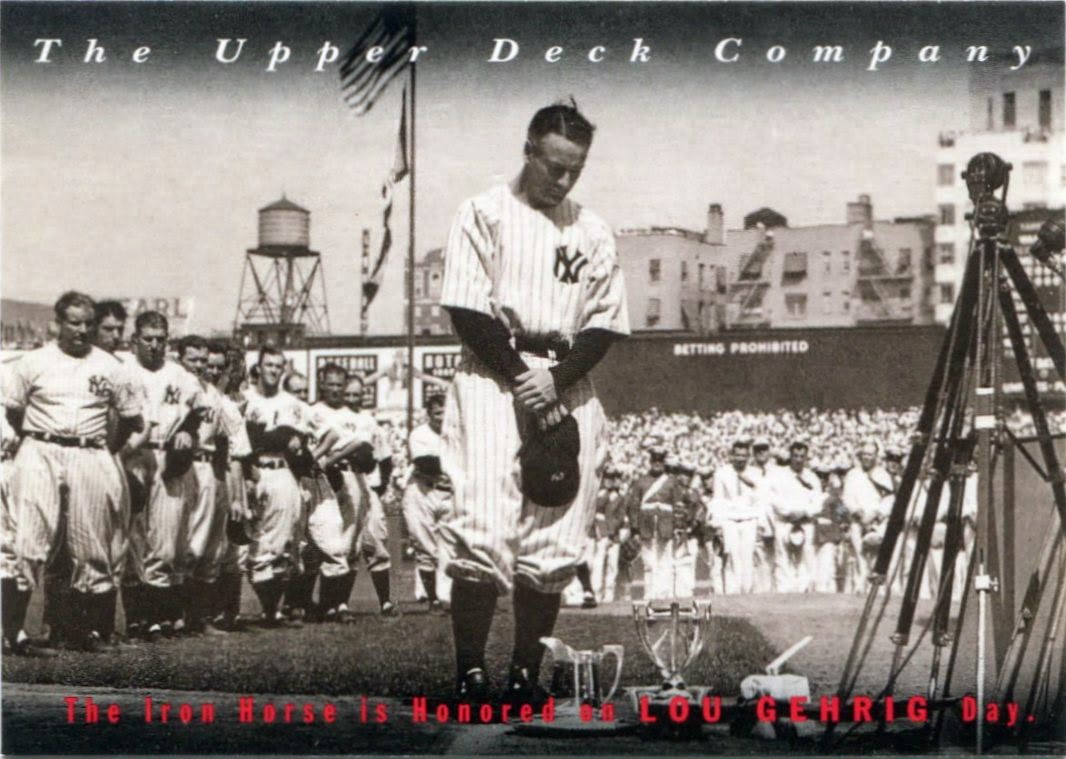 We go from the goofy to the historic with this next Dime Box Dozen need.

If you ask me, 1994 Upper Deck All-Time Heroes is one of the best legend sets ever produced. I have a few cards that commemorate Lou Gehrig's teary farewell, but none are quite as striking as this one.

It's the type of card that reminds me how powerful the game of baseball can be. 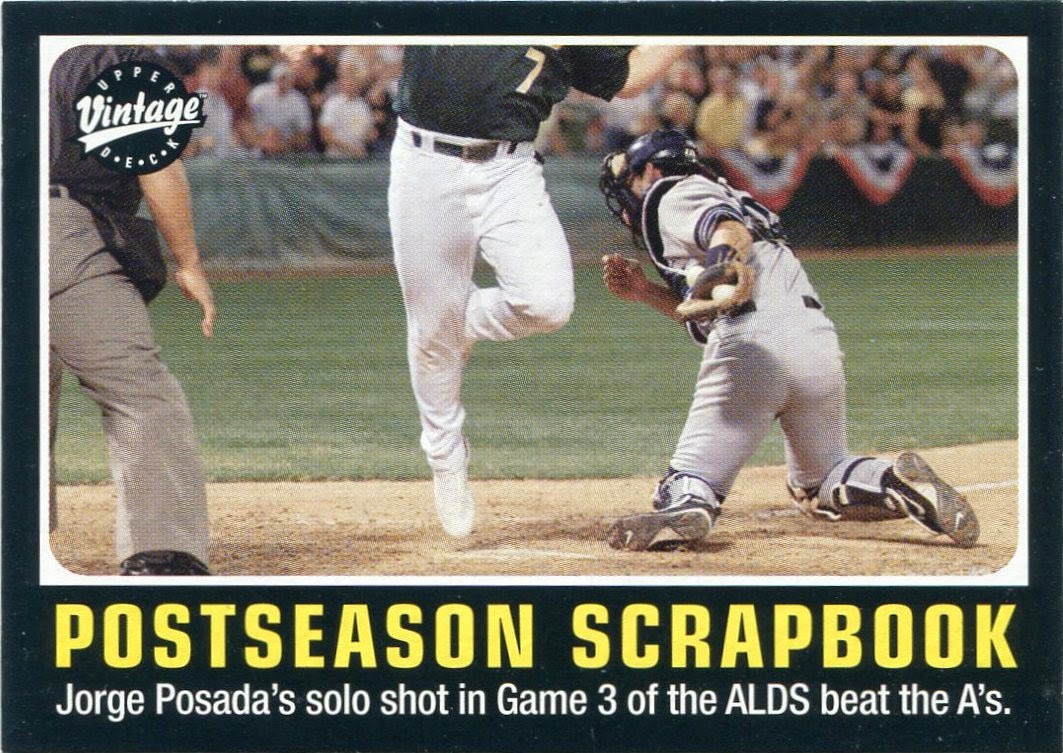 Hey, wait. This isn't the 2002 UD Vintage Jorge Posada I was expecting. This is one of the oddest and most ill-executed cards I've seen in a while. In a way, I kind of stumbled into a goldmine. Just a happy accident, I guess.

It features the tail end of Derek Jeter's famous flip (with Jeter out of the frame) by showcasing a shot of Jorge Posada (that actually puts Jeremy Giambi's crotch front-and-center) that is supposed to honor a home run the backstop hit in Game 3 of the 2001 ALDS (while showing him in the field). 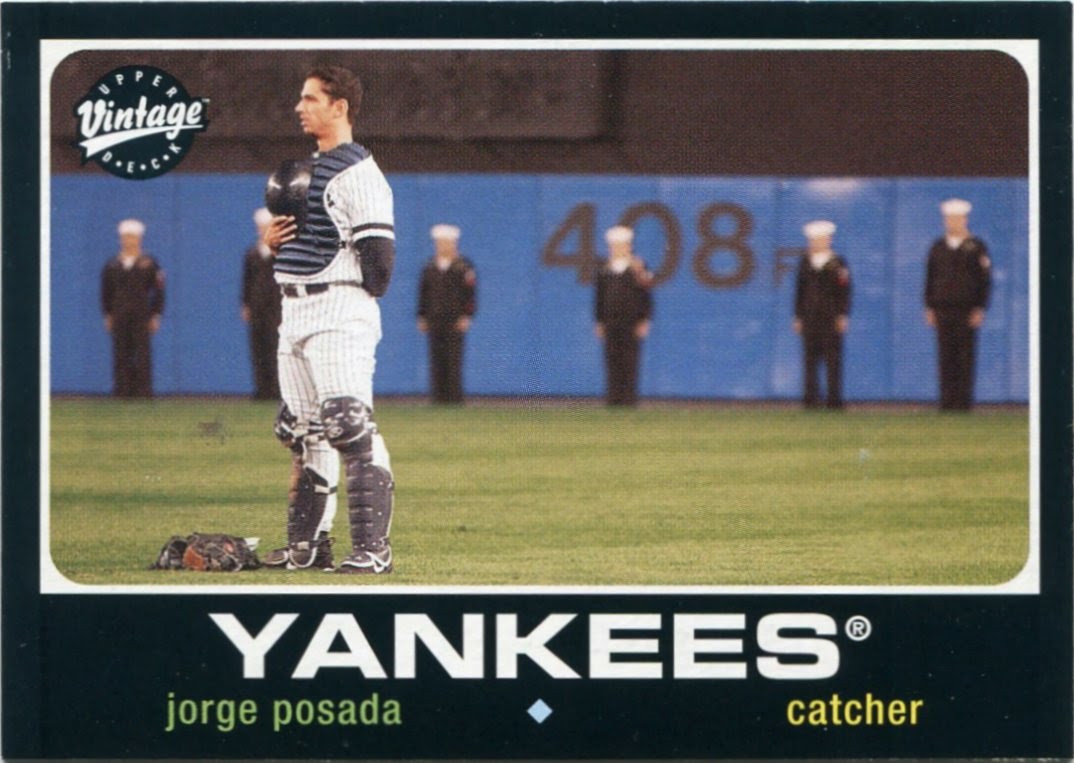 This is the card I wanted.

It was only after I received the first Posada that I realized I'd had the wrong one on my Dime Box Dozen list all along. While I'm happy to have both, this is the one that resonates with me the most.

It's easily my new best "anthemic" card. The sailors lining the outfield wall are what really make it so special. I'm not certain, but I'm guessing this shot was snapped at some point during the 2001 World Series, smack dab in the middle of a trying time for the nation. 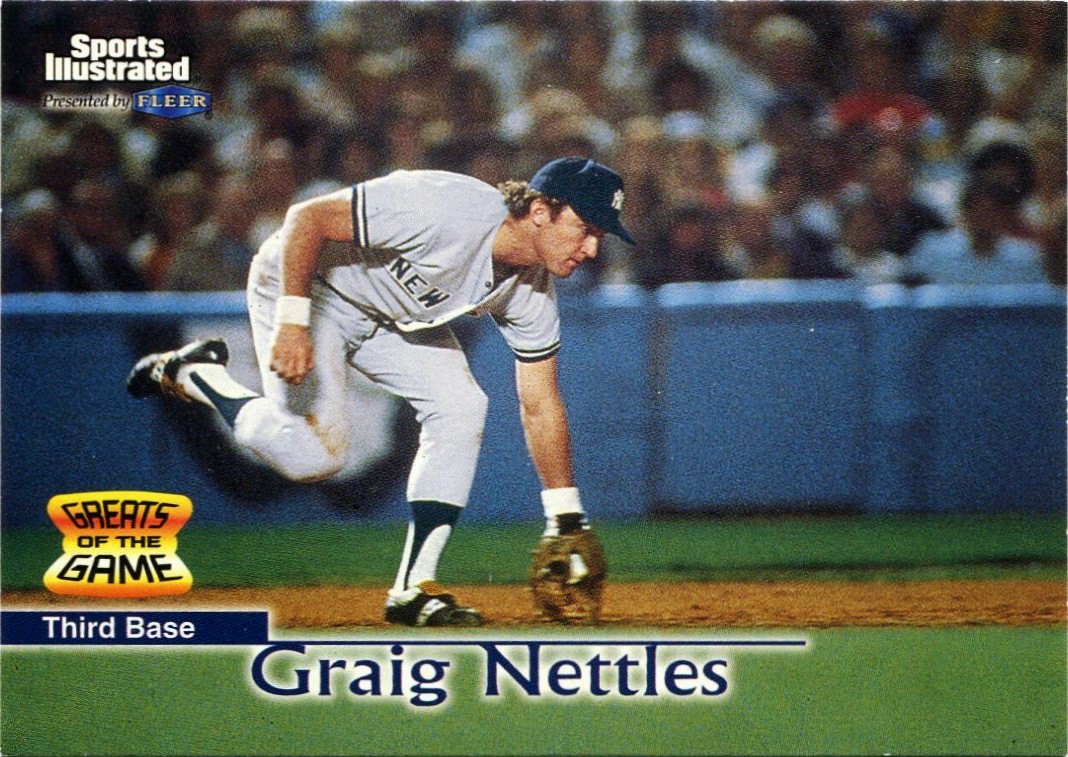 While that capped off the Dime Box Dozens, you had to know I wouldn't be able to stop there.

If you haven't bought off Sportlots before, it has its ups and downs. Unlike Just Commons, you're buying from separate sellers. That, of course, means higher shipping costs. However, if you can find a seller with reasonable mailing rates, you can put together a nice lot without making much of a dent in your wallet.

All of the cards in this post were spread amongst about three or four different sellers. One guy had this nifty Nettles from 1999 SI Greats of the Game, another of the most well-executed legends sets ever produced.

But the Nettles-mania didn't end there. 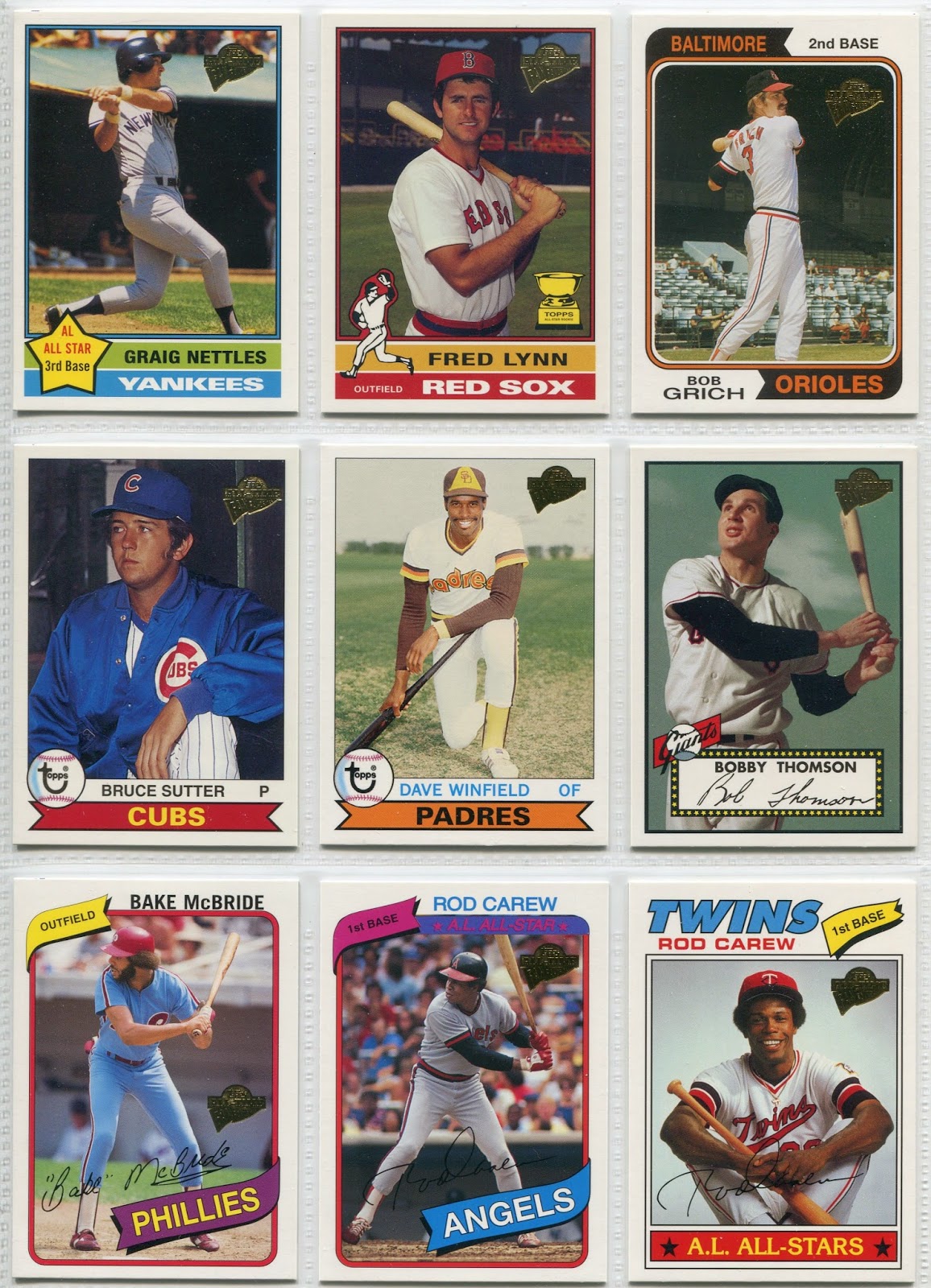 There he is again, this time with a bunch of his Fan Favorites buddies.

My love for this set has been well-documented in the past. I'm actually kind of happy that I still need so many of them.

It just means I get to discover more great cards of guys like Bruce Sutter and Bake McBride. 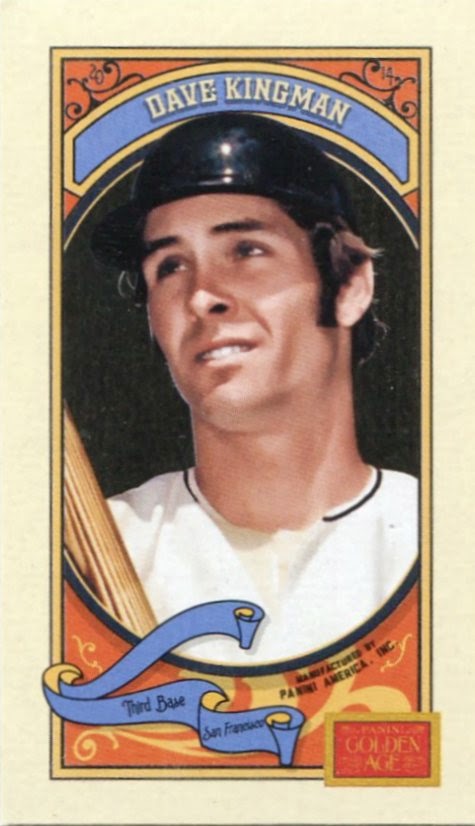 From what I've read, Dave Kingman was kind of an a-hole.

And yet I still get a huge kick out of collecting the guy. I can't tell you exactly why. I try not to make it a mission to collect jerks.

Still, whether it's from Golden Age... 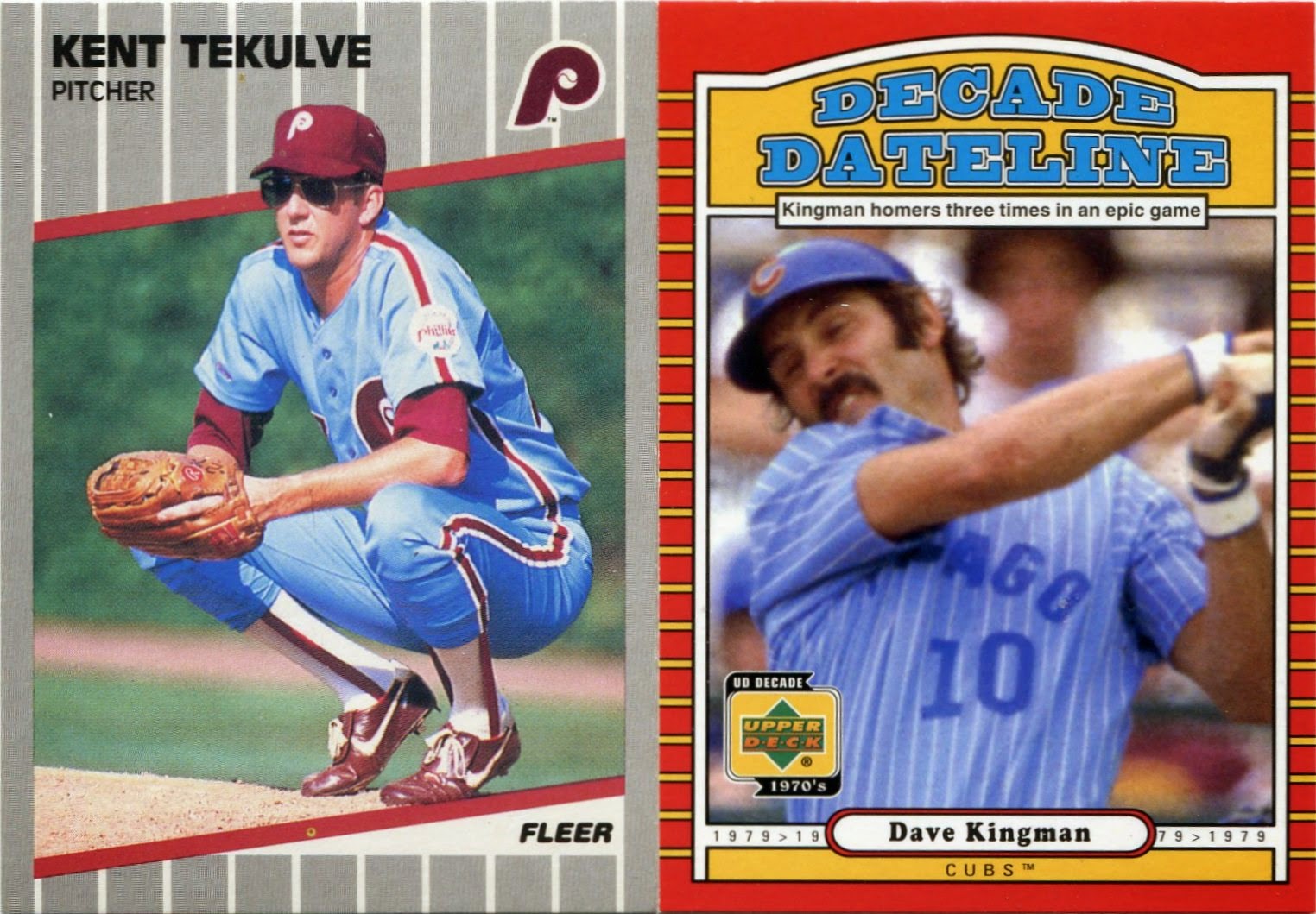 ...or UD Decade, I want everything I can find of Dave Kingman.

The fact that the card on the right commemorates perhaps the wildest game ever played is icing on the cake.

Oh, by the way, do me a favor. Please don't tell anyone I had to voluntarily buy something from 1989 Fleer.

I don't want that getting out. 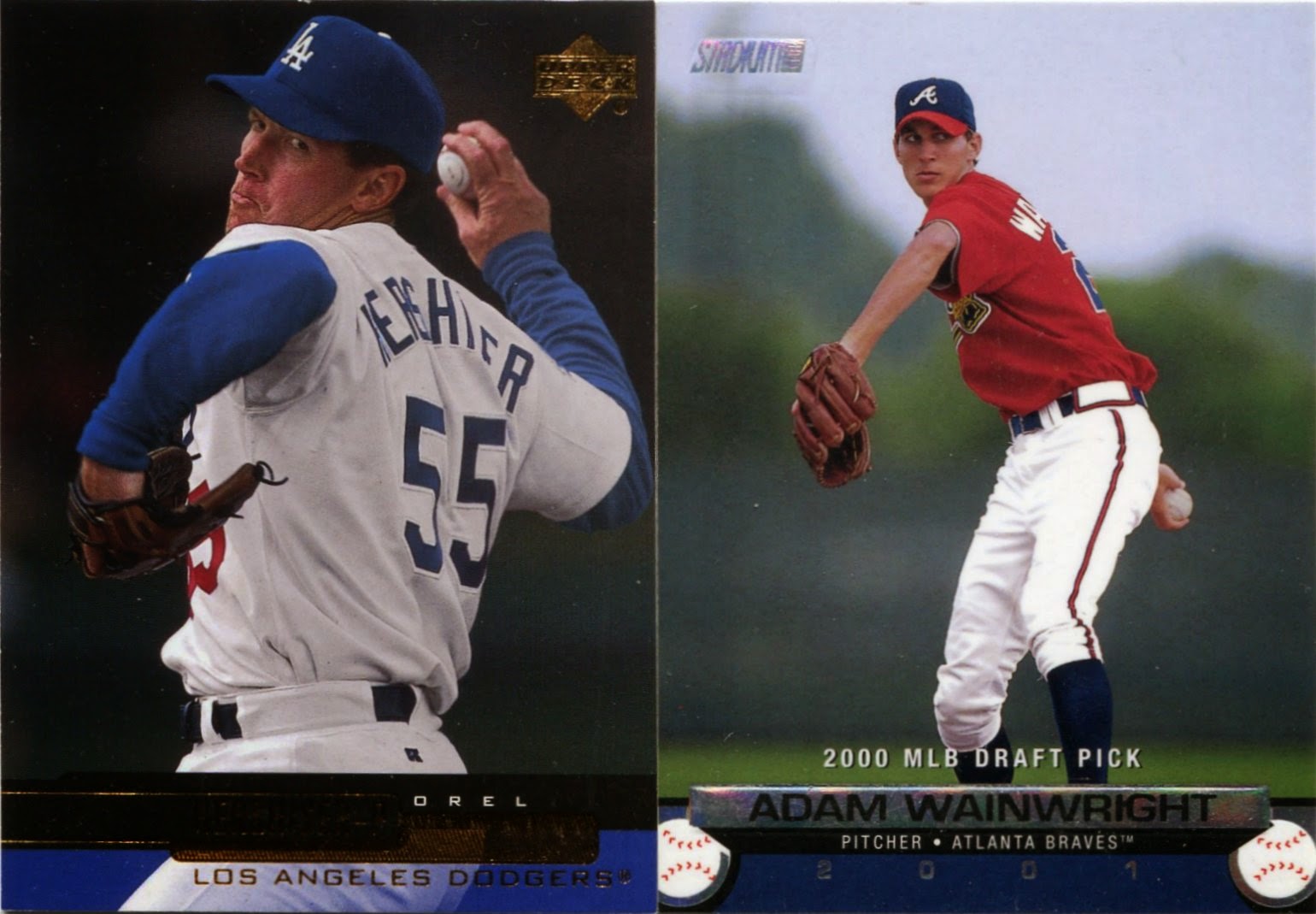 Here's a couple opposites for you.

Orel Hershiser was on his last legs by the time 2000 came around. No one seems to remember his second stint in the Dodger blue. Guess that 13.14 ERA has something to do with it.

Some kid named Adam Wainwright was starting to pop up in sets like Stadium Club in 2001. Little did he know he'd never pitch a game in Atlanta. Getting a glimpse of that card would set my blood boiling if I were a Braves fan.

But I'm not, so all I see is a brand new zero-year card for the collection. 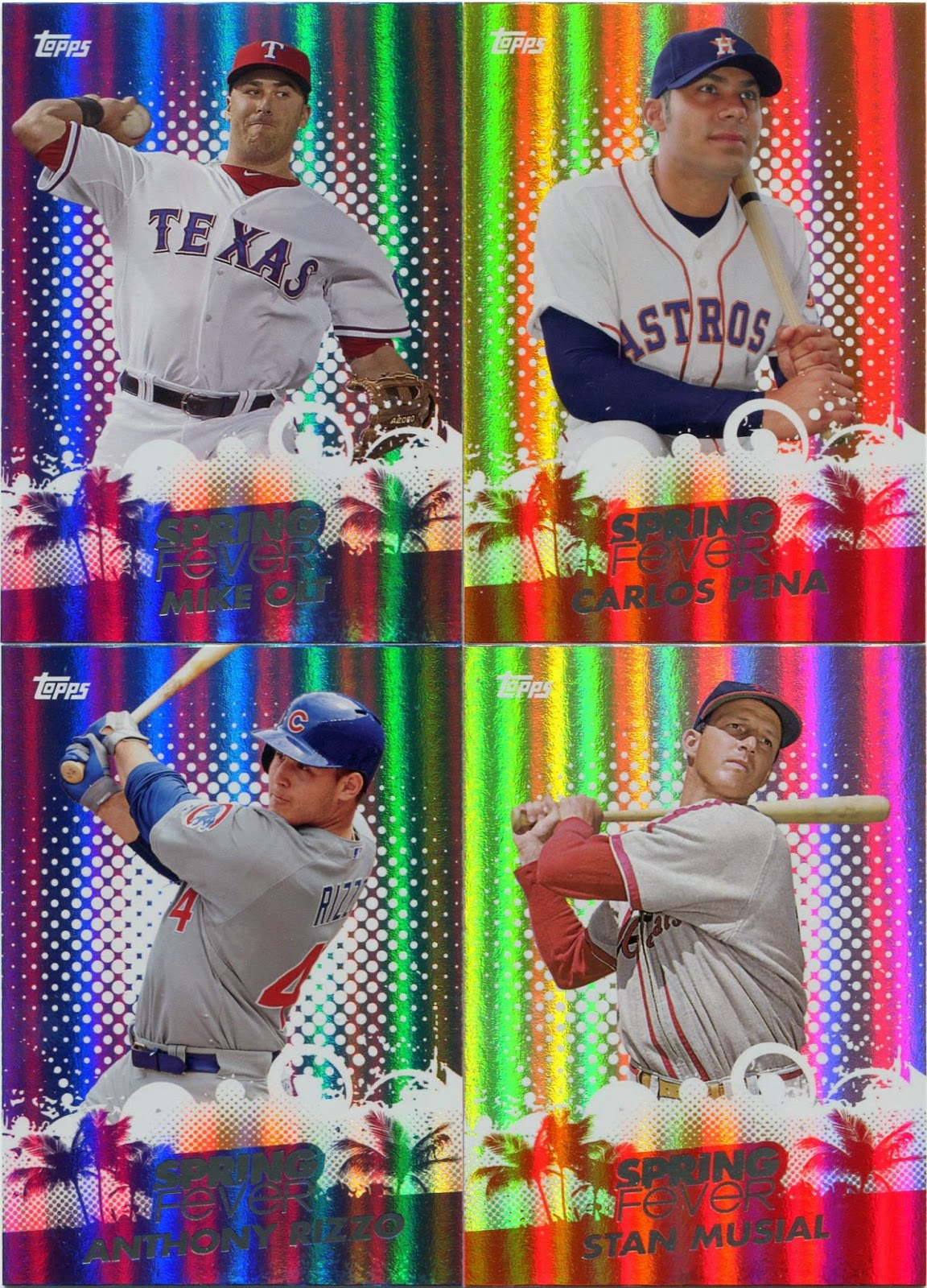 I'm about ready to catch some Spring Fever.

I may be in the minority here, but I really like the looks of these inserts. Shiny, flashy, no-holds-barred, right up my alley.

Trouble is, I can't seem to locate any around these parts. I'm not even sure how people find them in the first place. Something involving hobby shops, I think.

That doesn't help me any. 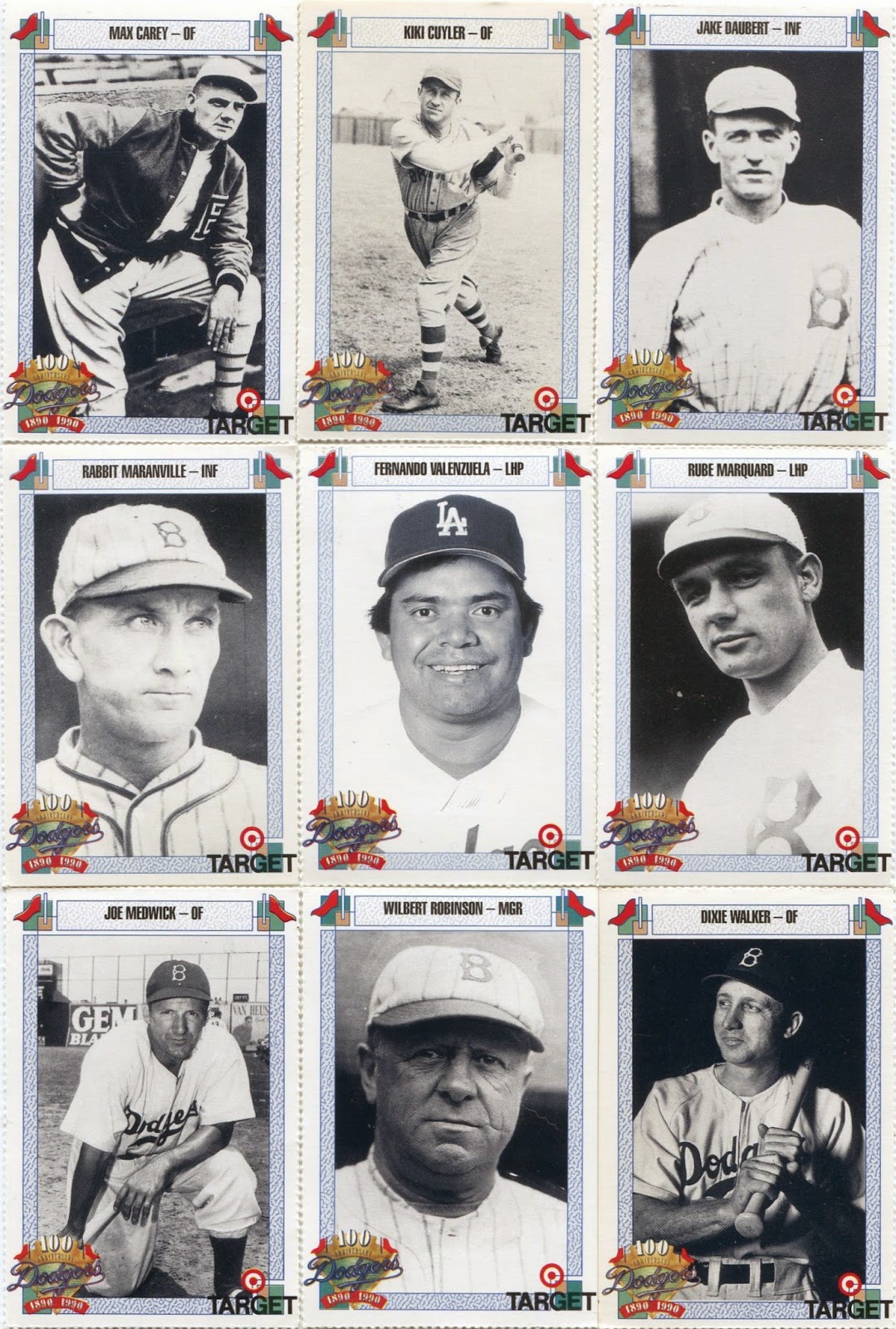 I finally own some Target Dodgers!

I've been wanting to say that for a long time now. Like a lot of you, I've been getting my Sunday morning fix of Target Dodgers over at GCRL's blog for the past many weekends. Those posts inspired me to go hunt down a few for myself.

Before this, I'd never held or even seen one of these puppies in person before. They were given away in entire sheets as giveaways at various Dodger games in 1990. These cards are very thin and, as you can tell, are well smaller than your standard baseball card. Think of them as oversized stamps.

I stumbled upon a seller with a wide inventory of these Target Dodgers for just a quarter a piece. The best part about the set is how expansive it is. Except for Fernando (and perhaps Wilbert Robinson, if you want to go way back), none of the players you see above are exactly well-known as Dodgers.

In fact, these are my very first cards of Kiki Cuyler, Rabbit Maranville, Rube Marquard... 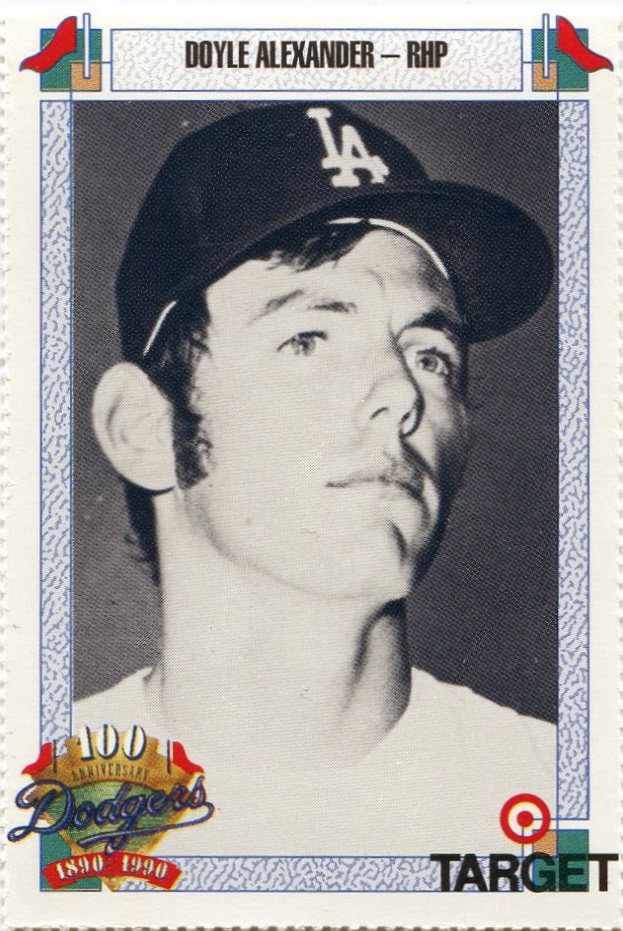 ...and Doyle Alexander in the Dodger blue.

They're all fantastic cards, but the Alexander was easily my favorite of the bunch. In a post a while back, I mentioned how finding a card of Doyle with the Dodgers was kind of a "white whale" of mine even though I thought none were ever printed.

My buddy Ethan hipped me to the existence of this one, and now, many months later, I finally own it. I finally have a card that honors Alexander's 17-game Dodger career.

Now that's getting the most out of my impulses.
Posted by Nick at 6:50 PM

Love the Fan Favorites!!.. That IS a great set!

I believe the Spring Fever cards were in special packs you got at card shops if you spent a certain amount on certain products (Series 1 I think).
I actually met Kingman a while back when he was doing a (free) autograph signing at a local card show. He seemed pretty nice but then again I only interacted with him for like a minute.

Thanks to you, Nick, I've been hunting for the 2001 Posada card, as well. That card is basically perfect!

I love that 'anthemic' Posada! Cool Target Dodgers too.

Zephyr Field has a lot of goofy promo events like that. And now that I've seen it I must track one down. I've sat in those seats in the background many times...