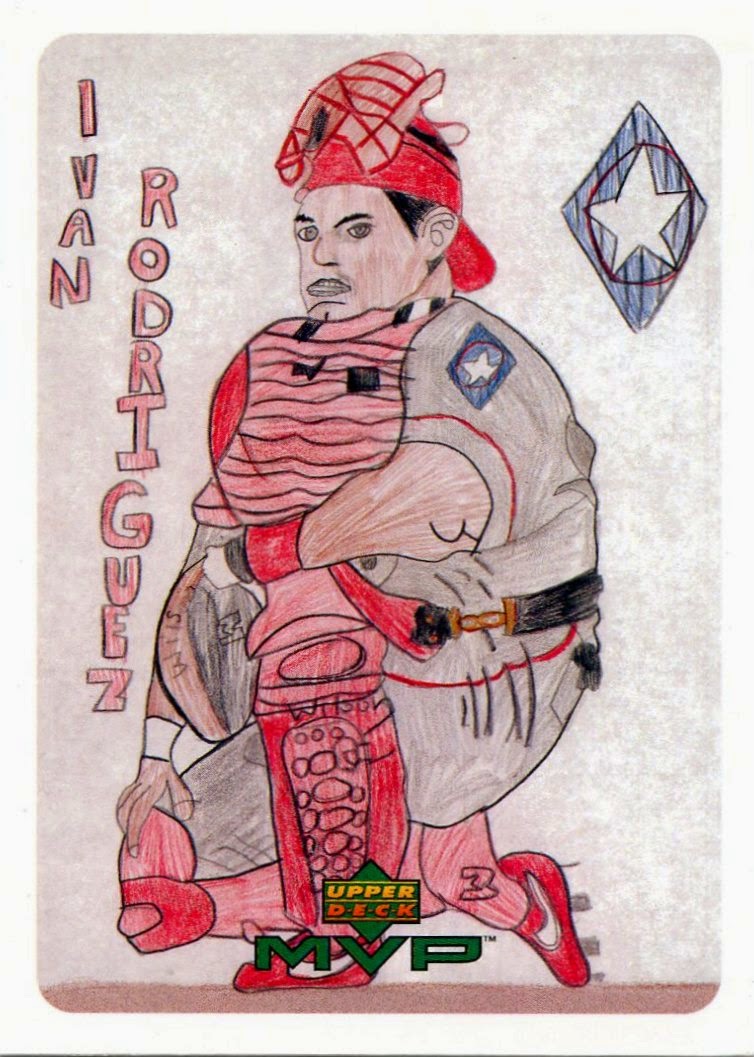 Card collecting is an addiction.

If you want proof of that, track down any collector who travels a fair amount. Ask him or her what their first mission usually is when they land in a new city.

I'd wager that a lot of them will say Look for a card shop.

I don't know why, but I got to thinking about this whole traveling thing the other day. My family and I have never been much for constant traveling, but I know I've gotten the card shop bug whenever we've taken vacations in the past. I can't help but wonder how many of my cards were purchased by either me or a family member outside my home state of Illinois.

Now, there's a good chance that a lot of my vintage and others have done some traveling. Maybe a few of them have been to Asia and back. But I don't know for sure. I'll never know for sure.

I took some of my finds from a card show on a trip to Vegas a couple years ago for no good reason. This cartoon Pudge Rodriguez was one of the lucky ones. He got to stay at Circus Circus for three days, free of charge.

That said, I bought him (and all the others from that show) right here in Illinois, so it's still technically a piece of homegrown cardboard. 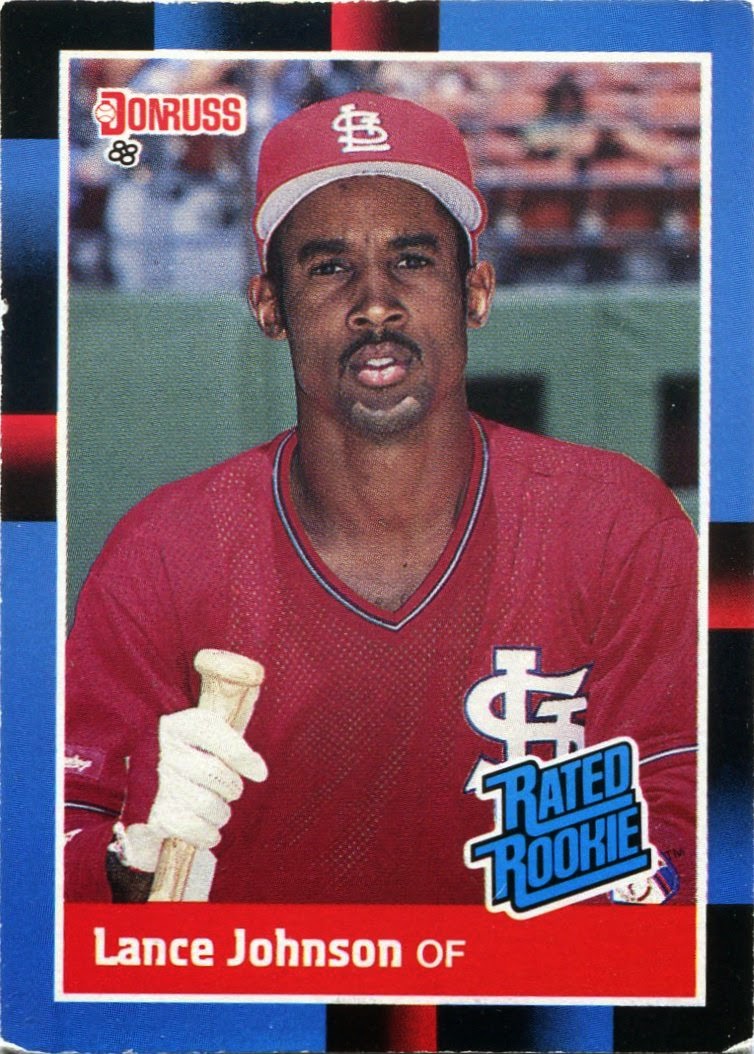 I've actually been to Vegas three times, and not one of the trips resulted in new cards.

I hazily recall going to a shop the second time I was there, but either they didn't have much baseball or everything was overpriced. Probably a bit of both.

You'd think the city of lights would have more to offer in the way of cards. Certainly more than somewhere like Wisconsin Dells, at least. In reality, though, the opposite proved to be true.

My family and I took a trip to the Dells about ten years ago. I'm not much for swimming and I was far too young to hit any of the casinos back then, so I had a lot of free time on my hands. My dad and I tracked down a huge card shop while we were up there. I just wish I could remember more about it.

I'm about 95 percent sure I bought this Lance Johnson rookie (one of the extreme few cards to feature him as a Cardinal) at that shop. 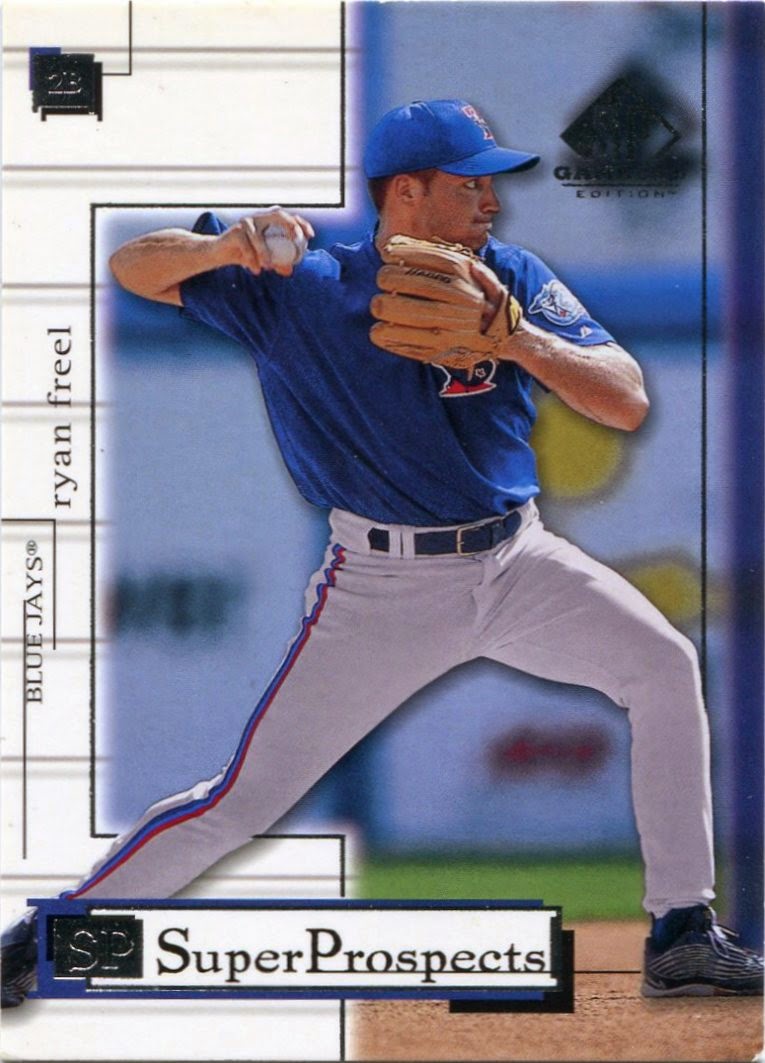 I'm 100 percent sure this Ryan Freel rookie came from the Dells.

I can recall walking out of that shop with a decent-sized stack of singles, but I sadly don't remember a whole lot of the specific cards I bought. For whatever reason, this one of the late Freel has stuck in my memory.

Like the Lance Johnson, I bought it because I was (and still am) big into unfamiliar uniforms at the time. Freel played exactly nine games with Toronto in 2001, and this was my first card of him as a Blue Jay. (I now have eleven.)

It's also numbered to 500 copies, which satisfied my younger, serial-number-crazed self. I don't remember exactly what I paid for it. Probably a quarter. Maybe fifty cents.

Whatever the price was, it was worth it for the memory alone. 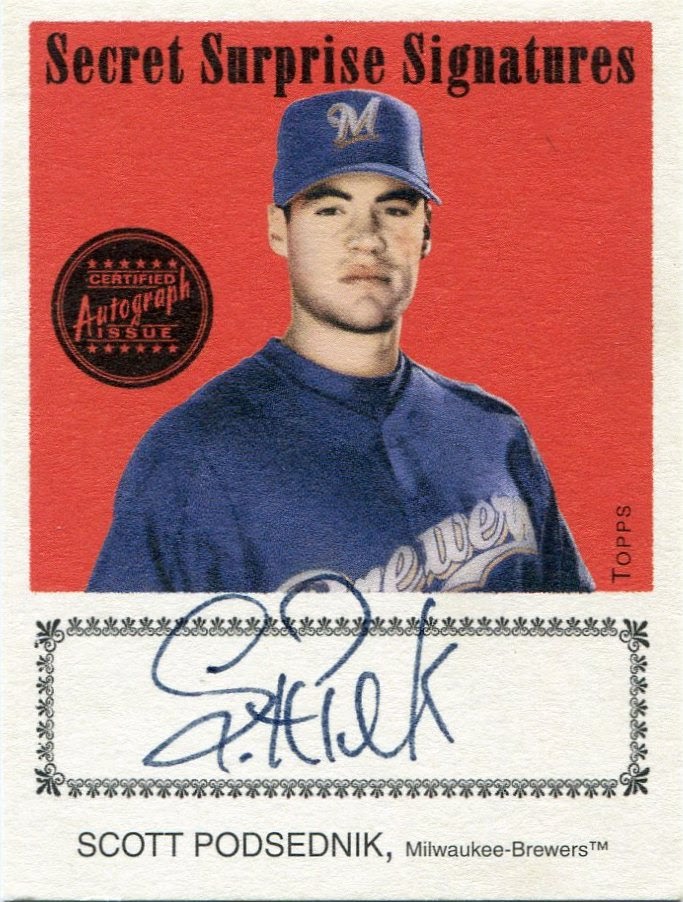 Personally speaking, this is one of the most iconic cards in my collection.

Whenever I see it, my mind instantly shoots back to a family trip to St. Louis from when I was about twelve. The big event of the vacation was a Cubs-Cardinals game at the old Busch Stadium.

But, before that, we stopped at a mall somewhere in the city. I somehow walked away with a few packs of 2004 Topps Cracker Jack from one of the stores (I don't remember which), a set that was a personal favorite at the time.

Lo and behold, this Scotty Pods autograph fell out of one of them. I can still feel elation and sheer joy from when I first laid eyes on it. Podsednik was (and still is) one of my favorite players, and pulling anything like this of a favorite player is darn near impossible.

The stars aligned in St. Louis that afternoon. 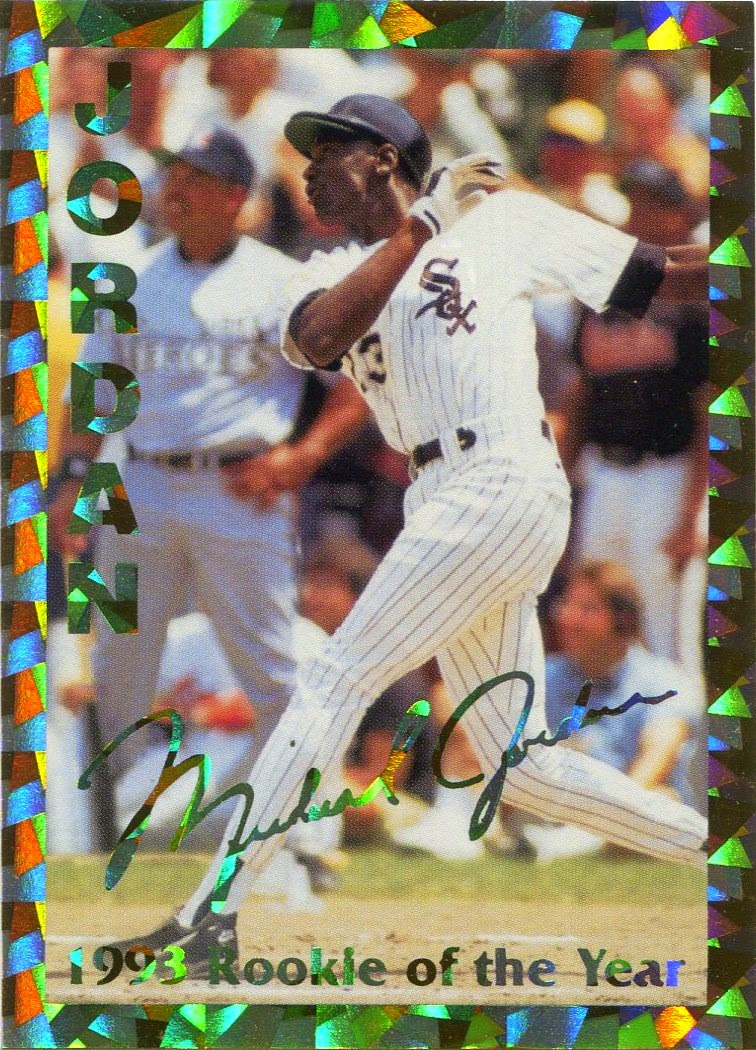 I received this beautiful Michael Jordan oddball as a birthday present from my grandma last year.

She mailed it to me from where she lives out in Arizona. The note she included said she found it at some kind of trade show around her town.

Most of my family knows I collect, and my grandma is admittedly one of those people who still thinks my 1988 Donruss Mark Grace rookies will put me through college.

But, even though I can't tell you exactly what it is, she definitely did good with this Air Jordan oddity. 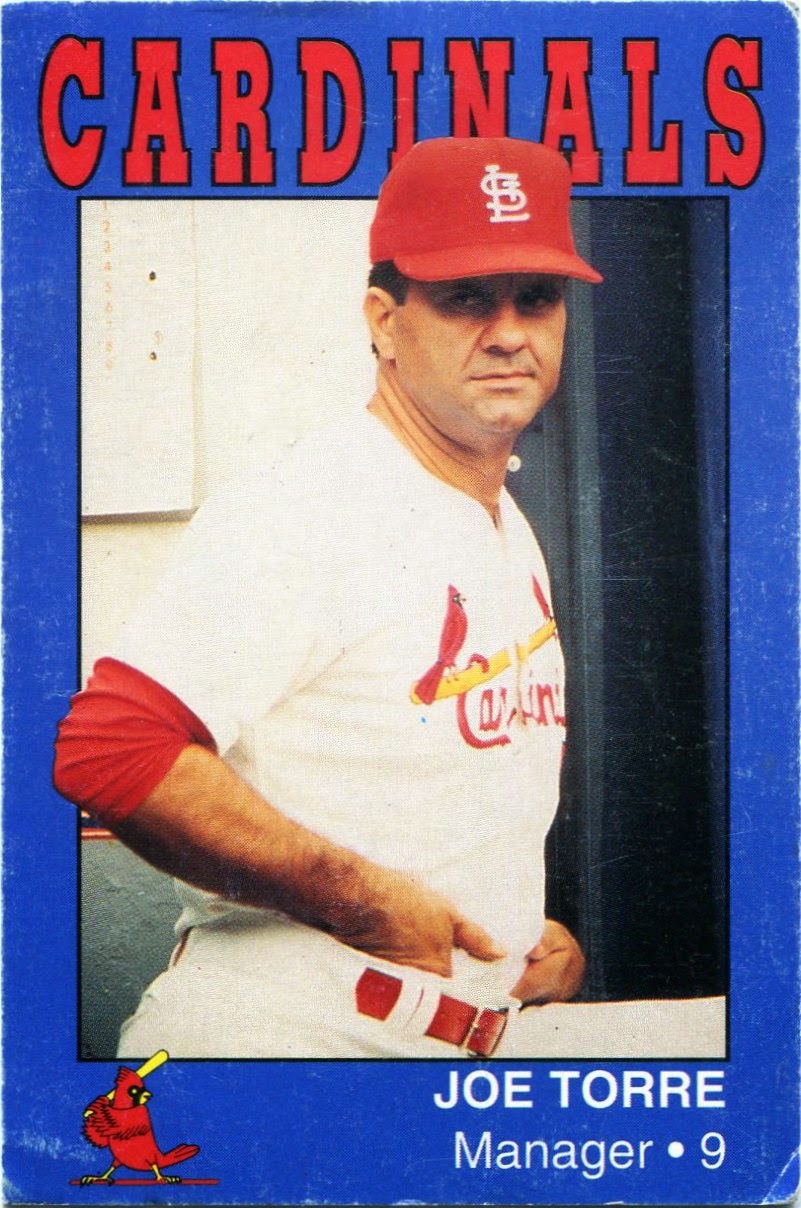 Then there was the time my dad found some regionally-issued Cardinals oddballs in a thrift store in England.

I've given up trying to explain that one. 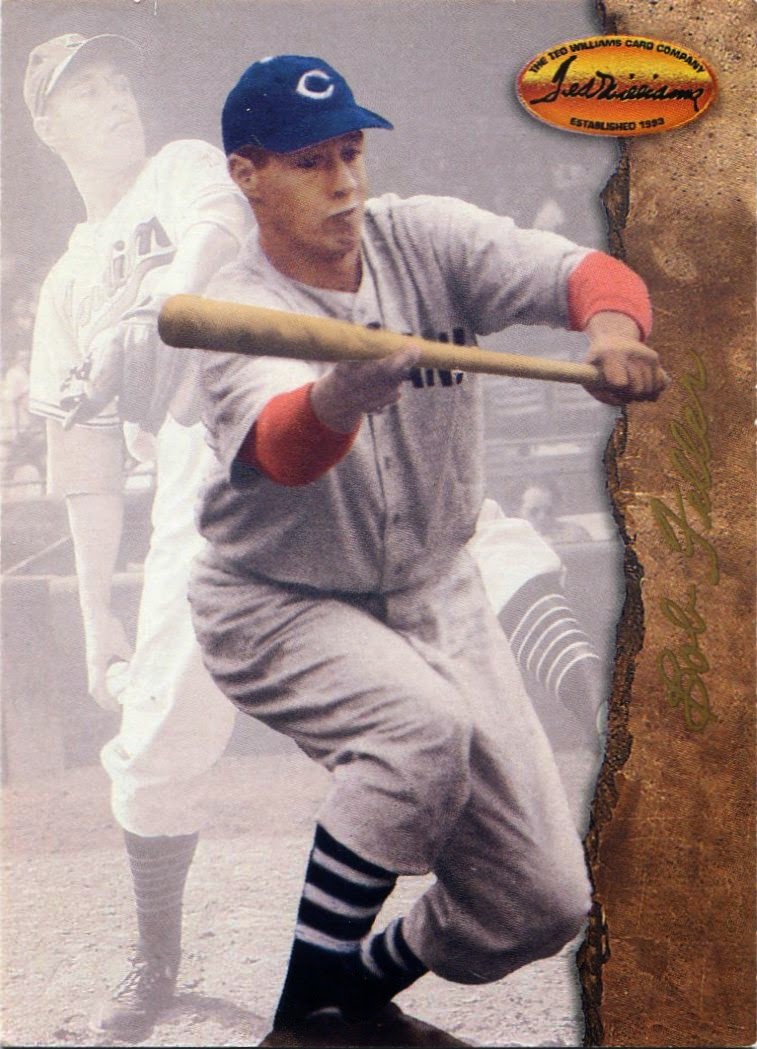 However, the only city outside of Chicago (and the surrounding area) that can lay a sizable claim to my collection is none other than Memphis, Tennessee.

I briefly mentioned it in a post last week, but there's a mega-card shop down there. I've only been to Memphis once (and had a ball), but my dad used to make trips down there annually. He still goes every couple years or so now.

The shop mostly has older unopened packs, and the selection is second to none. Every time my dad would go to Memphis, he'd come back with a bag full of cards for me. (He still does, as a matter of fact.)

I have very fond memories of sitting in our living room and busting open all that wax my dad would bring home. The crown jewels were always the 1994 Ted Williams packs he'd find. In terms of personal ties, this is one of the sets that stands out in my memory the most.

In fact, there's a decent chance that this Bob Feller from the Ted Williams Co. might have triggered my current obsession with pitchers at the plate. 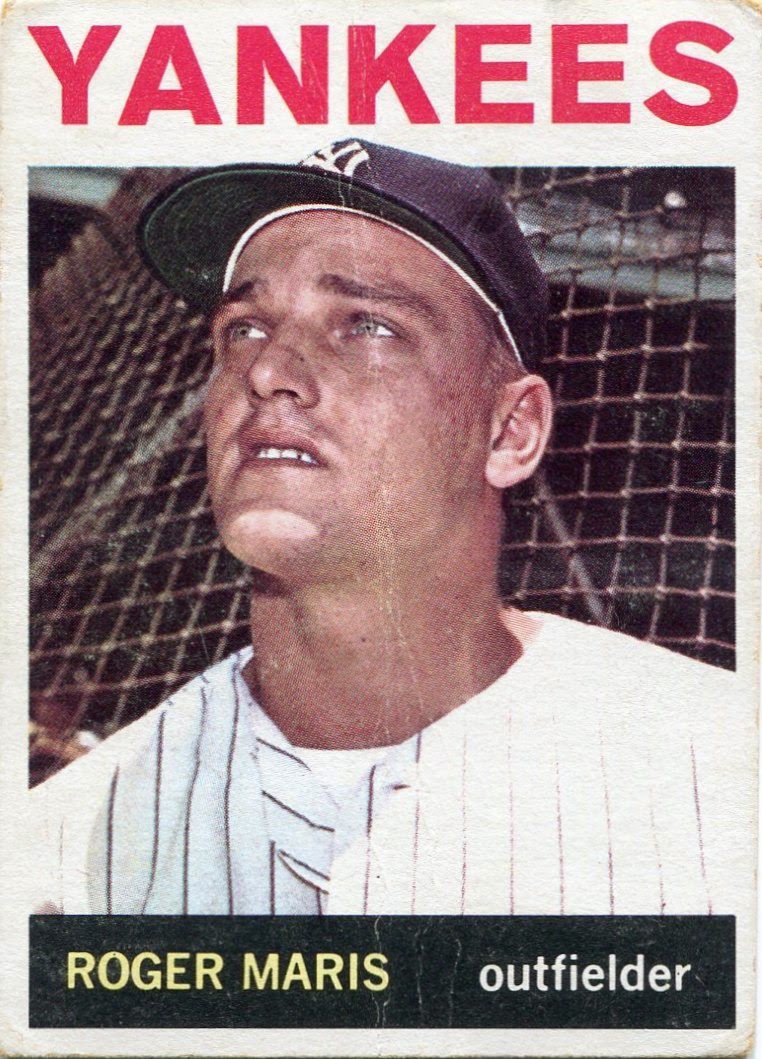 Then, out of nowhere, my dad came home from Memphis one year with this in tow.

From what I recall, the card shop had a small glass case near the front with mostly higher-priced vintage. I don't think I bought any of those the one time I was there. But, evidently, my dad did a bit of glass case hunting during one of his own trips a few years later.

For a while, this '64 Roger Maris was the best non-Chicago-bought card in my collection.

I didn't think anything in all of Tennessee could beat it. 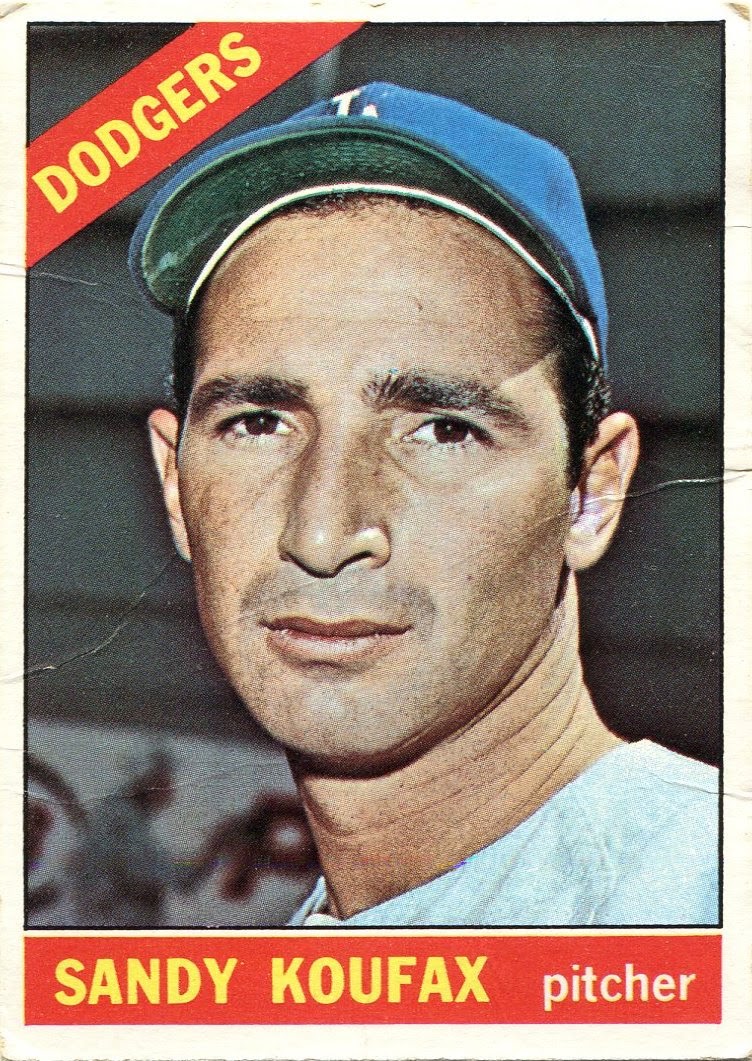 That is, until my dad came home with this one the very next year, another gem from the glass case in Memphis.

Yes, that's a real 1966 Topps Sandy Koufax you see there. If you don't count the League Leaders issue he had the following season (which I don't), this is Sandy's sunset card.

Koufax had to cross a few state lines, but he has a good home here in Chicago. He won't be on the move anytime soon.

I don't know if I'll ever find a better card outside the far reaches of Illinois. But, then again, you never know. Maybe that elusive '52 Topps Hoyt Wilhelm is waiting for me in a card shop in Anchorage as we speak.

When I think of cards in Vegas I think of something that might not be age appropriate.

And nice post. I might have to do something similar to determine which parts of my PC came from (or fell into my hands in) Japan and over here in the US.

Most family vacations included me in the back seat with a stack of pages of Mapquest printouts of every card shop remotely near where we were going. I'd always con my mom into buying a blaster or two for me to open on the way there as well.

For whatever reason cards found on a trip always stick in my mind a little more than the average show finds.

The card shop we went to in Vegas was more of a lame-o memorabilia shop...y'know,a run-of-the-mill card in a frame with an 8X10 picture for 50 bucks...

I'm definitely going back to that shop in Manchester when I go back to the UK in the spring...maybe there will be more cards!!

I came back with a ton of those 'advertising' cards from Vegas a few years back to use as a joke gift. Yeah, that's it.

And your family spending a vacation in the Dells...there's a reason that there's a joke about Wisconsin being "where Illinois spends its weekends."

I've thought often about taking a weekend trip to a random city who's fans wouldn't care much for the teams or players that I like, so then you could find them at the local shops for cheap and in great supply. At least that's the theory...

My family never traveled further than Florida so my out of state card finds consisted of singles from outdoor flea markets.The cards were never in good condition but I always came a way with some decent Canseco and McGwire cards.

What was the name of the card shop in Memphis? Got me curious!