Under the influence of COMC 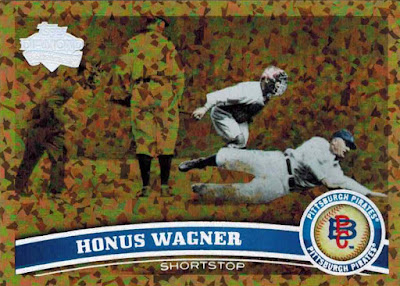 Sometimes I wonder how much influence I truly have over my own collection.

I can't take credit for discovering a lot of the things I currently collect -- a lot of them found their way to me by word-of-mouth (or whatever you call word-of-mouth when it takes place online). Most of my mini-collections are based on others' ideas. A fair amount of my player collections were born out of interesting articles/factoids I'd read in the past. My appreciation for many of my favorite sets were initially kickstarted by the praises of others.

And now, whenever I hear about a new player/set/concept on the infinite ends of the internet, my first reaction is Ooh, I wonder if COMC has any of THOSE? 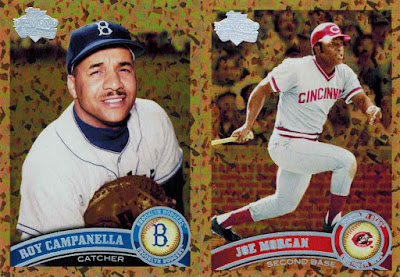 I pulled several of these from packs back in 2011 and enjoyed them, but I don't think I ever really fell in love with them until I started reading blogs. That immaculate term itself -- liquorfractor -- certainly didn't exist in my vocabulary until the blogs came along.

As the trio I've shown thus far might indicate, I throw them into my COMC cart whenever I can these days (especially the legends). 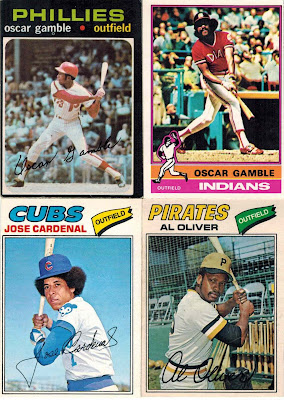 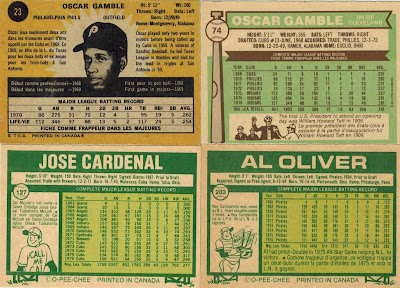 Though 1970s cardboard has long been an obsession of mine, vintage OPC never registered on my radar until recently, and the glorious floating heads of '71 OPC were unknown to me for a long time.

This excellent quartet of OPCs represent new hits to player collections I don't often get to add to, and all of them wound up in my COMC cart for loose change (RIP, Oscar). 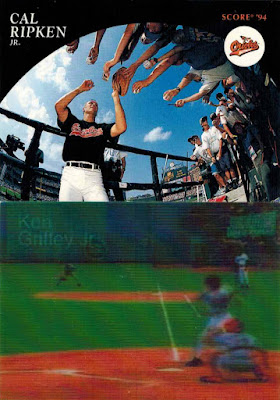 COMC itself is a maze of influence: you'll look up one thing on a whim and, before you know it, you'll have killed two hours with five separate tabs opened on your computer.

I don't remember the exact chain of events that led to these two winding up in my cart, but I'm glad they did -- the Ripken is some kind of Burger King oddball, and the Griffey is a glorious "Video Replay" insert from late '90s Stadium Club. 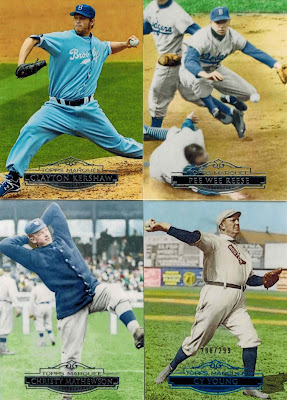 I never clicked on COMC with the intention of buying anything from the one-and-done Topps Marquee brand, but these were too beautiful to pass up for 50-75 cents per. 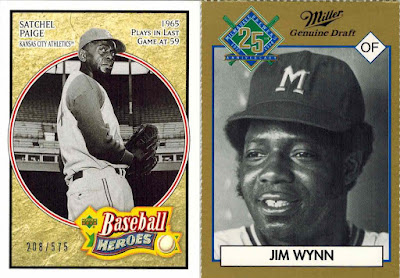 A couple landmark additions to my Short Term Stops collection here (one of my few interests which I'm pretty sure I discovered all on my own).

The Wynn is something I never thought existed: a card documenting the Toy Cannon's brief 36-game stint with the '77 Brewers (his sunset season). The Paige, on the other hand, has been on my radar for a long time now, a tough find since it's numbered to 575 copies.

But now, thanks to COMC, I own what is (as far as I know) the only card of Satchel Paige with the A's, a team for which he pitched one game in 1965 as part of a publicity stunt at the ripe age of 59. 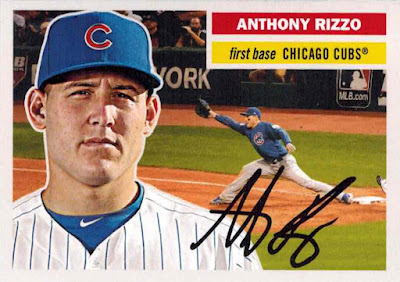 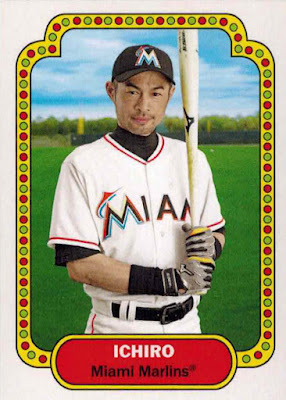 I sure wouldn't have known about these online-only "Throwback Thursday" Topps sets without various postings on the blogs and Twitter. 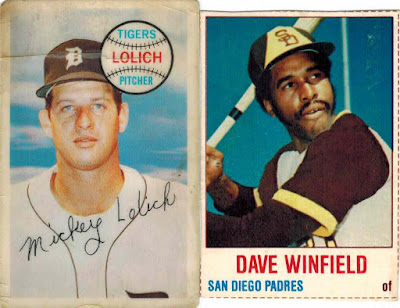 It's not a COMC post without a couple cameos from Kellogg's and Hostess. 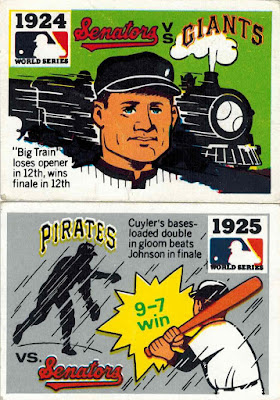 My Secret Santa can take all the credit for these falling into my COMC cart. 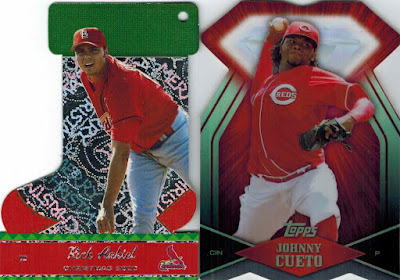 Speaking of Santa, I had no idea baseball card ornaments ever existed until recently (brought to you by Pacific, of course).

The Cueto is a "Diamond Dig" insert from that brief period of time where Topps' online promotions were actually kind of cool -- I never unlocked one of those special inserts at the time, but if it's any consolation, that Cueto cost me just 75 cents. 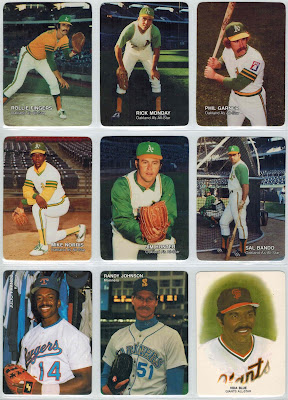 Mother's Cookies were solely a west-coast promotion, which means they almost never turn up here in the chilly Midwest.

But thankfully, a lot of COMC's sellers seem to be located in the west (as well as COMC itself, I think), which means that these terrific Mother's cards can be had for pennies on the dollar for us poor Midwesterners. 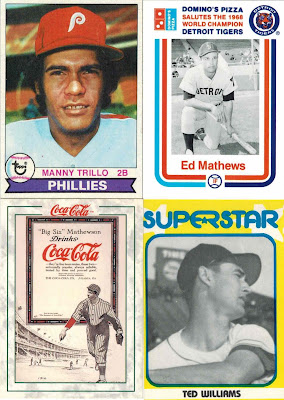 More random oddballs from the COMC archives, including hits from a number of your American fast-food groups (the Trillo is from the Phillies' Burger King set). 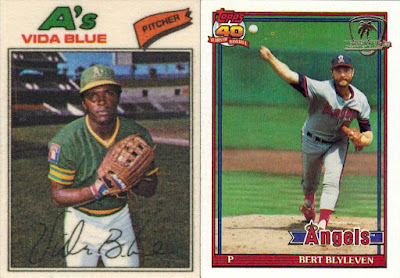 A Vida cloth sticker and my very first Desert Shield card (of a HOFer, no less). 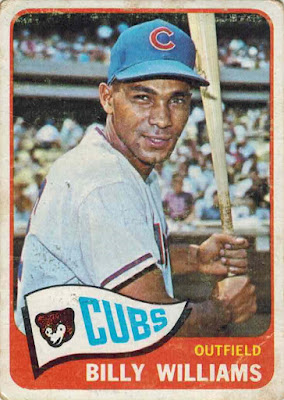 While I mostly use COMC to pick up oddballs and parallels I'm not likely to see anywhere else, occasionally I'll stumble upon vintage deals that are just too good to pass up.

Like this one, which I was ecstatic to find for two bucks since Billy Williams cards tend to carry a premium here in the Chicago area. 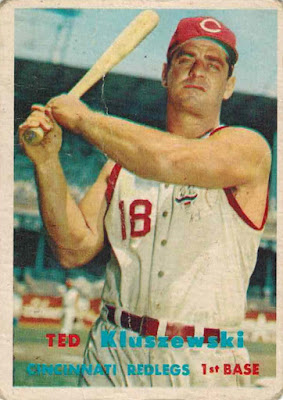 And finally, here's a card I was just plain sick of not having in my collection and a former member of my "Keep Dreaming" want list: the '57 Topps Ted Kluszewski Gun Show.

The story goes that Big Klu's arms were too big for the sleeves of his Reds jersey, so he simply cut the sleeves off, thus displaying the massive biceps that would make his '57 Topps card the stuff of baseball legend. At eight bucks, it's my priciest COMC purchase to date -- worth every penny, if you ask me.

And so there's another COMC haul, one that displays the melting pot of ideas and concepts that over the years have combined to form the hurricane that is my baseball card collection.
Posted by Nick at 6:57 PM

Great stuff here!...save some money for the card show next weekend!!

COMC is truly an incredible thing. There are so many possibilities and different cards you can get. I love the vintage you got, especially that 1965 Billy Williams which you got for a steal. Nice cards!

Nice haul! I had no clue that Dominos made cards. Also, speaking of Klu's, that 57 Topps is a beaut!

The Dodgers really need to bring back those Brooklyn throwbacks, but do them right: satin and high cuffed.

Between seeing things we never even knew existed--and then needing them--and people sending us stuff in trades, we really don't keep much influence over our collection.

Satch, by the way, was probably still able to dominate at that age. And the stretch on that Rizzo is a thing of beauty.

Diamond Dig diecuts and 2011 Marquee cards, this post is after my 2011/12-based collecting heart.

"COMC itself is a maze of influence: you'll look up one thing on a whim and, before you know it, you'll have killed two hours with five separate tabs opened on your computer." That's pretty much my online life, too.

Great cards here-the TBT Rizzo will appear in my next Sports Card Tour post. And if you're going to spend $8 on a single card, the 57 Klu is a great choice!

As usual... lots of great stuff. 70's Kelloggs and Hostess will always catch my eye. But today... I'm gonna comment on the sweet looking 1971 OPC Gamble. Love that cardback!

Great stuff as always Nick! Love the liquorfractors and ‘71 Gamble in particular.

Great post! I often wondered if I was the only one who does this stuff, but I find I'm not alone.