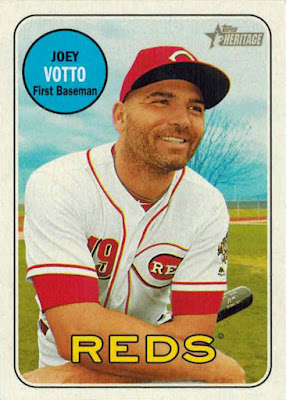 I don't remember much liking 1969 Topps as a young collector.

It just seemed so...dull. A moon-like dot? A bold team name? And that's it?!?! Why collect this stuff when you can hoard the disco borders of '72 Topps? Or the dual-colored pop of '75? I never gave '69 Topps much of a look, especially with all the other cardboard bells and whistles I had left to discover as a teenager.

But in recent years, I've come to appreciate (one might say even love) the brash minimalism of '69 Topps -- perhaps it just comes with the territory of growing older, but here in my mid-twenties, I'm more apt to appreciate hushed beauty rather than in-your-face fervor. 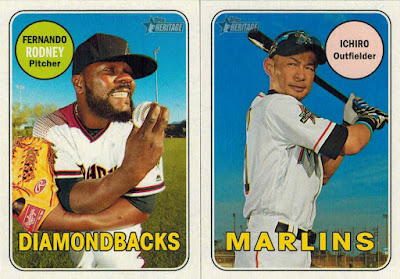 It's for this reason that I was excited for the '69-styled design of 2018 Topps Heritage, especially after last year's burlaps which I doubt I'll ever come around on.

I was so excited, in fact, that I went out and bought a slew of Heritage from my local Target this afternoon -- this coming after my dad had already brought me a fair amount of the stuff from his Target earlier in the day. 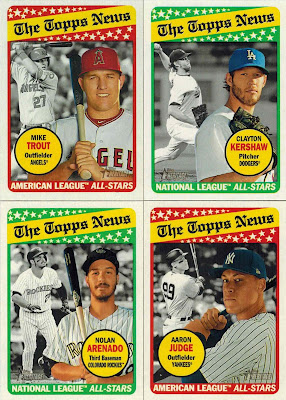 Over the years, Heritage's biggest selling point for me is the sole fact that the packs are damn fun to open, and this year keeps with the trend.

Many of the nooks and crannies of the original '69 checklist are appropriately honored, including these excellent All-Star cards, which remain among my favorites in the annals of vintage Topps. 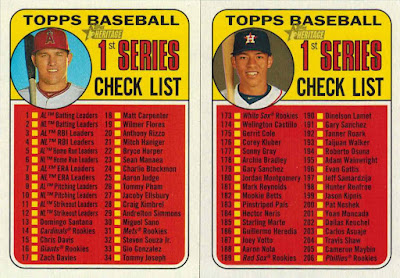 Even the checklists are fun -- now that's a tough stunt to pull off. 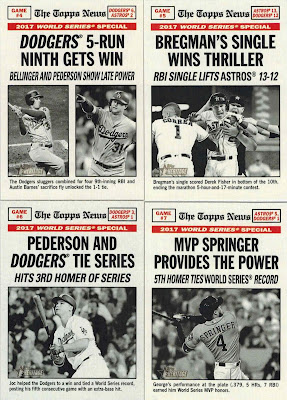 Every year, as I analyze the Heritage checklist in the days leading up to its release, one specific thing manages to jump out at me -- a specific player choice, a specific insert, a specific design, etc.

These World Series cards were the chosen portals of excitement for 2018. It's easily my favorite of the older World Series subset designs (has newspaper print on cardboard ever not been awesome?) and I was ecstatic to see it replicated with flying colors (or at least black-and-white flying colors) in this year's Heritage.

For as long as I've lived, the Fall Classic has been the center of the sports calendar, and these cards remind you why. 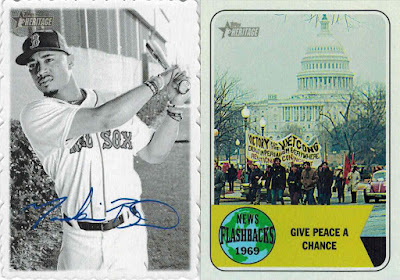 The inserts are solid in this year's Heritage as well: though I'm a little sick of seeing the '69 Deckle Edge design at this point (made even more jarring by the fact that this year's edition is inflated to full-size), I won't turn down a new Mookie for the binders.

I build the News Flashbacks insert set each year, and though I'm sure I'll be able to find them all in one fell swoop at the card show in a couple weeks, it's nice to get a head start. 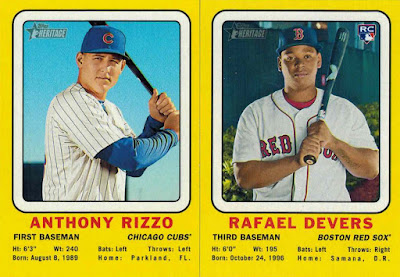 Though I'm not sure if they're based upon an actual vintage Topps series, these retail-only "Collector Cards" inserts are terrific. 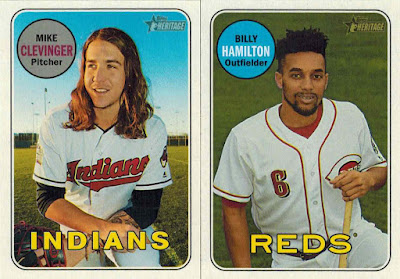 But as I've already hinted at in this post, this year's base set is fantastic and makes the originals proud.

There were a few years there (2012-13ish) where Topps didn't seem to actually have anyone on staff who didn't know/didn't research what the actual vintage checklists looked and felt like. As a result, you had a couple Heritage sets that felt entirely like painful, low-rent knock-offs of famous designs.

Somewhere along the way, Topps righted the ship -- this year's Heritage mimics the original best it can, even throwing in a few of '69s trademark capless shots to prove it. 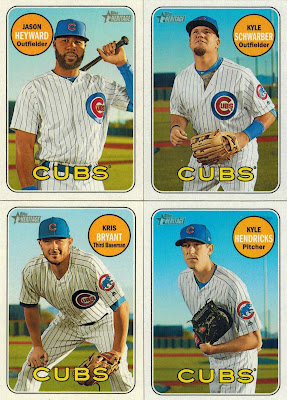 Cubs! -- including a Kyle Hendricks SP, which I'm glad I pulled because you wouldn't believe how much those things get marked up around where I live. 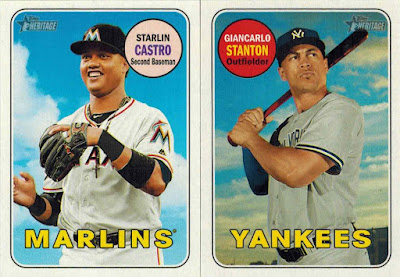 Heritage usually manages to sneak some (airbrushed) first looks at guys in their new uniforms, like these two stars who were traded for one another this offseason.

I've heard rumblings that Castro might already be on Miami's trading block, so with a little luck maybe that'll turn into a coveted zero-year card (crossing my fingers!). 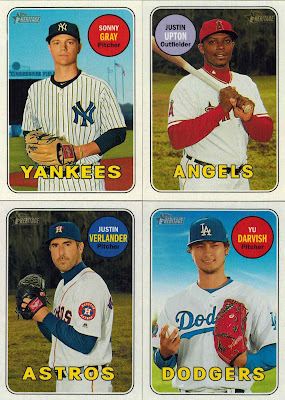 Just like 2018 Flagship, Heritage offers glimpses of last year's late-season trades, which are still fresh and exciting because almost all these guys were unceremoniously shunned by 2017 Update.

Sonny Gray's been a Yankee since last July, and the fact that he didn't get a Yankees card until the following March is egregious. 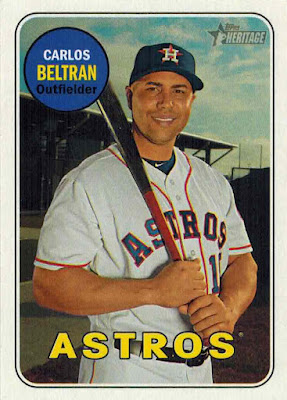 All in all, Topps has another hit with 2018 Heritage -- even though I have a card show coming up, it's gonna be tough to keep me out of the Target card aisles until then.

And even after all the dust had settled, Topps threw in another little surprise which I wasn't even expecting: a true sunset card for Carlos Beltran, with full career stats on the back. A proper send-off for a proper guy by a proper brand.

Well, this just sold me on Heritage, even though I was going to get some anyway. Hopefully it'll be easier to get my hands on retail wise than last year.

Glad you got a "News Flashback"...hopefully a lot more at the card show in 2 weeks!

The subject line made me laugh... "We cannot have a triumphant card set unless we get Eddie Van Halen!"

The yellow-bordered Target exclusive cards were a major surprise to me. They're based on the cut-out cards which came on the packages for Transogram figures in 1969.

The all-star and World Series subsets are my two favorite things about this set. Great designs.

I do like the All-Star and Topps News cards. You seem to do well with your pull and some of those cards show a little life in them - as much as possible in still shots. Great post. Thanks.

What do you think of the Walmart exclusive Magic Rub-offs?