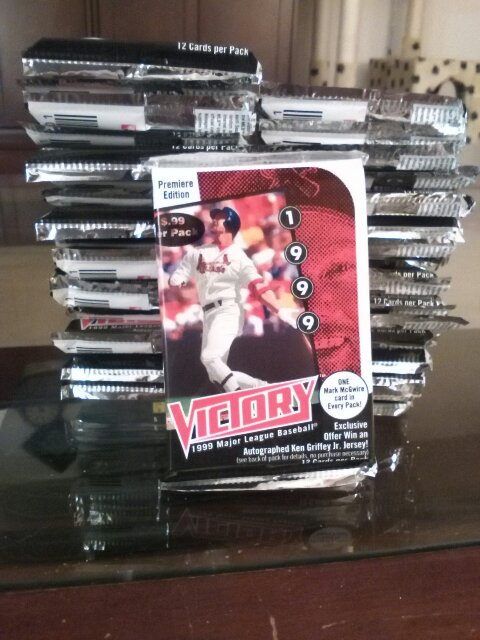 At some point last week, I was stricken by an affliction well known by all card collectors: the pack-busting itch.

But I quickly found that this wasn't the standard itch. I didn't want anything on the shelves of my local Target. No, this was an unfamiliar strain of the disease -- I wanted something different, something from the past, something you don't see every day.

I started thinking of sets that have all but disappeared from the dime boxes of 2018, and it wasn't long before a specific brand popped into my head: Upper Deck Victory. I have an insanely difficult time finding Victory singles, and the idea of busting whole packs of the stuff just about made me swoon.

And much to my surprise, it wasn't long before I found an auction with my name on it: 35 unopened packs of '99 Victory, mine for a little more than half the price of a blaster. 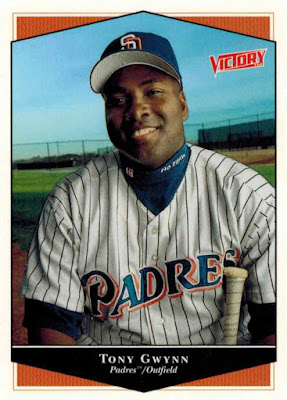 Later editions of Victory included various inserts and parallel sets, but this is the one that most aligns with my collecting philosophies: a robust 470-card base checklist, simple design, no inserts, no parallels.

Though I don't remember opening much of it at the time, Victory was a brand of my youth. And as a result, a lot of the cards I received in these packs featured players I grew up admiring, guys who still conjure fond memories of childhood.

Thus, saying opening 35 packs of a set like this was a joy would be a massive understatement. 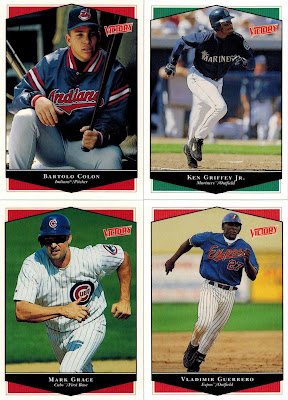 Here's just a few stars of my childhood included in the '99 Victory checklist -- and, better yet, each of these were new to me, doubly exciting considering I can't remember the last time I pulled a Mark Grace I needed from a pack of cards.

And though I can't say for sure, I'd bet that Bartolo Colon is the last active player featured in this set (was 1999 really nineteen years ago?). 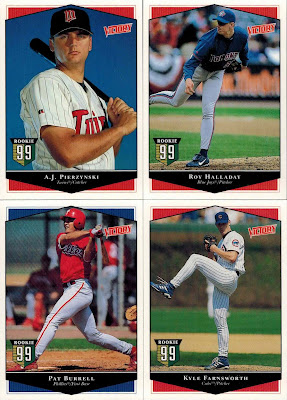 Also present were a hefty amount of rookies or near-rookies of guys I'd later grow up watching (RIP, Doc). 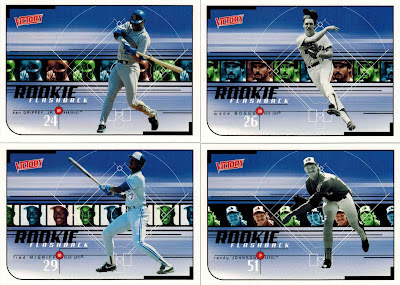 While '99 Victory doesn't feature any inserts, there are a handful of subsets sprinkled throughout the base checklist.

My favorite of these is easily the Rookie Flashback series. which features stars of the time as they looked in their baseball youth (Randy Johnson as an Expo!). 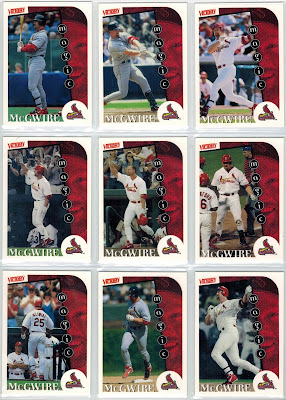 He's on the cover, he's in all the subsets, and heck, he even has an entire chunk of the checklist all to himself -- this "McGwire Magic" series, which came one per pack and thus nearly doubled my meager McGwire collection in one fell swoop.

Little did we know... 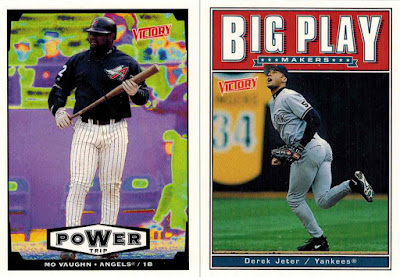 A couple of Victory's other subsets, including Mo Vaughn, who especially seems to take to that psychedelic design. 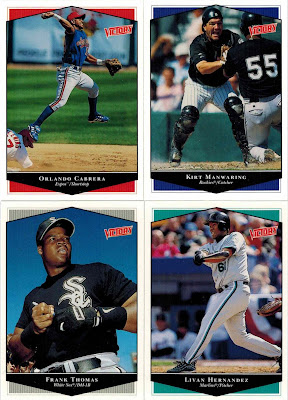 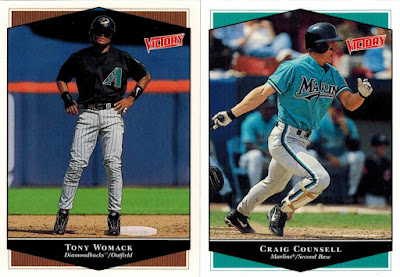 One of the many reasons I was so excited to open these packs was that it gave me the opportunity to add to a lot of more unsung player collections I don't often get to add to these days.

I'm talking guys like Tony Womack and Craig Counsell, both of whom have long had a space reserved in my binders. I even have a Womack D'backs t-shirt buried in one of my dressers somewhere, which confused a lot of my high school friends since none of them knew who Tony Womack was when I wore it to class.

It's the inclusion of the Tony Womacks and Craig Counsells of the world that makes UD Victory the kind of set I'd like to see today. 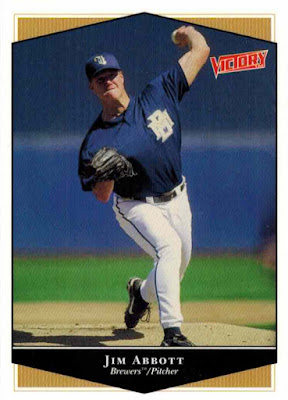 But I'd be lying if I didn't admit that part of my motivation in buying these packs was the hope of securing one long-desired card: the very Jim Abbott you see above.

This is, as far as I know, one of only three major-brand cards in existence to feature Abbott as a Brewer, and the only one I didn't already own. As a result, it'd been sitting on my Dime Box Dozen list for the better part of six months now, and given my fandom of Jim Abbott, Short Term Stops, and sunset cards (all in one!), you can see why I was praying to the cardboard gods that the elusive Abbott would be somewhere in those 35 packs.

Thankfully, he was, and I didn't have to sweat it out all that much -- I think he fell out of the seventh or eighth pack or something. With Abbott harpooned, I was able to breathe and really enjoy the rest of the Victory experience, which I assure you was easily worth every penny of the half-blaster I paid for it.

Thus, the pack-busting itch was scratched -- only now, given the amount of fun this V-Day was, I'm left with this looming desire to explore more of the cardboard of my youth...so it goes.
Posted by Nick at 6:29 PM

What a great set.

Of all Halladay's rookies, that one might be my favorite.

Jim Abbot was a Brewer? I dont think I ever knew that; I sure didn't see any of his Brewers cards until now.

Yeah, this is definitely a '90s child set. I've never understood the point of these and barely look at my Victory Dodgers.

With Beltran retired, Bartolo is indeed the last active player from that checklist.

Glad you got some nice cards from the packs. Too bad a set like this doesn’t exist now. I’m hoping that new Topps set (it might have been called Ballpark or something) will be like it.

That ocab is glorious.

@Chris...he was covered in the Short Term Stops series. http://baseballdimebox.blogspot.com/search?q=Brewers+short+term+stops

I definitely have a good bit of Victory cards in my collection. The set obviously isn't perfect, but for a lower end release I thought it was fun. It would blow the likes of Opening Day right out of the water.

There's a bit of this set in my tradeables box. A couple team cards, and McGwires. I keep thinking someone is going to want them at some point. They stand out from a lot of the rest of the stuff in there.

I've never been a fan of Victory, but I completely understand the itch. I've got it myself. It's suppose to rain this weekend, which means I won't be able to walk around the flea market. Guess it's time to bust into some 1992 Fleer boxes recently donated to me.